Late last July, I think just after getting back from our honeymoon, KRock and I took one of our first Married Couple Hikes up through the Mount Hood wildflowers to the ridge above McNeil Point (trail description here). The snow’s been melting out crazy early this year – like, terrifyingly, “it’s going to be fire season hell” early – and last week I heard that the the scramble route to McNeil Point was open. I had a free day Saturday, so my dad and I headed up.

For the first couple miles, the trail definitely felt like summer. 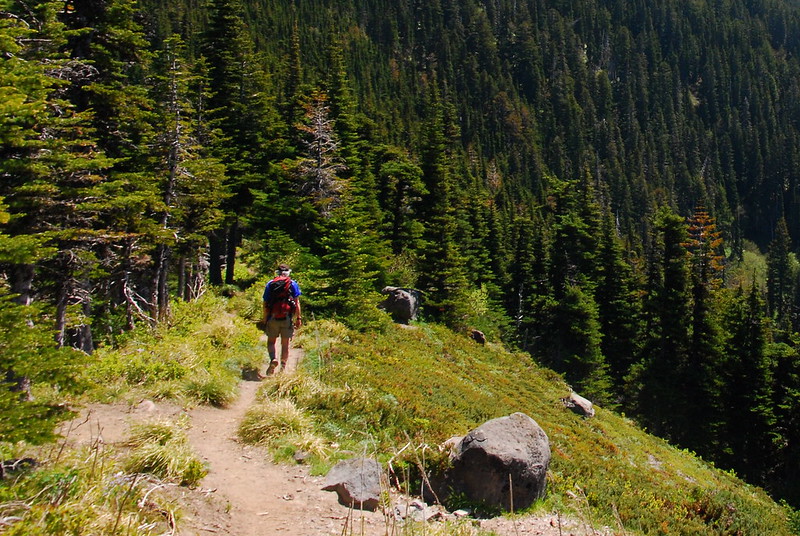 Then, after a few miles and maybe 1300 feet up, things jumped immediately back to spring. 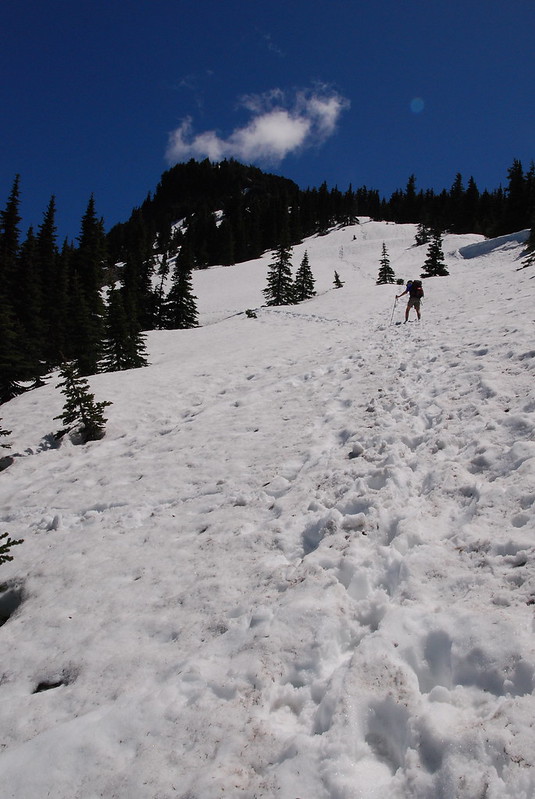 The snow went from nothing to five feet deep in just a few minutes. Luckily, this was only maybe a quarter mile from the spur trail for the scramble route, which we knew to be snow free.

I’m not usually a fan of trail shortcuts. Visiting unspoiled wilderness risks, “by way of sheer ontology,” destroying the unspoiledness you were there to see in the first place, and sticking to trails, especially in the more fragile areas, at least minimizes the damage. But I might make an exception here, given the somewhat strange way the official trails are constructed in the area. The official trail (red) reaches McNeil circuitously, jotting way north to go around the steep face of McNeil Point to return south to the McNeil shelter, while the scramble route goes straight up (yellow). 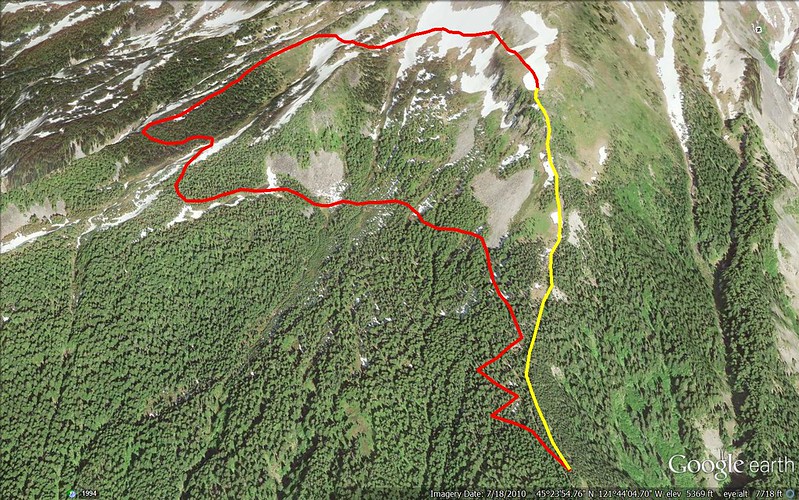 The route also avoids tromping through too many fragile meadows, instead sticking to the generally barren ridgeline. It gains quite a bit of elevation in a little less than half a mile, but, as usual, the going is so much fun you don’t really notice yourself working. 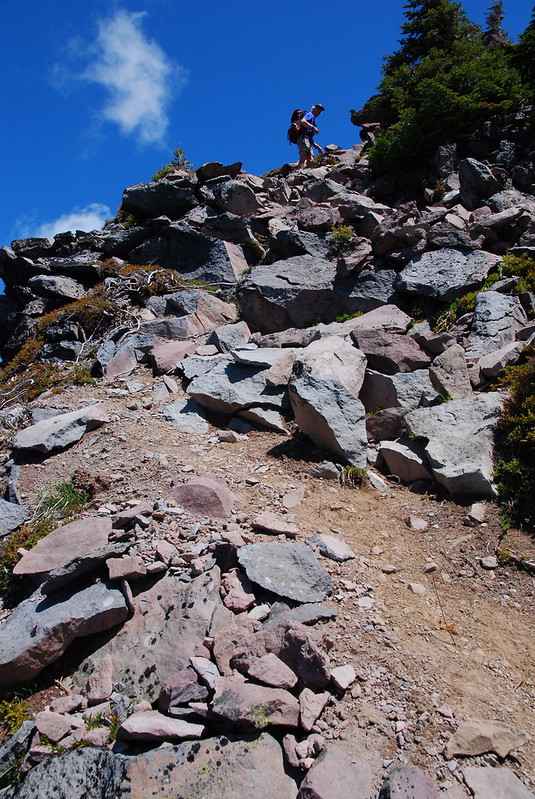 After what seemed like just a few minutes, we got to the shelter, and there were a couple guys having lunch. 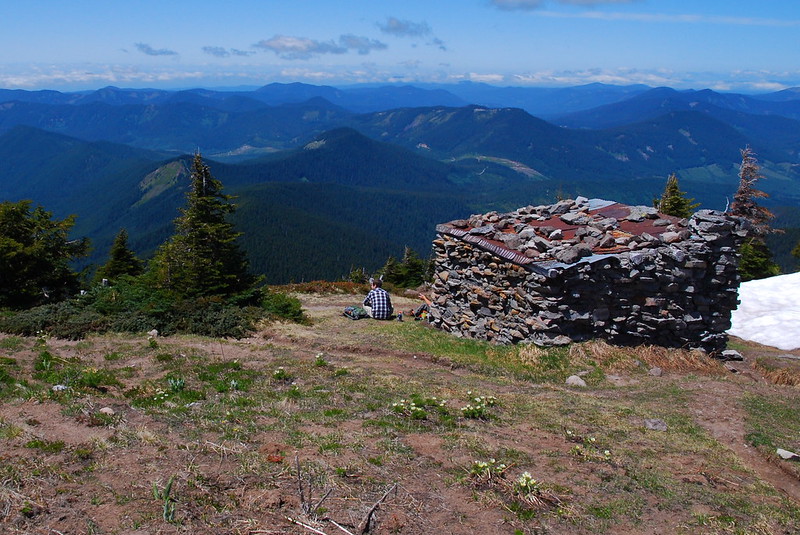 Not wanting to interrupt, we kept going up the ridge, which was still mostly snow free. 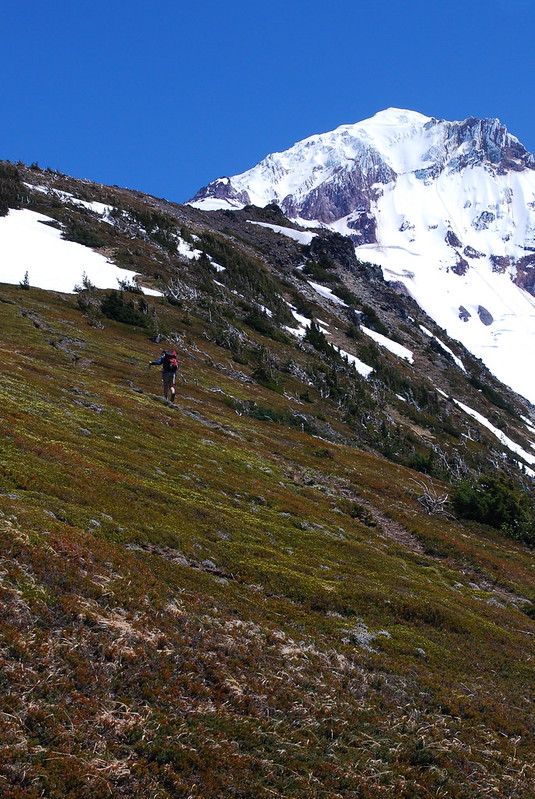 Last year, this trail – which gains maybe a thousand feet in considerably less than a mile – almost killed us. I was still moving pretty slowly this time, but never really felt too tired. I like how that works. Here’s the view looking down from a couple hundred feet up. 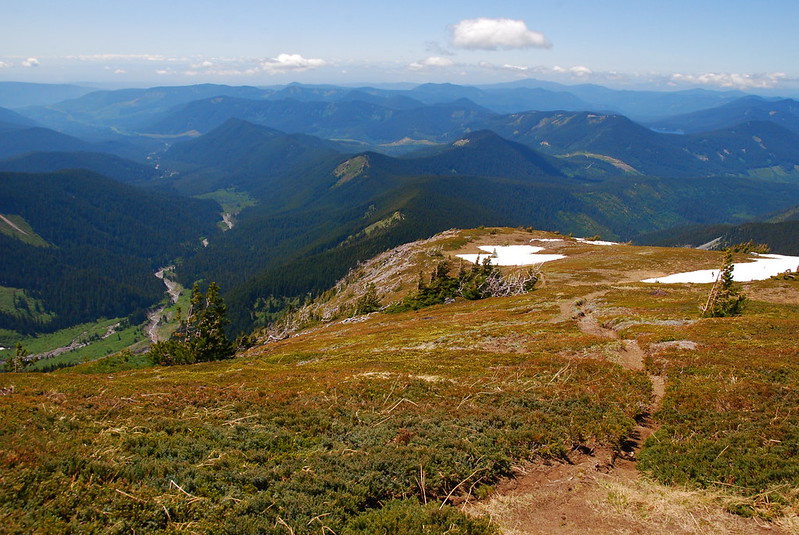 I just love the view of Hood from this side.

And the rocks, across the Sandy Glacier on the upper reaches of Yocum Ridge. 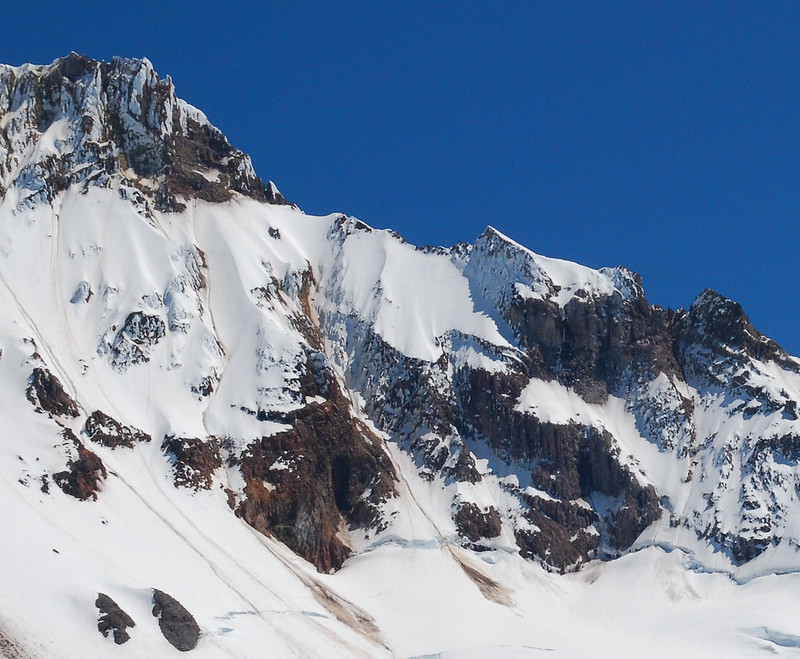 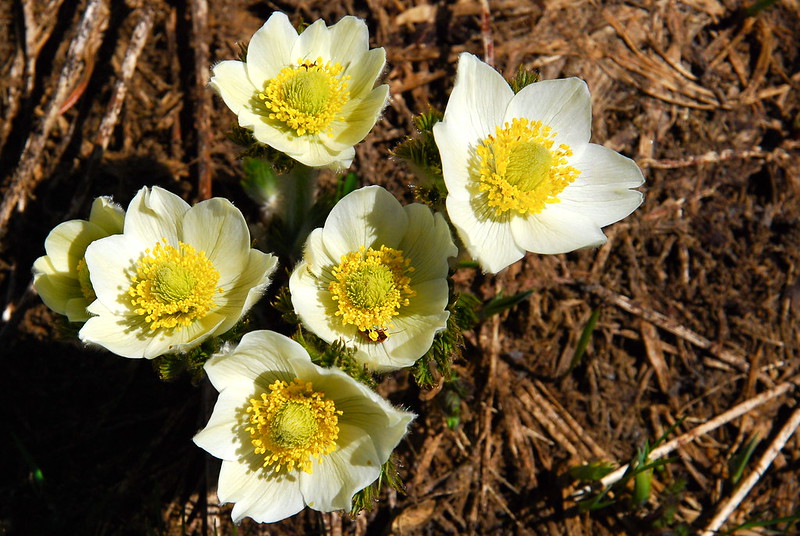 I was a little confused by this at first, as I didn’t remember even seeing remnants of these guys last time we were up. Apparently, though, they only flower for a few days or maybe a week after the snow melts. Then they become everyone’s favorite, Hippies on a Stick! Here are the little guys all grown up, from last July: 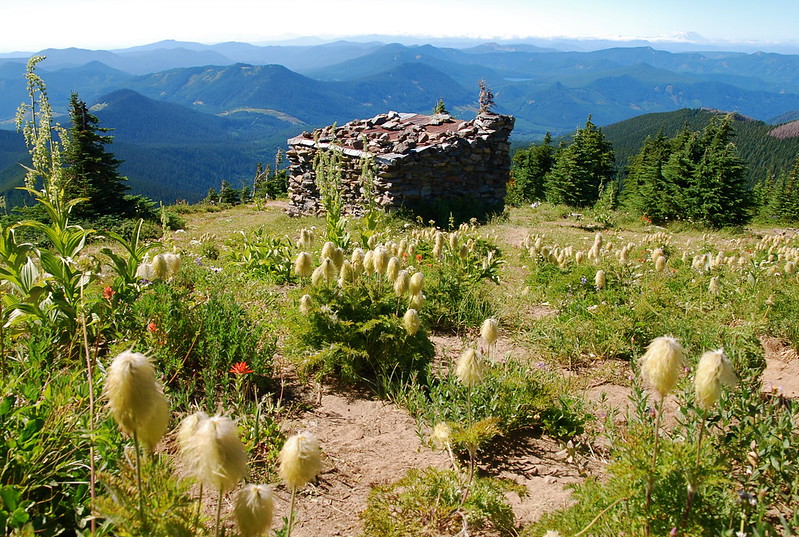 After lunch, some beer, and some grudging sunscreen, we made it to around 7000 feet, to this fantastic campsite under a weirdly shaped rock. If the weather were good, this would be an incredible place to sleep. 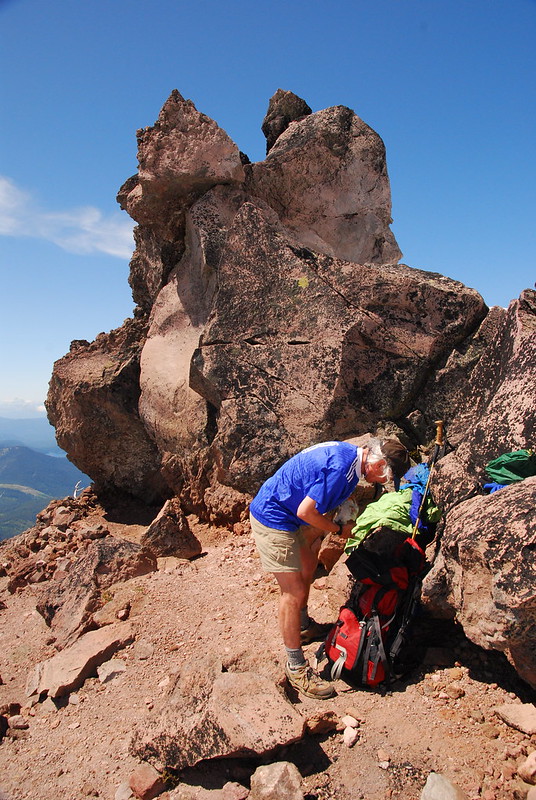 Looking across the foot of the Glisan Glacier at Mount Adams. 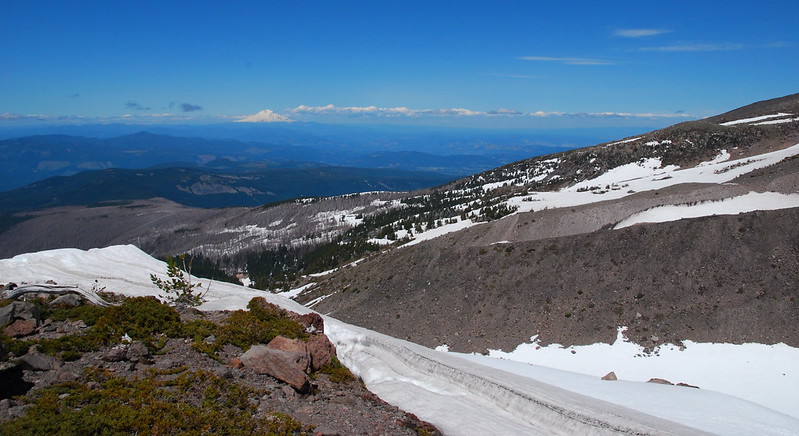 Adams again, with trees burned in the 2011 Dollar Lake Fire in the foreground. I wonder how much more of that we’ll be seeing next year. 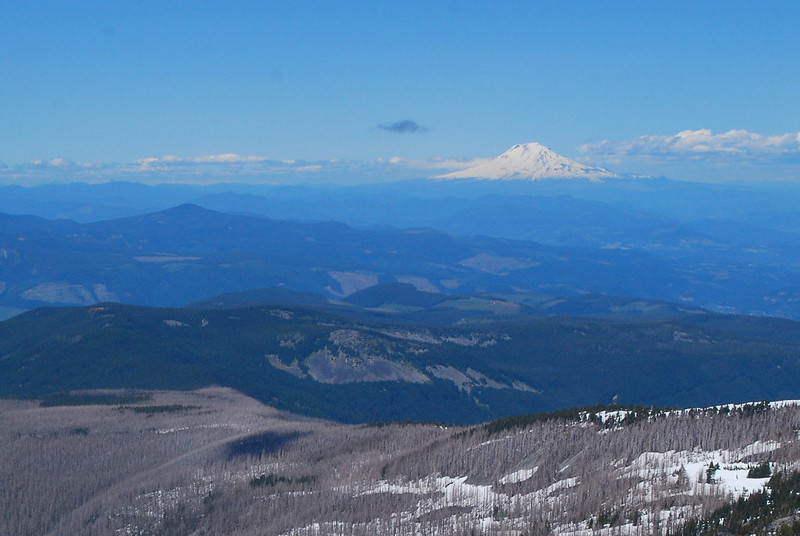 Adams was pretty sociable, but St. Helens only came out occasionally to say hello. 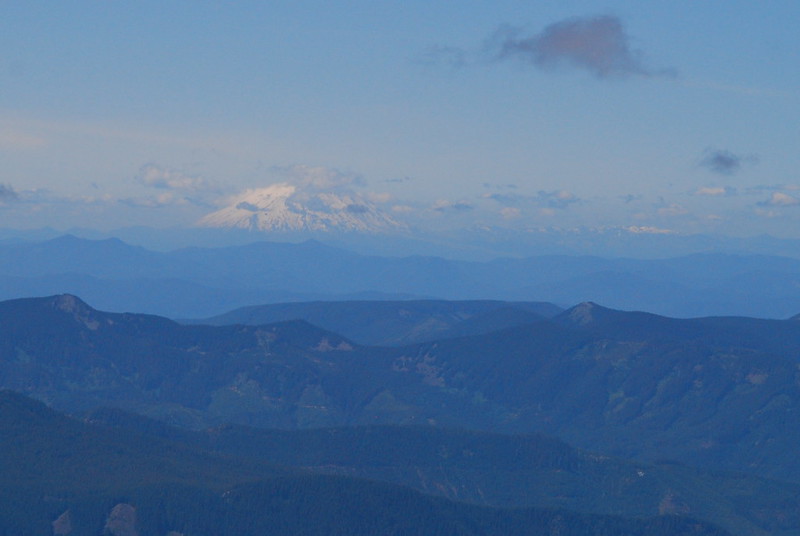 Ravens playing on the rocks above us. 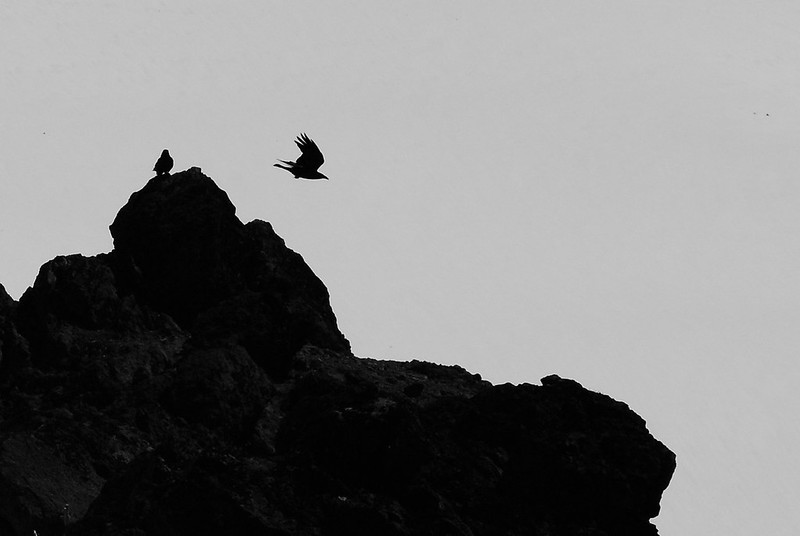 On the way back, we jogged right (north-ish), then glissaded down a couple thousand feet down toward the trail proper. 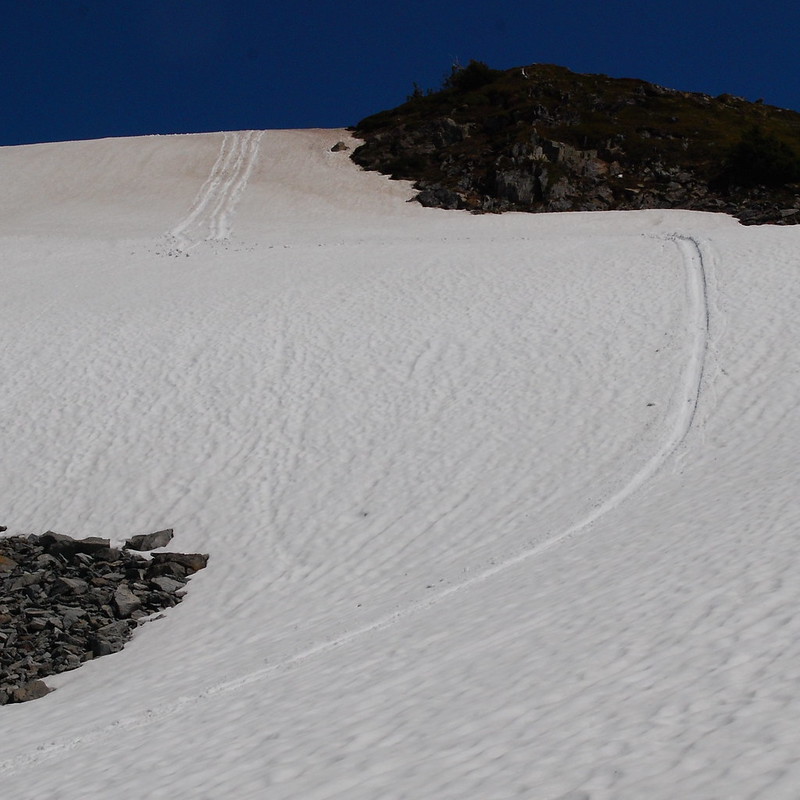 While the scramble route is mostly open, the actual trail is still under quite a bit of snow. 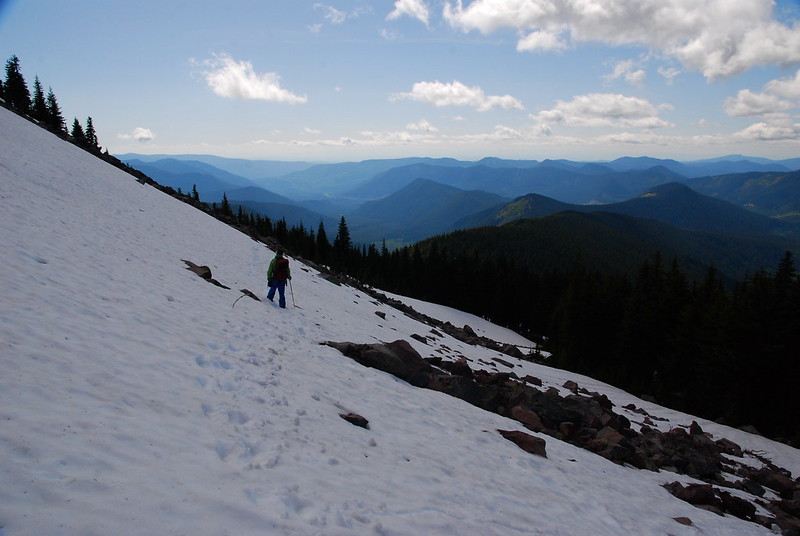 Here’s around the same spot last July. Funny how much difference a couple months can make: 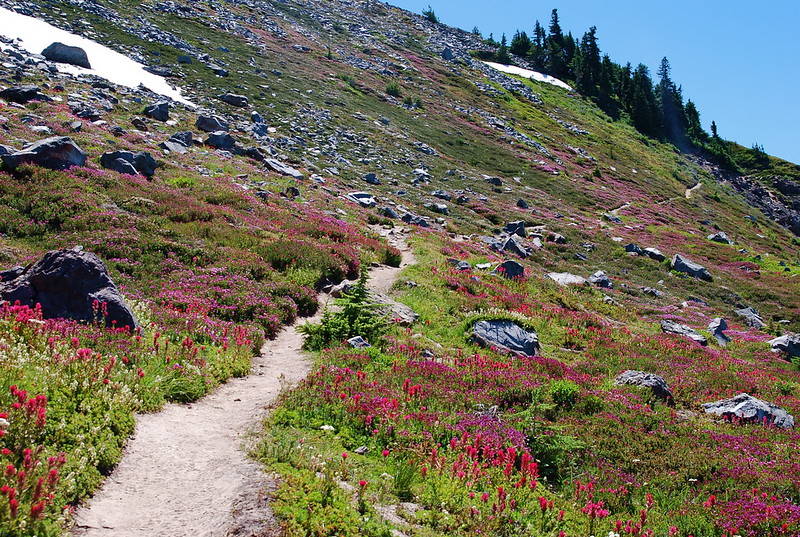 After getting back onto solid ground, it was just a pleasant walk through the woods. Here’s the view looking over at the waterfalls off Yocum Ridge and down on the Muddy Fork. 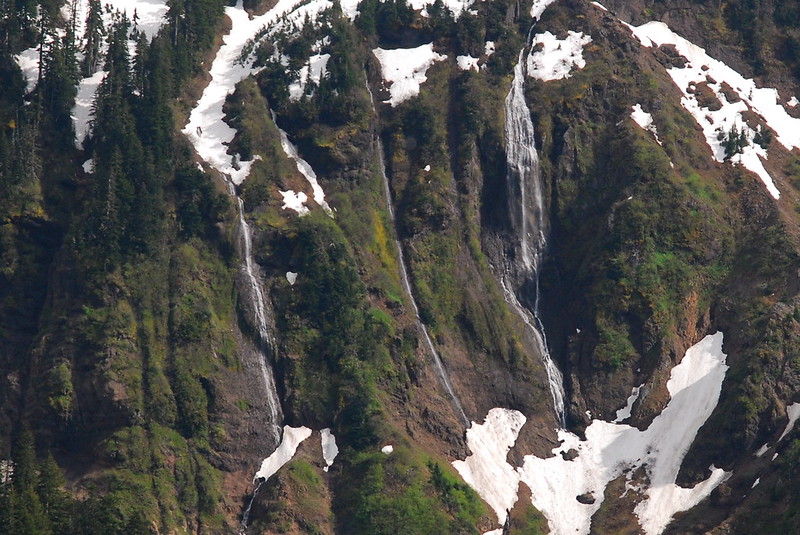 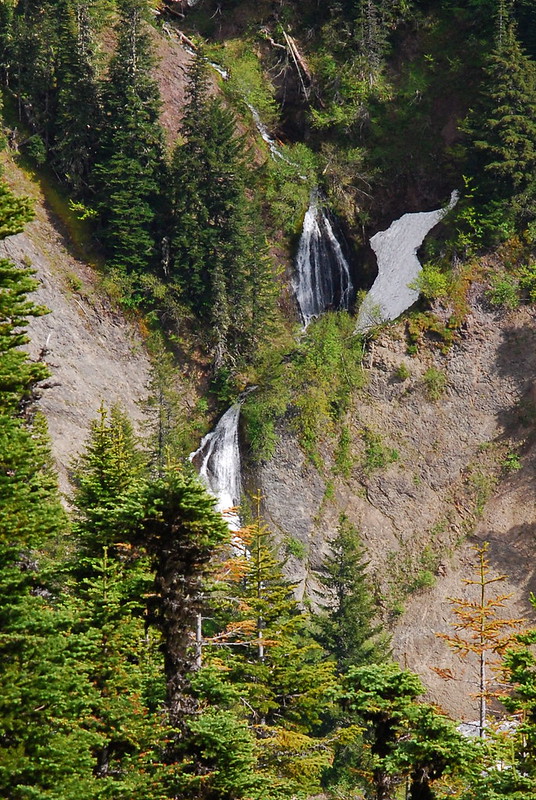 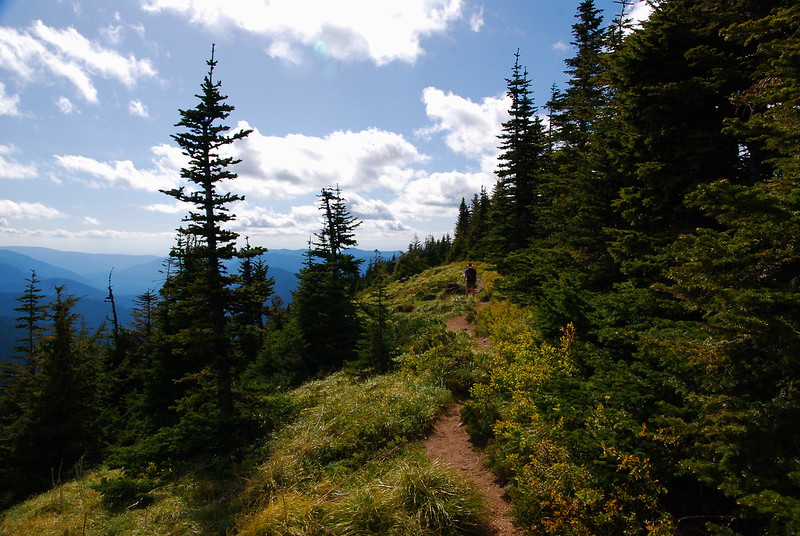 Looking back, the clouds had started to move in around Hood. Maybe that wasn’t such a great campsite after all… 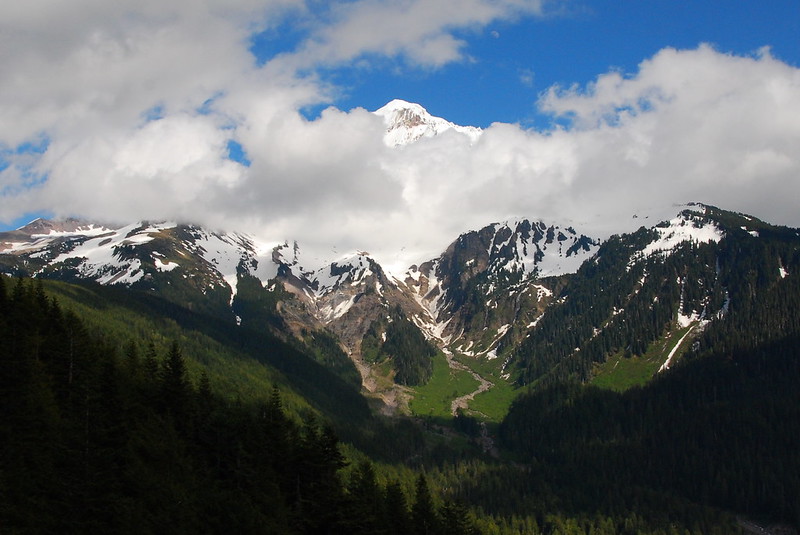 We went back via Sullivan’s Cutoff and Bald Mountain, where the flowers were really popping. 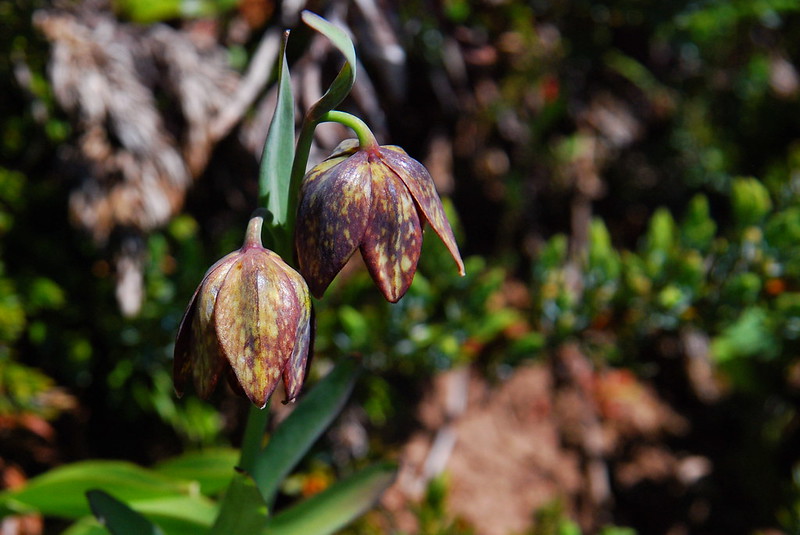 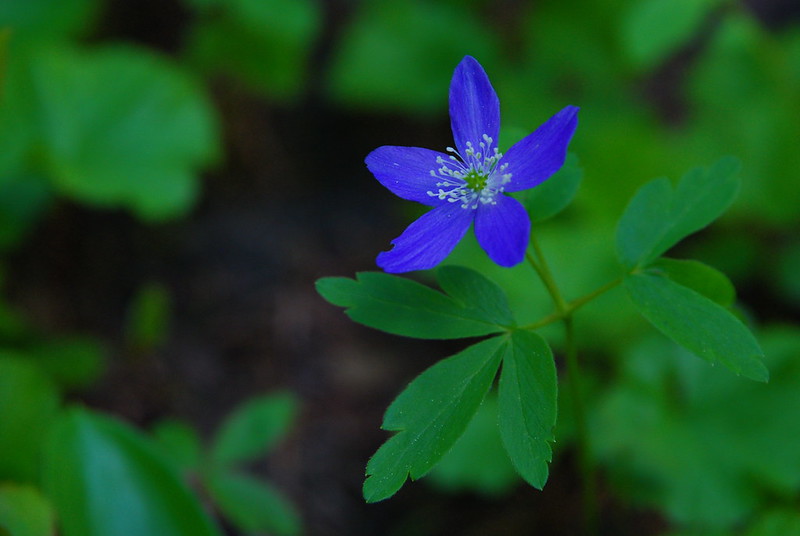 Some yellow stuff I can’t name. 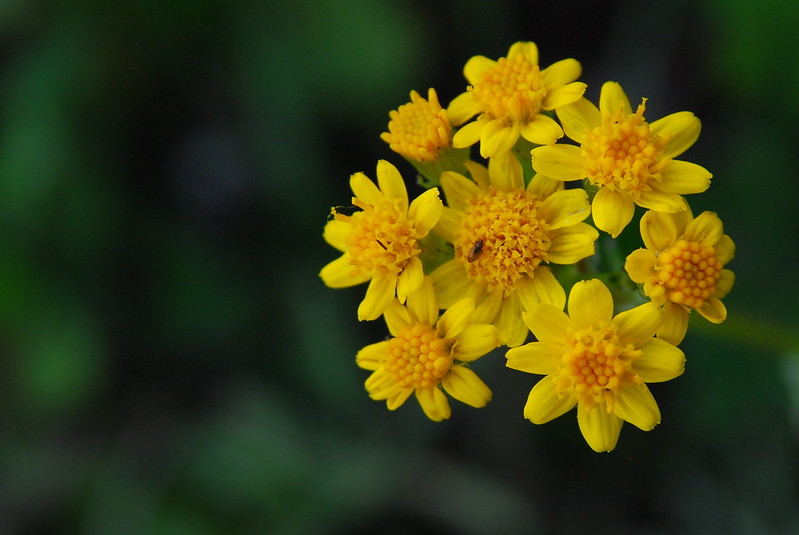 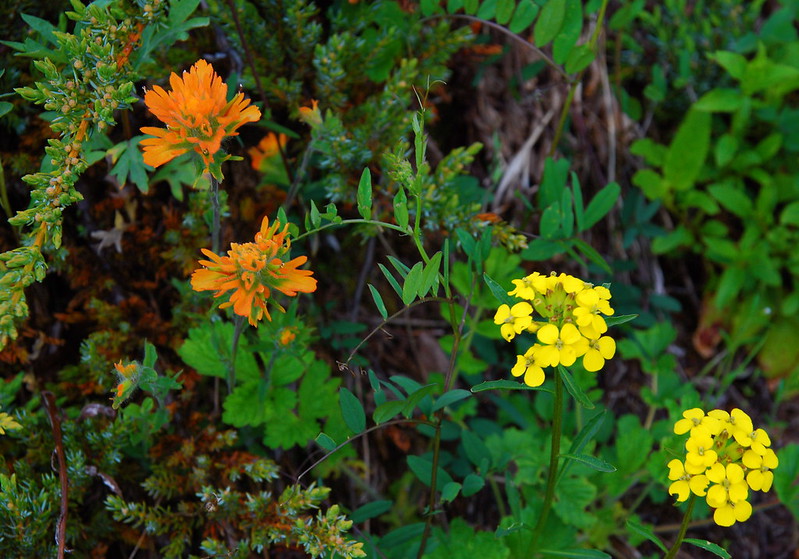 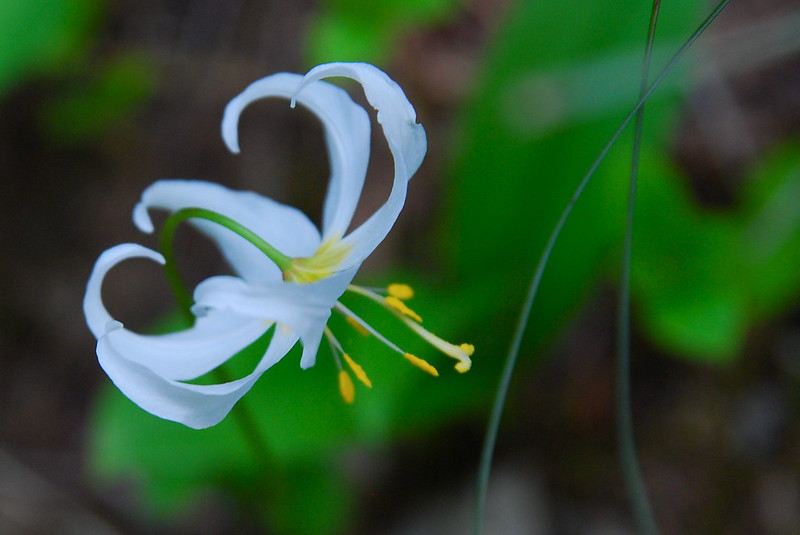 Family photos, just before heading back to the car. 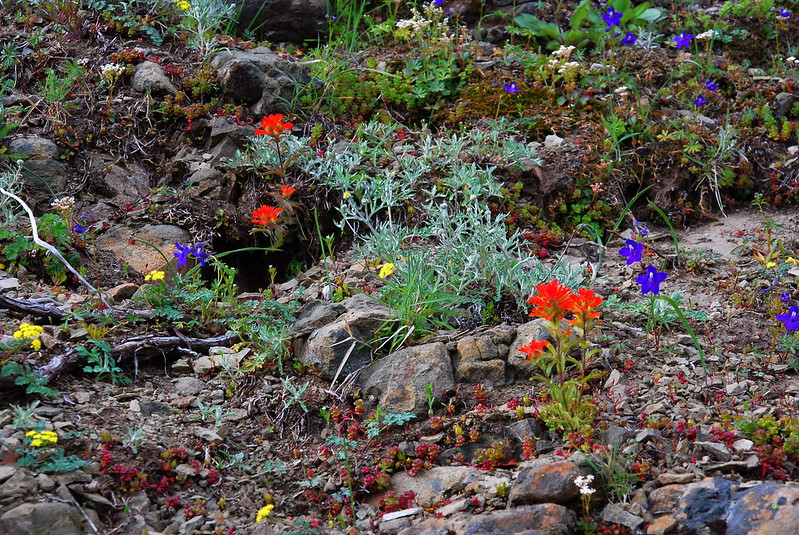 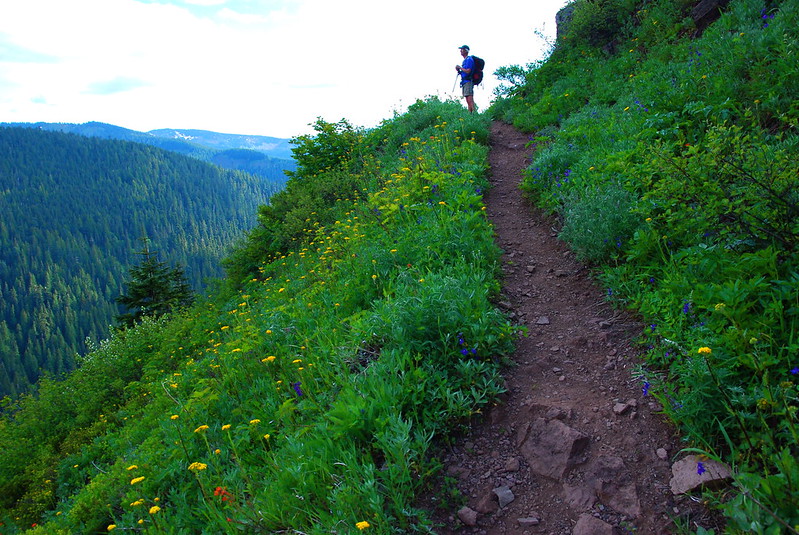