We wake in the rebuilt ruins of an ancient town. This was all invisible to us in last night’s dark, but today, just looking out the hotel window, the hillside’s full of holes, old boarded up mines. Old windows to another time.

We eat at a restaurant downstairs, just past the slots. Chicken fried steak and some sort of scramble, tons of shitty coffee. The tables are dark and dusty, sturdy in that way that nothing is anymore, in a way that makes them feel permanent, as old and worn as the hills.

We check out and shuffle down to the old town. You already know Tonopah’s story: silver was discovered; it made a few men rich; then, just as quickly, it was used up and the town began to die. The special thing about Tonopah is that the town never completely went away.

When place was founded in 1900, the main metropolis—if you can call it that—was Ballarat, California, which most people now know as Charles Manson’s main hideout. But Ballarat was already fading in 1900, and several silver strikes to the east—here, and in the Bullfrog mines near Rhyolite—pushed it over the edge. A thick stream of settlers began to arrive, and at its peak, just two years later, the population grew as high as 5000. They got a Post Office, and a paper, The Tonopah Bonanza.

But the thing about mines is that they get used up. By 1920, the population was down to 1500. Ten years later, the price of silver fell by half, and the place was on its way to gone. It limped by on a few stray claims until 1957, when the federal government built the Tonopah Test Range thirty miles to the southeast. The Range flourished throughout the Cold War, as a nuclear stockpile and testing site, and Tonopah lived off its scraps, providing services to workers and their families. It still does.

There’s this myth about Tonopah that it’s sort of creepy, full of cartoon ghosts, spectral cowboys gamely reenacting the west. But as we walk through the city to its old cemetery, it feels not so much spooky as impossibly sad.

The tombstones here represent Tonopah’s best decade, from 1901 to 1911. The graves filled as the mines emptied, with cases of pneumonia and plague, men crushed in collapses, burned in a colossal fire. And children. An astounding number of children. The first grave I come to is of an eleven-year-old boy, Thomas Lydon. He died of a gunshot wound. 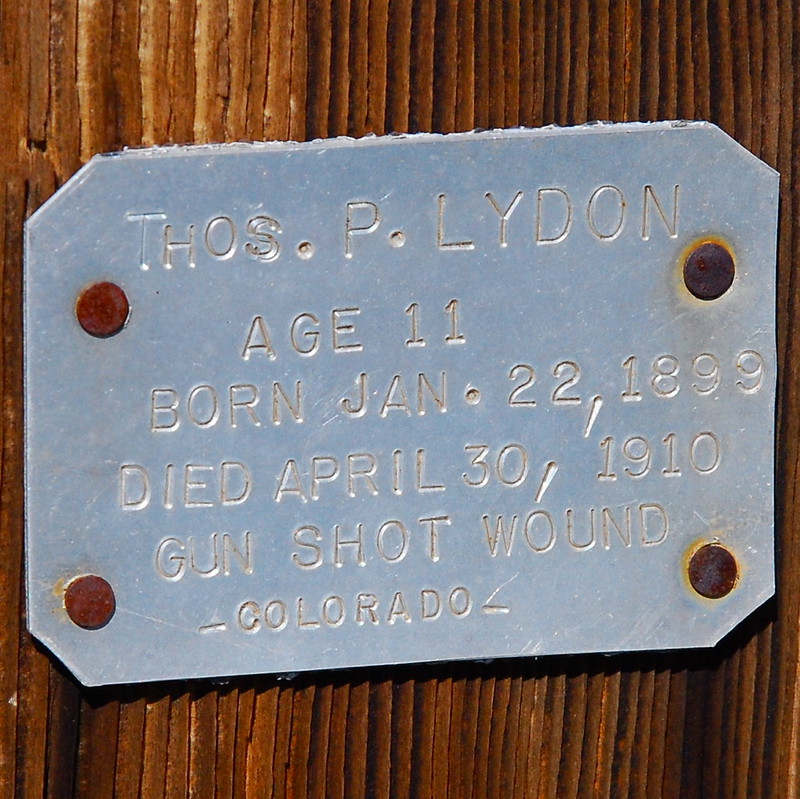 It was hard here. Of course it was, but it takes the brutal specificity of these tombstones—three children clustered together, all with the same last name—to see it as it really was, as a set of jagged personal tragedies, rather than some summed, stylized account in the tourist brochure, wedged between advertisements for the haunted bar and horse-led tours of the hills. 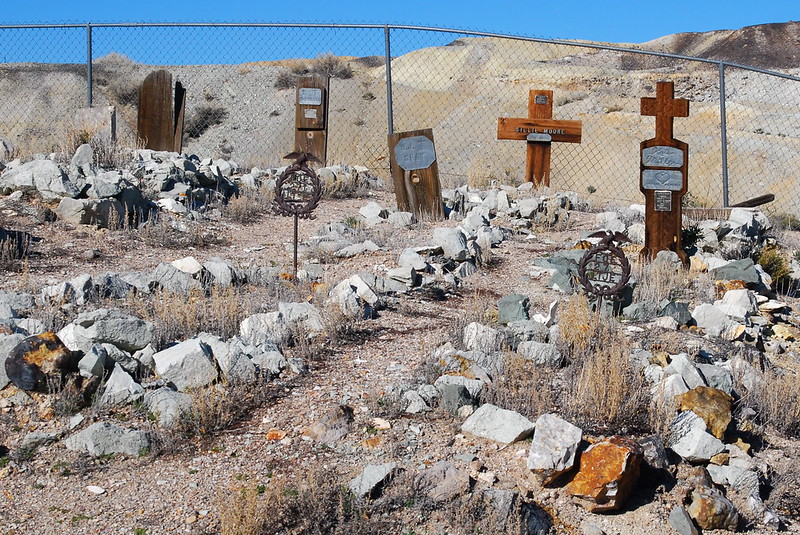 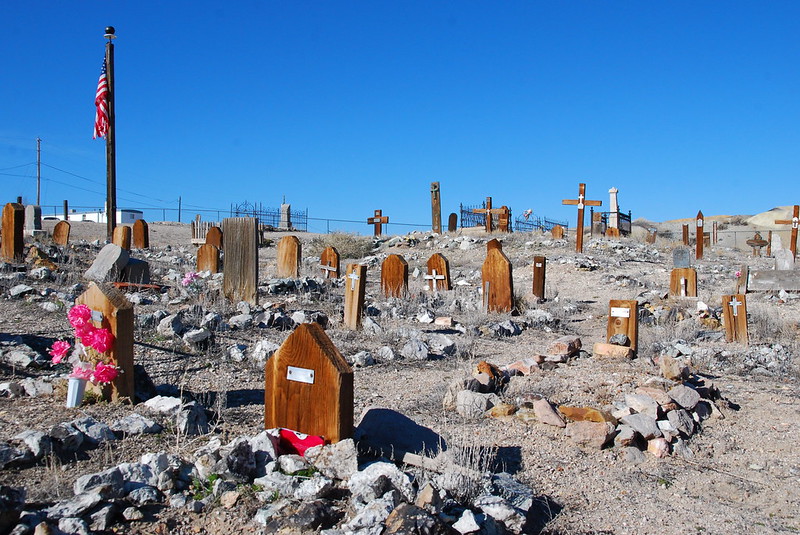 There are other Lydons too. Hannah, born in 1867 and died in 1910, just a few months before Thomas, was his mother. And there are still Lydon’s here. Catherine Banovich-Lydon was interviewed for the town oral history project in 1987. Thomas was her husband’s younger brother.

Later I find her interview, and read the whole thing, looking for clues of Thomas. There’s nothing much—his father had six children, and struggled to get them through school, especially after his wife died.

There’s nothing of Thomas. But there’s a lot about the others here, the miners:

Catherine: When I was young and worked in the restaurants I’d see those men I’d known my whole life just literally die before my eyes from the miner’s consumption.

Interviewer: Is that right—from the dust?

Catherine: Yes, from the dust. It was terrible—young men. They would work so hard, and get nothing. They always had, in the back of their minds, that they were going back home with money, and all this. And of course they didn’t; they all died from miner’s consumption. Really, it was sad.

Interviewer: Was it a fast death?

Catherine: Yes, a very, very painful death. They’d just literally cough their lungs out. There was the old mines hospital right down the street here, and they had a big screened porch where all those poor men with silicosis would sit so they could breathe same air. That’s the kind of thing that hurt me that I think about. And then at the old county hospital they had a house, separate from the hospital, where the men with miner’s cough were. I’d go over there and visit some of those guys, and oh! some of those old men… not old men; they were young men, but they were old physically. I was too young to really realize what was going on, but here they were. They just came over here and just died for nothing, really.

I wonder about the ethics of being here. At what point do graves shift from monuments to private loss to markers of public history? Is a century enough? Catherine died in 1993, but there are other Lydons still here, and in Reno. Are we trespassing on someone else’s still stirring story?

South of town, they’re rebuilding the road. Someone told us that it washes out almost every year, the soil unready for the once-a-season rains.

The scenery plays a trick on us. We’re in the middle of a vast, empty empire of dunes and broken rock, then, the next instant, we’re at the end of a mile-long queue of cars, idling into the hazy heat. Big SUVs and minivans with coolers strapped on back. Dads with their elbows halfway out the window, toothpicks in their teeth. We sit like this for half an hour as another mile of minivans piles up behind us, then lurch forward, unsteady and slow, through a tangle of machinery: cement trucks and cranes, a snowplow they’re using to level the asphalt.

But then another trick: we pass the last of the trucks, and suddenly we’re alone again, a small dot in the middle of nothing. The Tonopah Test Range is just over the last hill on our horizon. I think I see a small stream of something over there—powerlines, or an airstrip—but it could as well just be the heat.

We arrive in Rhyolite, a real ghost town, a little after noon. The place was built in 1905, with the Bullfrog strike nearby. By 1907, the population was at least 5000. There were electric lights and water mains, telephones and newspapers, a hospital and a school and a train station. An opera house. But soon the mines dried up, and so did the town. It was empty by 1920. 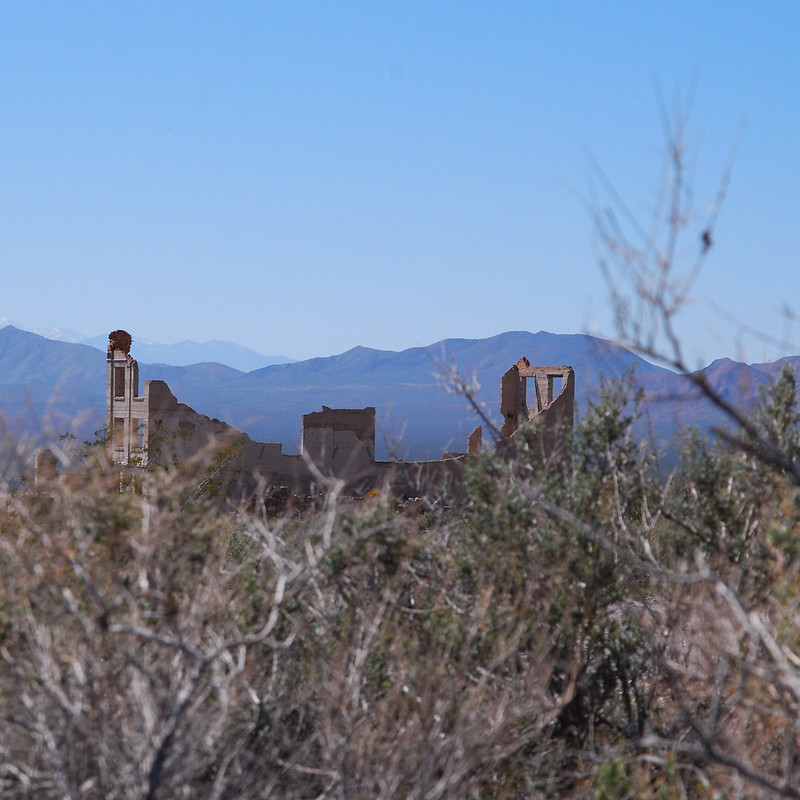 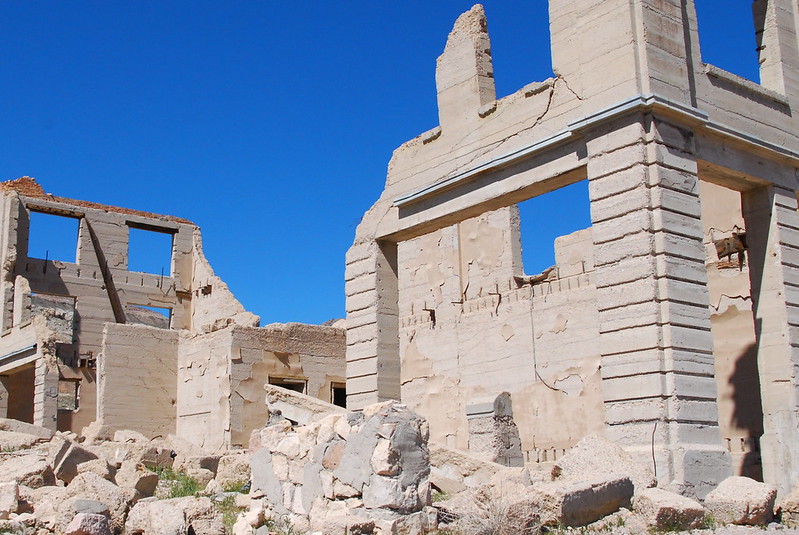 Most of the buildings were torn apart for raw materials: wood and stone, and sometimes whole structures, were taken to Beatty, four miles south, which grew more slowly, and more steadily, as a transportation and tourist hub. What remains here are the sun-bleached bones of buildings, crumbling into post-mortem purity.

The place is crawling with people: picnics and coolers; those dads and their Dorito-doused kids. Why do we all find this so fascinating?

I think it has something to do with time. This is our acropolis, the litter of the living undone into a uniform, ghostly white ground, almost holy and untouchably ancient. But it also feels faintly like the future. The place speaks of impermanence. In the grand sweep of history, everything goes. To walk among ruins not a century old, in a town that flourished and fell in a fraction of a human life, is to feel the fundamental fact of time: that everything flows and everything fades.

Here, the whole process is laid bare. In Portland, where we live, the town’s been tearing itself down for a decade to make room for the future. But the destruction is always hidden, because at its moment of completion, it begins to be replaced by something new. The empty lots only stay bare for a day. Even the ghosts are buried. But here they walk in the open, down what remains of the old main street, in the center of town, now barely a trail.

Death Valley is full of different ghosts: the ghosts of a whole world that’s now gone. Half a billion years ago, throughout the Paleozoic, it was all warm shallow sea. The hills hadn’t been made yet, no basin or range. Just low tides, teeming with life.

As the crust lifted, the sea retreated, and the place became a mountain range, risen by the same forces that lifted the Sierra. Then the forces reversed, and pulled the mountains apart into ridges and valleys, high mountains and baking flats. At first the flats were filled with a massive system of lakes—really an inland sea—but as the last ice age left, the lakes vanished into desert.

We crest the Funeral Mountains and pass Hell’s Gate, then suddenly we’re speeding down into the desert. Only… it’s not desert now. There’s dust and dunes in the distance, sun-bleached rock and parched soil. But the same once-a-year rains that ravaged the road also left a carpet of wildflowers, climbing up the dunes and coloring the hills, swaying slowly in the warm wind.

We pull over and walk through fields of red and green, purple and yellow. For all of the foreboding names and brutal history, somehow this is always here—these colors, this blooming confusion of new life—waiting for its short chance at a future. 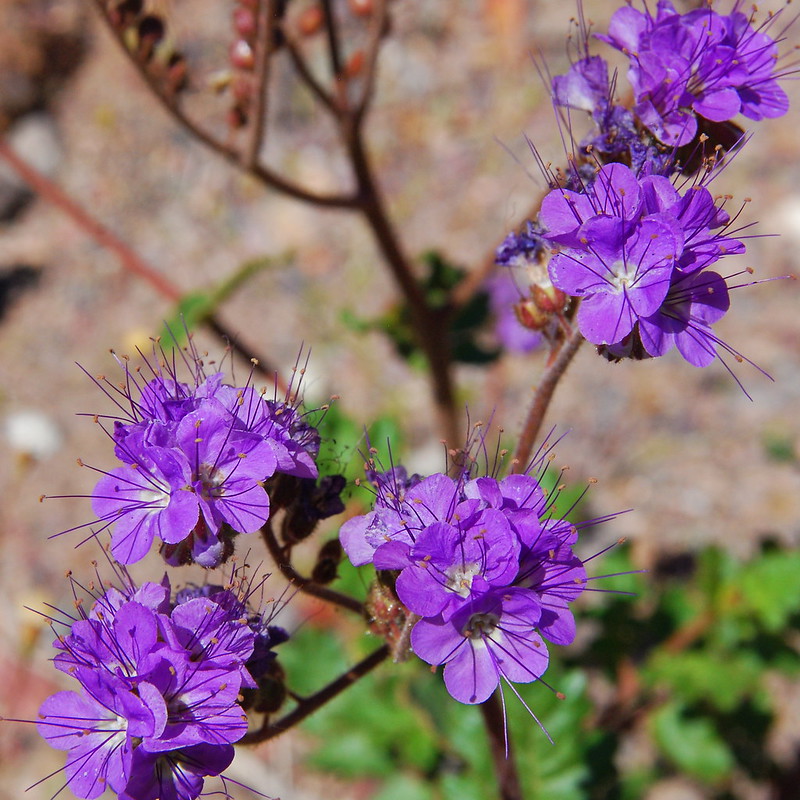 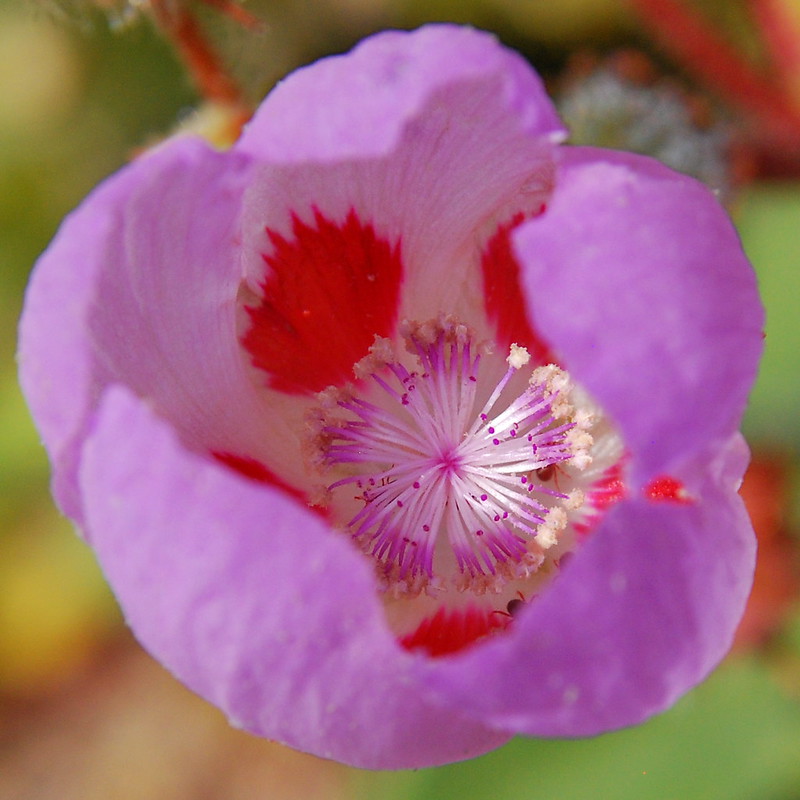 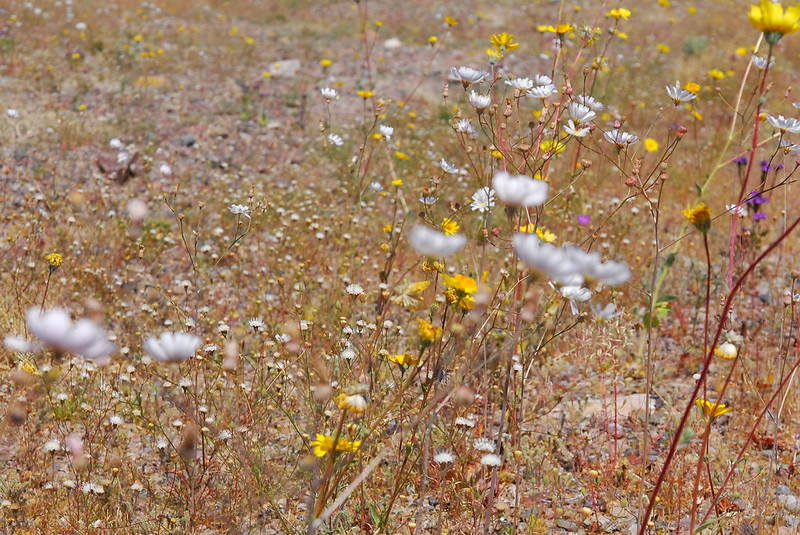