We wake up later than usual, after the day trip crowds have gone, and shower in the campground’s surreal bathrooms—fully furnished, like some suburban subdivision, but utterly out of place, in the middle of an otherwise empty lot, windswept and sun-bleached.

Then we ramble west, over broken rock ridges six thousand feet tall, hills that would be mountains back home. Like the bathroom, the colors here seem out of place: beige and light pink, utterly domestic, shades from a Sears catalog the year I was born. But instead of upholstered easy chairs, the colors cover jagged crests and shattered stream beds, all tumbling down toward the gleaming white remains of ancient oceans. 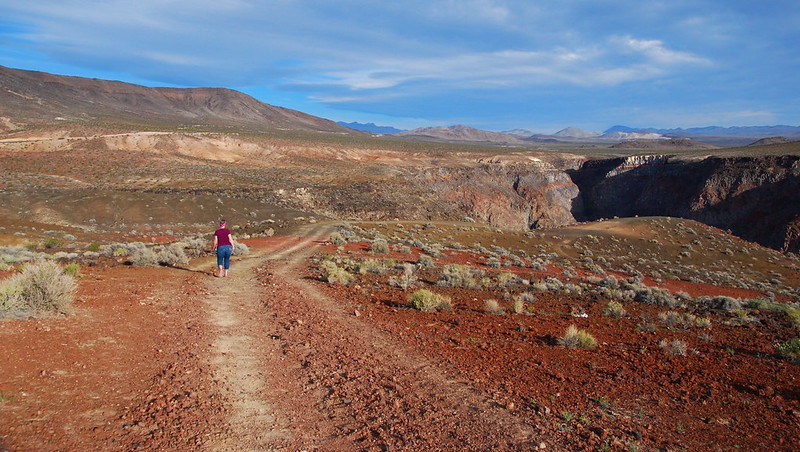 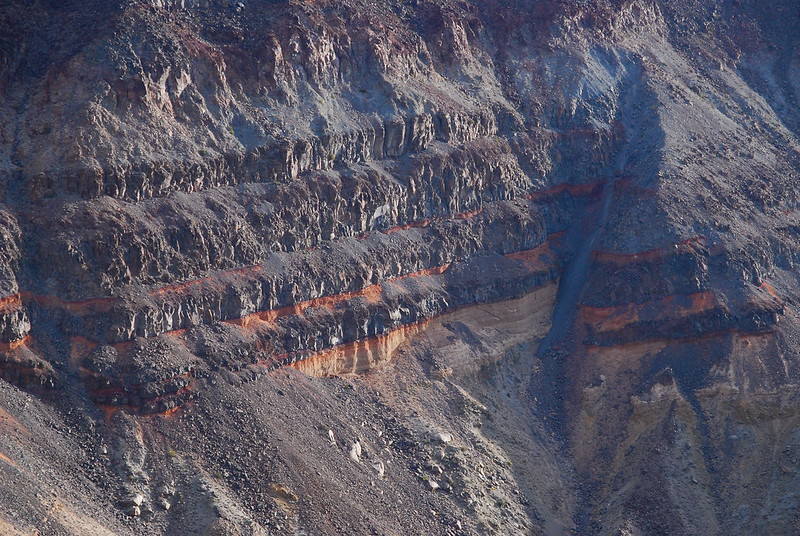 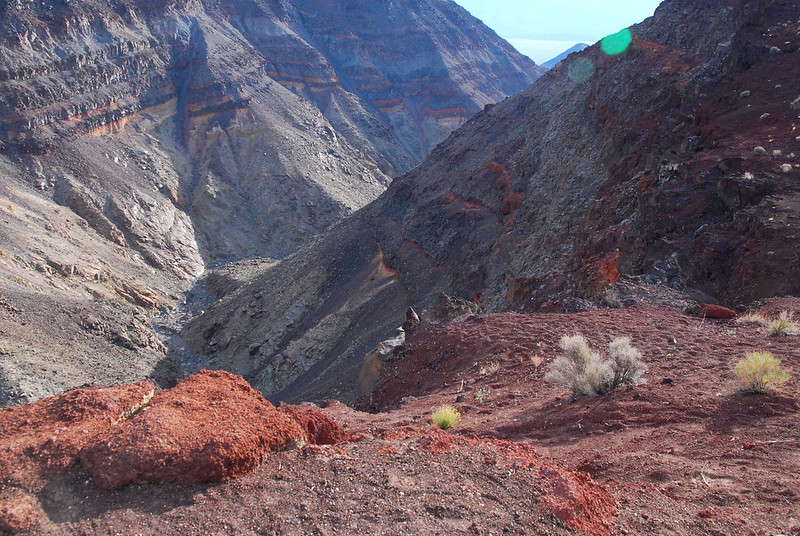 We drive into Lone Pine around breakfast time, and stop first at the beautiful Ranger Station just south of town, where I got our JMT permits last year while Krista waited in the McDonald’s, pacing out a small purchase every 30 minutes until I returned. I show Krista the benches outside and the Coke machine with the sort of reverence typically reserved for childhood homes. “This is where I sat to call you, to say to each other that it was really happening.”

Inside, it’s cool against the already warm spring sun. We read the titles of all the books on the shelves: histories of the Sierra, hiking guides, botany, birds, a young adult mystery novel about kidnapping and the 10 Essentials.

There’s a 3D scale map, the size and shape of a large dinner table, and we circle around it, running our fingers up the rivers, over glacier-polished peaks and passes. Krista’s seem to go hang gliding for a moment, then land just north of the Black Divide. “We should go here some day.”

Lone Pine’s mostly just a narrow strip, north-south along 395. West of town, things end abruptly in the Alabama Hills: a jumble of smooth red rock, as old as the Sierra.

We park at a pull-out surrounded by boulders, and scramble separate ways: Krista to a clearing full of flowers, and me to the top of a small promontory, from which I stare west at the crest, tracing the mountains, the real mountains this time, slowly with my fingers. It feels holy to be here, to be staring up there. 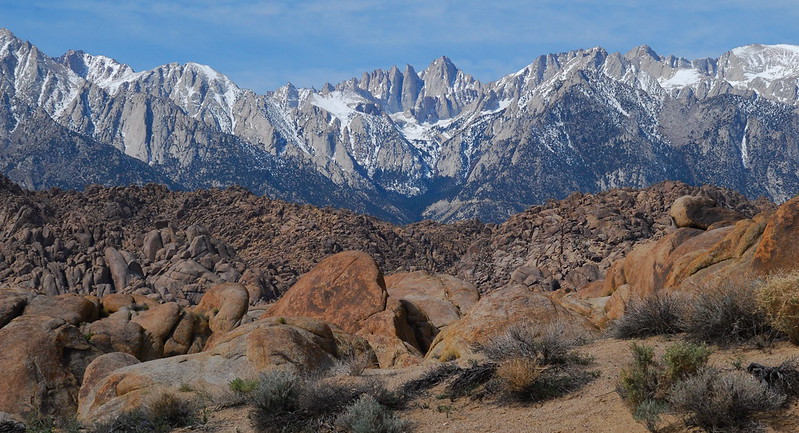 How did this all start to mean so much to me? How did this place, thousands of miles from home, imprint so permanently?

I’m an atheist—not militant, but immovable—and I’m not used to feeling this way, so full of something I can’t explain. How does it happen? How does the world begin to feel so wonderful? So full of… everything?

I used to tell people that I’m not religious in the same way that I’m not a bat: it’s a form of life so far from my own that I cannot even begin to imagine it. But here, staring at the still snowy peaks and their short shadows in the late morning light, I maybe understand. I think of something from Bede Griffiths:

One day during my last term at school I walked out alone in the evening and heard the birds singing in that full chorus of song… I remember now the shock of surprise with which the sound broke my ears. It seemed to me that I had never heard the birds singing before… As I walked I came upon some hawthorn trees in full bloom and again I thought that I had never seen such a sight or experienced such sweetness before… I came then to where the sun was setting over the playing fields. A lark rose suddenly from the ground beside the tree where I was standing and poured out its song above my head, and then sank still singing to rest… I remember now the feeling of awe which came over me. I felt inclined to kneel on the ground, as though I had been standing in the presence of an angel; and I hardly dared to look on the face of the sky, because it seemed as though it was but a veil before the face of God.

In college, I played hard at disaffection. I listened to heavy white noise and drank way too much, went on long walks along the train tracks in the old industrial part of town.

It was mostly an act, of course, but there was also a glimmer of something real there: I didn’t understand—I couldn’t understand—what there was to value in the world. It seemed mysterious to me. I took philosophy classes and I couldn’t understand what people meant when they talked about values, when they talked about things mattering. Where do values come from? You can’t look at the world and see value in the same way you can see, say, color. And you can’t see things mattering in the same way that you can see, say, a river flowing.

I worried that, but it was a worry. It was something I didn’t want to be true.

My last year in college, someone gave me an ancient photo copy of an essay by the British philosopher R.M. Hare, who tells a beautiful story about a friend who, like me—the analogy was obvious from a red “YOU!” written in the margin—could not escape the feeling that nothing really mattered, that the universe was ultimately a meaningless confusion of scraps, adding up to nothing more than the self-evident fact of its own existence.

Hare’s answer is so perfect that I need to quote it at length:

[W]hen we say something matters or is important, what we are doing in saying this, is to express our concern about that something… [W]hen somebody says that something matters or does not matter, we want to know whose concern is being expressed or otherwise referred to… My friend… had thought mattering was something (some activity or process) that things did… If one thinks that, one may begin to wonder what this activity is, called mattering, and how one may begin to observe the world so closely… to see if one can catch anything doing something that could be called ‘mattering’; and when we can observe nothing going on which seems to correspond to this name, it is easy for the novelist to persuade us that after all nothing matters. To which the answer is: ‘Matters’ isn’t that sort of word.

There’s something possibly deflationary about this explanation. We’re used to talking about value as a sort of magic that’s somehow actually in the world—as a primary quality that some things just have. But if Hare’s right, then value’s just not like that. It’s always tethered to creatures for whom things can be valuable. We make it.

But, to me, the explanation just pushes the magic back a step: value isn’t terribly mystical; but, to me, valuing still is. What’s magic is that there are creatures like us in the first place, creatures who can love the world, who can become attached to it in various ways and in so doing enchant it with an almost unspeakable significance. The world is magic because we make it magic.

So I’m sitting here staring at the mountains that have magically become my mountains, our mountains, that have magically made their way into our lives, and become part of what makes us at home in the world. I trace the peaks with my fingers: the ebb and flow of rounded ridges, the stark sharp peaks around Whitney, the needles to the north… I trace the peaks, and imagine the trails on the other side, traversing just west of the divide, meandering down to groves of snow-buried Sequoias older than the roads and towns that now surround them. 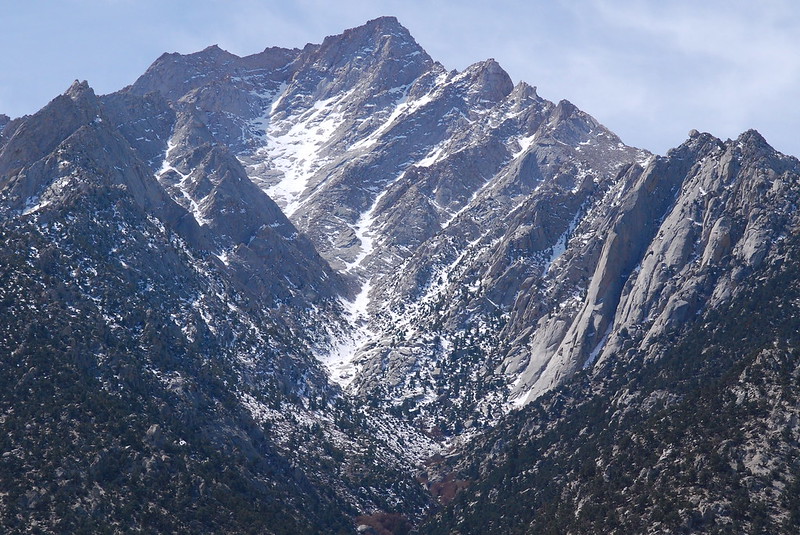 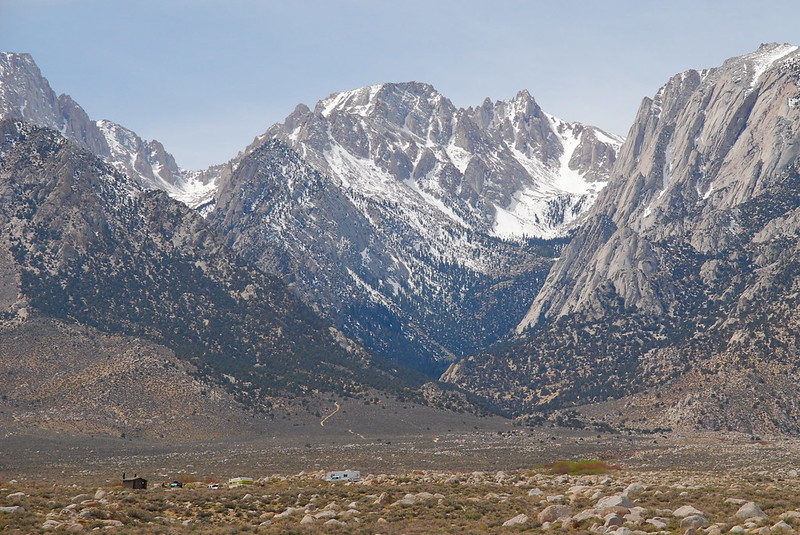 I look back and Krista’s hidden among the low hills, taking photos of the new flowers, just pushing their way through the dark gray granite dust. She’s on one knee, bent down, taking a closeup of a friendly yellow flower. Then she sees me, and waves, and takes a picture.

I stare for a long time, watching her methodically greet all the new growth. And I think about the two of us in college, me spouting some trendy existential bullshit, and her just smiling, in her white frilly dress, looking out at the flowering trees, laughing at the pigeons’ bizarre attempts at romance. 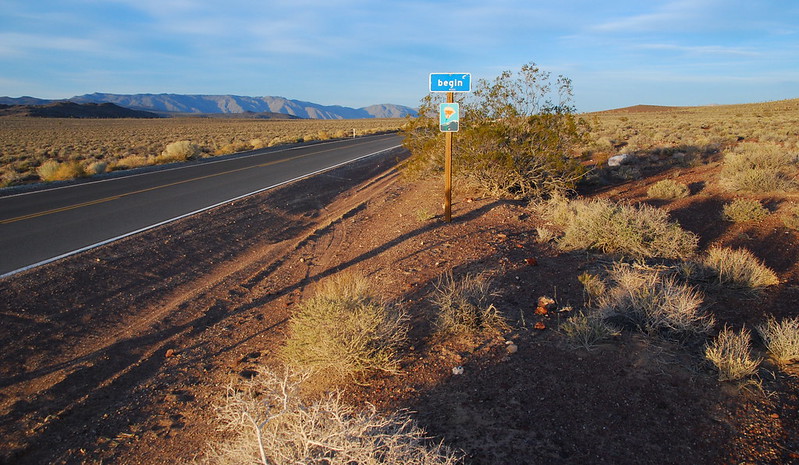 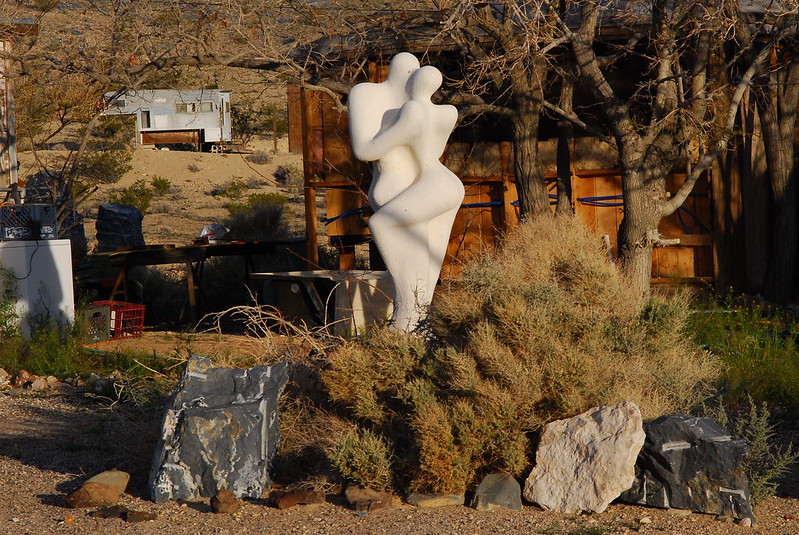