So we’ve gotten sort of out of order. This post, and the next several, will be about hiking at the end of last summer, in the few weeks between me getting home from the PCT and the onslaught of winter. This one’s about the first trip we took after I got back: a short off trail thing on the east side of Broken Top, from Three Creek Lake across the headwaters of Tumalo Creek to the base of the Crook Glacier. It was just a one night thing, but it meant a lot, being home…

We leave Portland early, and drive bleary-eyed through familiar hills to Sisters. Krista sleeps, and I just keep looking over at her. I know I was just gone for a month, but it feels like I’ve been gone forever. I just keep wanting to grab everything and hold onto it.

So we drive into Sisters around nine, then meander up Elm, as it slowly shifts from residential to wild. The parking lot at Three Creek Lake is already overflowing with Suburas, and we scurry up Tam McAthur as it too shifts from a pedestrian highway filled with neon runners and khaki hikers to an empty, windswept expanse in the shadow of Broken Hand.

We leave the trail as soon as it leaves the trees, and zigzag southwest, through minor gullies and bits of snow, past a family of deer and the North Fork Tumalo, where it springs, fully formed, from an otherwise dry, dusty hillside. Then over familiar fields of snow and a dozen small strands of Crater Creek, flowing fast through the valleys just west of Ball Butte. 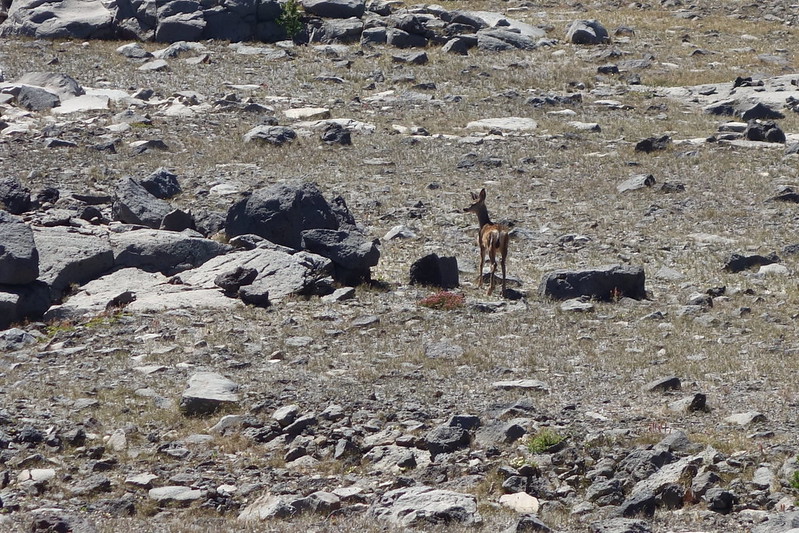 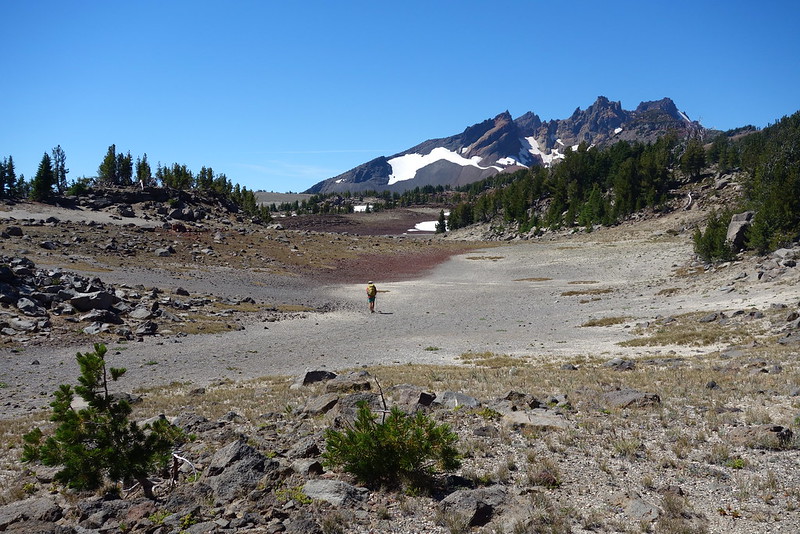 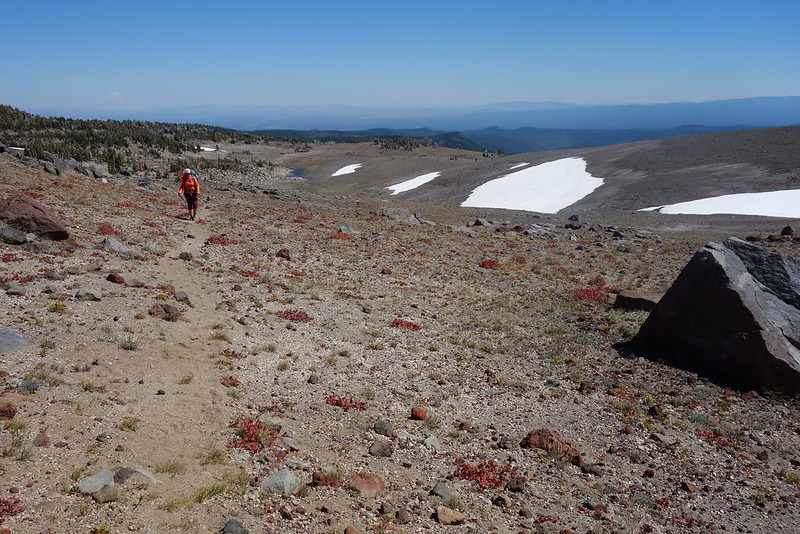 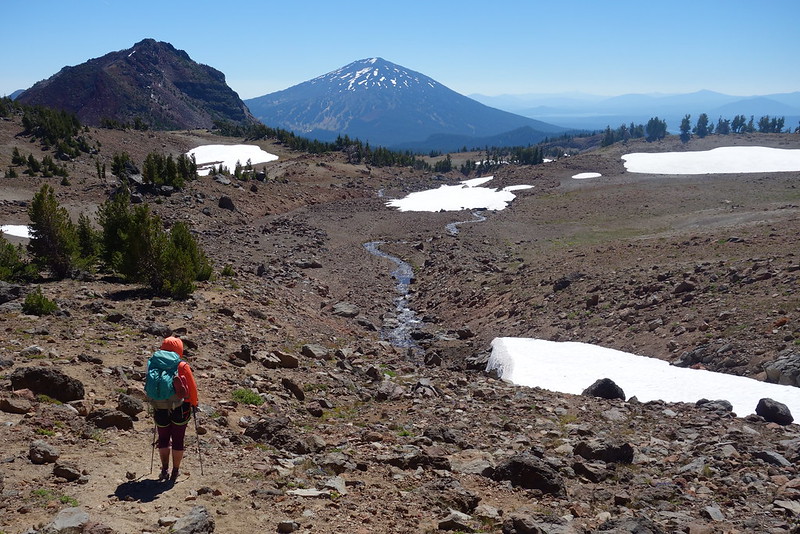 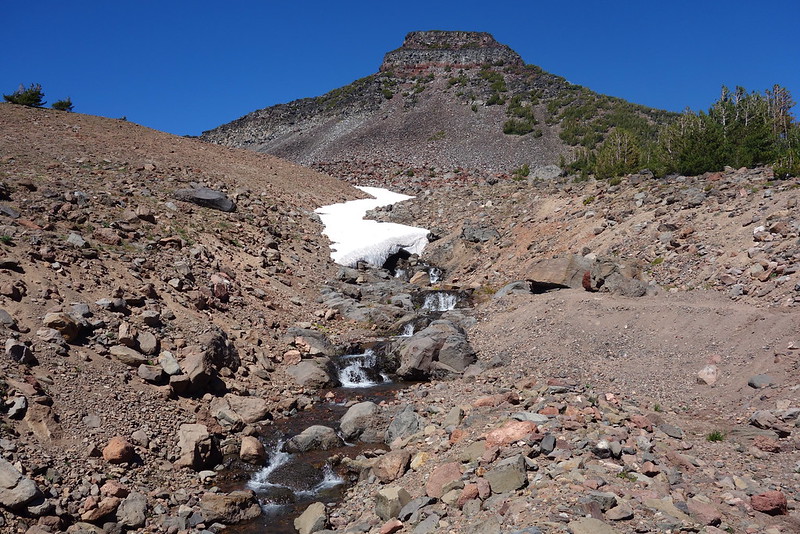 We cut west at a shallow pass in Broken Top’s southern shoulder, and meander through the endless rolling meadows below Broken Top’s southern crater. We set up camp in the trees, on top of a small hummock, overlooking fields of tiny streams, springing from, and cutting clean channels through, the loose, sandy pumice—meltwater from the creaking Crook Glacier, a few hundred feet above. 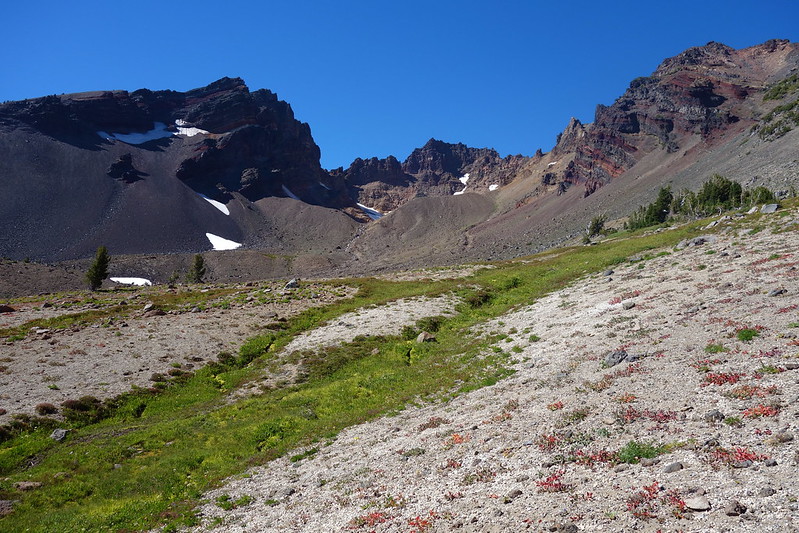 Around the streams grow dark green bands of tangled grass, knee high, studded with bright red and white and blue and pink and purple—the last of the summer’s flowers, still holding on despite the coming autumn chill. 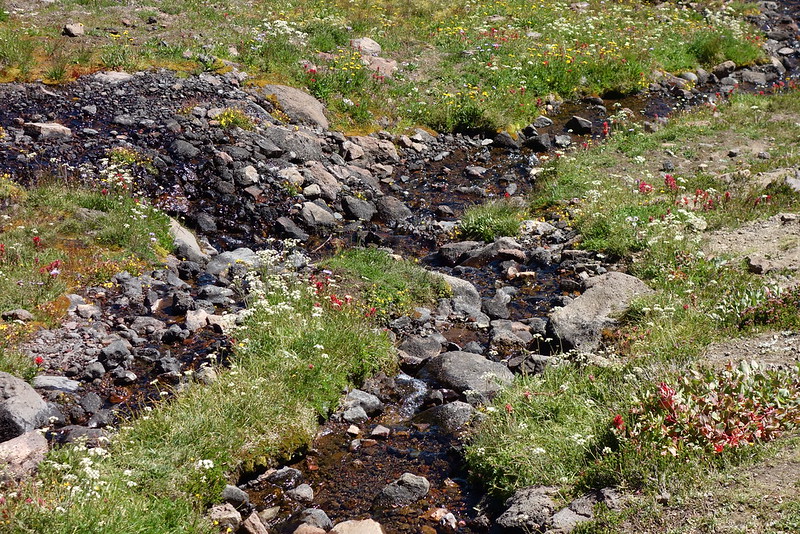 We get in with a few hours to spare before dark, so I scramble further up into the crater, rock-hopping from side to side of a steep, silty stream, to the base of what’s left of the Crook Glacier. The whole place is littered with large rocks, and I can hear more, unseen, crashing down like distant thunder echoing through the ice. And there are flowers, bright yellow, blooming in the marshy basins left by receding snow. 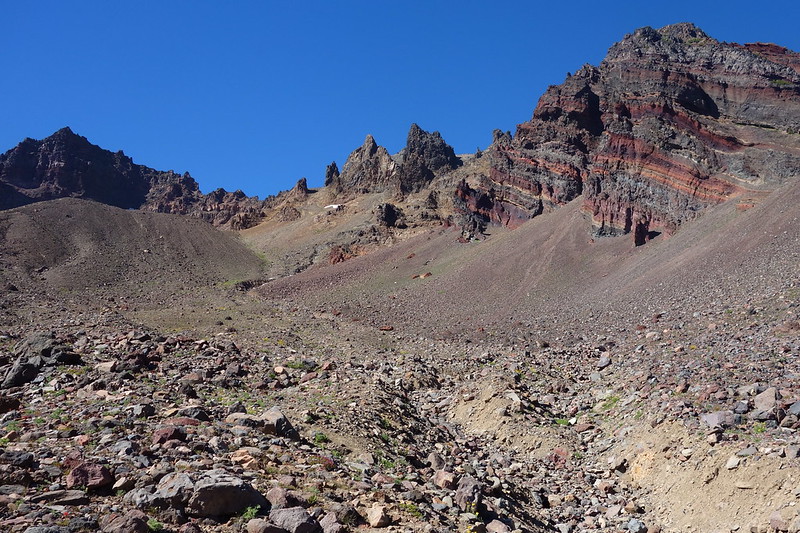 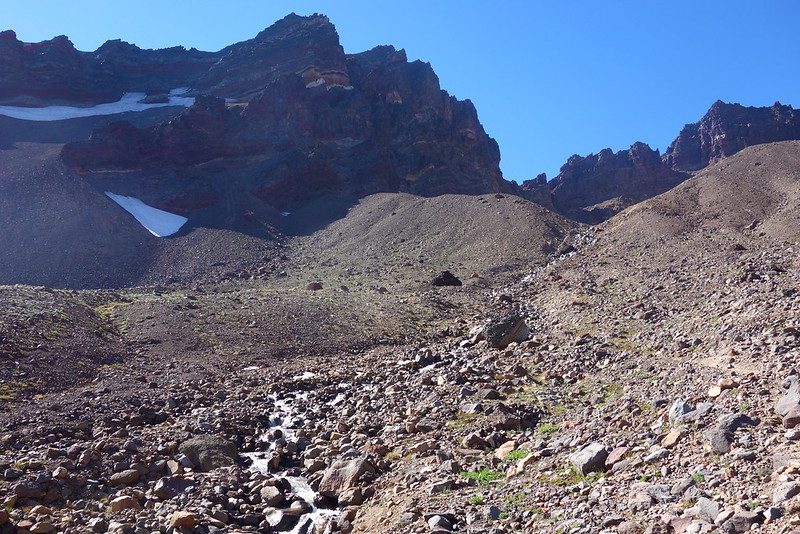 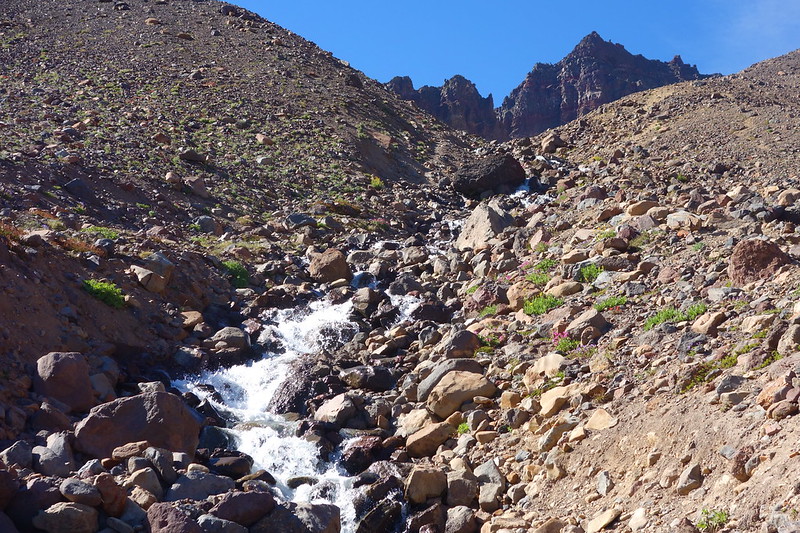 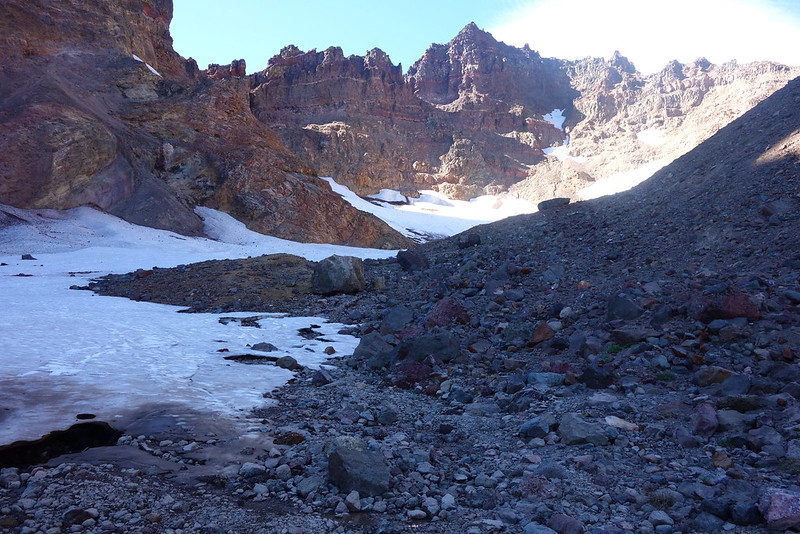 I sit for a while and listen, stare up at the red rock turrets slowly crumbling into nothing, and think about geological time: when the Appalachians were as tall as the Himalayas, when this will just be a foothill in the shadow of some new range, when this was the ocean… 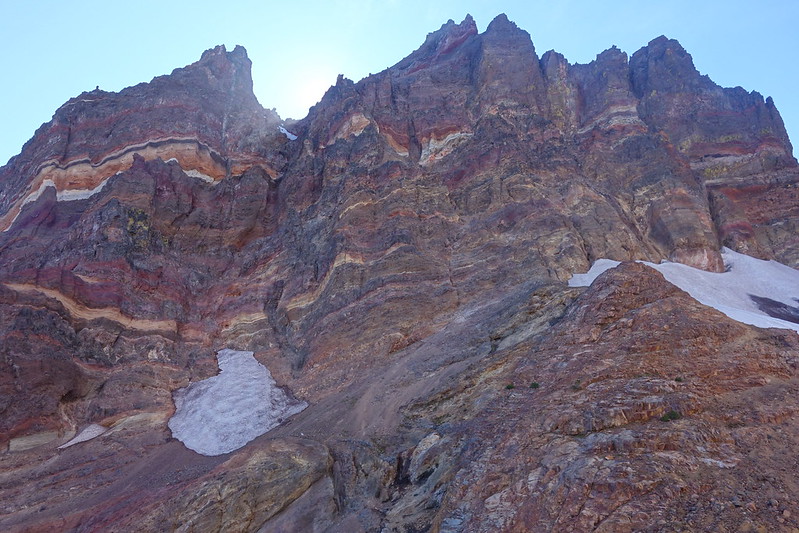 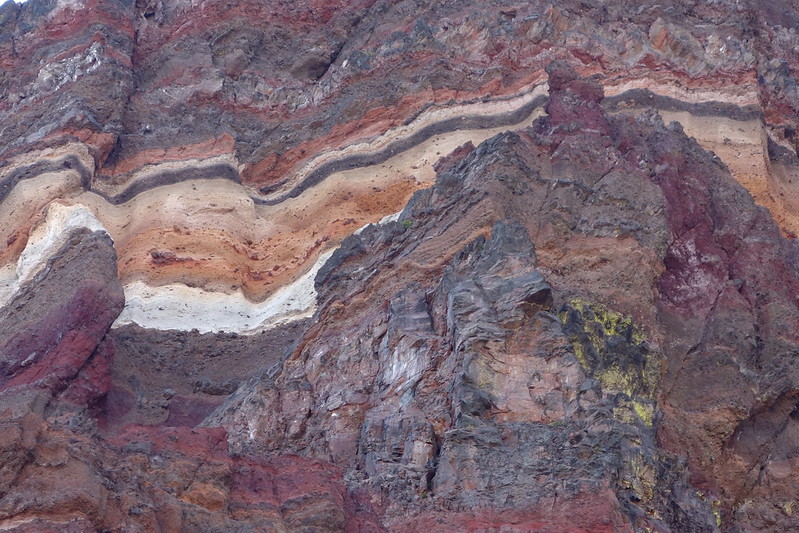 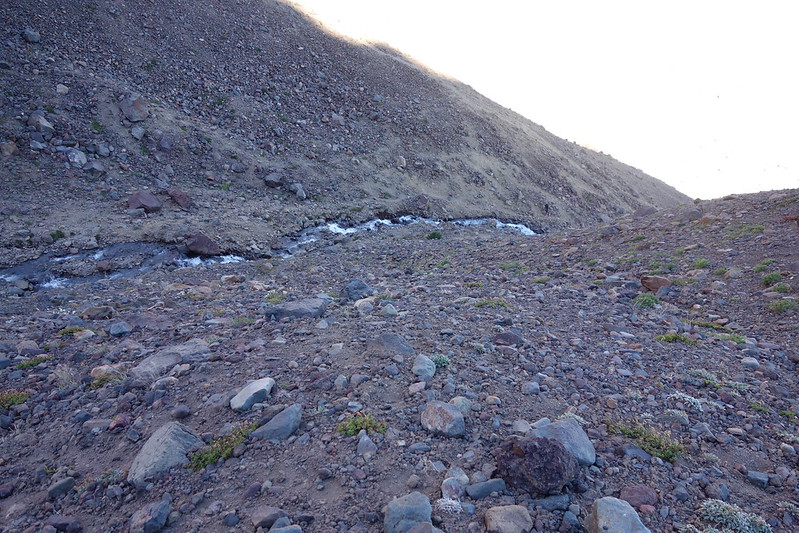 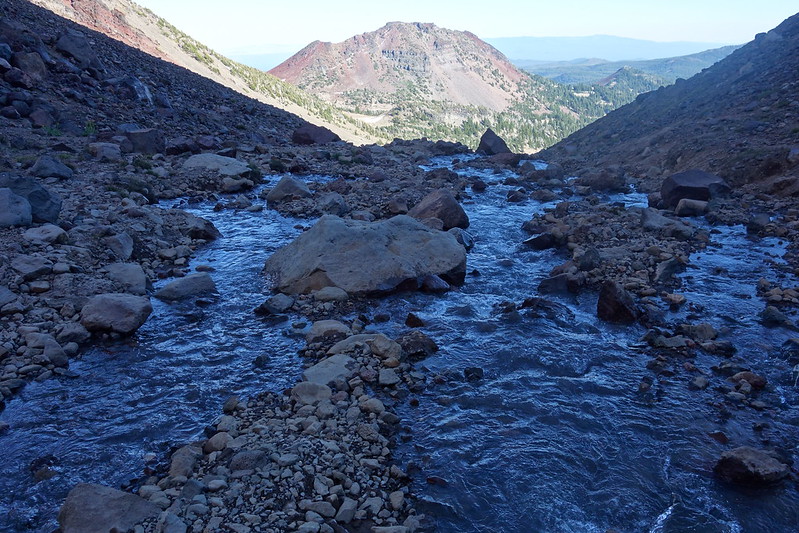 But then, inexorably, I think about dinner, and decide it’s time to head back. 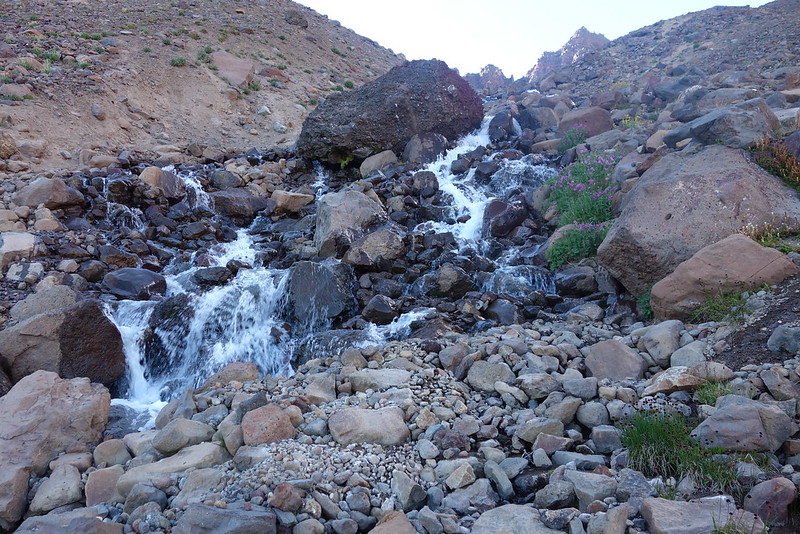 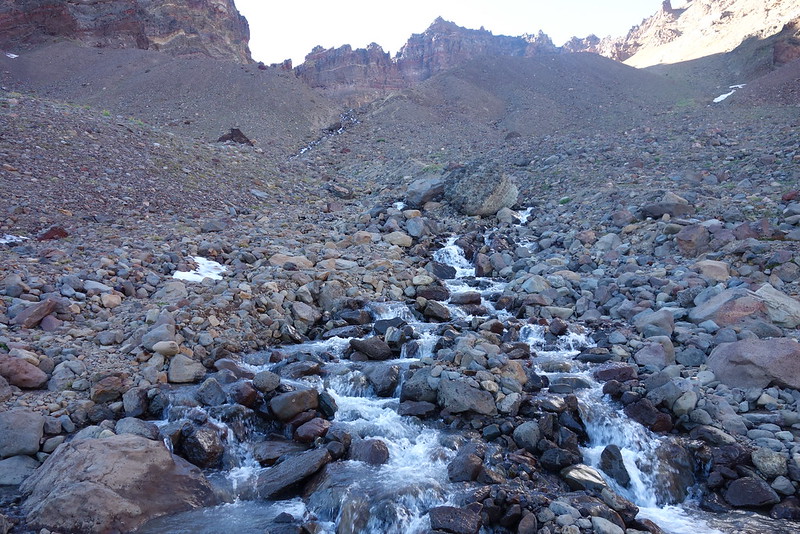 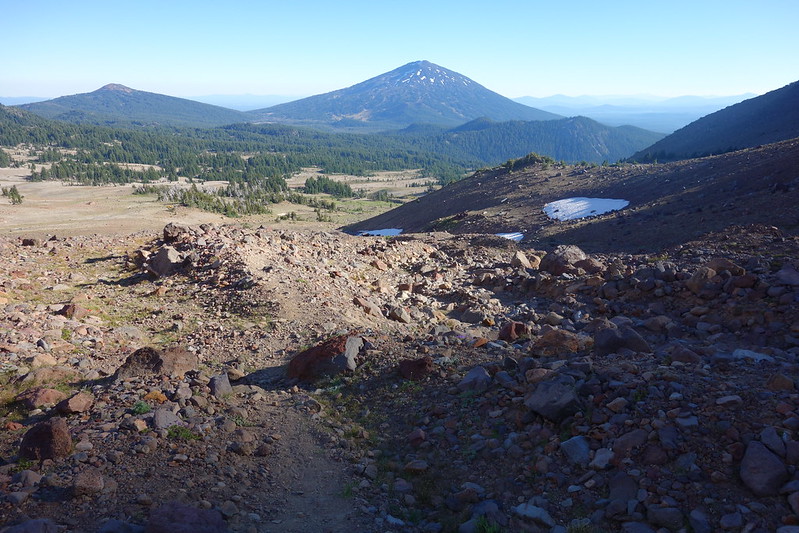 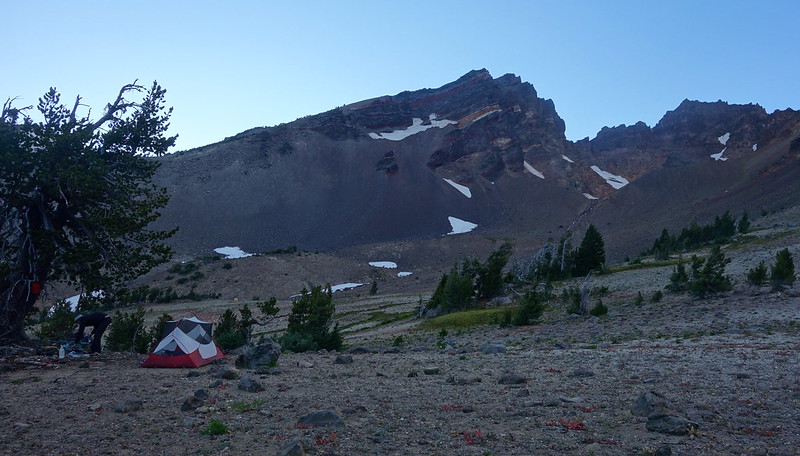 We eat gumbo, gloriously, and talk about the first time we had it, on the JMT. It was a hot, smoky day. We’d just resupplied at Muir Trail Ranch, which is possibly the least hiker friendly place ever, and were both feeling just sort of shitty. But we found some freeze dried gumbo in the hiker boxes, and ate it that night, on the far shore of the Sally Keyes Lakes, watching night fall on Mt. Senger. It was the best thing we’d had in weeks, and suddenly the day didn’t seem too bad.

Then we talk about the last time I had it, in the Goat Rocks on the PCT just below Elk Pass, the night it snowed. I was scared and alone, not yet used to the trail, or camping by myself. But the gumbo brought me back to that night with Krista, and suddenly it wasn’t so scary. 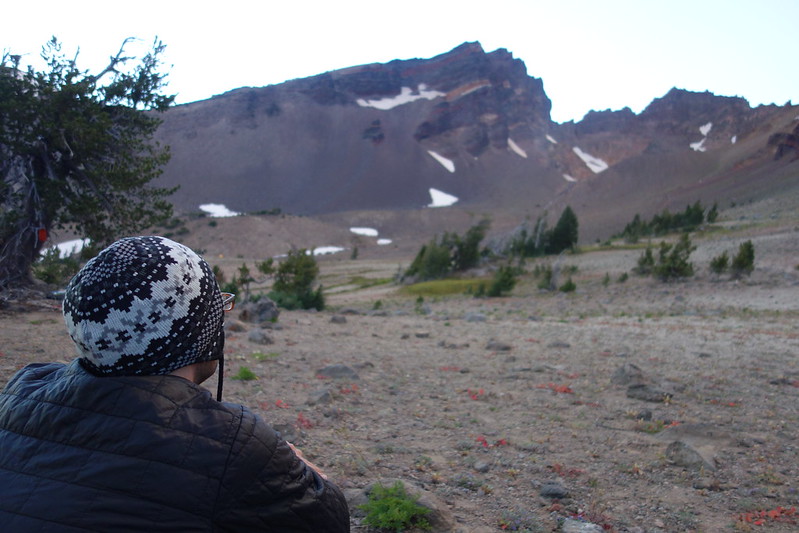 I’ve been thinking a lot lately about why we hike. Like, what exactly is the purpose of it? What are we looking for when we go out?

There’s an easy answer—that we’re out to see nature, get fresh air, to bask—but I don’t think that’s right. Or, at least, I don’t think it’s enough. It’s not enough because it can’t make sense of what it means to be out on a hard day, in the rain or snow or smoke, struggling through miles but still not regretting a thing. What are those trips for?

I’ve been thinking maybe that’s not actually the right question. Maybe it’s wrong to ask about one trip in isolation, and we instead need to think about why it is we keep going out, revisiting old friends, walking the same trails through sun and clouds and snow, climbing the same mountain from different sides.

Maybe this is all one thing, one long project we’ve been pursuing for years. Every day we’ve been out, every mile, every storm, every beautiful sunset or dreary morning mist. Maybe it’s all part of a single attempt to understand the world, to see it from all sides, to know what it’s really like, not just on the sunny days when half of town trundles up Eagle Creek, but also in the rain and fog and smoke, not just when we’re feeling full of everything good, but when we’re too tired to stand.

Seeing it all in every light also means that there are strange reflections that run through our lives: when it’s stormy in town, I think of Glacier Peak, making coffee out the front of my tent, hands soaked by blowing rain. When it’s sunny, I think of the two of us, cowboy camped on the top of Tanner Butte. In the early morning, I remember Lake Marjorie in the pre-dawn dark, packing up at the beginning of a long, beautiful day.

And when I smell gumbo, always—and I smell gumbo at least an order of magnitude more than you might think reasonable—I think of that night at the Sally Keyes Lakes, feet in the water, together.

We finish, and it’s time to hang the food bag. We shuffle over to the base of a gnarled old pine, and I explain to Krista about hanging my food on the PCT. I tell her I got good at it: tying a stone to my rope, throwing it over the highest limb I could reach, hoisting my bag. I did it every night… or, okay, almost every night… or, I mean, okay, yea, but, like, at least once or twice in the North Cascades.

So I explain to Krista about getting so good at this, the best rocks, the best knots. And I throw the perfect rock at the perfect limb and it soars gracefully, in a perfect arc, onto… well, onto nothing. I miss completely. Like, I’m not even within five feet of the branch. I shrug, trying to look nonchalant. “Oh, okay, well, sometimes it takes a couple throws to get the feel of it.” She stares at me with an indeterminate expression, somewhere between interest and deep delight. “Oh, I see.” And she smiles at me in that way she’s been smiling at me for years. I bluster on. “Oh, see, sometimes you’ve got to throw it underhanded.” She nods, seriously. “I see.”

I throw again, more carefully this time, and with greater ceremony. Greater pomp. And again… well, nothing. It’s actually several feet further away than the last one. “Ah, well, I think there’s a slight wind coming from the southwest.” Krista nods again, solemnly. “Indeed. The southwest.”

Krista nods again, with precisely the same sense of solemnity, utterly unsurprised. And she smiles at me. “I love you.”

The next morning, we wake up early, in time to see the sunrise, but loaf around camp until the late morning sun forces us up. 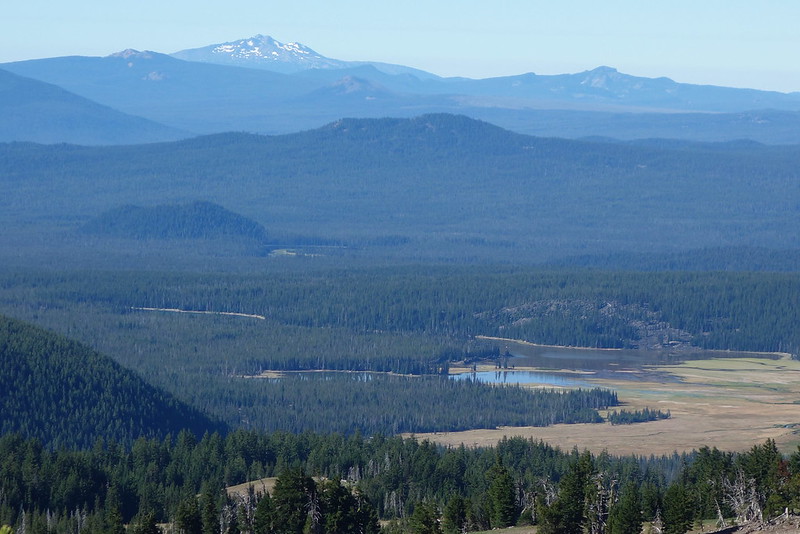 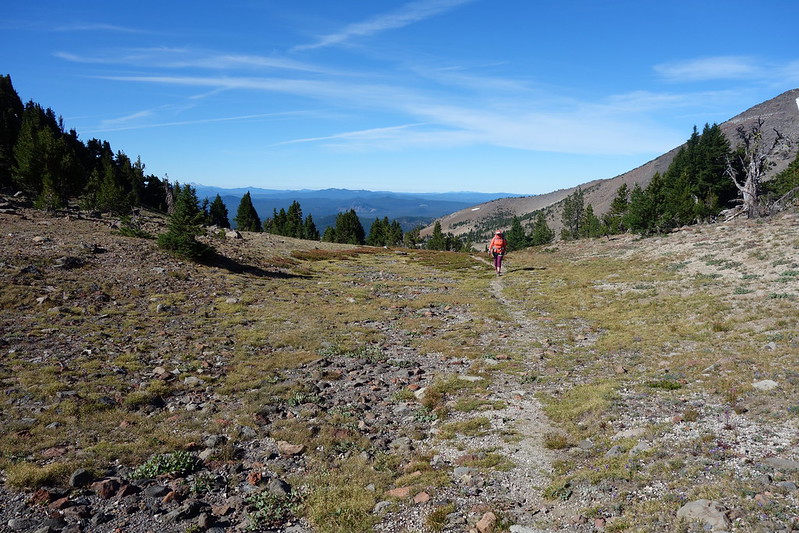 There are tons of dayhikers today, coming up from the south to see the unnamed lake below the Bend Glacier on Broken Top’s east side. The first time we saw it, years ago, there weren’t really any trails. It felt like a private revelation. But now it’s flooded with people, taking pictures with their cell phones, selfies.

We rush through the crowd, but I can’t help but run up to the lake myself. I think it’s my favorite lake Oregon. And despite all the people, it’s still relatively well-preserved—not too many social trails, no camps in sight. 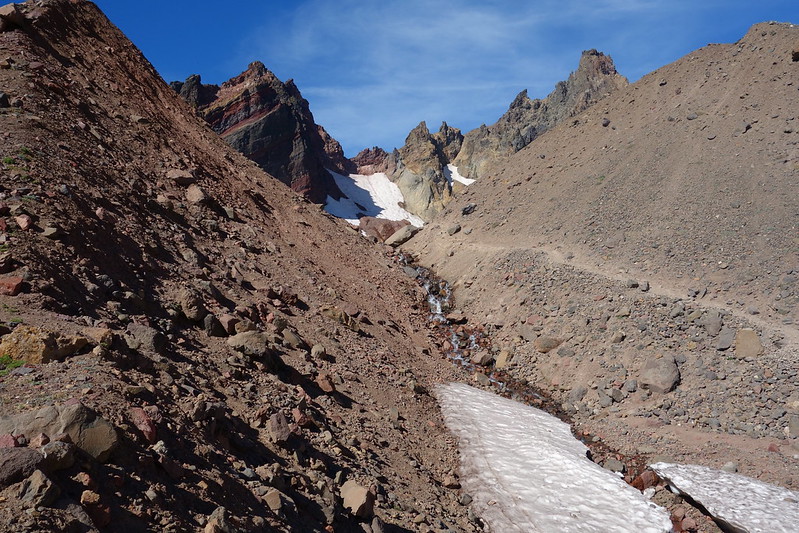 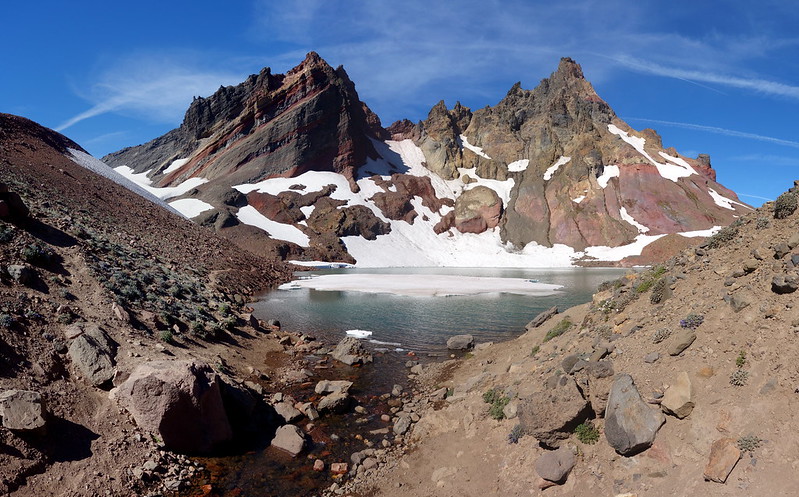 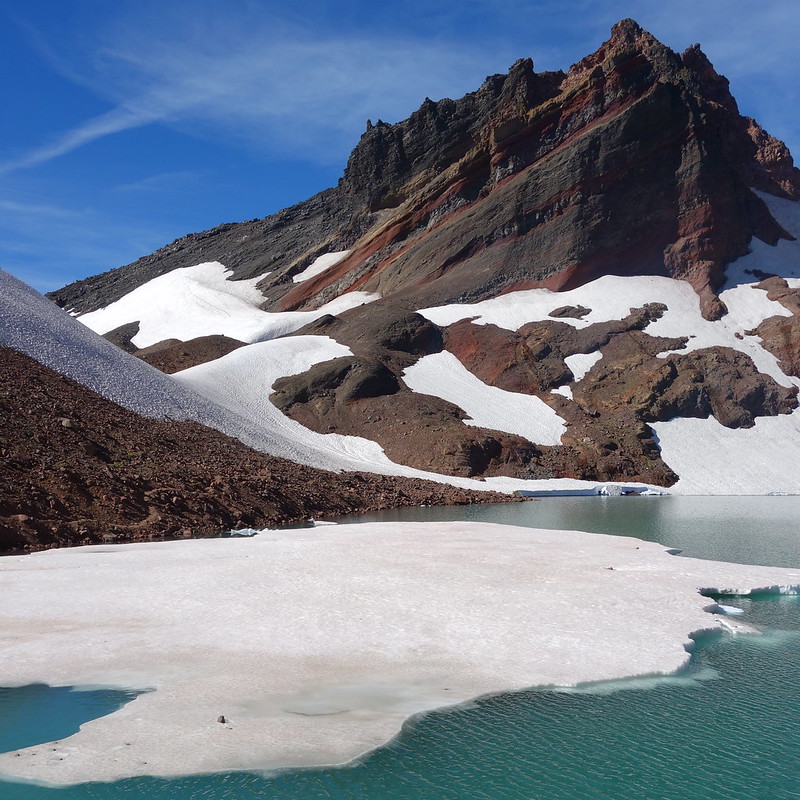 I climb up the ridge that runs from Broken Top to Broken Hand, and look down. The people are smaller, and the lake as beautiful as the first time we saw it, in bad shoes in the rain, all alone up here.

Eventually it’s time to ago. I find Krista on the side of a stream, taking pictures of the water as it emerges, rushing from a ten-foot snowbank, and we pick our way through the empty pumice plains, back to familiar trails. 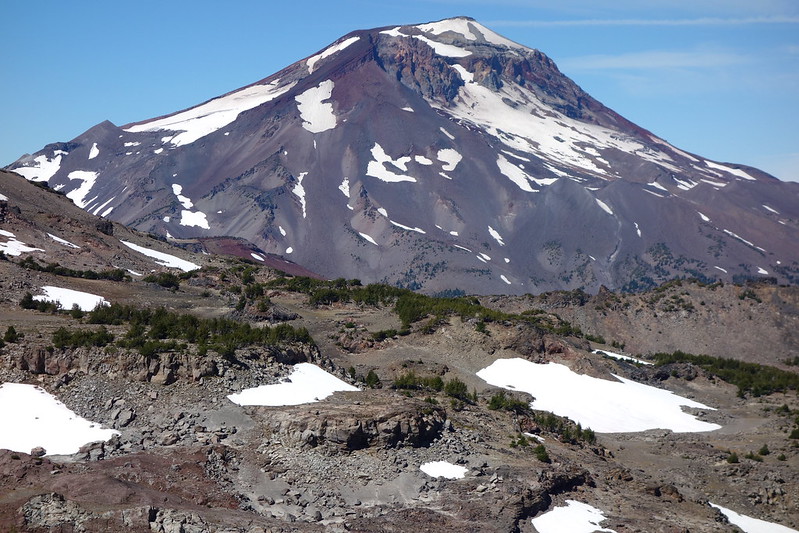 One thought on “Climbing the Same Mountain from Different Sides”