In the morning, everything is absolutely soaked with condensation. I guess this is the price one pays for sleeping in what is essentially a swamp. But no matter. Today will be short, just six miles downhill to the North Fork Quinault, then ten of roadwalking to Graves Creek. There should be more than enough time to yard sale and dry everything out.

I pack it all up wet, then ramble down the Three Lakes Trail, through thick old grown and overgrown brush. There’s blowdown and a few small washouts, but nothing compared to the Skyline, and the morning passes pleasantly: a few easy miles in sunrise light. 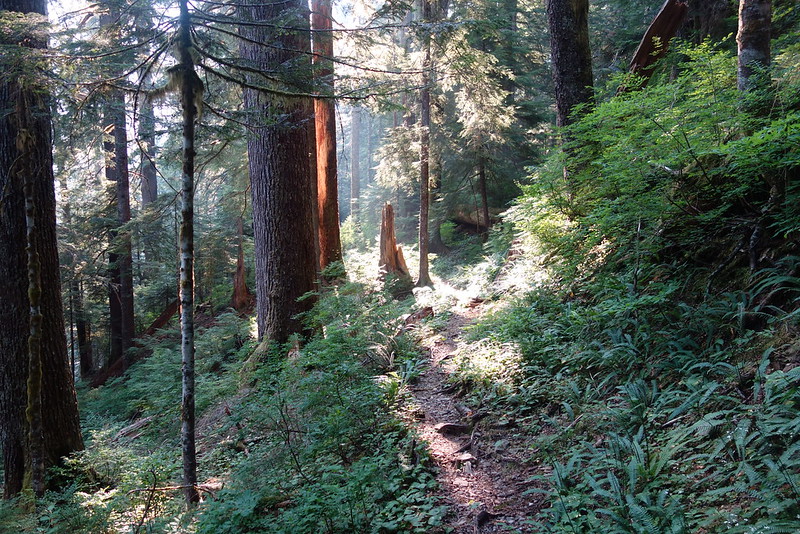 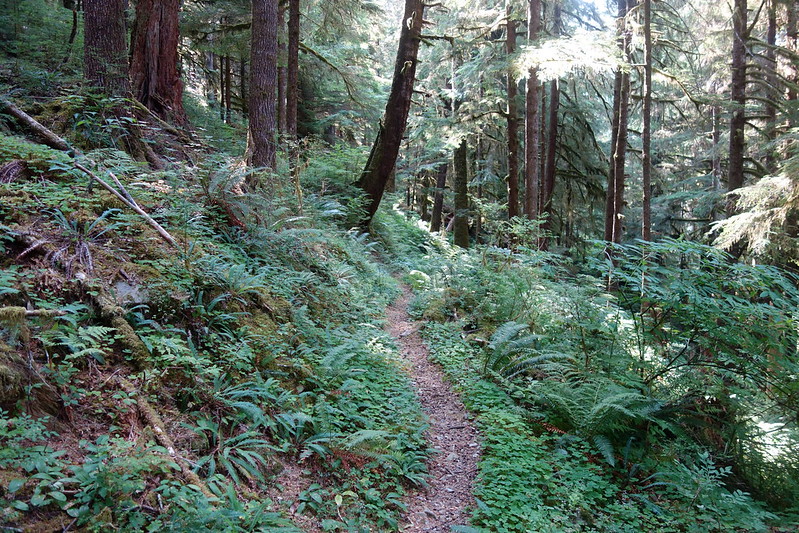 Nearing Big Creek, the trail disappears in a washed-out jumble of logs and river rocks. I shimmy down a smooth, stripped cedar to the creek, then stop for breakfast and a break. The water’s rushing here, through a steep, smooth canyon littered with trees of every age and in every position—the history of a whole forest shaken up and spilled out.

I think of writing a book, a history of the blowdown in a single stream, or maybe in a single basin. There’s a tale in every tree: a windy night, an avalanche, a strong spring rain, lightning. I think of the nature shows I watched when I was a kid, where biologists would always name the animals they studied. Maybe someone could name all the trees.

“Will died last night in the wind, but now he spans the canyon. This morning a squirrel ran across. Birds still nest in his boughs.”

From Big Creek, the trail traverses a minor ridge on its way to Irely Lake. The tread gets better and better until, in the distance, I see a bit of unnatural orange. A person! And their orange hat.

Turns out to be an old man, sitting on an old log, leaning heavily on his cane. He smiles widely, in a way that reminds me of every kindly old man I’ve ever met, and tells me good morning. “Oh, he…” My voice breaks in a cough. “Hello, sorry.” My voice sounds strange to me, and I realize it’s the first time I’ve spoken in days. “You’re,” my voice breaks again. “Sorry, you’re the first person I’ve seen in four days.” The man chuckles companionably and bows his head. “Good to see you! You’re, well,” he pauses to think, “the sixth person I’ve seen this morning.” I laugh, genuinely overjoyed just to be talking to another human. “Should be a bit more solitude up the way! Anyway, good to see you too. I was beginning to think that people had stopped existing.” The man laughs again. “No such luck. Yet.”

In the next few minutes, I see the man’s five friends and more: National Park crowds, up on short hikes to Irely Lake or Big Creek. A big surly middle-aged guy with a can of bear spray strapped to his big surly belt asks about if I’ve seen any animals. I tell him that I’ve seen some, and he grips his bear spray, squinting suspiciously up the hill. A couple bros in their mid-20s ask me where the trail goes, and if there’s “anything good” up there. I tell them about Three Lakes, six or so miles up, and one waves his hands, as though I’ve misunderstood. “We’re just out for the day.” Then he looks at my pack, which is about the same size as his. “Do you have a tent in there?”

The crowd thickens still further the closer I get to the trailhead: families and foreign languages, tourists who seem decreasingly inclined to say hello. What must I look like to them? I mean, shit. What must I look like generally? I haven’t seen myself since Port Angeles. I hadn’t even thought about it until I saw other people seeing me.

Soon I’m on the North Shore Road and it’s suddenly sweltering. Dusty gravel and sweat in the early afternoon sun. But the miles pass quickly: a few down to the confluence, then another seven or eight up to the Graves Creek Campground. 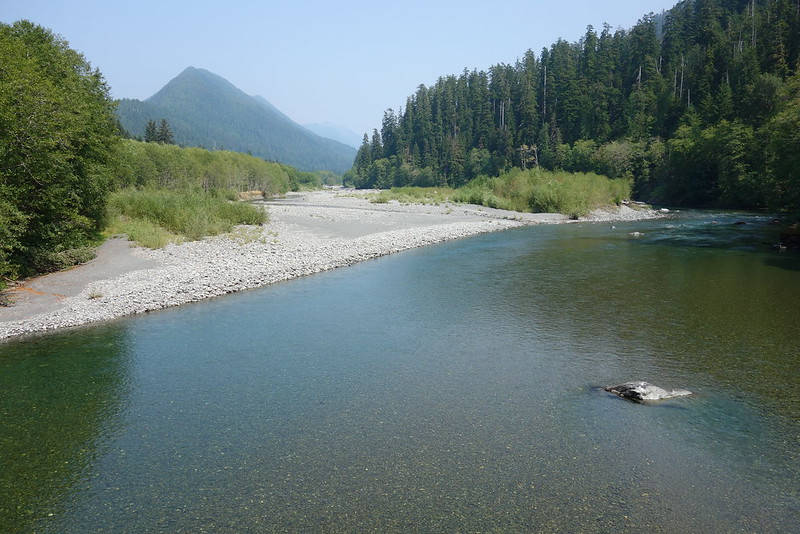 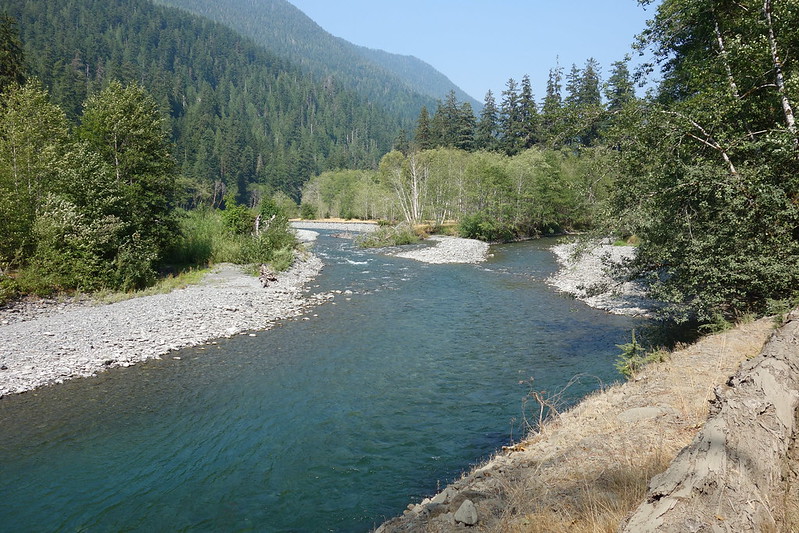 It somehow feels lonelier here than it did out in the woods. Cars pass, but, between the dust and dusty bright light, it’s hard to see inside. It’s easy to imagine they’re empty.

And I think of the old growth up in the hills, the miles of untouched trees, the creeks cascading from unnamed ridges. The kingdom of the animals. 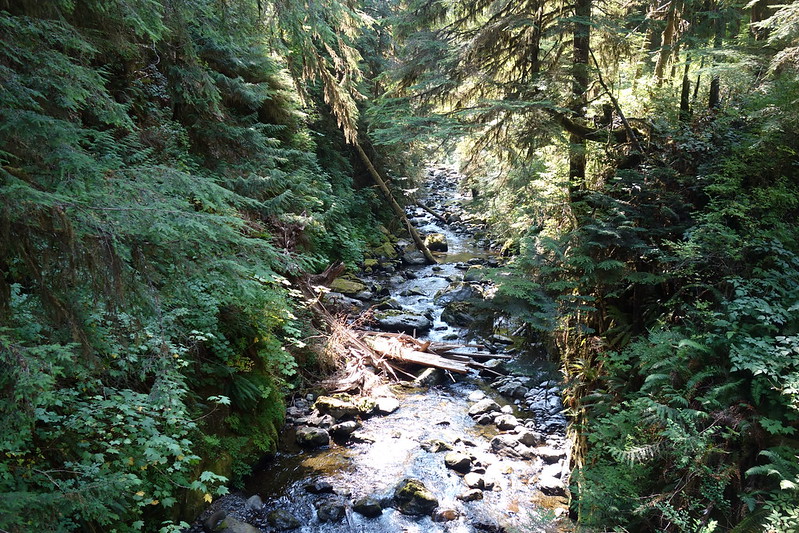 It occurs to me what strange things roads are, and cars. I guess I always know, in a background sort of way, that those things are very new: that, for most of history, the world has not contained them; that the way of organizing and relating to space and the natural world that they engender is not the only possibility. And I guess I also know what quickly follows: that there’s no inevitable logic to the industrial world we’ve made. The world has looked, and will look, much different than it does now—the small piece of time and space I’ll see in my lifetime. 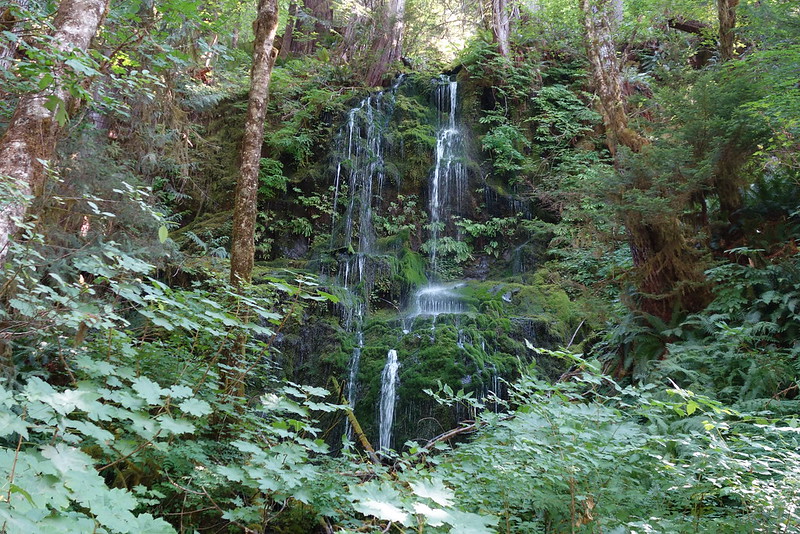 I know all of this, but I know it in the same faint sort of way that I also know that everything I’ve ever cared about is a speck on a speck in a small solar system in one of the further flung corners of the galaxy, which is itself a small piece of a small piece of just one among millions of massive galactic clusters. It’s a strictly academic knowing. I realize it’s true, but I don’t feel it. I mean, what would it even be like to feel it?

But on the side of the road, looking south up the wooded hills toward Mt. Hoquiam, I feel it all.

There’s this piece in Muir’s First Summer that I’ve never really understood. He’s talking about camping on the North Fork Merced with a flock of sheep, but then quickly drifts, as he often drifts in that book, from daily tedium to transcendental ecstasy:

Another glorious Sierra day in which one seems to be dissolved and absorbed and sent pulsing onward we know not where. Life seems neither long nor short, and we take no more heed to save time or make haste than do the trees and stars. This is true freedom, a good practical sort of immortality.

What does that last bit—“a good practical sort of immortality”—mean? Muir was deeply religious, but “immortality” here can’t be operating in the same literal way as it operates when we speak of, say, the soul’s immortal place in heaven. Wilderness cannot give us that. I think what he means is that to be “dissolved and absorbed” in the wilderness is to be enmeshed in something more permanent than ourselves and our creations, suspended in the time of trees and stars.

Of course, neither trees nor stars are ultimately eternal. They are made, and they fade. But they are part of a permanent order, a natural story that stretches back as far as time, and will go on until the end. To be absorbed in them, then, is to become part of that story, and part of that permanence.

Standing on the side of the road, looking up the wooded hill, I feel that too.

Graves Creek Campground is surprisingly crowded when I get there, but I find a somewhat secluded spot in the far corner, along the river, and setup. My stuff is still soaked, so I lay it out in the sun to dry, then sit for a while at the posh picnic table, eating a late lunch. 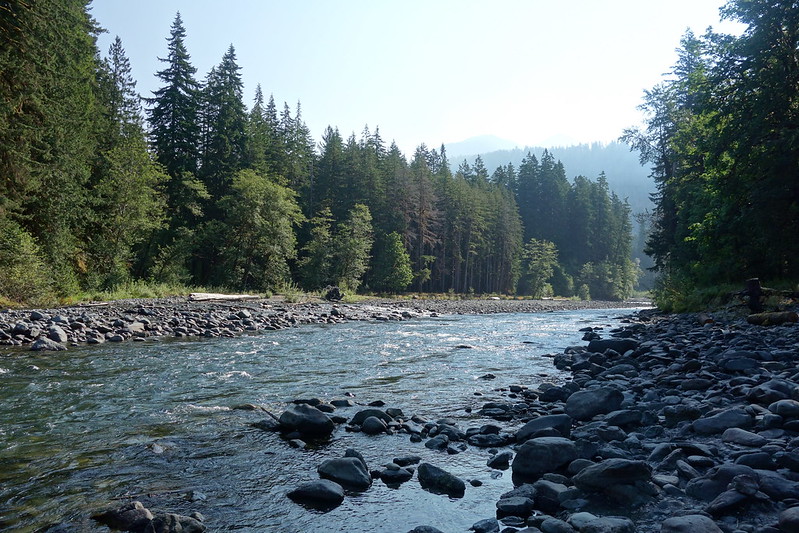 The place fills up as the afternoon wears on. A young couple—a woman in her mid-20s and a slightly older dude—take the spot next to me, pulling backpacking gear from their rental car. After a while, the woman walks over with a big bag of oranges. “Hi!” She yells from twenty feet away in a deep southern accent. “So we bought all these oranges, but we’ll never eat them all. We’ll only be here one night. Do you want some?”

I thank her profusely, tell her that I’ve been in the wilderness for a week and that fresh fruit sounds amazing. I take one and put it on the table. She looks stern, pulls out three more, and puts them next to mine. “There.” I laugh and thank her again. She tells me she hiked the AT last year, and so understands how much the “little” things can mean. I feel instantly at ease. But she disappears after a tiny bit more talk. “I’ve got to run a quick errand.” I wonder if I smell worse than I thought.

Maybe forty minutes later she’s back, pulling into my spot. She gets out and looks embarrassed. “So I always wanted to be a trail angel.” She smiles and wrinkles her nose. “And I thought this was my chance.”

She brings a big bag of groceries over to my table: beer and cookies and chips. “I didn’t know what you’d want.” I feel exactly the same way as I did on Cameron Pass: just completely overwhelmed, and completely unready to deal with this sort of generosity. But I hold it together, at least enough to say thank you without tearing up. She asks if I want a beer, and I ask if she wants to invite her friend.

I move my stuff, and we all sit around the table for an hour, eating and drinking and watching our neighbors settle in for the night. I am so, so happy.

There’s an old problem in Christian theology that runs roughly as follows. The Bible commands us to love our neighbors, but also admonishes us to avoid attachment to earthly things. How can these two stand together? Isn’t the neighbor an earthly thing, and thus something to which we should avoid becoming attached?

The standard solution, running through both Augustine and Aquinas, is that we need to love the neighbor in a particular way: not for who the neighbor is on earth, but for what the neighbor is—a being like ourselves, with a shared eternal origin outside of our earthly existences. We are all, on this view, creatures and creations (the etymologies are the same) of God. And we must love each other because we all still hold divine traces of this creation, regardless of who we become on earth.

There’s something deeply unattractive about this view: it allows attachment to the world only insofar as things in the world are not, ultimately, worldly. But the view also contains the seed of something much more hopeful. Caritas, the Latin word that both Augustine and Aquinas use for this sort of love, translates into English as charity, and carries with it the idea that we must treat each other well just because we are fellow creatures. And it is not far from the idea that we all hold some divine trace of creation to the more contemporary notion that humans, just as humans, have a common dignity, which imbues our lives with a certain worth, and our well-being with a certain significance.

Watching my new friends in the gathering dark, I realize that we are, in a deep sense, still strangers. We’ve talked about world we’re in—the park’s ridges and valleys—but I know almost nothing about them, and they know nothing about me. And yet one drove forty minutes on bad roads just to bring me some chips and beer. Maybe the shared situation is enough.

My friends drift off to bed, and I drift off to the river, to wash my legs and arms and watch the last of the light disappear. I sit out on an old piece of driftwood until the stars come out, then the Milky Way. It’s the first smokeless sky I’ve seen since before Port Angeles.