I wake up early (before the bugs!), rush through a quick breakfast, and start up the trail Six Ridge Pass. It’ll be my last pass of the trip: leaving the Quinault and its windward, west-flowing streams for the Skokomish and streams that flow east.

I have an old Woody Guthrie song stuck in my head, from those albums Billy Bragg and Wilco did of unrecoreded stuff from his library. “Unwelcome Guest.” And I keep thinking of something Sullivan says somewhere—maybe Listening for Coyote?—about wilderness being a place where we can be, at most, visitors.

The trail up to the pass is a preview of the day: up and down small domes and ridges, sidehilling on eroded tread. It’s beautiful. Flowers flow down the hillside in a joyous, jumbled mess, overlapped and overgrown. Birds are everywhere, flying through the trees and bushes and grass, singing every song all at once. And the smell: just-ripe berries, blooming flowers, and fallen cedars. It’s like the Elwha elk: the world feels unusually close, almost as though it’s holding me. 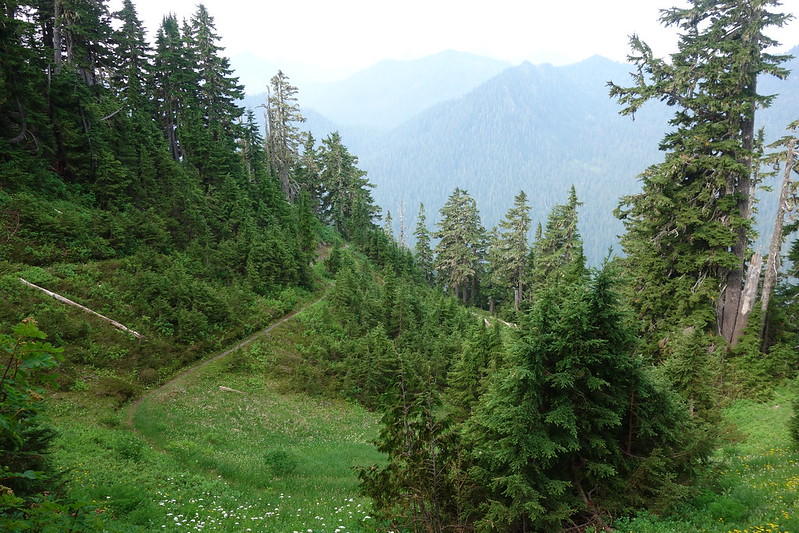 But of course all this majesty can only be maintained by my absence, by all of our absences. It’s this way because the place is mostly just left alone, because we have promised not to make ourselves at home here. The fleeting feeling of visiting, but also knowing that one can only be a visitor, is not an accident, or something that can be overcome. Leaving is part of the deal, perhaps the most important part of the deal.

From the pass, the scenery opens up to the south, and it’s a different world. I’ve spent the last two weeks surrounded by a park that’s more than 95% designated wilderness. But from here, looking south, I can see into the National Forest: the hills and ridges look roughly like this one, but they’re ravaged by logging. Old spurs roads that were blasted in then abandoned.

Turning down, to the southern slope of Six Ridge, the trail more-or-less disappears. I’ve been warned about this. This is one of ONP’s “primitive trails,” like the Skyline. It hasn’t been maintained in years. And even if it did get maintained, avalanches apparently fall so readily from the ridge that the path would be destroyed in a single season. 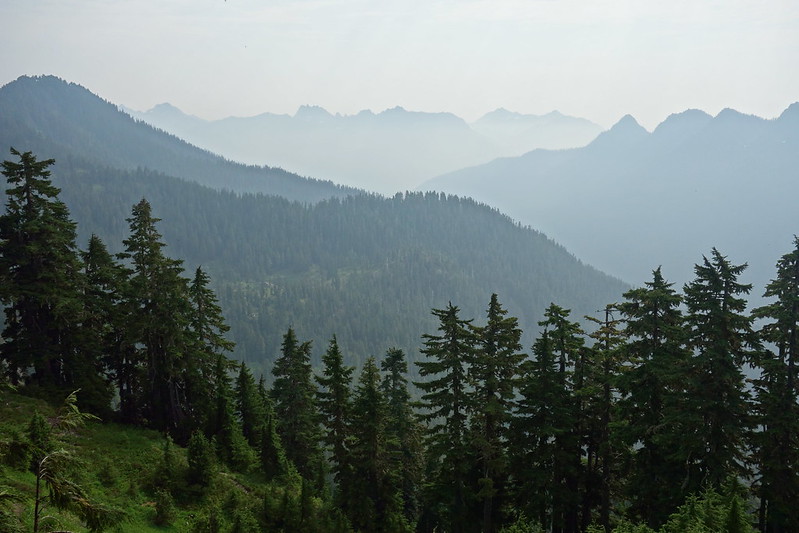 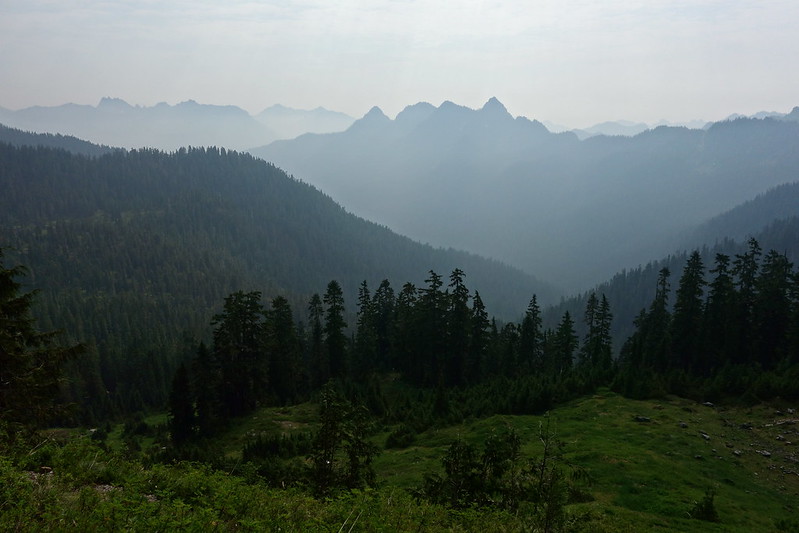 So I follow a series of small indentations in the overgrown underbrush down to a meadow, on the far side of which is an obvious old camp, then search around for my next step. I can just barely make out the top of a tall cairn, poking out through the taller grass a couple hundred feet away. I follow more slight indentations to it, then scan for another. 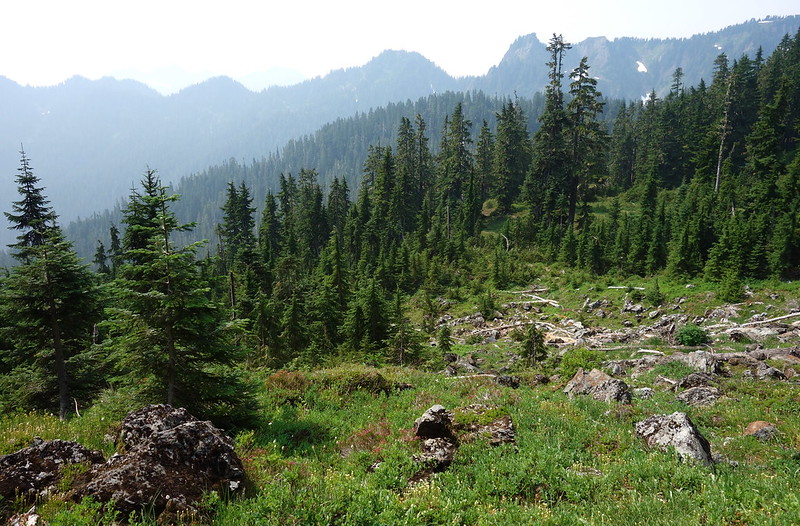 Most of the morning passes this way: hunting from cairn to cairn in overgrown meadows. Every now and then, the meadows are interspersed with steep, wooded spurs that stretch down from the main ridge. In the trees, the trail is marked with a fascinating variety symbols: burns, small florescent orange signs, and old spools that look suspiciously like they’ve been taken from fishing poles… 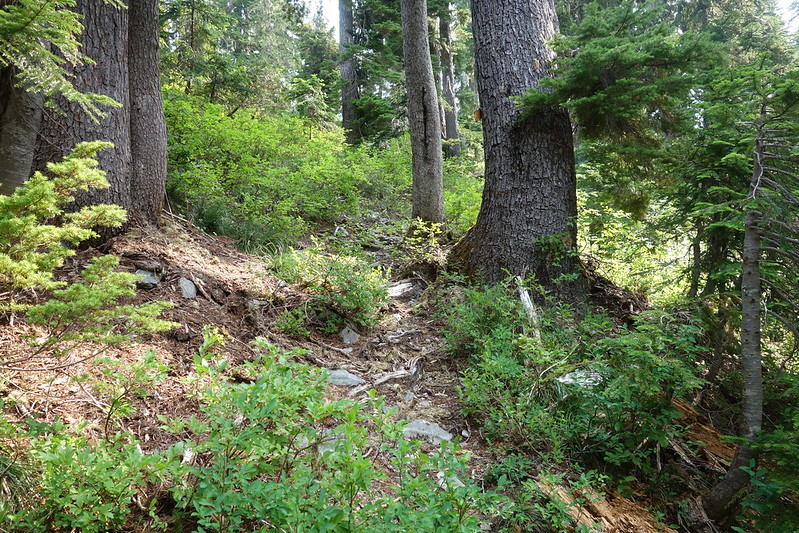 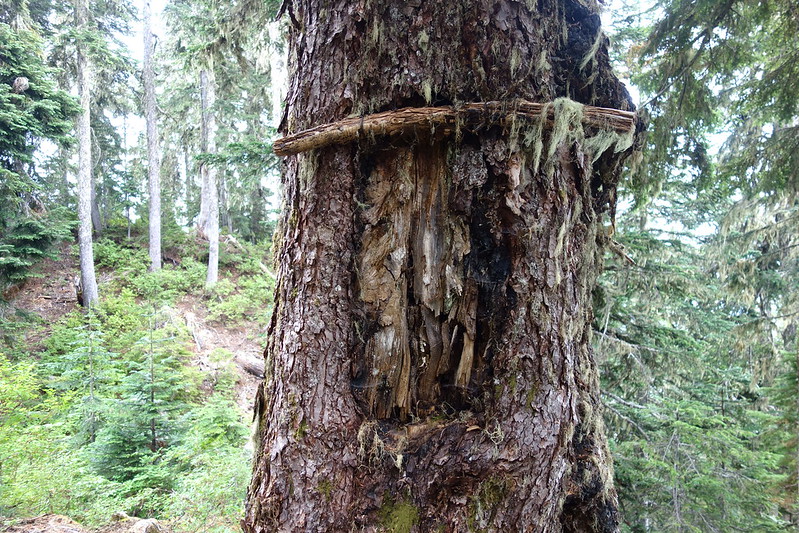 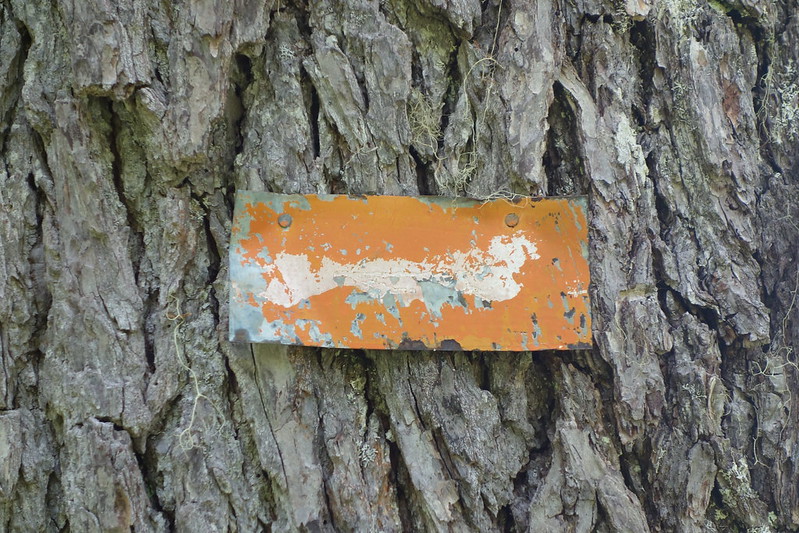 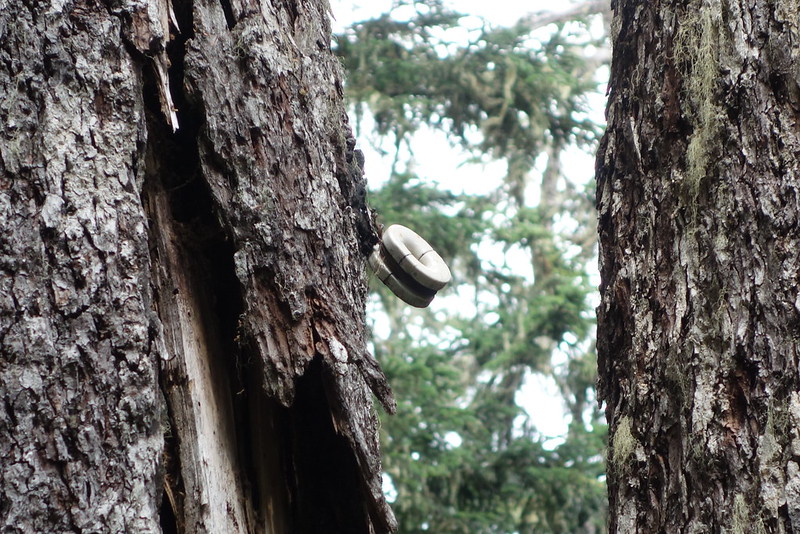 There’s an old camp at the McGravey Lakes, and another with an ancient sign calling it “Belview.” The trail gains the ridge proper a few miles later, and there’s yet another sign, “Mt. Olson Way Trail,” with an arrow pointing into a thick tangle of bushes and blowdown. 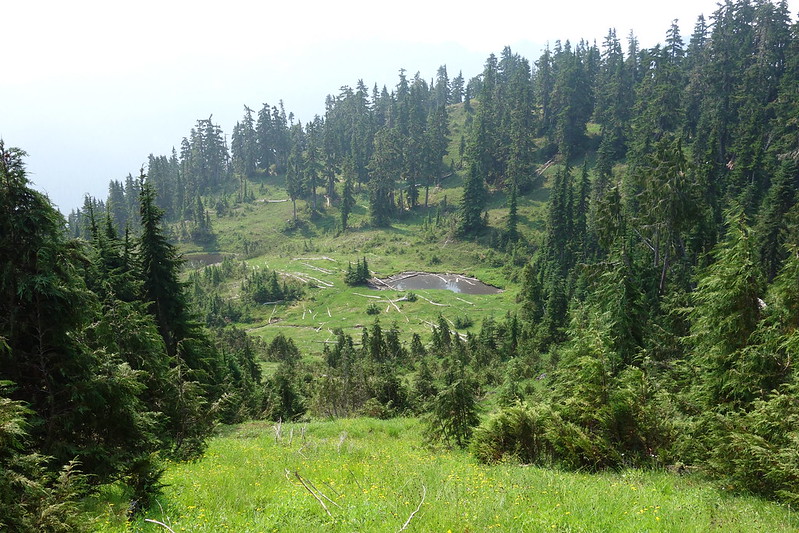 From the Mt. Olson Trail—or at least what’s left of it—the path sticks to the sawtooth top of Six Ridge. We’re trending downward now, to the Skokomish, but there are so many little hills that the net change is anyone’s guess. 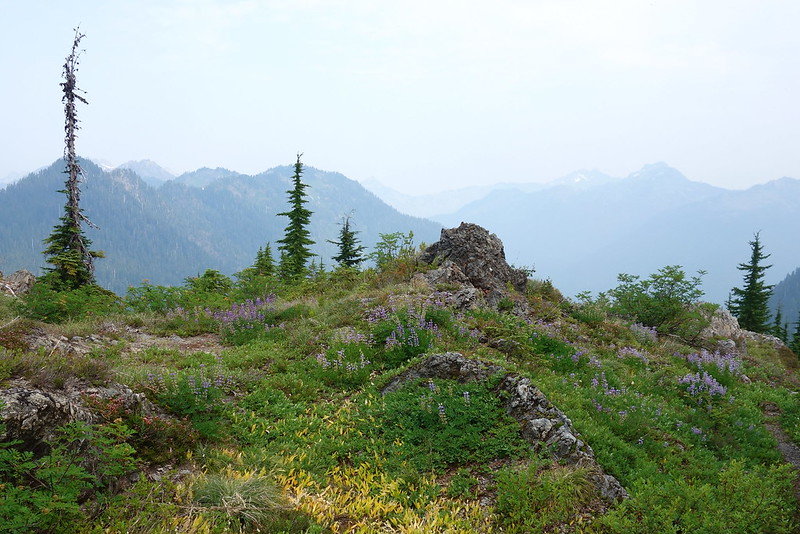 Clouds come, then a little rain and distant thunder. It’s the first storm I’ve had on this trip. A couple claps of lightning hit the next ridge down. Just as the weather seems to be turning to me, I see a faint glimmer down the way. Lake Cushman! 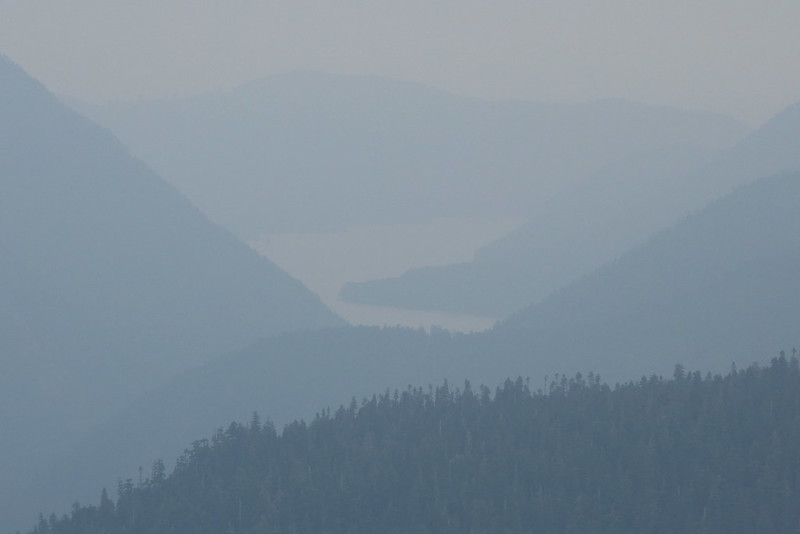 The meadows fade, first to a jumble of huckleberry bushes, then to a thin forest of hemlock. The trail’s still faint, but it’s much better than it’s been. The miles start coming easy. The rain picks up, but never comes to much, and I hum my way down the hill, the whole time thinking of home. 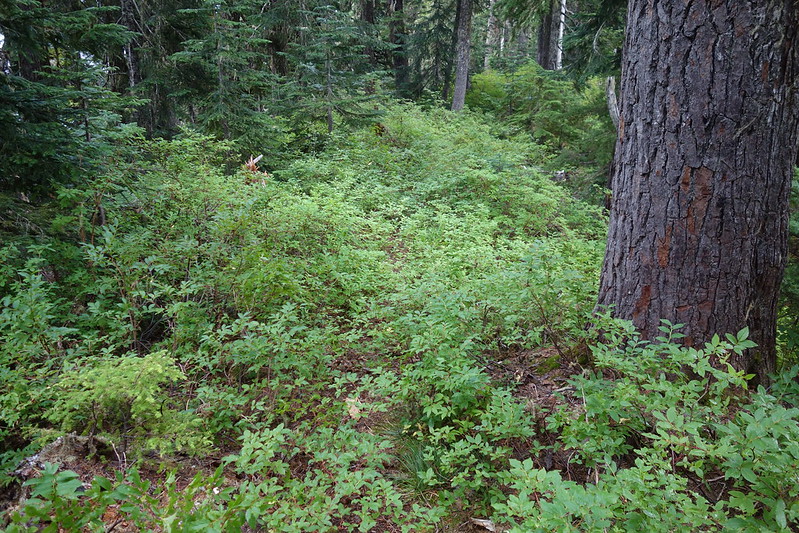 A few miles of steep switchbacks later, I’m at the Skokomish, jaunting north to cross Seven Stream. The crossing’s not bad, just a rock hop and a mostly-dry log. And on the other side is the most beautiful camp: space for a dozen tents, all overlooking the Seven Stream – Skokomish confluence. 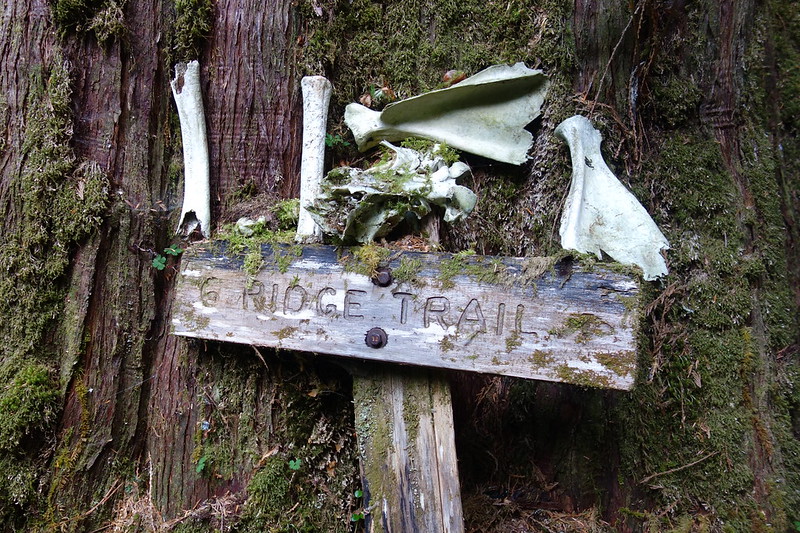 I set up in an old growth grove of cedar, then set out doing all the usual camp chores: filtering water, getting things set for dinner, washing a little blood off my legs. Someone’s built a bench overlooking the river, and I sit for a long time—through dinner, and a delightful desert of all the extra odds-and-ends I haven’t eaten—watching the day’s last light dance on the rushing river. 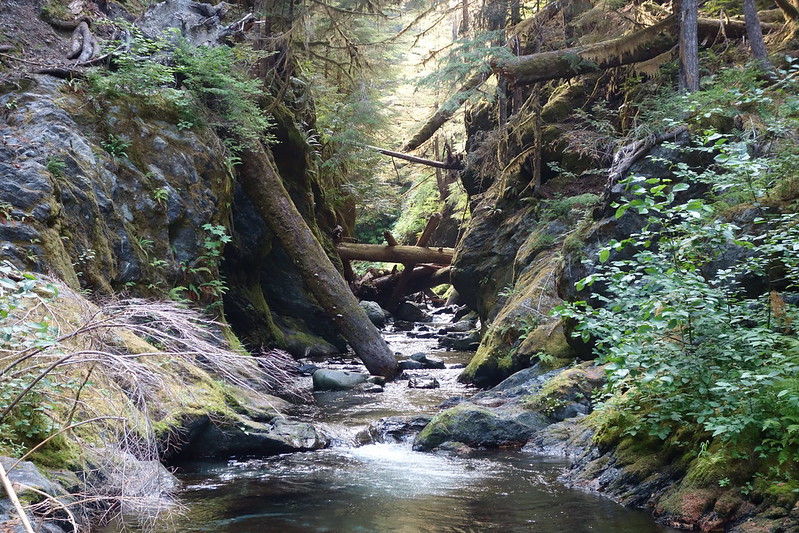 I think of the headwaters high up in the hills, the bare-rock basins and fields of ice, of flocks of birds and herds of elk, families of deer and lone, bumbling bears. My own bumbling attempt to see it all. The places I will never see. The untouched places I maybe should never see.