The day begins with a half-dozen deer running through woods, from the hills above to the river below. I poke my head through the door of my tent and watch as my friends from last night thud through the thin forest just a few feet from me.

This place is fucking magic. 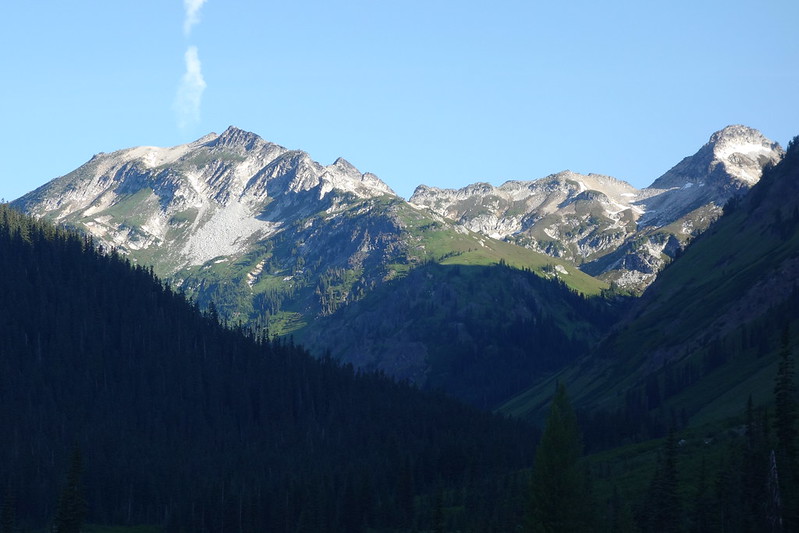 Then the usual morning chores: down to the river to filter some water, a quick breakfast at camp, stashing my food for the day in the outside pocket of my pack.

The trail this morning’s overgrown, but considerably better-tended than the one on the other side of the Napeequa. It sidehills for a long time—through avalanche tracks full of lilies and lupine, and bits of old-growth cedar—before switching back and climbing more seriously toward Boulder Pass. 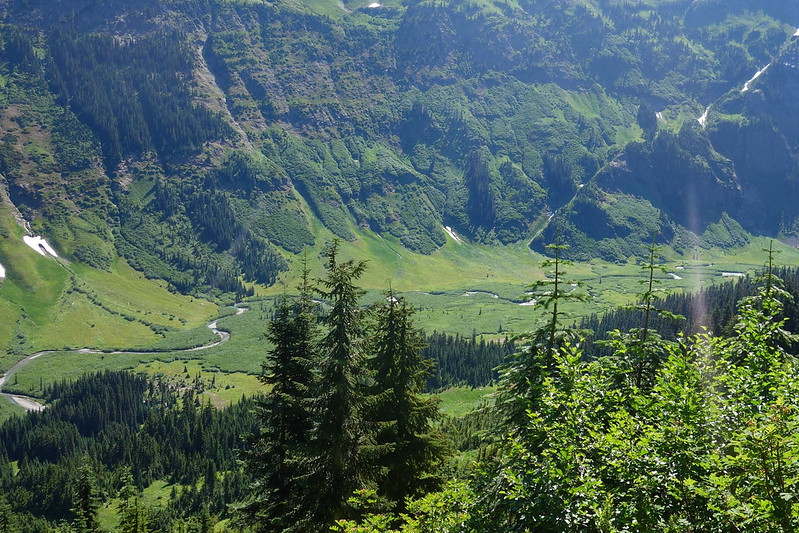 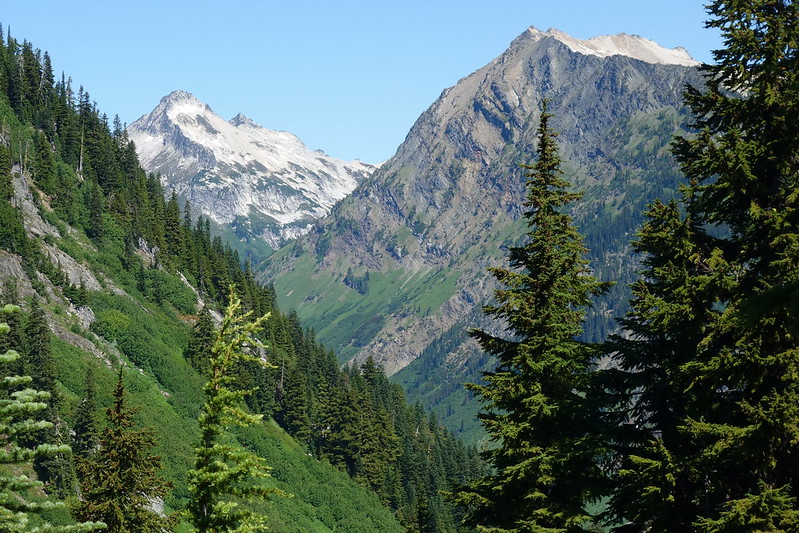 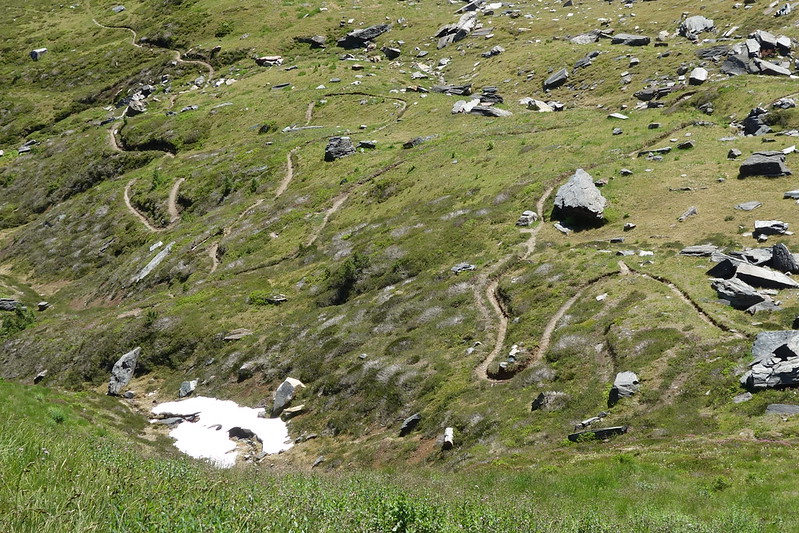 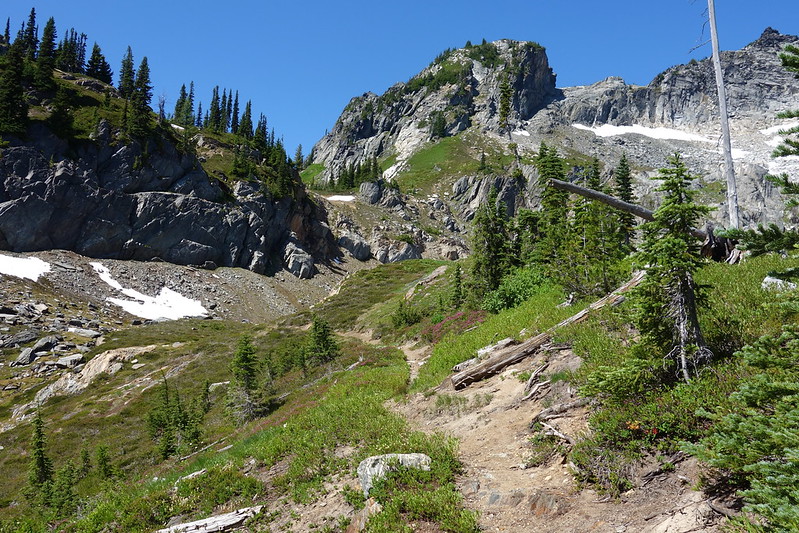 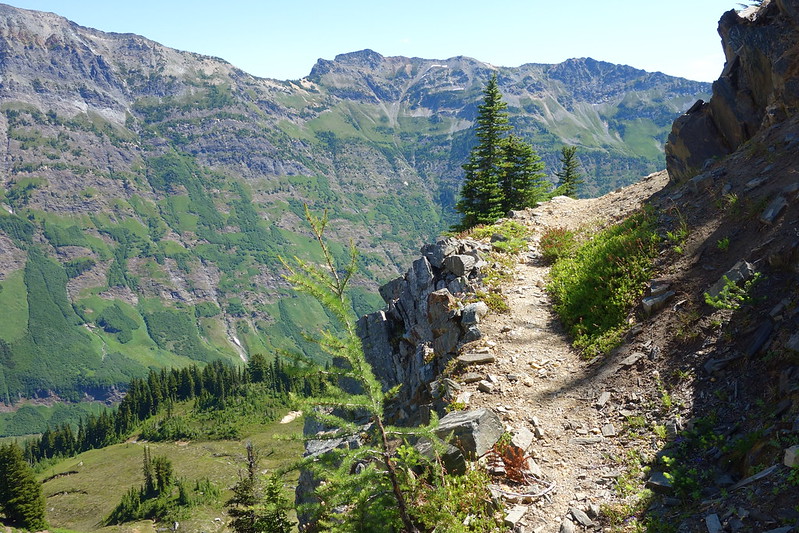 Leaving the valley feels a little wrong, like I’m not done here yet. I promise myself I’ll be back soon.

The pass is a broad chain of meadows settled between White and Clark Mountains. To the west, a series of springs stream together to form Boulder Creek. I sit for a while among the headwaters, eating almonds and watching a pair of marmots chase each other through the blooming heather, then follow the creek down through a few cliff bands to Boulder Basin—a wide blooming bowl, lined with granite towers and more avalanche tracks. 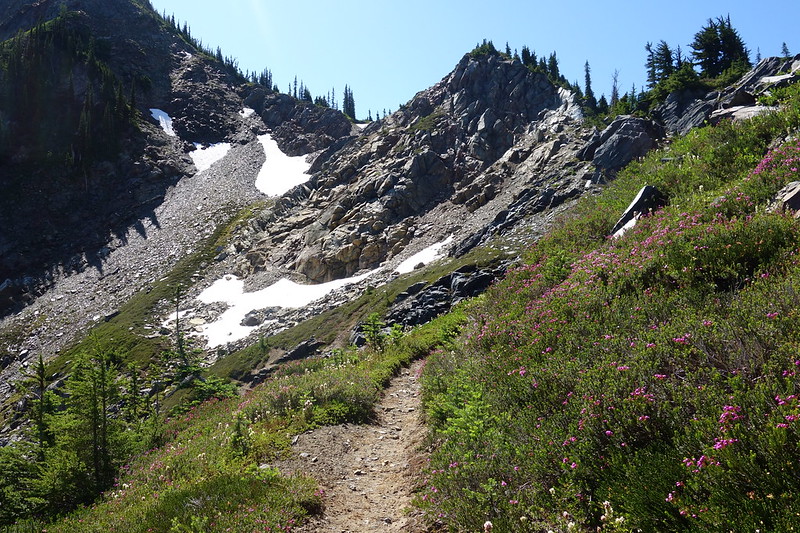 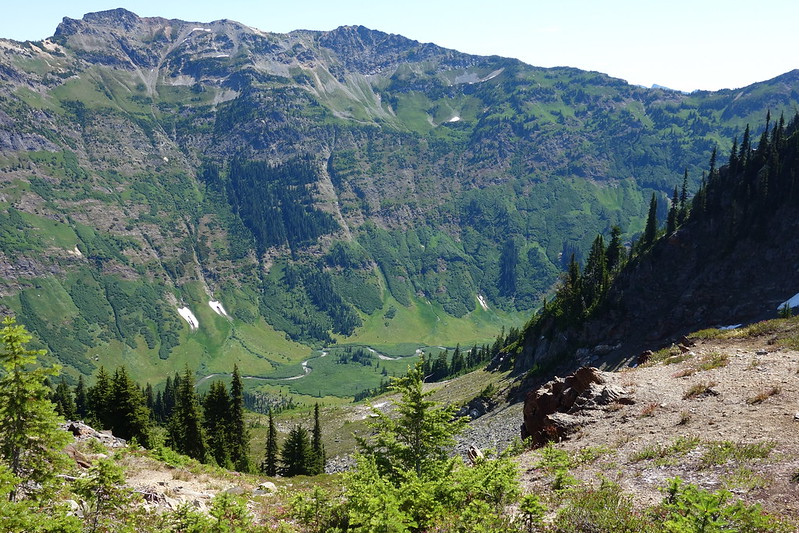 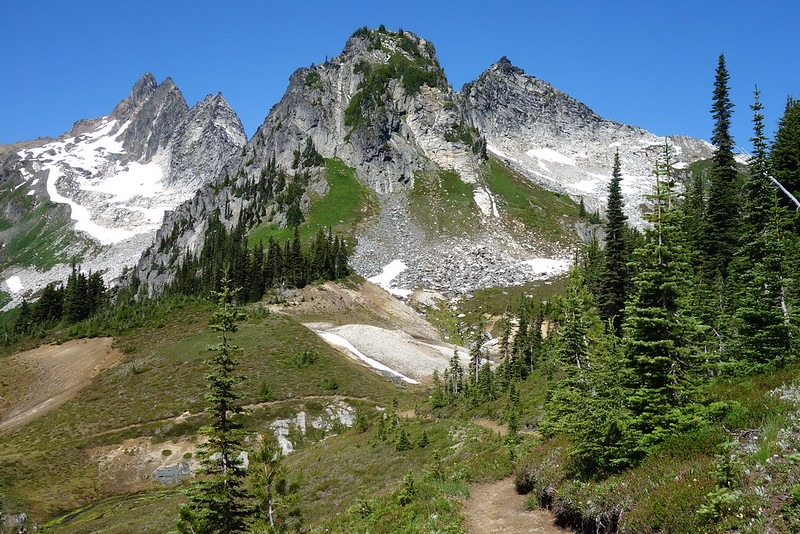 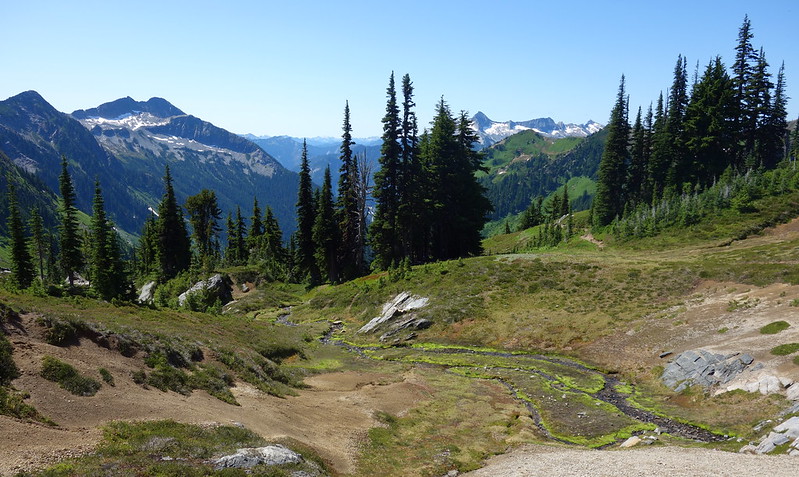 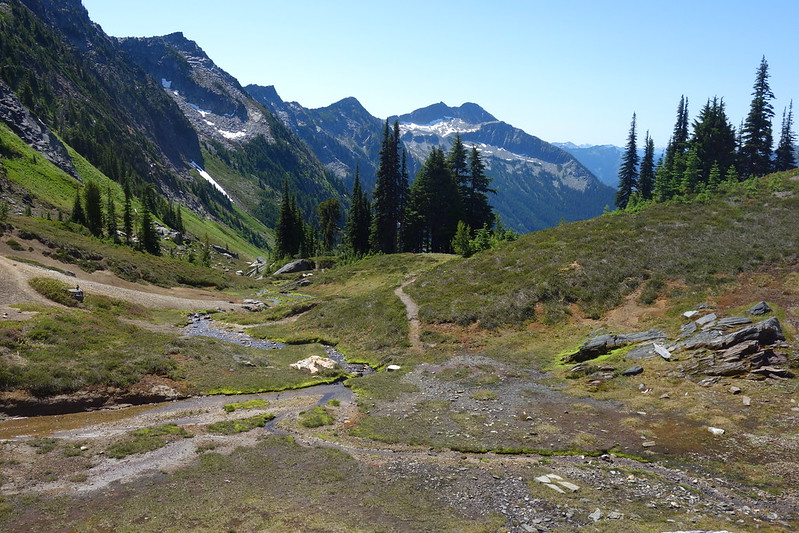 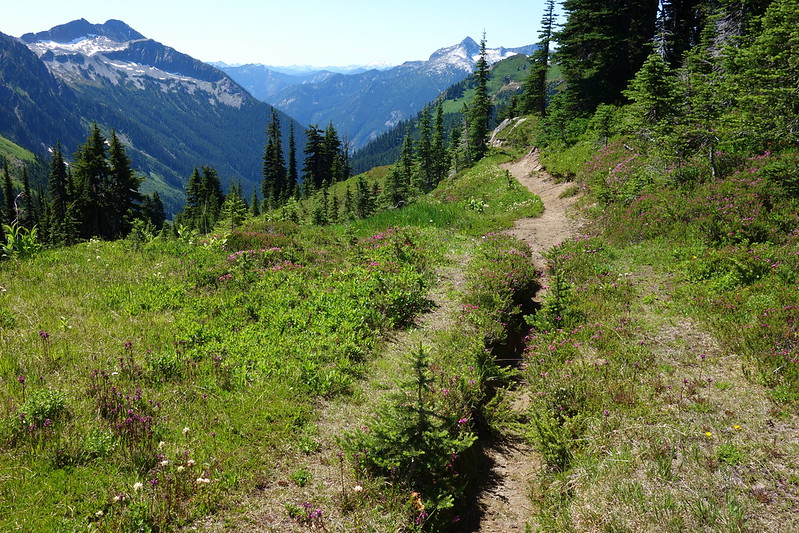 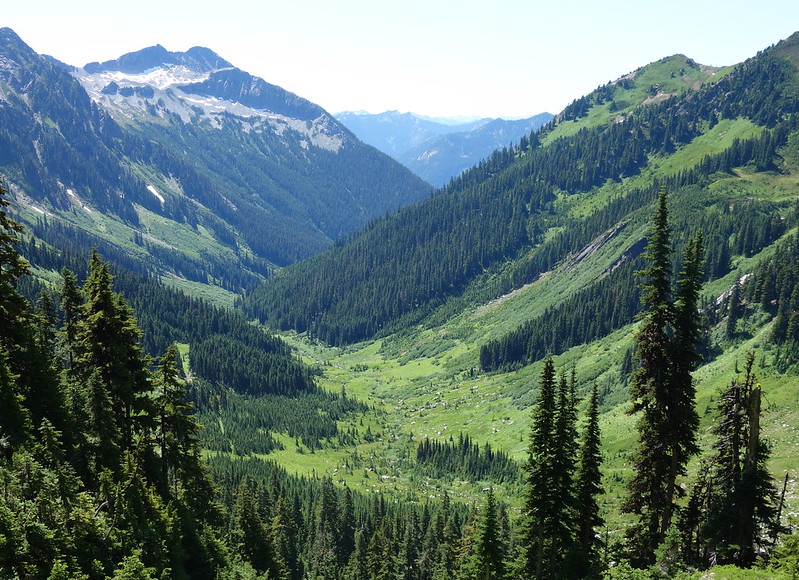 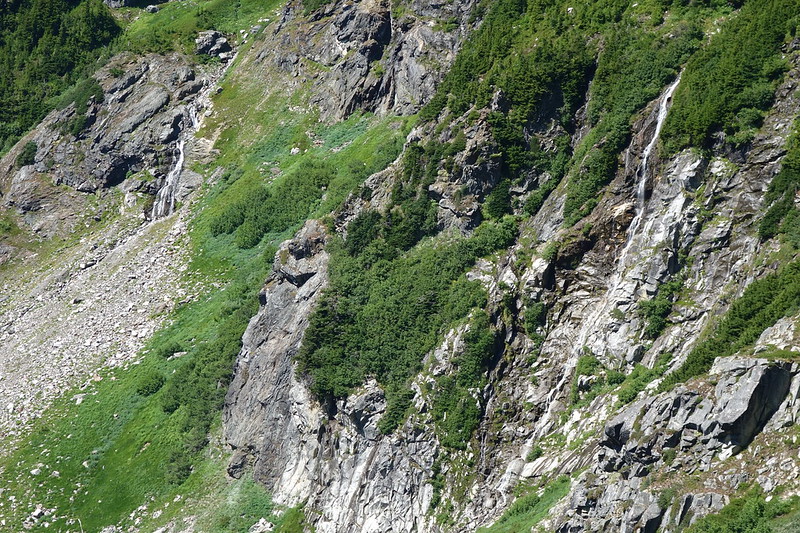 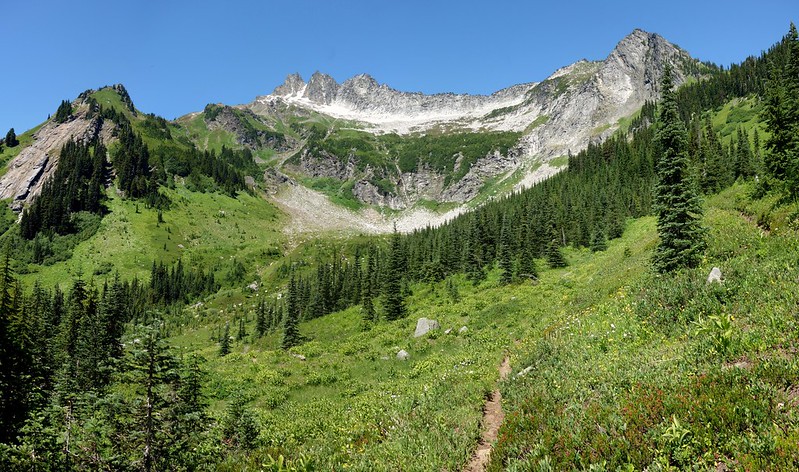 The trail disappears below the Basin in a confusion of talus and chest-high tiger lilies, but the terrain is easy enough to follow, and soon I find myself back on the path, descending to the White River through a cool stand of fir. 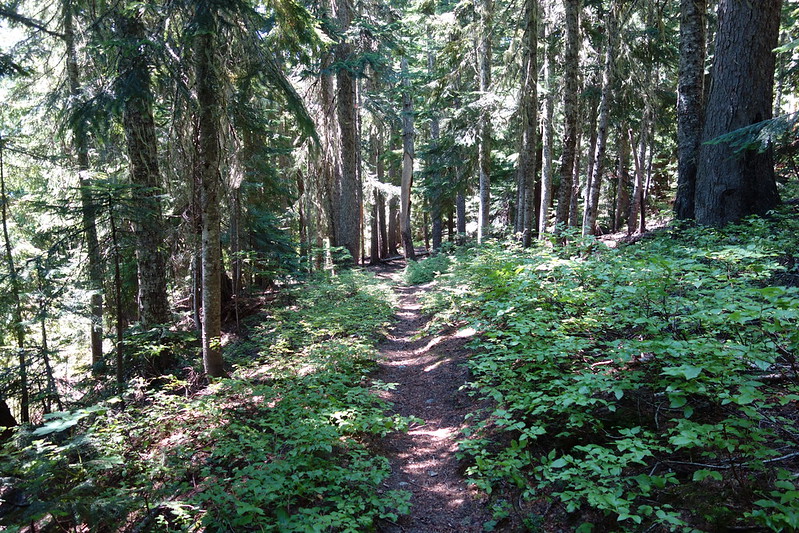 I stop for lunch along the River, and think through my options. From here, the trail continues down the River for five or six miles, then crosses on a good bridge and heads back up the other side another five or six miles to Indian Creek, where it turns up, toward the PCT. If I can somehow wade across and find the trail on the other side, it’ll save me ten miles of overgrown tread. But the river is wide and deep and fast. 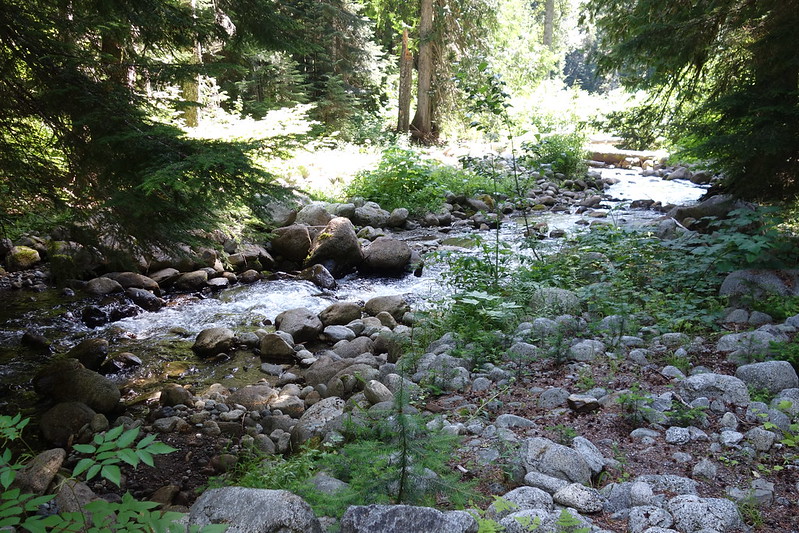 I walk down the River for a few miles, looking for a safe place to cross, and eventually find a broad, relatively shallow eddy, where the water runs quick over well-rounded rocks the size of bowling balls. No way to know if it’s doable other than to try to do it, so I take off my pack, drop it on the shore, and worriedly walk in. It’s tough to get traction on the slick rocks, but the water’s not too fast, and soon I’m to my waist just past the halfway point, then soon again at the opposite shore. I turn back, put on my pack, and do the whole thing again, a bit more gingerly. 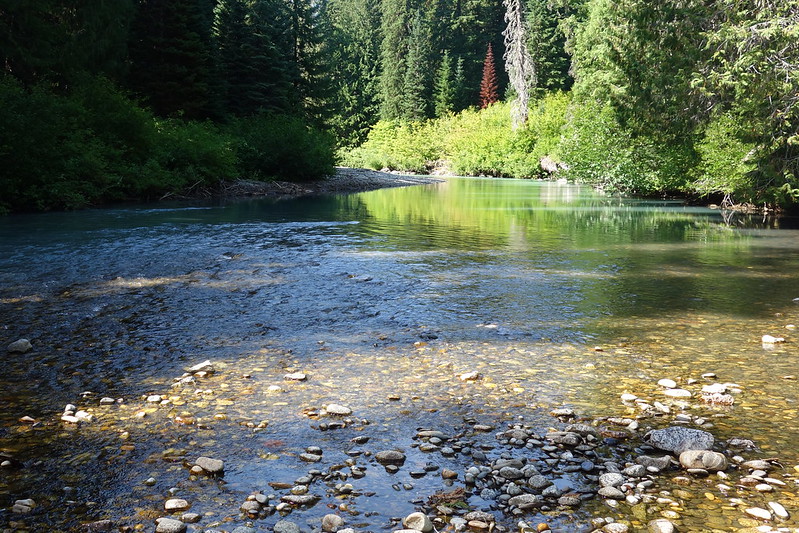 The opposite shore’s a tangle of devil’s club and fern, and it takes me twenty minutes to thrash through a quarter mile of it to the trail. But I do eventually find the trail—here a series of moldering old puncheons—and happily follow it to an ancient, overbuilt bridge across Indian Creek. 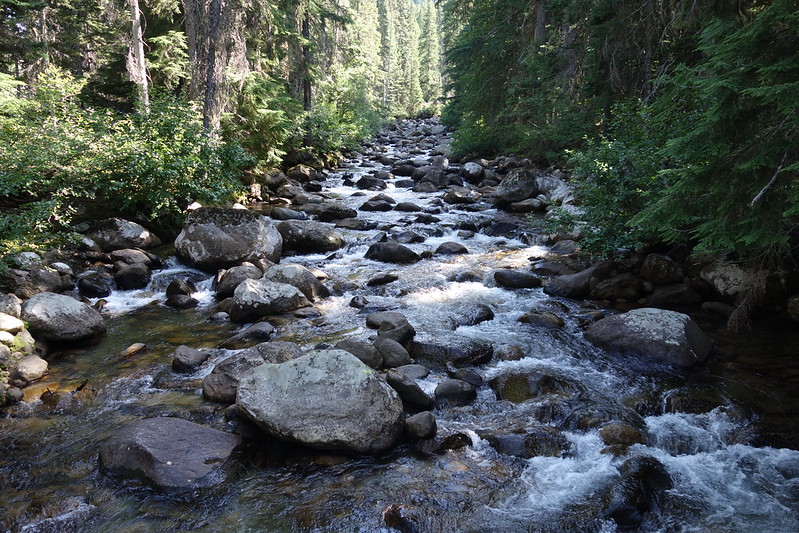 From the bridge, the trail climbs steeply up a series of decreasingly clear switchbacks, then promptly disappears wall of willow, huckleberry, and nettle.

It won’t really reappear for another dozen miles.

Indian Creek flows down a wide, flat glacial valley, lined on either side with steep granite walls. The trail, insofar as there is a trail, zigzags up through thick foliage and across unstable new rockslides. I startle a bear, then several deer, then some sort of large cat. 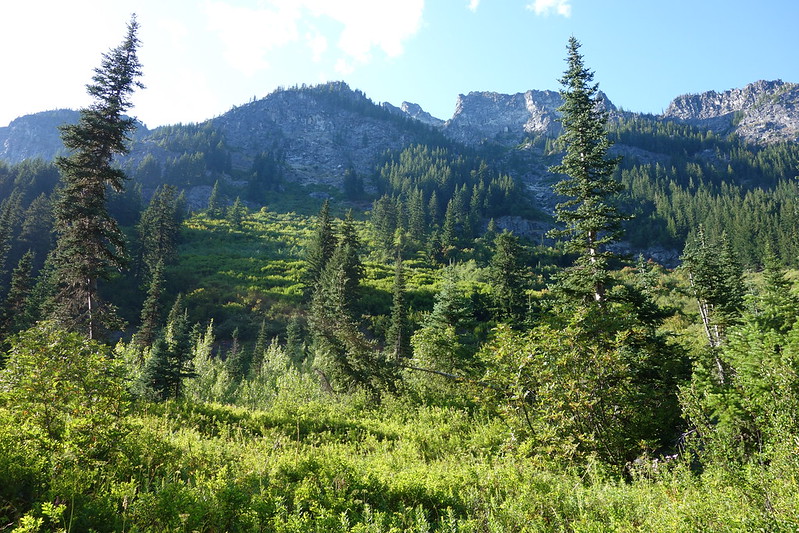 I try, for the first four or five miles, to follow something like the trail’s original tread, but eventually give it up, and just try to walk where the trail ought to be. More often than not, it seems it actually was once there. 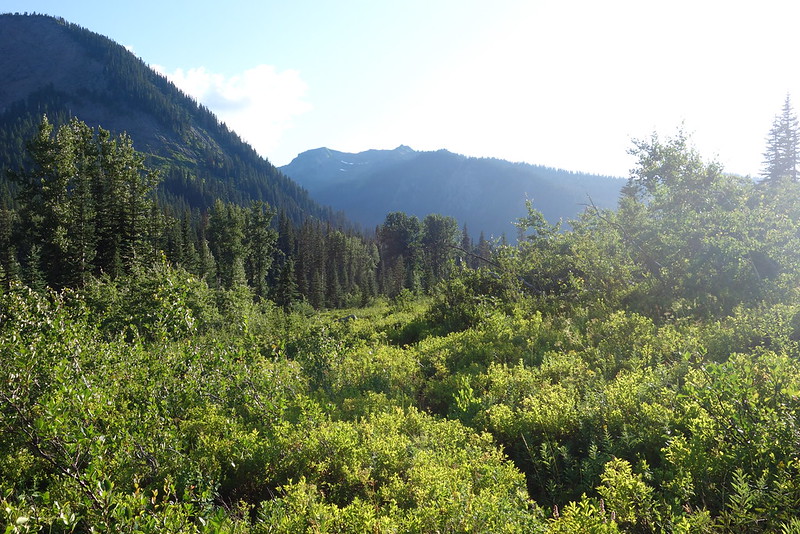 The sun begins to set, and I resign myself to somehow night-hiking through this. I’ve been bushwhacking for nine or ten miles, and haven’t yet seen a single place where one could even conceivably put a tent, or even just a sleeping pad. Also, my legs are covered in blood.

Maybe I just hike through the night? 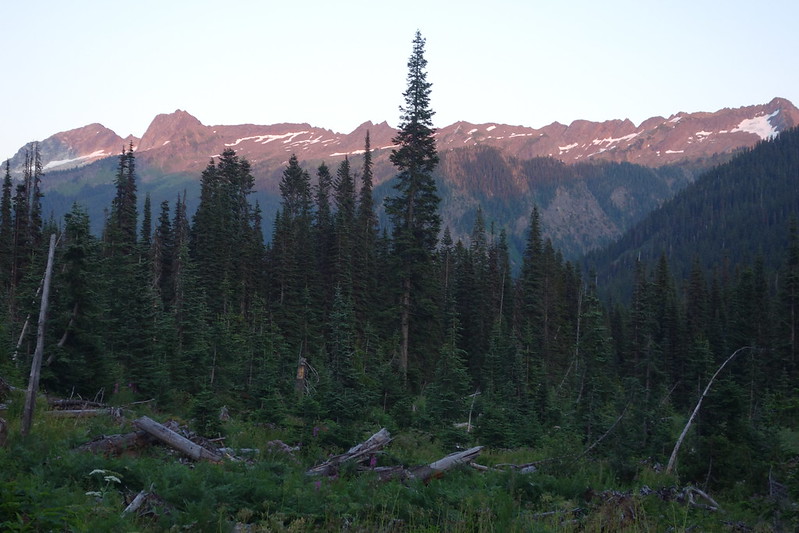 The sun sets for hours. Light climbs up the hills and the sky goes from blue to red and back to blue. I startle another bear, but this one moves more slowly.

We’re all getting a little tired.

Just as I’m fidgeting with my headlamp to get ready for the night, I bumble on an ancient camp—several large clearings, a mossed-over fire-pit, and even a nearby stream. I start to cry with relief.

I set up in one of the clearings, wash most of the blood off my legs, and make dinner by headlamp as the first stars start to shine. As I take my first bite, I hear half a heard of elk thundering through the clearing just ahead—down, I think, to the creek for an evening drink.

We’re all getting a little tired.

I sit out until late, eating and drinking and watching the stars.

There’s this magic trick that places like this play. The visitors stop coming, then the trails fade and with them all evidence that we’ve been here. The wild returns, as though it never left: the cats and bears and elk. The world as it was. The real world, the one that seems to stand still, from the vast past to the endless future, whenever we leave it alone for long enough.

I sit out and watch that world, a little blood still clinging to my legs, and begin to fall asleep in the dirt.

One thought on “Around Glacier Peak, Day 2: Nunc Stans”