After we got back from Glacier Peak, we were only home for a few days, then left again, this time for the South Sierra, with a permit to enter over Shepherd’s Pass (on the east side, between Whitney and Forester Pass), then walk south for a bit—sometimes on trail, sometimes off—and exit via the Cottonwood Lakes.

We wake up at six and start the now-familiar drive south: down I5 to Eugene, over Willamette Pass into Eastern Oregon, through the high pine desert to Klamath Falls. We’ve only done this three or four times, but we already have traditions: coffee and donuts when we start; a rest stop right when we meet 97; another stop in Klamath Falls for gas and coffee and supermarket fried food.

Then into the endless expanse of northeastern California: down the edge of the Lava Beds National Monument, through warehouse villages full of potatoes; past a dozen tiny towns, most just a building or two, maybe a sign; along Eagle Lake, this time full of antelope and egrets.

We join 395 at Susanville, and follow it further south, past Honey Lake and evaporating expanses of desert into Reno, where we stop again for gas and sandwiches for later.

Then into the Sierra. We have this tradition: as soon as we enter Walker River drainage, Krista puts on Huey Lewis’ Greatest Hits, and we sing along for 22 songs. Like a lot with us, it started as a joke, but quickly became something we legitimately love.

The relatively wet winter has left us with a summer largely free of fires, and the Sierra Crest, when we finally see it just south of Bridgeport, is crystal clear, crowned with fields of snow.

The sun sets for hours as we speed past Mono Lake, then past Mammoth. The Owens River’s still flowing this summer, for the first time in recent memory, and the red sky’s joined by bright green in the bottom of the valley.

We rattle to our rat-trap motel just before nine, watch an hour of trashy TV, then fall immediately asleep. I dream of the Sierra. It’s always a dream for me.

The next morning is bright and already hot by half-passed eight. We slalom through the breakfast buffet to find bagels and bananas and something almost like coffee, then start a meandering drive south.

The plan today is to drive up to the Horseshoe Meadows Campground at 10,000’, setup in a walk-in spot, and spend the night at altitude, trying to acclimate.

The last time we were here was the first day of the JMT. As we drive up the narrow road now, memories come tumbling down the hill: the impossible freedom of leaving our car, not to see it for a month; the heavy smoke that made us want to stop before we started; our nerves waiting for the shuttle; the strangely sandy trail, which mixed with our altitude sickness to make it feel like we were walking in molasses.

We reach the Campground and easily find a spot on the far south side, at the outer edge of the pines. We set up our tent, and I walk to the bathroom—walk through crystalline memories of queasily sitting in this parking lot, barely able to breathe. Sitting in the stall, I start to cry, but don’t realize it until I walk out into the high desert wind and feel the water on my face.

The rest of the day passes quickly: we shuttle back down to Lone Pine to pick up some food, walk through the Alabama Hills, climb back up to camp for dinner, and to watch the sun set over the Sierra crest—here just a small hill a mile to the west.

I feel sick from altitude for most of the night—sore head, sick stomach, slightly weird thinking—but wake up feeling something almost like normal.

Our shuttle up to the Shepherd’s Pass Trailhead’s not coming til mid-afternoon, so we spend the day lounging: eat a long breakfast, play some cards, take a full hour packing up our tent, ramble around the campground and stream-studded meadow below.

Right on time, our shuttle—Paul from Eastside Sierra Shuttle—pulls up in a deeply weathered Range Rover. This is our third time with Paul, after the JMT in 2015 and our ramble north of here in 2017. He doesn’t remember us, of course—he shuttles thousands of hikers every season—but we remember him well, and feel a sense of comforting familiarity as he tells the same stories, gestures the same ways.

We cruise down to Lone Pine, up to Independence, and onto the startlingly bad road that leads to our trailhead. Getting through some of the sections seems to stretch some pretty basic laws of physics, but we do somehow get there. We get our gear from the back, say a strangely stunted goodbye, and then we’re here again—in that free place with nothing between us and our car but miles to walk.

The trailhead is low by Sierra standards—right around 6500’—and it’s warm down here, even in the fading light. 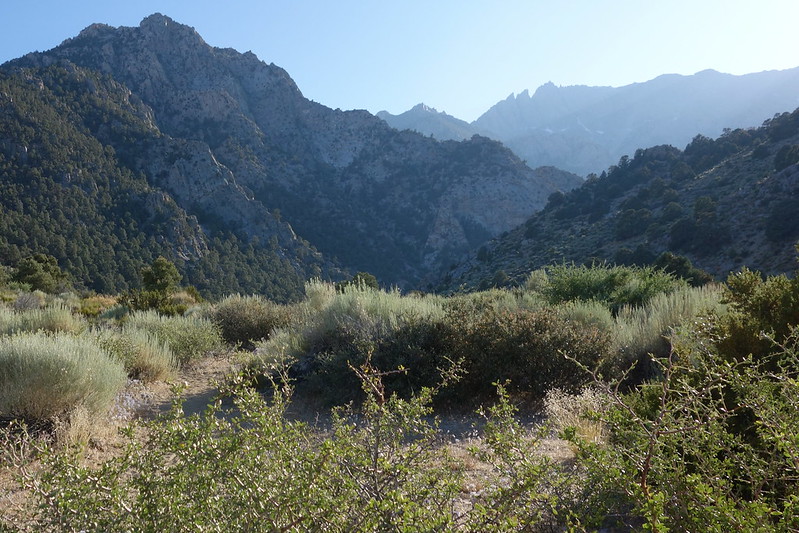 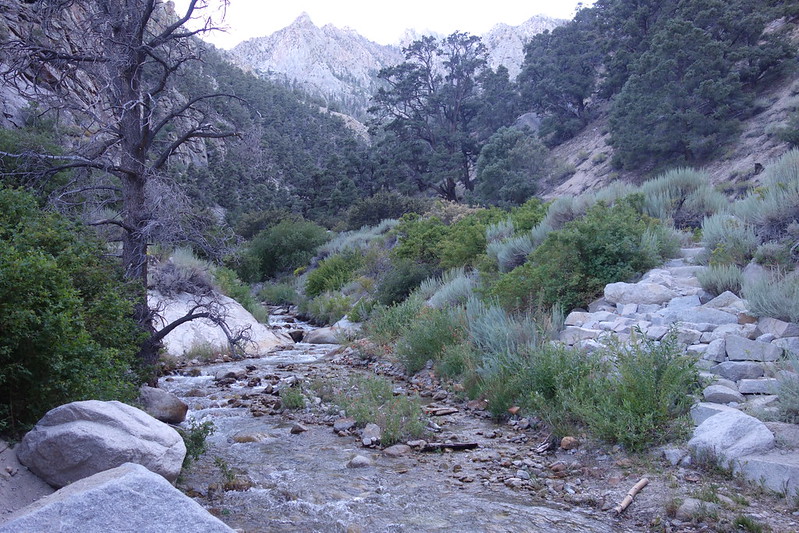 We follow Symmes Creek through its narrow, willow-choked canyon for the first two miles, crossing twice. Each time, the stream is fast but shallow and warm, and a welcome respite from the dusty evening heat. Then we leave the canyon, and switchback steeply up the near-sheer divide that separates Symmes from Shepherd Creek. 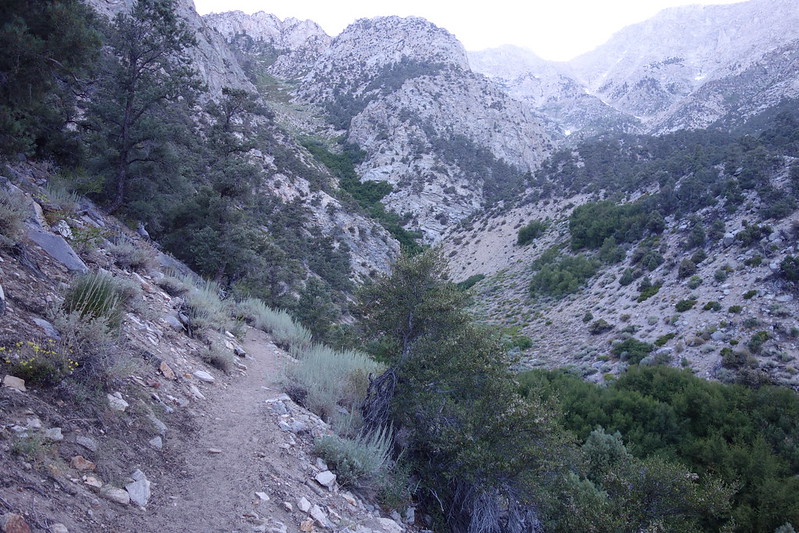 Halfway up, we reach a beautiful overlook that stretches like a pedestal from the hillside, and we pitch our tent toward the sunset, watching red crawl down the mountains as we eat our little bagged dinners. 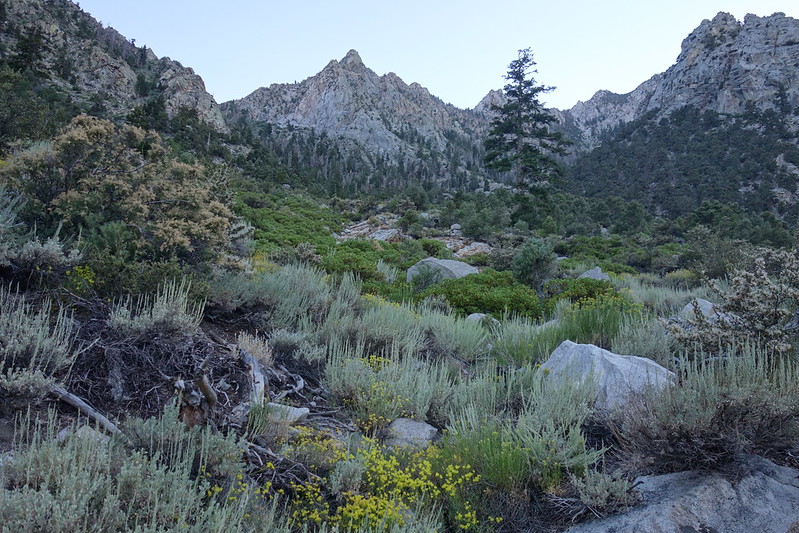 The next morning’s enchanted. The sun chases us out of Symmes Creek, up to the unnamed pass that separates it from the Shepherd Creek drainage, then we follow the beautifully faded trail as it sidehills steeply below Mt. Keith and the main Sierra crest. 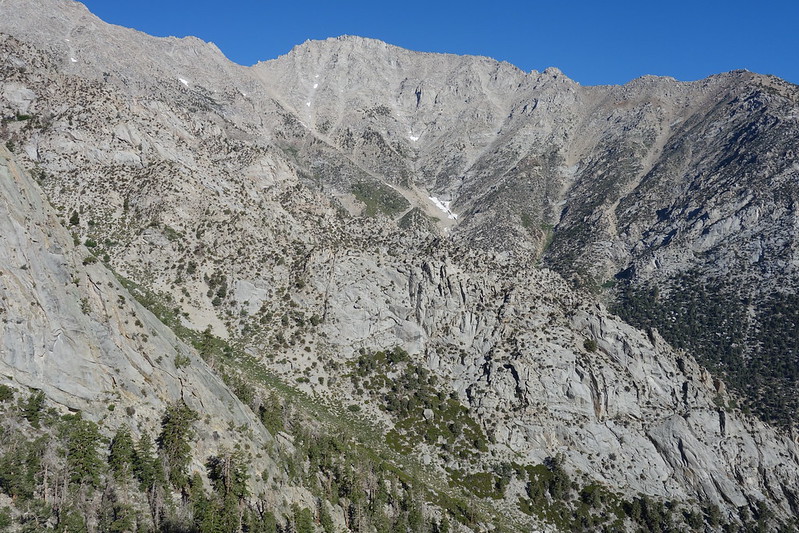 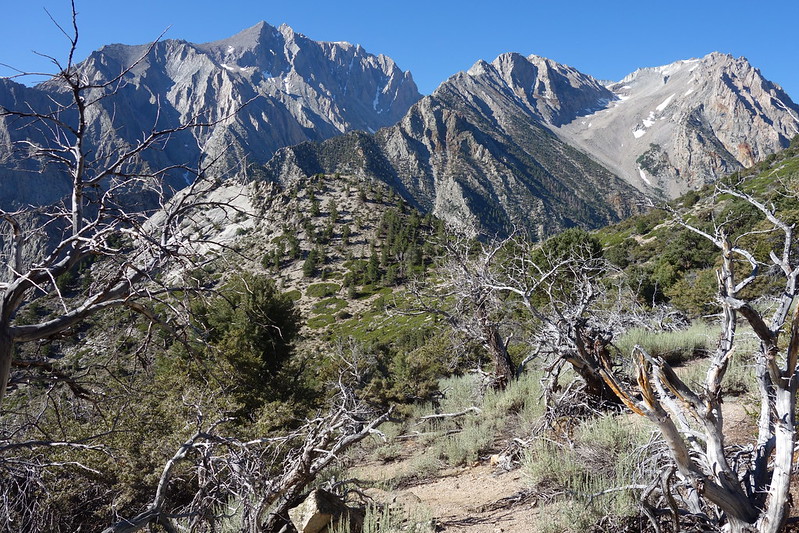 Five miles in, we stop for breakfast at an overgrown oasis—our first water since last night. The stream here’s a continuous waterfall, flowing from five thousand feet above to a thousand feet below. There are more birds than I can count. 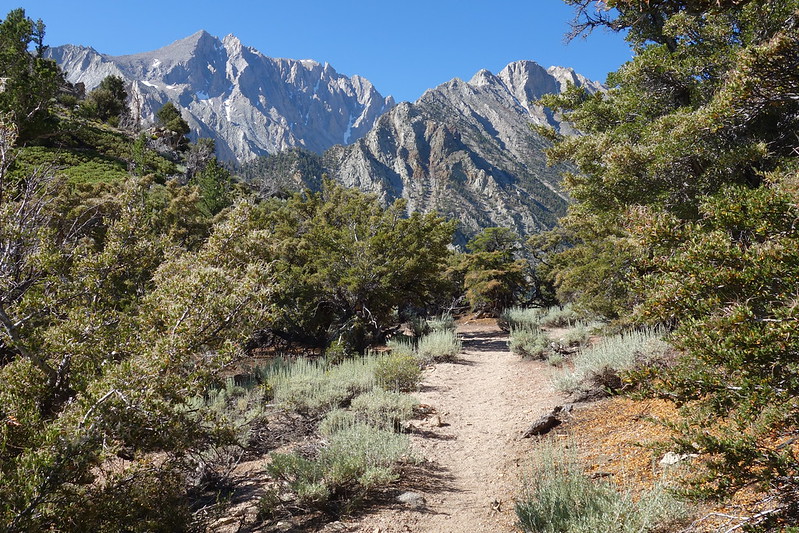 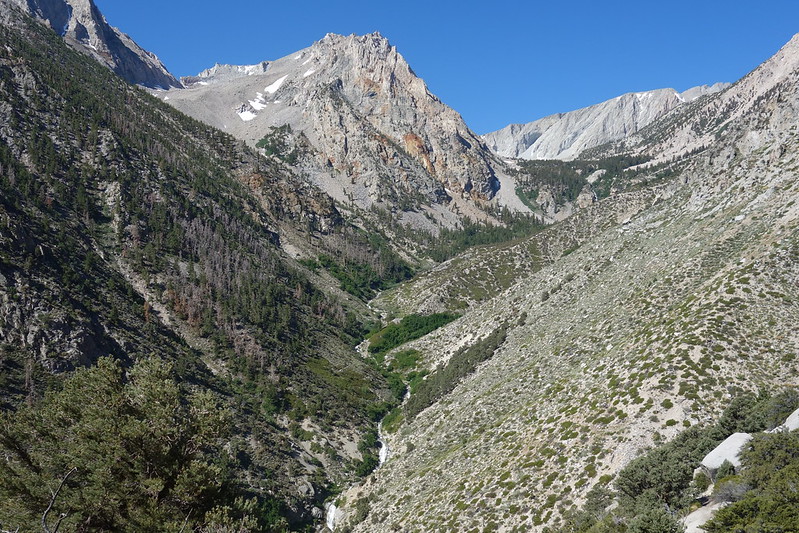 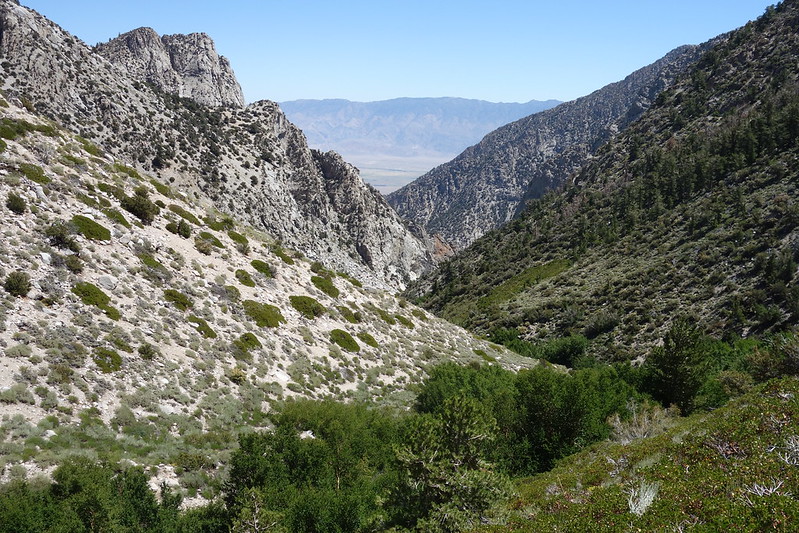 From the oasis, our trail switchbacks up a few hundred feet to the wonderfully-named Mahogany Flat—a set of old camps now overcome by avalanche debris—then climbs steeply through thin old forest and new unstable rock into the miles of talus that lead toward Shepherd Pass. 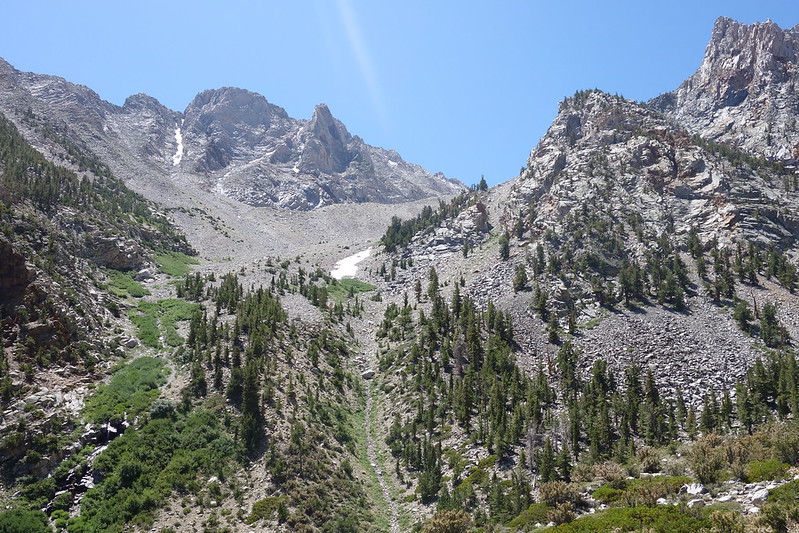 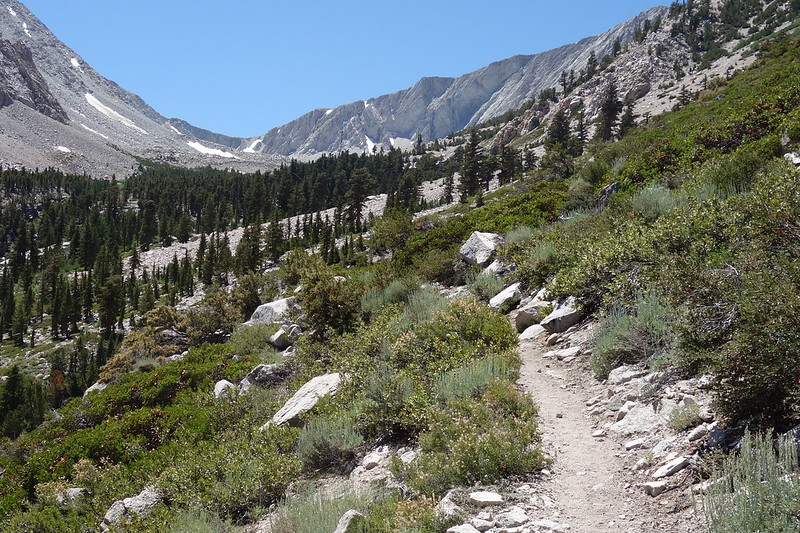 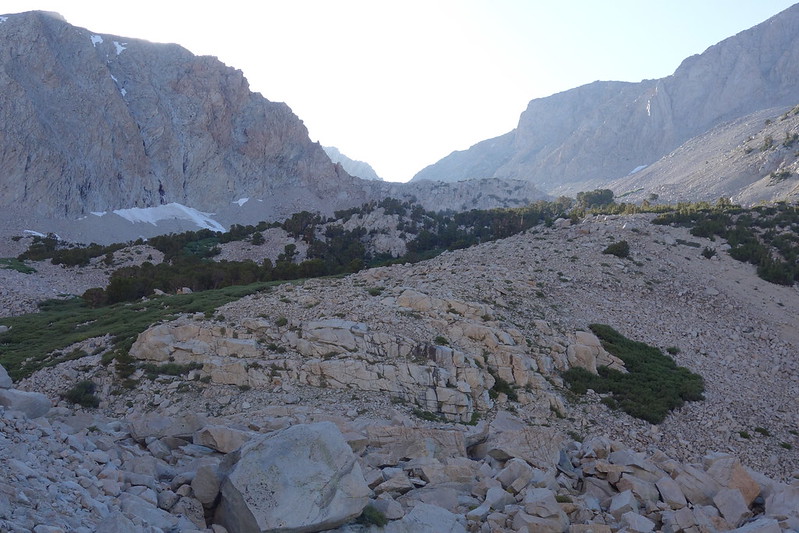 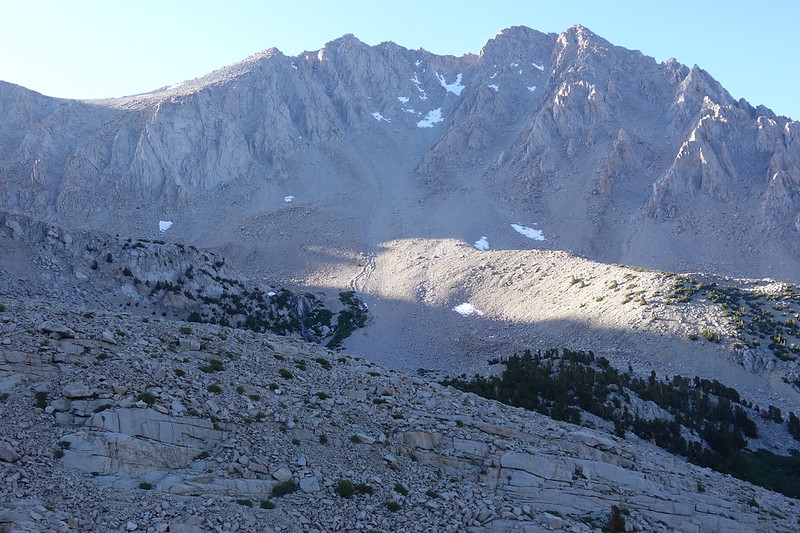 It’s not clear if there’ll be anywhere flat enough to put a tent amid the boulders, so we stop for the night near a trickling snowmelt stream a few miles short of the pass. There are bird here too, but few enough to count—as we’re cooking dinner, I hear seven different songs—and a resident pika who’s not happy about sharing camp. 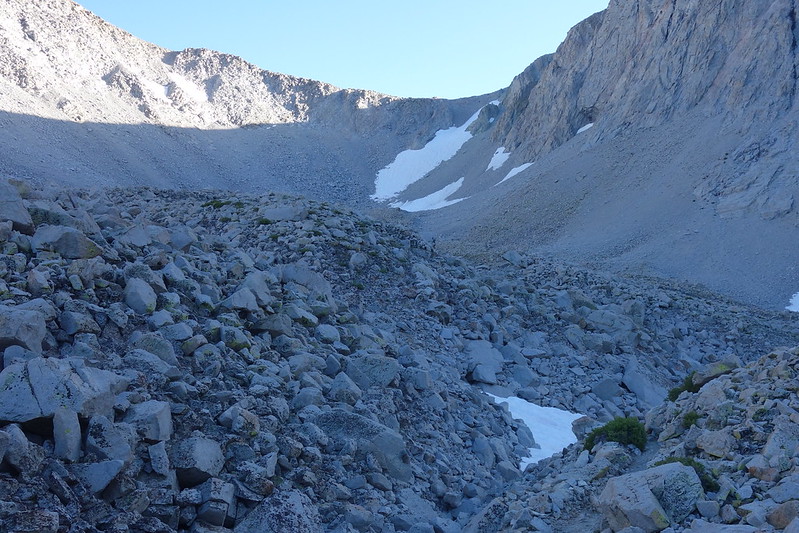 The Sierra had a lot of snow this winter, and it’s still just spring up here: new flowers blooming, sleepy marmots trundling over snow. We watch it all as the sunset sets. An hour later, the stars emerge from the long desert light, and they feel new too.

On a lot of my trips lately—Glacier Peak this year, the Sierra last, the Olympics before that—the itineraries have been sort of ambitious, and I spent a lot of time just making miles. I love that, that feeling of seeing so much in a day. But this time we wanted something different: time enough to wander, or to break in the middle of the day, to spend an hour at lunch just because we like the view.

I was worried I’d feel restless, but there’s something magisterial about getting in before dark, or having a whole evening to watch the day turn to dark and the sun turn to moon. I think of something from Muir’s First Summer in the Sierra: “Life seems neither long nor short, and we take no more heed to save time or make haste than do the trees and stars.” 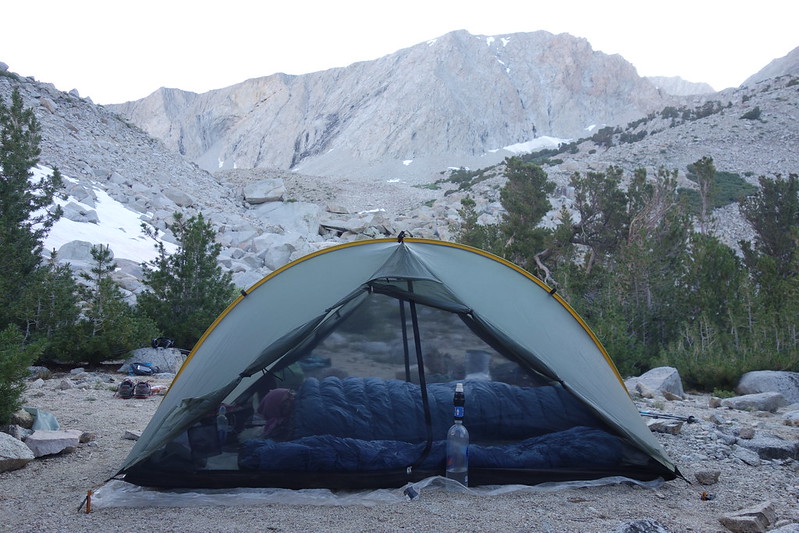 The miles of talus take less time than we thought, and by mid-morning we’re at the bottom of the steep rock and snow slope that leads to Shepherd Pass. 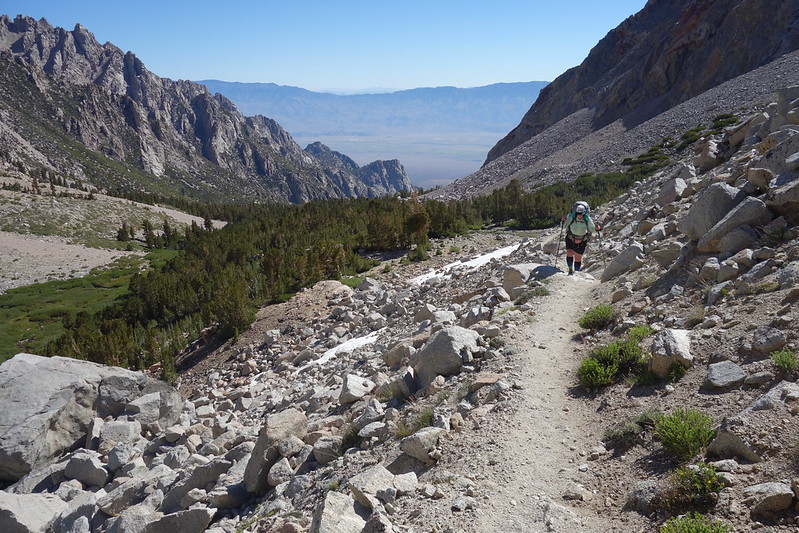 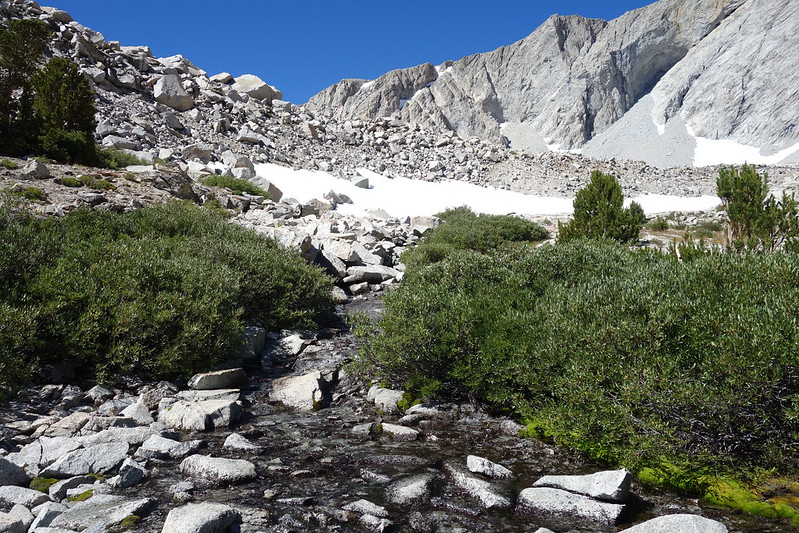 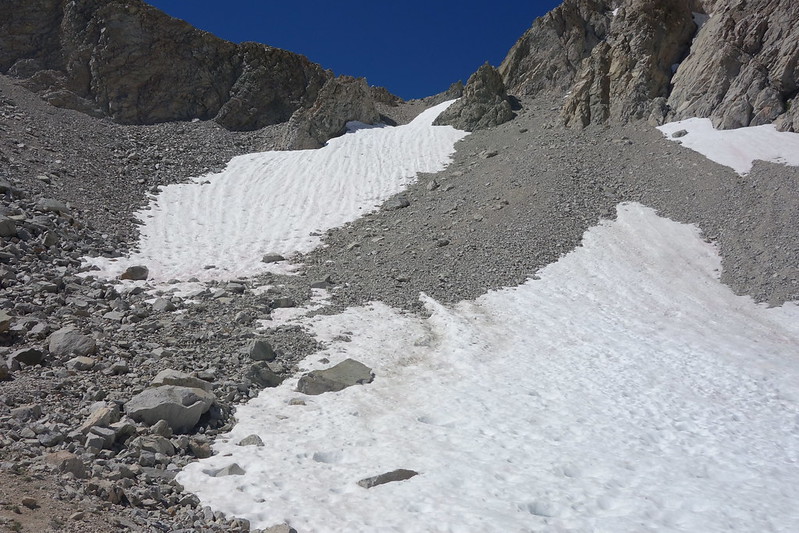 The pass is infamous, in that it’s perhaps the most difficult regularly-maintained pass over the main Sierra crest: the way so far has been fine, but the last half mile gains just short of 1000’, the last bit of it on permanent steep snow and ice. 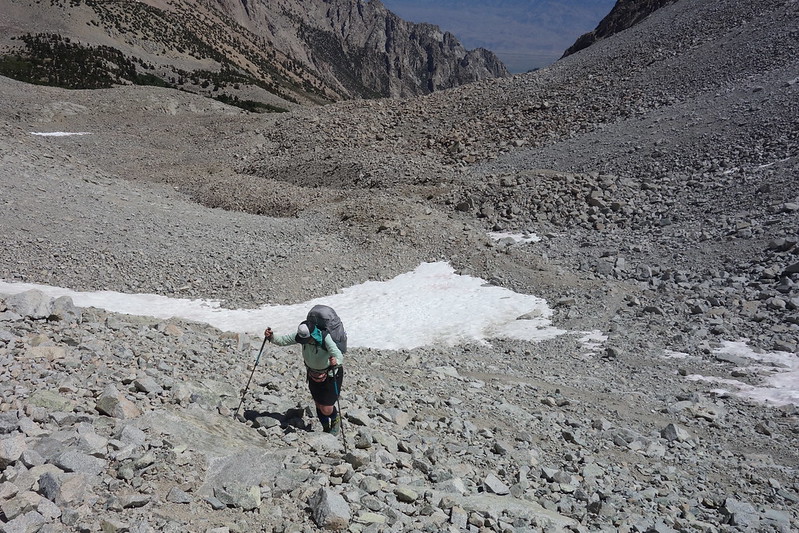 The trail fades and braids through unstable glacial dust for the first five or six-hundred feet of gain, but coalesces into a series of tight switchbacks just before the snow, then crests a small rock outcrop before dropping onto a landing of slick ice. 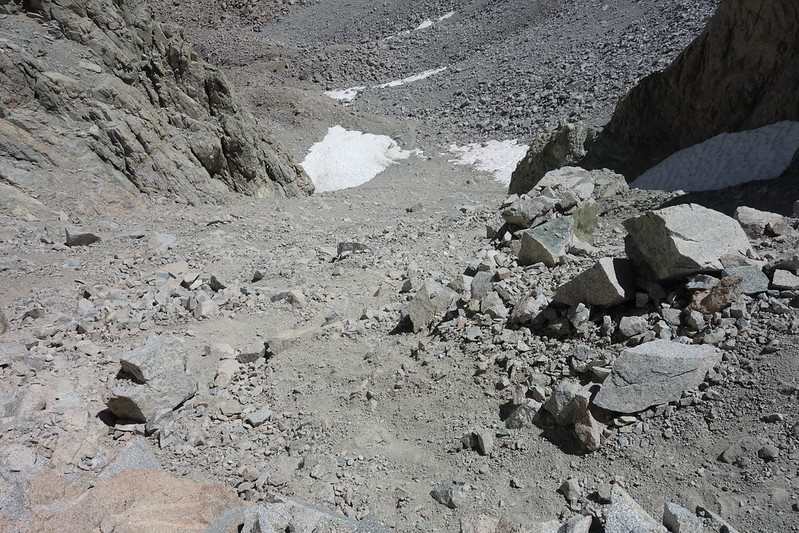 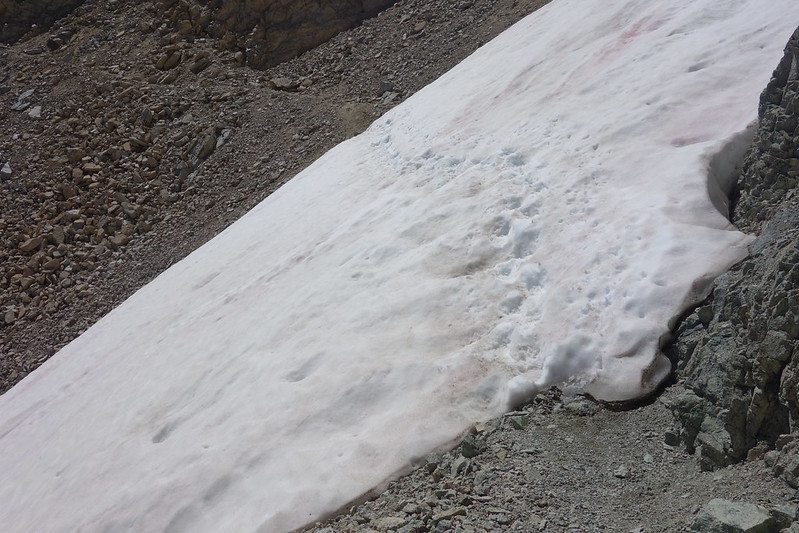 We stop for a while and talk things through. The crossing this year’s only about 100’ long, but it crosses a steep shoot where, if you fell, you would die. I’ve done a bit of this over the years—more out of overconfidence than bravery—but this is Krista’s first time on snow this steep, and I’m nervous for her.

She, however, does not seem nervous at all. We strap on our foot traction and start out onto the ice. I’m clearly more scared than she is, narrating some stuff about technique. She’s kind, but clearly doesn’t need all my bullshit.

On the other side, she smiles. “That was fun!” Then a long pause. I suspect I look incredulous. She’s still smiling. “We should climb some mountains this winter!” 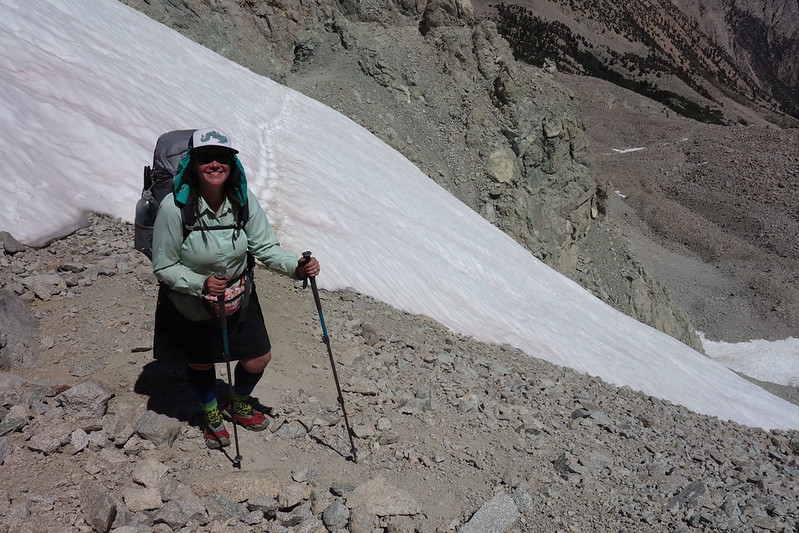 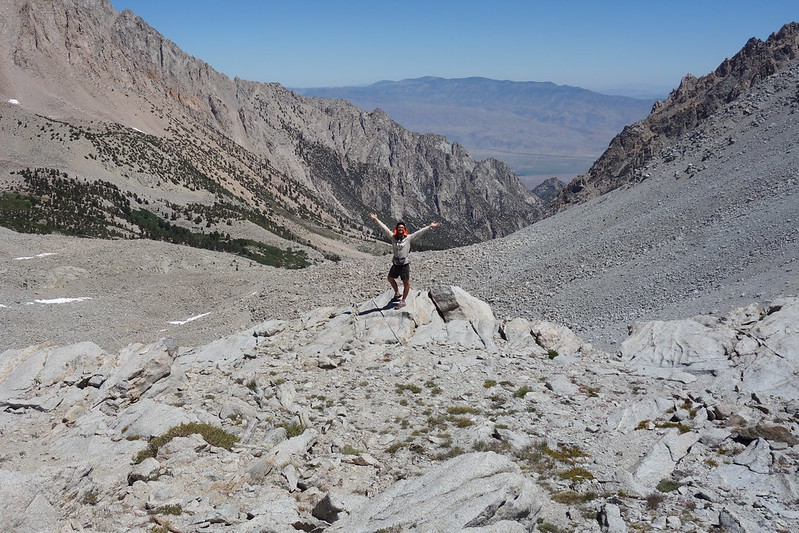 We stop for an early lunch at unnamed lake just on the far side of the pass, then continue on, off trail now, into the Tyndall Plateau—a broad expanse of rocks and flowers and little snowmelt streams between Polychrome Peak and Mt. Tyndall. 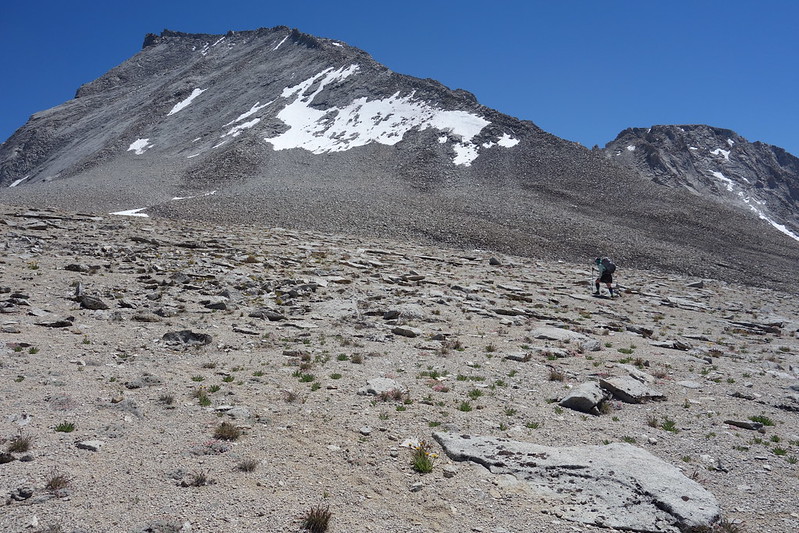 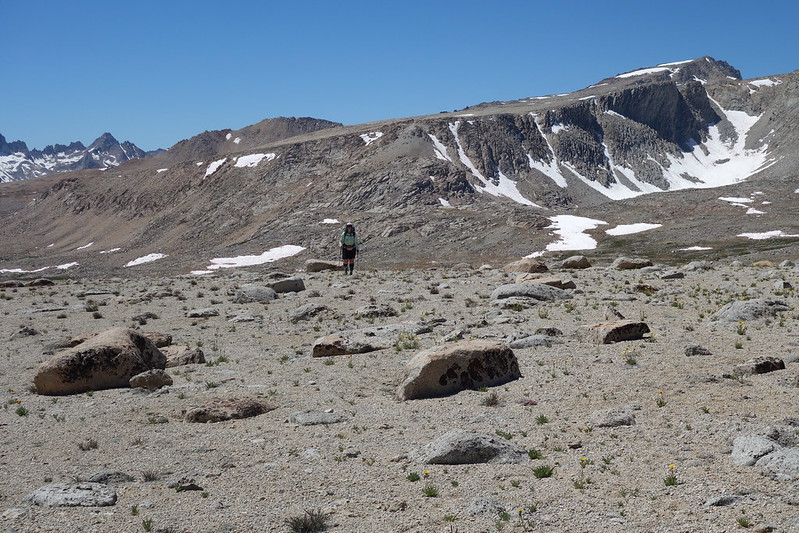 We set up camp behind a boulder at what’s clearly a well-used climber’s bivy, then set out to wander: first east, to the Williamson Bowl and its dozen unnamed lakes—like the Enchantments, but the size of a planet—then north to scramble along the Sierra Crest, up Polychrome Peak. From the top, you can see the Owen’s Valley and Shepherd Pass’ sheer snow, every step we’ve taken for the last few days. 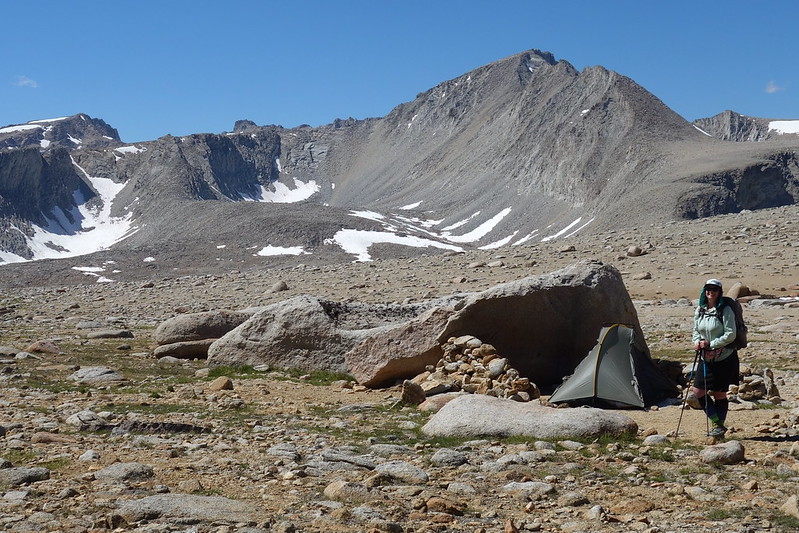 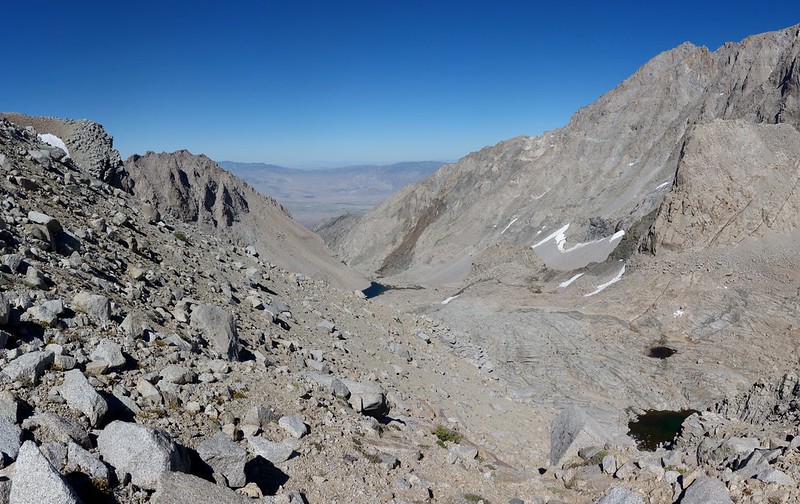 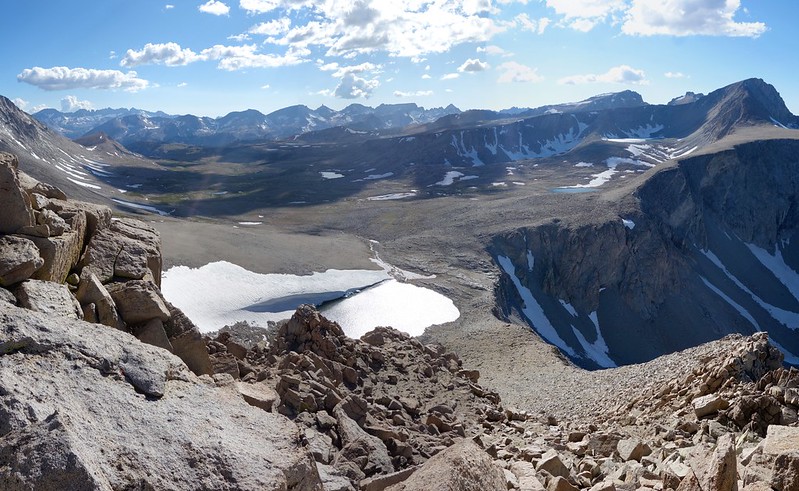 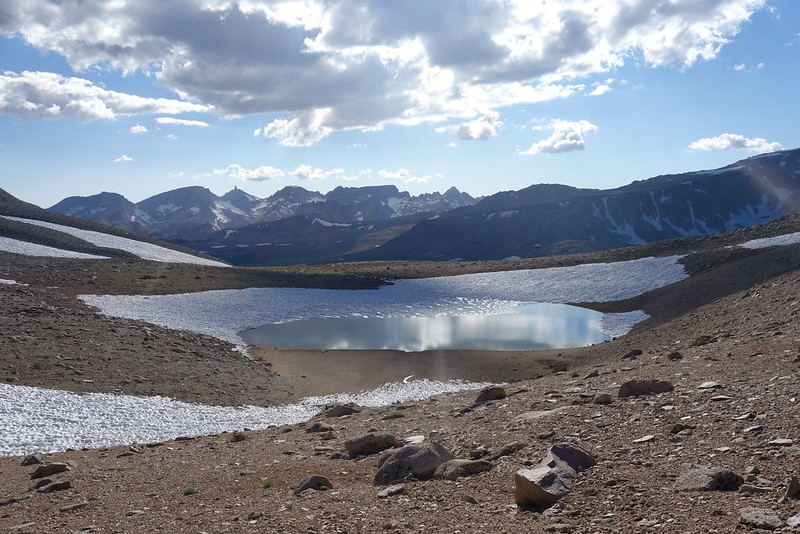 The sun sets on a spotlight moon so bright that we still have shadows hours after last light. We sit out on the still-warm rocks to the sound of trickling streams in the twinkling light. 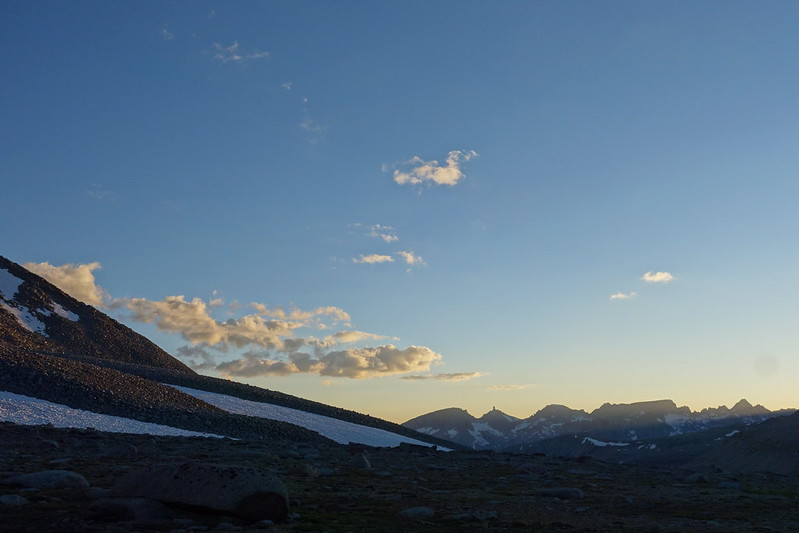 2 thoughts on “Up High in the South Sierra, 1: To the Crest”