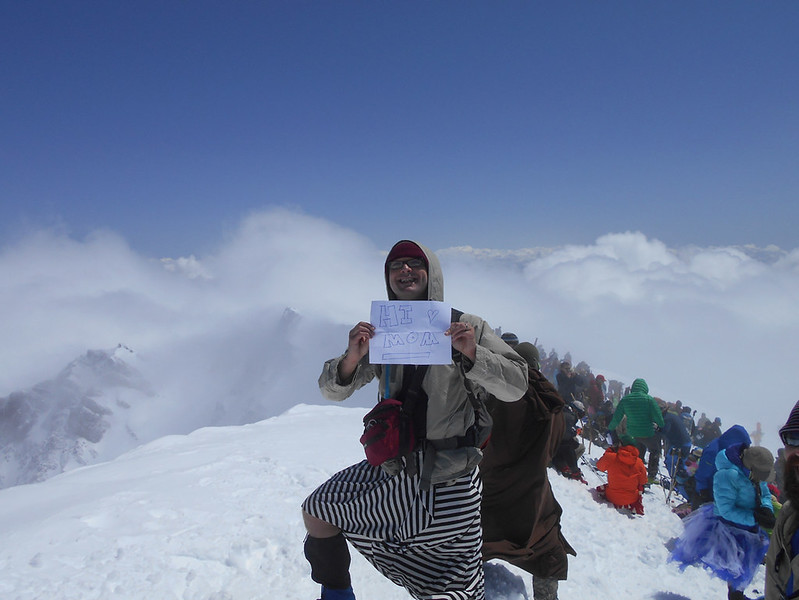 Every year hundreds of hikers summit Mount St. Helens on Mother’s Day, wearing dresses to honor the women in their lives. The tradition goes back to Kathy Phibbs, a vocal critic of what she took to be overly masculine elements in mountaineering culture, who climbed St. Helens in 1987 wearing a tutu.

I’ve been wanting to climb St. Helens, and people said this was a good day to do it, as the 6 mile, ~5700 foot trudge up the winter Worm Flows route can apparently be a little monotonous, and a moving fashion show is a welcome distraction. (There’s a shorter route in the summer up Monitor Ridge, but the ash and loose rock exposed by the lack of snow apparently more than make up for the slightly lower numbers.)

We left Portland at around 4:30 Mother’s Day “morning.” My buddy Trev was not stoked. 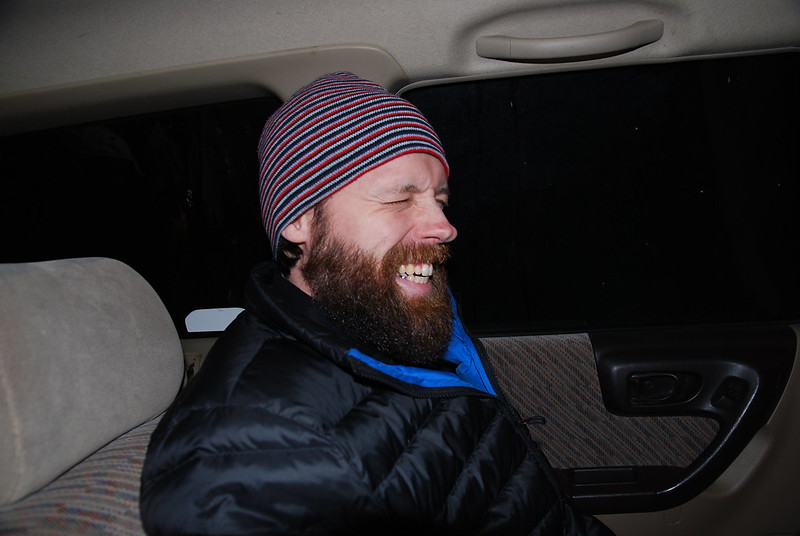 Permits are sort of a headache at St. Helens, but we’d already reserved ours, and stopped at a small resort in Cougar on the way there to pick them up. I hadn’t slept much the night before, and was dragging all morning. I’m not sure exactly when we made it to the trailhead, but when we got there, the 130 car lot was already well over capacity, and we parked up the road a bit. Apparently around 800 people were registered to climb, and it definitely felt crowded, especially for the first few miles through the woods.

But we weren’t there for solitude. We were there for fashion. 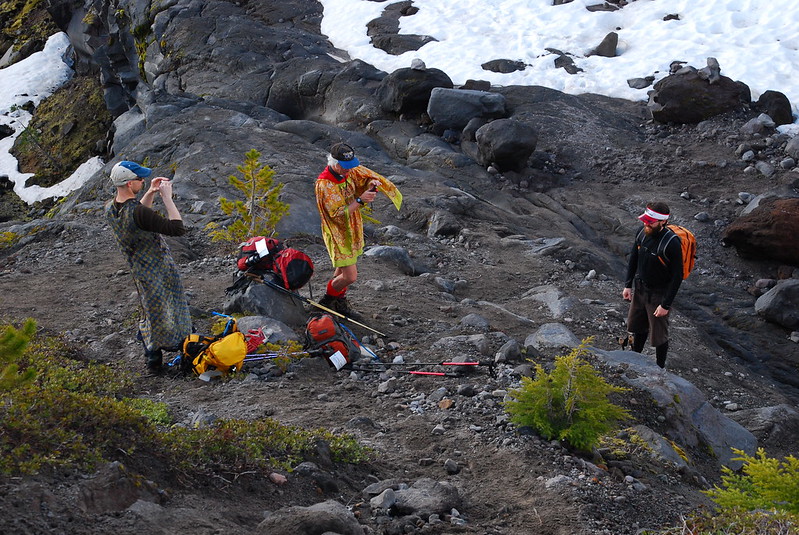 Primping in one of the first clearings.

After a few miles and just a tiny bit of elevation gain, the trail breaks out of the woods, and you immediately get great views down into the Cispus River valley and up toward St. Helens. 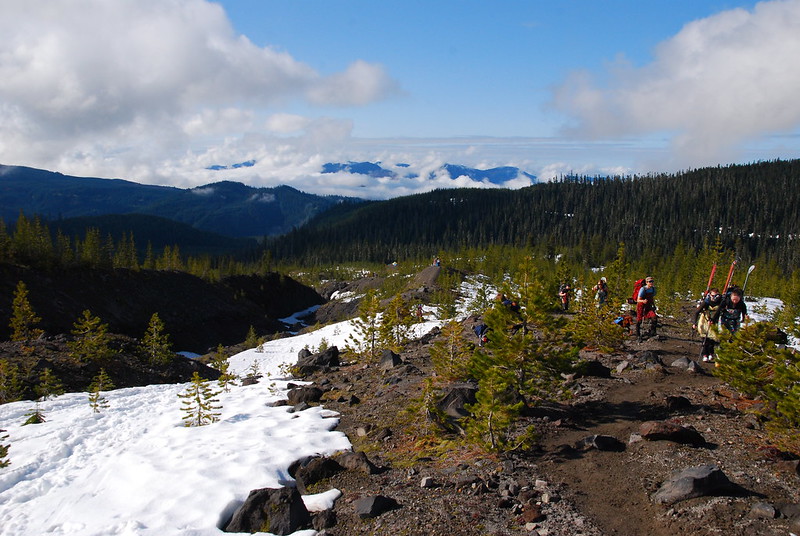 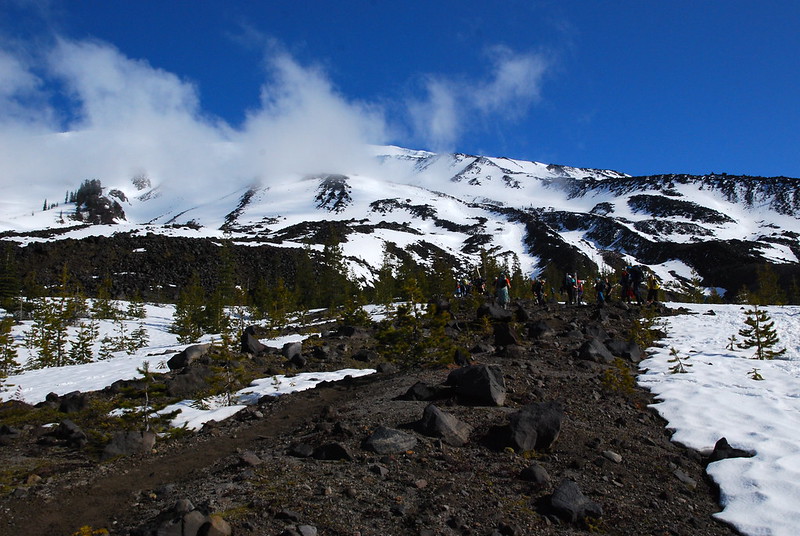 Snow became constant just after we entered the limited access zone at 4800 feet, though, going through the Worm Flows, there were also sections of exposed (and sharp!) volcanic rock. 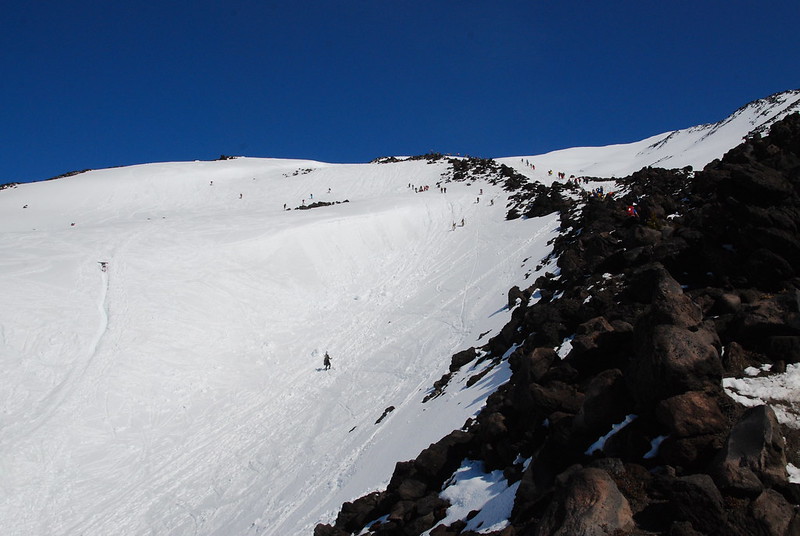 After leaving the Worm Flows, the trail stayed on snow and ice until the summit. I put on my Fancy Footwear. People had also brought snow shoes, but the snow was pretty well packed, and I only saw a couple people actually wearing them. There were also a bunch of people ascending on skis with some sort of gripping skin on the bottom. I have no idea how they pulled that off: I have trouble just staying upright on flat ground. 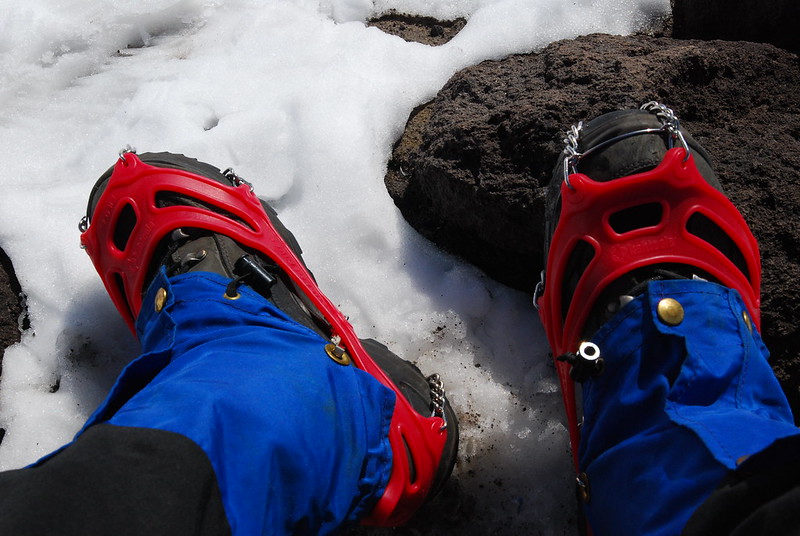 The trail gains around 3300 feet in the last two miles, which makes the grade around 30%. That’s not totally ridiculous – there are streets in San Francisco that steep – but it was pretty rough going all the same. I took a lot of “picture breaks.” 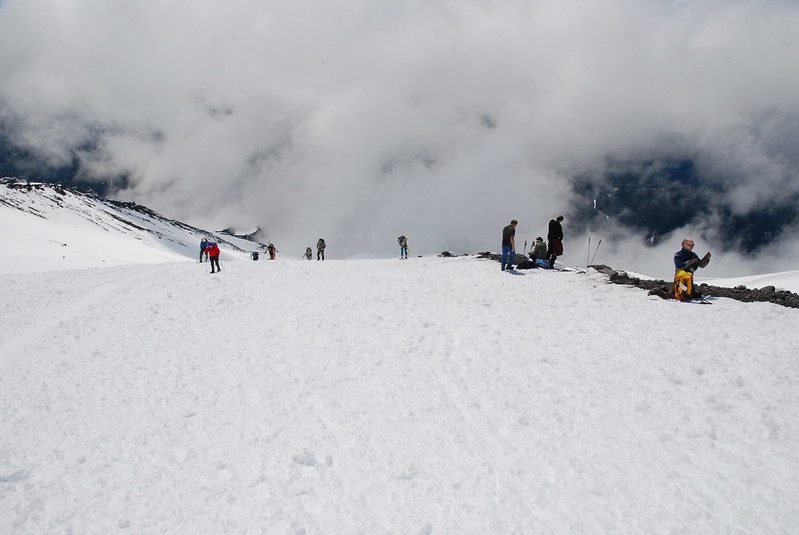 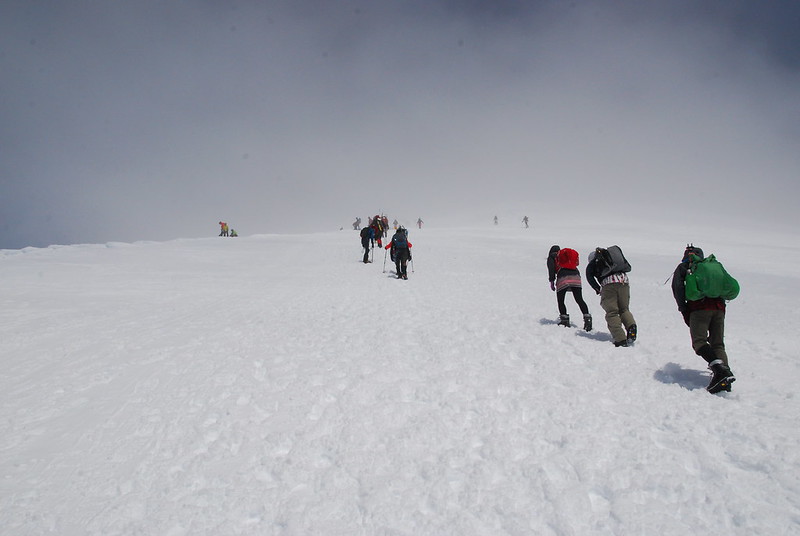 We were racing clouds for most of the way, playing peek-a-boo (peak-a-boo?) with the surrounding hills. Here’s Adams, popping out for a moment to say hello. 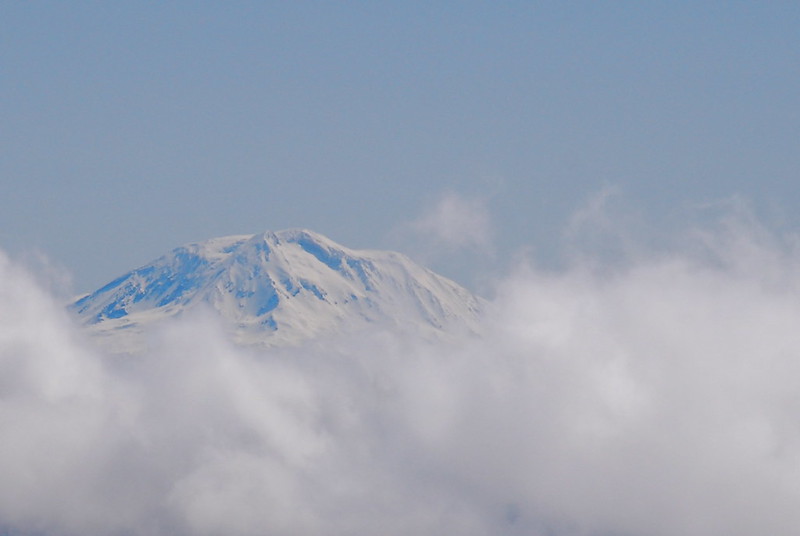 The hike up wasn’t exactly monotonous, but I was happy to pass the final false summit and actually get to the top. It was surreal up there – like someone had transported a medium-sized Mardi Gras party to the top of a mountain, and no one had quite noticed yet. 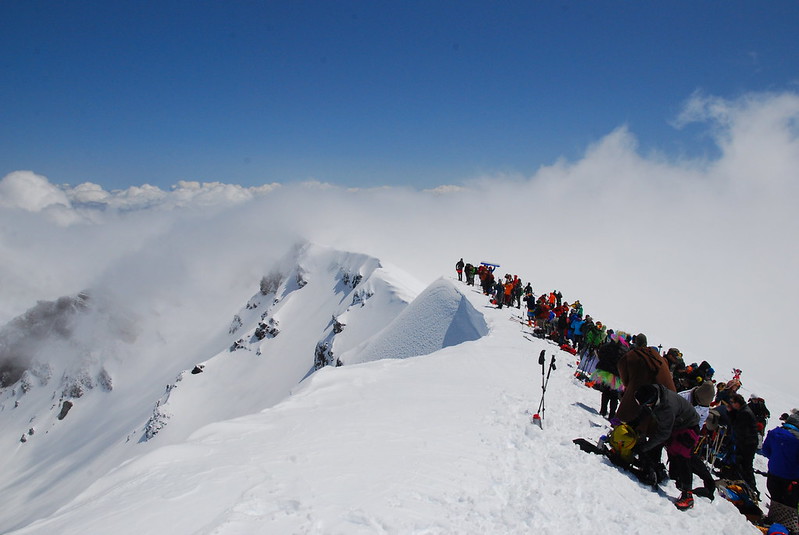 Before lunch, I did the usual running around taking way too many pictures. Here’s a panorama looking down from the top into the blast zone at the lava dome, Spirit Lake, and Rainier just peeking out over the clouds.

A couple more for good measure: 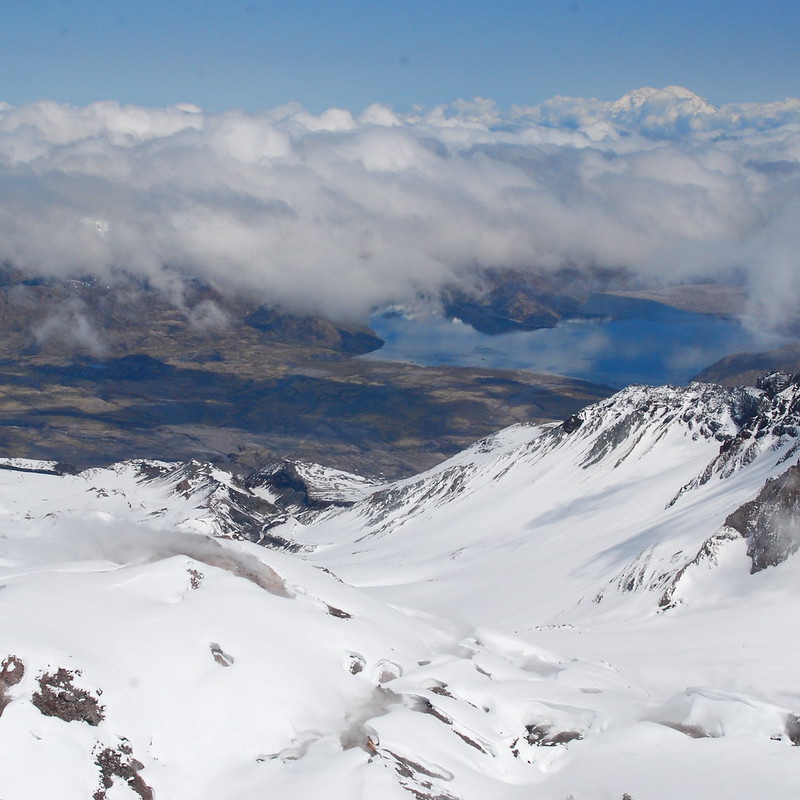 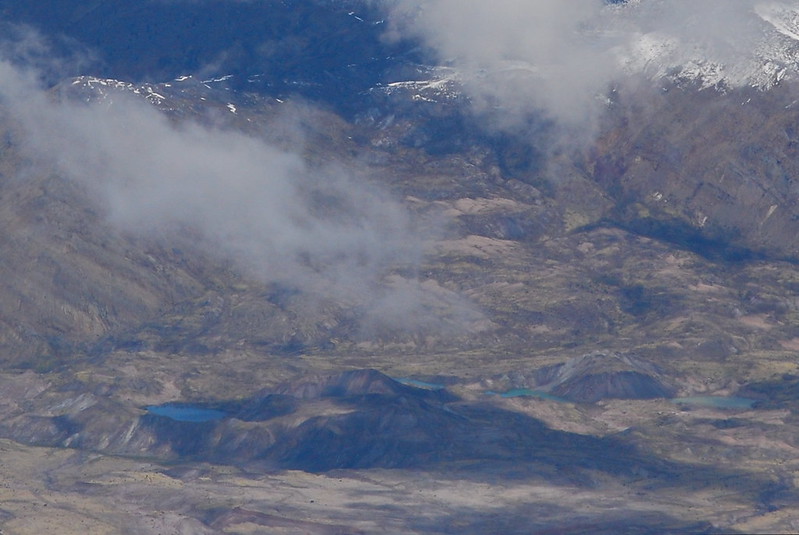 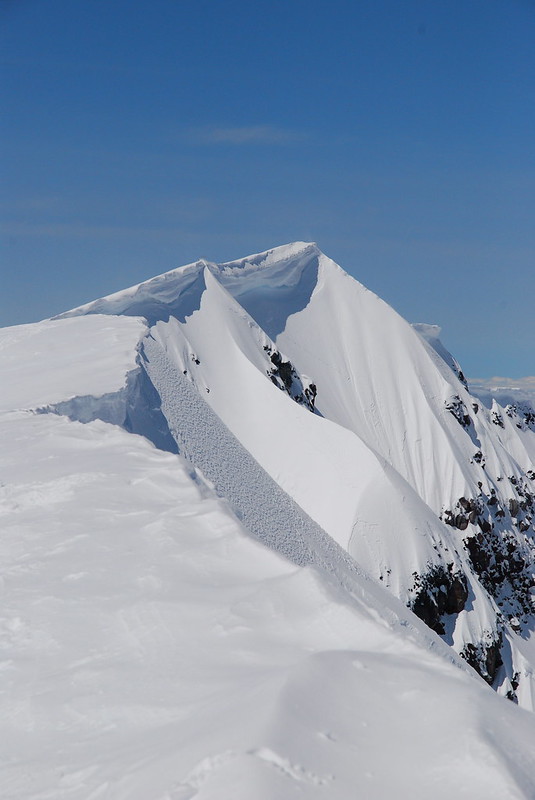 My buddy had lugged up a few surprise beers, which we happily drank with the traditional sausage, cheese, and tortilla hiking lunch. 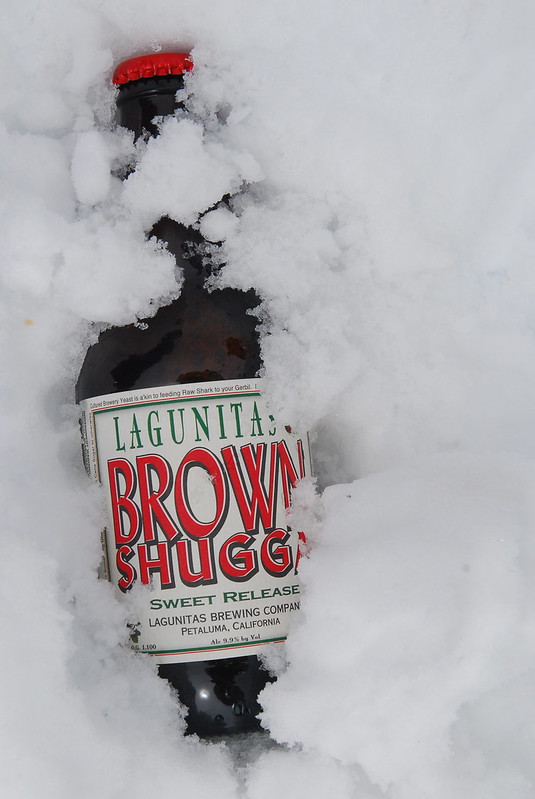 I could have stayed up for hours filling the memory card on my camera, but the clouds eventually caught up. 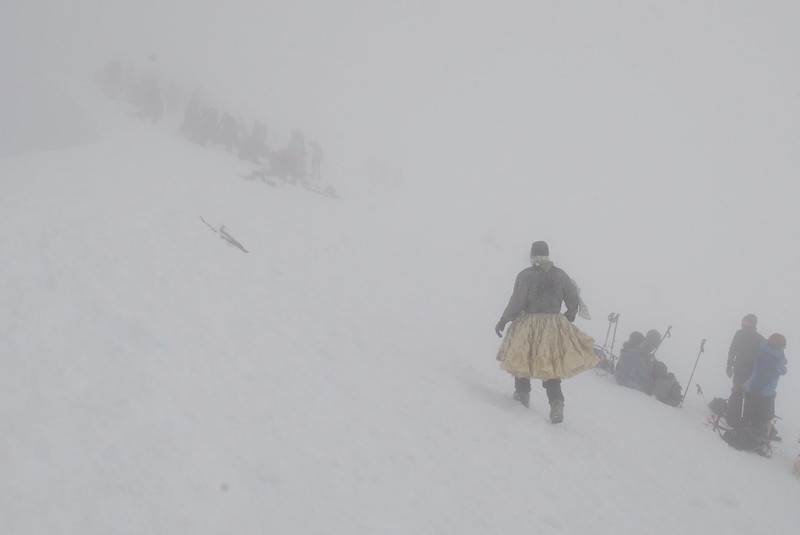 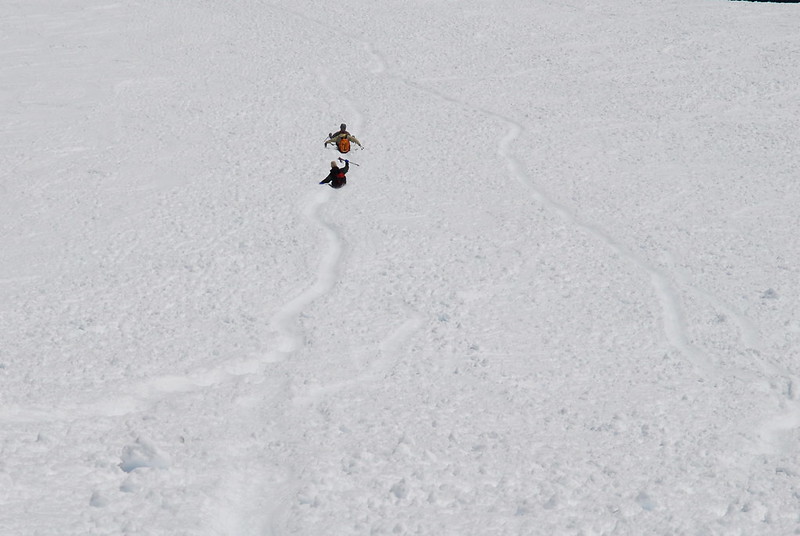 I was a little worried about glissading, given the poor visibility, but things cleared up after descending a few hundred feet, and we sledded down at least 3000 feet very quickly. By then the snow was loose enough that we could self-arrest just by putting our feet down, and the whole thing felt like being (more of) a kid again, on the best sledding hill ever. 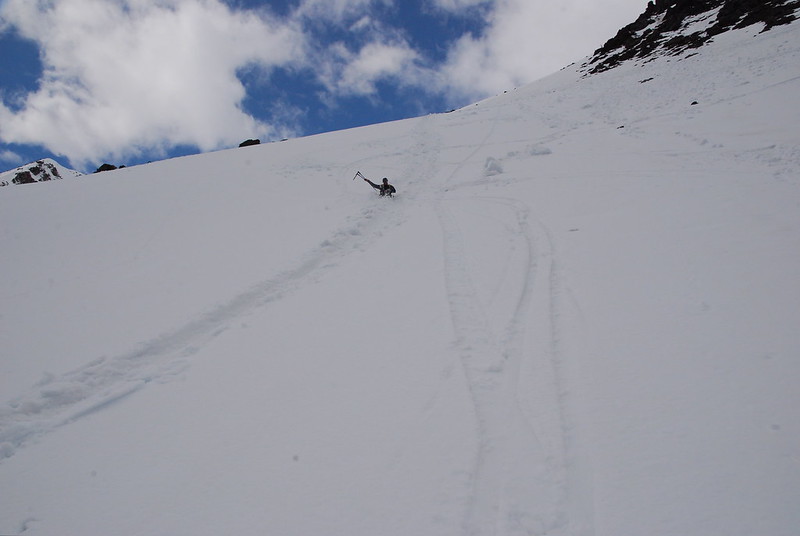 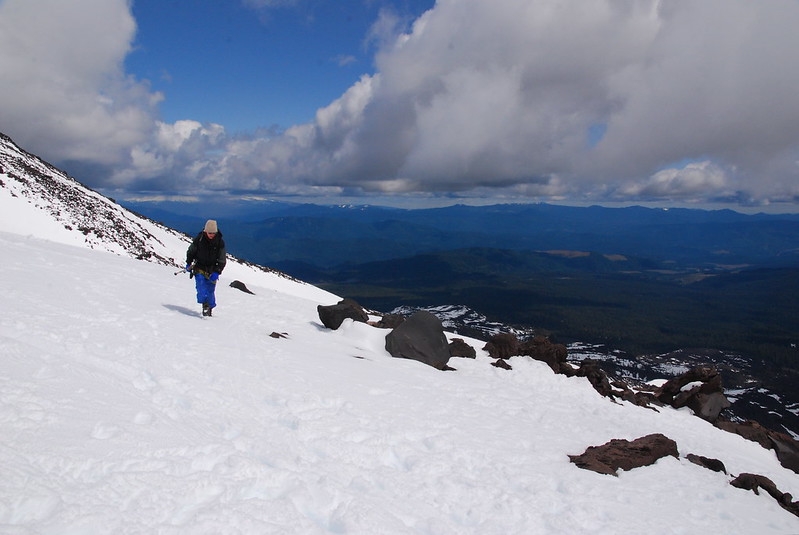 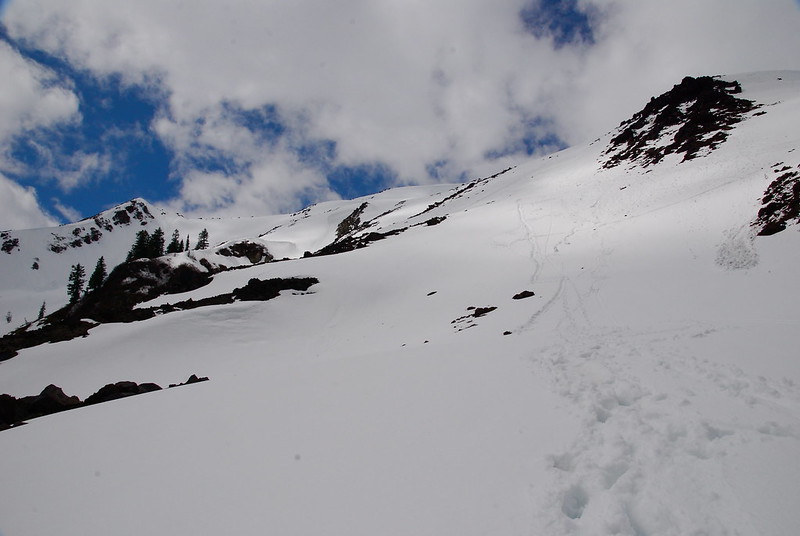 The view back up at our tracks.

Looking west at a few people descending down Monitor Ridge. 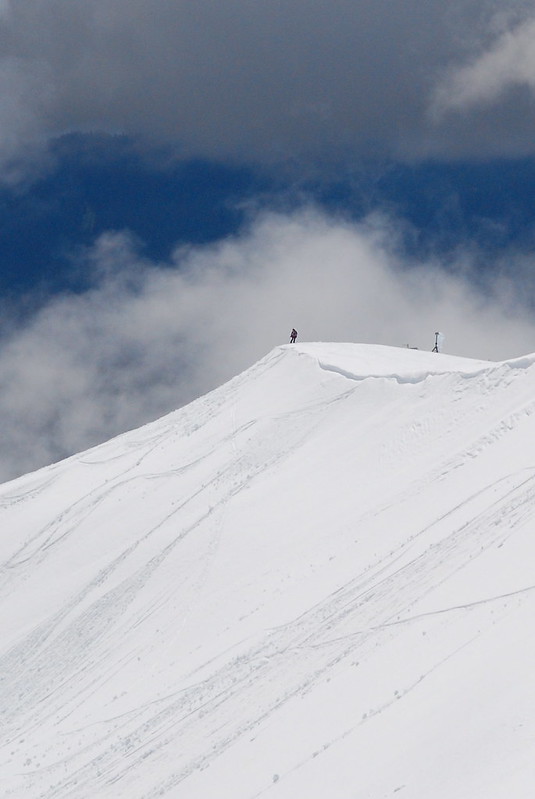 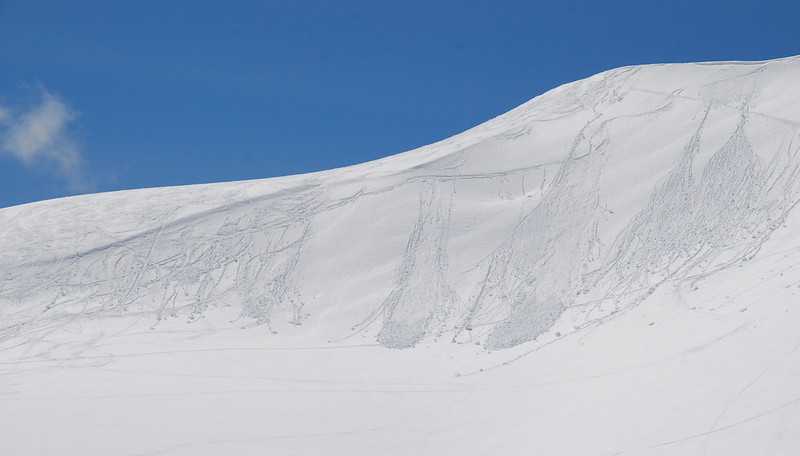 And looking south. Mount Hood must be back there hiding somewhere.

As we hit the end of the snow, a few people came down on parachutes (!?). Apparently ski parachuting is a thing? 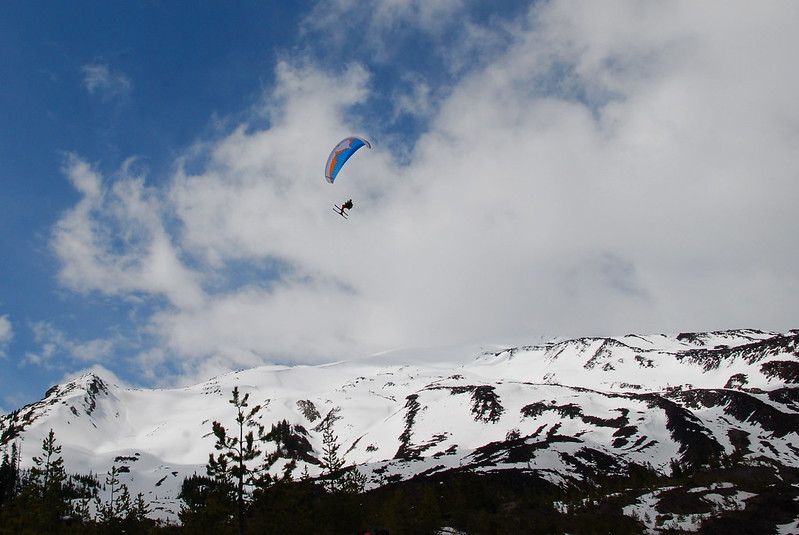 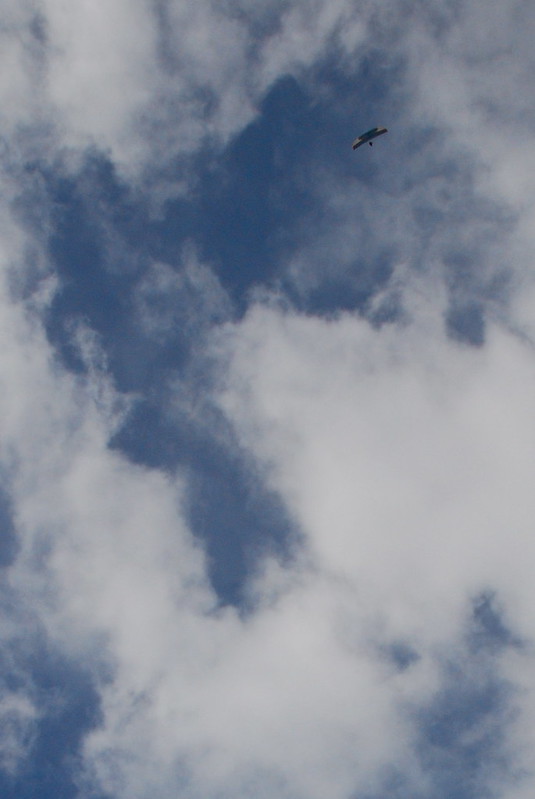 From there, it was just a quick couple mile walk through the gently sloped forest trail back to the car. 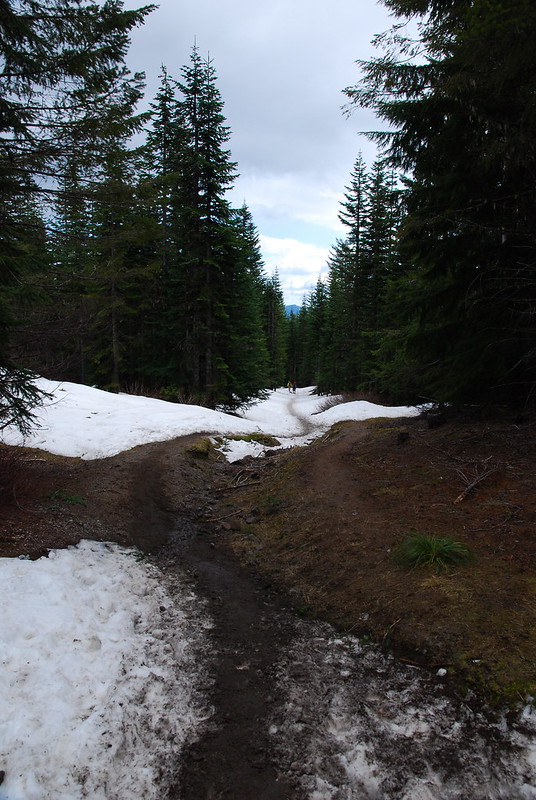 One thought on “R Solo: St. Helens Summit (in a Skirt)”