Last month – actually, exactly a month ago today – my dad and I took a quick trip to Headlight Basin and Lake Ingalls in the Alpine Lakes Wilderness to see the larches. Oh my god the area is beautiful. I’d never been to Alpine Lakes before. Now I’m planning a good part of next summer around going back again (and again and again).

It’s a long way to the Alpine Lakes – like, a five or six hour drive. We left Portland around five, drove east to Biggs, north to Ellensburg, on the truly awful North Fork Teanaway Road, and finally got to the Esmeralda Trailhead in the late morning. There were small passenger cars there, and my dad did fine in his Forester, but I probably would have had a few dozen panic attacks.

The trail follows an old mining road along the Teanaway River (creek? brook? steam? trickle?) for a little under a half mile before turning right (east-ish) out of the valley. 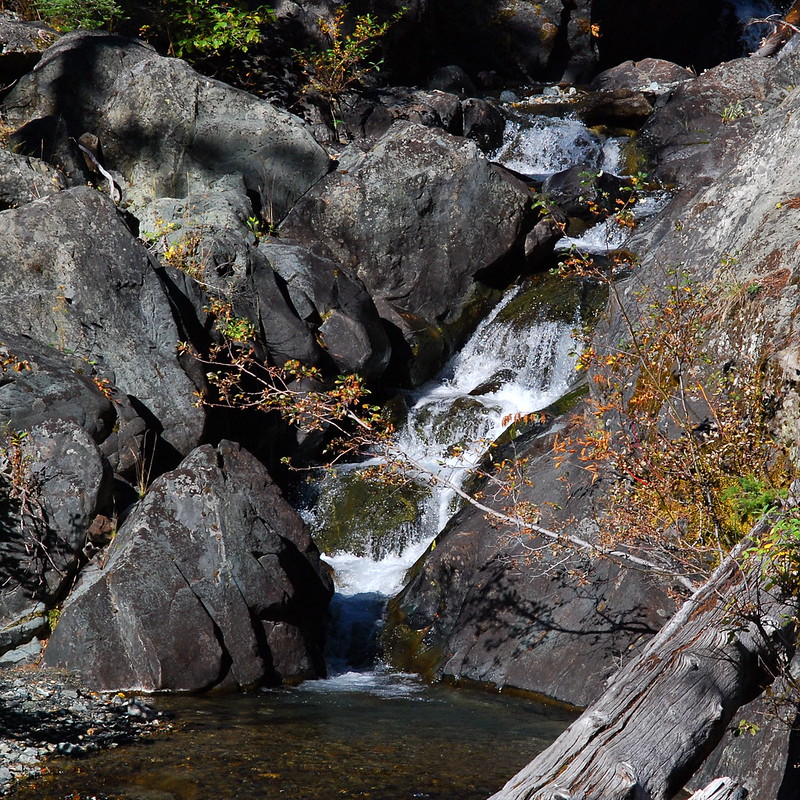 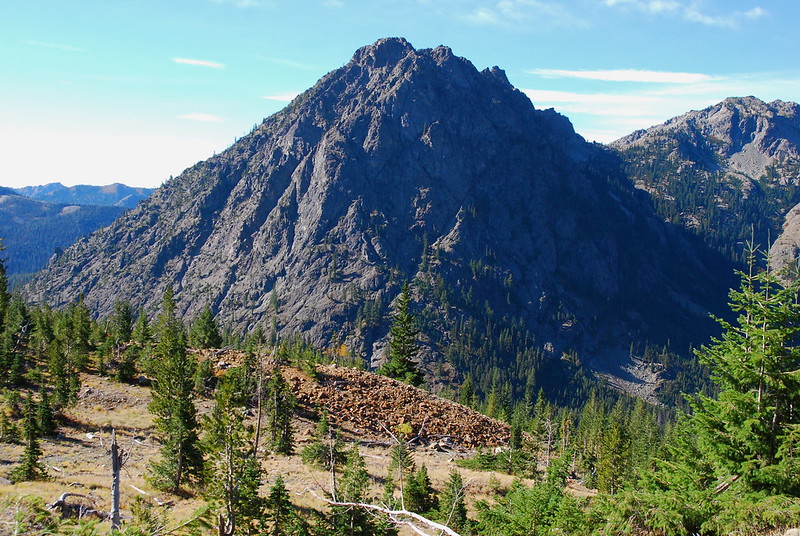 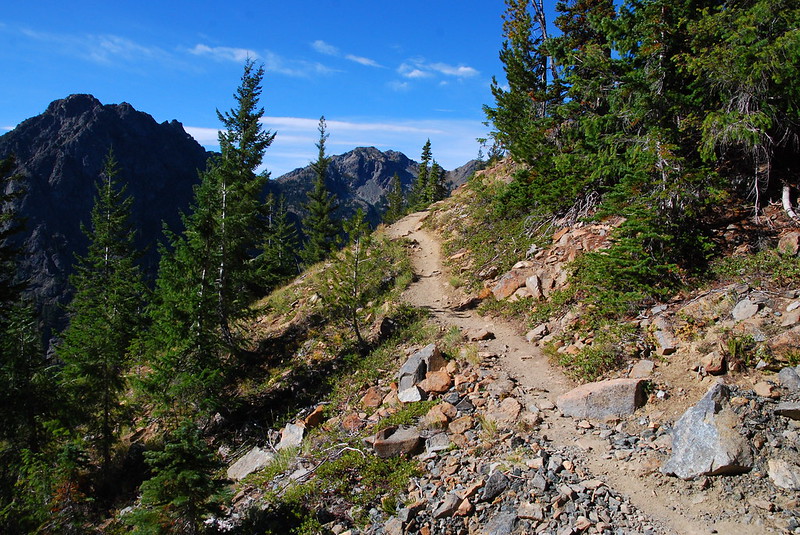 After a couple miles, we passed a junction with the trail to Longs Pass, then started ascending a little more steeply toward Ingalls Pass. 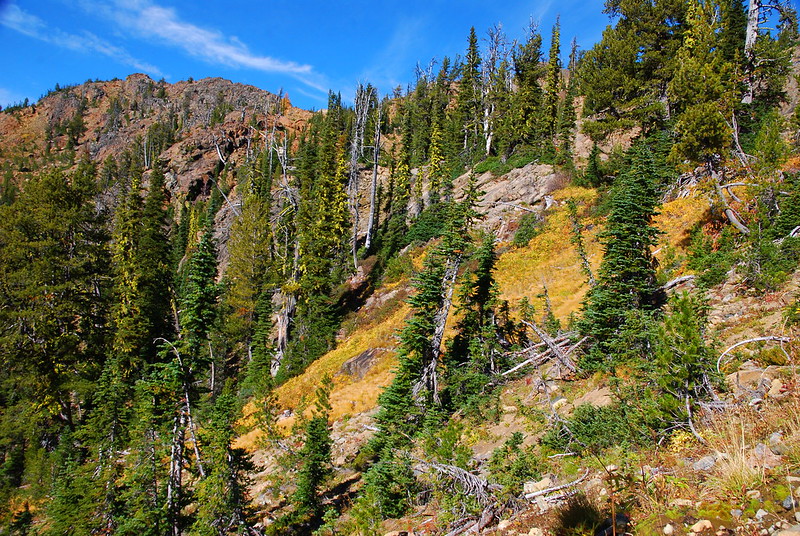 And then, as we entered Headlight Basin… larches! So many larches! I’d never seen a larch before, at least not a golden one. I’m going to shut up for a little and let you look. 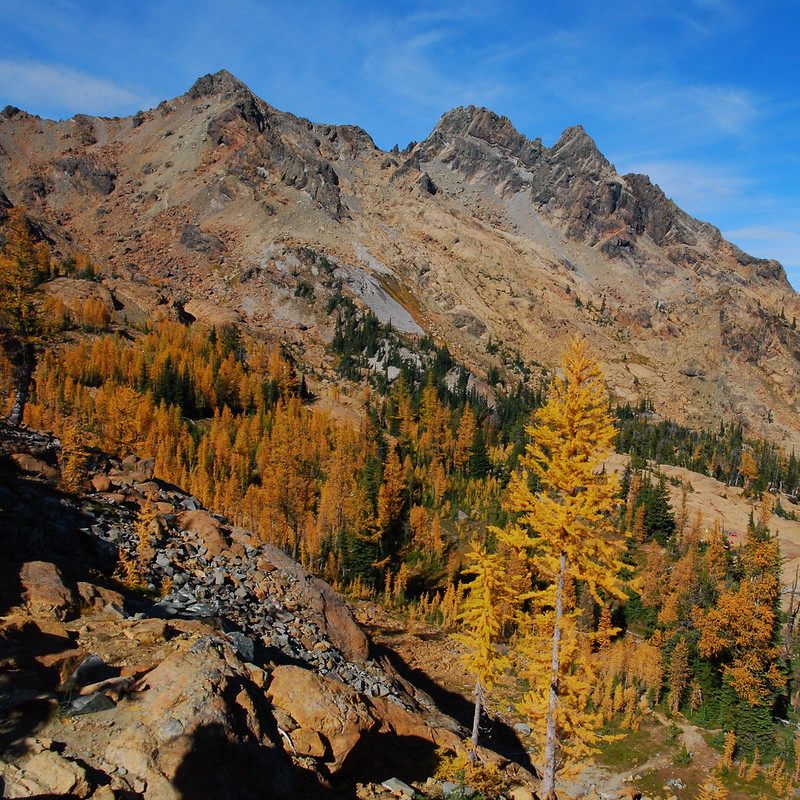 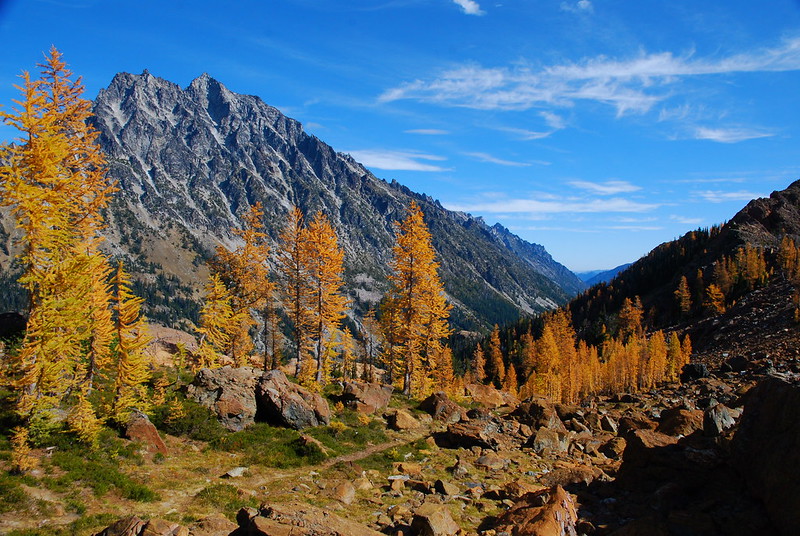 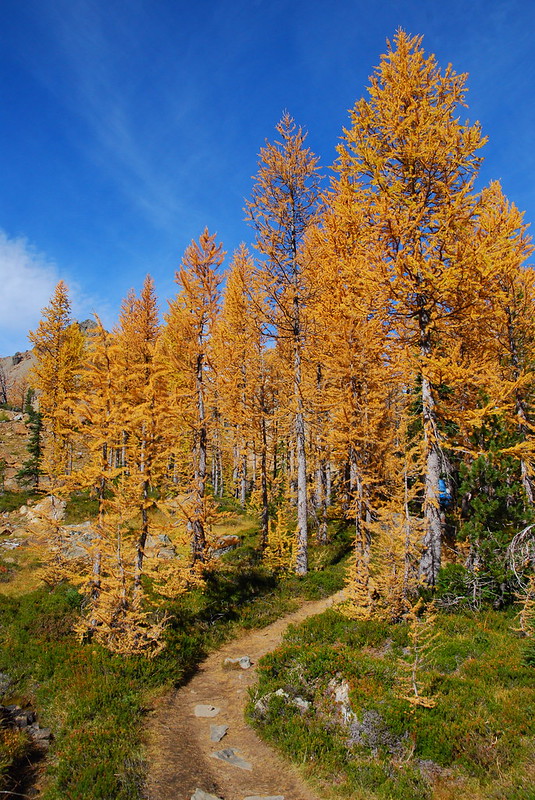 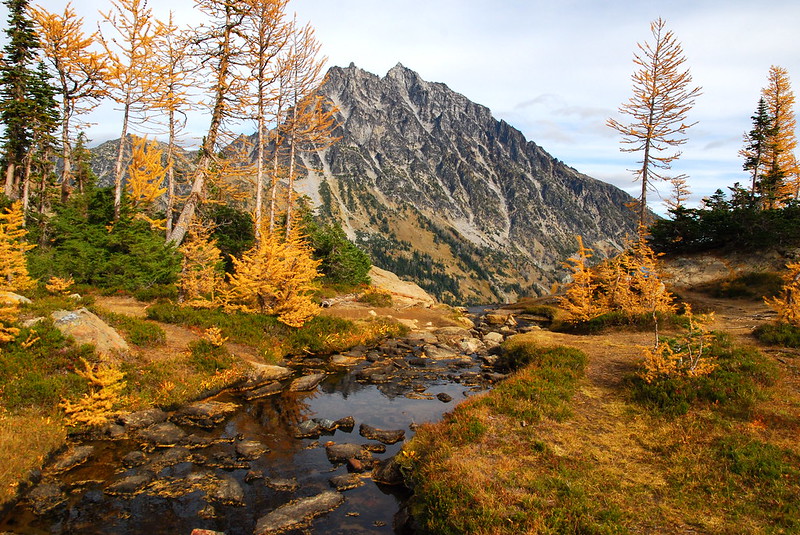 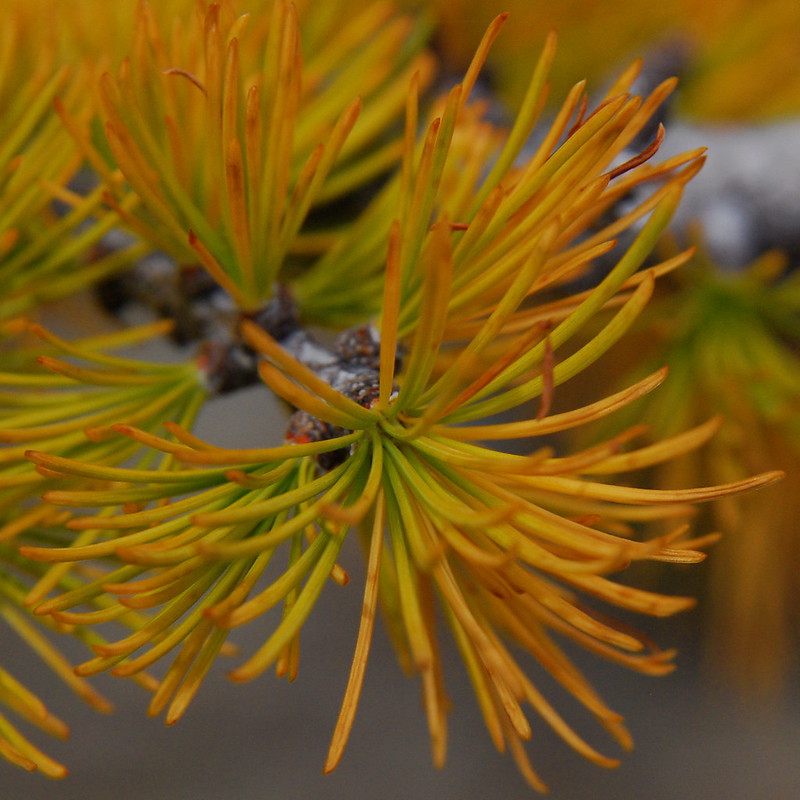 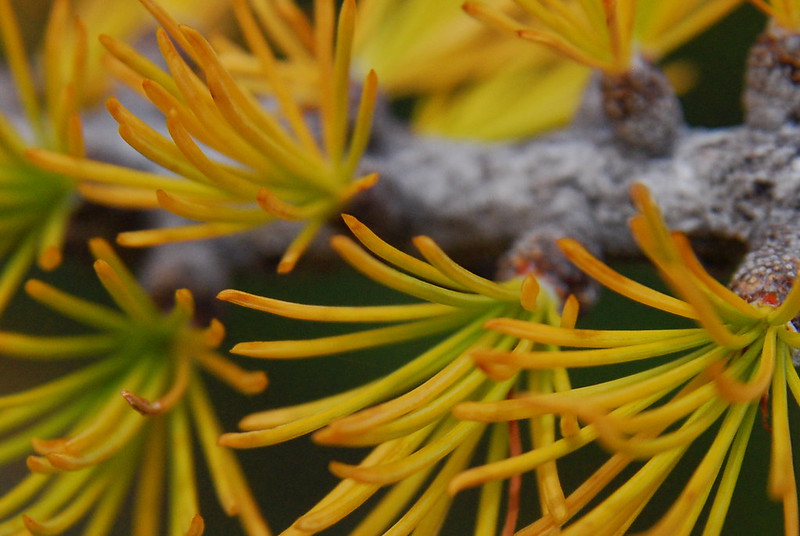 We set up camp near Headlight Creek, ate a quick lunch, then headed off for a dayhike to Ingalls Lake. Notice our tent? 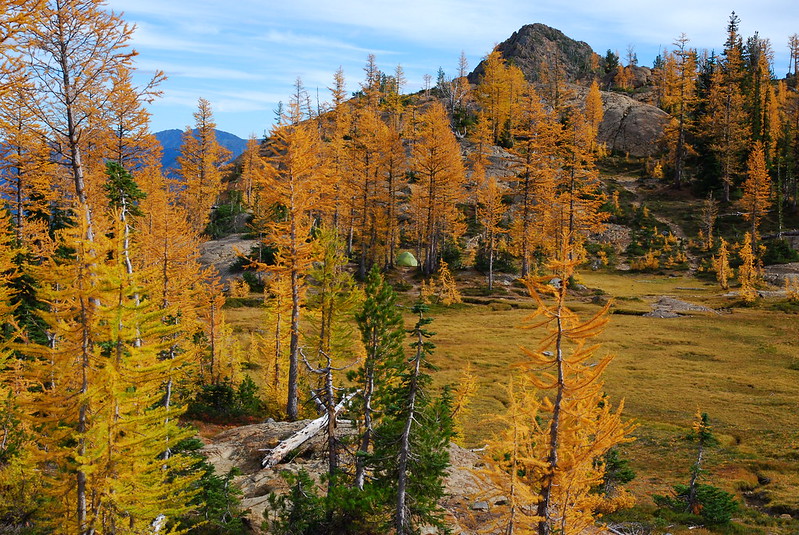 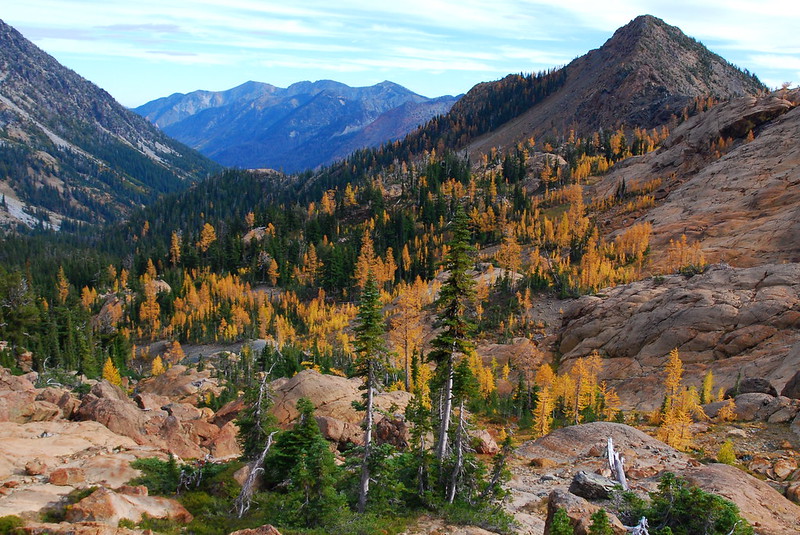 Maybe a half mile in, we ran into a few friendly goats having an afternoon snack. They were so jaunty! I’m used to the cantankerous, anti-social kind. These guys just wanted to be friends… and to work it. 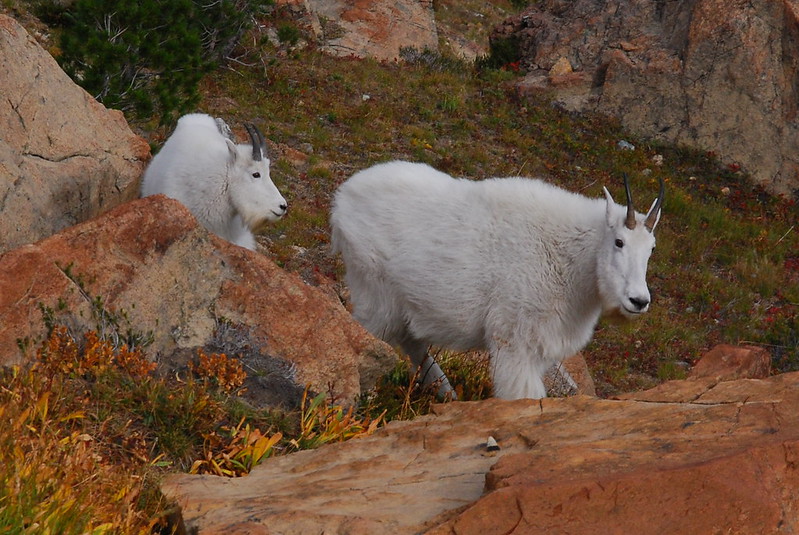 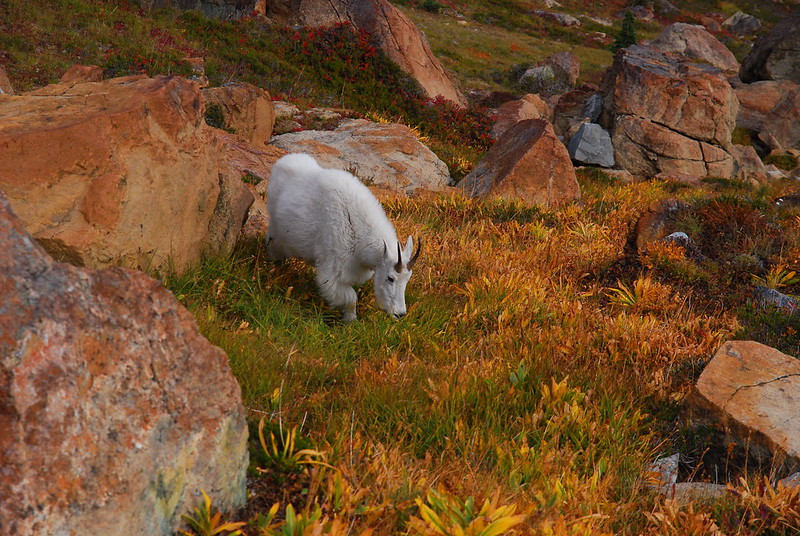 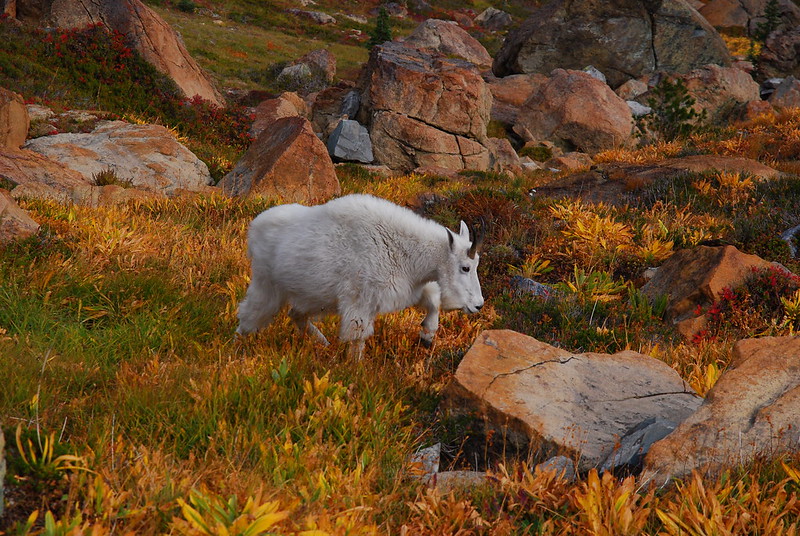 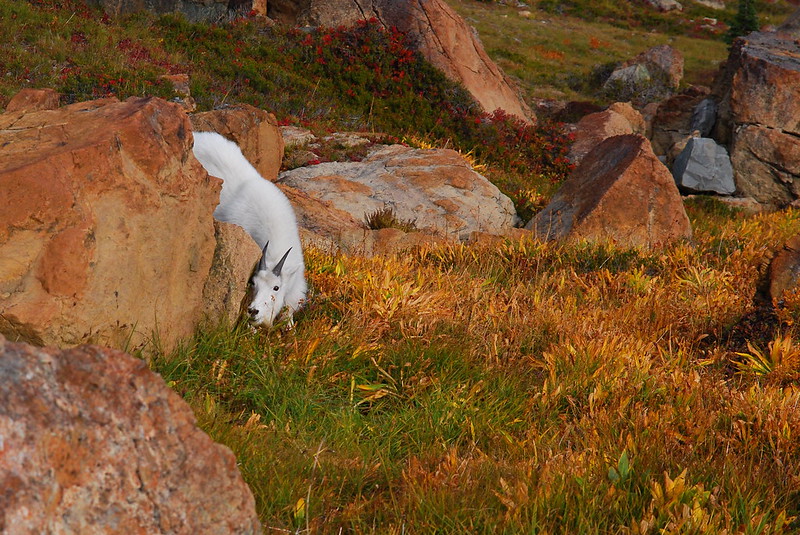 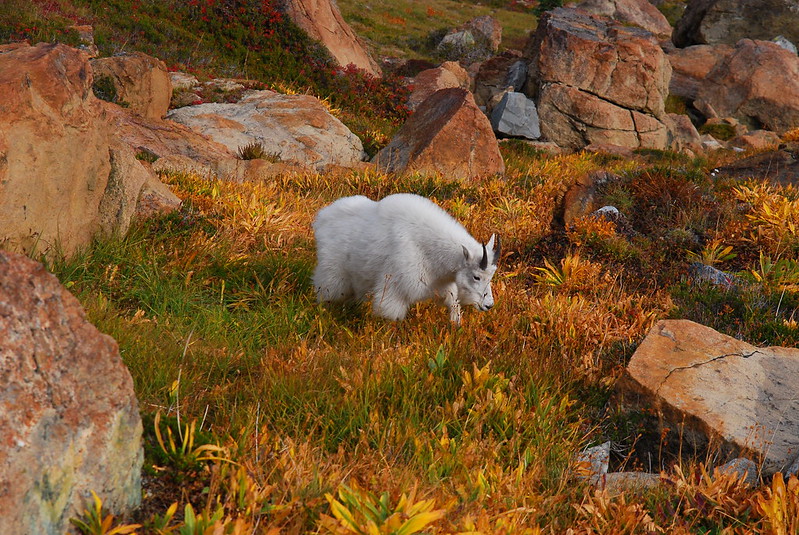 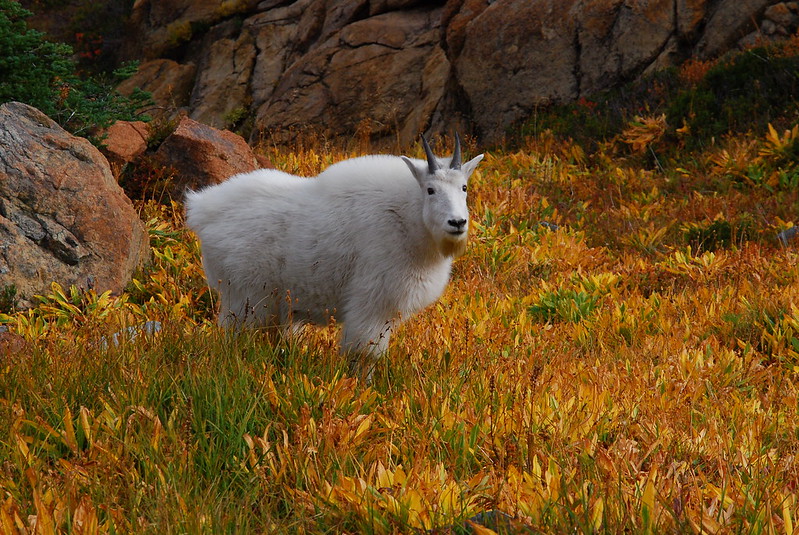 Too many pictures of goats? No? Nice. Here’s one more: 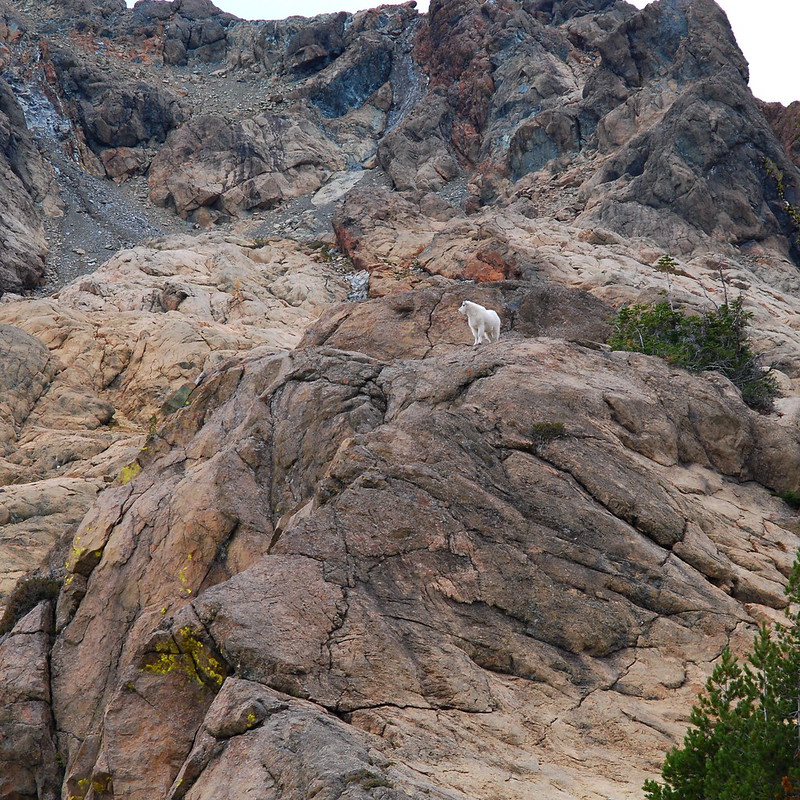 Anyway.. The trail to Ingalls Lake is funny. You’re contouring around Headlight Basin, you go up a short (steep!) hill, then suddenly you’re at this huge lake that seems to have come out of nowhere. Huge. I couldn’t get it in one picture, so here’s a panorama.

There’s no trail around the lake, but, if you head to the left, you can pretty easily pick your away across the western shore. Our guidebook claims that the eastern shore is impassable, but apparently it’s just a little bit of a scramble. 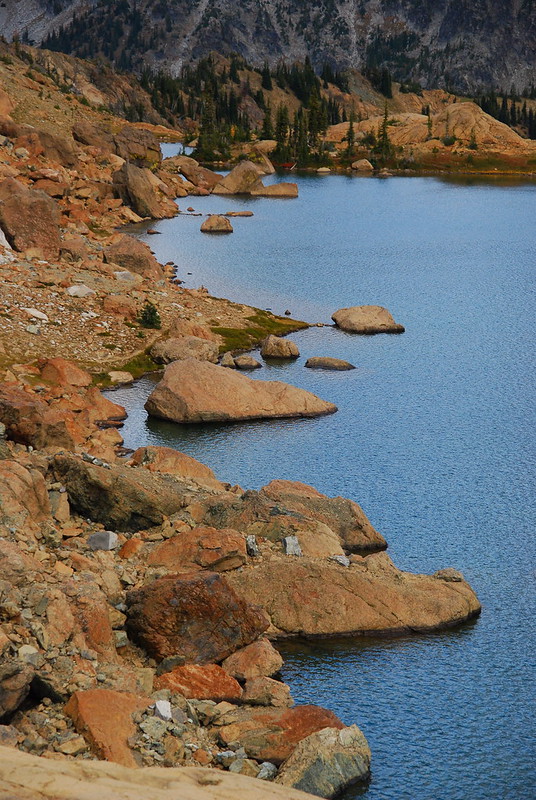 My favorite part of the lake was probably the north shore, where there’s a small, rocky inlet. And, of course, more goats. GOATS. 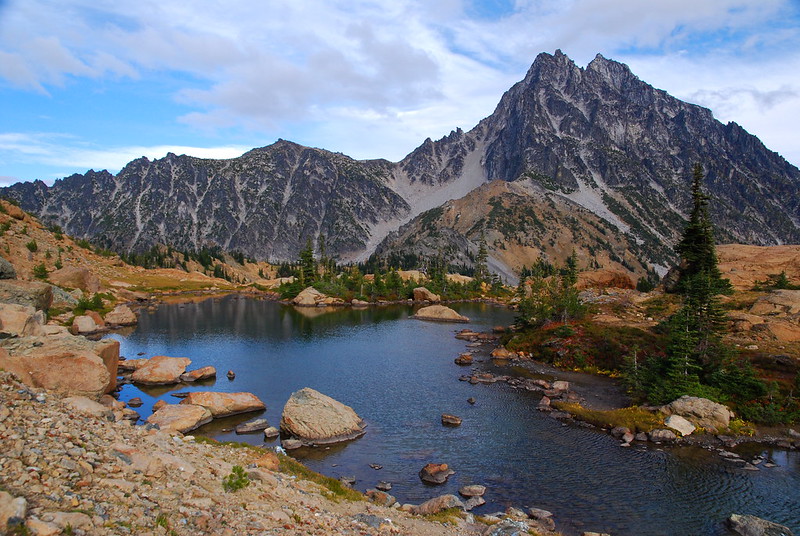 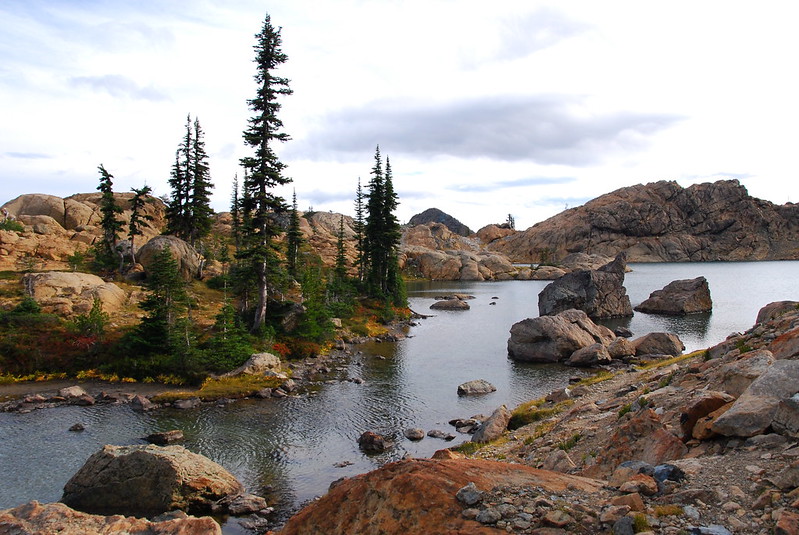 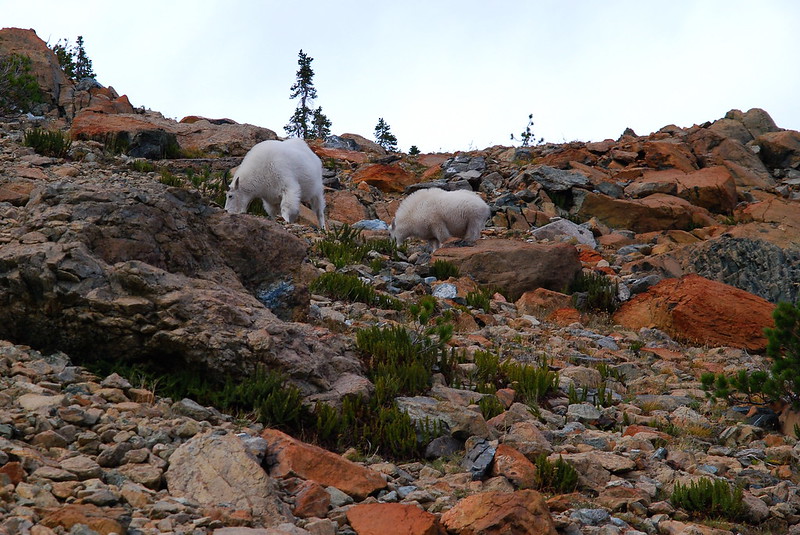 There’s also a beautiful little meadow below the lake and a ridge that you can follow to get to Stuart Pass. Things to explore next time… 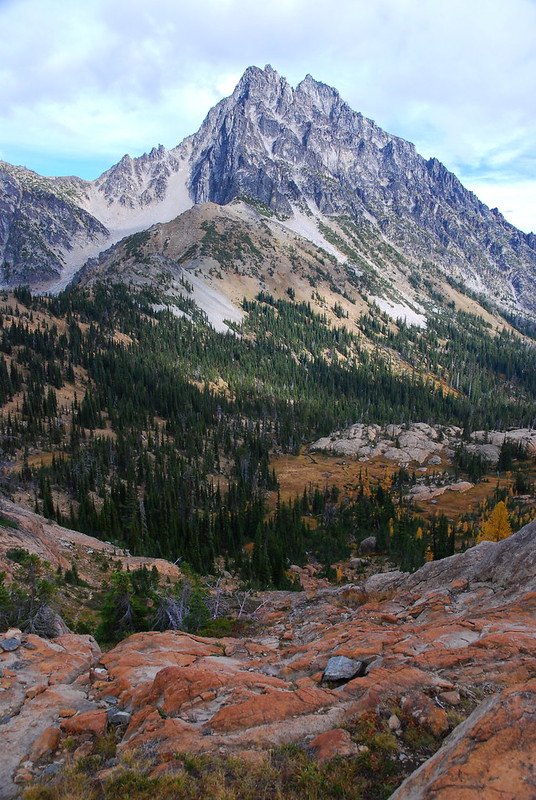 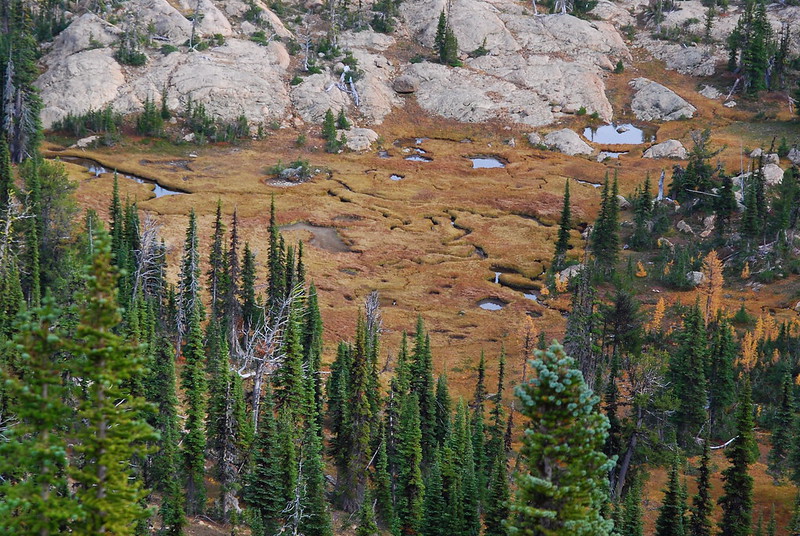 Before heading back, we walked a little ways up the ridge that eventually leads to Stuart Pass, and got a great view of the Jack Creek drainage. 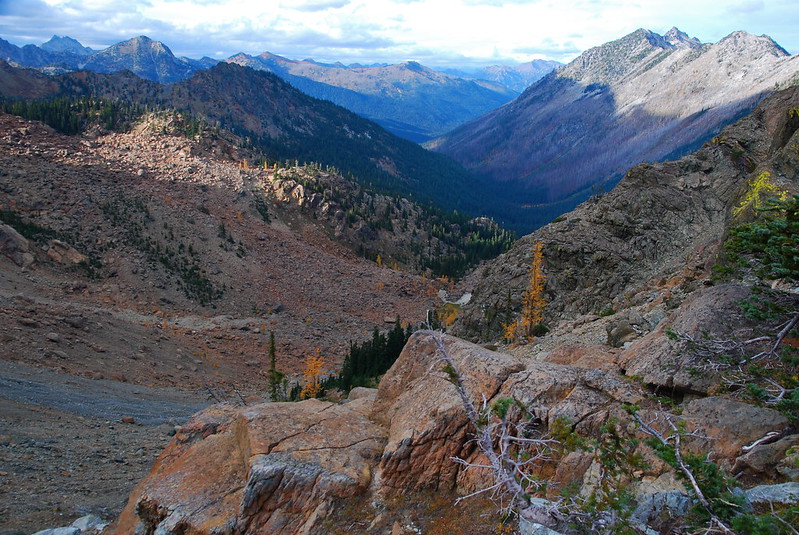 Heading back, there were (still more) goats, now congregating on the northeast shore for an evening snack. We headed back to do the same. 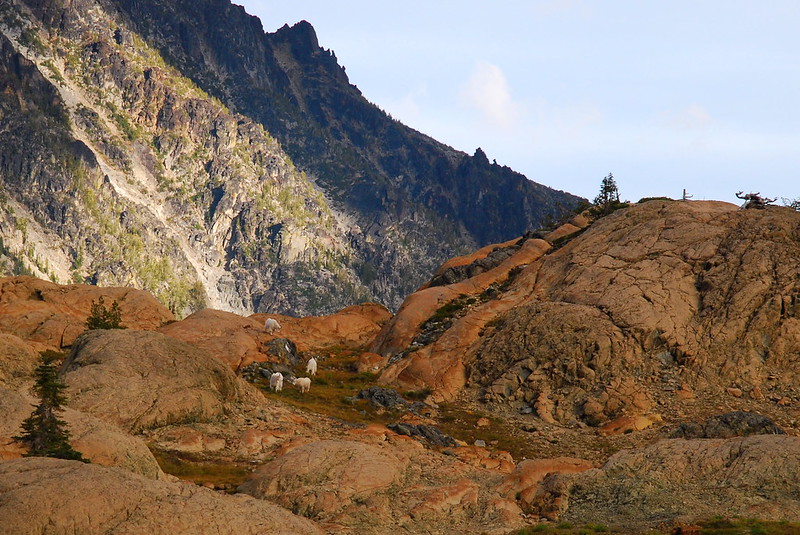 We had this delicious chicken, onion, pepper, and tomato thing. My dad’s a lot looser with weight than I am, and brought fresh vegetables, canned tomato, the whole thing. I could get used to eating that way.

Friday night was windy and a little rainy, but actually much better than the forecast warned. We woke up to clouds covering Mount Stuart. 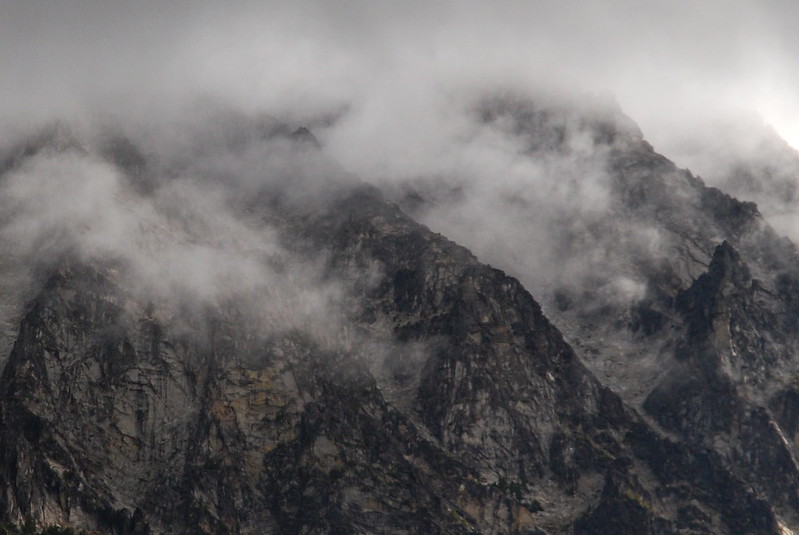 The weather got progressively worse as we packed up and started the hike out, but it was still nice enough that we took the short side trip to Longs Pass. It’s maybe half a mile and 700 feet up and definitely worth your time if you’re ever anywhere near. Here’s a view from the pass, looking down on Ingalls Creek: 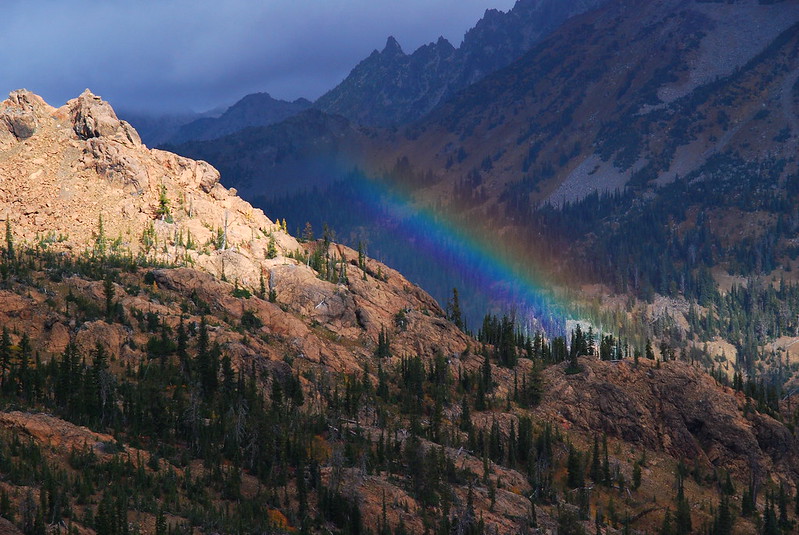 From Longs Pass, it was just an easy few miles back to the car. The rain became more and more constant, and we must have passed something like 200 (!) people headed up to see the larches. I hope their views were as good as ours.

One thought on “R Solo: Alpine Lakes Larches (and Goats!)”