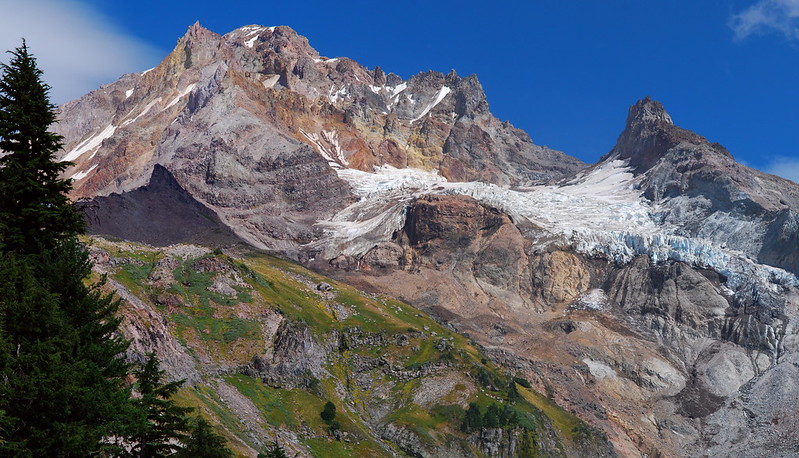 Weekend before last, Krista and I had been vaguely discussing backpacking somewhere, but we’re in the middle of preparing for the John Muir Trail (we leave in three days!), so we figured it’d probably be best just to do a dayhike Saturday, and give Sunday to the millions of errands that seem to keep multiplying. Neither of us had ever been to either Ramona Falls or Yocum Ridge, and it’s a pretty quick drive from Portland, so we decided to give it a go.

We both wake up feeling just… shitty. I don’t know what’s going on. Maybe we’ve got low level colds? I don’t know. We decide to head out with the caveat that we’ll probably turn back at the falls, maybe have dinner in Hood River.

We leave Portland around seven, make the de rigueur stop at Joe’s Donuts in Sandy, and drive up the completely paved road to the enormous Ramona Falls parking lot. The lot feels weird. There must be room here for a hundred cars. There’s broken glass and a couple outhouses, one of which seems about to fall over.

The initial trail is flat, wide, and just about as posh as it gets. 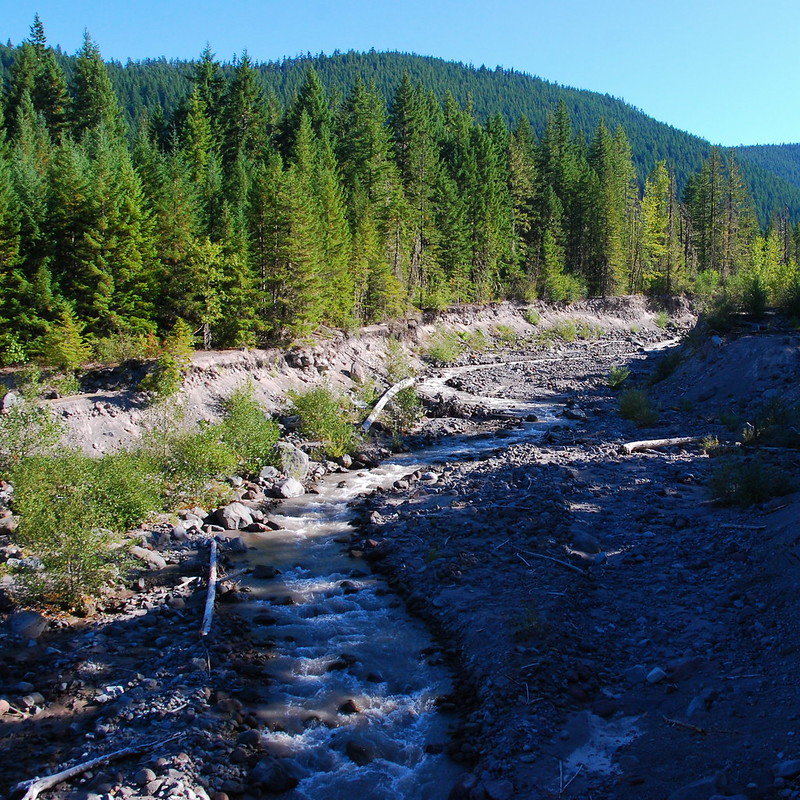 We more-or-less arbitrarily decide to take the southern (riverside) fork of the Ramona Falls Trail on the way up, which, we later realized, is considerably less pleasant than the northern (creekside) fork. Still nice, though. 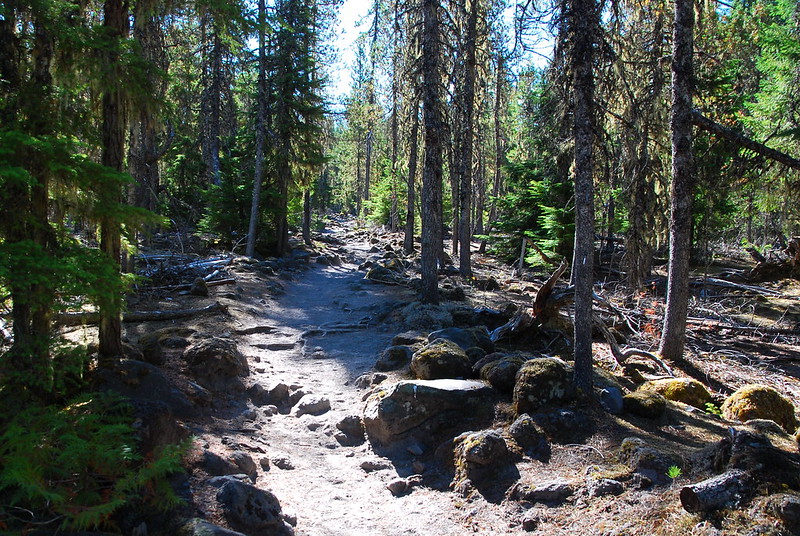 When we get to Ramona Falls, we’re both amazed by its sheer bigness. We’ve of course both seen a million pictures of it, but it’s just much… well, bigger in real life. 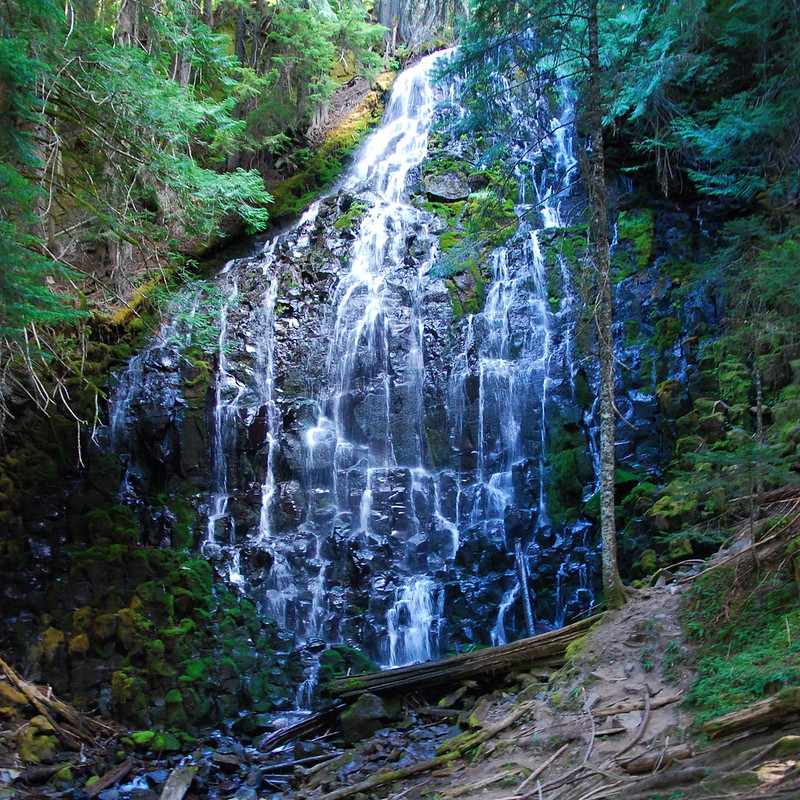 We stop for a quick snack, and watch a few groups of unleashed dogs run around on the “closed for restoration” areas while their seemingly unaware humans look on with pride. Ugh.

I’m not sure what it is, but the section of the Timberline Trail between Ramona and the Yocum Ridge cutoff is just gorgeous. There’s an ancient bridge fading into the hillside, crossing a swampy area. Skunk cabbage climbs up the hill. 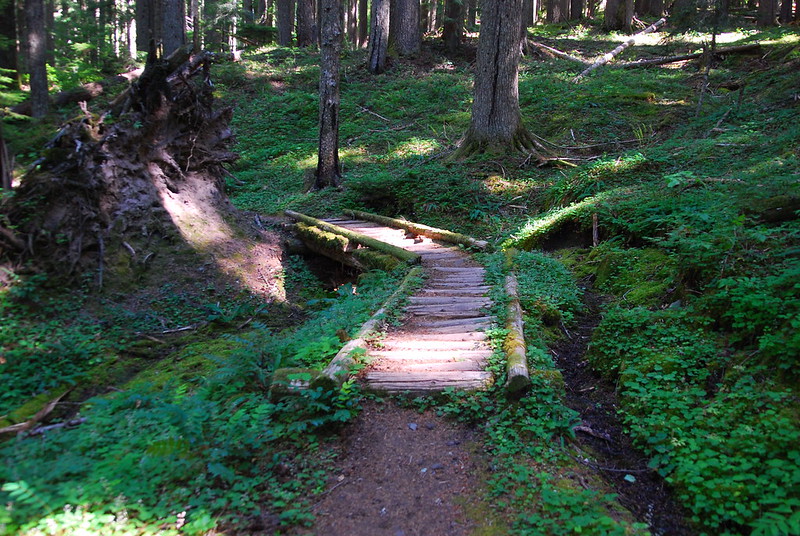 The Yocum Ridge Trail itself is sort of a green tunnel. There are a bunch of spent rhodies toward the bottom, which I’m sure were amazing a few weeks ago… 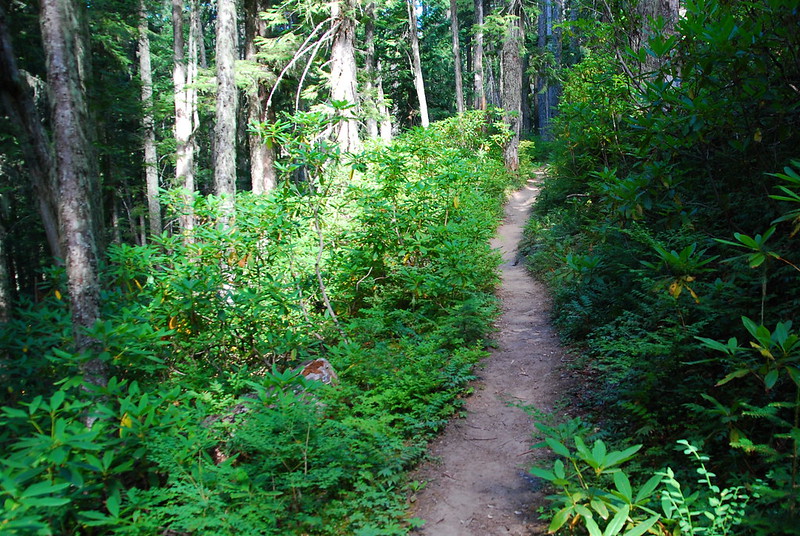 …but otherwise it’s just pleasant, kinda anonymous forest. In the first few miles, there are a few dozen log crossings. This trail is still officially maintained, but, well… the joke is that MHNF (Mount Hood National Forest) actually stands for “Might Happen Next Fall.”

Around 5000′, the views start to open up a little to the north, onto the Muddy Fork and a bashful Mount Adams. 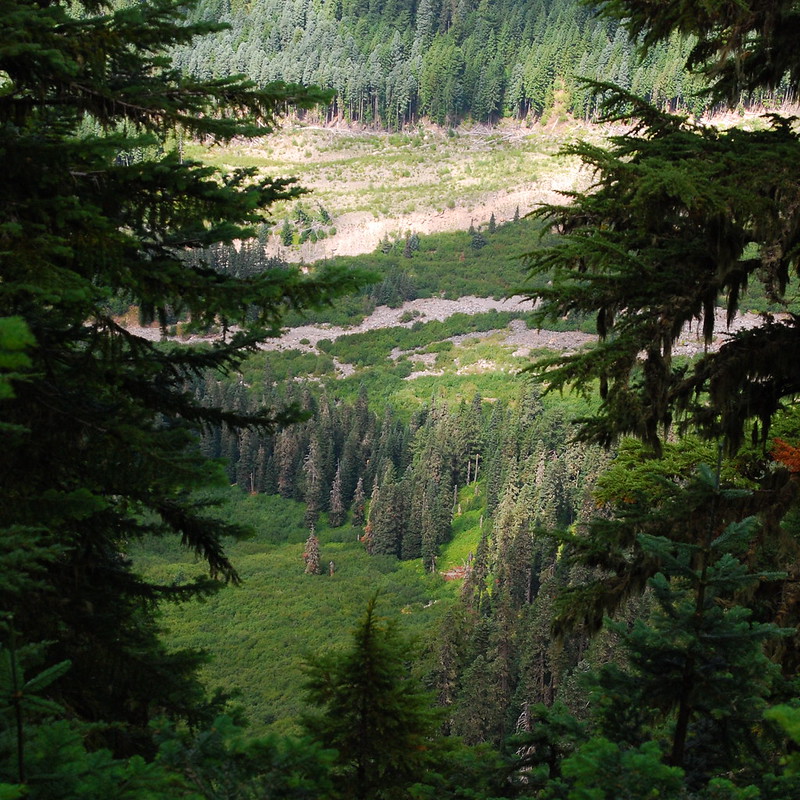 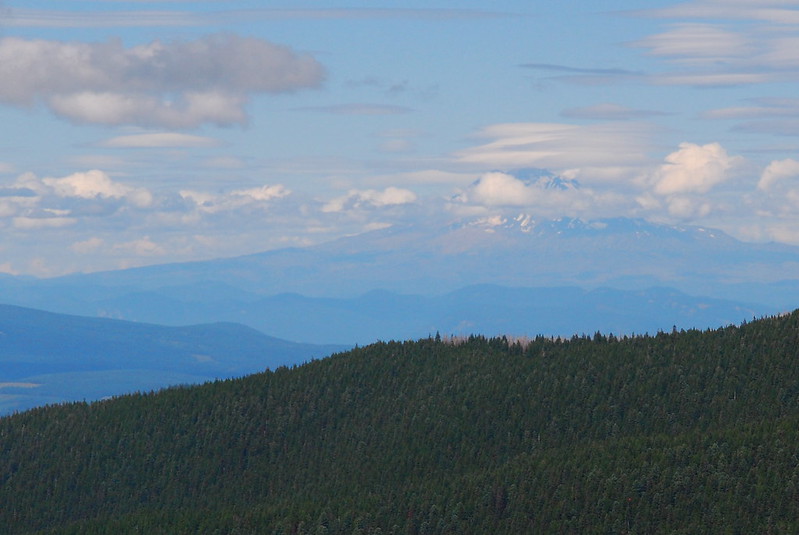 We stop for an extremely late breakfast at a creek around 5300′ – the first, and last, running water we see after Ramona Falls. “How are you doing?” We’re both lagging.

In the background, I think, is the idea that we have to do this, because we might be sick or tired or whatever on the John Muir Trail too, and we have to prove to ourselves that we can still make our miles regardless.

I make a cup of coffee, which helps, and we continue up as the trail switches back into open meadows.

As we enter the meadows, the views open up to the south. Here’s Jefferson, looming over Paradise Park: 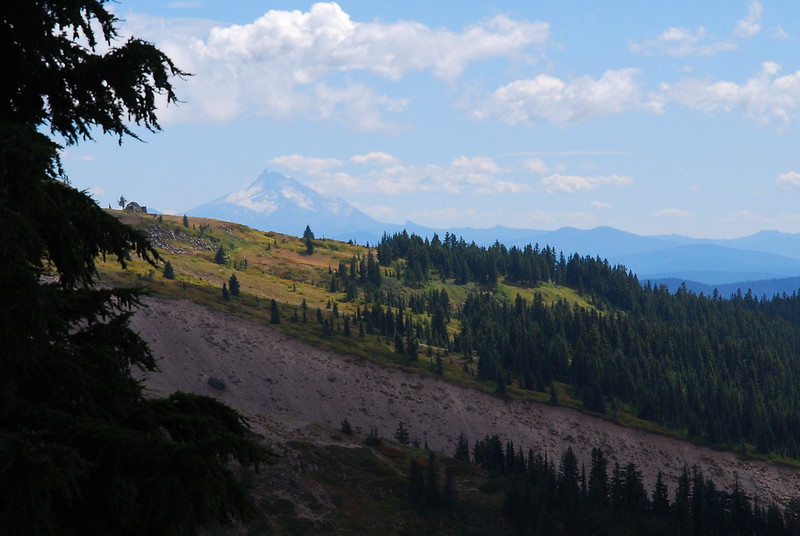 I bet the meadows are just incredible when the flowers are blooming. We’ll have to head up earlier next year. 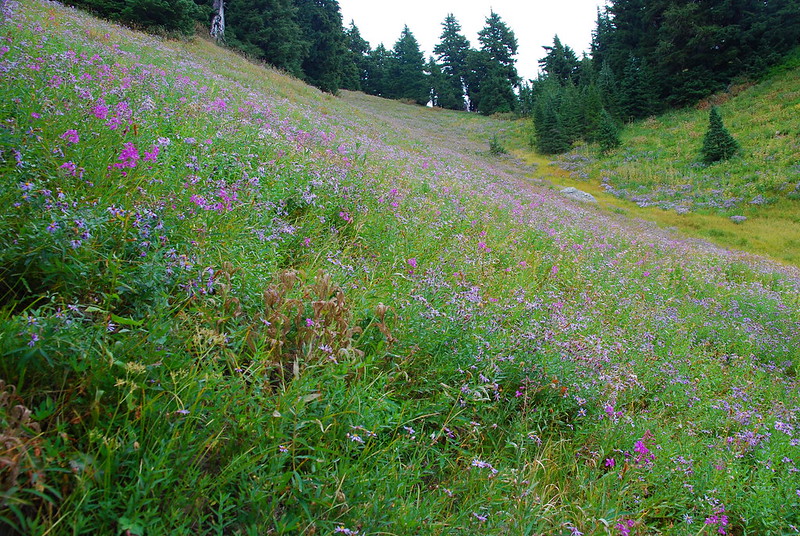 And then… the views! When we get there, Hood’s feeling a little foggy. 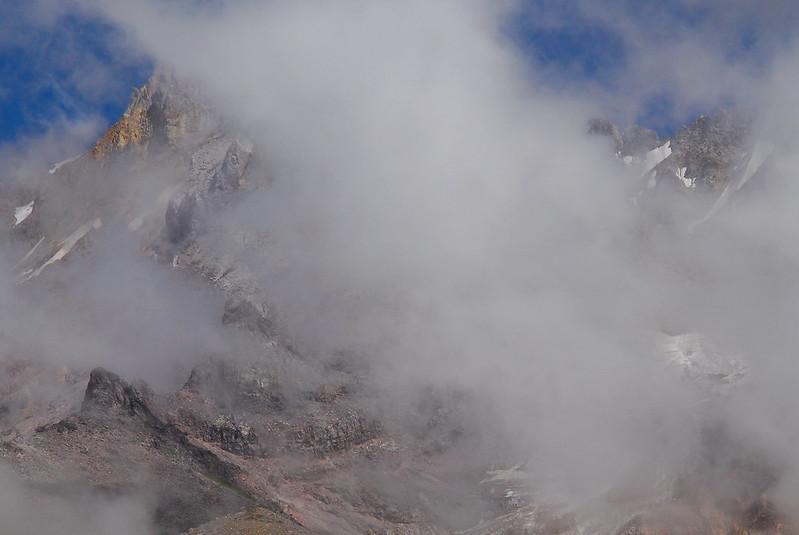 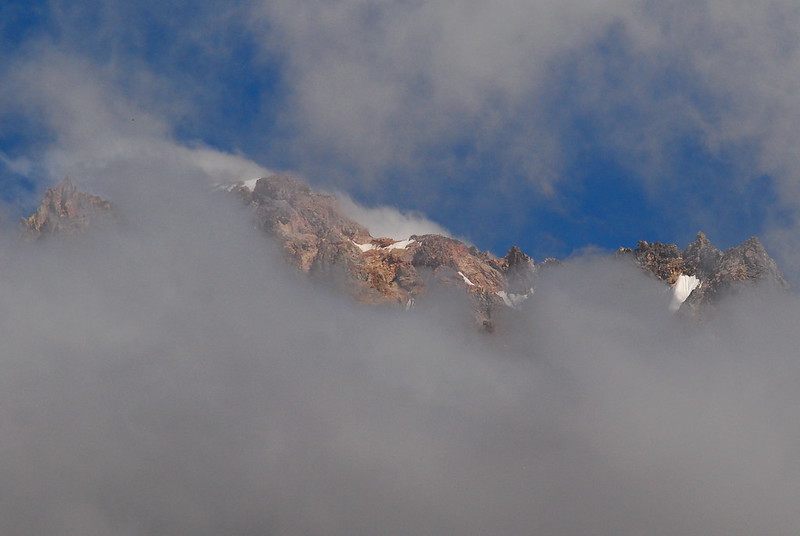 But, as we sit there gawking, things begin, slowly, to clear up. 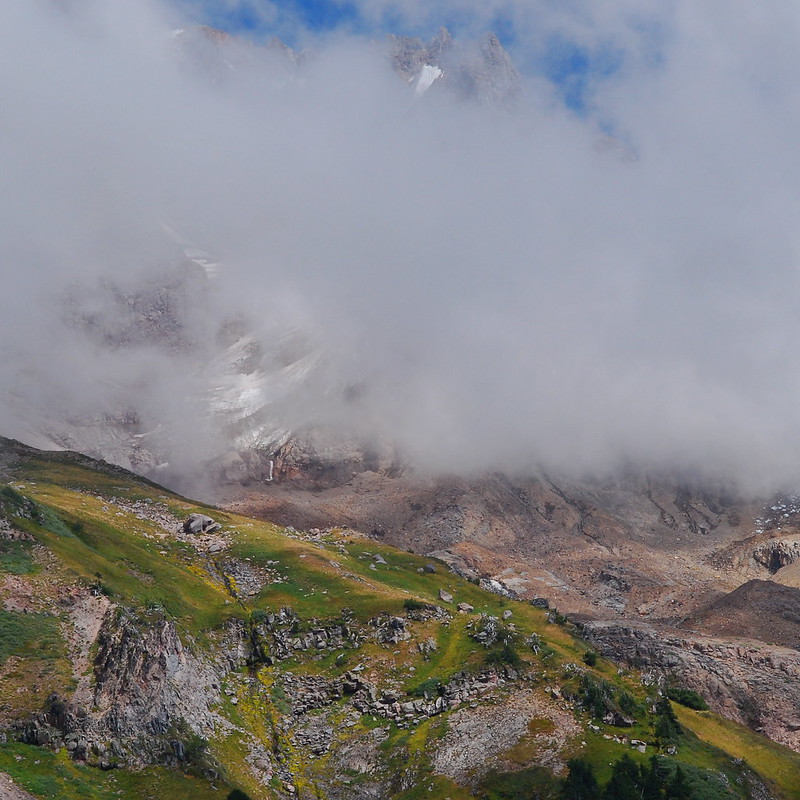 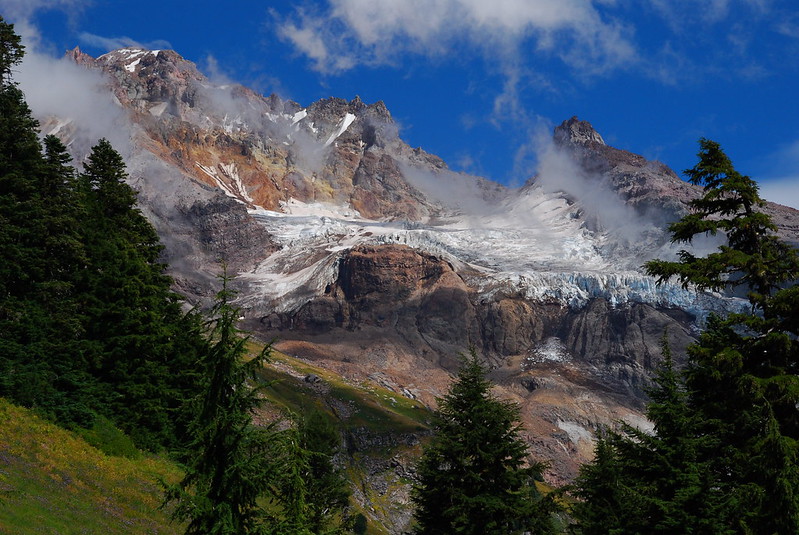 I take roughly 2.74e32 versions of this picture: 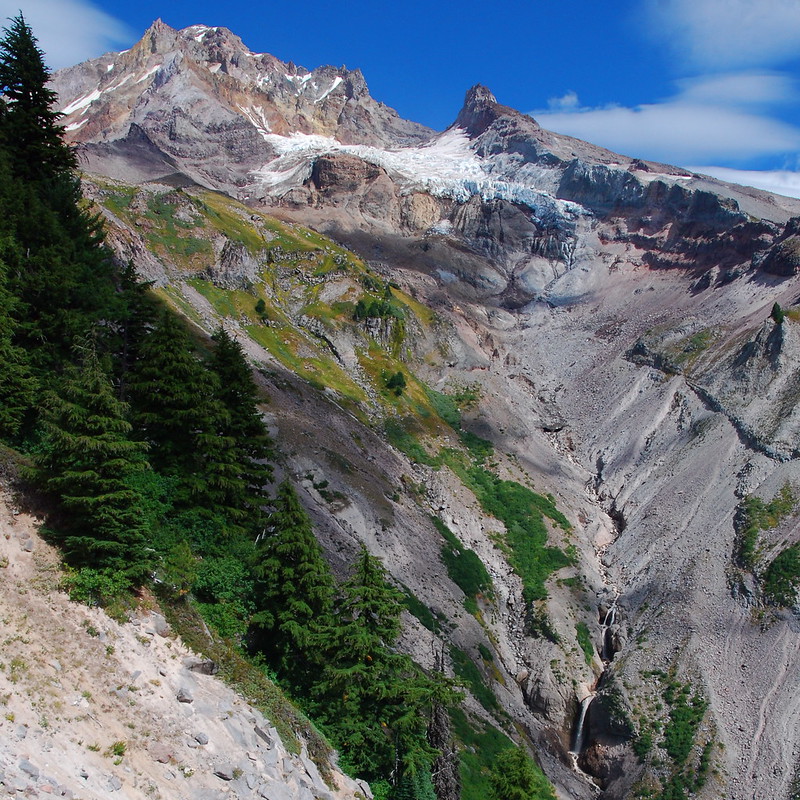 But I’ll just keep it to two here: 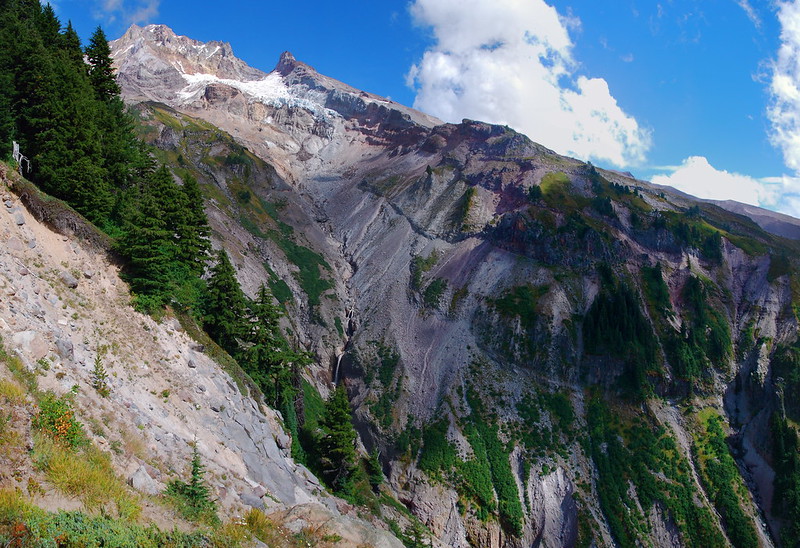 There’s so much to see up there that it’s difficult to put the camera down. Later, judging from my pictures, I seem to have pointed it in random directions and clicked. For half an hour.

I love watching the Sandy River emerge from the Reid Glacier. (Yes, I realize this doesn’t make any sense.) 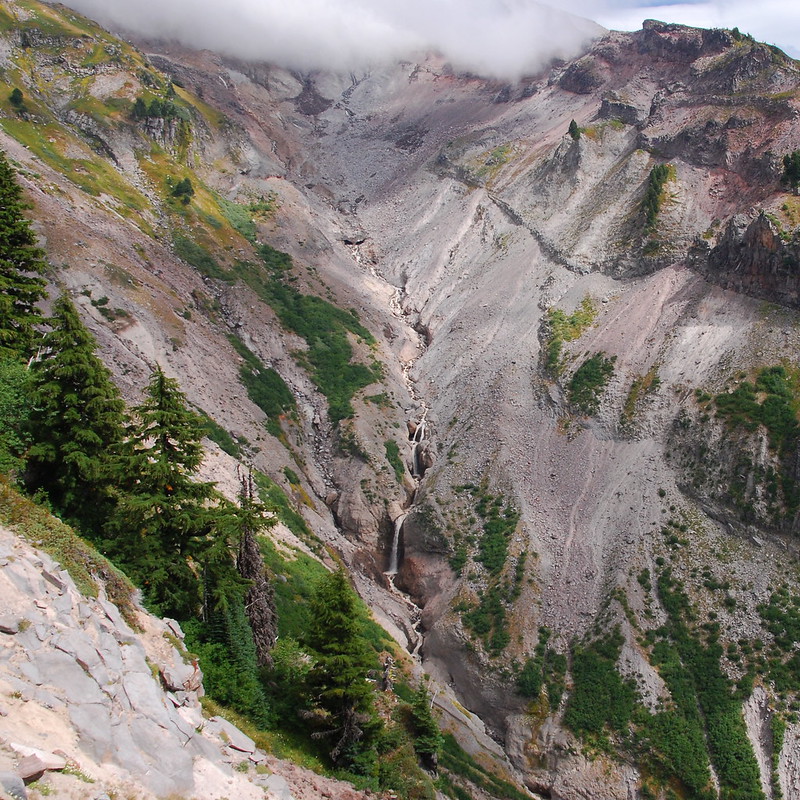 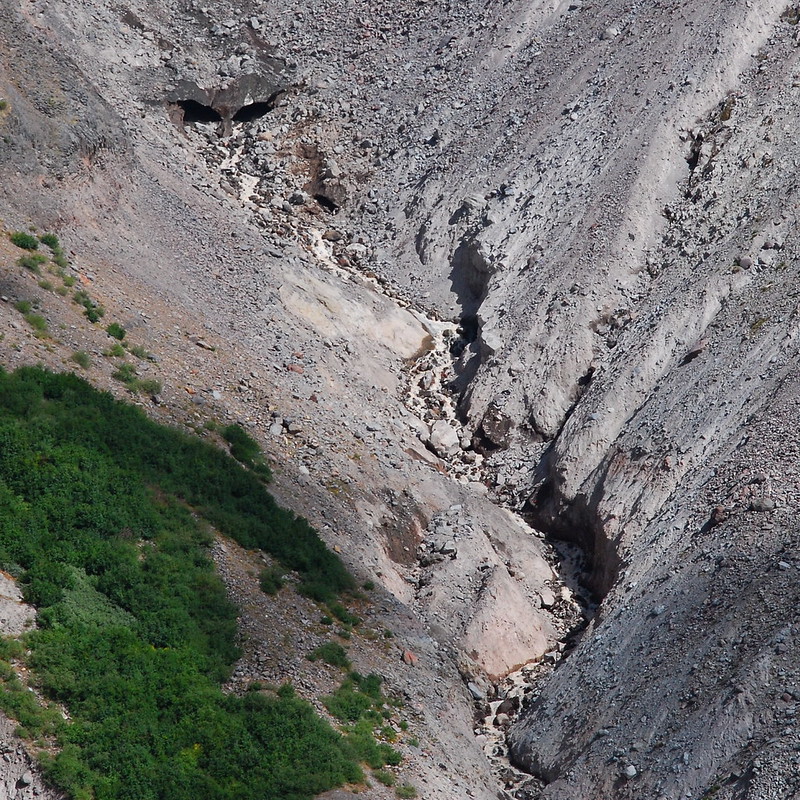 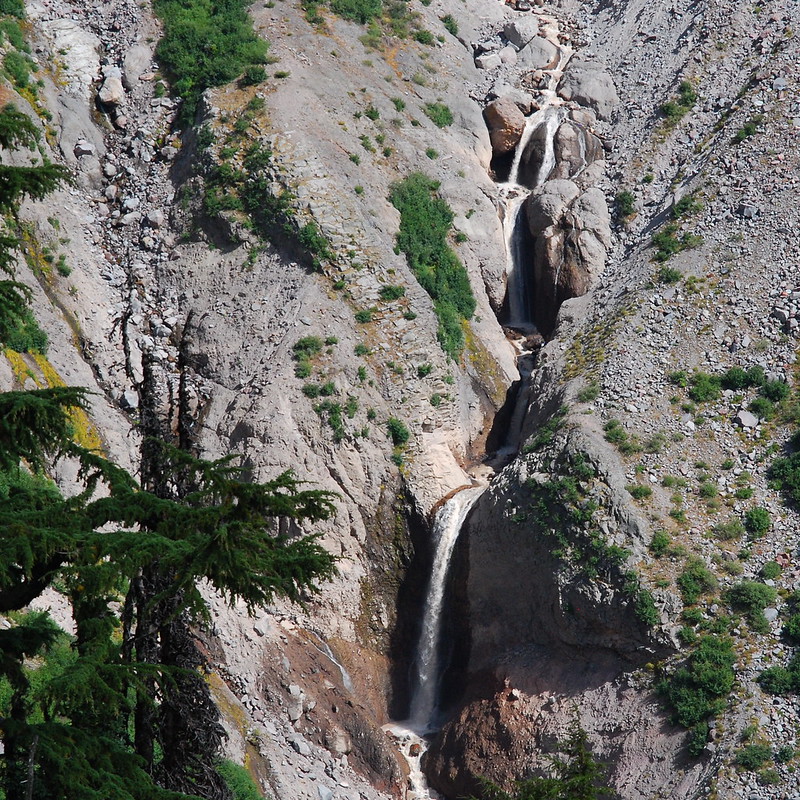 The glacier’s no slouch, either. 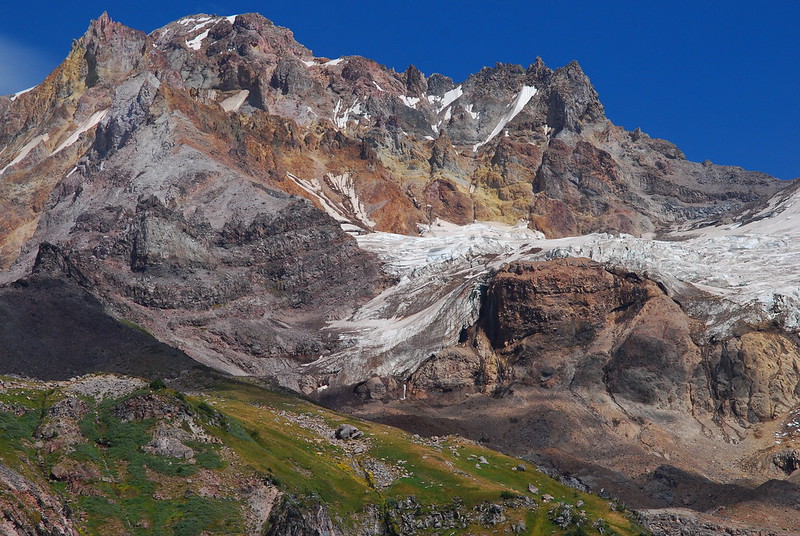 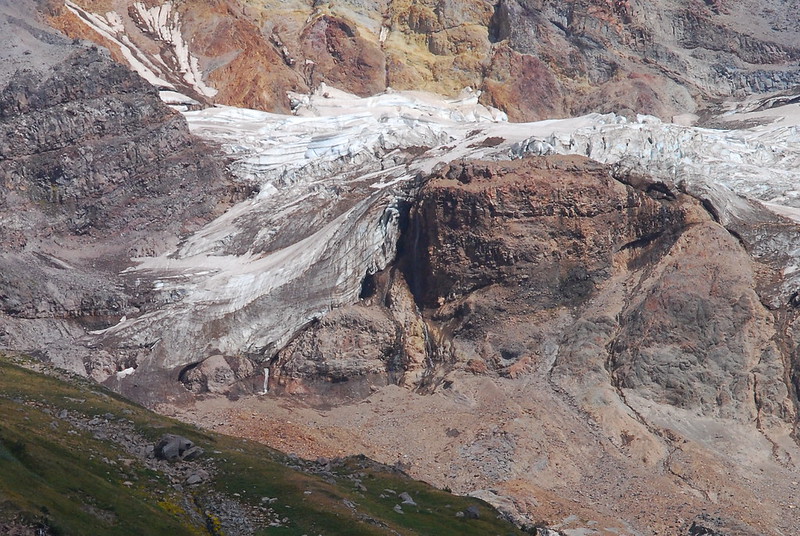 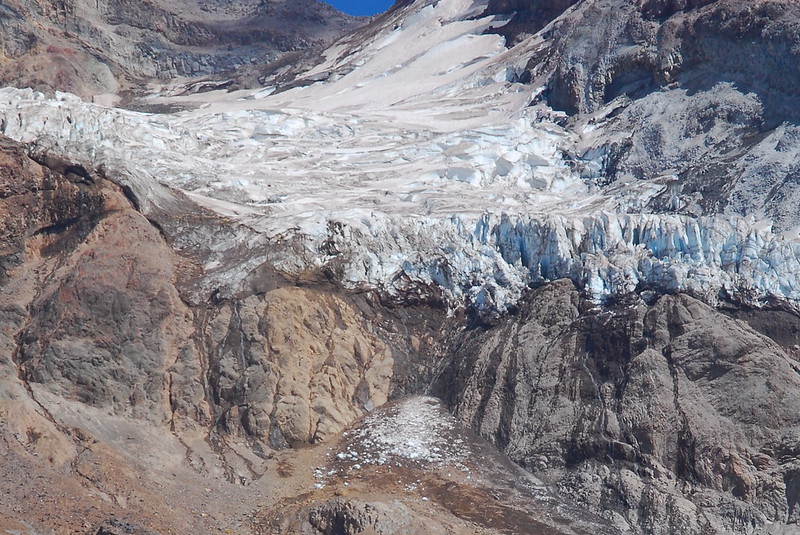 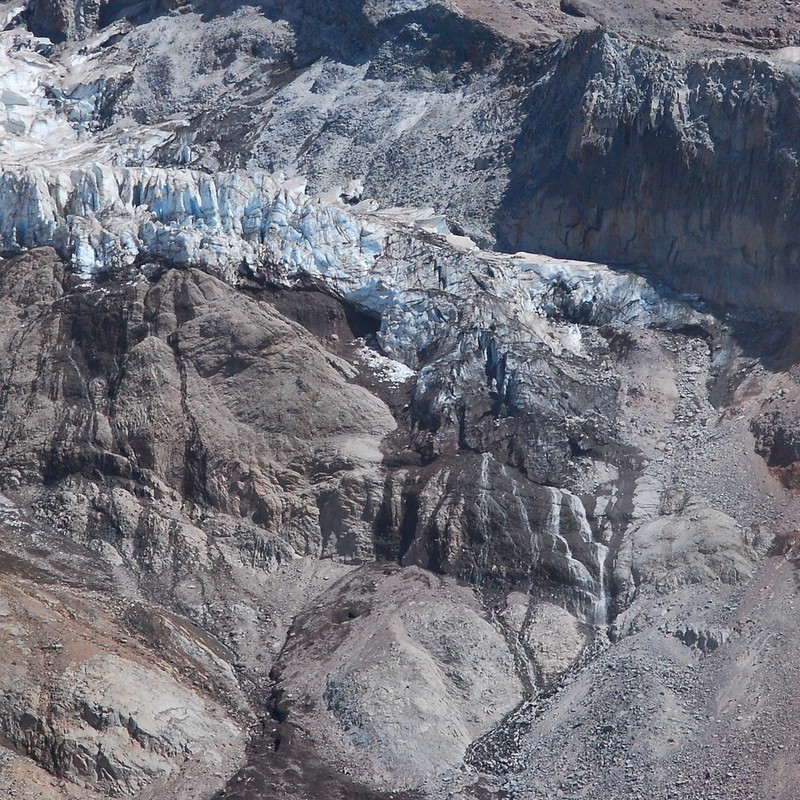 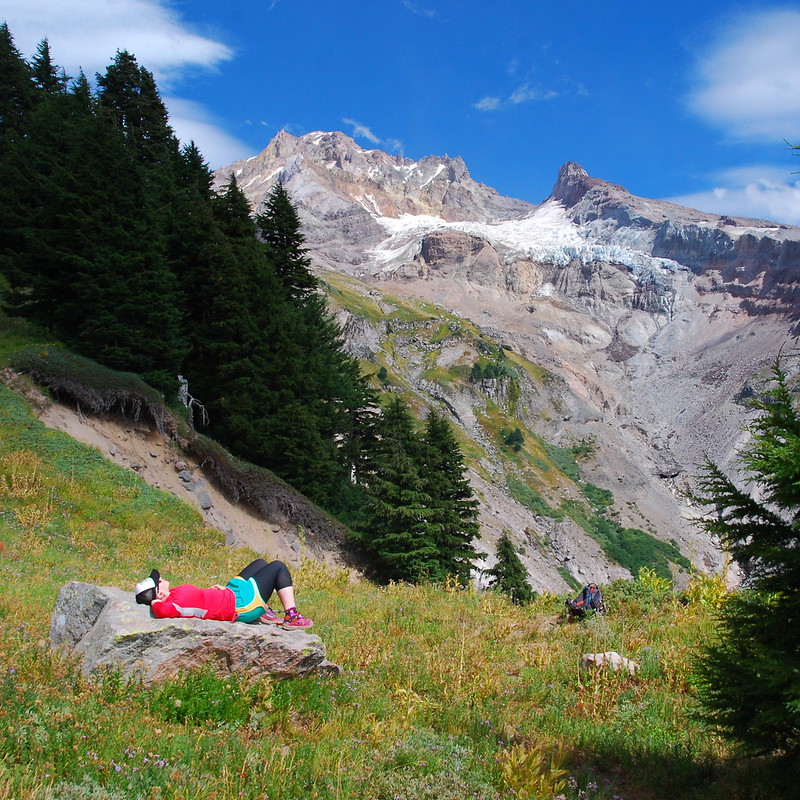 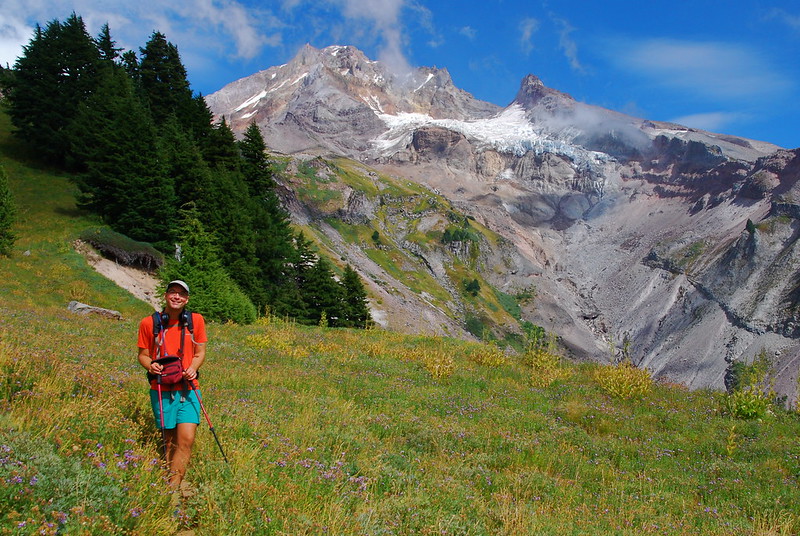 We’d set a firm turn-around time for 3:00. Always sticklers for that sort of thing, we turn back at precisely 3:45.

On the way down the Yocum Ridge Trail, we take turns pretending to be gymnasts crossing the blown down logs, rating each other for style. Krista’s specialty seems to be efficiency. Mine seems to be clumsiness, though my dismounts display hella flair. We both top out around 9.2, which, all things considered, seems about fair. On fresh legs I’m pretty sure I could get it to 9.5.

The way down goes a lot quicker than the way up. Before we know it, we’re back at Ramona Falls, which is still crazy crowded, then we’re walking along the beautiful, northern (creekside) Ramona Falls Trail. There are a few campsites along the way, and we think about coming up some time in the winter to snow camp. When we get back from the JMT, it’ll be fall. 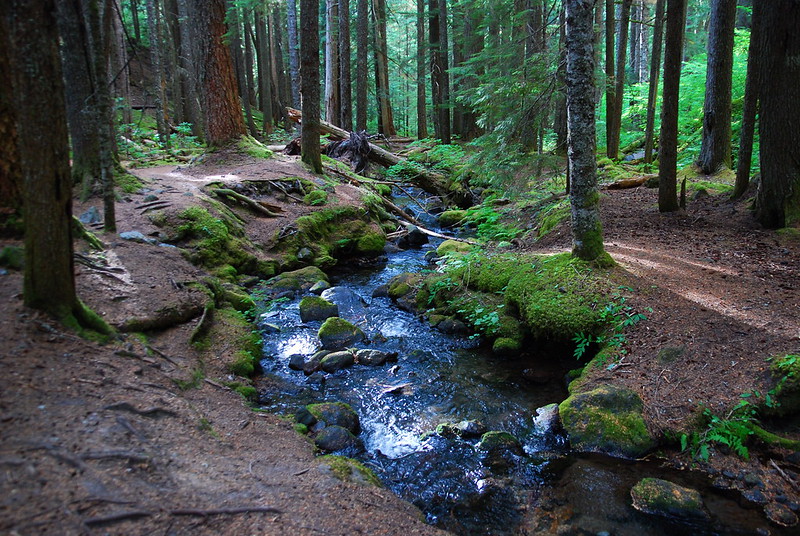 We stop for a while where the trail crosses the Sandy, soaking our feet in the silty water. 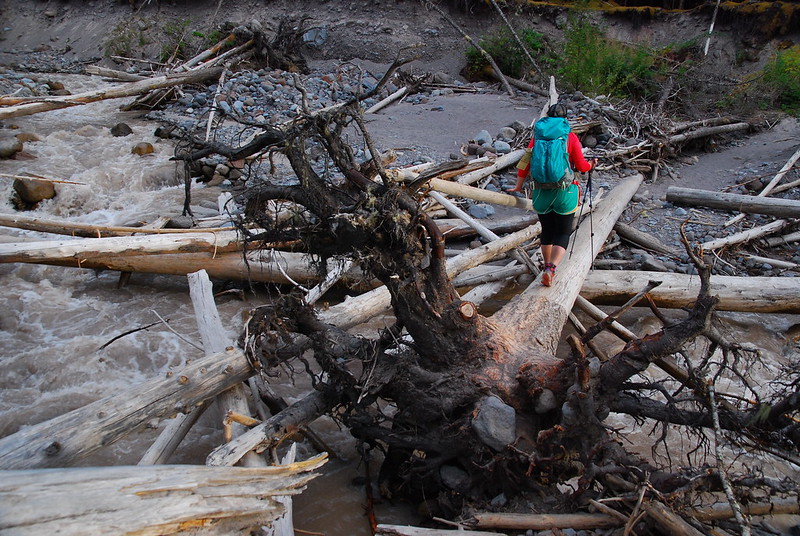 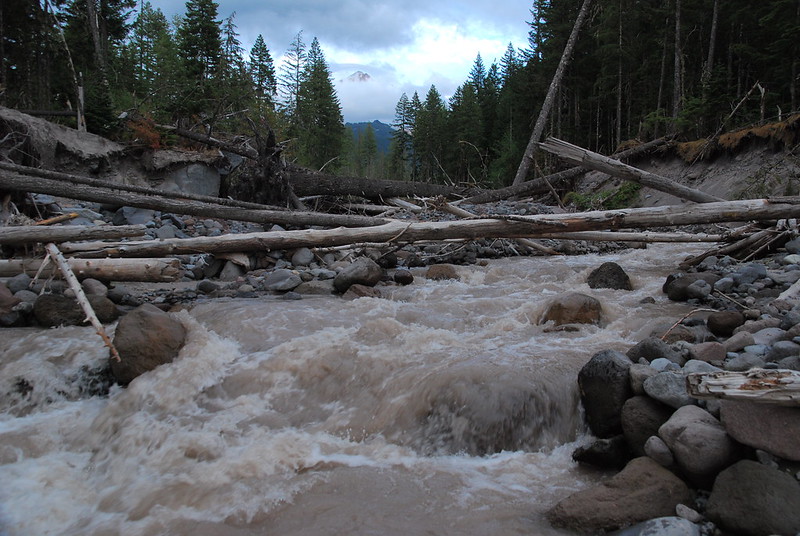 Someone died here at this time last year, when rain swelled the river and washed out a bridge. And someone died a decade earlier in the same condition. There are signs in her memory all around the mountain, warning people to be careful.

I think about all this as we watch a few families walk easily over the bridge, pause curiously to look at the two dirty hikers with their legs in the water, then continue on the posh trail.

After the last one, we wait a couple minutes, and follow suit, down the darkening trail as the sun sets.

We can do this. 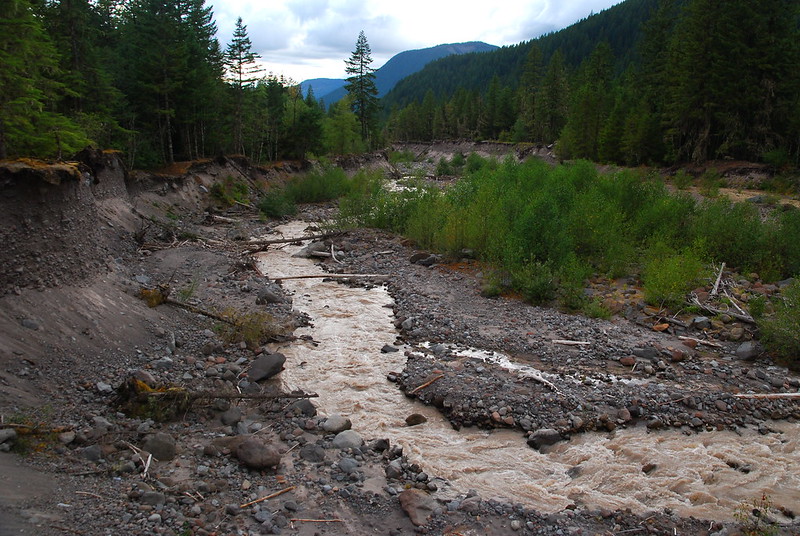 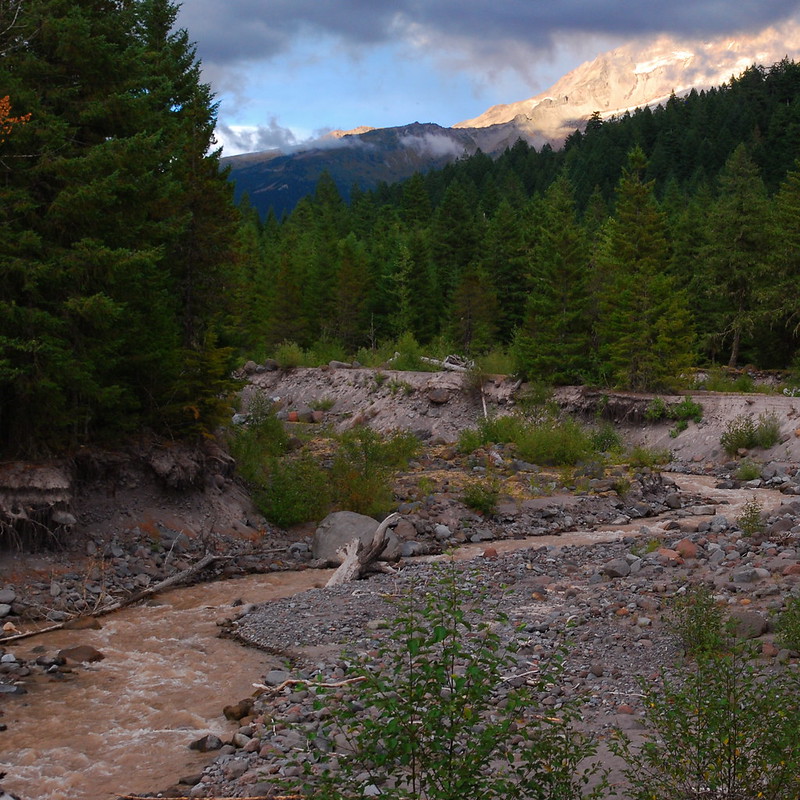