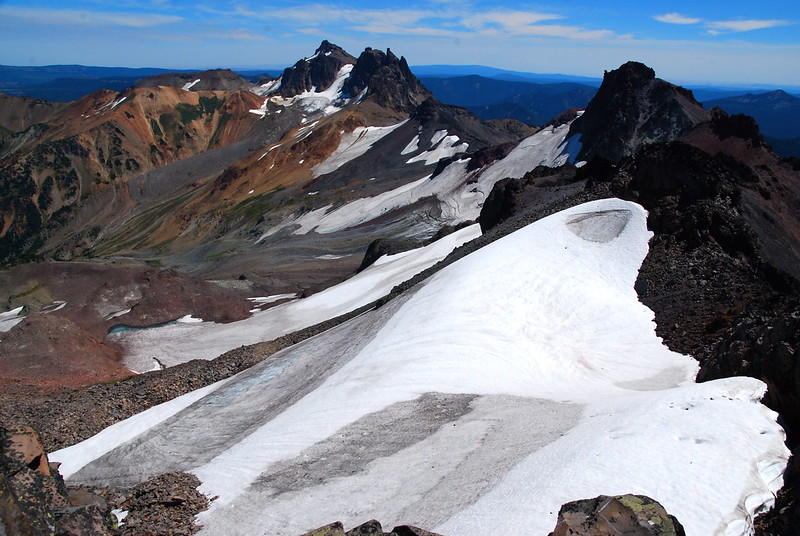 Krista and I had already done the Goat Lake Loop a few weeks before, as a day hike, but in late July my cousin was in town from Texas, and it seemed like a nice, easy-ish one night backpacking trip to take him on. So my cousin, my dad, my brother and his girlfriend, and I headed out Thursday and Friday, for a beautiful, sweaty, sunny trip.

We leave Portland hilariously late – around ten – and arrive at the Berry Patch Trailhead around 1:30. There’s no water at the trailhead, but there’s a spring just to the northwest, on what I imagine to be the trail to Chambers Lake. After filtering some water, we set off up the hot, hot trail. I’m usually pretty good with heat, but man. It’s fucking hot. We’re all struggling.

After a couple miles and a couple liters of sweat, we hit the open areas just south of Jordan Basin. There’s a gentle wind, and everything suddenly seems wonderful. 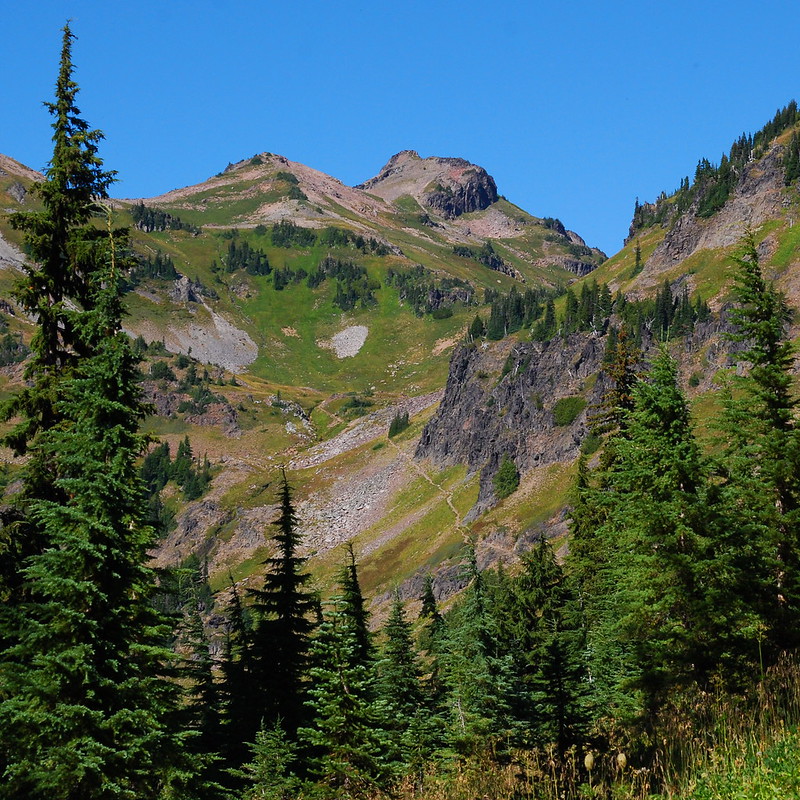 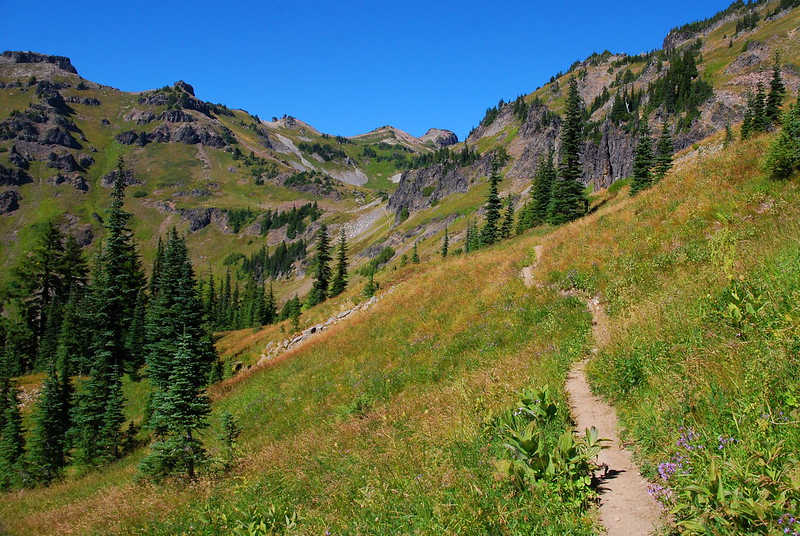 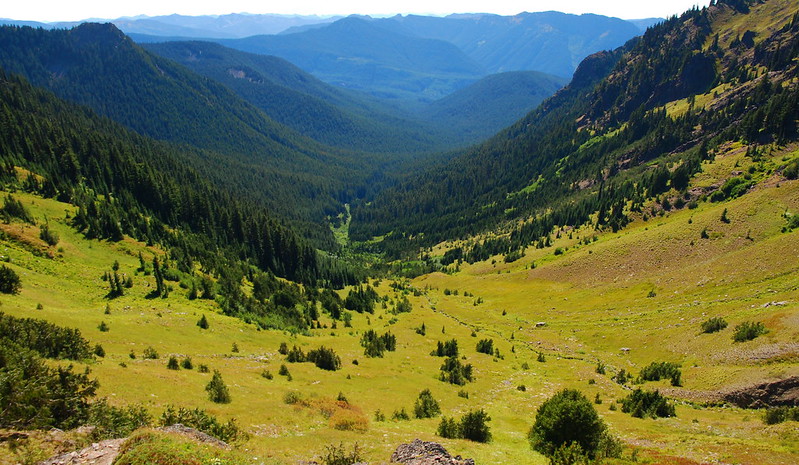 We stop to filter some more water near the headwaters of Jordan Creek – did I mention that it’s hot? – then make embarrassingly slow progress to the pass just south of Hawkeye Point.

After the pass, we coast down to the lake, somehow on empty, despite the short hike in. Maybe I’m not as good with heat as I thought… 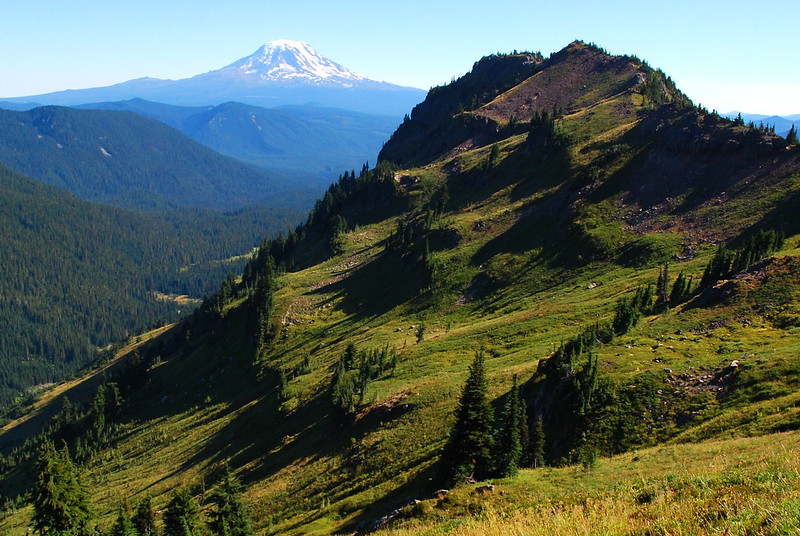 We make it to the delightfully uncrowded lake a little before five, set up camp, and settle in for a mellow night of eating, drinking, and watching the sunset. 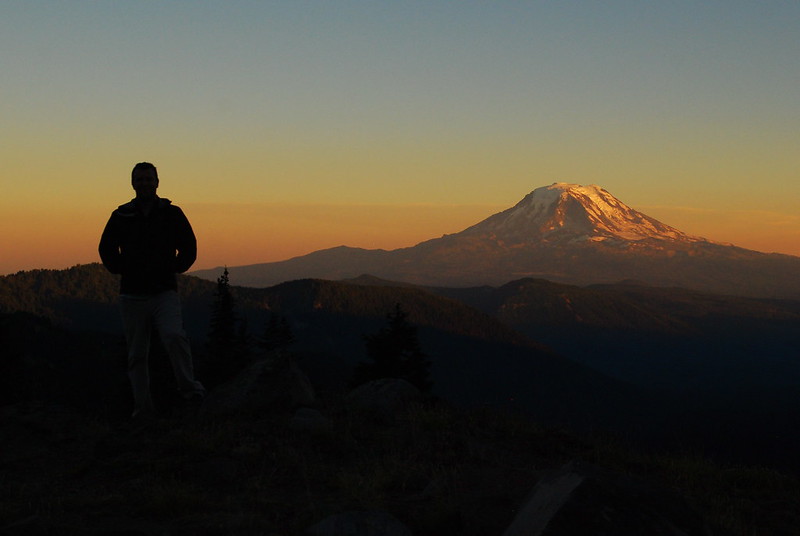 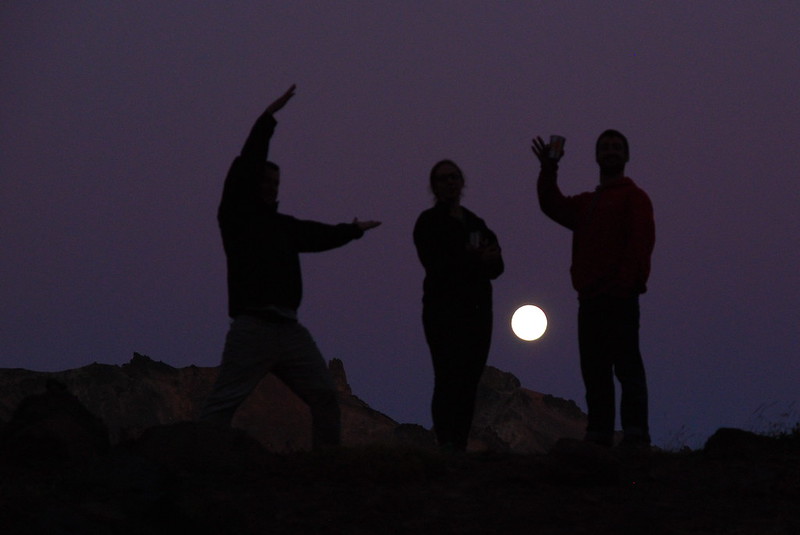 I wake up a few times Friday morning to helicopters very close overhead. I’m not sure what was going on – maybe a fire nearby? a rescue? – but they’re long gone by the time we wake up in earnest, around 7:30.

We have a leisurely morning, meandering over to Goat Creek to filter water, eating a big breakfast of oatmeal and blueberries, and drinking our weights in coffee. 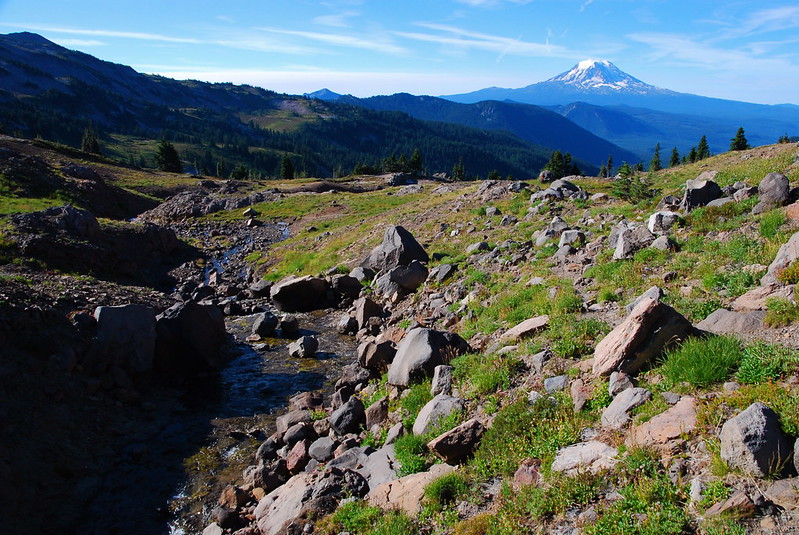 After breakfast, we go out on a “short” dayhike, mostly off trail to the PCT just below Old Snowy and, for some of us, up Old Snowy. Starting out: 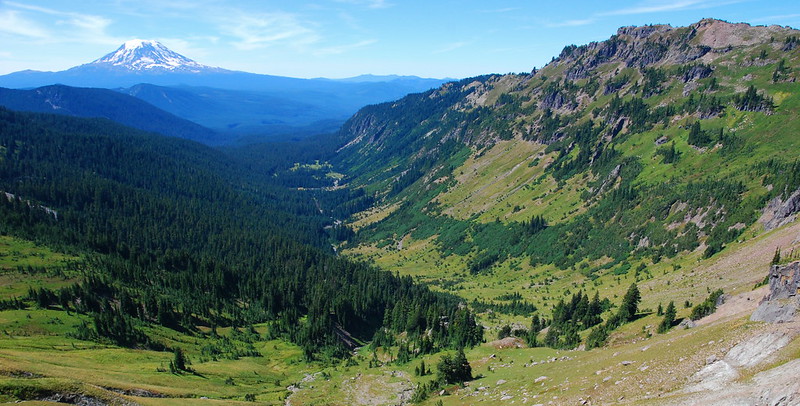 Getting to Old Snowy from Goat Lake is a little tricky. It’s doable on trail, by following the Lily Basin Trial to just above Snowgrass Flats, cutting over to the PCT, and taking that up. But that route forms a large, long horseshoe. Instead, we go off trail near where the Lily Basin Trail turns due South and cross a few sometimes steep rock fields.

The beginning of our route:

At first, we head up the ridge just west of the Packwood Glacier a little too soon, and end up with good views but no good route. 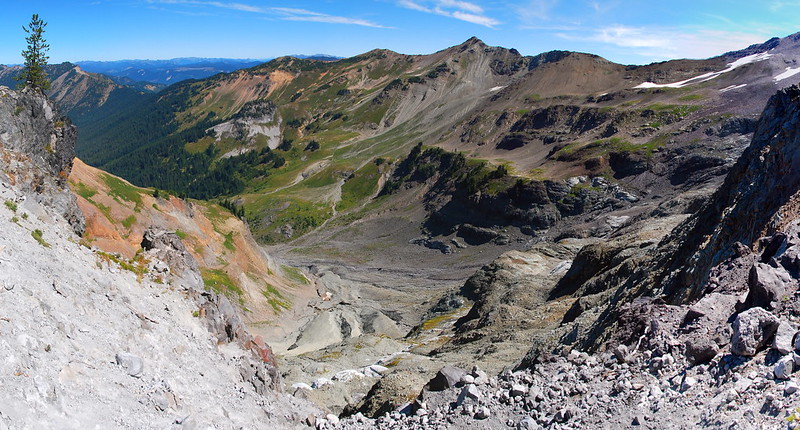 After heading back south off the ridge, we eventually find a good way up, following a stream east up the side of the ridge. Hey Rainier! 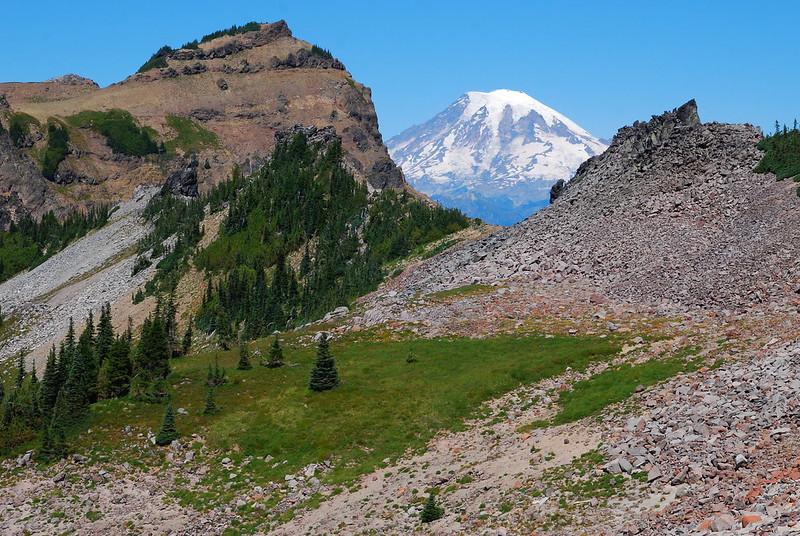 The going was sometimes a little steep. 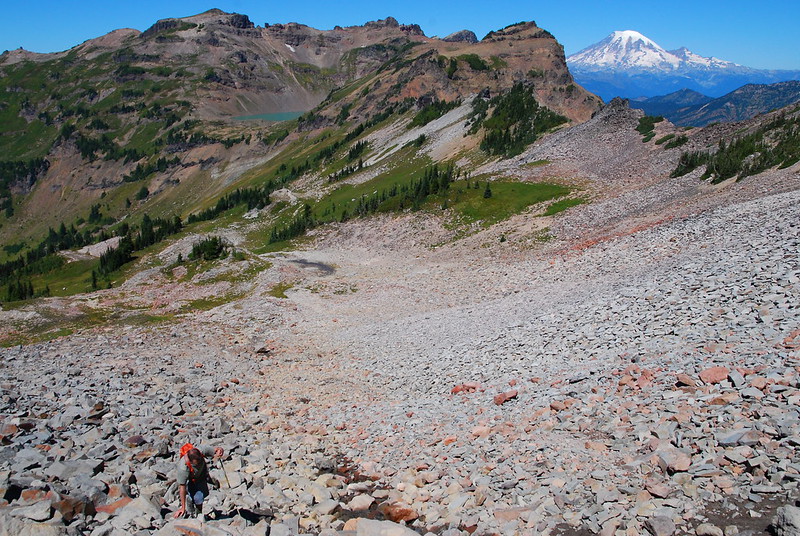 After a lot less trouble than I was expecting, we hit the PCT, and unanimously decide it’s lunch time. 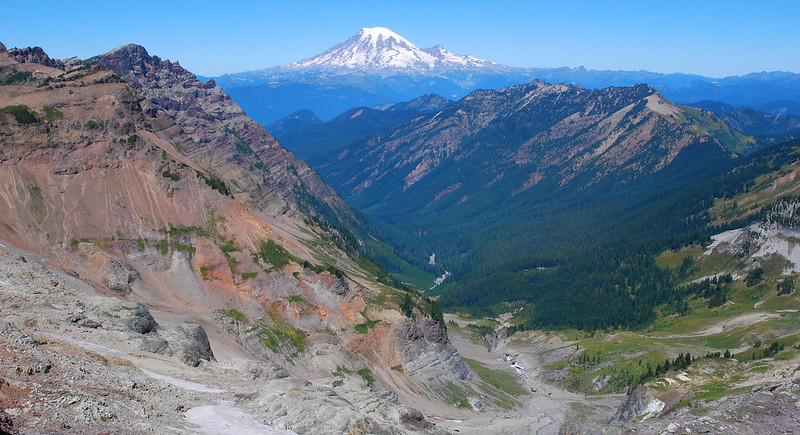 Just west of Old Snowy, the PCT splits, with the now official route passing over the Packwood Glacier, and the older route, now an alternate, ascending most of the way up Old Snowy, to what was once its high point in Washington, around 7600′. We start off following the official route…

…but there’s a steep snow field maybe halfway across the traverse above the Packwood Glacier, which seems like a bad idea for someone new to hiking. So we retrace our steps and head up the alternate, toward Old Snowy. Around 7400′, my cousin and brother’s girlfriend decide to call it quits and wait for my brother, dad, and I to take the quick jaunt to the top. 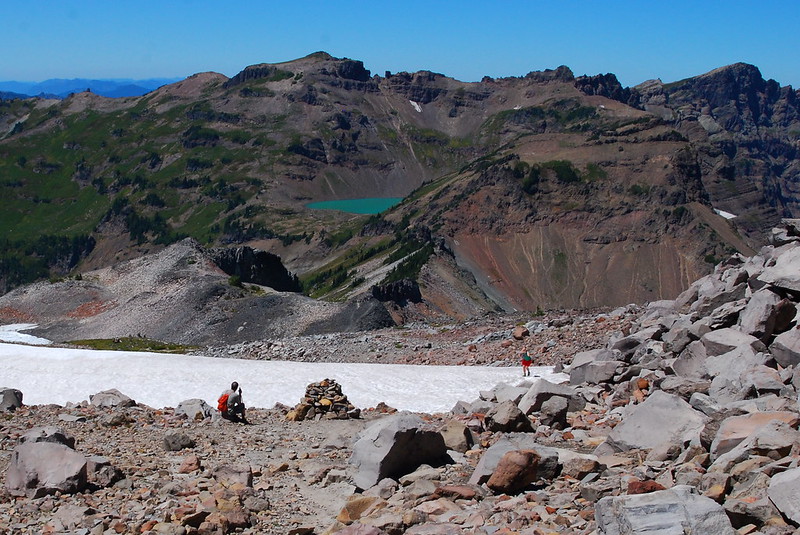 The last couple hundred feet up Snowy involve a little scrambling. It’s nothing too bad, certainly nothing bad enough to dissuade anyone otherwise interested in getting to the top, but there are definitely a few spots where I watch my step. It’s very, very worth it…

Here’s my brother and dad. Note my bro’s maximalist sunscreen style. I’m so down. 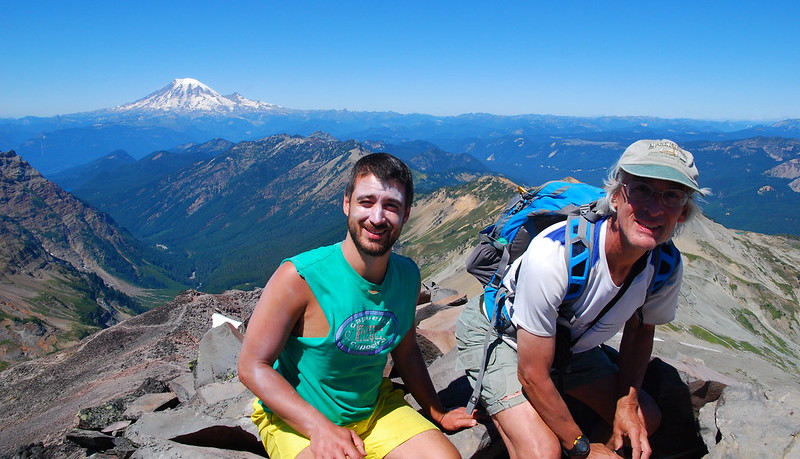 A little worried about time, we only stay a couple minutes on top, then head back down toward the PCT, and back toward camp. 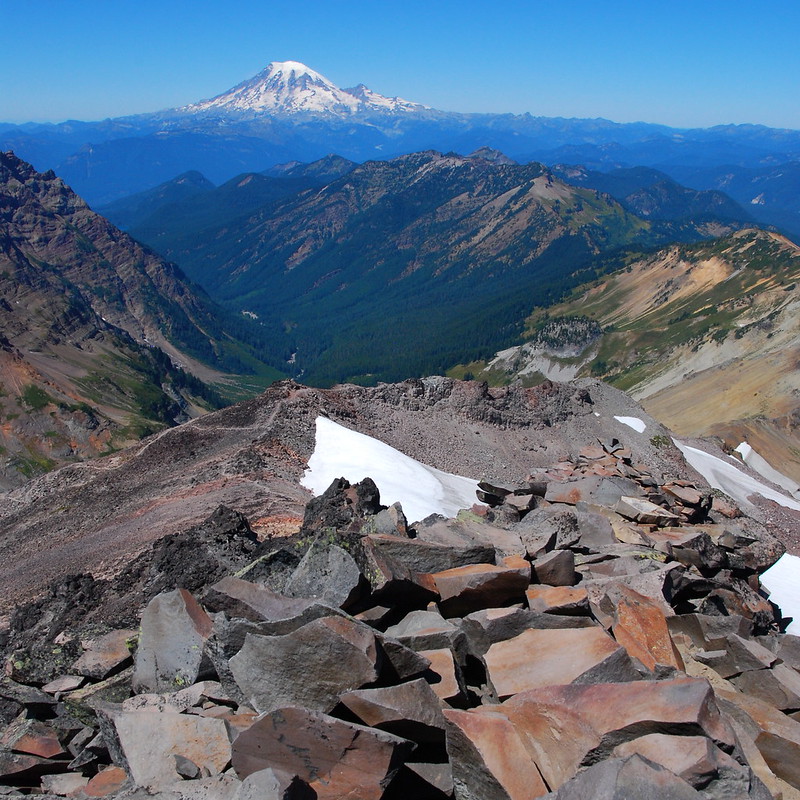 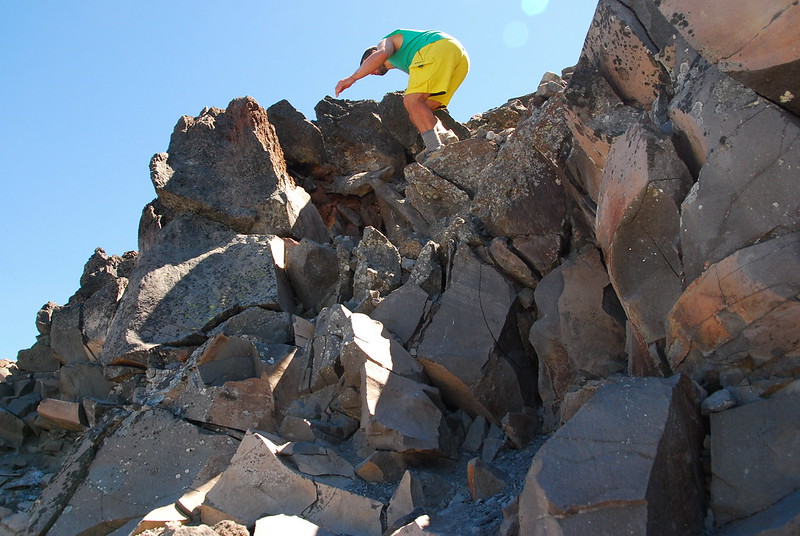 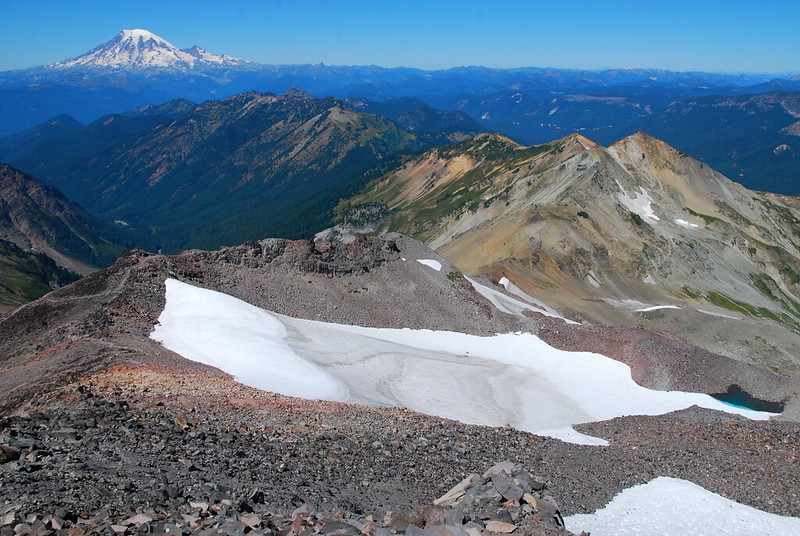 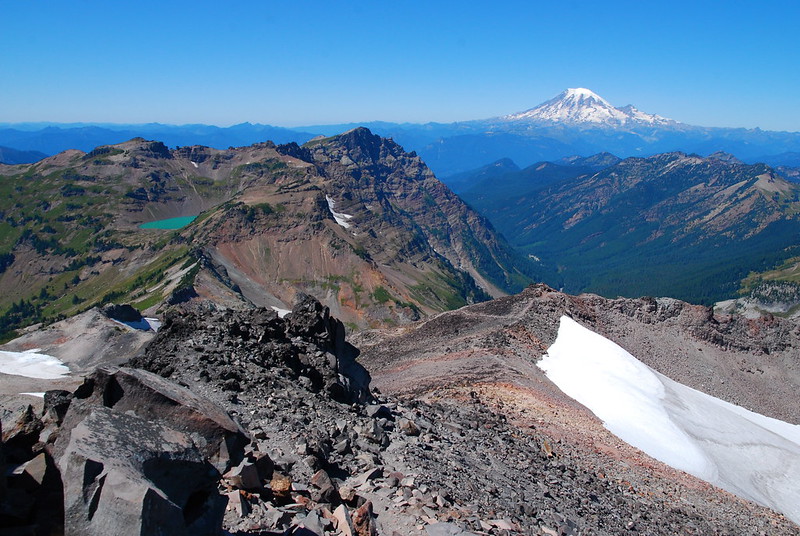 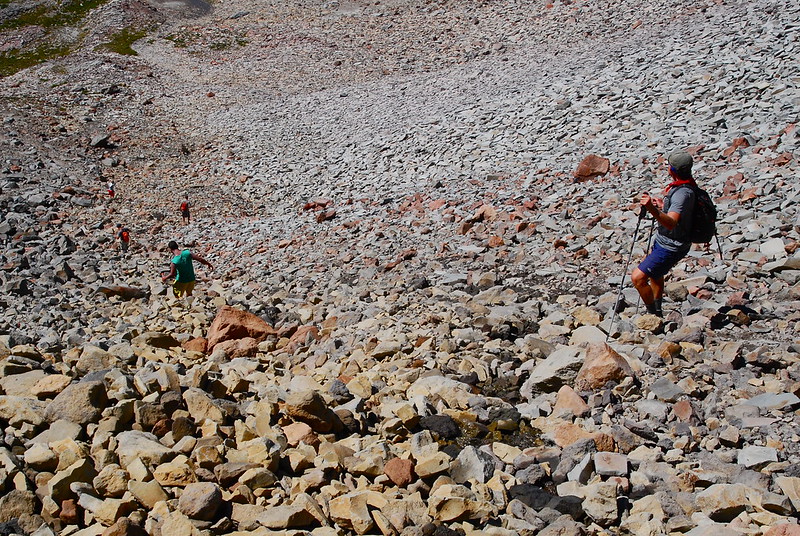 Back at the lake, we all jump in for a quick dip before the hike out. “Can you see my feet?” 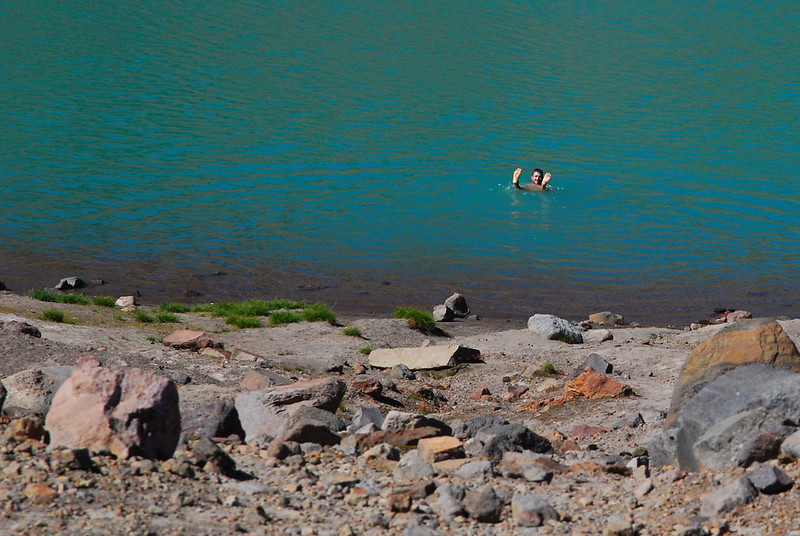 We leave camp around five, trundle down the Lily Basin and Snowgrass Trails, and, after a few navigational mishaps, get to the car a bit before nine. By the time we get down to Packwood, a lot of the restaurants have closed, but we get great takeout at Cruisers Pizza. (Is it actually great, or am I just hungry? I have no idea.) Then all that’s left is the long, sleepy drive home.