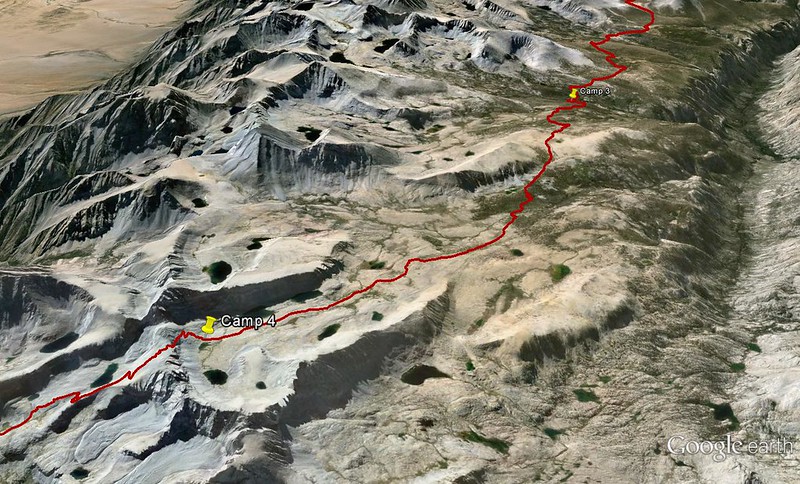 We both wake up feeling wonderfully, and scurry out of the tent, into the frosty morning. We’re getting good at this. I change into my hiking clothes outside, go and fetch the bear barrels, take out the day’s food and put it in the top of my pack. It’s all starting to become rote.

The smoke’s gone, and as we walk down to the main trail, we can see the Great Western Divide stretching to the west. 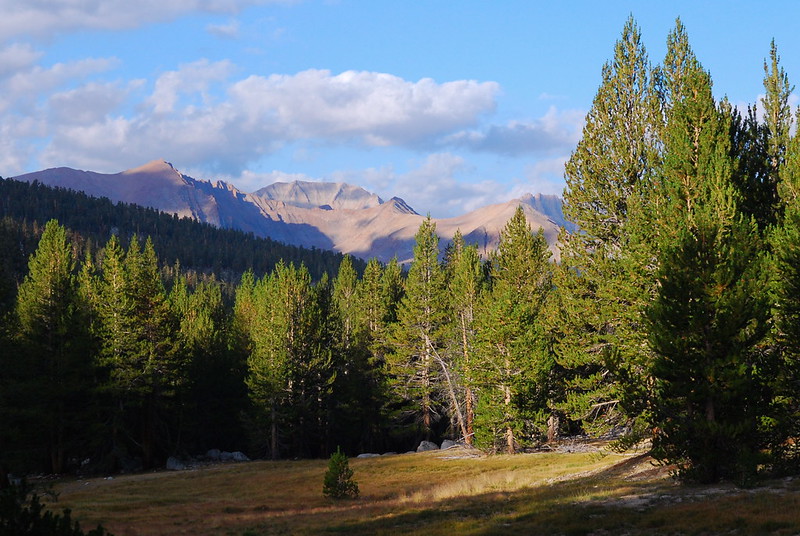 The day begins with a small climb – just a few hundred feet – to a smooth granite table overlooking the Wallace Creek drainage. The world spreads out to the west, and I’m here first, just staring. It’s the biggest thing I’ve ever seen. 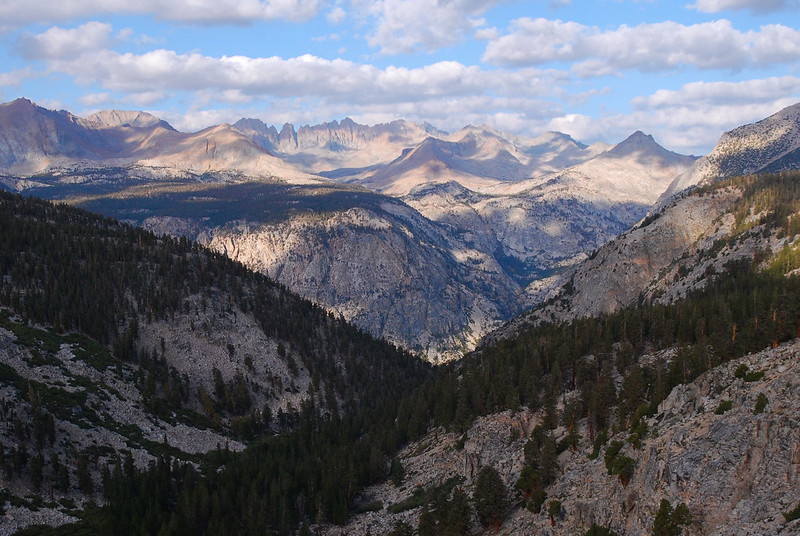 We follow the trail back into the woods, and stop for breakfast at Wright Creek, a thick, fast, shallow ribbon of water rushing through the forest. As we sit precariously on a boulder drinking coffee, a couple of southbound girls shamble quickly toward us, smiling and talking brightly to each other about nothing. They’re moving so fast, almost running. They’ve got dirt on their hands and legs and arms and faces. Dirty trucker caps, holes in the toes of their trail runners. They’re wonderful, and as we shout our hellos and wave from thirty feet away, I notice the gathering grime on my fingers.

From the creek, there’s a sandy steep climb toward the Bighorn Plateau. I’m always fast in the mornings – something about proximity to coffee – and I feel like I’m running on air. The altitude’s not hitting me today. Neither are the jagged rocks in the trail. It’s so beautiful, and the beauty’s somehow seeping into me, blending with my small aches and pains and turning them into something else.

The sky’s so big here. The world comes from every corner and touches us, small specks overshadowed by the clouds and mountains, even the trees and the rocks. 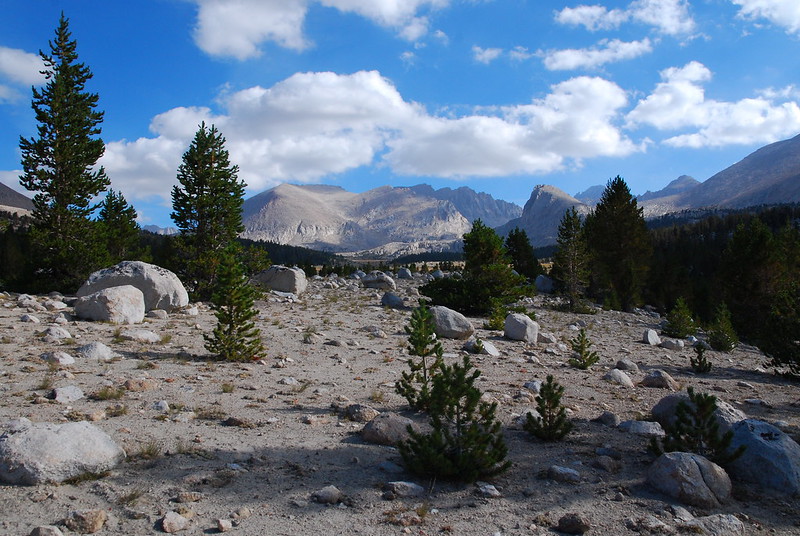 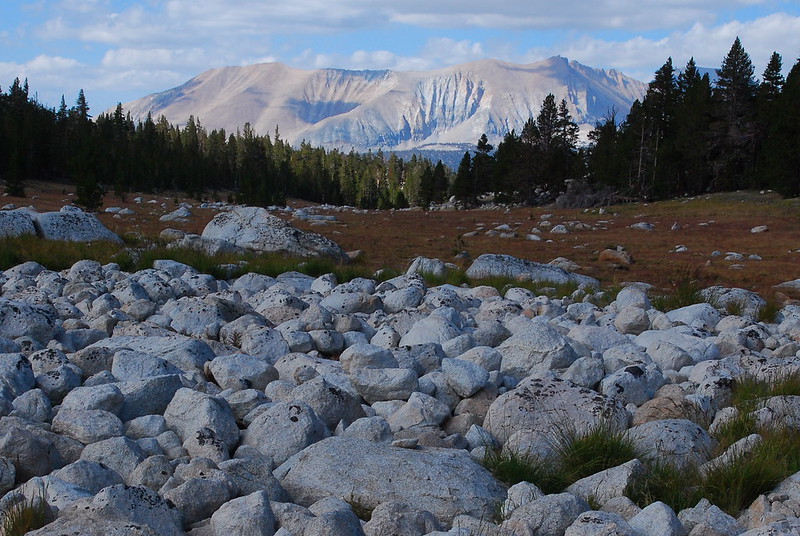 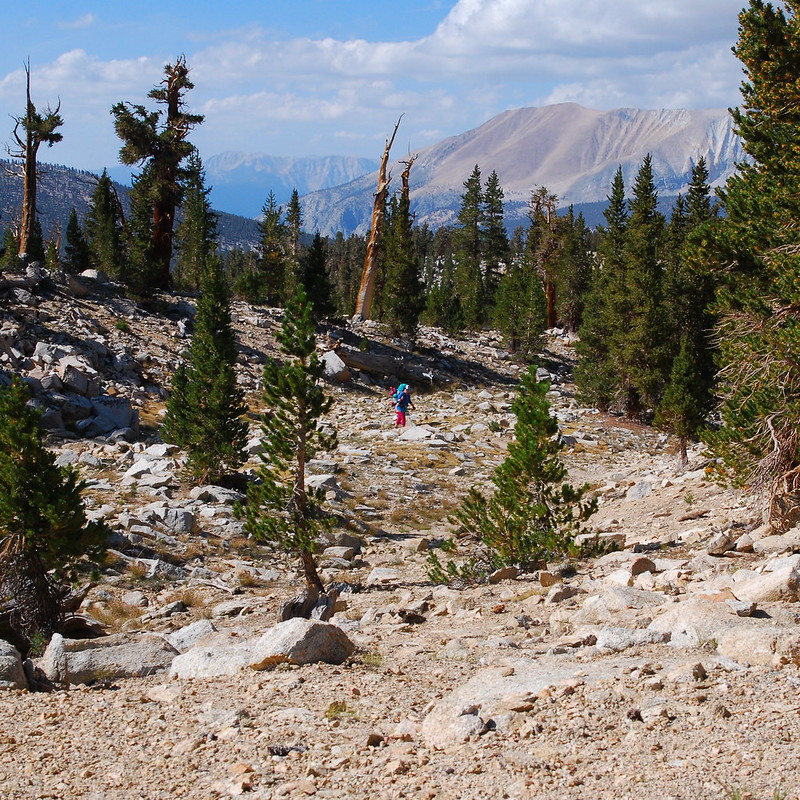 For now, though, all the ridges seem impossibly far away, and we meander through the plateau, straining our eyes to see its edges. 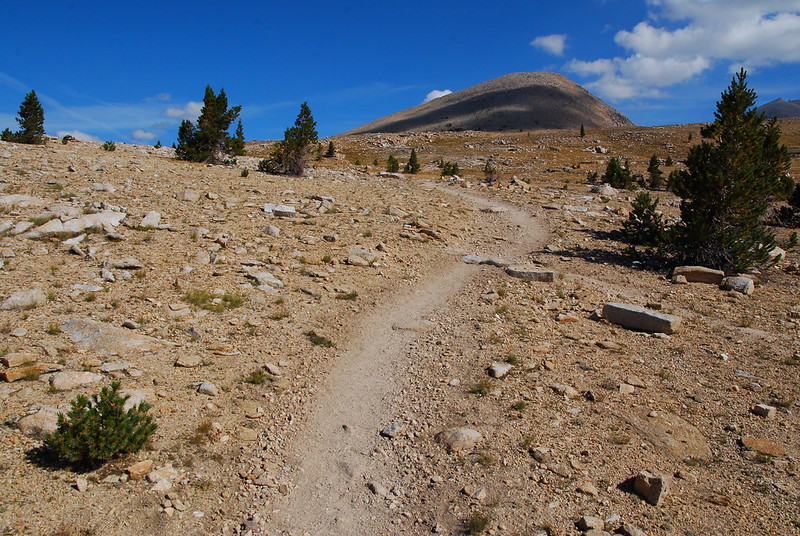 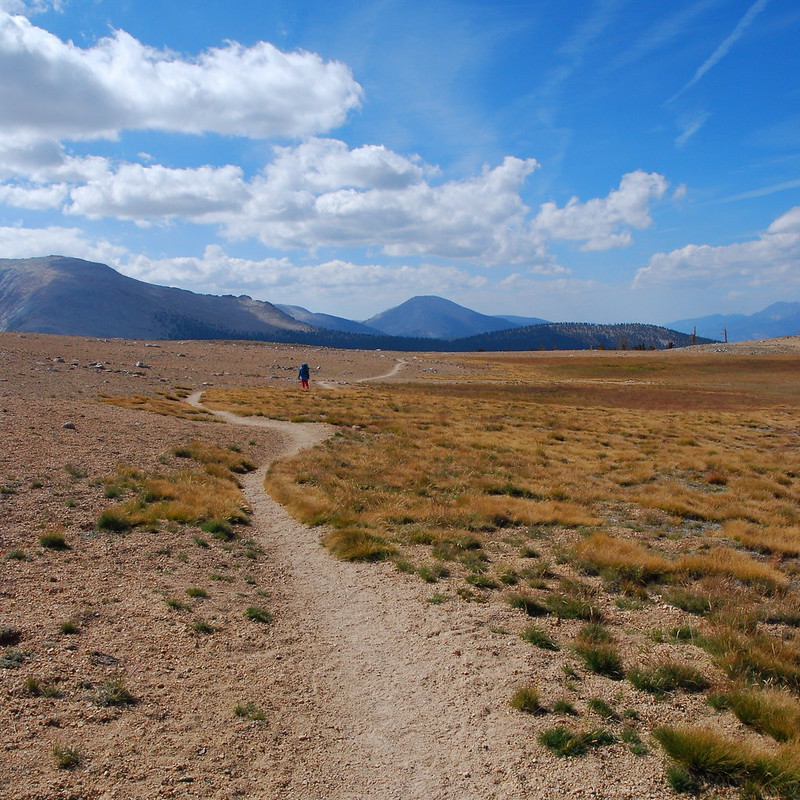 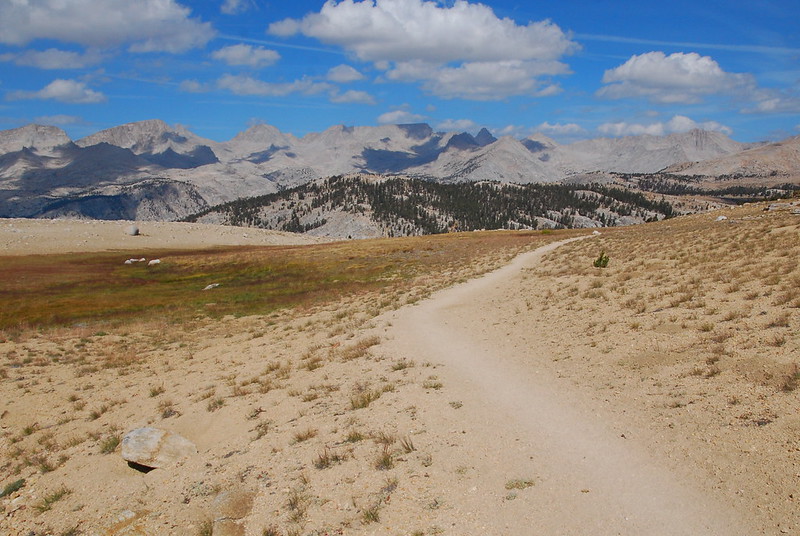 On top, there’s a shallow pond – just a few feet deep, but as clear as anything I’ve ever seen. Peering over it, at the western divide, one could almost mistake it for an ocean.

On the far northern side of the plateau, there’s a small clump of trees, the first we’ve seen in a while. We stop to enjoy the shade and a snack. Snickers! 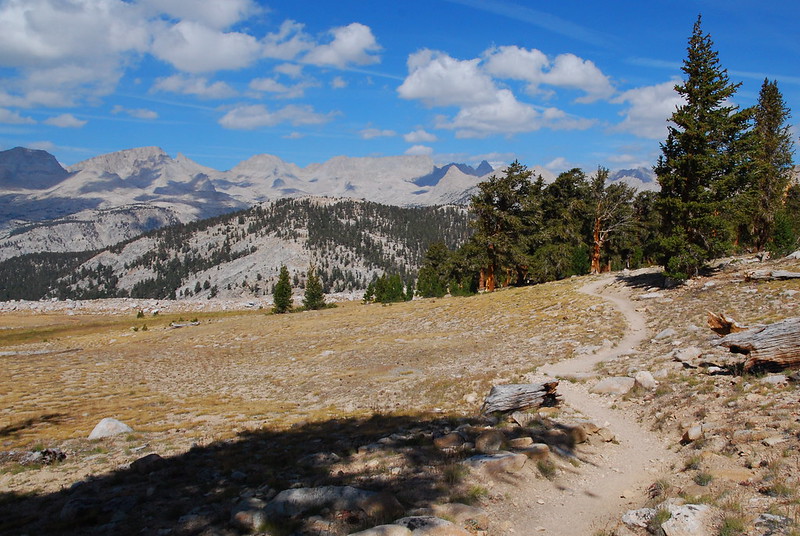 A few minutes in, we’re joined by a couple of affable Australian guys, who, luckily for them, have just missed a rather titillating (or, more probably: horrifying) Body Glide routine I’ve been working on for the last few days.

We chat for a while, and they tell us that the nice thing about being Australian is that you don’t know what American plants are poisonous, and so you just go around eating whatever. Earlier in the trip they apparently ate a very large mushroom, which may or may not have been poisonous, and just a few days ago they cooked a small fish they’d caught in some butter from the hiker bins at Muir Trail Ranch, which may have actually been skin lotion. I instantly, and unreservedly, like them.

Their current problem is that, although they’ve got fixings for some scrambled eggs (!?), they’re desperately in need of a pint of cream. As they’re leaving, they ask, in all seriousness, if we have one to spare. I tell them we’re fresh out.

From the plateau, we descend a few hundred feet to Tyndall Creek, an unexpectedly gorgeous stream gushing over smooth granite from an unseen lake to the northeast. We take another break, lie on the stream’s grassy bank. 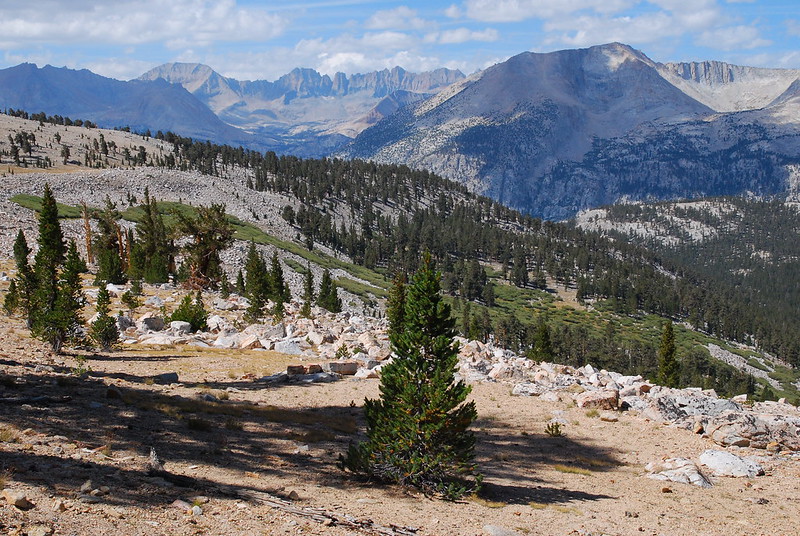 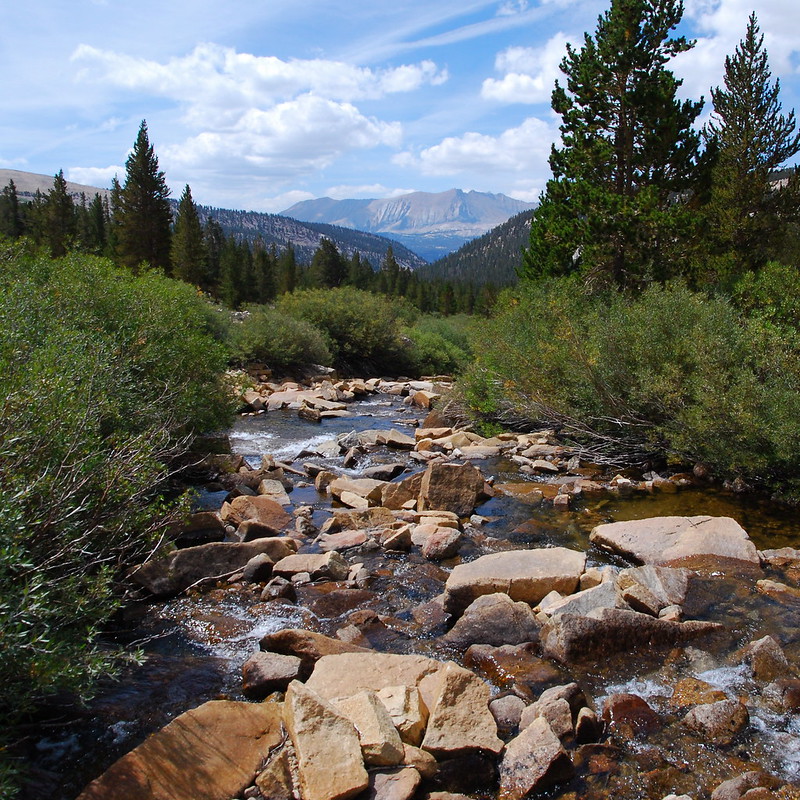 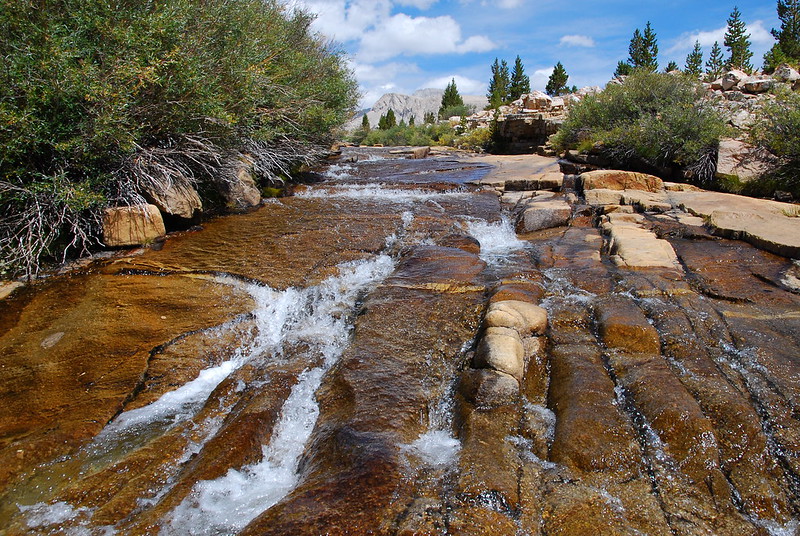 I’m going to end up saying this sort of thing a lot, but the area between Tyndall Creek and Forester Pass is one of my favorites. It’s starting to get hot, but the sun shimmers off the hills, which fold in toward us as we approach Forester Pass. 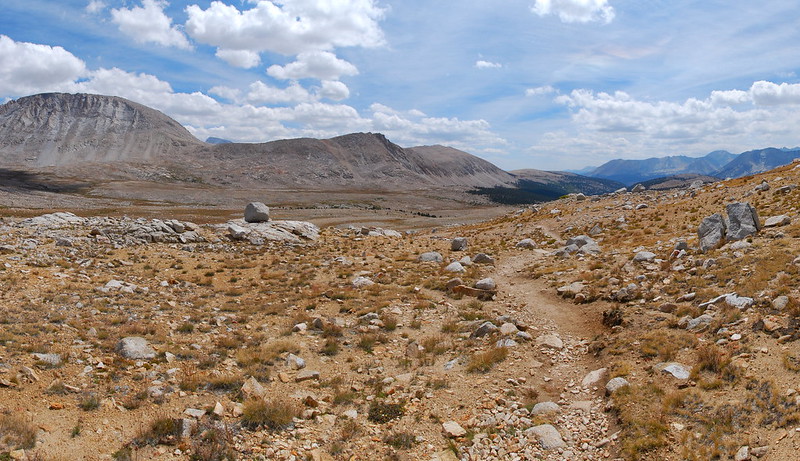 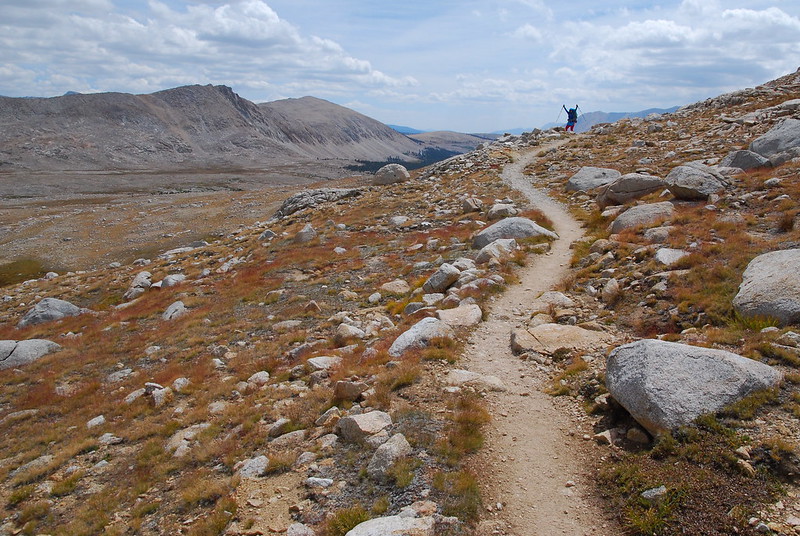 Nice to have water, though: 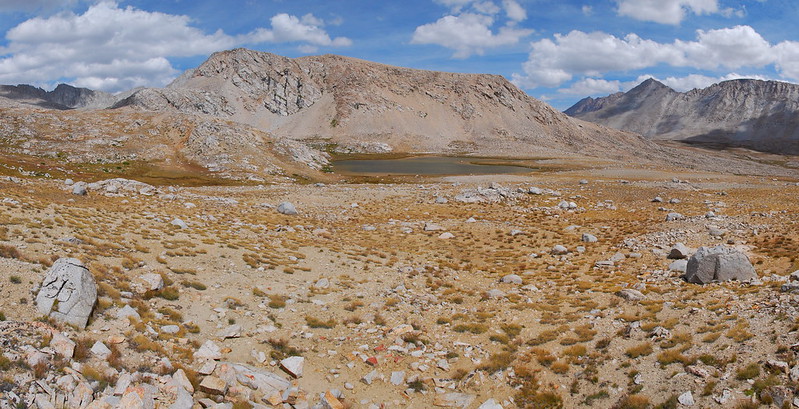 We have lunch at a creek, one of many running parallel and crisscrossing in the meadows below Forester. Beans again, but this time heated up, with something like six liters of olive oil, and Taco Seasoning all around. It’s delicious.

Continuing on, I start to play a game with the photos, hiding Krista somewhere and seeing if I can find her a moment later. I don’t want to talk about my final score. 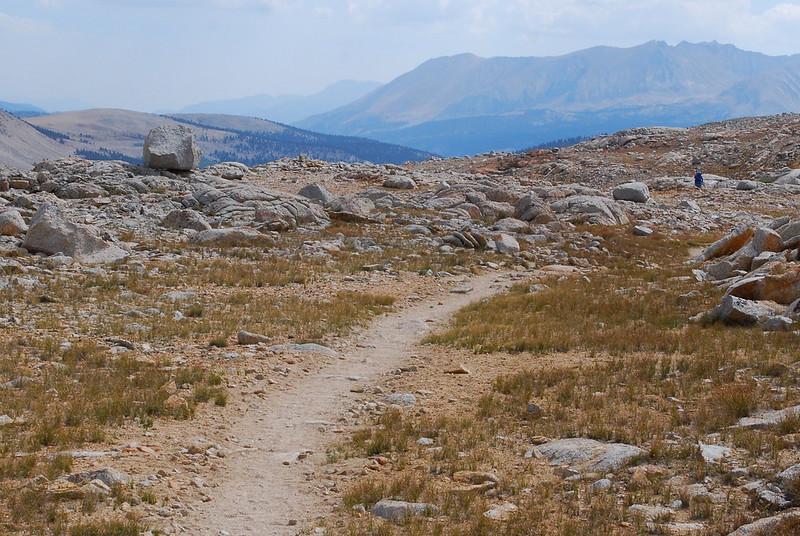 Okay, this is an easy one: 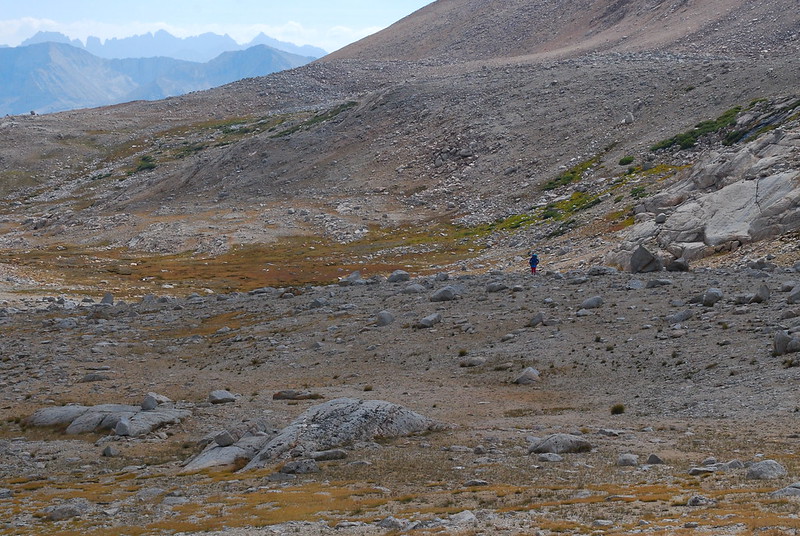 Below Forester, in the nook just south of where the Great Western Divide folds into the Sierra, there’s a series of increasingly surreal lakes placed haphazardly among the rocks. 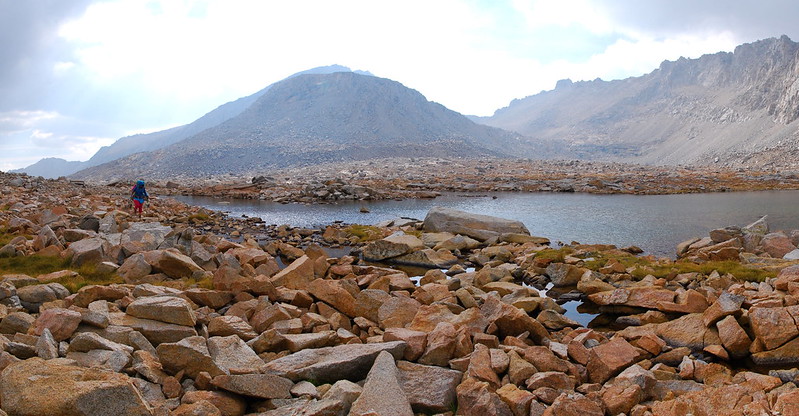 The funny thing about approaching Forester from the south is that, until you’re on it, it seems absolutely impossible that anyone could ever build a pass there.

Guide for the Perplexed: it’s that little notch in the upper middle. 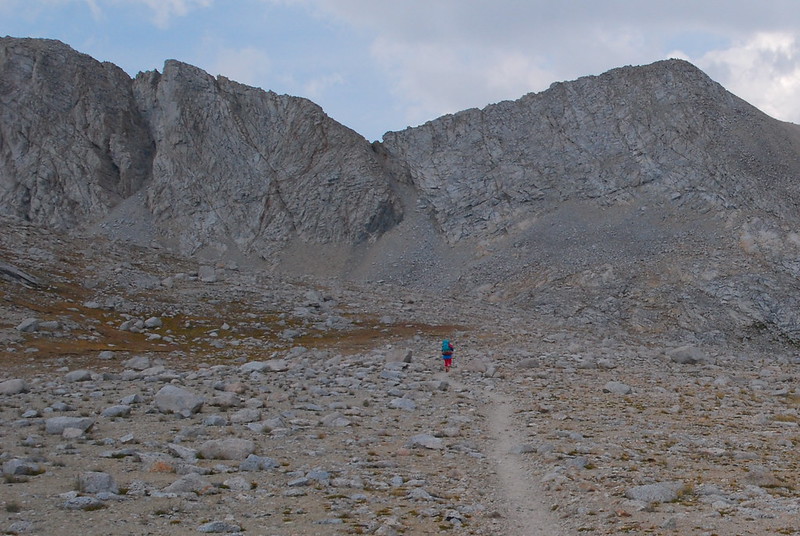 We stop at the last lake before the pass, in a small clearing just flat enough for our tent. It’s painfully beautiful. 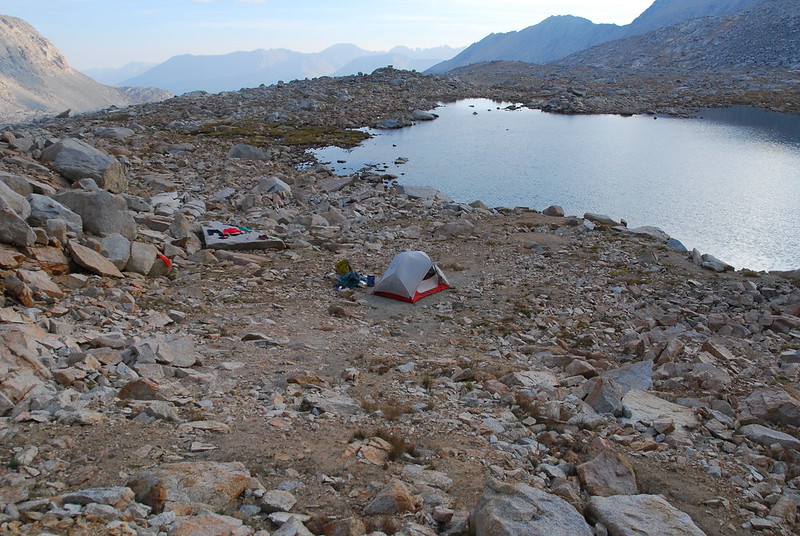 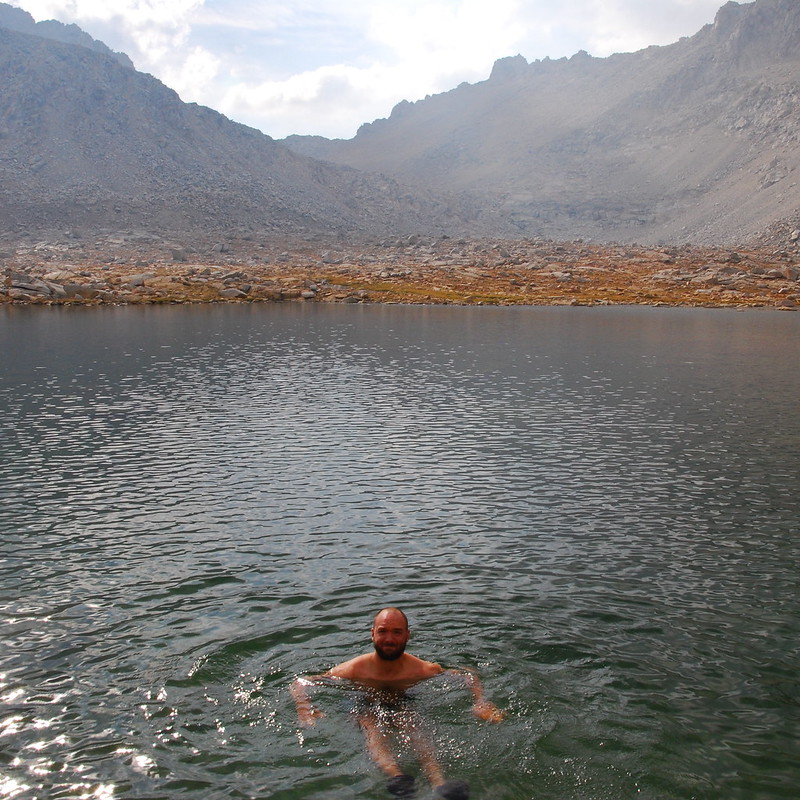 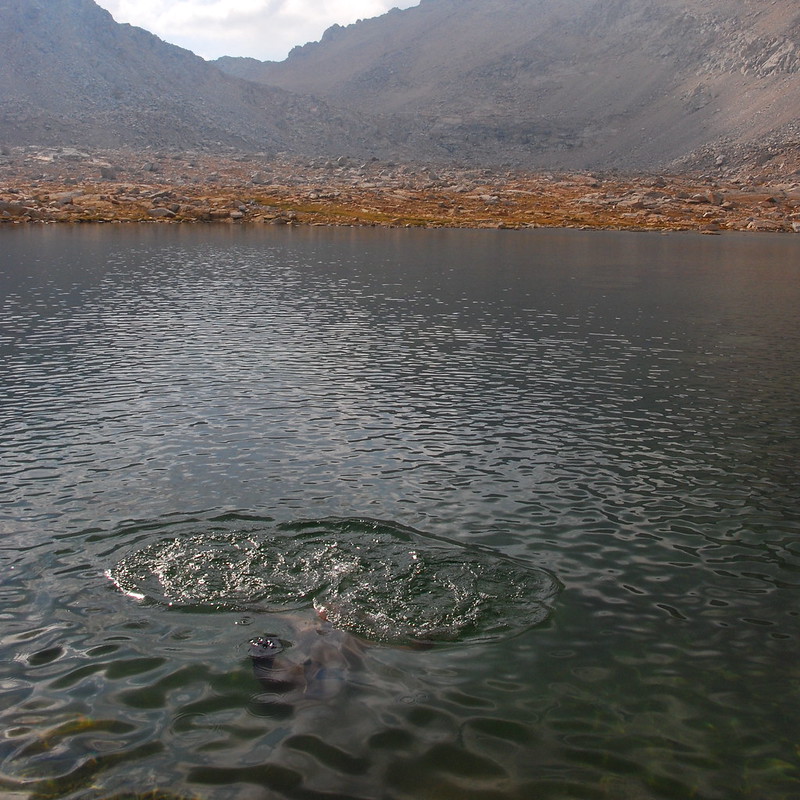 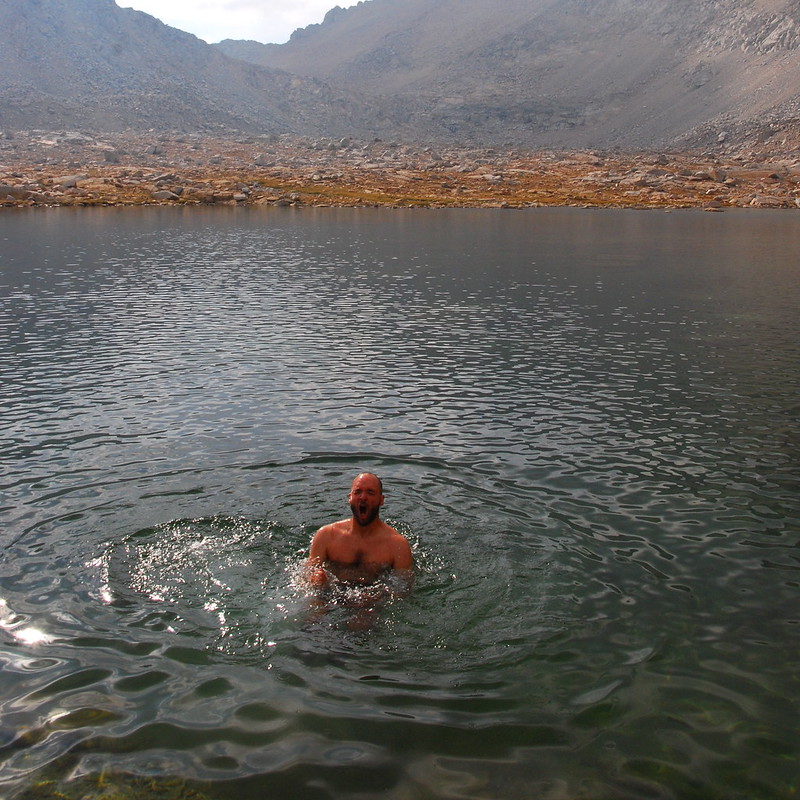 It takes a while to thaw things out, but the glaciers surrounding my arms and legs eventually retreat, and we sit among the laughing pikas, eating dinner. It tastes better than anything I’ve ever eaten.

The thing about thru-hiking that we’re starting to learn is that everything is fleeting. Because we’re always moving forward, we get to see it all just once. Just one breakfast at Wright Creek, just one sunset under Forester Pass. We may never be here again. It makes it all seem so impossibly dear. 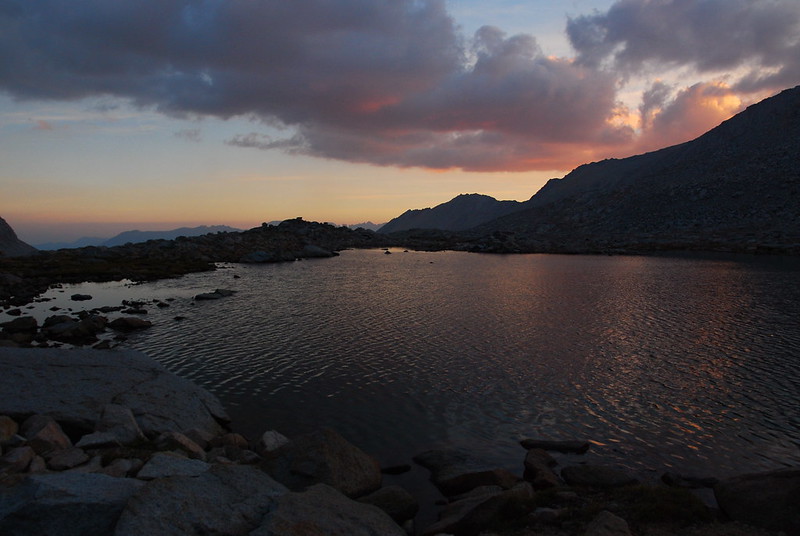