August 30, 2015
Bullfrog Lake to Onion Valley and Independence
A bunch of miles on the Bullfrog Lake and Kearsarge Pass Trails 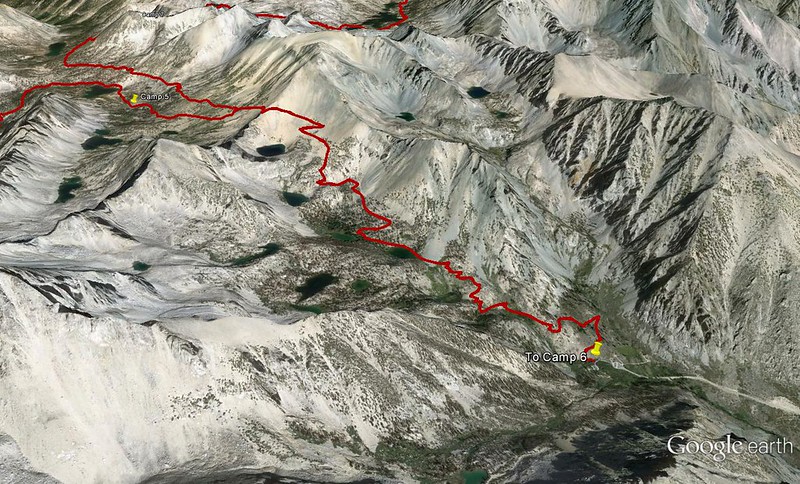 We’ve arranged a ride from the Onion Valley Trail into Independence at one, so we wake up early, just to make sure we can get there even if something happens. The smoke’s completely cleared, and, as we begin to shamble up toward Kearsarge Pass, we get wonderful views of the Kearsarge Lakes, just east of Bullfrog. We couldn’t see them at all last night. 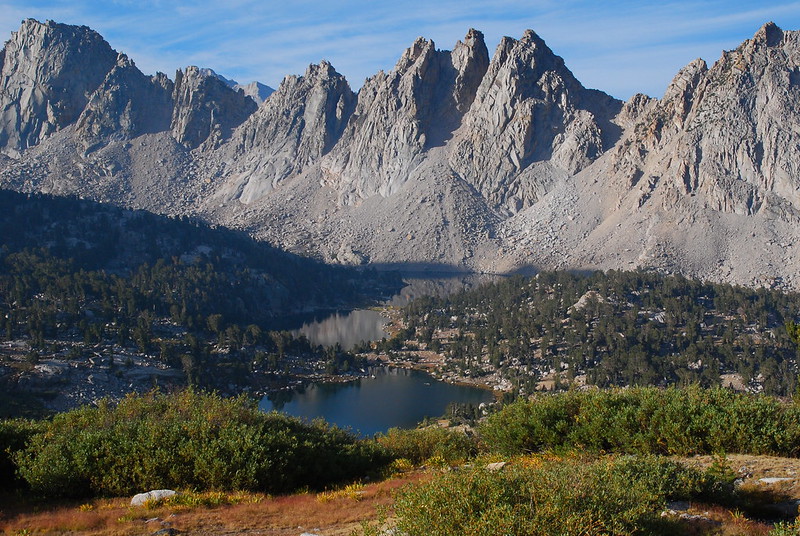 Kearsarge Pass is, like Forester, daunting from far away, but actually pretty nice once you’re on it. 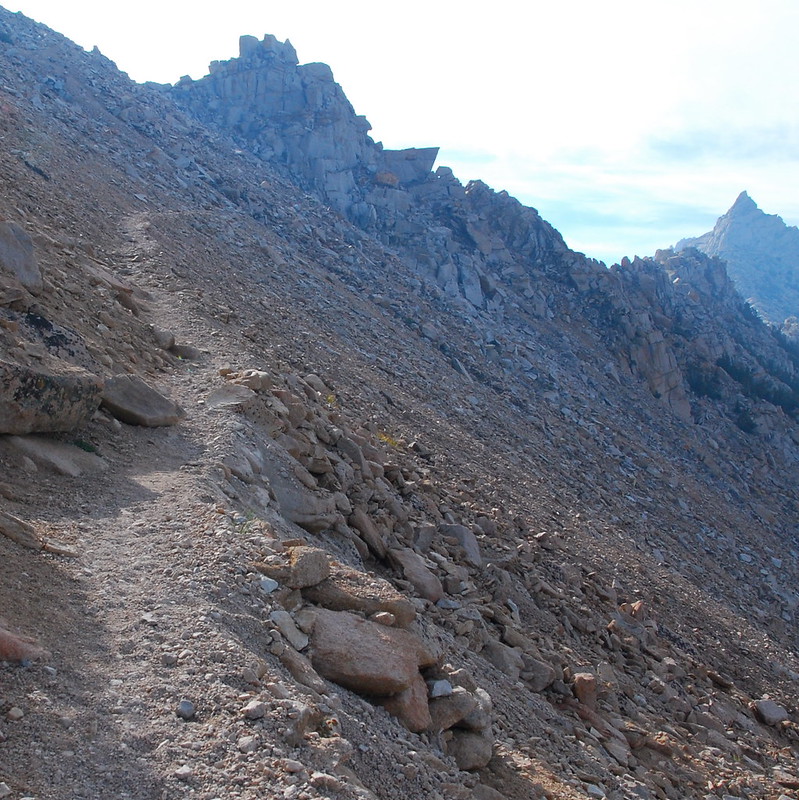 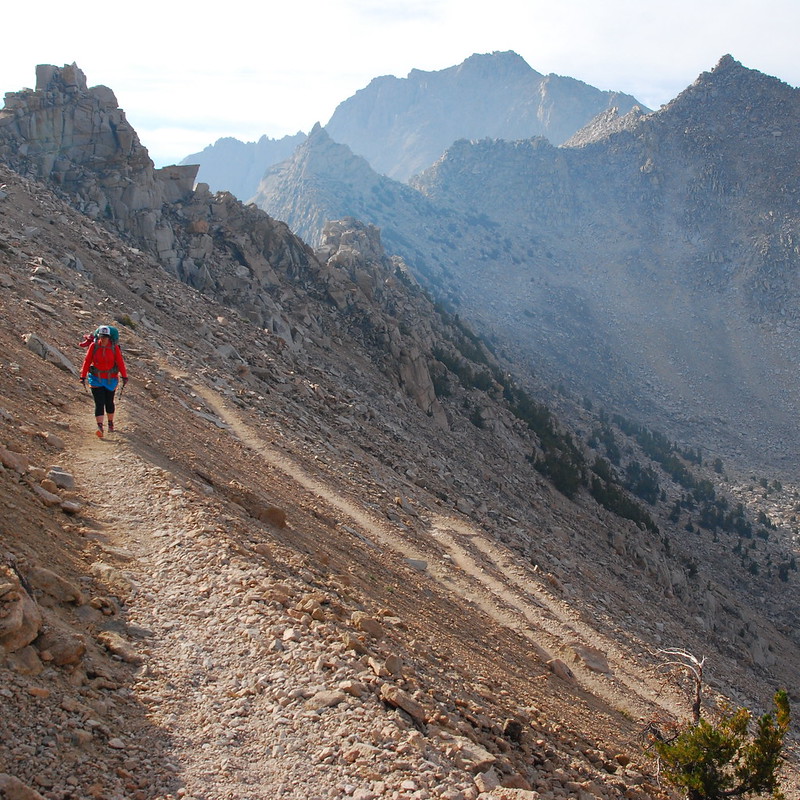 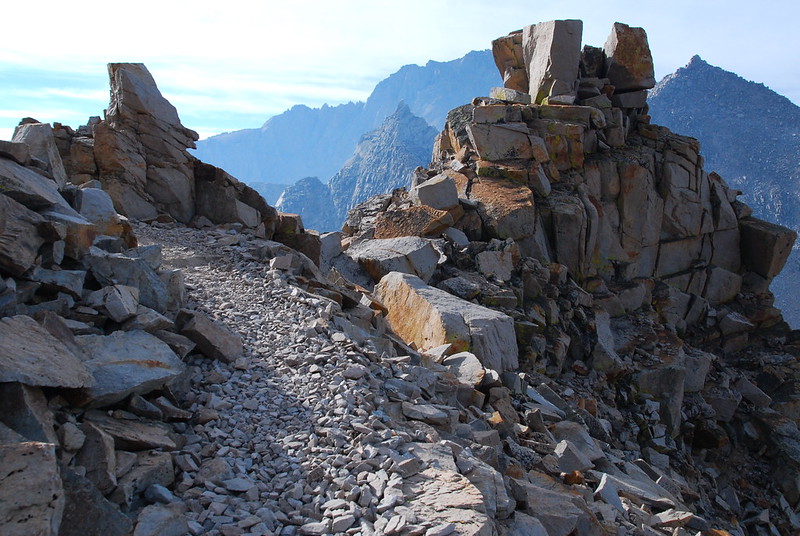 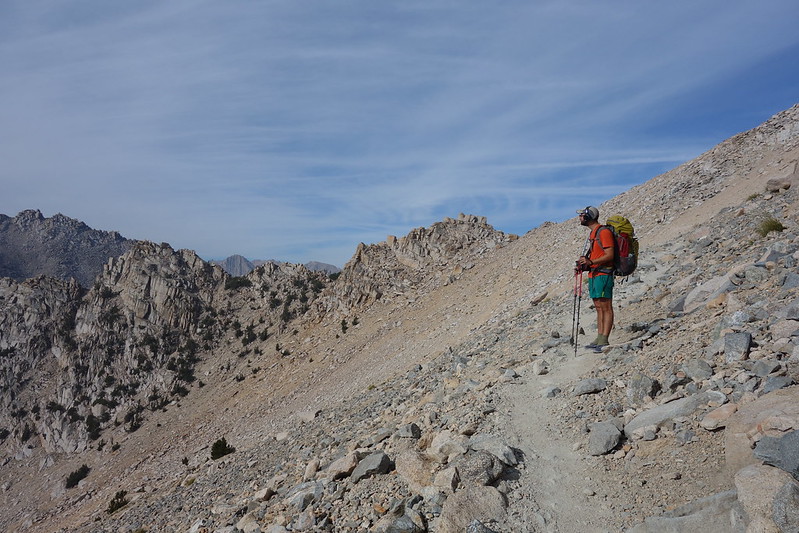 As soon as we make it over the pass, we see Independence, completely covered by a thick layer of smoke. There’s none where we came from. Weird.

We descend down all the same, and make it to the trailhead with a couple hours to spare. We sit in a no parking section of the Onion Valley Campground parking lot, making breakfast and drinking tons and tons of (free! potable!) water for the next couple hours, feeling feral among the weekend warriors.

Eventually, our ride – a thin, tan, immensely likable guy from the Mt. Williamson Motel – shows up, bearing a couple of tangerines he’s picked himself to give to us for the ride down. We load into his truck, which is already full of tools and painting supplies, and sputter down toward Independence.

We talk, inevitably, about the fires. I mention the fires in northern Washington, and our new friend breathes in sharply. “Yea, I hear an apple packing plant burned…” He pauses to take a tight corner, then continues “…with millions of apples inside.” He’s right, but it seems like a weirdly specific thing to focus on. Then I look down at the tangerine peel that I’m still holding. Oh.

We’re scheduled to spend the night at the Williamson Motel, which is run by Strider, a wonderful woman who hiked the PCT a while back, and now runs the place as a hiker-friendly basecamp for people doing the JMT or PCT. It’s probably the nicest hotel – hell: probably the nicest customer service – experience I’ve ever had. When we get there, she offers us beer or iced tea and does our laundry. Our resupply bucket’s already in our room.

As we’re checking in, she pulls Krista aside, and asks her if she’s read The Lord of the Rings. She has. “Then you know about Strider and the Seeing Stone?” She has. Strider – our Strider – is talking about the palantíri, stones that, in the books, allow people to communicate over long distances, and to see what’s happening in distant parts of the world.

Our Strider’s got her own palantíri – quartz necklaces she gives to female thru-hikers, to form their own fellowship. She asks Krista to pick one, then puts it around her neck, in a sort of ceremony that seems too intimate for me to be watching. But it’s so, so wonderful to watch. I think of the guys a few days ago, talking down to Krista. Our Strider’s got to know about that shit, and here she is, giving all the women who pass through here quartz necklaces, inducting them into their own fellowship.

Krista doesn’t take it off for the whole trip.

When we get to our room, there’s a framed poster on the wall showing a dozen different types of apples, each with a Latin name and short description. Strider’s family, it turns out, owned an orchard in Washington when she was growing up.

The only downside about Independence is that there’s not a lot there: a Subway, a couple gas stations, a burrito cart that’s closed today, and an apparently pretty good French restaurant where you’ll apparently also wait anywhere between one and three hours for your food. We just kinda feel like relaxing on the couch, so we get lunch from the Subway.

The place is empty when we get there, apart from a single surly teenager working behind the counter. I order a meatball sub – I know, I know, but it’s been a week since I had anything substantial – and he grimaces. “I don’t think you want that.” But then he checks the meatballs. “You know, they’re actually looking pretty good today.”

I don’t think I’ve ever seen anyone caring about their job less than this guy, and I love him for it. Waiting for our subs to toast, Krista and I talk uncertainly about the new Lays “Biscuits and Gravy” potato chips. The package looks ominous. “Open it.” What? Our friend tells us to open it again. “Do it. Just do it. You won’t regret it.” I look uncertainly at Krista, but she’s already ripping the bag open.

We don’t regret it. They’re amazing.

We both get meals. When we ask what size sodas to take, our buddy tells us that he doesn’t care. “I honestly don’t give a fuck.” Dude definitely knows what he’s about.

We saunter uncertainly into the supermarket, looking for a few things to fill out our resupply. There’s an excellent selection of beer and a pretty good selection of boxed thanksgiving stuffing, but otherwise the shelves are full of holes. Especially in the potato chip aisle. I notice they’re fresh out of Biscuits and Gravy Lays.

We do though find the freeze dried mashed potatoes – the place is practically a freeze dried potato emporium – and two lone packets of taco seasoning, stashed, for some reason, just across from the fingernail clippers, a pair of which we also buy. Not a bad haul, all things considered. 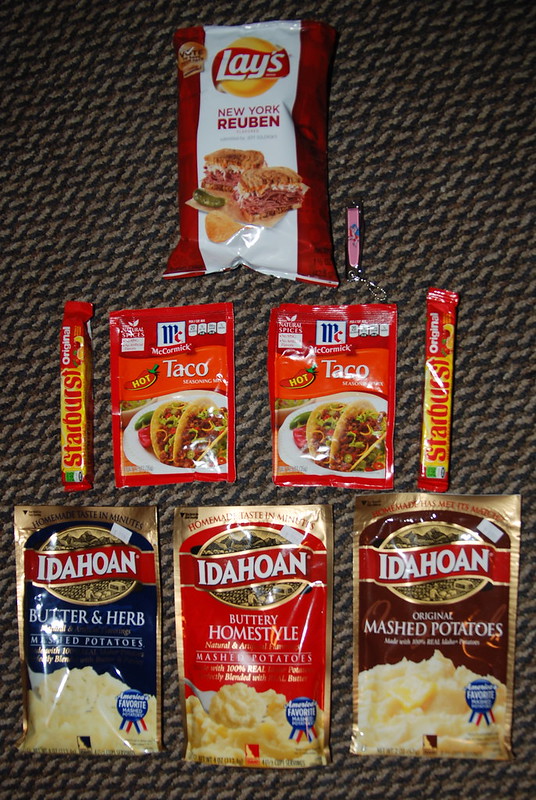 We walk back on the now sweltering sidewalk to our room, where we spend the rest of the afternoon watching old reruns of Chopped, which, for some reason, all seem to feature child chefs. One makes this bright blue jello stir fry thing. I find myself thinking that it looks pretty good, then think that it’s probably time for dinner.

I’m not sure I can brave the Subway again, so I walk to a gas station, which has a magnificent collection of frozen pizzas. Seriously: they take up an entire wall, and half of another. They must have at least one frozen pizza for each man, woman, and child in Independence. I buy two, but seriously consider buying an order of magnitude more.

Back in our room, we heat our pizzas in our sketchy stove, stuff our clean laundry and new food into our packs, and turn in early, excited to sleep in a real bed.

One thought on “JMT, Day 6: Gas Station Pizza and Other Delights”