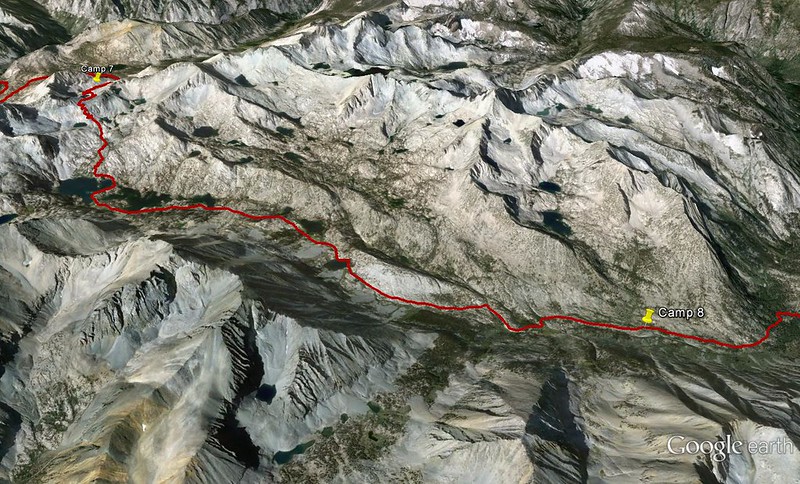 I wake up to the sound of a pika chirp-shrieking in the distance, a reliable alpine alarm clock. It is blindingly bright in the tent; the sun is fully up and Robin and I have slept in later this morning than we have the whole trip so far. When we fell asleep, it was with certainty in our hearts that we’d be exiting the trail today and becoming two more notches on the smoke’s list of the defeated, something neither of us were eager to get an early jump on.

I lay on my back looking at the sharp line of the sun stretching across the tent’s ceiling and think about many things, a quiet cacophony of overlapping worries : how small my lungs feel today, how we’ll get a ride from the next obscure trailhead back to Independence, how it will feel on the shuttle back to the car having only made it a week into the trip we’d planned for two years, how to explain to everyone why we had to stop, how to patch the hole in my heart caused by having cut this experience short.

Last night the air was a soup of ash and smoke, the sun a sickly flat orange disk barely visible at midday. I know we’re a ways up Glen Pass, but I couldn’t describe the terrain if my life depended on it; the visibility had been nil the whole way up. I roll over and grab the tent zipper, slowly pulling it back to assess the situation.

There is a scene in “Charlie and the Chocolate Factory” where Charlie is holding the candy bar in his hand. It’s his last chocolate bar, his hope already depleted. He gingerly tears the corner and slides his thumb under the wrapper with painful care, not breathing. Charlie spies the first glint of the golden ticket, then shreds the rest of the wrapper away with abandon as he reveals his prize. This is the scene in the tent, but instead of a golden ticket, I spy a shard of crystal blue sky beyond the rain fly.

My torso tumbles half out of the tent. Unbelievable. The smoke is completely gone, not a wisp to be seen. The granite canyon walls flanking us appear in high definition after yesterday’s muck, chiseled and textured in jagged shadows and bright highlights. They were obscured yesterday, as were the trees, mountains in the valley behind us, and the pass ahead. It is all breathtaking.

This turn of events changes everything. Last night’s certainty about the impossibility of continuing is now riddled with holes.

We discuss our options while we pack up, running through all the “what ifs” we can think of. There are two lateral trails we’ll pass today that offer escape routes back to civilization. Beyond those, it’s a bit of a point of no return for 40-50 miles, and ahead is LaConte Canyon, which we’ve heard reports of being the heaviest areas for smoke. What if we stay on the trail and the smoke comes back as bad as it was yesterday?  What if that was the worst it was going to be, and we leave the trail when it would have been fine? If we do leave, what if there’s no one to give us a ride at the lesser traveled Baxter Pass Trailhead? Back and forth, back and forth. I can talk myself into it either way. For once, my gut is silent.

Robin, presumably still spooked from my asthma event the day before, is very  quiet on the matter and tells me that the decision is 100% mine and he supports whatever I want to do. We have to go six miles to get to the next lateral trail out, so I’ve got some time to make up my mind.

Glen Pass is gorgeous, an efficient route from the south with its sharp hairpin switchbacks that waste no time gaining elevation. My lungs don’t feel amazing; I’m coughing a lot and moving slow. I try and fail not to get frustrated with myself.

Up and over the top we see the Rae Lakes stretched out in the distance where we’re headed, sapphire blue pools studding the rocky terrain. The sky is still clear and cloud-free, only amplifying the intensity of the water’s color.

Near the top, we run into a young woman in her late teens who is Northbound, alone. She’s ahead of schedule and keeps “accidentally going too fast.” I wish I had that problem!

We stop for a very late breakfast at Rae Lakes, pausing to cook our oatmeal on a needle of a land bridge spanning the middle. I talk through the same logistical what-ifs about leaving the trail at an unfamiliar place as though repeating them for the twelfth time will somehow yield new results. Due to our late start, it’s around noon and we can see smoke starting to blow towards us from where we’re headed. It’s only a mild blue haze, nothing like yesterday, but it still makes me nervous. What to do?

In the distance, I see what I have been dreading all day: the Baxter Pass sign. I’m not any closer to making a decision than I have been all day. I curse the dinged up wooden sign and trudge forward, pausing when I reach the fork. The JMT stretches ahead of me, sloping down the canyon as we followed the South Fork of Woods Creek. To my right, the Baxter Pass trail headed towards the mountains that would spit us out near Independence, 22 miles away. The anemic trail is thin, overgrown, and disappears into the landscape not 20 feet from where we stand; the way out would not be easy, but the way ahead was uncertain.

The smoke is the same blue haze it had been all day; not bad, not great, but manageable.

“What if we keep going?” I hear myself ask out loud. “What if we get up insanely early, sub-dawn, and hike until the smoke comes in, then stop as soon as it gets too heavy?” We estimate miles and how far we could make it per day on the new plan and it seems doable. Robin asks about my asthma, still concerned, but as long as we can manipulate the miles so I’m not climbing in the smoke, I should be ok. We decide to do the passes early in the morning, then set ourselves up for flat or downhill in the afternoons. It just might work.

We take a last look down Baxter Pass, the turn to continue north along the JMT. I am giddy. I’m still not sure this is a good idea, but I can’t quit the trail knowing we didn’t try absolutely everything to outsmart the smoke. Not even outsmart, really: accepting it and working with it instead of fighting against it.

We cruise along Woods Creek for the rest of the afternoon with spirits lifted, but as we descend lower the smoke starts picking up. I have my handkerchief over my face to filter the air, but I’m starting to get woozy from the smoke so we start hunting for a place to plop down for the night. The sun is lowering and casting an intense golden light on the canyon wall to our right. Woods Creek is about 40′ below us down a drop off, and I peer over the edge when I spy a tawny doe grazing below. She sees us, then a spotted fawn appears next to her. Then we see another doe, and her fawn. A third doe is grazing further down the creek with her baby. We all regard each other for awhile, then continue on our respective ways.

“We would have missed that if we’d gone home,” I note. Robin hugs me and we continue looking for a spot to camp.

Not much further, we find a spot between the tail and Woods Creek where a smaller stream was rushing downhill through some aspens to join the larger body of water below. There is a perfect sitting rock where we set up to cook dinner that affords a dramatic view of Woods Creek crashing along below. We enjoy the dinner of champions: macaroni and cheese with pepperoni, and gummy bears for dessert. We stay out on our perch for a longer time than usual, absorbing our surroundings and being so grateful that we continued. We would have missed it all: the waterfalls, the chat with the older PCT section hikers trying to knock out the California chunk, the ritual of cleaning our truly gross feet in the icy water, the aspen leaves waving and wobbling in the evening breeze.

Nearly losing it all has made me hyper aware of every little thing and I’m still desperately trying to wrap my arms around every smell, sound, and sight, attempting to capture it all as I lay my head down and fall asleep.

Up, Up, Up Glen Pass

Robin at the Pass!

Happy Dance for Staying on the Trail!

One thought on “JMT, Day 8: Decisions”