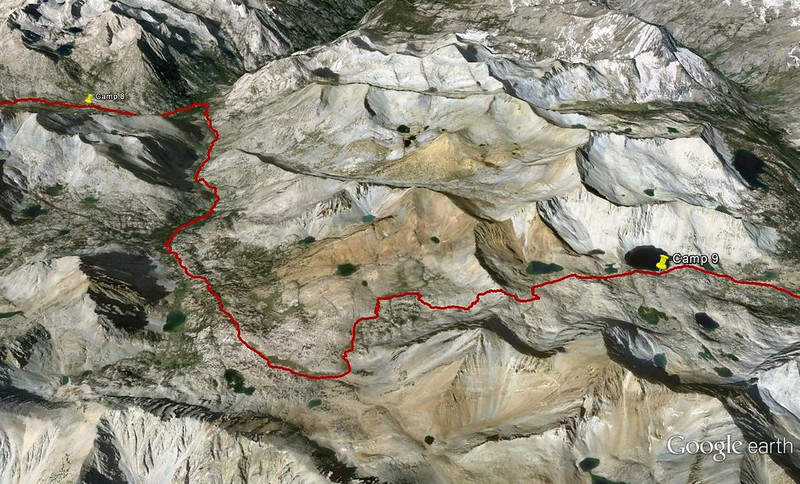 I wake first in the pre-dawn dark to the sound of my alarm. It’s just after five. I unzip the door just wide enough for my head, and peer out. Smoke. But it’s clearer than last night; the stars are just beginning to be visible. “Let’s sleep a little longer.”

My alarm rings again around half an hour later, and now, miraculously, the smoke’s almost gone. Time to hike.

I pull my things out of the tent and wake Krista. We’re camped right next to the trail, but it’s too early for anyone else to be out, and anyway the nearest people are probably a few miles away. I clumsily change outside, hungover from the ups and downs of the last few days. Krista joins me just the sun begins to rise over Baxter Pass – the way out we didn’t take.

The next several days will follow a pattern: we’ll wake up early, get going just as the sun’s rising, and motor until the early afternoon. Then we’ll eat lunch, slow down, and pick our way to camp.

The mornings will always be miraculously clear. This morning, Woods Creek is beautiful in the rising light. 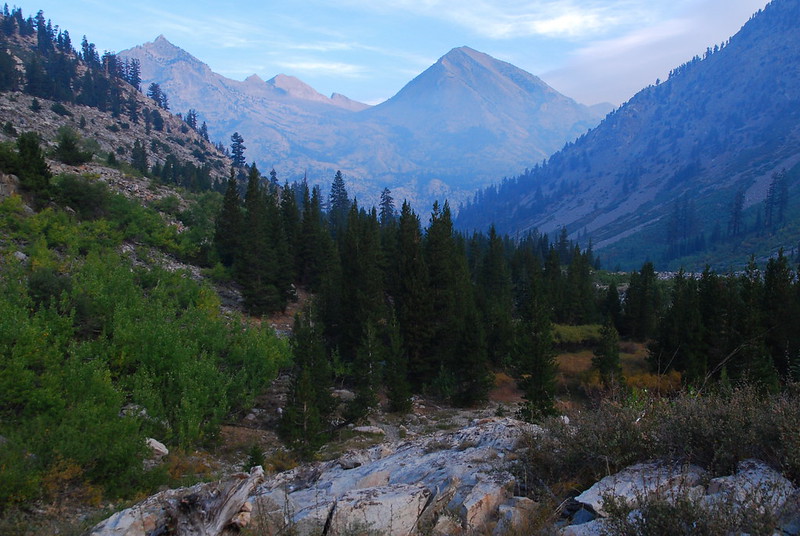 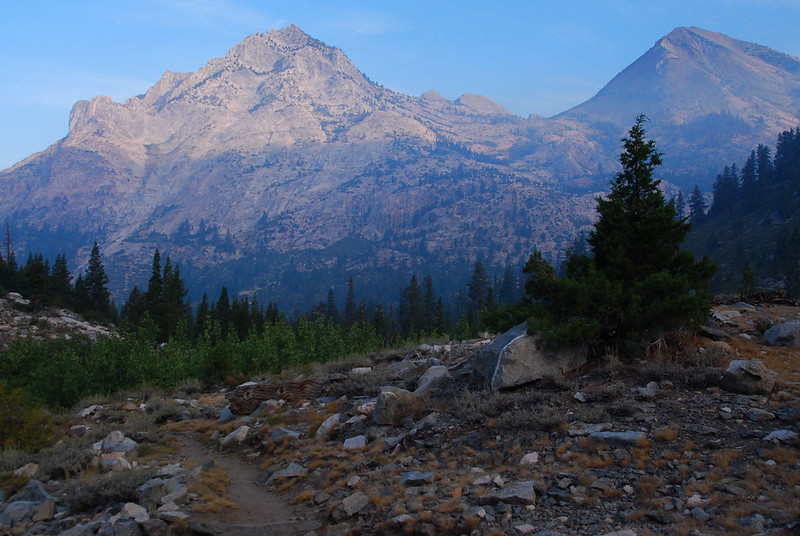 The trail switches back through woods and meadows, roots and rocks, alders quivering in the gentle, cool, clear dawn breeze. We stop for Starbursts in a shallow hollow at the bottom of a steep section of rocky, broken trail. Halfway up a hill to our left, a half dozen deer are making their way down to our creek for breakfast.

After a couple miles, we hit the Woods Creek Suspension Bridge, an improbably ambitious, overbuilt structure spanning what is, for us, little more than a trickling stream. It shakes as we cross, one at a time. 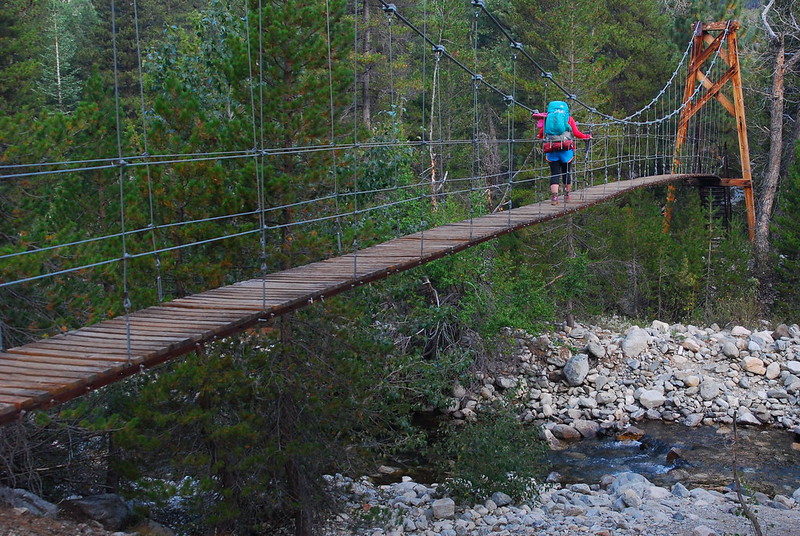 “You sure that’s safe dude?” 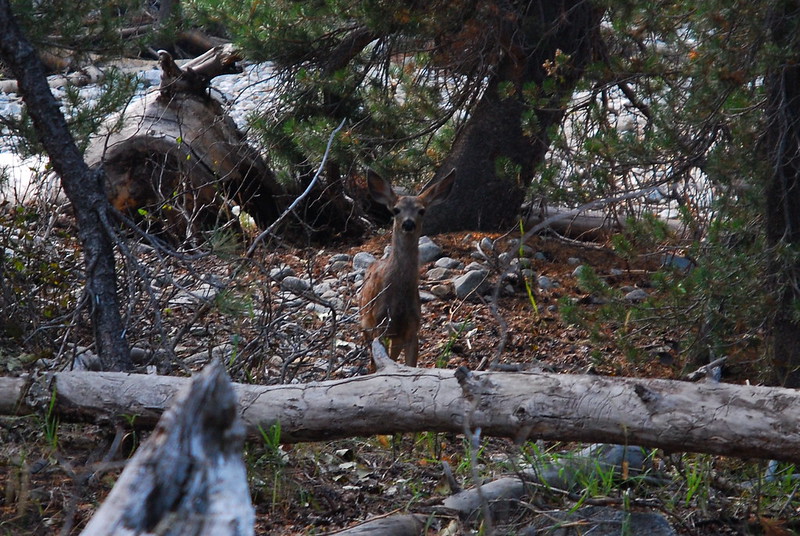 We stop after the bridge, change out of our warm morning clothes, watch another family of deer doddle in the creekside brush. Then it’s a climb up another granite-lined creek – another fork of Woods Creek – toward Pinchot Pass. The moon’s setting in our clear blue sky. It’s painfully beautiful.

We’re surrounded by peaks: behind are Mount Clarence King and King Spur, to our sides the Castle Domes and Widow Peak and Mount Cedric Wright and too much else to name, and in front Crater Mountain, an undulating ridge of cirques. 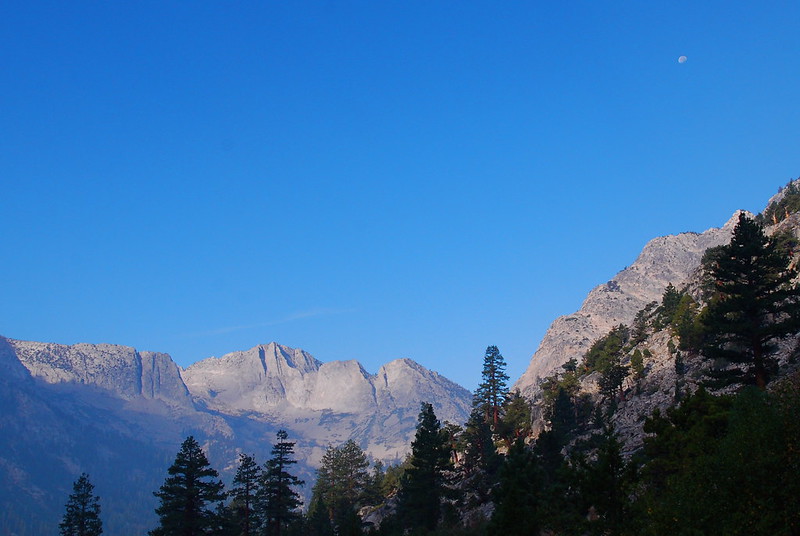 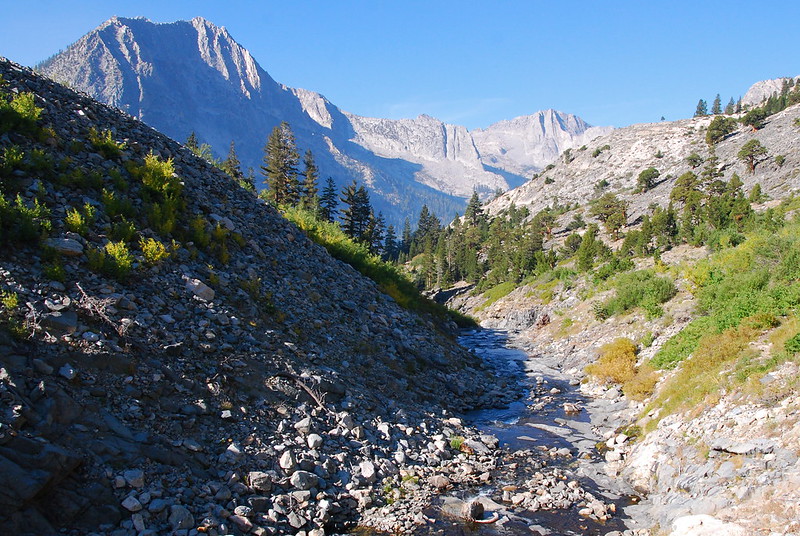 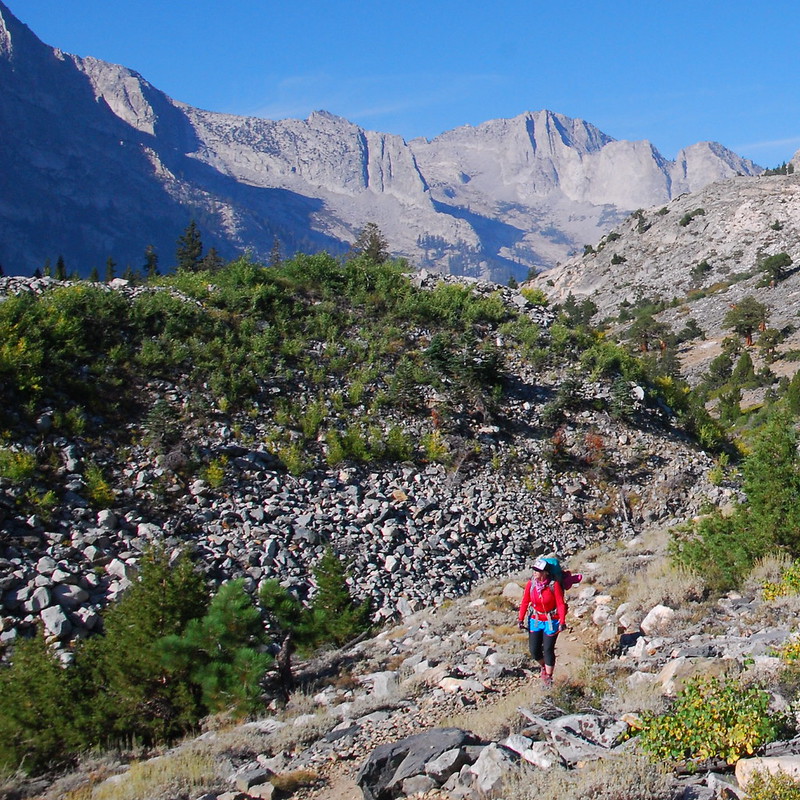 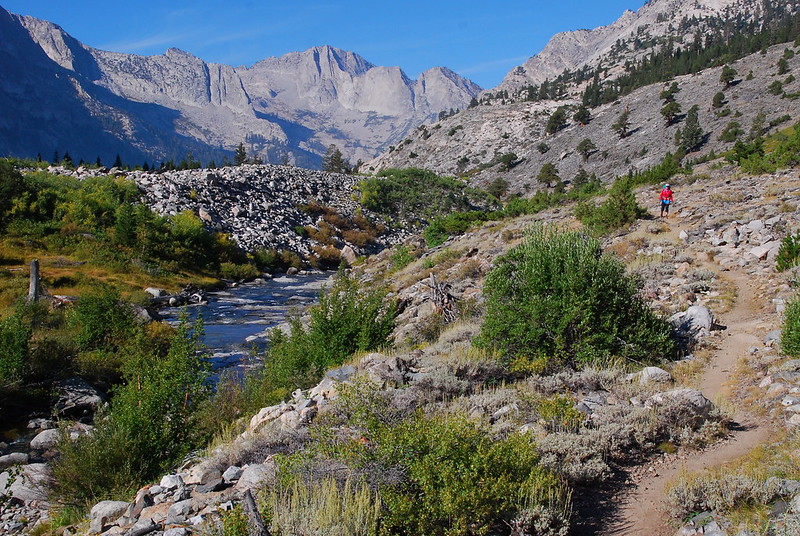 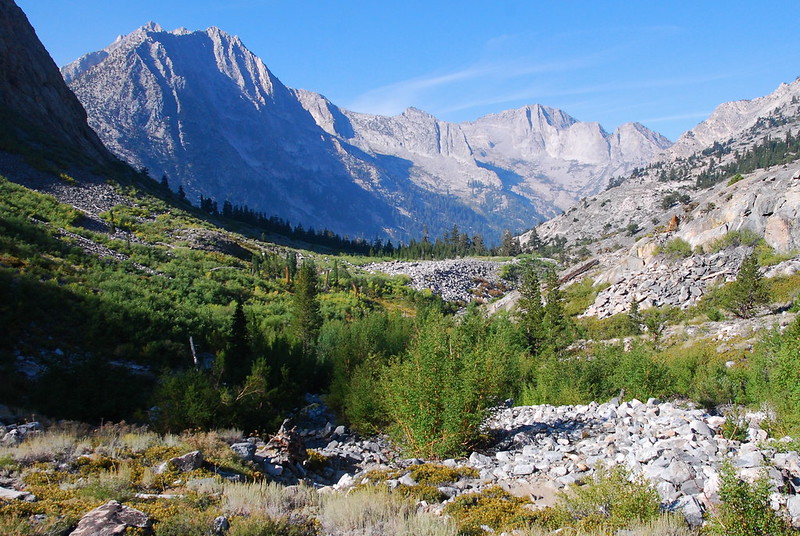 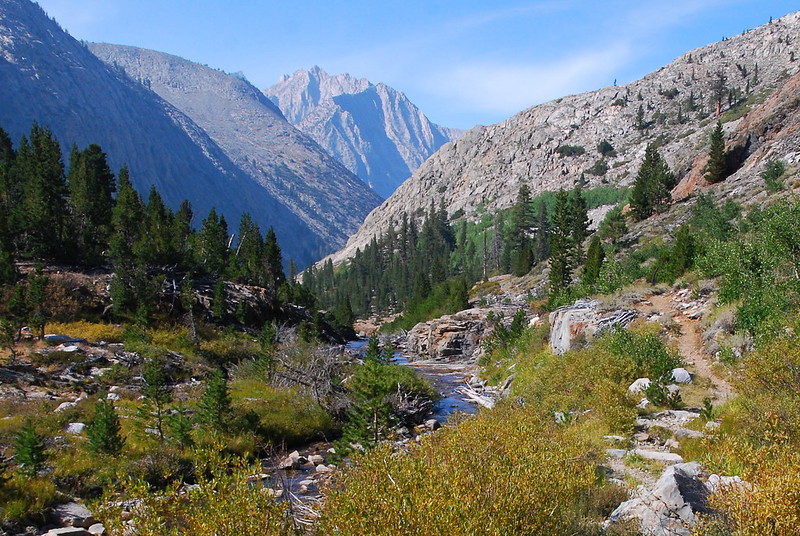 The trail steepens as it enters a small woods, watered by Crater Mountain’s creeks. I’m struggling this morning. I put on the end of an audiobook – Douglas Adams’ Last Chance to See – about traveling to see endangered species before they’re gone. It’s the middle of the night and they’re up searching for a flightless bird, a distant relative of the dodo, driven nearly extinct by the same forces that killed its more famous relative. It’s raining and cold and they’re all hungover. But then the sun starts to rise among the misty mountains and they find one. It playfully picks at their guide’s fingers as he examines it. He’s seemingly unfazed by the blood tricking down his arm.

We stop for breakfast at a small creek overlooking the Woods Lake basin. It’s just eleven, but the smoke’s already overtaking the lower sections of our creek. We eat quickly, weary of what’s coming, then continue upward, to the open basin under Pinchot Pass.

I make it to the Sawmill Pass Trail, our last easy escape option for a while, and wait for Krista there just to check in. When I ask if she’s sure she wants to keep going, she doesn’t even dignify it with an answer. Of course we’re going to keep going. Nevermind the blood. 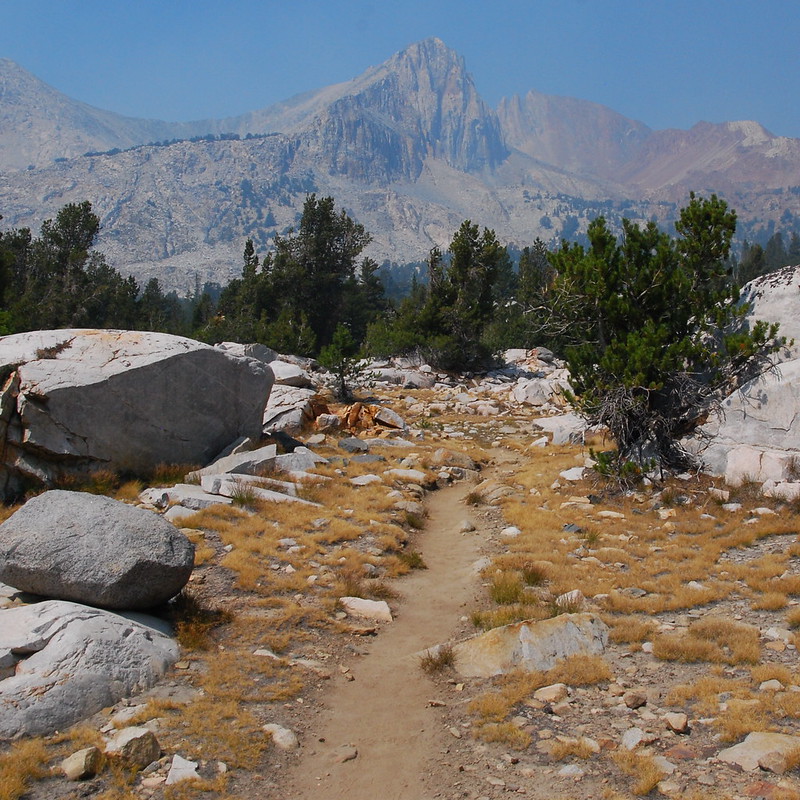 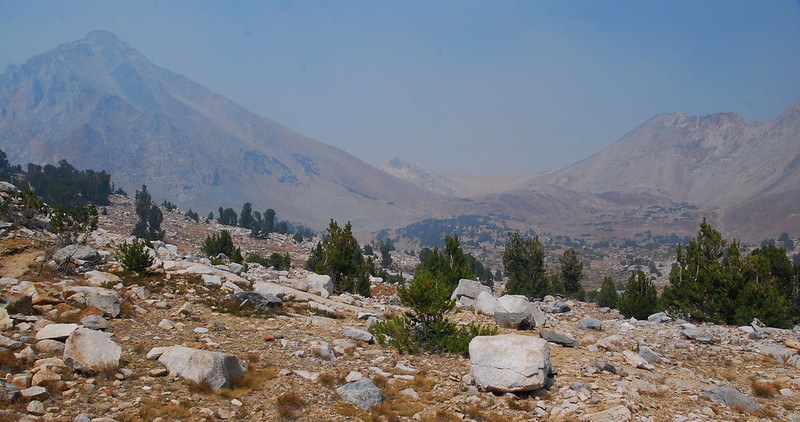 After the Sawmill Pass junction, we run into the first official-ish person we’ve met all trip: a biologist working with the National Park Service, on his way over Pinchot Pass to “mow down” with some of his NPS buddies who are staying at the Bench Lake Ranger Station. Dude’s moving! He’s so much faster than me. As he passes, I feel almost stationary.

For our part, we continue to pick our way up the pass, as the landscape becomes more and more like the moon. Or, as Krista says, Mordor. Just east of the pass is a large peak – Mount Wynne – with a dozen small tarns underneath. It reminds me of an alternate universe Jefferson Park. I think for a moment that I kinda miss home. 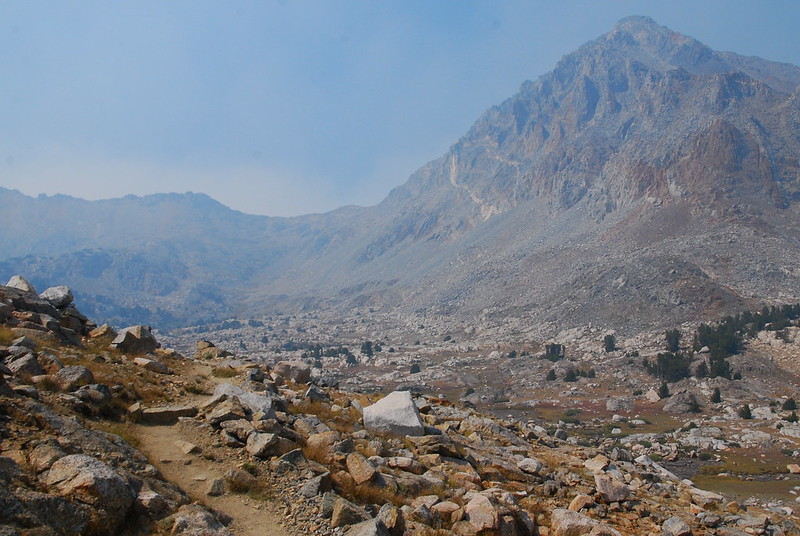 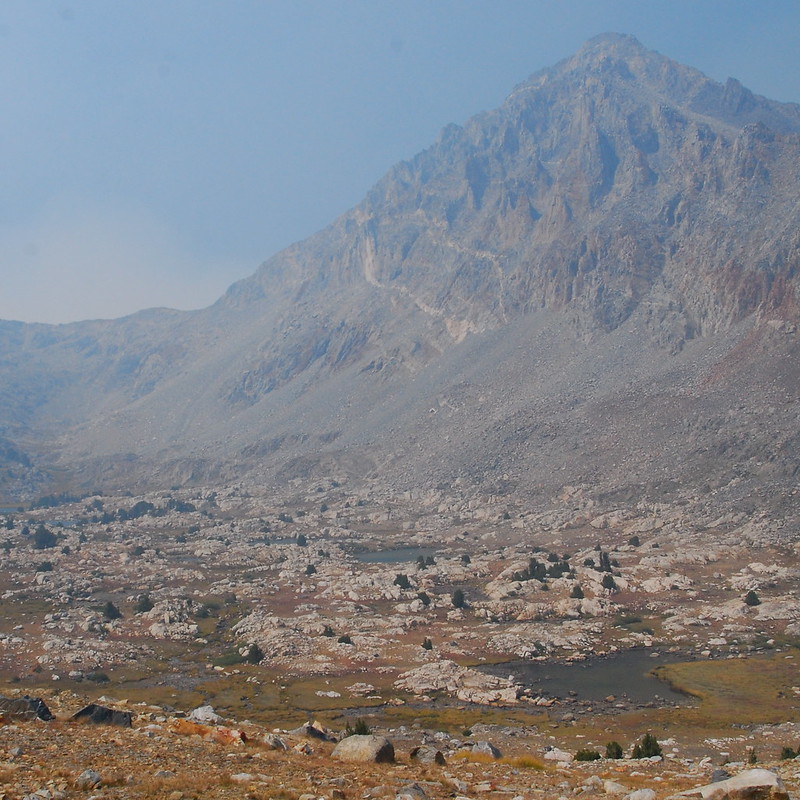 The smoke thickens as we approach the pass. I struggle some more. My breath is off – shallower than it should be. The landscape becomes more like the moon. 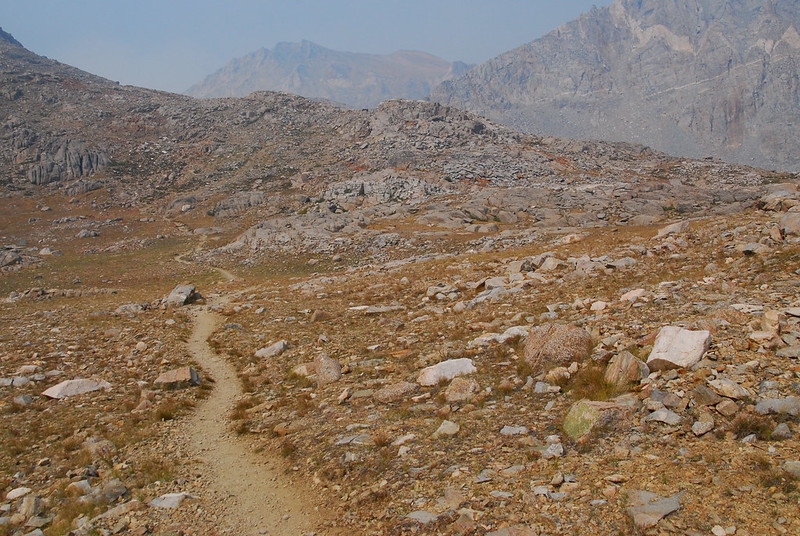 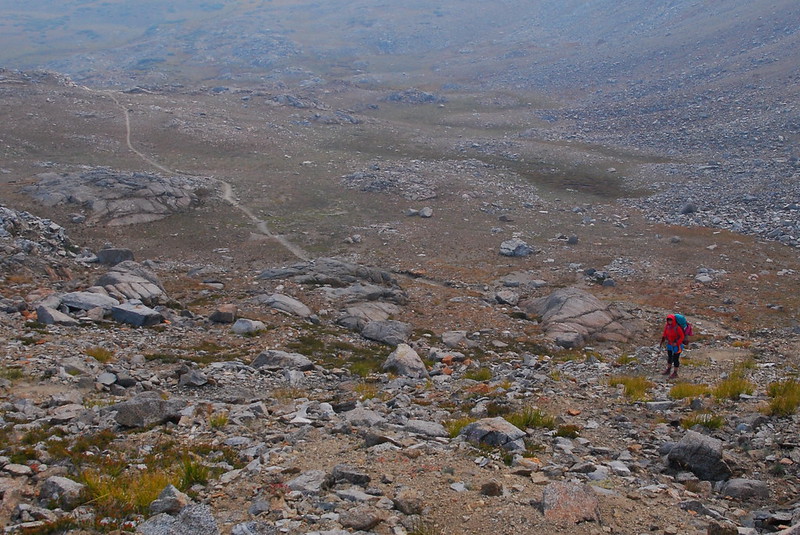 The last few hundred feet before the top are a jumble of switchbacks, back and forth between boulders, autumn yellow grass and lichen, a darkening smoke white sky. I’ve never seen anything like this before. I’m still slow from whatever the hell is going on with me, but I forget myself for a while. It’s thickly silent but for my footsteps, and the faint, muffled, measured taps of Krista’s a little ways behind. 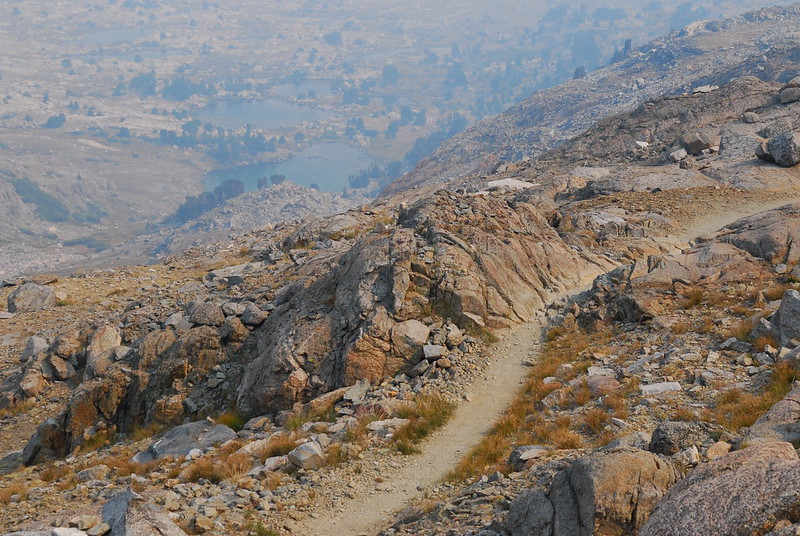 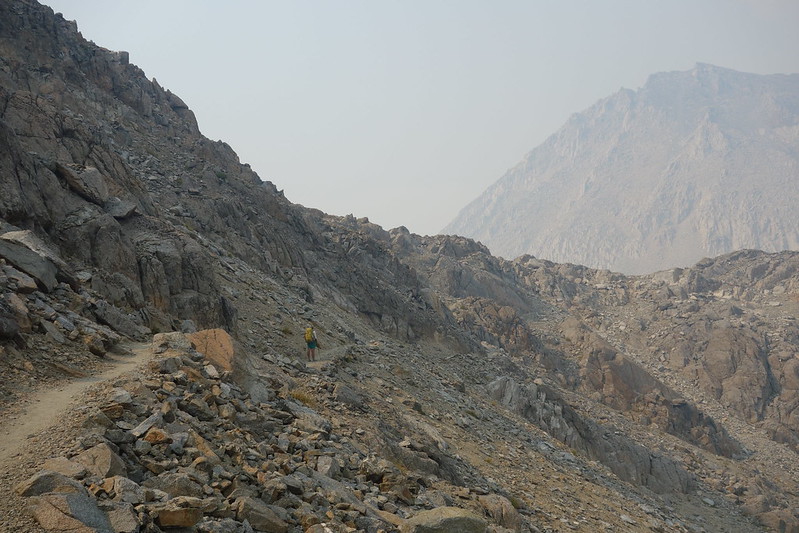 We’re both unreasonably tired when we make it to the top, where we stop for a quick snack. I’m rationing my food to make sure I haven enough to make up for time we lost near Glen Pass, and I’m hungry. I eat a handful of trailmix like it’s the best thing I’ve ever eaten. At that moment, it is. Krista lies flat an a glacier-polished granite slab. “Marmotting.” She tells me to come lie next to her, and I lie on my back, facing the sky. I think the sun’s up there somewhere? We stay like this for a very long time. 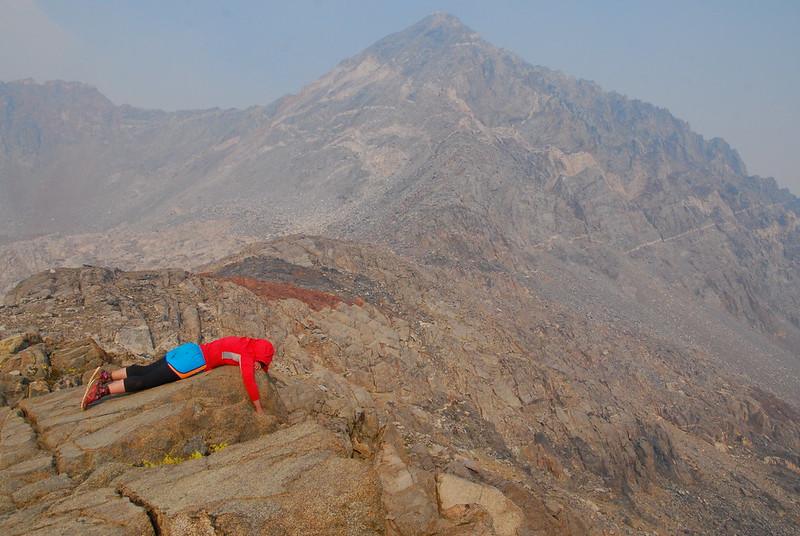 There’s another jumble of switchbacks on the north side of the pass, but we make it down quickly, a half dozen ponds just below, stretching to the edge of a broad, broken plateau. 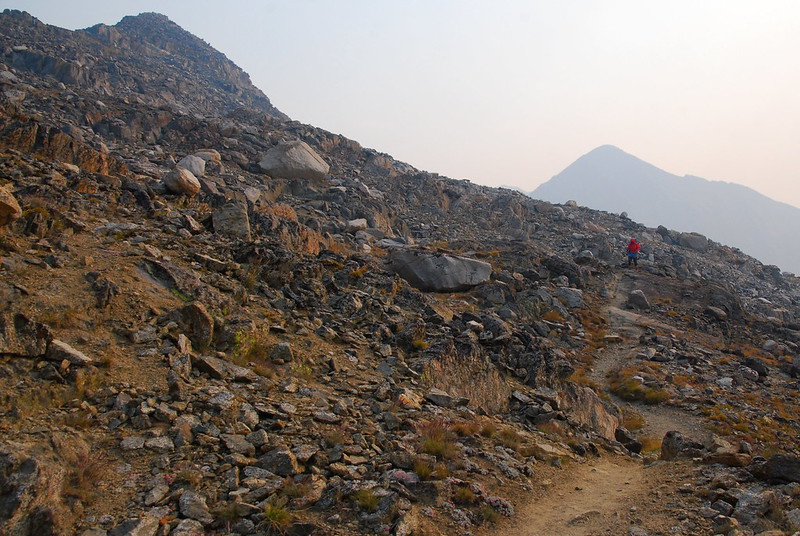 We descend a few hundred feet to Lake Marjorie, and make camp in a clump of trees. The water is clear and deep – from the shore, it drops ten feet to a smooth granite floor. I jump in for a swim – which turns our to be more like a frozen, panicked splash – and climb out to dry and a clean, still-warm rock. 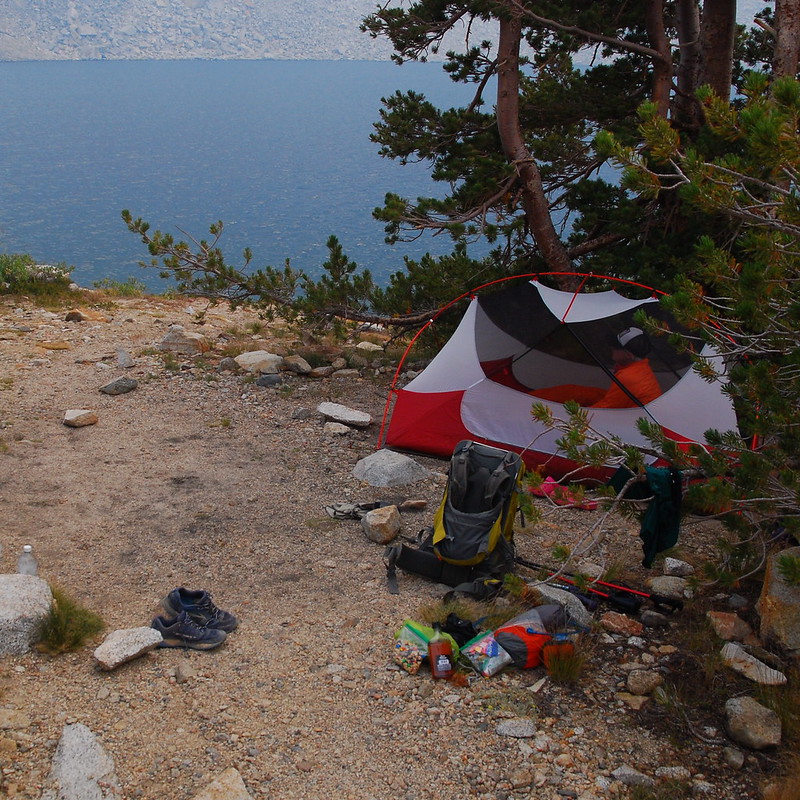 I spend the evening thawing, as we watch the smoke clear and stars come out over our lake, and the cold drives us to our sleeping bags.

As we fall asleep, a jet passes close overhead, booming and buzzing into our silent basin. The engine echoes over the otherwise calm water, again and again for half an hour. Some sort of drill? I think vaguely about what it would be like if something terrible happened while we’re up here. The jet goes, and I stumble out into the once-again silent sand to pee. If something horrible happened, maybe we could just turn around, and come back here.

One thought on “JMT, Day 9: Marmots in Mordor”