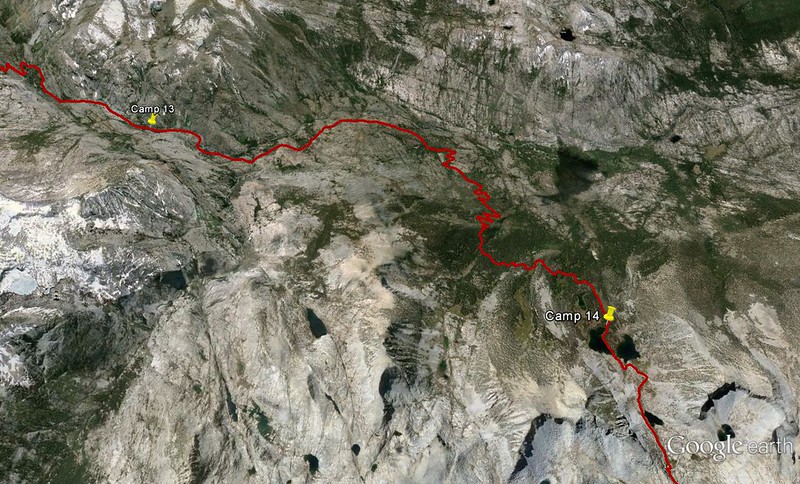 We wake up early, eager for our resupply, and hightail it to toward Piute Creek, which marks the boundary between Kings Canyon National Park and the John Muir Wilderness. The trail’s rocky and wild and beautiful, but as we approach the National Park boundary it’s more and more worn – horsier and dustier.

We stop at the creek for breakfast, eat in a small shaded dirt nook ten feet off the trail. The longer we’re out here, the more our habits meld with the contours of the wilderness, the easier it is to find home among the rocks and roots.

A Battalion of Bros passes in the opposite direction – the first of several we’ll see. They’re all in clean cotton flannel and massive Osprey packs, full Boy Scout mode. Walking with whittled wooden sticks, out to conquer something. Uh oh.

After breakfast, we continue down the dusty trail to Muir Trail Ranch. There are more and more dayhikers – the first for at least a week – who are all headed to Piute Creek from MTR. A few stop to talk, and I want to tell them to go further: there’s a beautiful creek beyond the bridge, and beautiful lakes beyond that, and a pass, and a million passes… But alas. 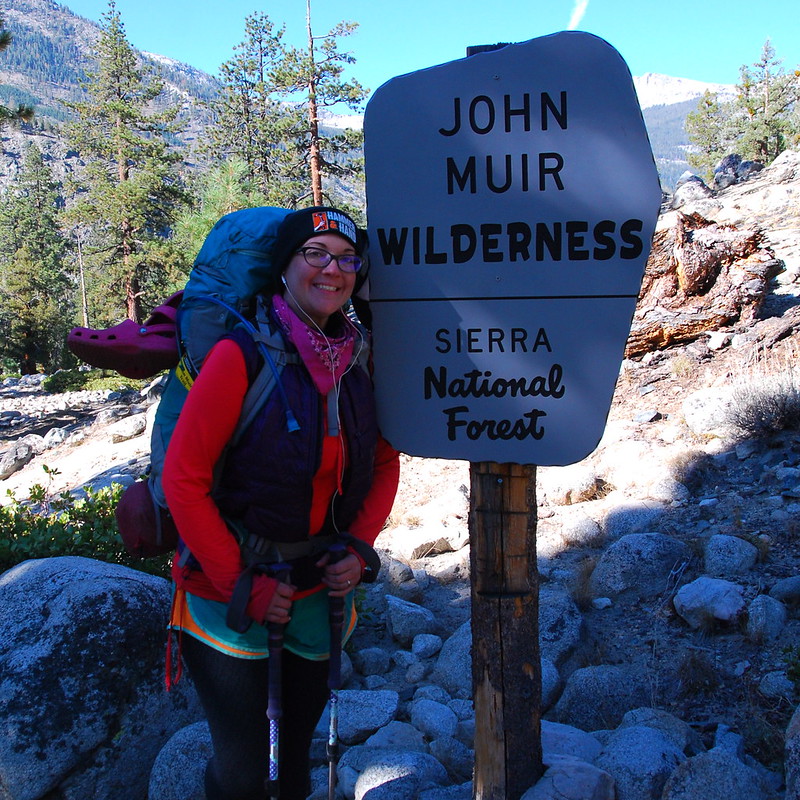 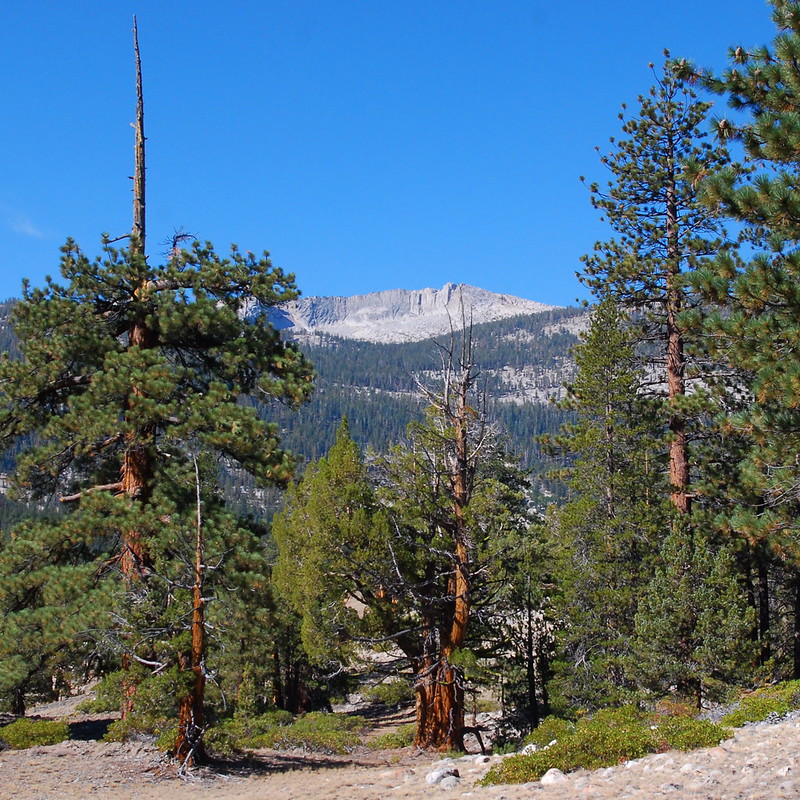 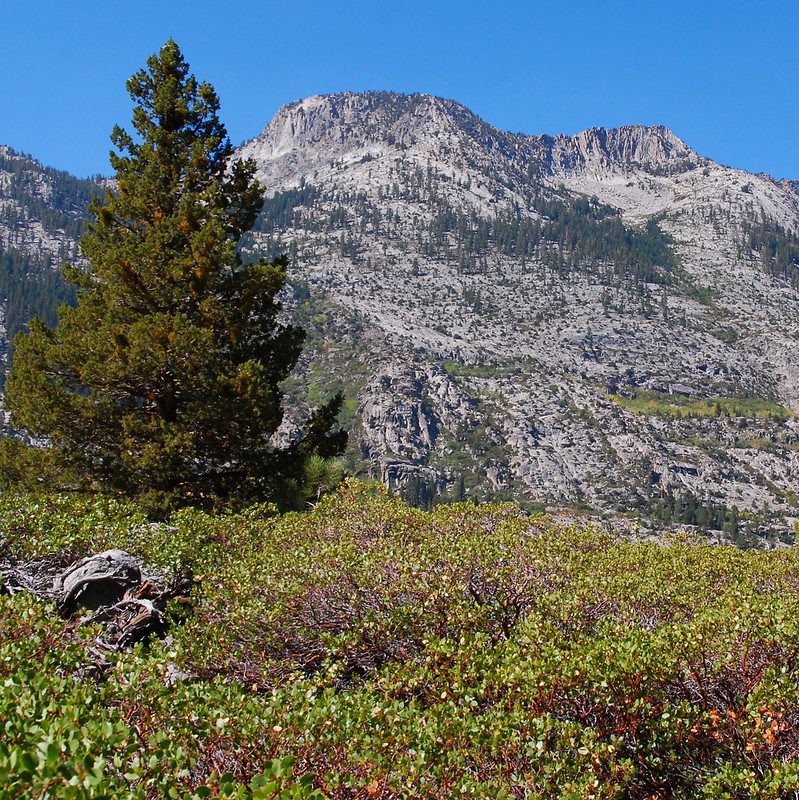 We leave the PCT on the ranch cutoff,  andthe trail is suddenly posh. It feels weirdly tended to here – like winter routes groomed for cross country skiing, or, maybe more aptly, the Wilderness Explorer Camp at Disneyland. Are these still real trees? 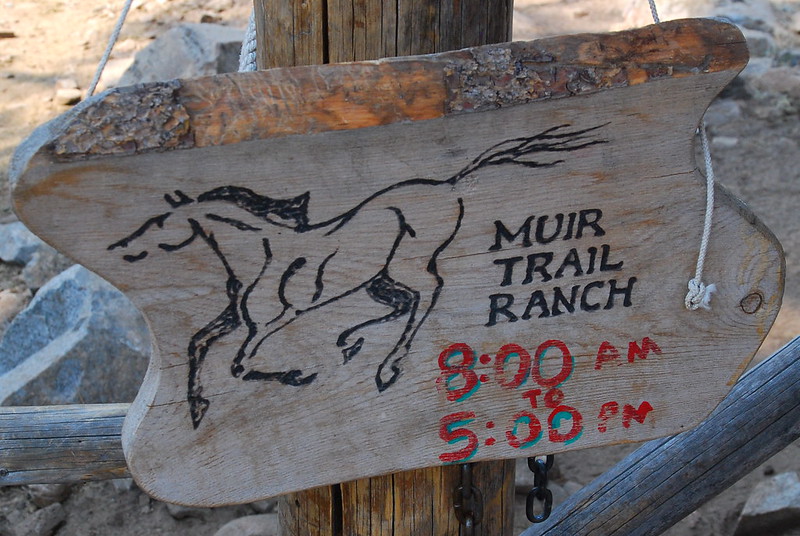 So here’s the thing about MTR: it’s not a place for hikers. They’ll of course gladly take your money to hold your resupply, but the resupply service is only a small part of their business, and the rest of the place is dedicated to… I don’t know. Expensive rustic vacation rentals. It sort of feels like resupplying on the set of a bad western.  If you go in expecting a hiker-friendly place, you’ll be disappointed. But if you go in just wanting to get your food and get out, you’ll get what you want.

The woman running the resupply is super friendly though, on a rickety stool reading a massive paperback. She tells me that, in summer, they usually get something like thirty hikers a day picking up resupplies, but that, because of the fire, they’ve been doing something like eight. There are a dozen hiker boxes scattered around the resupply area, filled with every manner of leftover food. We pick up some extra coffee, vitamin C, and some junk food to substitute for lunch.

Up to this point, nearly everyone we’ve met on the trail since Horseshoe Meadows has been really friendly, and, interestingly, the gender balance has been very close to equal. But at MTR there’s another Battalion of Bros hanging out, taking up too much space, bragging at each other. Krista goes to put some food in the hiker boxes – we’ve packed way, way too much for this section – and one of them, we’ll call him Mr. Pufferfish Jr., accosts her, aggressively asking if she knows what she’s doing. Is she sure that she can spare it? How long have we been out? Does she really think that she, as a woman, can handle an adventure like this? Does she want to seem him flex, or do a couple dozen push ups? Bench press his sixty pound pack?

Being northbound, at this point we’ve been on the trail longer, and through harder miles, than this dude.

Listening to his bullshit, I think for a second about jumping in. But Krista can handle herself. Of course she can handle herself. That’s the point this guy’s missing. She doesn’t need his, or my, help. I think of something from Liz Phair’s first album: “He’s just a hero in a long line of heroes, looking for something attractive to save.”

We deal with our resupply for a while – some olive oil has leaked all over everything, so there’s a bit of cleanup necessary. The Bros are talking about fishing. Cooking their catches over open flames. Damsels in distress. Riding rugged horses into the sunset.

“They say he rode in on the back of a pickup, and he won’t leave town ’til you remember his name.”

Someone asks us about the smoke and trail quality to the south. Krista’s in the middle of answering when PF Jr. interrupts, giving some (wrong) information from when he (purportedly) did the trail a few years ago.

I have no idea what drives men – and, seemingly, only men – to act this way, particularly towards women. It sort of seems like The Bros’ egos are somehow wrapped up in the trail being a manly adventure, and the presence of women doing well – Krista, in her glorious Rainbow Brite ensemble – is somehow a challenge to this whole order.

It all makes me miss home, where this shit seems to happen a whole lot less. People who actually spend a lot of time outside see a lot of different people making it work in a lot of different ways, and, almost inevitably, seem to lose the ultraveled dogmatism. I think hikers are the best people in the world. The Bros aren’t hikers.

We get out of MTR shortly thereafter, back, thankfully, onto the trail. As we leave, PFJ is waxing philosophical. Apparently he’s got a wife and some kids back in Appalachia. She’s apparently taking care of them alone, while he does all this hard work.

It’s around one now, and the day’s become hot and smokey. We take our time up the steep, buggy, dusty trail back to the PCT. Krista has an encounter with some hornets. Then it’s up through a few more hot – though thankfully not so buggy or dusty – miles of switchbacks toward Selden Pass. 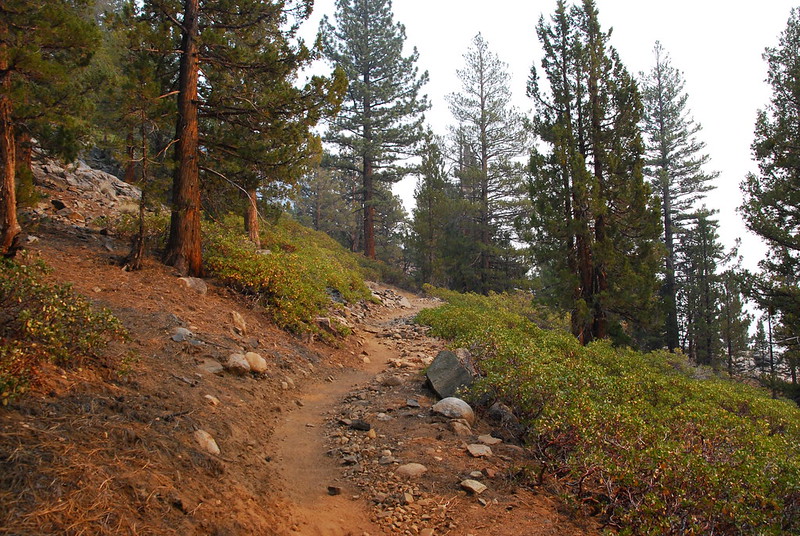 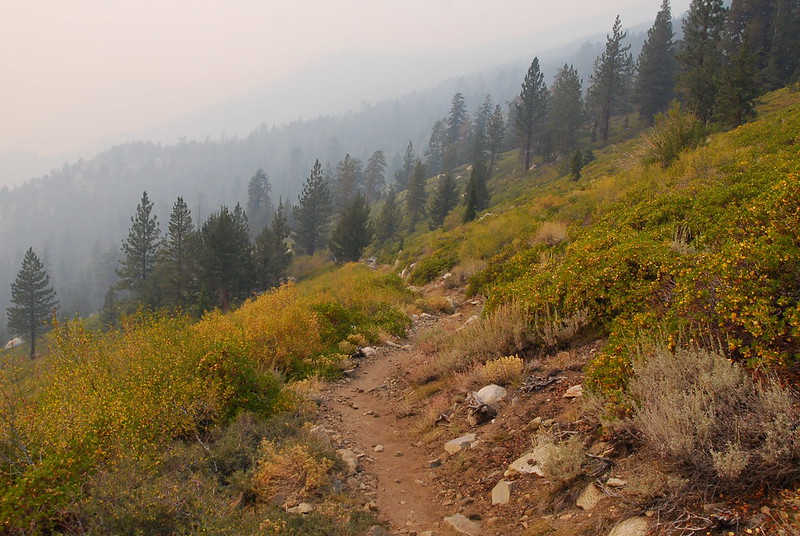 We reach the end of the concentrated climbing just as the day’s cooling, and take a long break at Senger Creek, where we meet another northbounder, only our third or fourth of the trip: a solo woman who seems to have been out for a very, very long time. She’s taking it even slower than us, with a bunch of zeroes and neroes between the lakes. I envy her a little, but she seems lonely. We stay and talk for a while, then linger a little longer. But we’ve got schedules to keep, and miles to go before we sleep.

From Senger Creek on, the trail’s mostly flat and completely pretty, as it skirts through granite fields and lightly wooded meadows. The sun’s red, reflecting off the white granite. Now everything’s red. 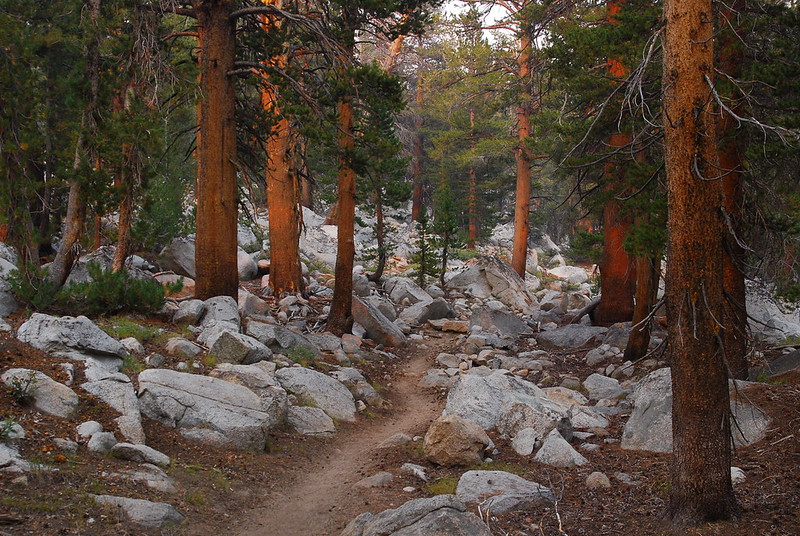 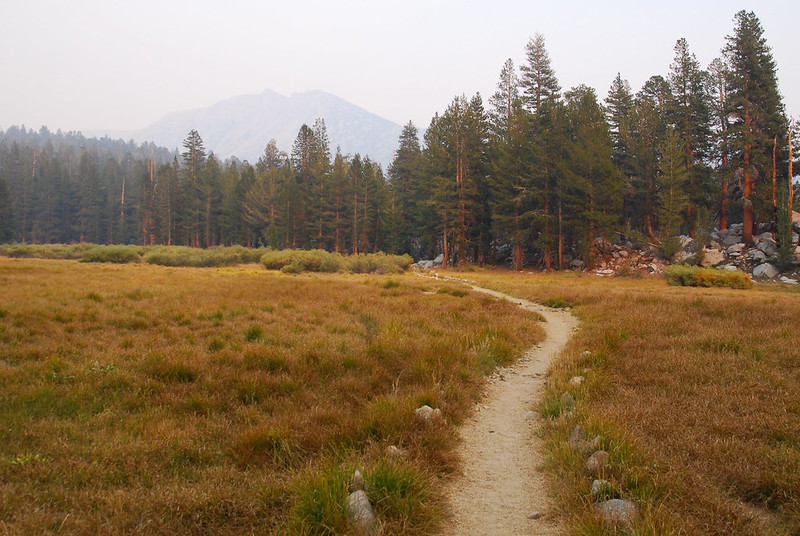 Rambling along, we interrupt a family of deer having dinner. One has a sort of collar around its neck – maybe a tracking device? Maybe just Backwoods Fashion? 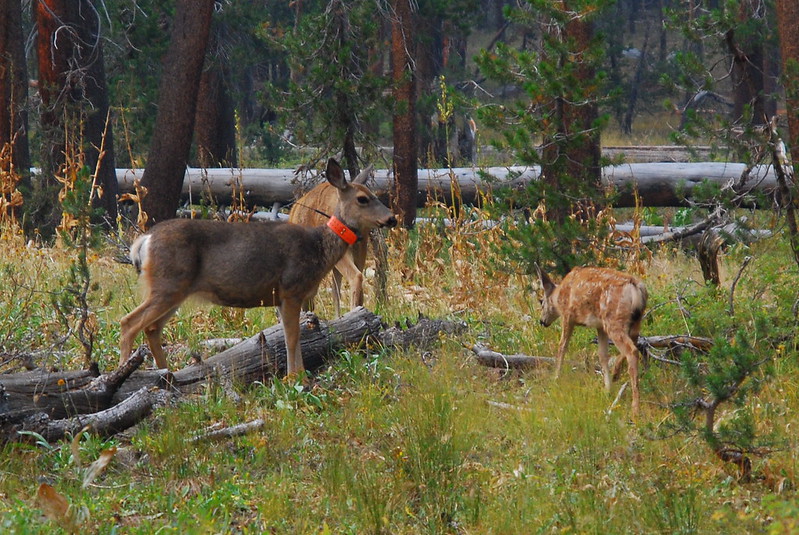 Just as the sun’s thinking about setting, we arrive at the Sallie Keyes Lakes, our home for the night. We rush a bit setting up to give me time to jump in before dark, which I do. I don’t think I’d realized before this trip just how much of a luxury it is to be clean. I jump in, scrub the dust off my arms and legs, splash freezing water on my face, then scramble to put on all of my warm clothes against the encroaching cold. 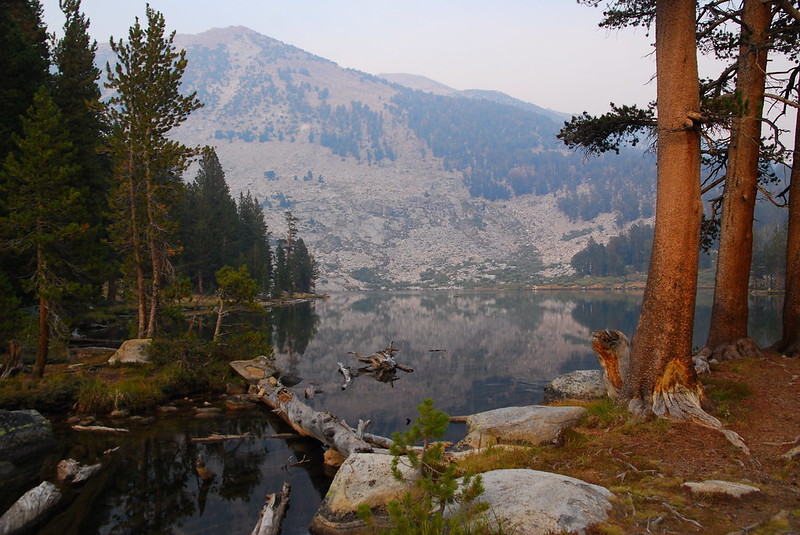 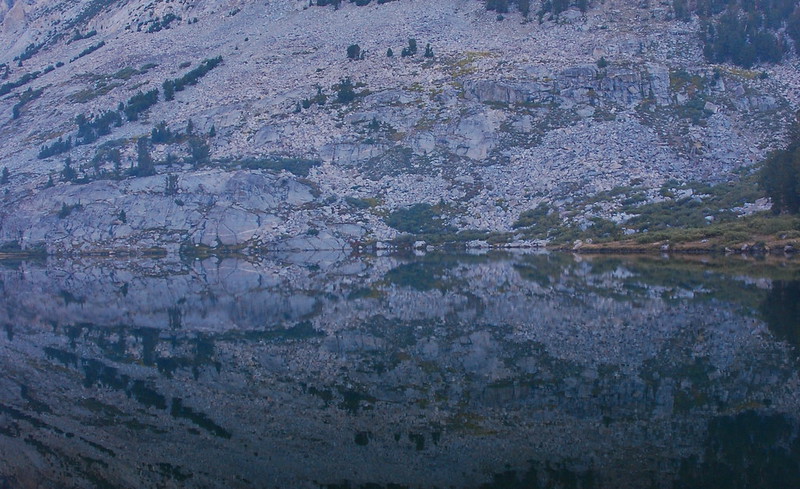 Dinner’s some freeze dried gumbo we got from the hiker boxes at MTR. We add salami and smoked paprika and olive oil. It’s so good! I think it’s my favorite dinner of the entire trip. Vegetables! Man I’d missed vegetables. Even freeze dried ones.

We go to sleep clean, with full stomachs. Drifting off, I think about how lucky I am to have Krista here, to have an equal I can lean on and who, on the rare occasions when she needs it, can lean on me too; who understands that this has never been about conquering anything; who’s as happy as I am to just be together in this wonderland.