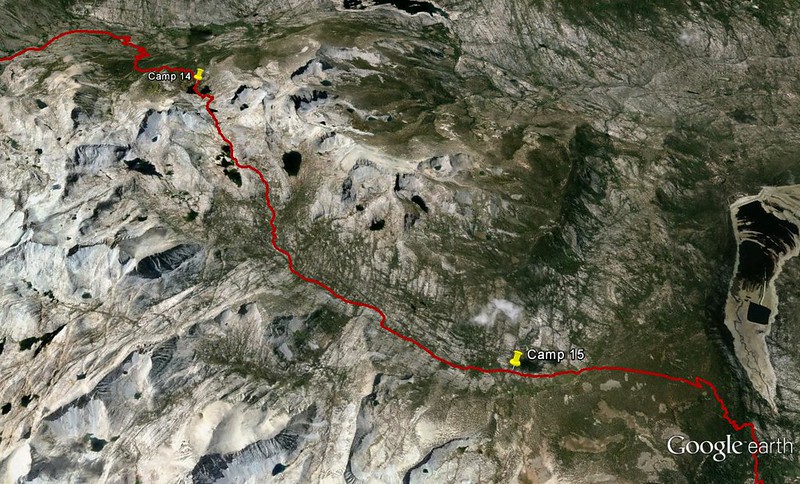 I wake up suddenly in the still-dark tent to the sound coyotes howling all around us. For several minutes, it sounds like hundreds of them. Their calls echo off the rocks and water, bouncing back and forth from everywhere all at once, filling all available space. But then just as suddenly it’s silent but for a lone voice, left not howling but whimpering. Its cries spread out, falling further and further apart: instants then seconds then minutes. Then there’s nothing at all.

I think we just heard something die.

I guess this is what it means to be in nature? Anyway, I’m very thankful for our tent as I fall back into a fitful sleep.

We sleep in. The walk between Independence and MTR was something of a rush, but now we only have a few miles to go everyday.

I wake up first and go sit by the the lake on a rock at the edge of the water and put my feet beneath the glassy surface. 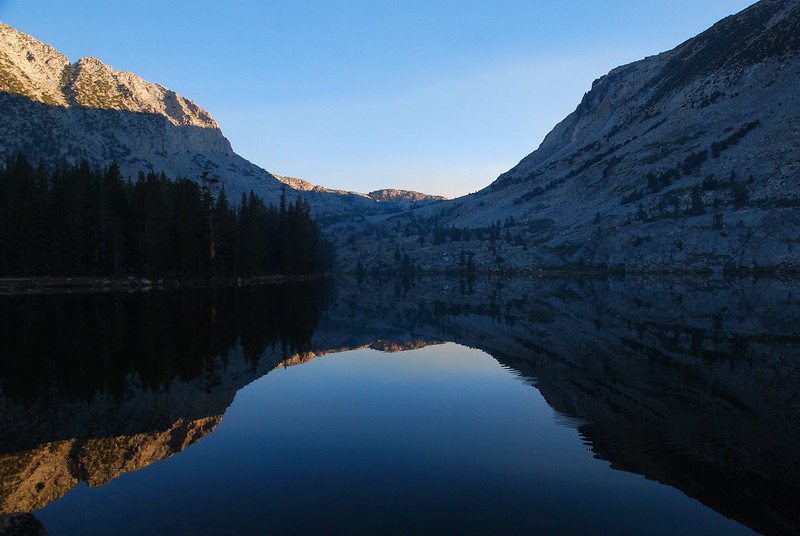 The sun slowly rises over Mt. Senger, and suddenly I’m in its light, bright but still cold. I lie on the shore for a while, listening to Jackson Browne, eating gummy bears. When I was a kid, my dad used to play this album when he was cooking dinner. Those are some of my favorite memories of home: sitting at the dining room table while he cooked, listening to loud stuff from the 70s, pleasantly arguing about politics or something. Krista and I have a couch in our kitchen now.

Krista wakes and the wind picks up. We wash some clothes, lay them out on the rocks to dry, and make breakfast at camp, sitting on stumps around an old fire pit. 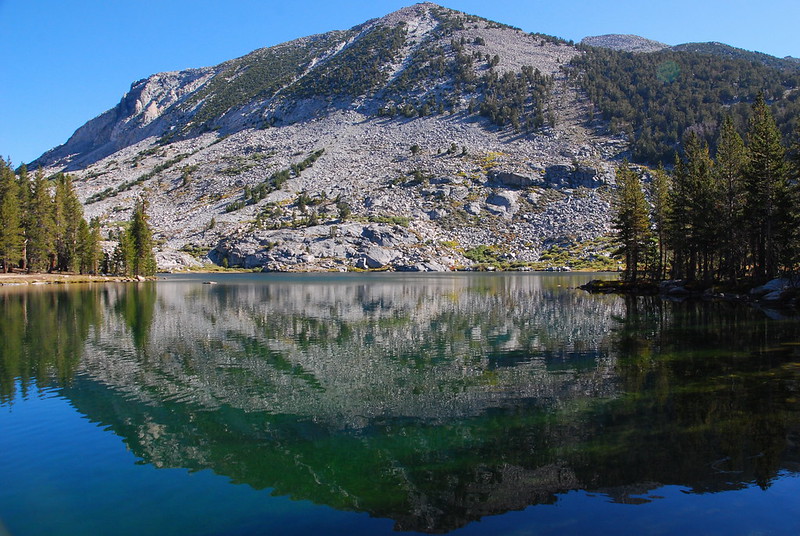 Eventually it’s time to go, and we reluctantly pack up, still wet clothes hanging from safety pins on our packs. I put Jackson Browne on again. Something about today… I just want to listen to that album on repeat. I don’t know. It’s been a while since we’ve been home, and I’m starting to miss it. But at the same time, this is starting to feel like home. Not completely, of course, but the routines have become routine. Sleeping somewhere different every night has started to feel normal.

When I first moved out of my parents house, I would wake up in the middle of the night unsure of where I was. I had the same bed, my room was setup the same – every room I’ve ever lived in has been setup the same. I’d wake up and take a wrong turn to the bathroom. “Oh right, I live alone now. In the middle of the city.” It was hard to fall back asleep. I went for a lot of midnight walks that first year.

That hasn’t been happening on this trip. I wake up and hear Krista’s breathing. Oh right. We’re here, wherever that is. We’re going to be somewhere else soon, but that’s okay too. That’s life. That’s how you see the world.

The day starts with a gentle climb up Selden Pass, with gorgeous views back toward Sallie Keyes Lakes and the Evolution Valley.

There are a lot of people headed down the other way – short section hikers going to MTR. A general rule: the shorter the trip, the bigger the pack. I’m not sure how that works.

A few hundred feet up and we’re at Heart Lake, named for its obvious, but somehow impossible to photograph, shape. 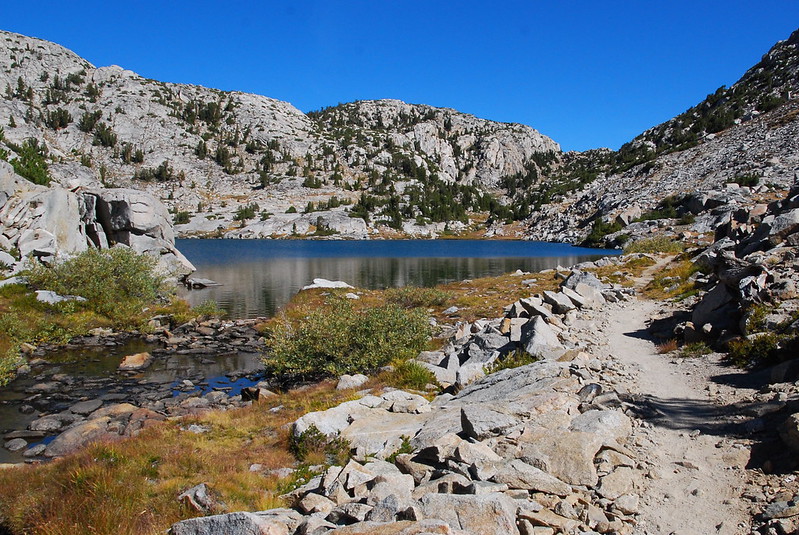 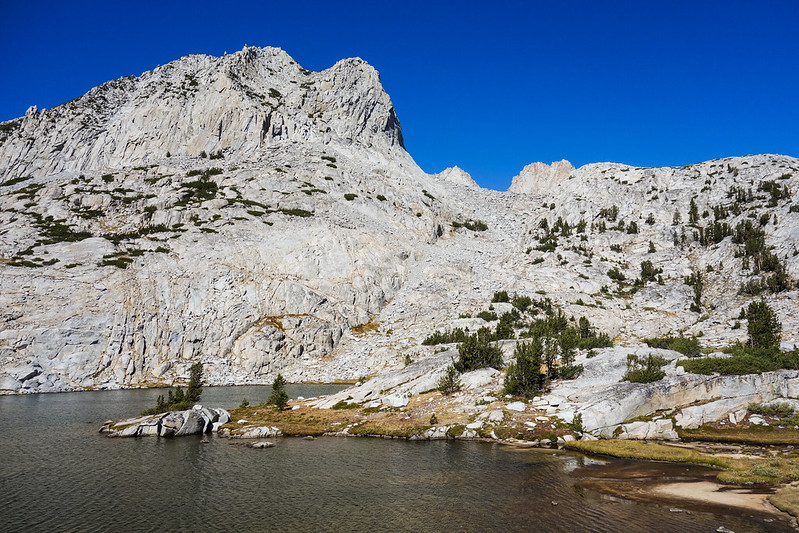 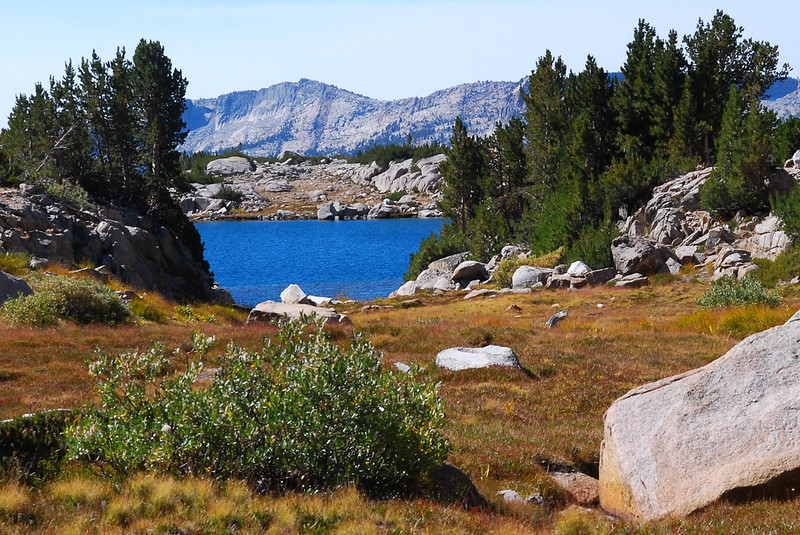 The trail stays gentle all the way to the pass, where we’re given gorgeous views south to where we’d been… 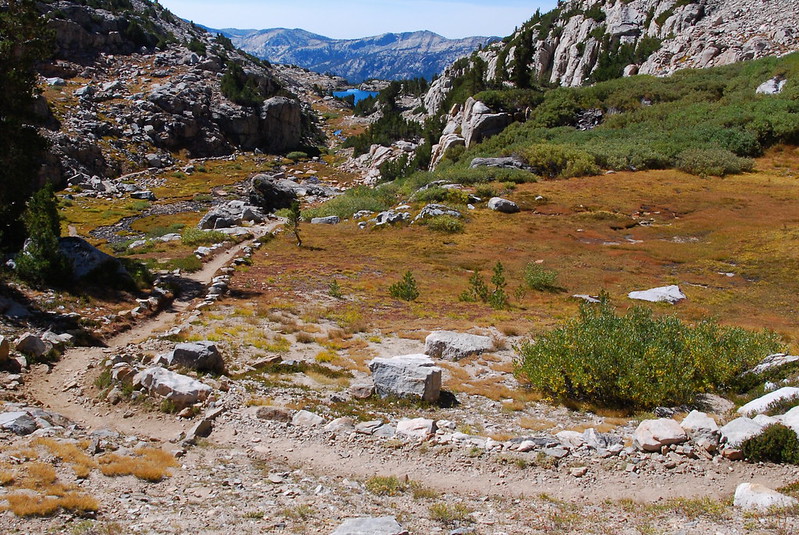 … and north to where we’re going. Here’s Marie Lake from Selden Pass:

“Hey! Get out of my picture, knucklehead!” 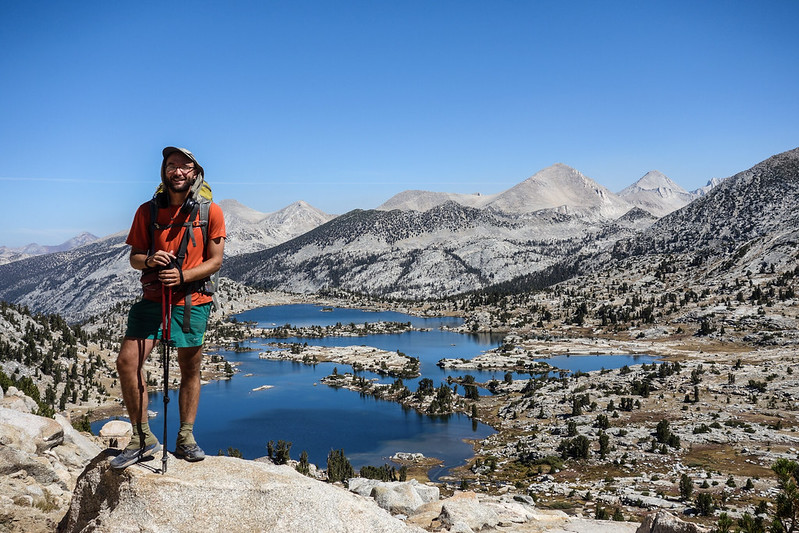 We sit on top for a little, eating fruit roll ups we got from the hiker boxes at MTR. Have you ever had fruit roll ups as an adult? You should. They’re miraculous. Or maybe they’re awful. I can’t tell out here.

Then it’s just a few hundred feet down to Marie Lake, where we take an unnecessary but beautiful break, more to soak in the scenery than anything else. 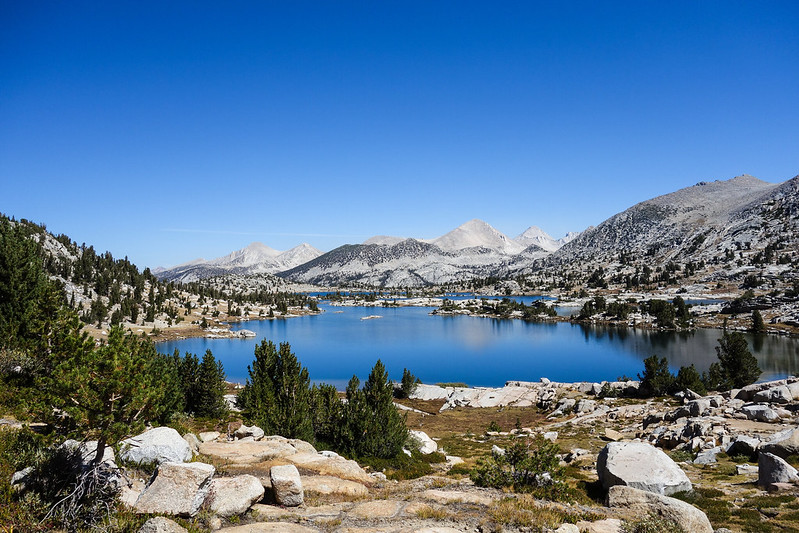 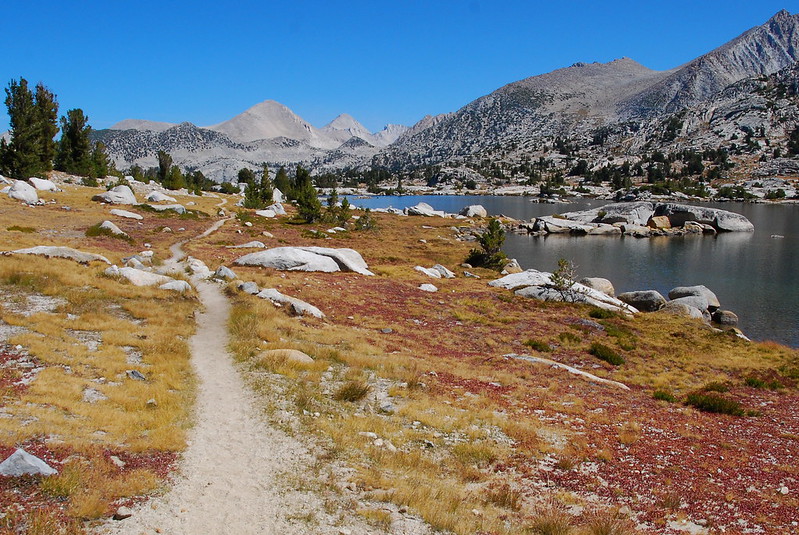 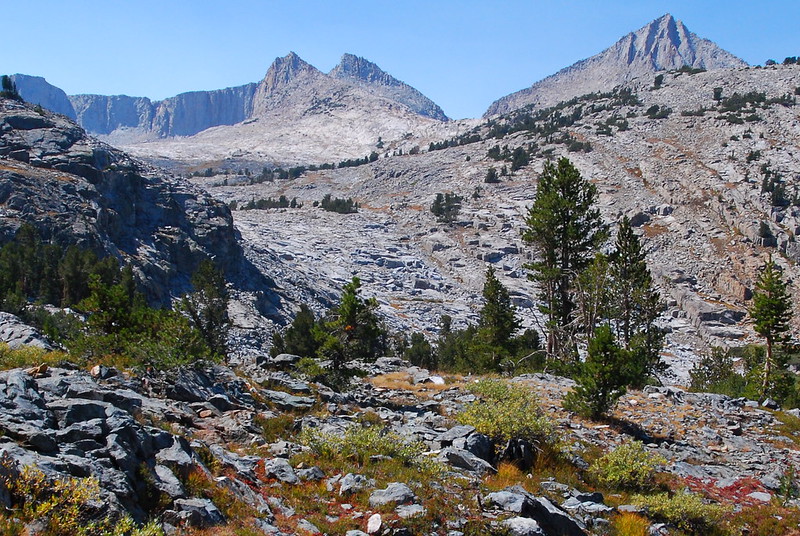 After the lake, the trail follows Bear Creek for a while, through pretty wooded valleys and smooth granite falls, where I somehow manage to take no pictures. There are small water crossings every couple miles, where we stop and sit for a second. It’s fun just to space out, walk slowly, do nothing in particular.

Krista’s feeling sort of shitty – maybe the cold I started the trip with – and so we stop early. Camp’s a granite bench just after the trail leaves Bear Creek, near the last water for five or six miles. We set up the tent in a sandy nook between boulders and she falls right asleep. I ramble around camp, making a valiant attempt to get through Infinite Jest on audiobook. I have a quietly wonderful time wandering around doing chores, slowly and inefficiently. I make a half dozen trips to the creek when two would’ve done, stopping each time to soak my flip-flopped feet. I feel like a bumbling old man at the edge of the world.

The smokes comes in, but it’s thin, and only serves to turn the sky red as the sun sets. 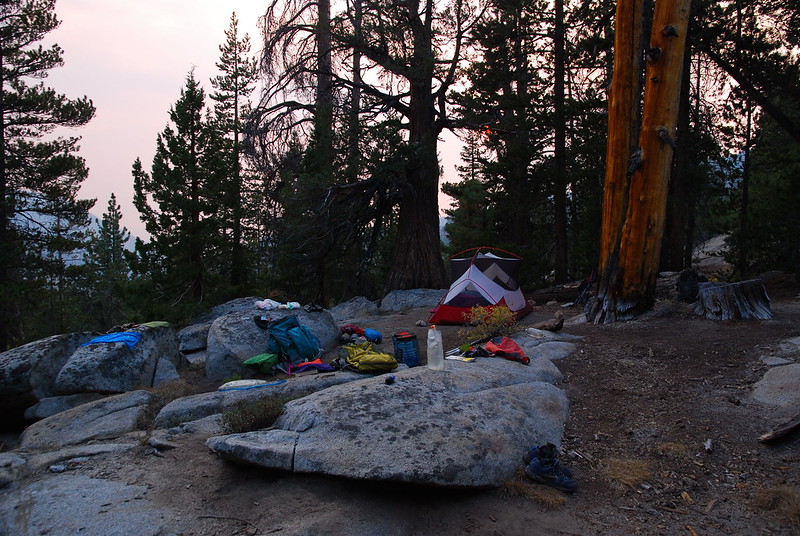 I make dinner by headlamp. Krista comes out to eat, but then goes back in and falls asleep almost immediately. Huh. I think, for the second time this trip, about maybe having to leave the trail. If she’s feeling really badly tomorrow, we can exit at Vermilion Valley. It’ll be a shitty hitch back to our car in Yosemite, but it’s doable. And anyway, I feel weirdly okay with whatever’s going to happen.

A bumbling old man at the edge of the world.

Back in Yosemite, when we first left the car, Krista and I both had this immediate and immense sense of freedom. We were carrying everything we needed. That feeling’s only deepened in the last couple weeks.

For most of my life, I thought I was going to be an academic. I guess I still sort of do, but I’m less sure now. As I near the end of graduate school, it seems further and further away – the job market’s worse than I realized when I started this all, when I was an invincible twenty-two year old writing a master’s thesis I thought would change the world.

I used to only see one possible future: I’d be a professor, like my dad. But now I see a million, like in that overwrought thing from Sylvia Plath, “branching out before me.” The world’s a lot bigger than I used to realize. More is possible. The idea of leaving an old dream breaks my heart, but now I see all the new shapes in which it could be rebuilt. We’ll be somewhere else tomorrow night, and maybe that’s okay.

The stars show up, shyly at first, over a hole in the smoke. Then the smoke retreats and the sky’s full. I crush a few juniper berries and put them in my bourbon. It tastes a little like gin, and I think about the gin and tonics my parents used to drink when I was a kid, with fresh mint from my mom’s garden.

It gets late and I crawl into the tent to fall asleep holding Krista’s sleeping hand.