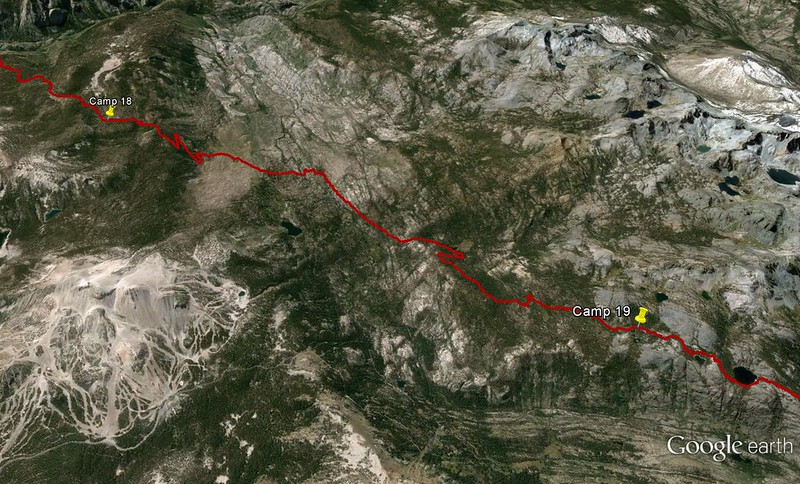 I wake up already thinking about cheeseburgers at Red’s Meadow, four or five miles away. We pack up quickly, with what I begin thinking of as “Cheeseburger Efficiency” – that is, the level of efficiency one only achieves when cheeseburgers hang in the balance. I think we’re walking fifteen minutes after waking up.

The trail’s easy – soft and wooded, shady and cool – and we cruise on to the Red Cones, like miniature versions of the hills around Three Sisters. 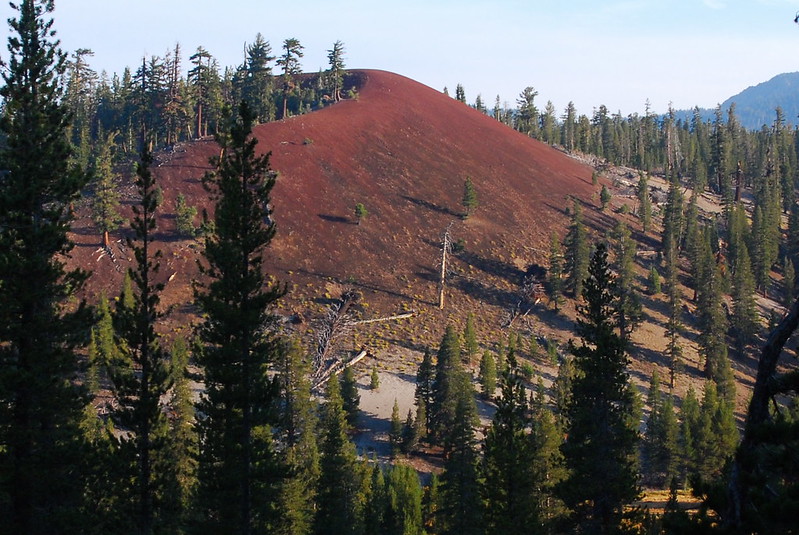 The trail switches back steeply through the woods, down towards a large, blank, burned out meadow. Yosemite’s just across the way – a line of white gleaming granite against the horizon. With any luck, we’ll be there at this time tomorrow. Funny to see the future laid out like that. 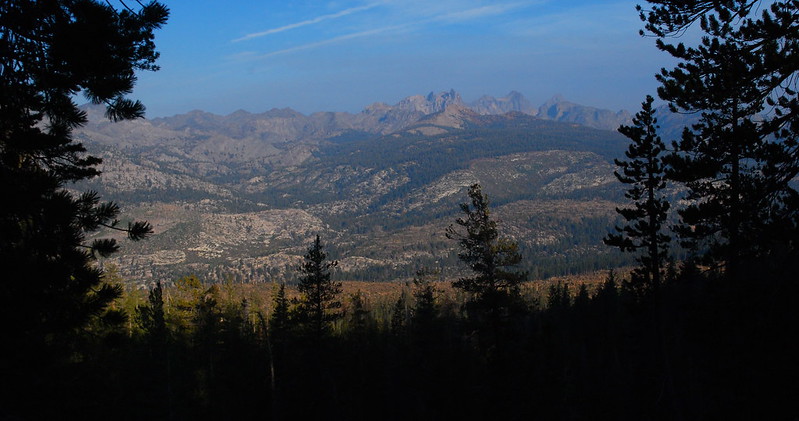 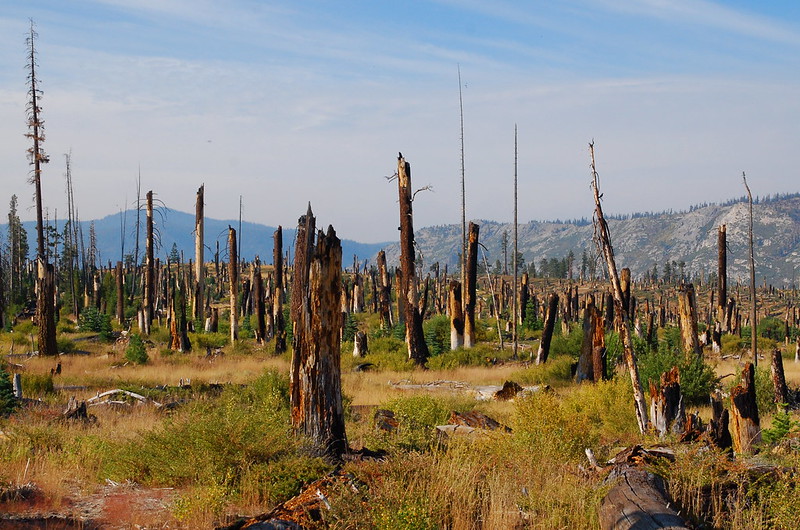 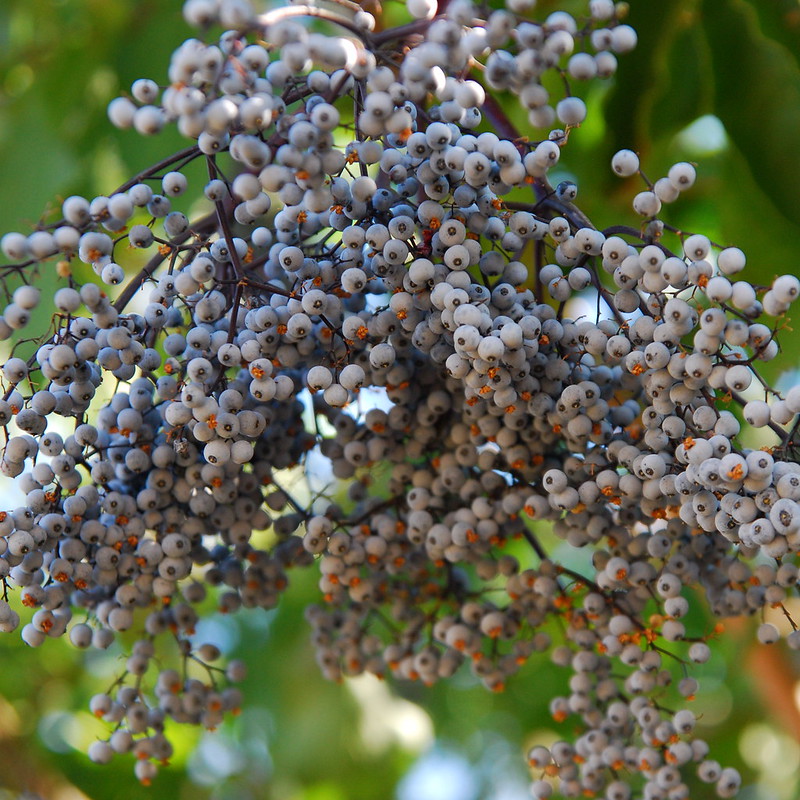 There’s a tangle of trails at the far end of the meadow, and we pick a way forward more or less randomly. But eventually we emerge at an old horse stable. A happy, handsome guy in his twenties is talking cheerfully at a group of unhappy couples all in their fifties about horseback riding safety.

We follow our path until it becomes a dirt road, then pavement, then a parking lot full of RVs and shiny compacts with California plates.

Red’s, it turns out, is in some sense the exact opposite of MTR. The place is set up for hikers. We pick up our resupply in the just-opened general store, which also sells shower tokens and quarters for laundry. A well-packed dirt path leads from the store through sparse, ancient trees to the laundry and shower building, where we put on our rain gear and throw everything else we have into a washing machine. It’s maybe half a load total.

While the laundry goes, we hang out on the wooden porch outside, taking turns in the showers and talking to a bunch of southbounders who stayed here last night. They’re nervous about the smoke, and it feels strange now to be the ones who’ve seen the worst of it. Apparently the Rough Fire’s grown a lot since we were there, and reports are that the smoke’s gotten much worse. I’m so thankful to have made it through when, and how, we did.

A few of them decide to stop here rather than risking it further on, and call a cab from Mammoth. A couple dump their entire resupplies in the hiker box then buy pre-noon beers at the store. It’s hard to watch, especially because I’m not sure it’s the wrong decision.

In the shower, the water turns black when it first hits me, and it stays that way for at least thirty seconds. Gross. I scrub everything twice, until the water runs mostly clear, then change into my newly washed clothes, and walk out into the sunny porch to dry. It’s absolute paradise.

We walk into the little restaurant just as it’s opening for lunch, in sandals, still wet from the showers. I order a double cheeseburger and a massive coke. The burger’s at least as big as my head and the coke’s impossibly cold and sweet. The soda bubbles feel so luxurious, and I start sipping it like I imagine ancien regime style rich people do with champagne. I put on my best petite bourgeoisie accent: “Ah, September 2015. A glorious vintage! Notice how the carbonic acid plays coyly with the caramel color?” To have all this, and clean skin to boot…

I just want to go to sleep here until the restaurant re-opens for dinner.

Eventually, though, we pack up on the picnic tables outside the little store. At the next table over, a heavily made up woman is sitting with a tiny dog, talking to a resort worker. The worker, it transpires, used to have a dog exactly like the woman’s, but it got eaten by an eagle a few years ago. Eaten by an eagle. It was in the backyard one minute, then gone the next, being carried away, fifty feet in the air.

The trail out of Red’s is crowded with weekend tourists, who gawk at our packs and the bits of dirt on our legs that won’t come off for month.

We take an alternate trail to Devil’s Postpile, a pyramid of perfectly extruded columnar basalt bending and extending a hundred feet into the air. So cool! 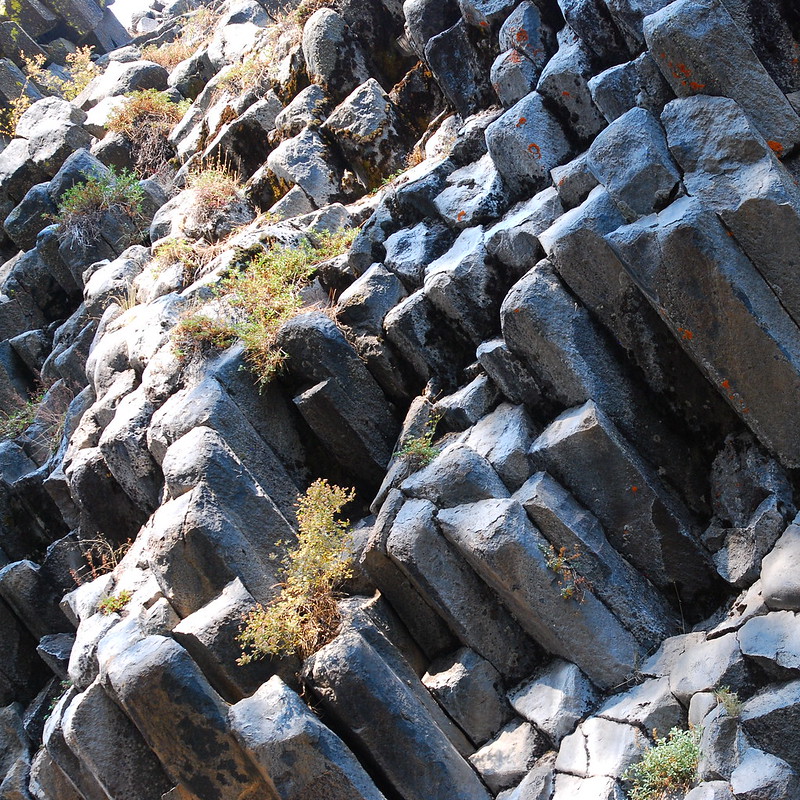 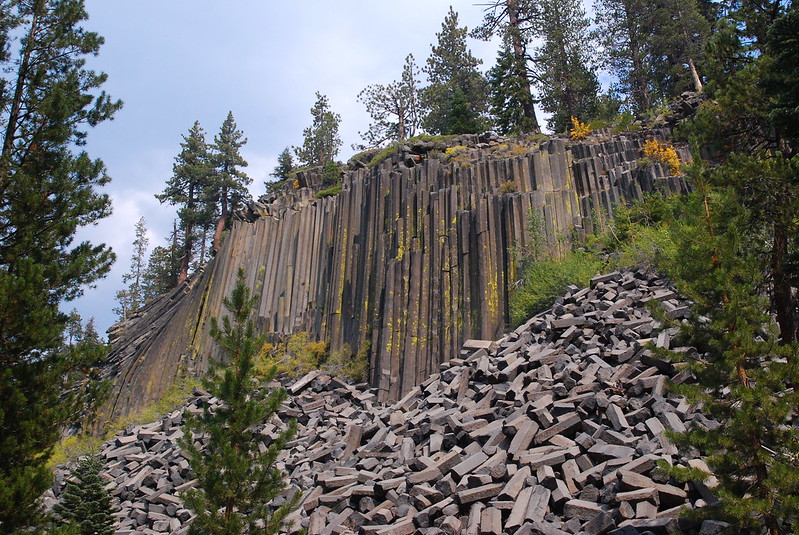 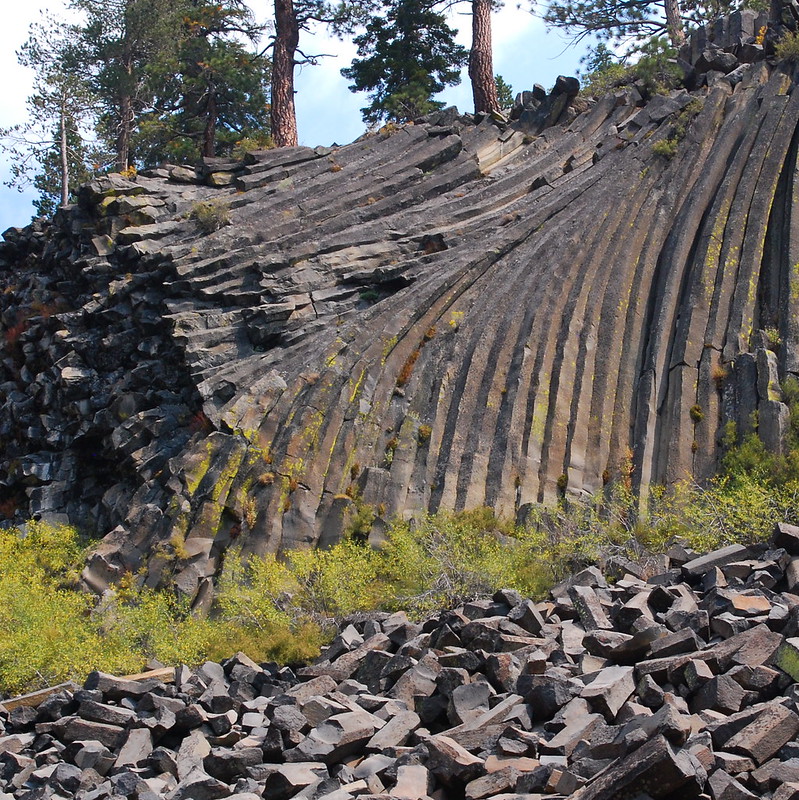 It’s strange to walk through the massive National Monument crowds. Several people ask us what are packs are for. “Can you take this trail a long way?” More than one asks about Cheryl Strayed. We try to be nice, but we’re ready to be back with the eagles.

The crowds disappear suddenly as we leave the Monument. Maybe fifty feet from the border, there’s a father and his adult daughter sitting in the dirt making lunch on a sputtering pop can stove. Our people. 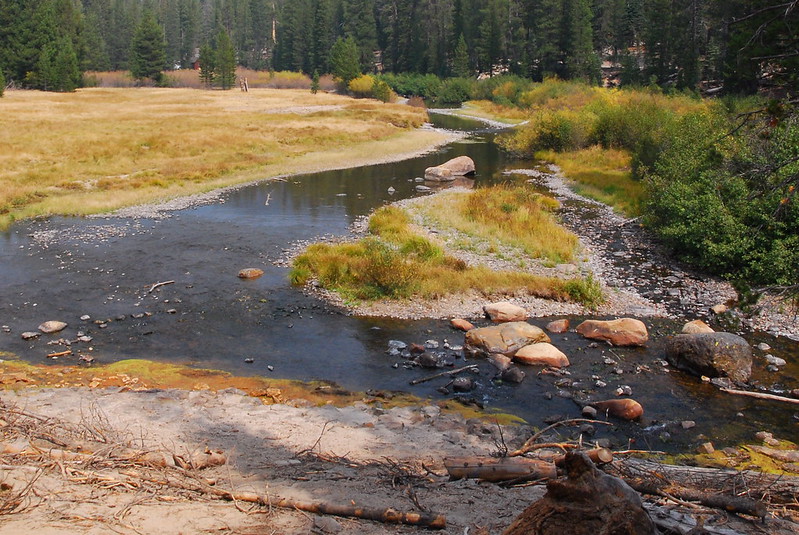 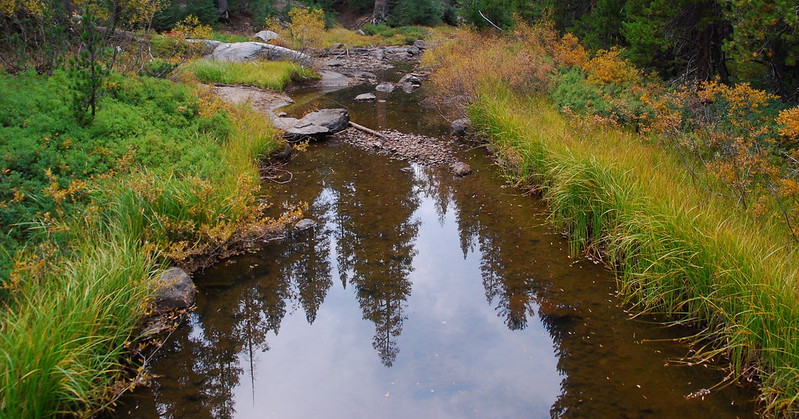 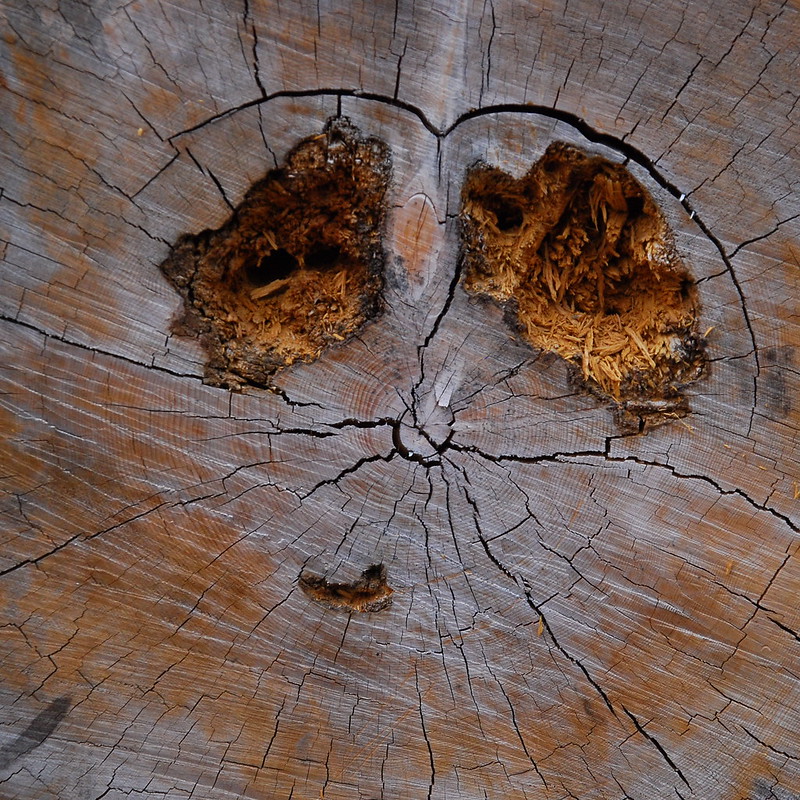 The climb out of Red’s kind of sucks. It’s only maybe 2000′ in four or five miles, but it takes a while. I walk slowly, with what I begin to think of as “Cheeseburger Inefficiency” – that is, the level of inefficiency one only achieves after eating several thousand calories of ground beef and American cheese.

We camp near one of the Trinity Lakes – I call it Lower Emily Lake, though that’s in no way official – just in time to watch the sun set over our hill. 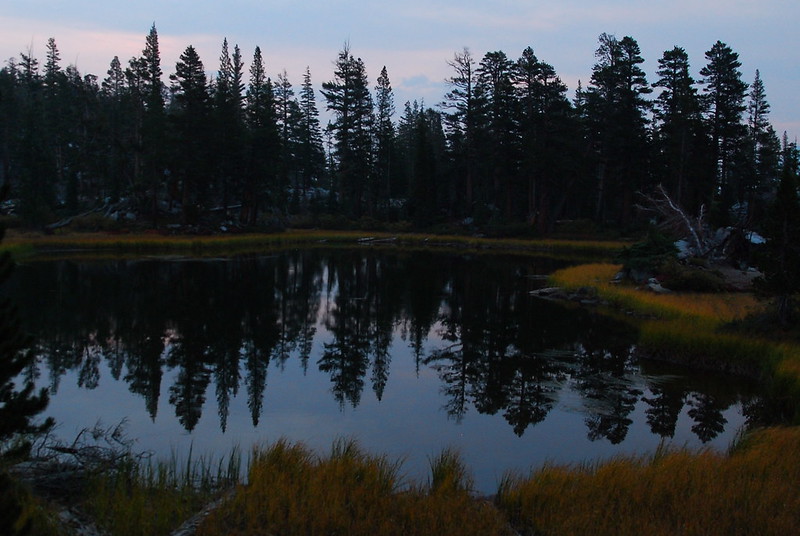 As we cook dinner – some pilfered freeze dried thing from the hiker box at Red’s – a million different birds fly, seemingly at once, out of all the surrounding trees, singing to each other and to us, then landing in our lake, pushing overlapping waves of water through the reflected trees. I walk over to the shore to watch the waves recede, and look down at my own reflection among the trees.