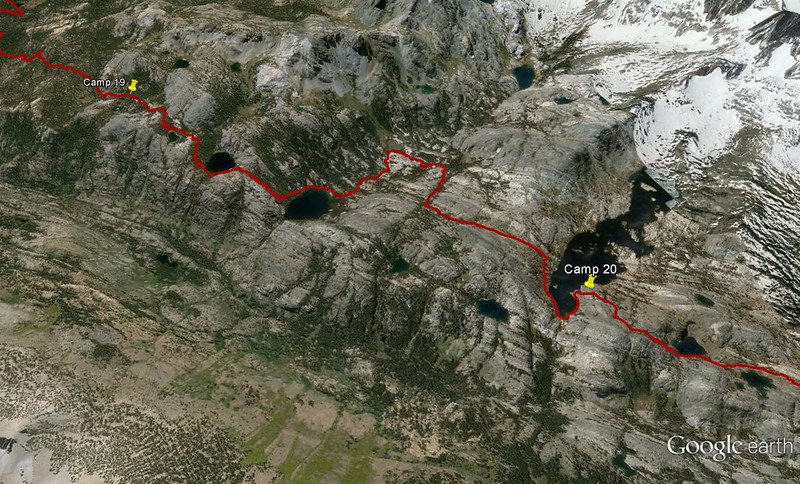 The sunrise over our lake is even prettier than the sunset last night. 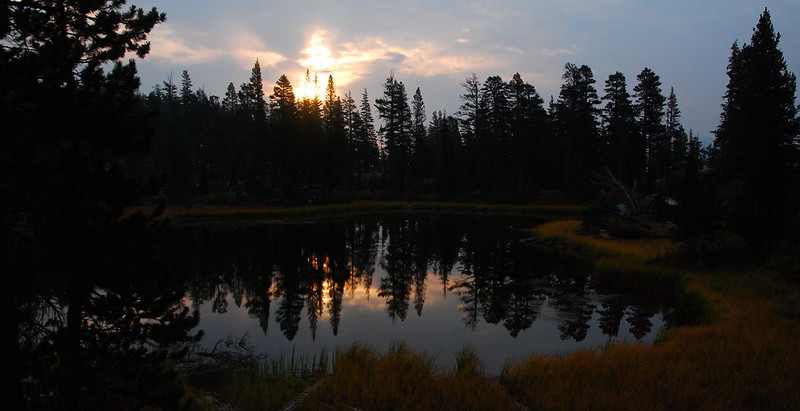 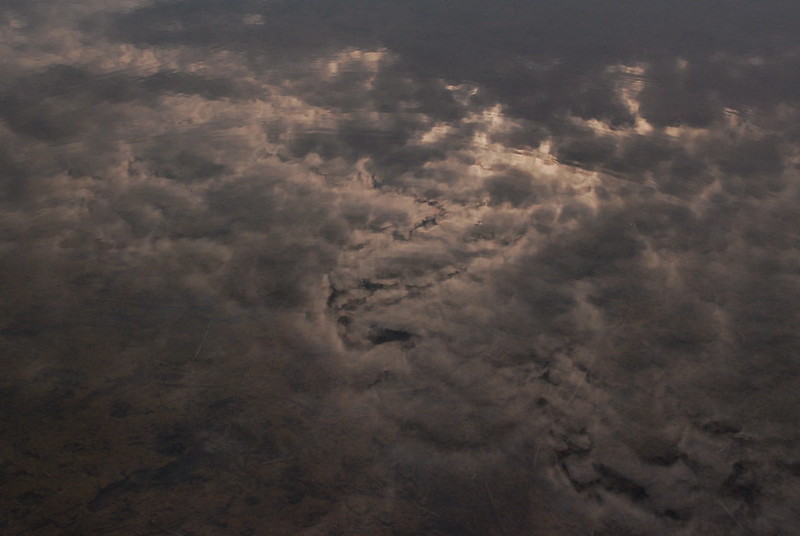 The birds are back, swooping into the water after insects, and we make coffee watching. I didn’t see it last night, but it’s autumn up here – the leaves are all red and orange, the air’s crisp. And there’s that smell, the sort of smell that always makes me think of early October pumpkin patches.

Today’s the day of a million lakes. There’s a short climb out of camp, where I surprise a family of deer having breakfast, then a short descent to Gladys Lake. 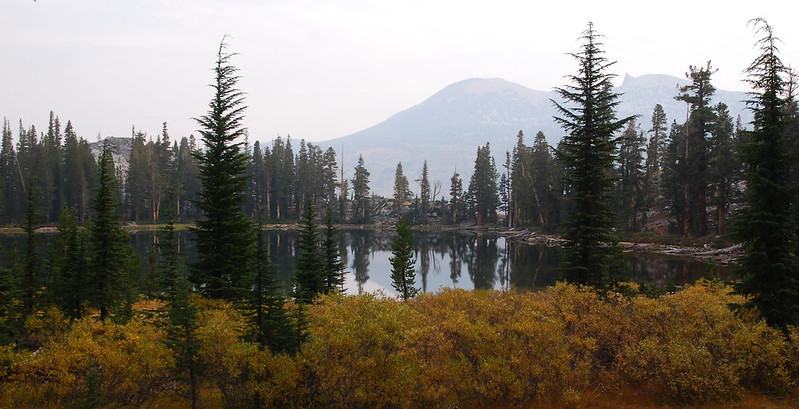 There’s something in the air, but it’s not smoke. Water! It’s thinking about raining! We haven’t seen rain this entire trip, and I surprise myself by getting excited about it. I used to hate backpacking in the rain, but now it sounds sort of nice. Now that I know we can deal with basically anything.

After Gladys Lake, the trail meanders up and down a bit, until we descend steeply to Rosalie Lake, a granite-lined pool that marks the beginning of the last stretch of granite we’ll see on this trip. 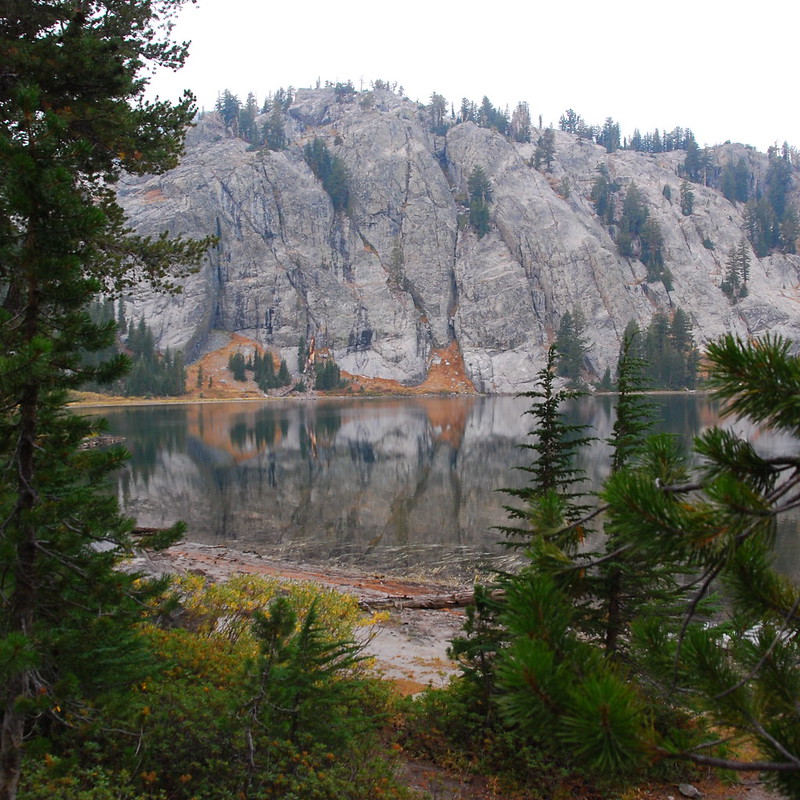 We stop on the shore for breakfast, and watch a family of ducks teach their kids to fly. The little ones push off the water, then come skidding back down a few feet later. Over and over. For at least half an hour.

It starts to rain and we scramble for pack covers and coats, but it stops just a few minutes later. Silly Oregonians. We eat our oatmeal watching clouds fly fast across the sky. 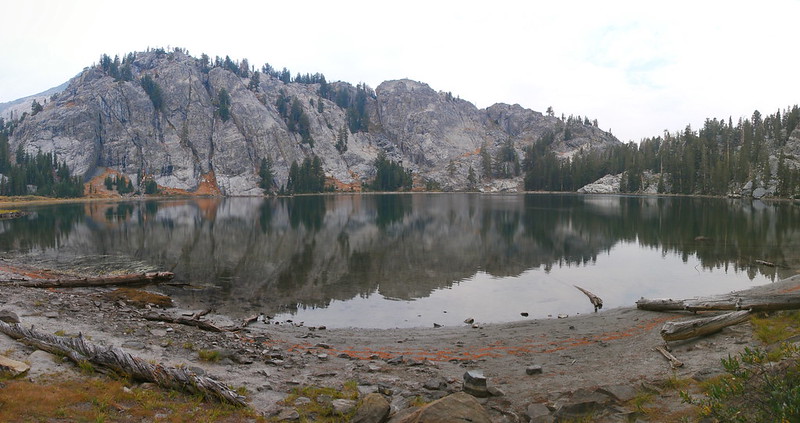 As we’re leaving, we stop to talk to an older guy camped on the northern shore of the lake. He’s from Tennessee or something, and has flown across the country to do a week-long traverse from Tuolumne to Red’s Meadow. He asks tentatively if we started at Whitney. “A tiny bit south of that, actually.” And he claps his hands, points at each of us in turn, and tells us what an achievement that is.

It’s so, so wonderful. An antidote to the bros we’d met on the shuttle and at MTR. We cheerily chat for a while longer, about bears (he hasn’t seen any, and is really sad about it), marmots (he’s seen one, and is really excited about it), and pack weight (he has one that weighs something very close to both of ours combined, and is understandably grumpy about it).

I don’t really want to say goodbye, but eventually we do, and drop almost immediately down several steep switchbacks to Shadow Lake – a large, almost perfectly oval pool lined with granite and trees in their autumn finest.

We stop on the shore for a quick second breakfast, and I run around taking pictures. 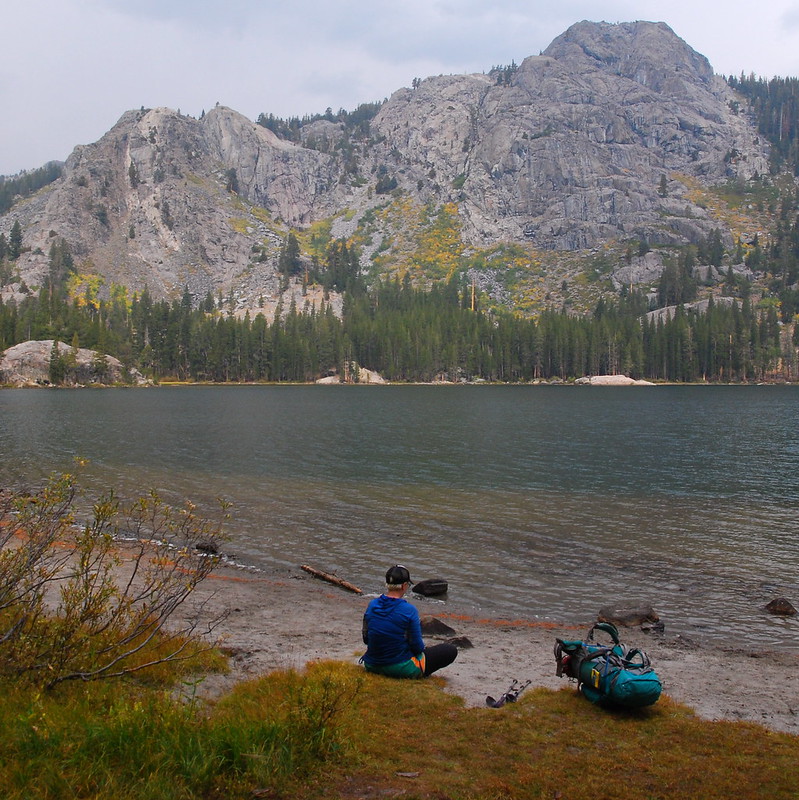 Those mounds in the distance are, I’m not kidding you, called the “Two Teats.” 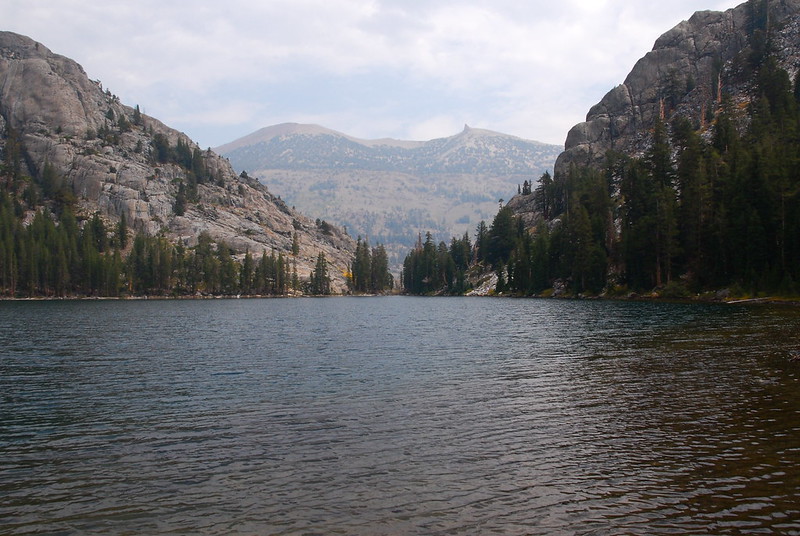 From Shadow Lake, the trail follows Shadow Creek up through the most beautiful stands of old juniper trees. And it starts to rain. The smell of warm wet rocks and musty juniper is almost too nostalgic to explain – like the Three Sisters when I was a kid, but more than that too. The smell of the evening drinks my parents had when I was growing up, and of the drinks my brother and I would covertly make in high school. The smell of what I thought it was like to be an adult when I was still a kid. 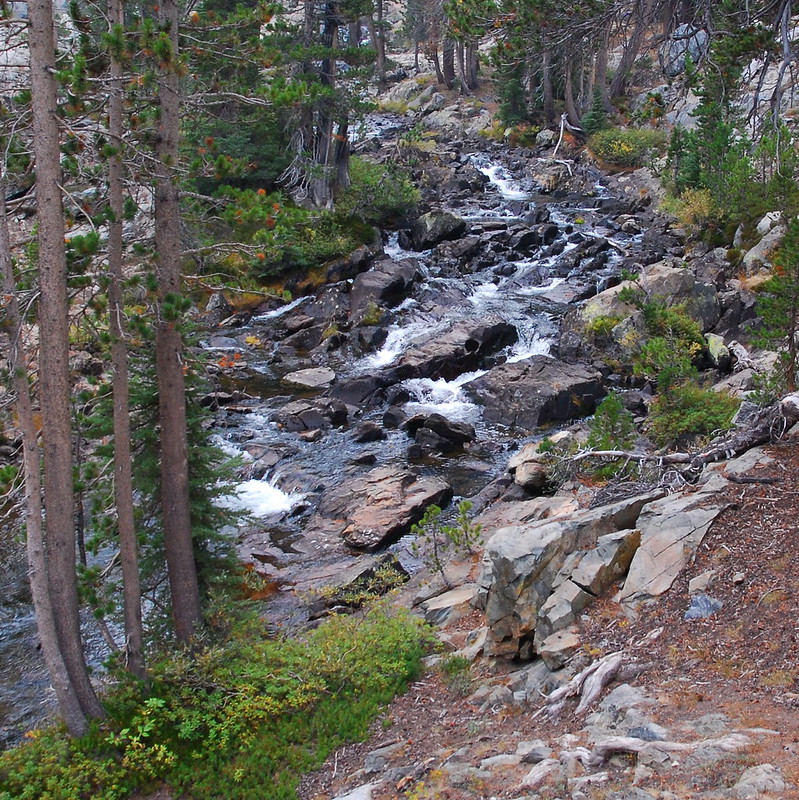 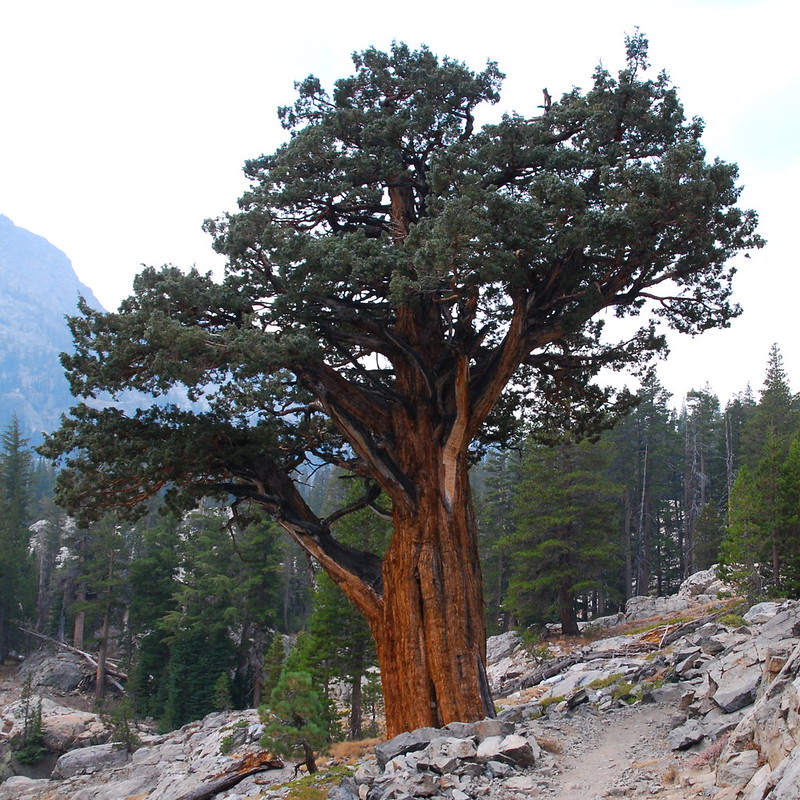 It starts to rain in earnest, and we scramble for rain coats and pack covers again. But then it’s gone again, leaving behind only a faint smell of ozone. There’s a storm coming, but it’s taking its time getting here. 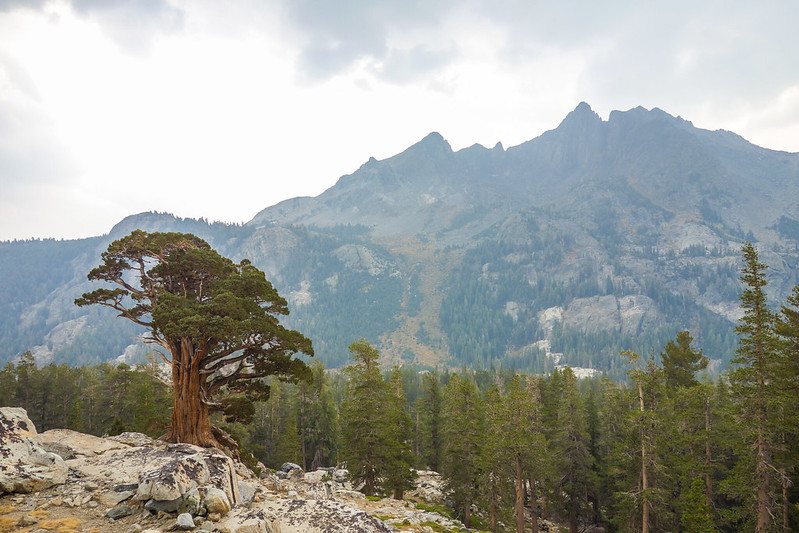 The trail continues to climb as it leaves the trees for a sort of rock gully, where we hear whistling marmots and whining pikas. We stop, very briefly, for pictures. 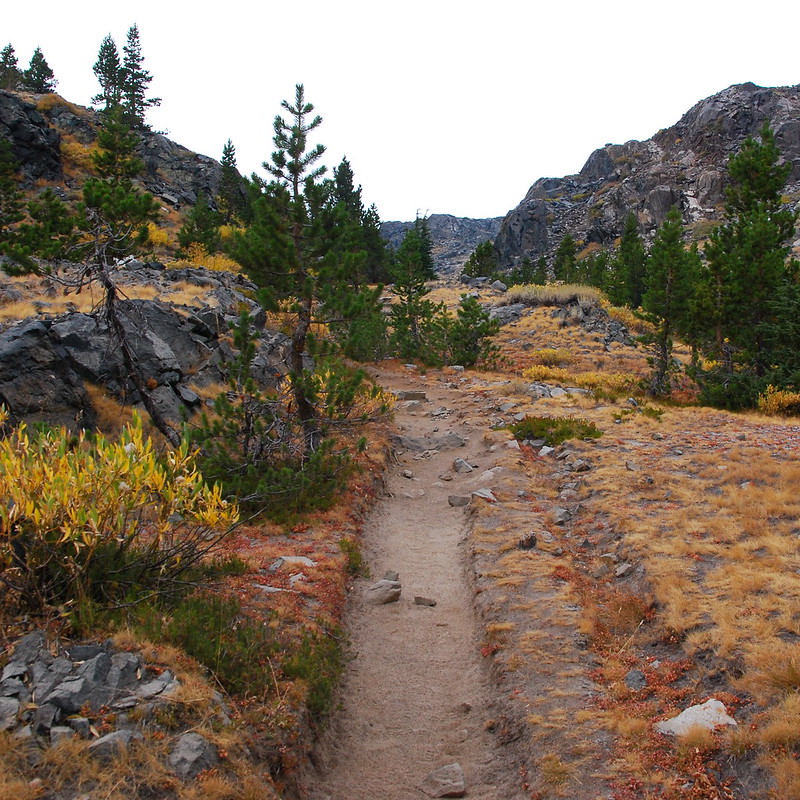 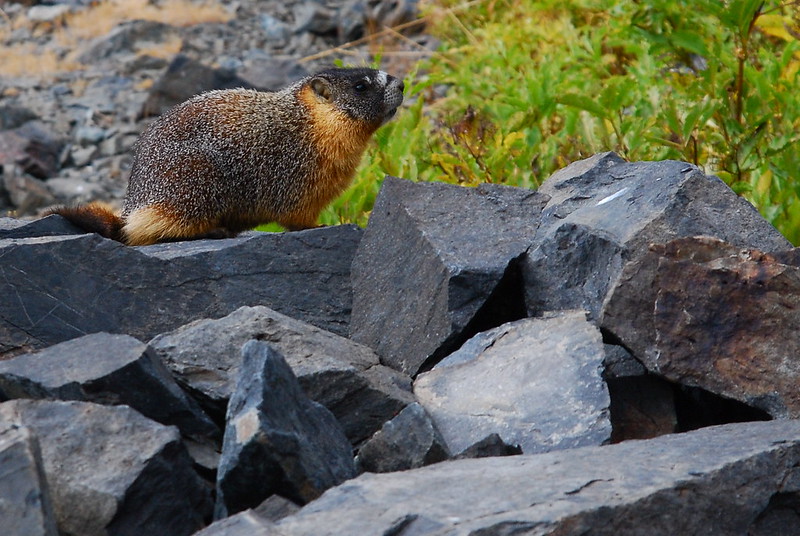 There’s a pass-like-thing at the top of the gully, where a large group of college kids sit, bragging about to the air about their exploits. But then there’s lightning in the distance, and it starts to rain again – more determinately this time. We speed down the other side, toward Garnet Lake to find a camp.

Most of the good camps at Garnet Lake are on the northeast side, beyond a footbridge that crosses the outlet creek. After following the northern shore west for a while, the JMT turns northward, but there’s a little side trail that continues west along the shore. If you’re ever there, follow it. It leads to magic. 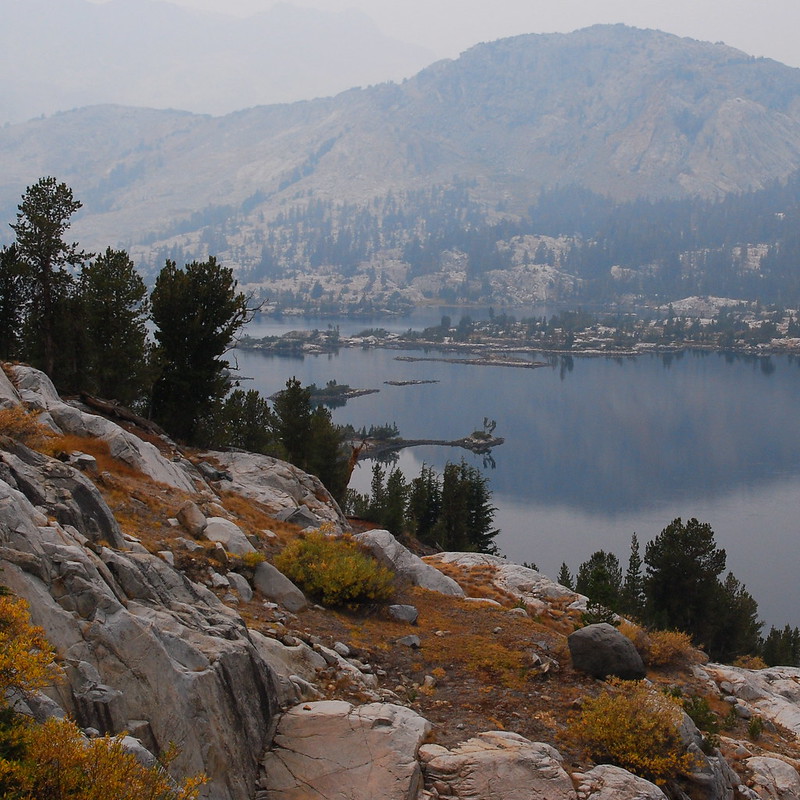 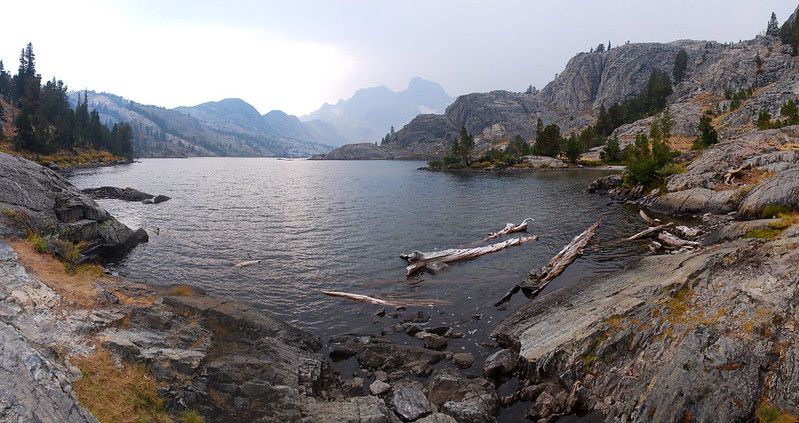 I go exploring while Krista waits by the JMT junction, and find the most wonderful spot with its own sort of jetty, jutting out from the shore toward a small, sheltered island. I leave my pack and run back for Krista as the rain picks up. 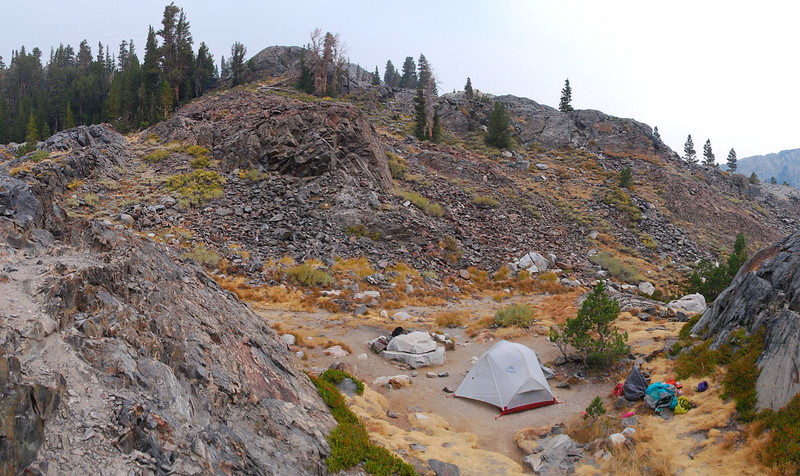 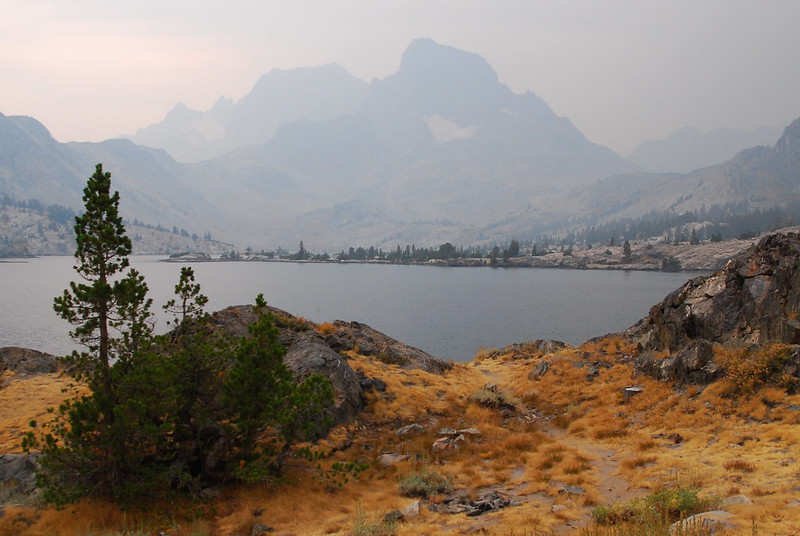 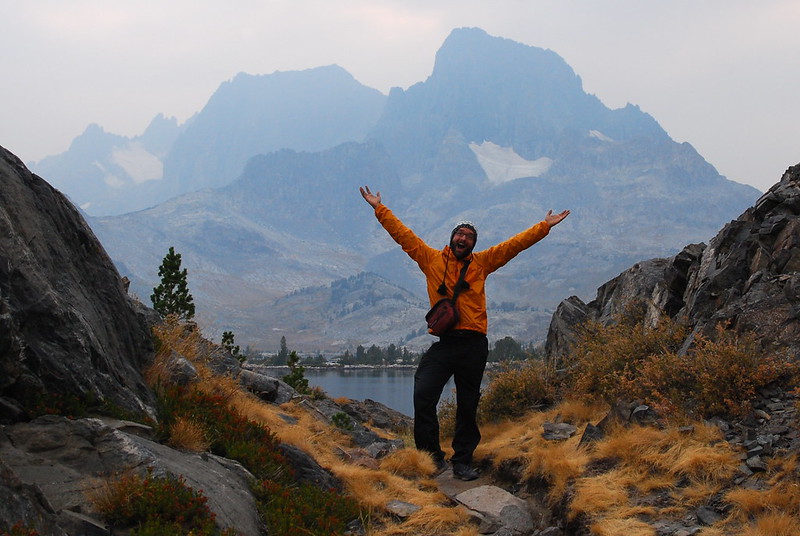 Just as we finish setting up, the rain suddenly gets hard, and we spend a pleasant hour in the tent, plotting what we’re going to eat when we finish in a couple days. Lebanese food! Curry! Barbecue! STEAK! PIZZA!

The thunderstorm passes as our stomachs are rumbling, but it never gets too close – there’s bright lightning, but it’s at least two miles away. Then it stops as suddenly as it had started, and we emerge to eat lunch and dinner in quick succession.

A few hours later, I sit alone at the edge of our jetty making tea, feeling a little melancholy. It’s been such an incredible trip – the sort of thing one only gets to do a few times in a life – and it’s ending. But then I think of home: our cats, our kitchen, the dissertation I’m just about finished writing. And then the trip expands outward in my mind, touching all of that. We’ve learned things – about ourselves, about each other, and about what’s really important in life – and those things aren’t going anywhere. Neither are the thousands of pictures we’ve taken.

Before we left, Krista said something about how nice it is to have a life that you miss when you go. And it’s true. I’m sad things are ending, but happy too to be coming home, and to be bringing a lot of this with me. 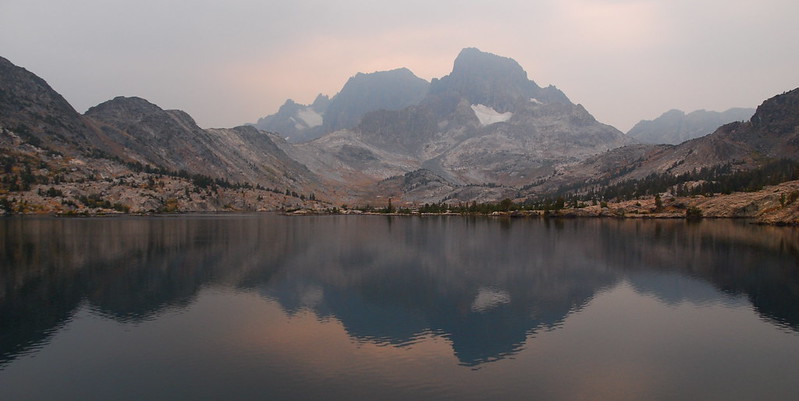