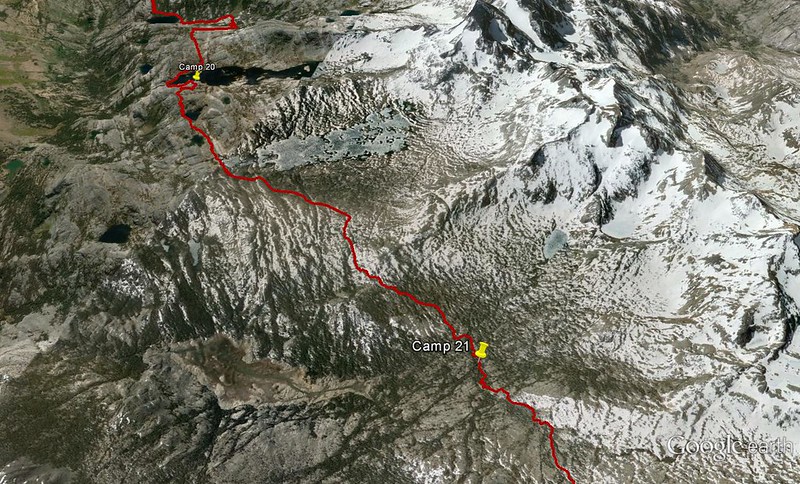 As we were climbing out of Devil’s Pospile the other day, someone told us that we had to see the sunrise over Garnet Lake. So I wake up earlier than I  need to and stumble out onto our dark jetty to see the show. It’s phenomenal.

As the sun rises I use the camera’s zoom to see the small nooks of Banner Peak and the Ritter Range. So much to explore, if we only had the time! There are glaciers up there, with unseen streams and unseen lakes. Climbing routes, a few bodies. 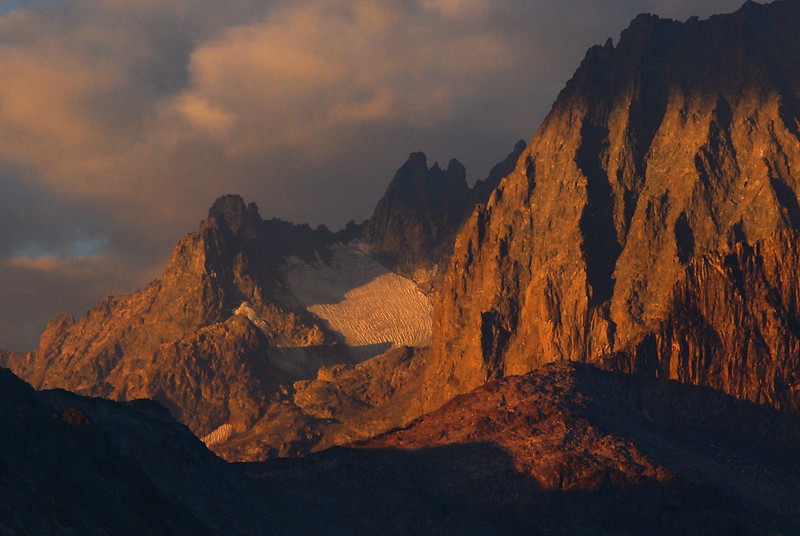 Banner Peak was named by a USGS topographer in the late 19th century after a banner cloud he saw streaming from the summit. I’ve seen banner clouds before – they look like, well, banners being pulled along in the lee of sharp peaks – but I don’t understand at all how they happen. Apparently it’s the same phenomenon that leads to condensation trails forming in the lee of airplane wings in the fog.

Krista stumbles out an hour later, and we ramble around our jetty taking more pictures and making breakfast. The second to last of our trip! I eat very slowly. 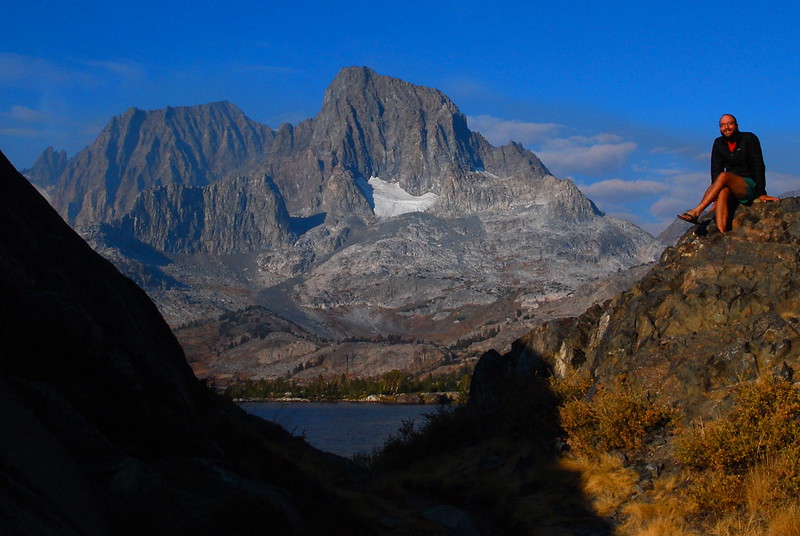 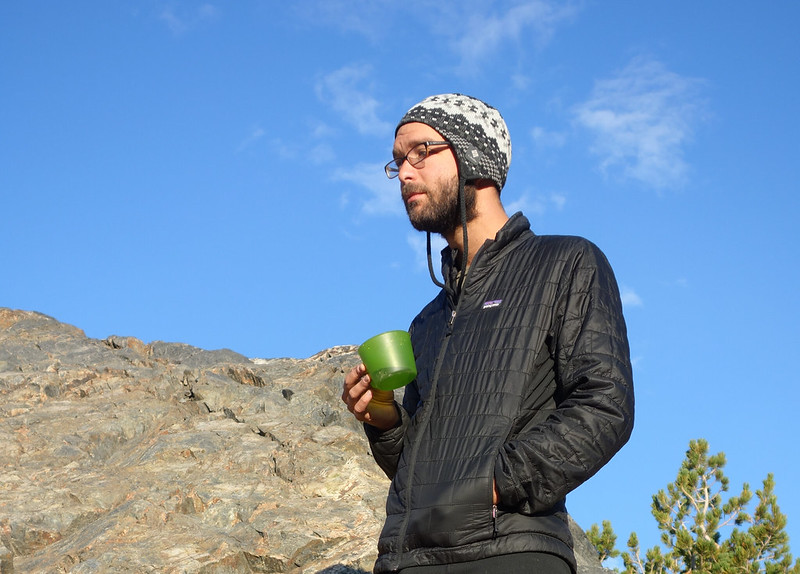 We eventually pack up – slowly, again – pull ourselves away from the lake, and continue north. 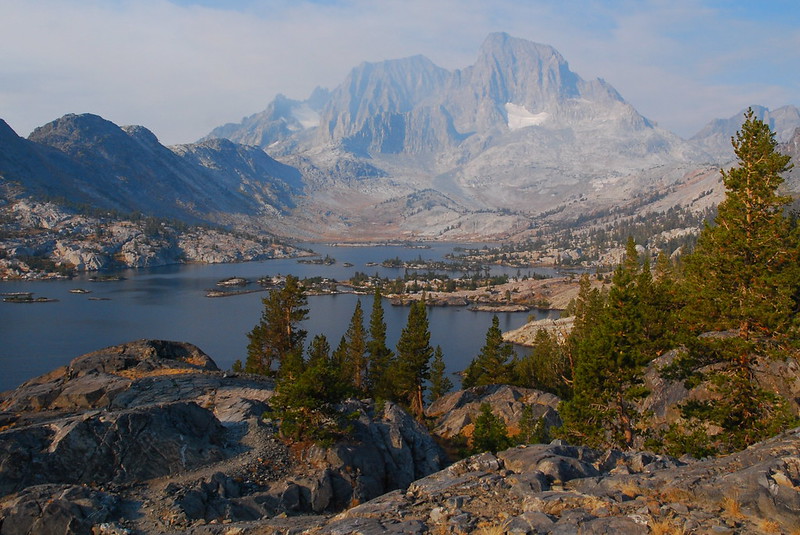 There’s a short climb, where we meet several hikers who ask us to pass messages to people behind them. “Tell her I hope she did okay in the storm.” Apparently the rain yesterday was much worse a few miles north of us – several inches, and close lightning. People got split up, hunkered down wherever they happened to be when it started. Huh.

Everyone seems accounted for today, though, and we descend down to more lakes. Here’s Emerald: 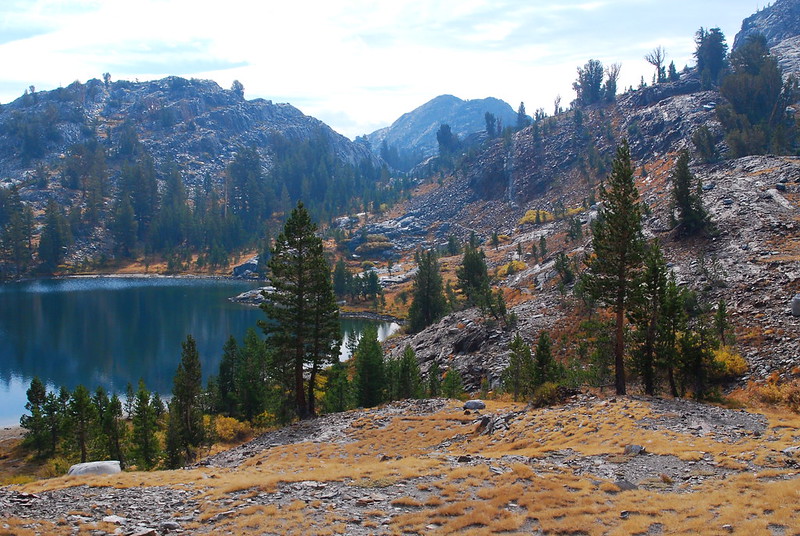 We stop on the shore of Emerald Lake to talk to a guy who’s apparently just left Yosemite this morning. He tells us that another big storm’s supposed to be coming in this afternoon, in just a few hours.

The sky’s still bright blue, but as we walk down to Thousand Island Lake, it changes, almost immediately, to dark grey, and the wind begins to howl. We decide to hold off on breakfast for a bit. 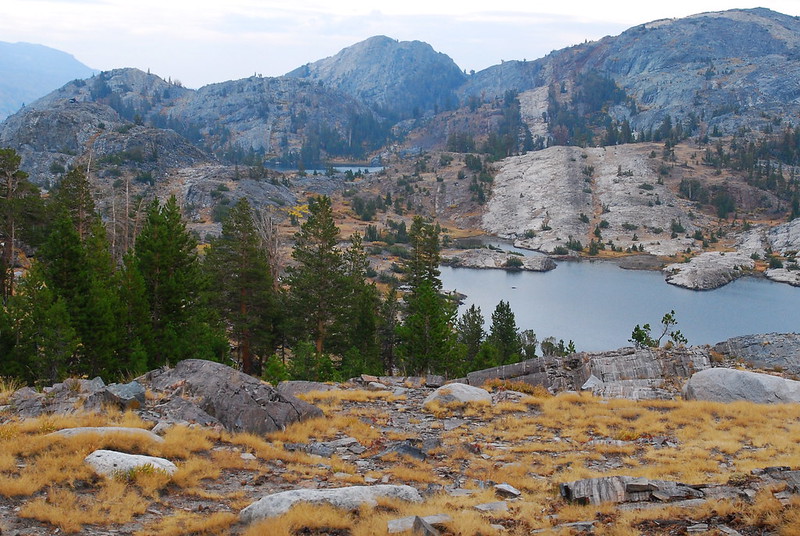 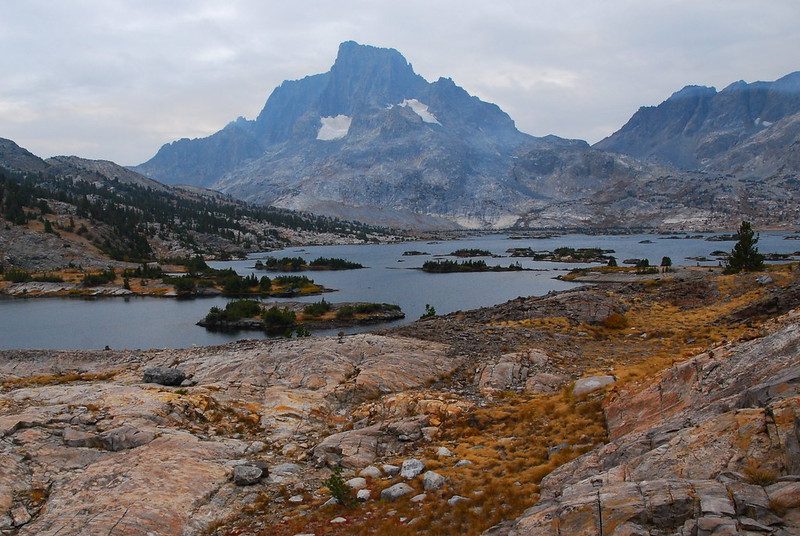 As we near Island Pass, it starts to rain – softly at first, then persistently more driving. We pass a USFS trail crew, all already in heavy ponchos. “Something’s coming!” 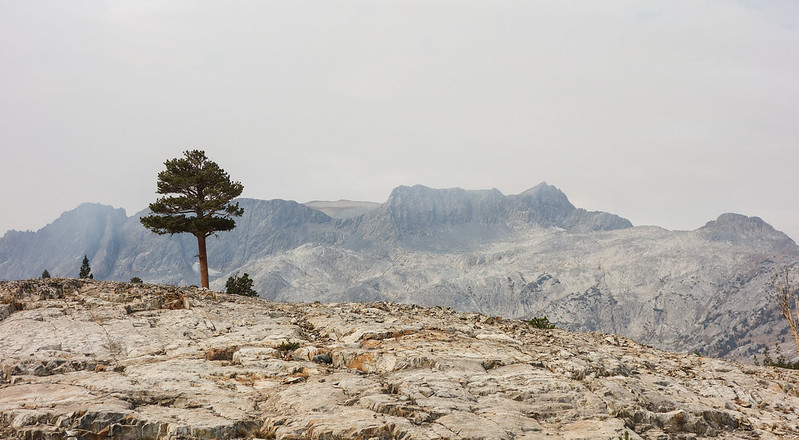 Descending down to Rush Creek, the storm starts for real, and we pass several deer who seem to be looking for shelter. 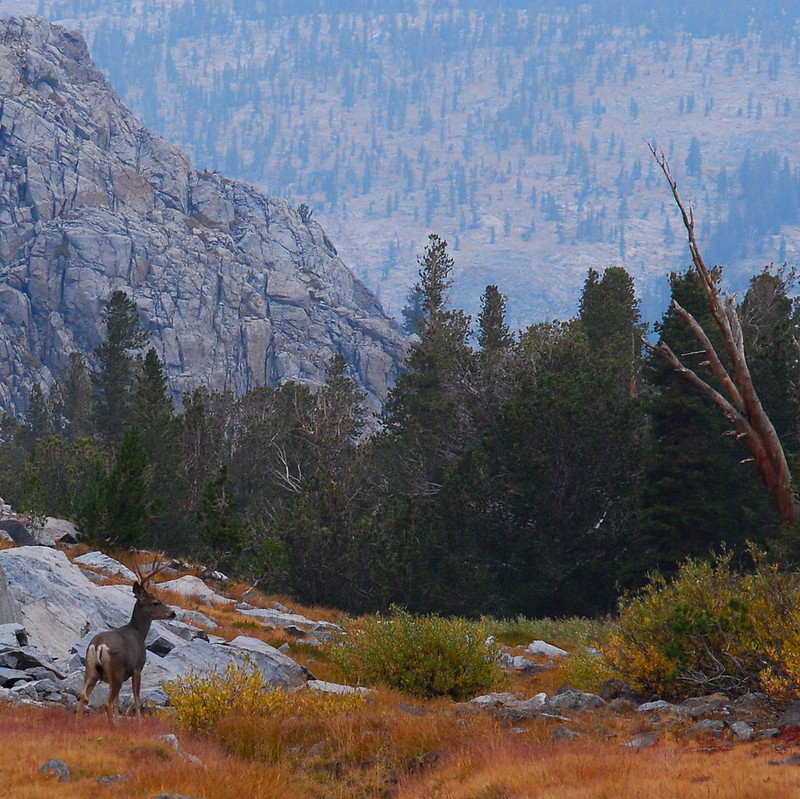 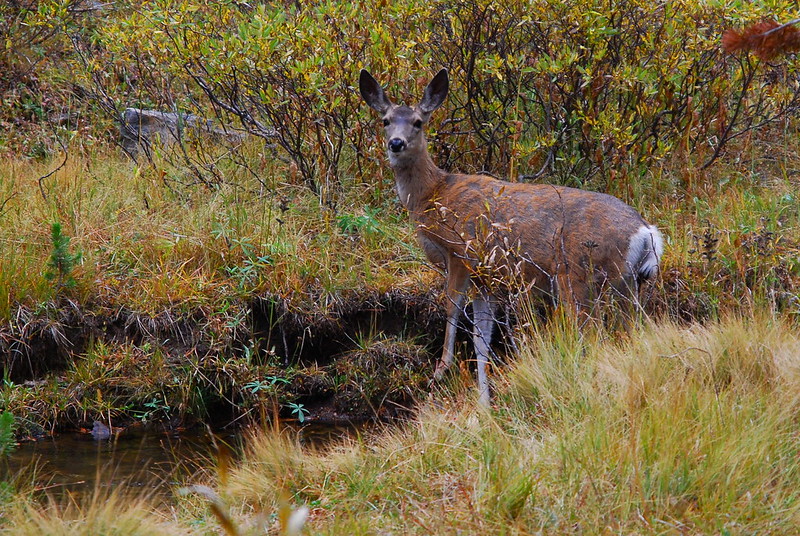 Although it’s quite a ways from where we’ve planned to camp, we quickly set up our tent in a grove of trees near one of the forks of Rock Creek and get in. It starts to pour – probably three-quarters of an inch in half an hour. The tent, an MSR Hubba Hubba, handles it magnificently, even as a river forms under our floor. 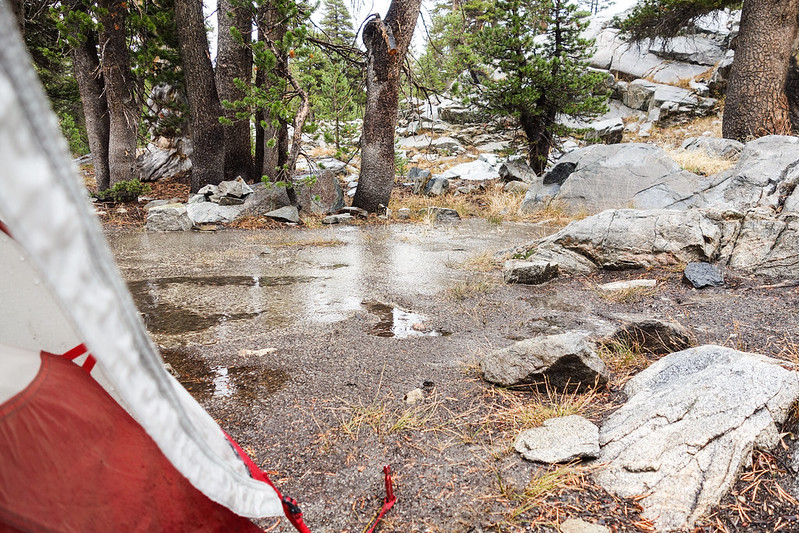 We initially plan to wait out the storm for a few hours then continue on, but it doesn’t really pass, and we decide to just stay here for the day and deal with the long walk out tomorrow when the weather will hopefully be a little better. It starts to snow.

There’s a sheltered spot near camp between two pines, and I set up a sort of kitchen there to make us a very late breakfast. We eat in the tent, then use our cups to dig trenches and bail water. “Alpha Trench has been breached!” 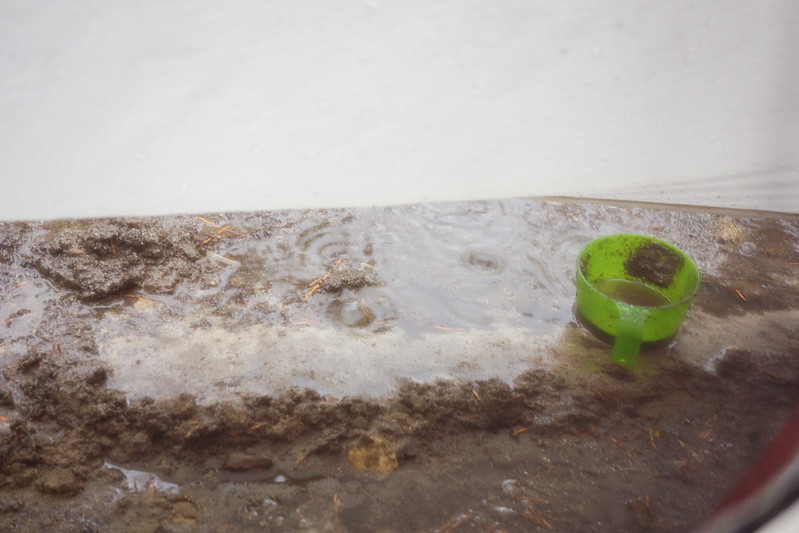 Krista’s always amazing in these situations. We spend the afternoon laughing, writing notes to ourselves about the trip, looking at the thousands of pictures we’ve taken, eating candy, and braving the rain to pee. It’s sort of funny to spend our last full day on the trail hiding in our tent, but it also somehow feels appropriate.

In the evening, things clear enough for me to return to our little kitchen in the trees and make mac and cheese – the same thing we ate on our first night on the trail, altitude sick at Chicken Spring Lake. I’m a sucker for that sort of thing.

As the water begins to steam, and the steam begins to mix with the evening fog in the gathering dark, I look up at the icy trees, and think of something John Muir wrote in the margin at the end of his edition of Emerson’s essays:

“Between every two pine trees there is a door leading to a new way of life.”

One thought on “JMT, Day 21: Between Every Two Pines”