This is the second of two entries on hiking around the St. Helens blast zone wildflowers this spring. For the first, on a hike from Johnston Ridge Observatory to Loowit Falls and beyond, go here. For the second, on a hike from JRO to the top of Coldwater Peak… keep reading.

This one will be mostly pictures: the hike is justifiably very popular, so I won’t spent much time talking about the route or anything like that. But if you need directions, the WTA’s got a wonderful set.

There’s a special sort of magic in starting late. We’re used to leaving before dawn, half sick for sleep, and arriving at our trailhead hours before we’d usually be up. And it’s always worth it. But sometimes it’s nice to wake up at the normal time, meander around coffee and breakfast, and get to hiking when you get to it.

So I wake up at nine or something, and my buddies pick me up maybe an hour later. It takes two hours to get to the north side of St. Helens from Portland, which means we won’t be to the trailhead until around noon, but whatever. The days are long now. It’s magic.

We get to Johnston Ridge around noon, and the place is like Disneyland: there’s a food stand in the parking lot selling volcano-themed burgers, and a thousand people milling around the lot, wearing the sorts of lifestyle cotton clothes REI sells to people who want to look like they go outside.

Everyone’s in the Observatory, crowded around scale models of the mountain. Something about Exactitude in Science. Or maybe one of Lewis Carroll’s last books:

“That’s another thing we’ve learned from your Nation,” said Mein Herr, “map-making. But we’ve carried it much further than you. What do you consider the largest map that would be really useful?”

“About six inches to the mile.”

“Have you used it much?” I enquired.

“It has never been spread out, yet,” said Mein Herr: “the farmers objected: they said it would cover the whole country, and shut out the sunlight! So we now use the country itself, as its own map, and I assure you it does nearly as well.”

We buy our access bracelets and meet in the only open space, by the windows. As we leave, there’s a line of people buying framed photos of the view.

I don’t take many pictures for the first couple miles, as we follow the familiar trail east across Johnston Ridge and Devil’s Elbow, across The Spillover and the western flank of Harry’s Ridge, and up the broad, bumpy ridge that separates St. Helens Lake from the Coldwater Creek drainage. But I stop halfway up to look back at the mountain, and east across Spirit Lake toward Mount Adams. That view! I’ve seen it a dozen times, but it still somehow seems sort of impossible. 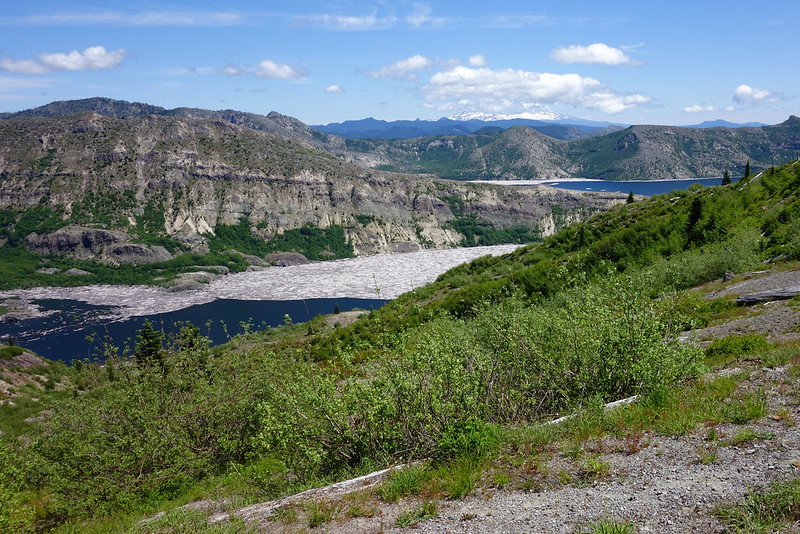 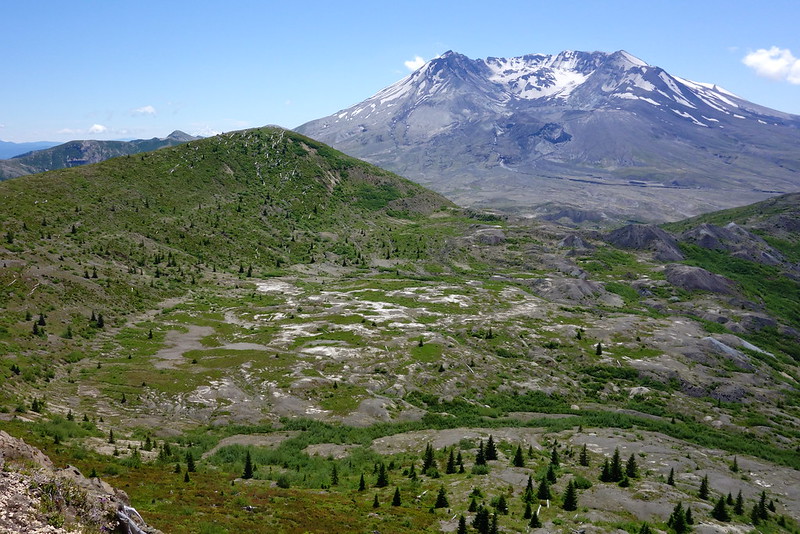 We crest the ridge and cross over toward St. Helens Lake through a massive natural arch that would probably seem precariously if it weren’t so damn big. I make my buddies pose for a half dozen pictures – I’m getting to know a new camera, a smaller one for the PCT – and they gamely stand still as I fiddle with a bunch of controls I don’t understand. 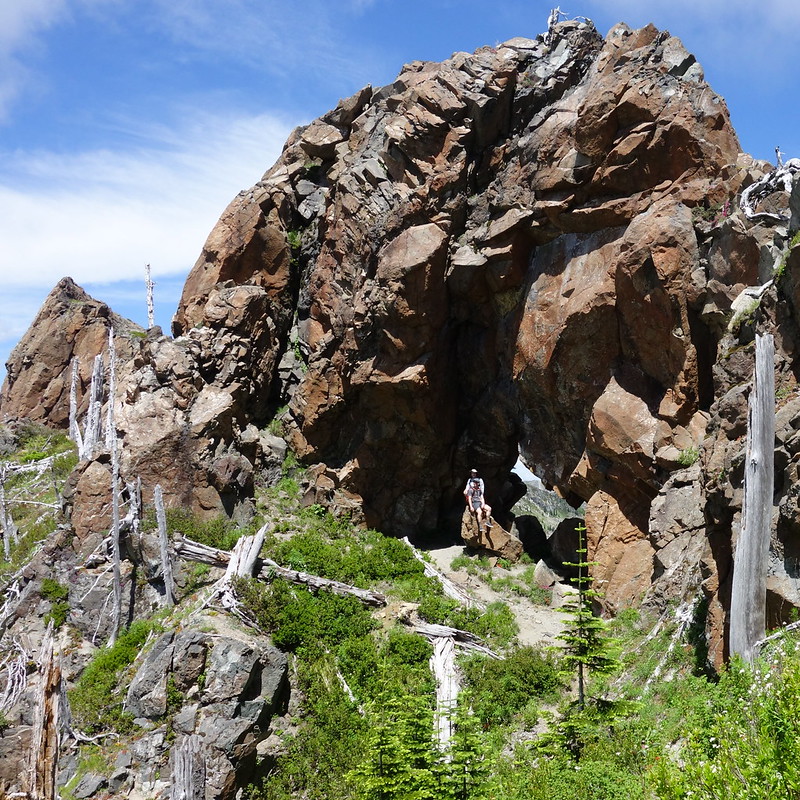 Then it’s down the ridge to a broad saddle overlooking St. Helens Lake, where there’s still a large snow field, slowly melting in the early afternoon sun. 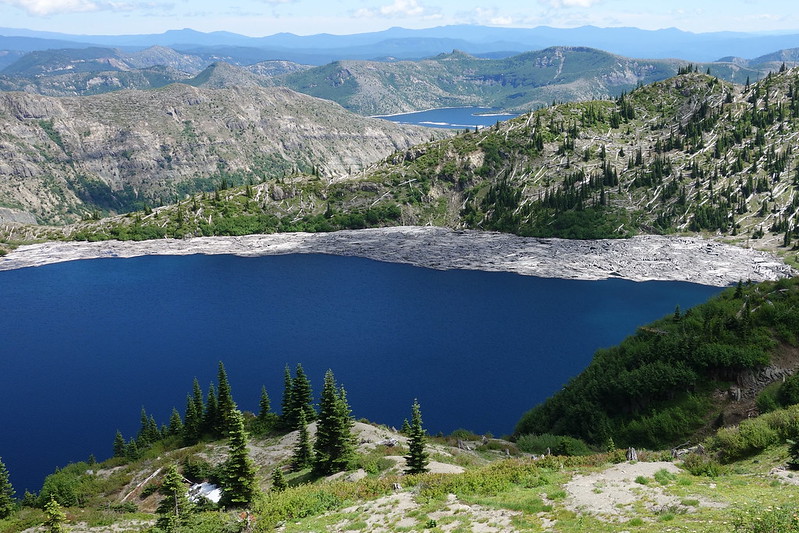 From the saddle, we can see Coldwater Peak’s terraced southern slope, so regular it almost looks artificial, and, in the other direction, the looming figure of St. Helens, clearer than a postcard. We spend a while just staring. 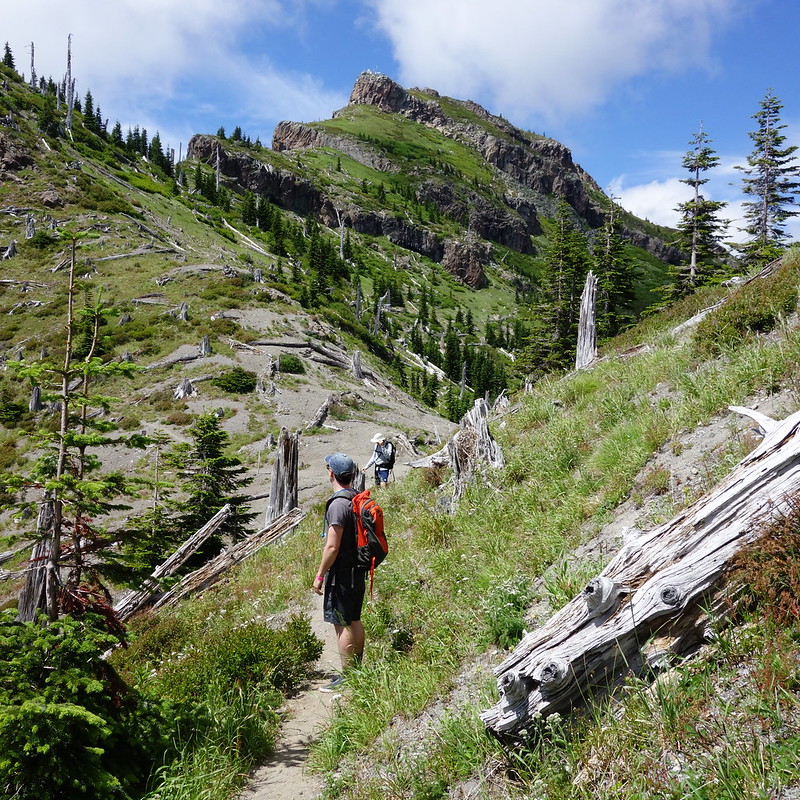 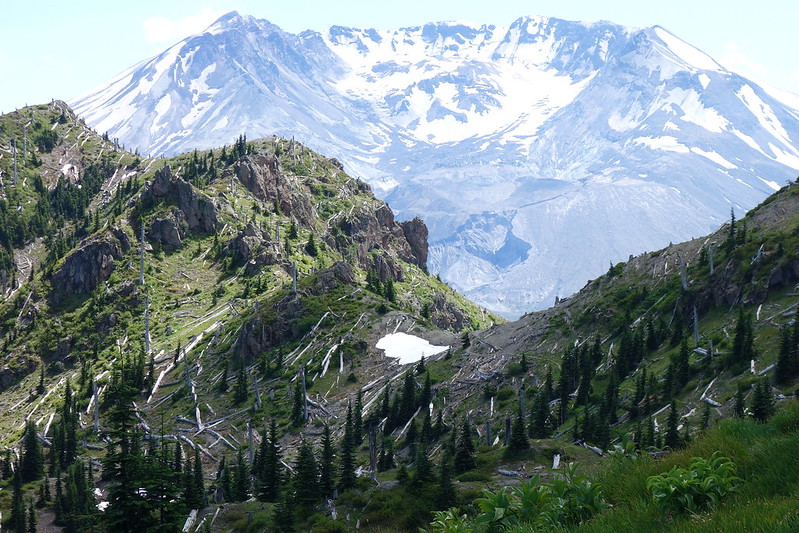 As we leave the Boundary Trail and begin ascending Coldwater Peak in earnest, the other Cascades peek over the horizon to say hello. 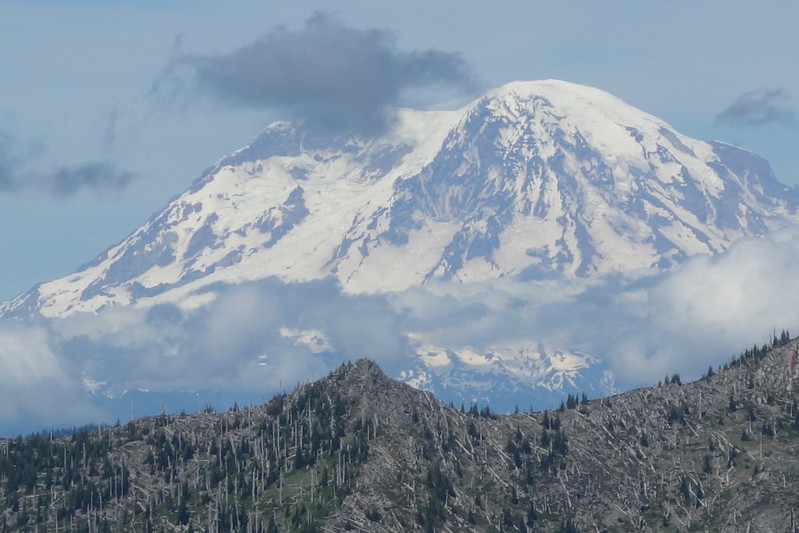 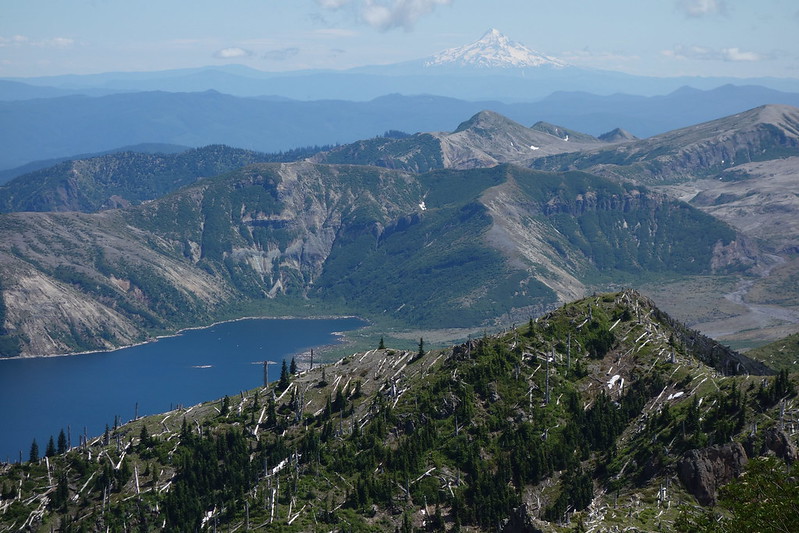 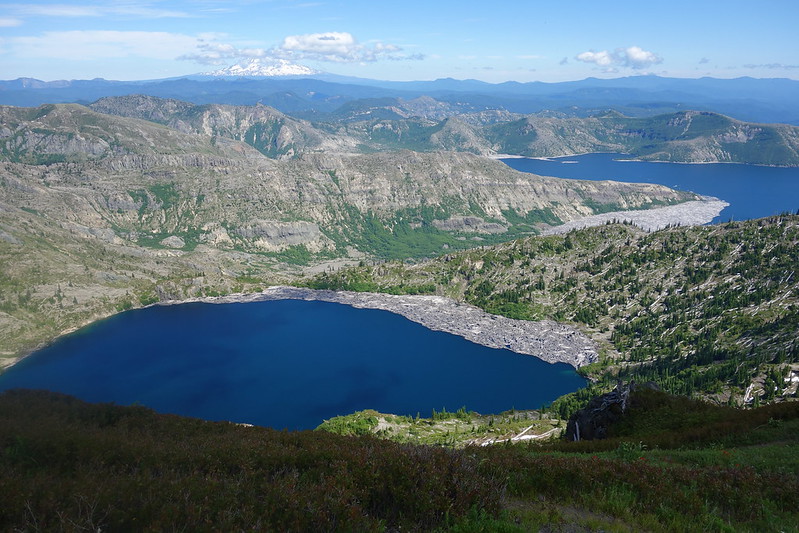 We’re on top before we know it, and somehow have the place to ourselves, so we sit on the summit block for lunch and beer, staring down in every direction at the lakes and rivers and valleys that seem to all radiate from our central peak. We spend an hour up top eating and drinking and playing King of the Hill. 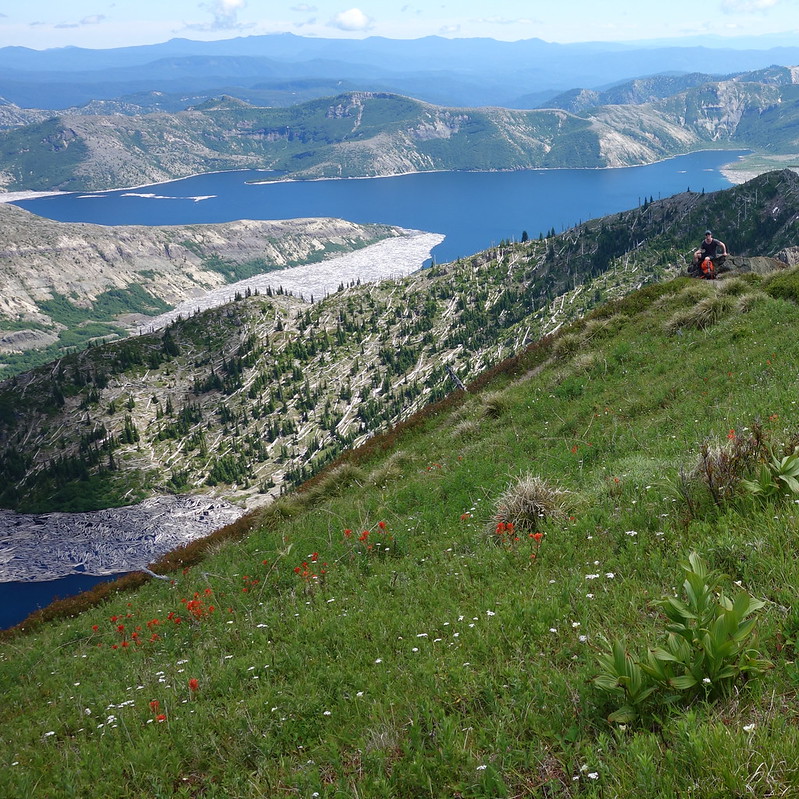 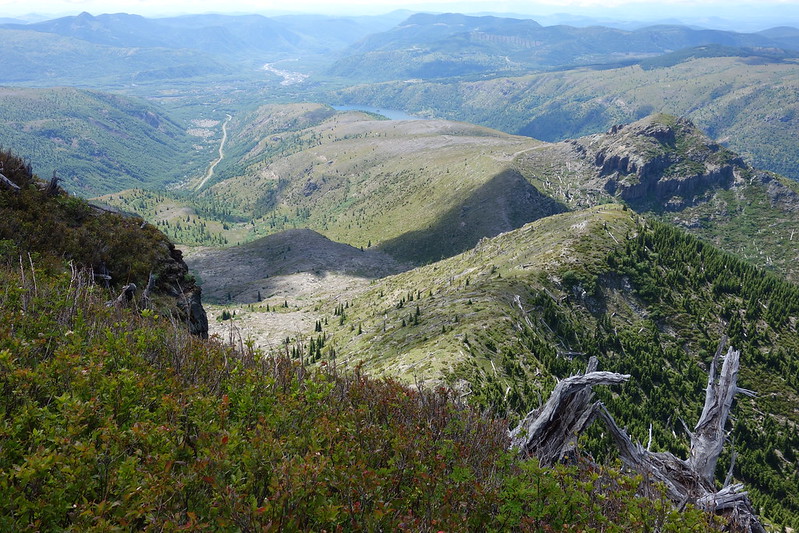 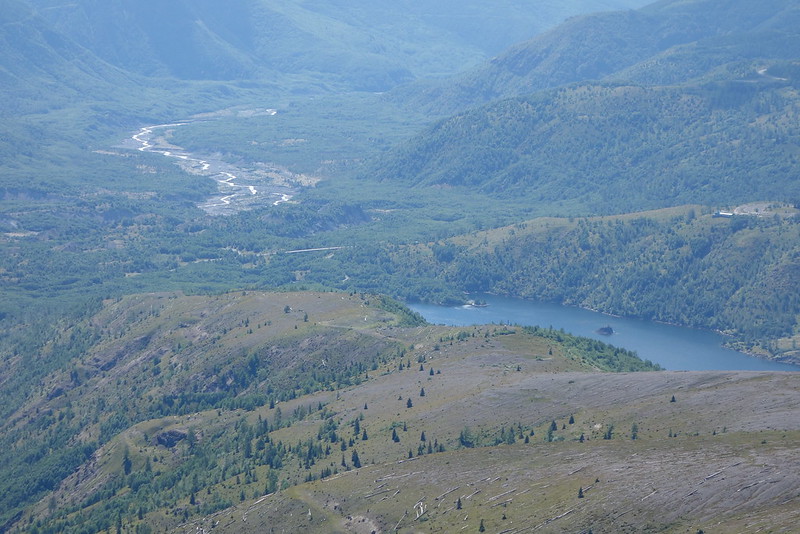 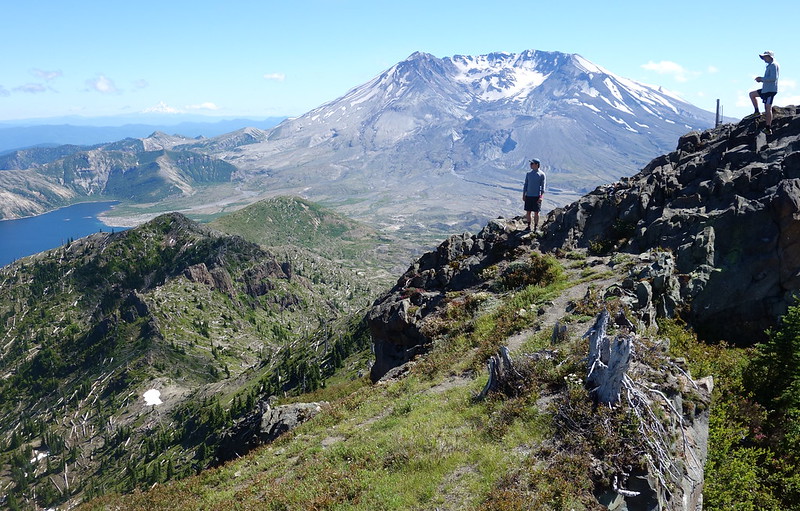 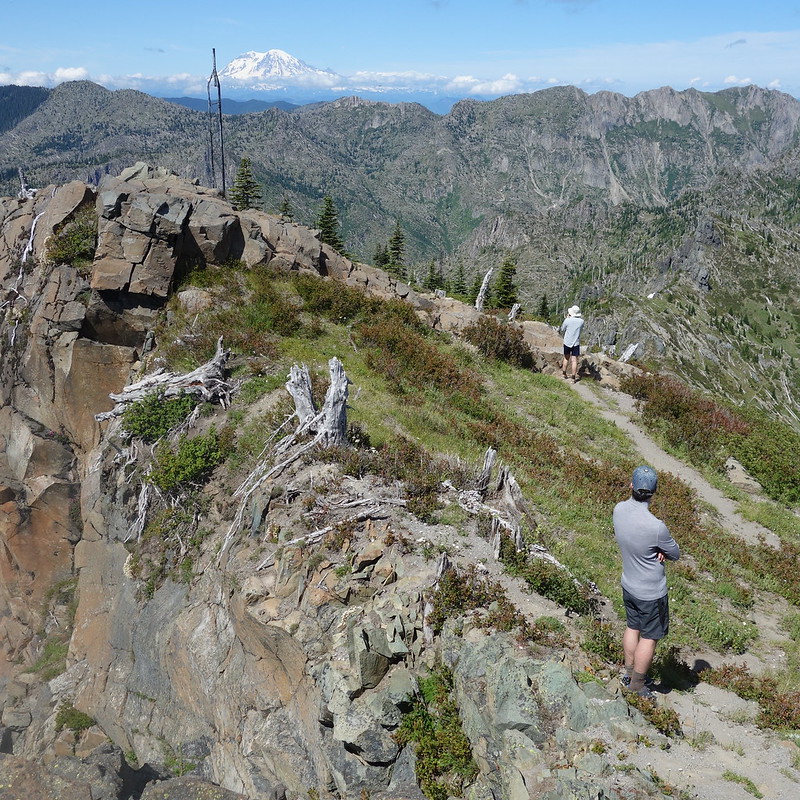 We start down as the sun begins to mute for the evening, and follow our tracks back to the Boundary Trail, to the saddle, to the arch, and finally away from St. Helens Lake to The Spillover, which has become dusty in the afternoon heat. 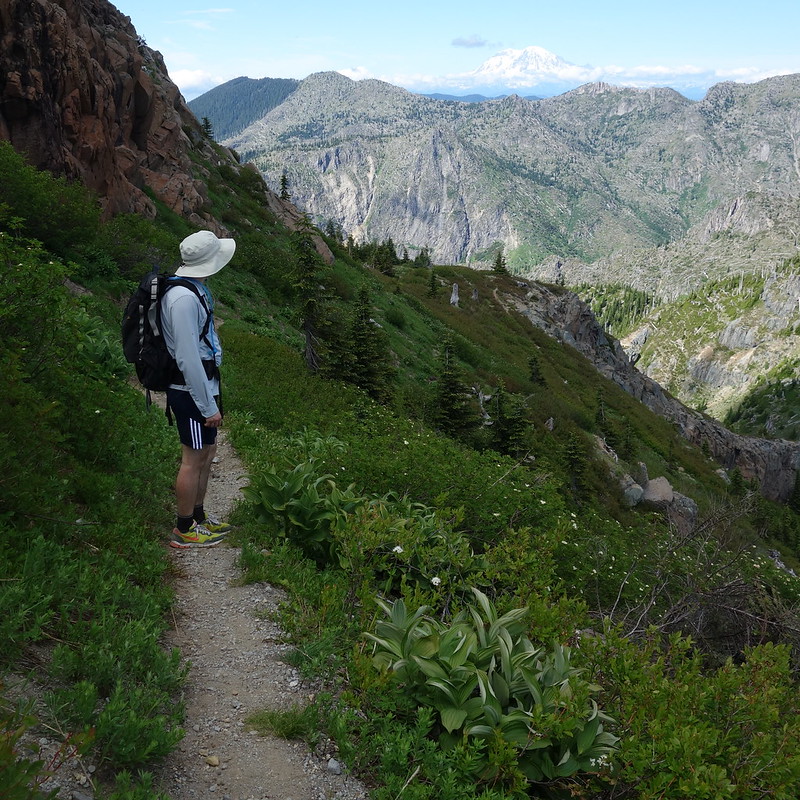 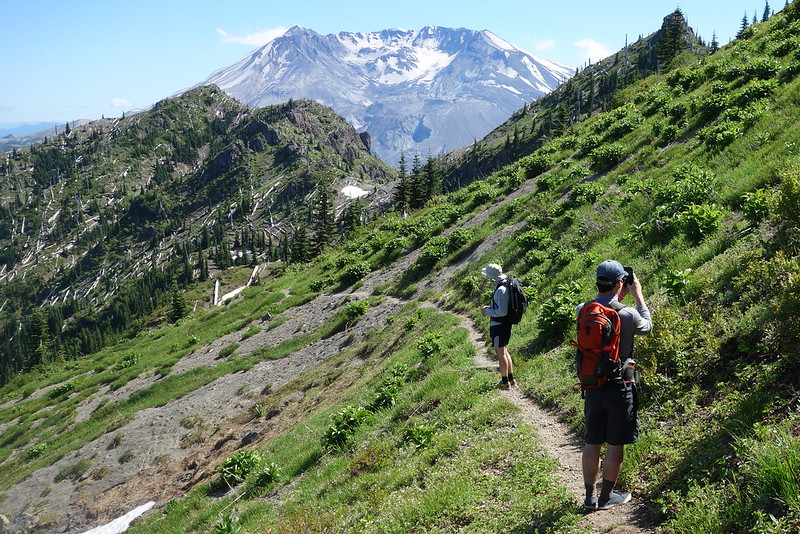 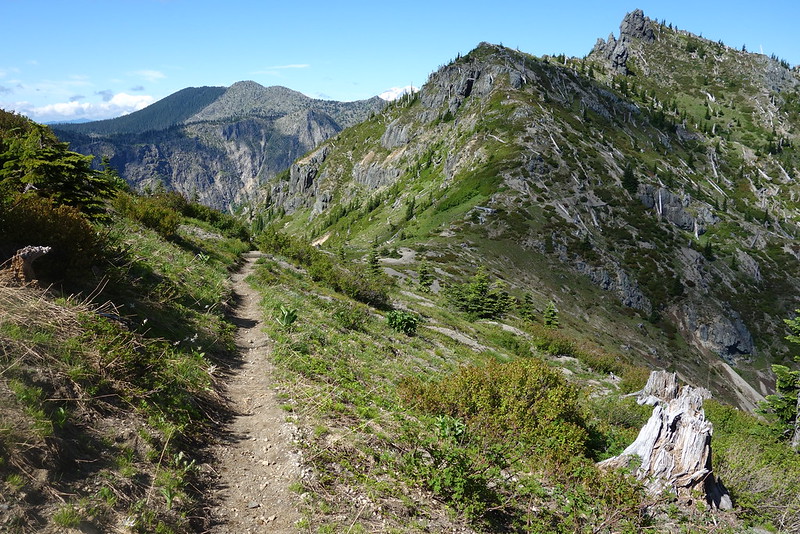 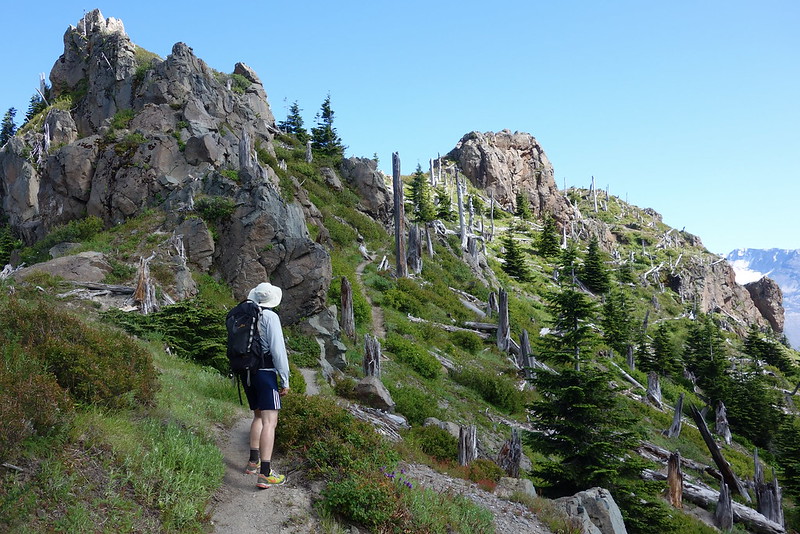 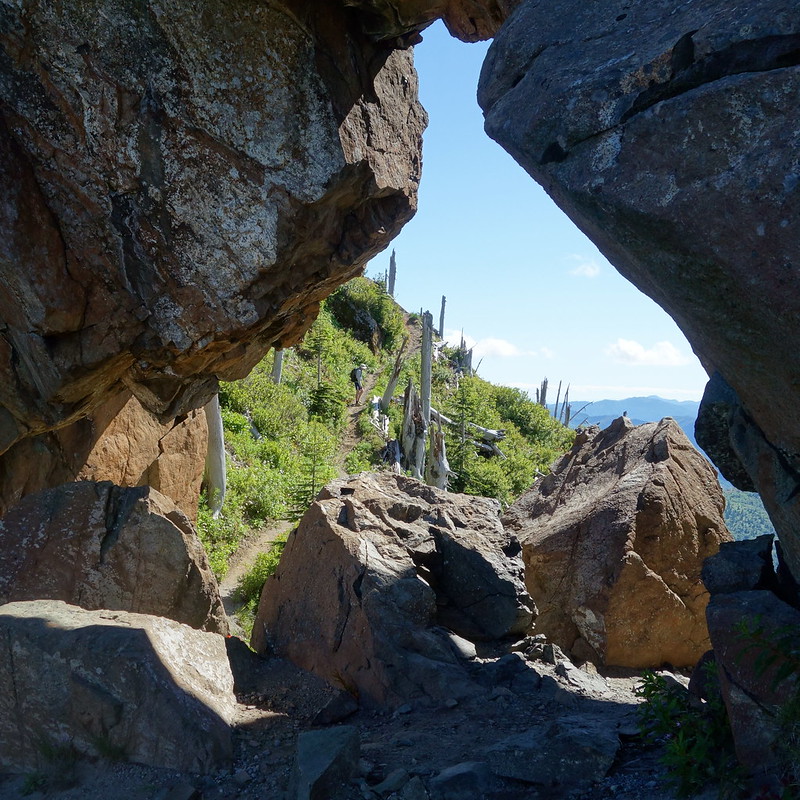 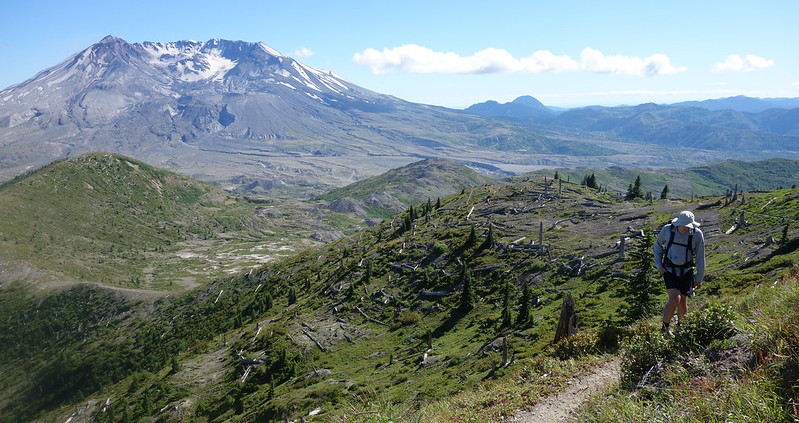 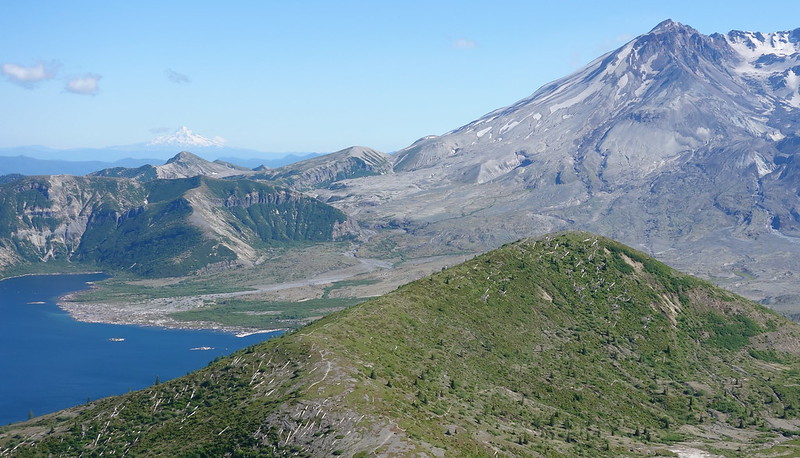 As we near Johnston Ridge, the trail gets more and more crowded with hikers out for small strolls from the observatory, bent over to take pictures of the flowers. And I join them, trying, and failing, to capture some of the grandeur of an entire ridge turned red by blooming paintbrush. 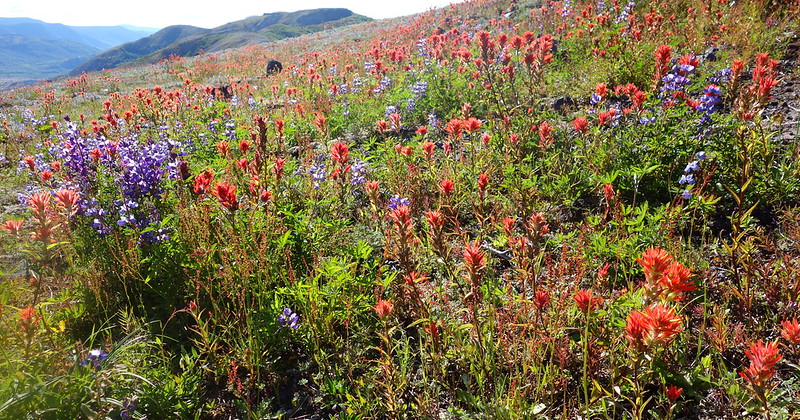 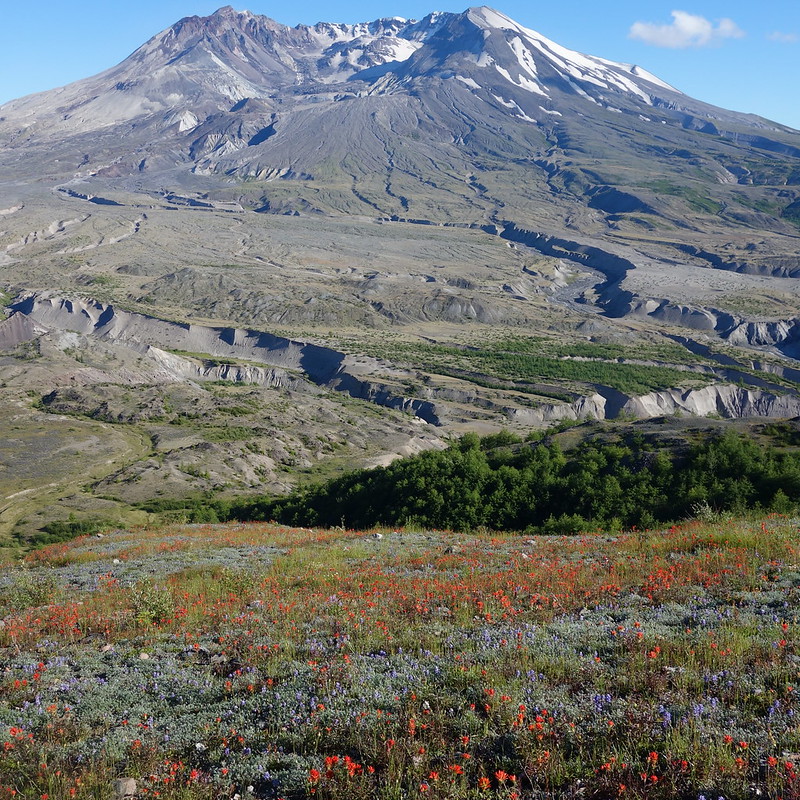 We’re back at the car before even the first flickers of sunset. It feels a little strange to have started so late and be finishing so early. But as we drive away, down from the Observatory to Coldwater Lake then back up, as the highway traverses high above the Toutle River, I think that there’s some magic in this, too – to seeing the sun set from home.