The elk came back! It felt like I’d only been asleep for five minutes when I heard splashing again. It was dawn, the sun was just beginning to creep over the rocky ridge above me, and my friend was back for a morning bath. Part of me wanted to run out and see him again, but a much bigger part of me wanted to just keep sleeping, and so I did, for another couple hours, until the day’s warmth roused me from the tent.

I was excited to get up into the high Goat Rocks, so I left without breakfast, and didn’t stop for a few miles, until I got here, to Walupt Creek, a fast, cold, clear stream where I’ve been sitting for a while. Sitting with my feet in the water, drinking coffee out of the lid of my Jetboil, I feel for the first time truly comfortable with where I am.

I remember a similar feeling on the JMT last year, a few days in, when suddenly all the strange discomforts of wilderness life felt normal.

A big group came by a few minutes ago—two women in front, three limping dudes in back—trekking from Snoqualmie Pass to somewhere a little south of here. They asked how long I’d been out, and I had to think for a bit. “Uh… I don’t know. A while?”

From Walupt Creek, the scenery became spectacular, as the high Goat Rocks began to loom over a coming pass, and views of Adams and St. Helens opened up to the south. 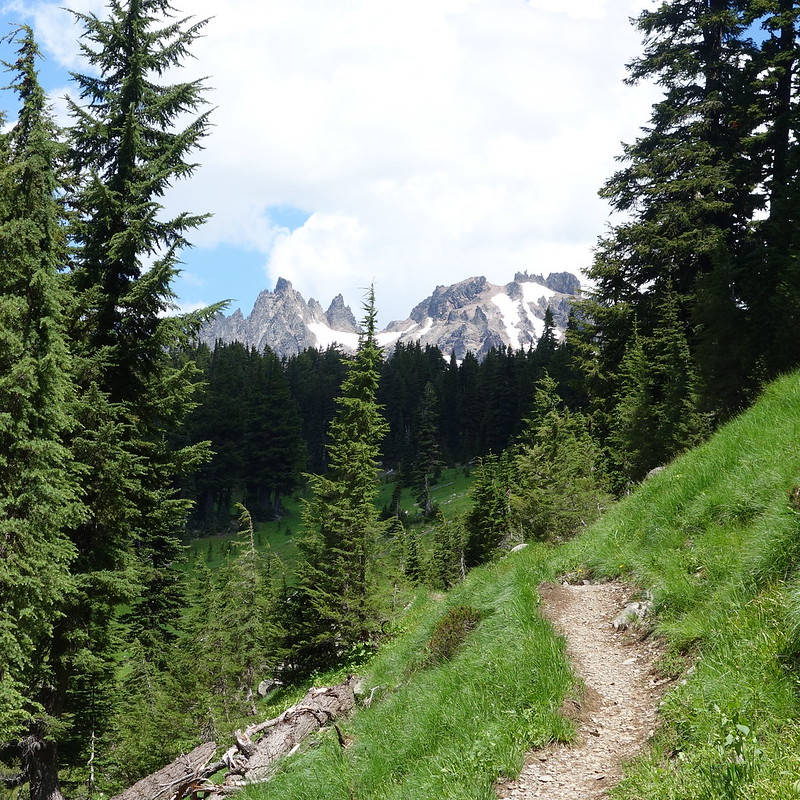 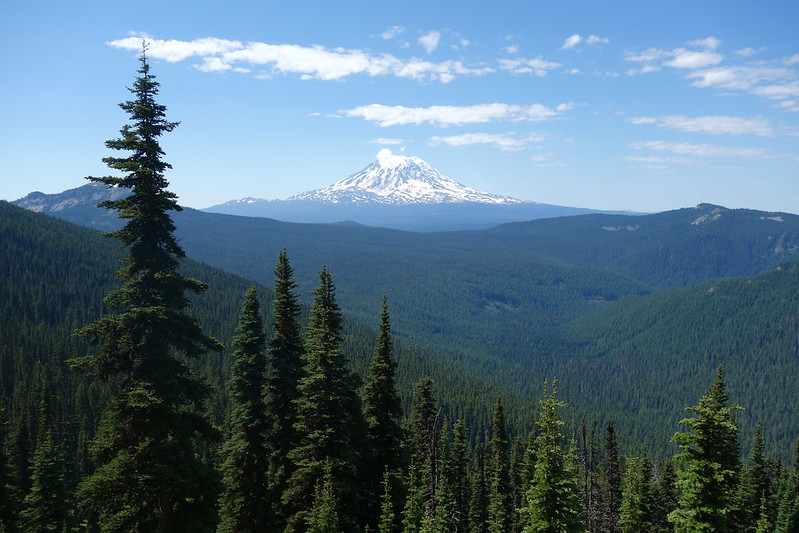 As I crested the first pass and briefly entered Yakama land, I was so overtaken with the view—the headwaters of the Klickitat River and the eastern edge of the Goat Rocks—that I had to sit down for a bit and just stare. 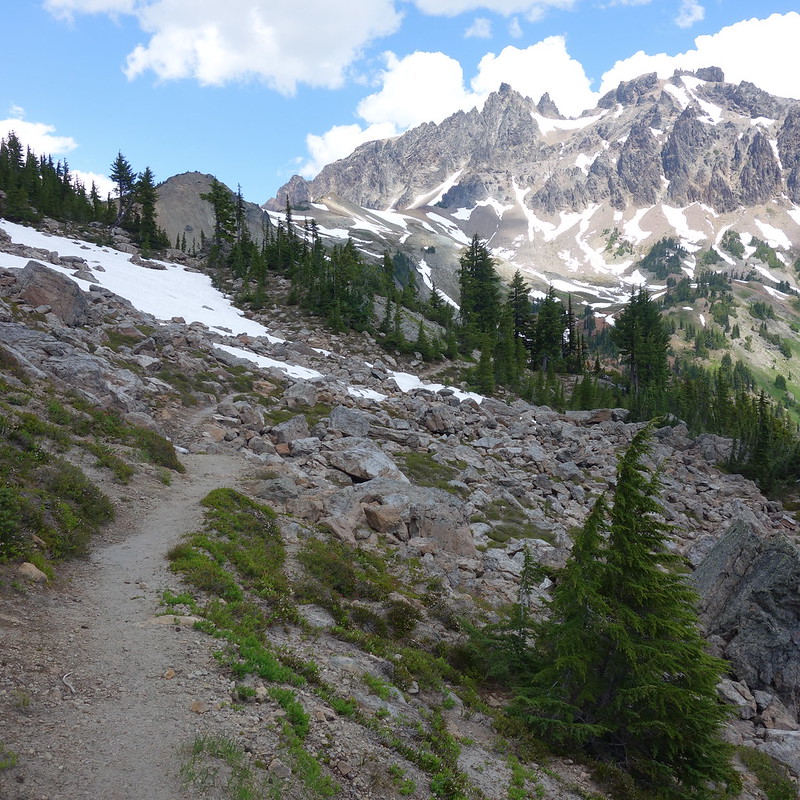 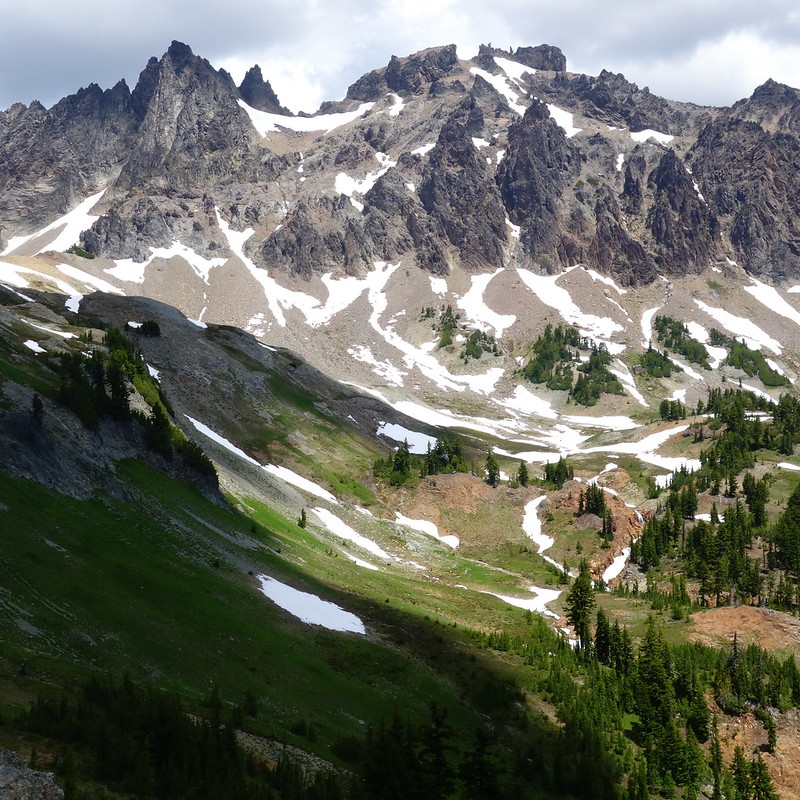 I took the trail slowly, trying to savor every step, but too soon I was nearing Cispus Pass, and the end of the basin. I could have spent a whole day on that mile of trail, only taking a step every few minutes, and taking a dozen pictures each time.

But of course Cispus Pass gave way to its own delights, as a hundred snowfields melted to form a dozen streams that in turn joined to form the Cispus River. 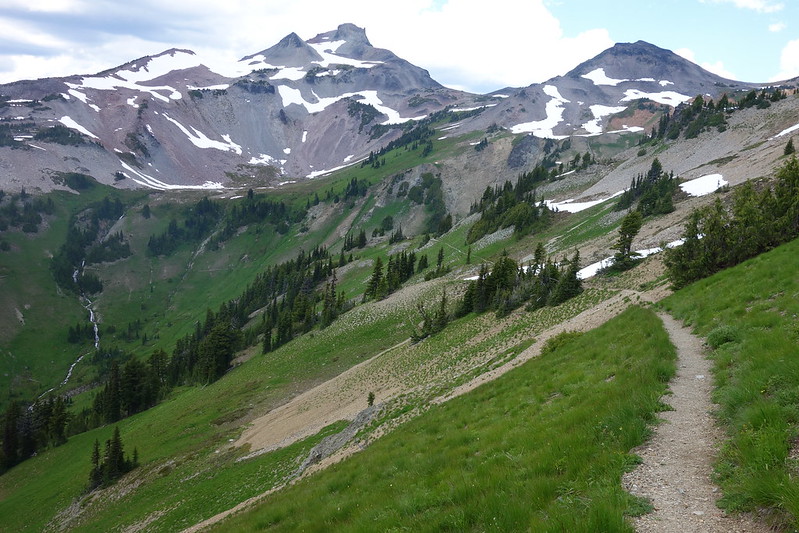 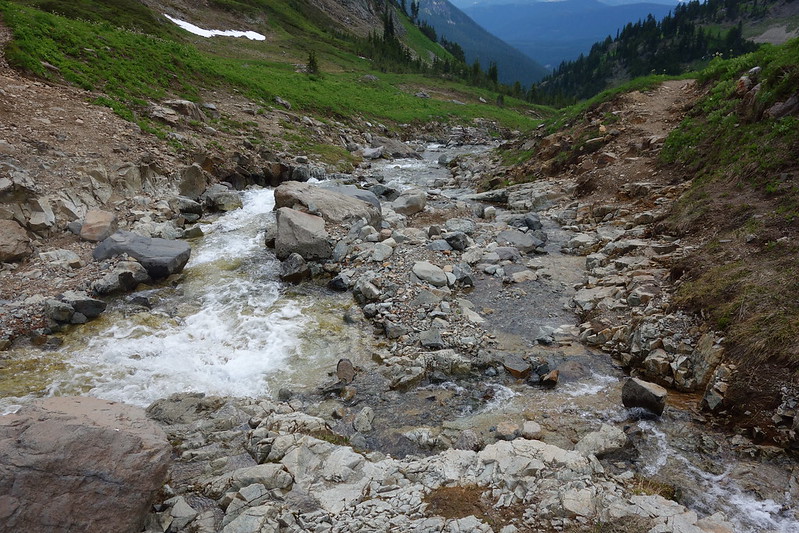 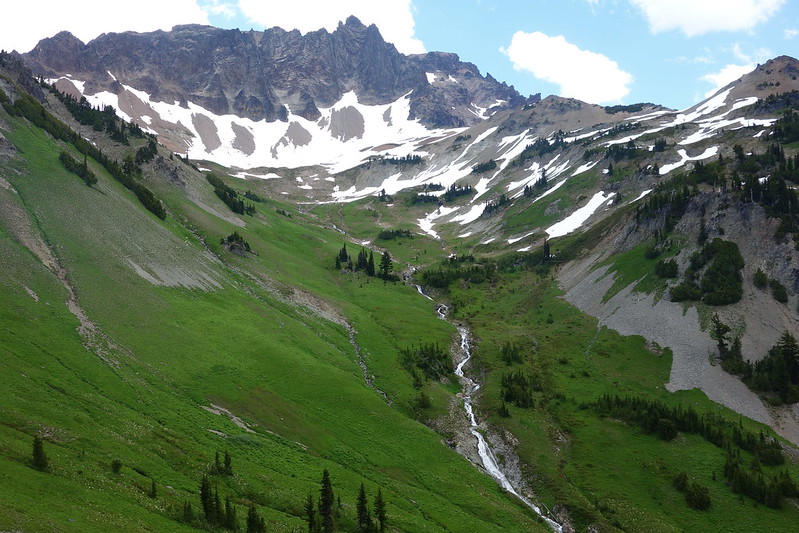 In his essays, John Muir constantly refers to mountains as “fountains.” Apparently his early editors thought this was some sort of strange, repetitive error, but he meant it literally: he thought of mountains as the ultimate sources of life, watering the rest of the world. I thought about that a lot as I walked through these basins.

From Cispus Basin, the trail curved again, up toward a broad series of meadows above Snowgrass Flat. It started to rain lightly as I passed through the last trees I’d see for several miles, but it came to nothing, and I climbed in calm wind among gently swaying fields of flowers and exploding views in every direction. 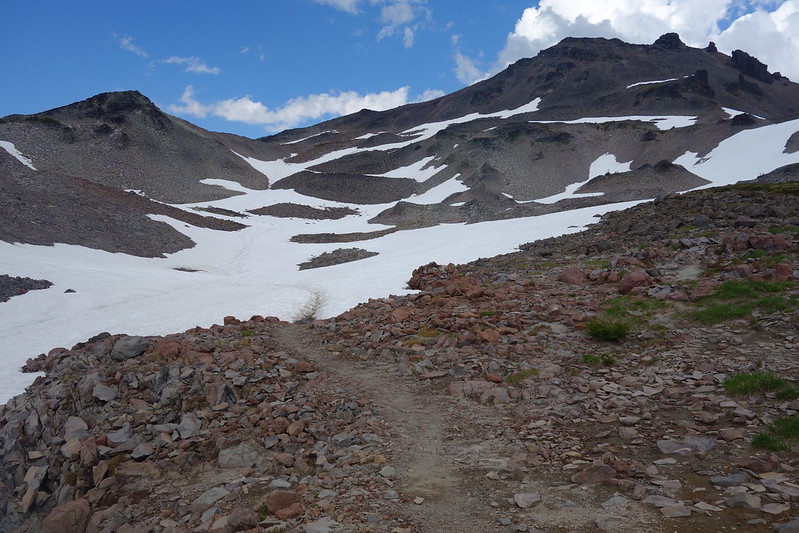 Krista and I came here on our first ever backpacking trip. There were thunderstorms both nights. I had to run out in the middle of the night to dig moats around the flooding tent. Our packs were so heavy that neither of us could walk normally. I brought two pairs of jeans.

Walking through the area now, it feels like walking through a museum, or maybe better some holy site. Some monument to our clumsy first steps into this new life. I stopped for lunch at a viewpoint overlooking the basin where we camped and stared down at who we used to be. 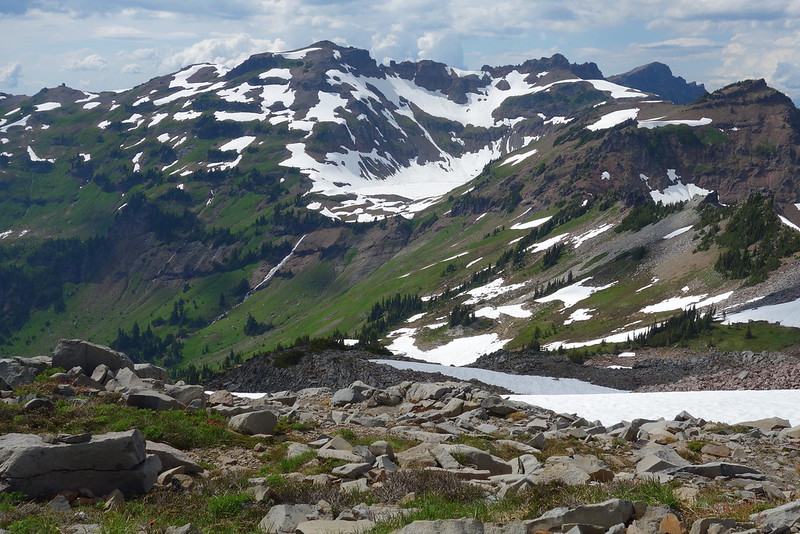 I was ready for some Serious Snow near the highpoint here—the highest point on the Washington section—but it actually wasn’t so bad: a few long snowfields before Old Snowy, and a few sketchier ones at the top of the Packwood Glacier, but nothing really to write home about (and nothing, even, to strategically leave out of one’s letters home either). 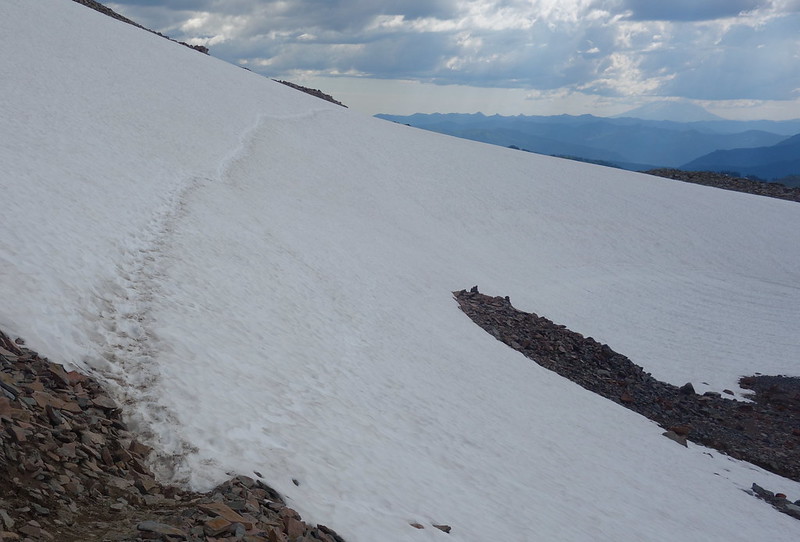 After passing Old Snowy and the Packwood Glacier, it was on to The Knife Edge, a four or so mile ridge walk, with occasionally sketchy exposure and eroded trail. I got nervous a few times, mostly because of strong winds and an incoming storm, but again it was never that bad… at least, it wasn’t in reasonably good weather. And dude: those views! 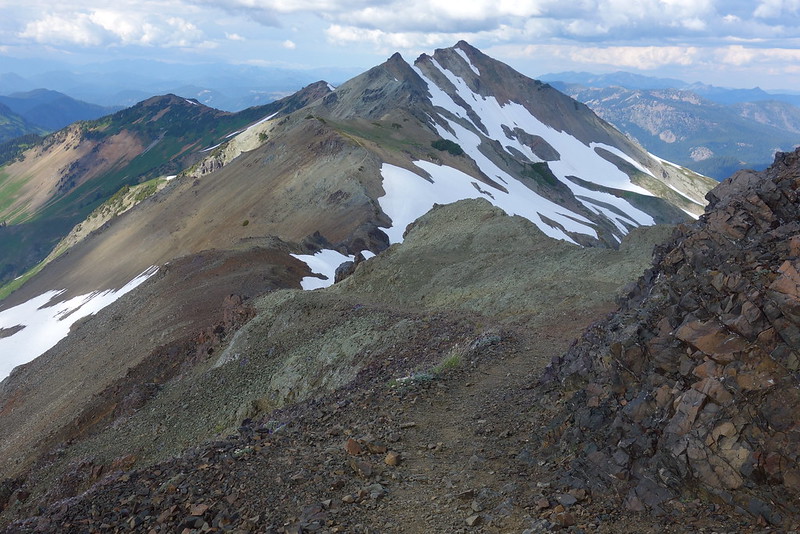 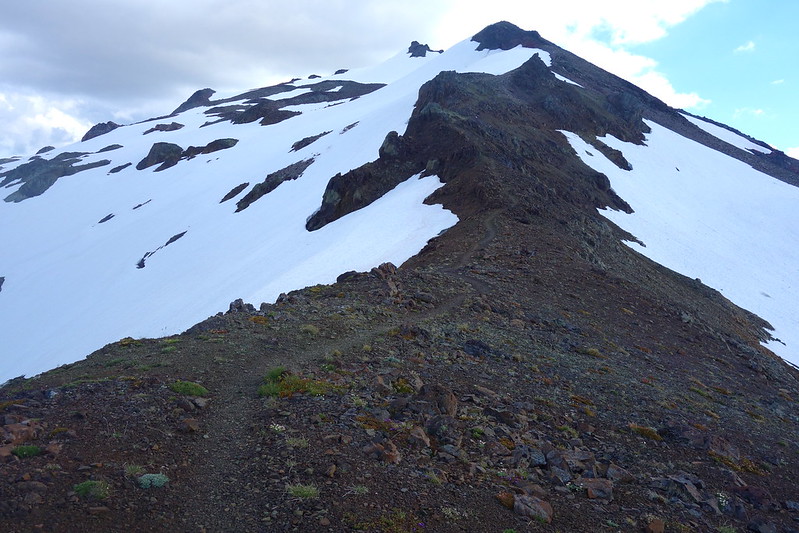 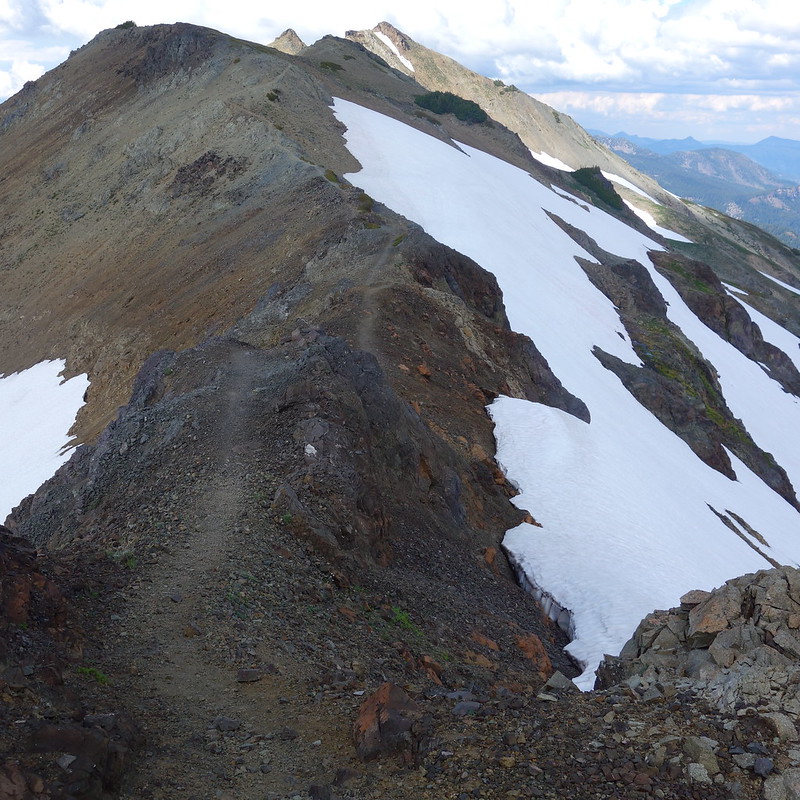 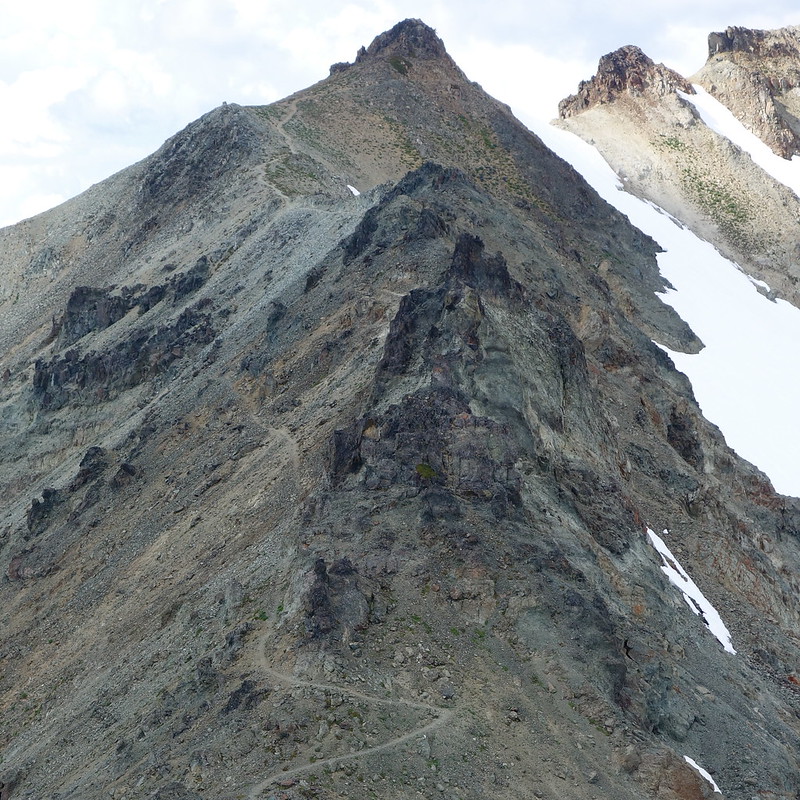 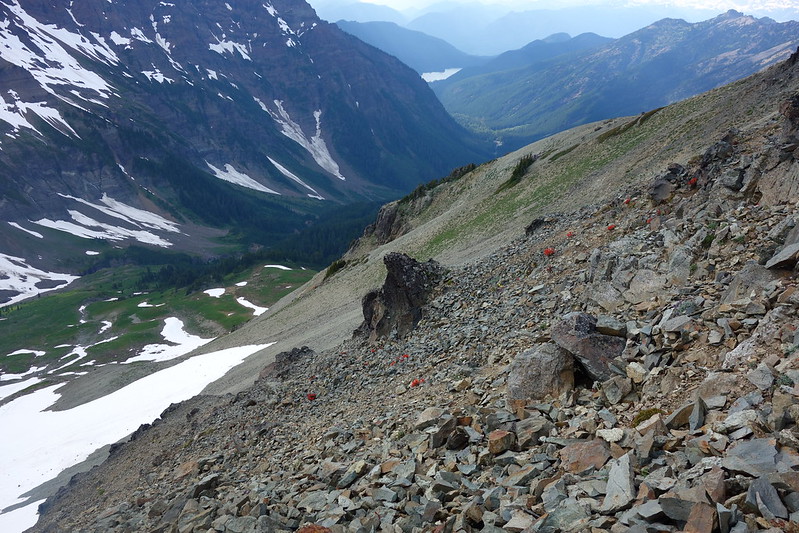 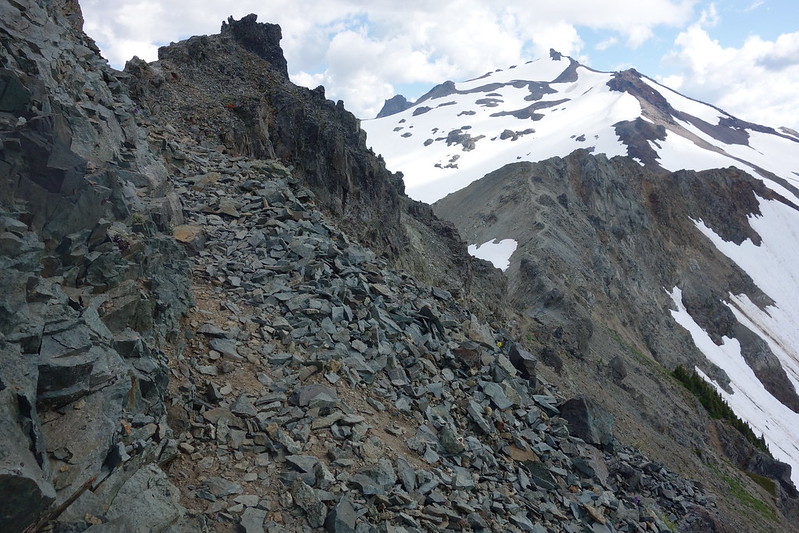 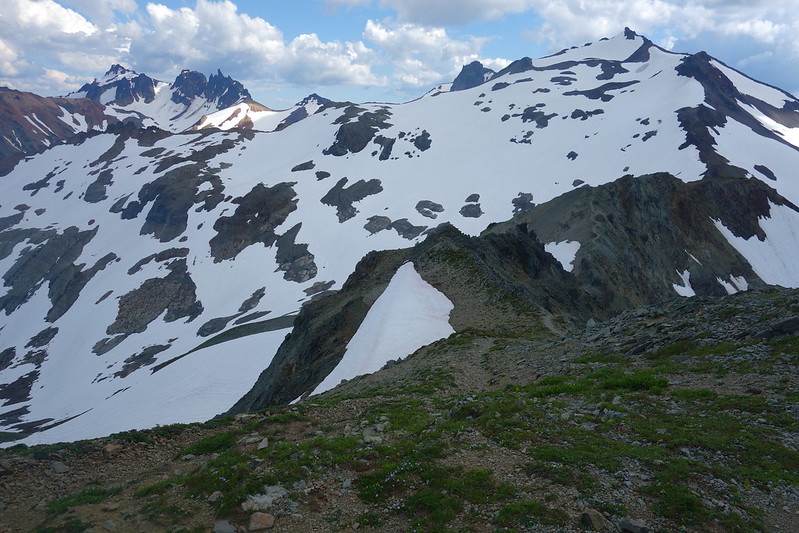 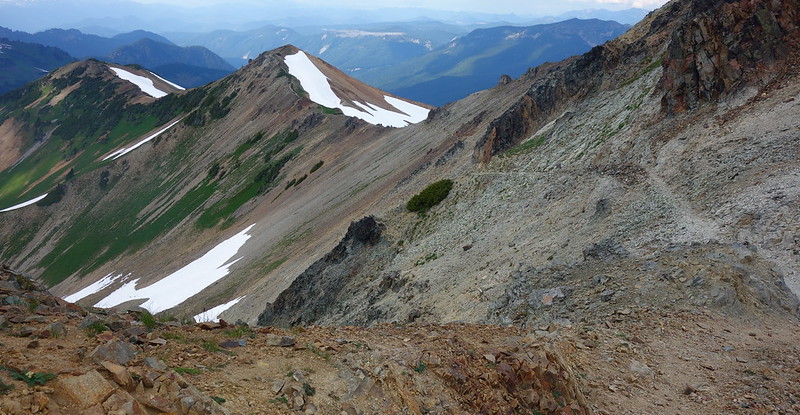 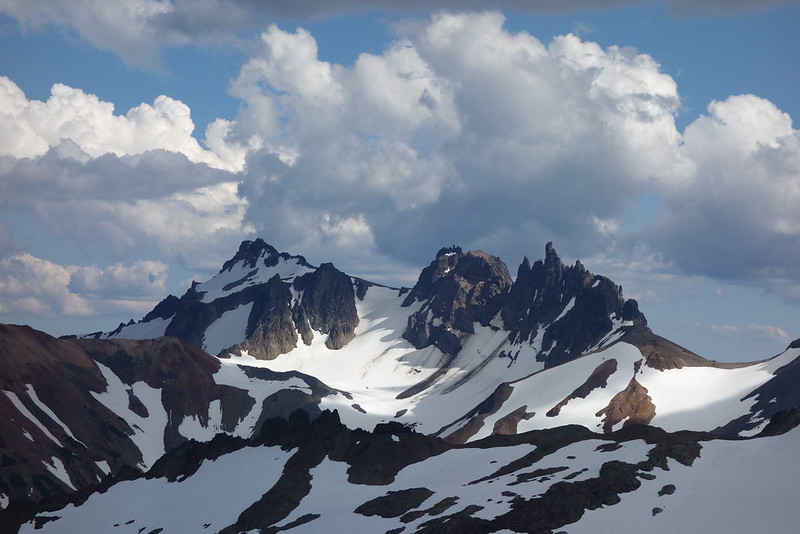 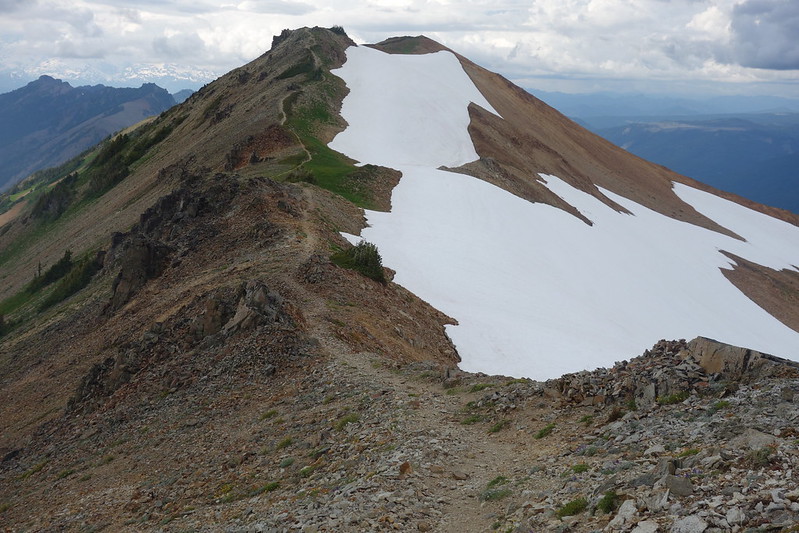 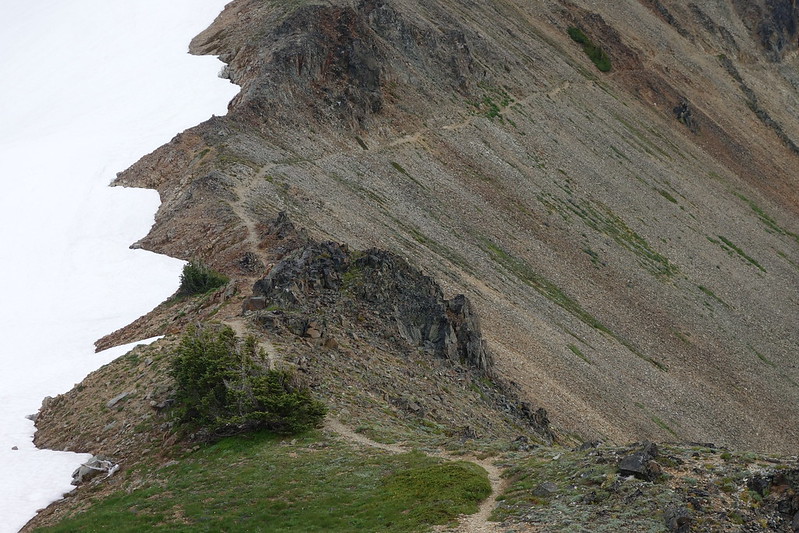 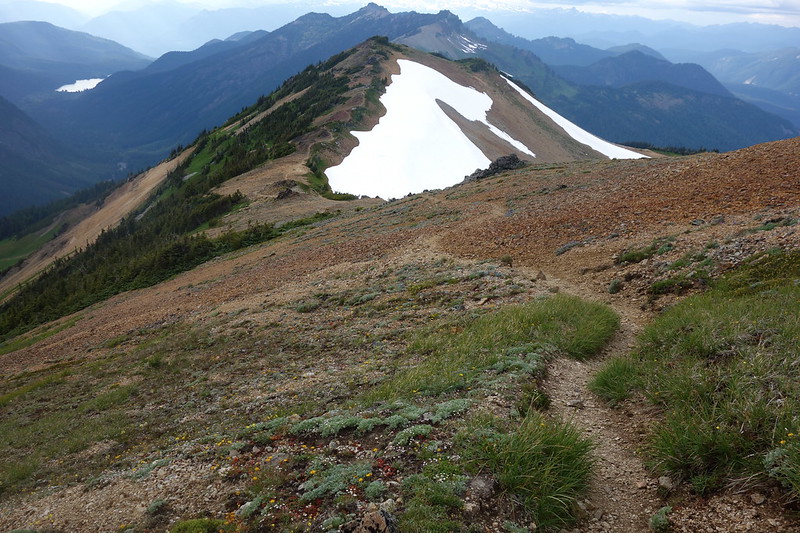 Just as I was reaching the Knife Edge’s end at Elk Pass, I began to hear distant thunder, and to feel a tiny bit of spitting rain. Huh.

Things began to quickly turn, and I hurried down to the basin where I’m camped now: a beautiful set of meadows watered by melting snowfields just above. I filtered some water from an ice-edged stream, and quickly set up camp in a club of trees. 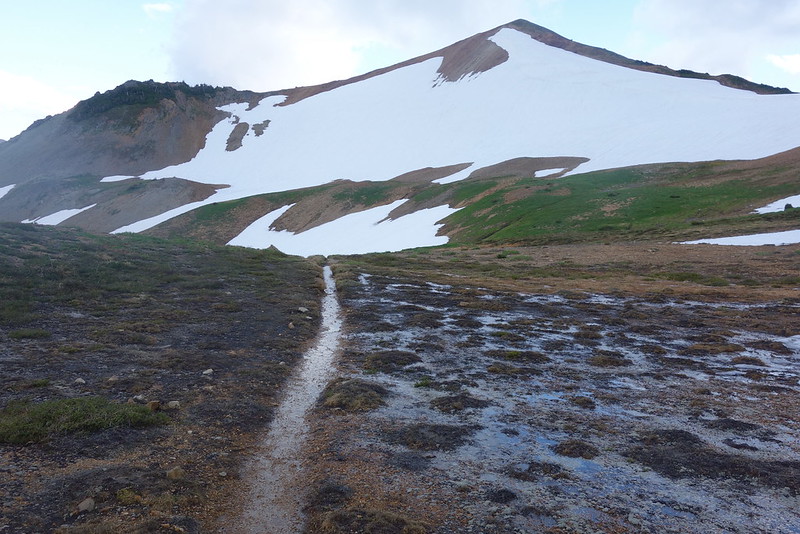 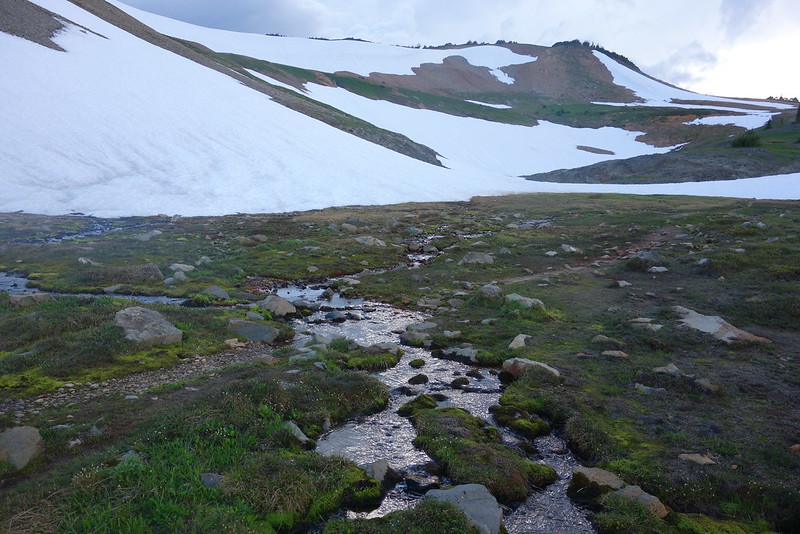 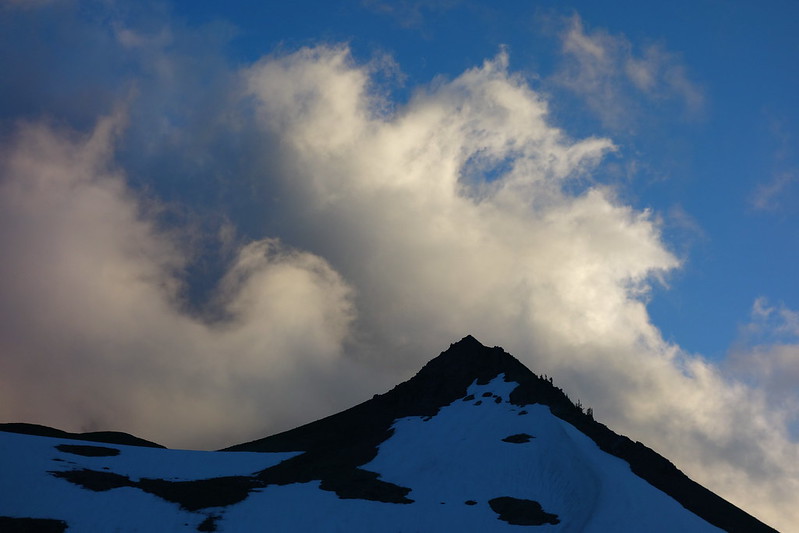 Just as I was finishing dinner and contemplating a cocktail—or, at least, what passes for a cocktail at 6000’—the wind picked up and it started to snow. And as it did, a disheveled young woman with a tiny pack came nearly running past. “Holy shit!” I think she was talking to me, but she was staring back up at the ridge with something between dismay and disdain. “Holy shit.” I asked if she was alright. “Yea dude, I mean, fuck. I nearly shit my pants, fuck, but yea, fuck, I’m fine.” Apparently the wind was much stronger up there, and lightning had struck the ridge.

I asked her if she wanted to camp with me—there was more than enough room for another tent in my clearing, and she seemed like she needed that cocktail more than me—but she wasn’t having it. “Dude, I’m getting the fuck off this mountain.” She scampered fifty feet down the trail, then yelled back. “Hey, what’s your name?” I told her. “Hi Robin! Sorry, I didn’t mean to be rude, but… fuck!” And she was off.

I scampered to my tent and snuggled into my quilt as the snow became driving hail. It’s been hailing for an hour now, and the wind’s getting stronger. But the trees are covering nicely, and I’m warm and dry. 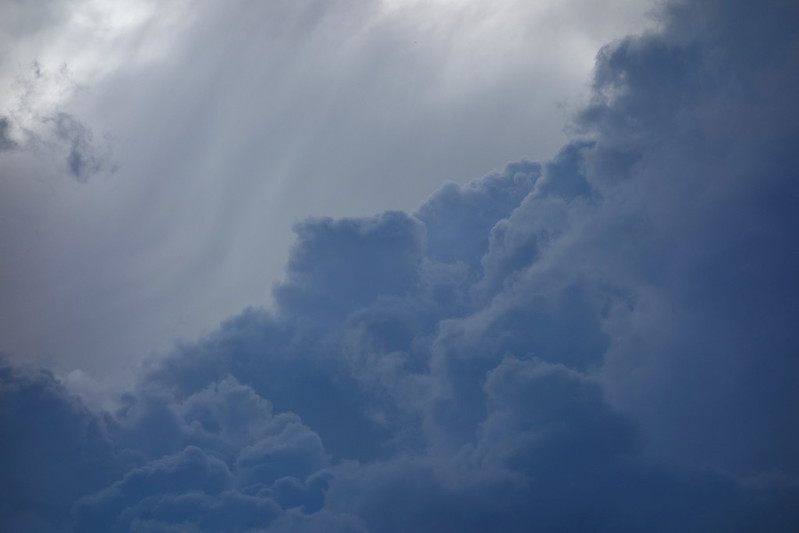