I woke up this morning sore—like, maybe the sorest I’ve ever been on a backpacking trip. I haven’t really been doing very long days, all things considered, but I guess in planning I didn’t account for the cumulative effects of doing long-ish days over and over.

So I woke up sore, and have had a slow morning, eating breakfast in camp, taking pictures of the nearby flowers and waterfall, and just generally putting off having to walk. 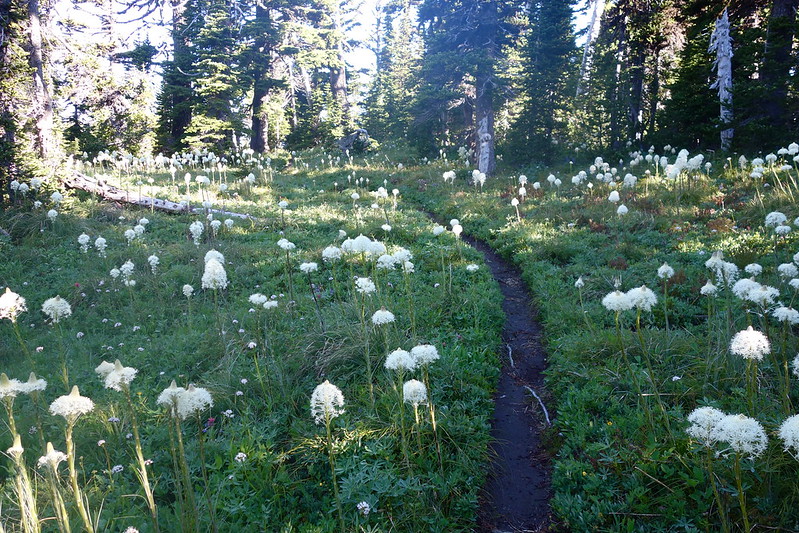 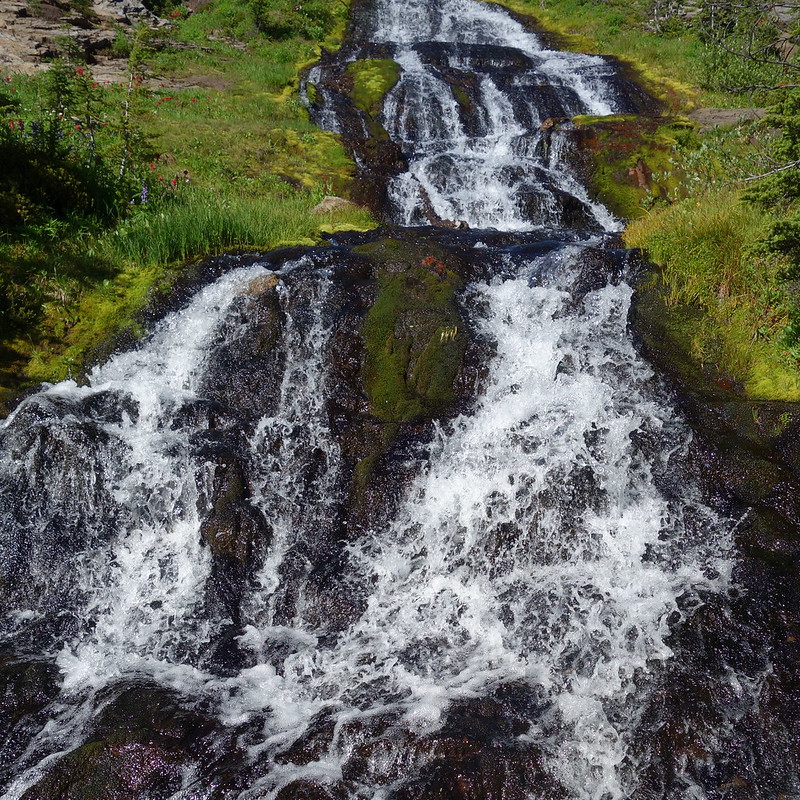 I guess at some point—probably some point soon—I should stop stalling, and, you know… walk. But but but…

But I guess you can’t stall forever. After leaving camp, I started down the trail in what I’ve come to think of as the “PCT Shuffle”: a sort of limping hobble wherein trekking poles guest star as crutches. The trail was easy as it passed a few small lakes and began a long, gentle descent away from Mount Adams, but my legs still weren’t having it. 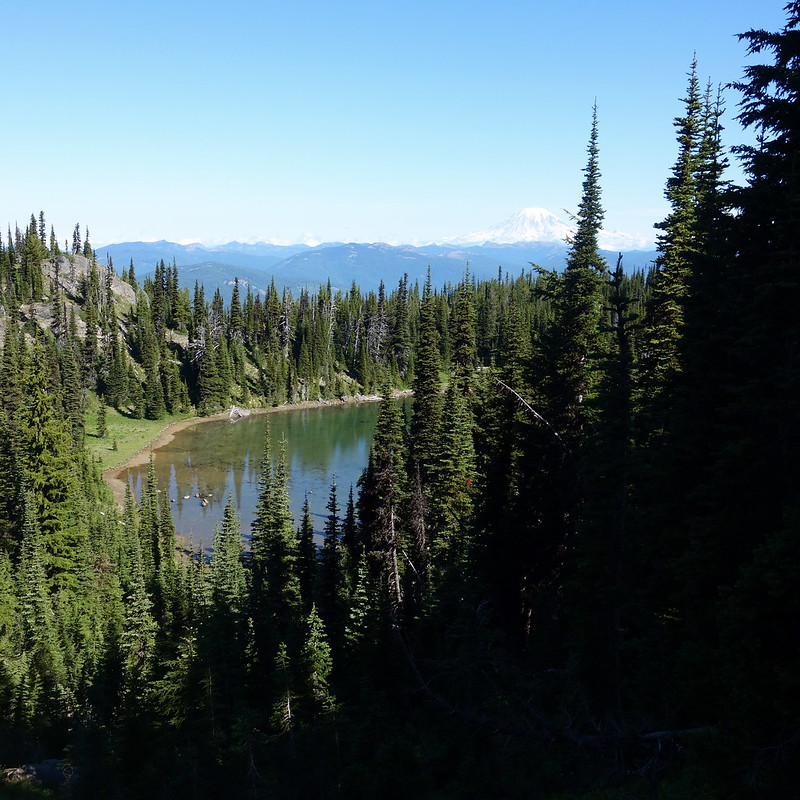 I feel like, so far, today’s been spent in between: descending from Adams and ascending to the Goat Rocks, but never really being in either. After a few dusty miles coming down from Adams, I crossed a sunbaked Forest Service road. Sitting in the shade of the Potato Butte Trailhead sign, a shiny new jeep sped by, with a topless woman standing in back, waving her arms. “Woo!”

Then it was on to another road—an old, ostensibly closed jeep track that still hasn’t quite given up its parallel tire tracks—as the trail wound its way around the western slope of Potato Hill and up into the Goat Rocks. It’s been hot and dusty and demoralizing. And dry. I ran out of water somewhere near the Topless Road Crossing, and there was nothing but mud in the several miles between there and here.

But now there’s a beautiful small seasonal stream, with frogs sunning themselves on the side. I’ve been sitting in the shade for a while, drinking a couple liters of water, eating fruit snacks, and looking at my topo maps. Just a few miles to the Goat Rocks! The Goat Rocks! I know those guys! 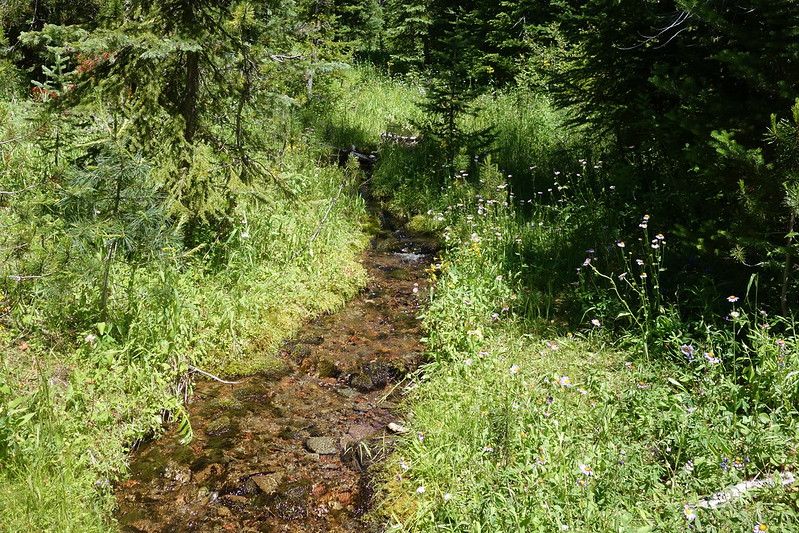 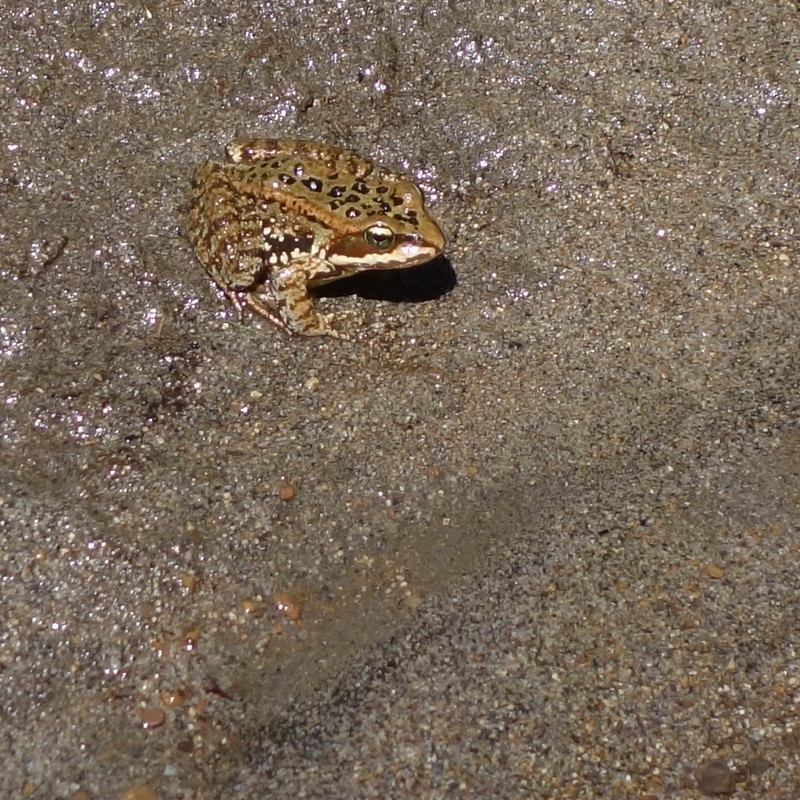 The last ten miles today were sort of rough. As the trail climbed toward Goat Rocks, it entered a sort of marsh, full of warm, small ponds and thousands of mosquitoes. It was getting on toward the time when lunch starts to sound like a good idea, but every time I stopped the mosquitoes swarmed, so I kept going, getting hungrier and grumpier. 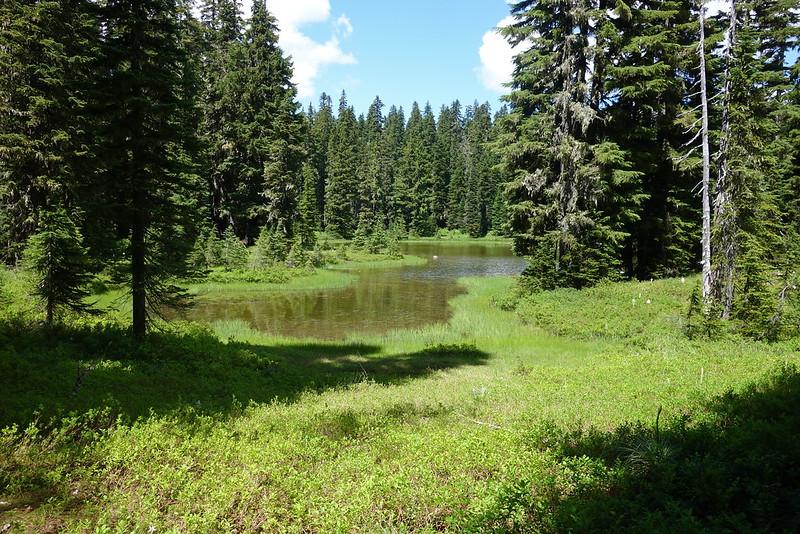 Eventually sense did get the better of me, though, and I stopped at a small rock outcrop above Walupt Lake for a little lunch and a lot of Deet. Food! On dayhikes, I can be somewhat cavalier about eating, going until four or five until lunch. But I guess on longer outings, that stuff starts to be kinda important, and I resolved to eat lunch at a reasonable time from here on out. 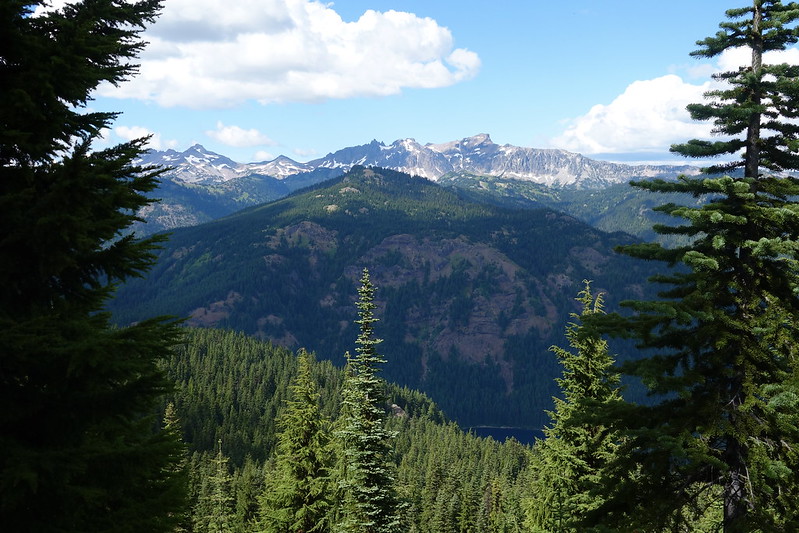 Stuffed with sausage and newly protected from the bugs, I got my second—or, really, first—wind, and quickly made the last six miles to camp, climbing down from my outcrop then speeding through the pleasant, cooling, wet woods. 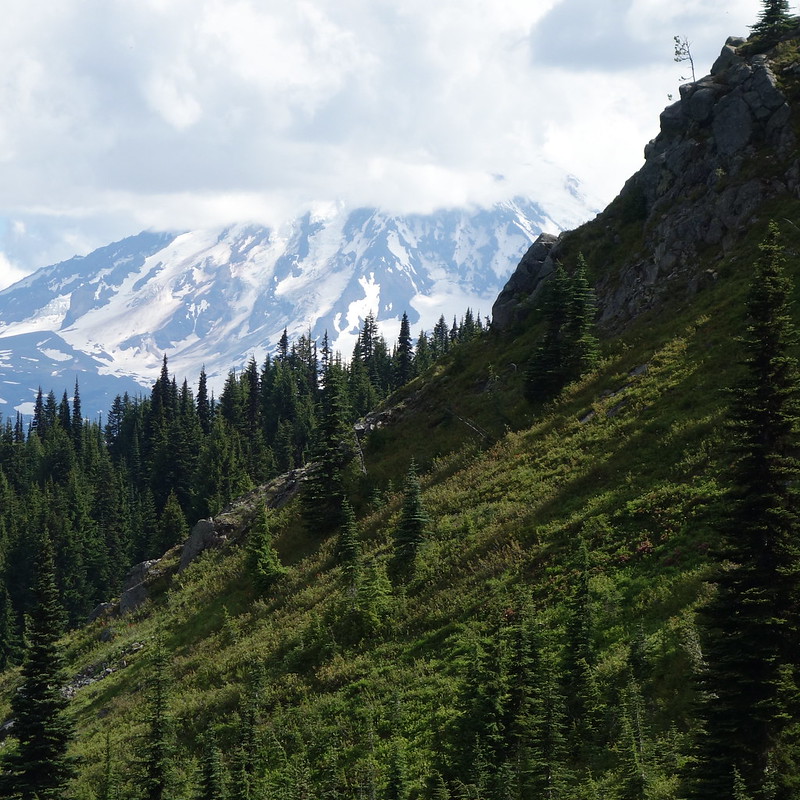 Camp tonight’s an inexplicably well-established off trail site at an unnamed lakelet near the Walupt Trail junction, just above Short Trail Camp. I set up my tent in the later afternoon—no rainfly tonight!—and had a great dinner, sitting on the edge of the water, watching an elk nibble on grass across the way. 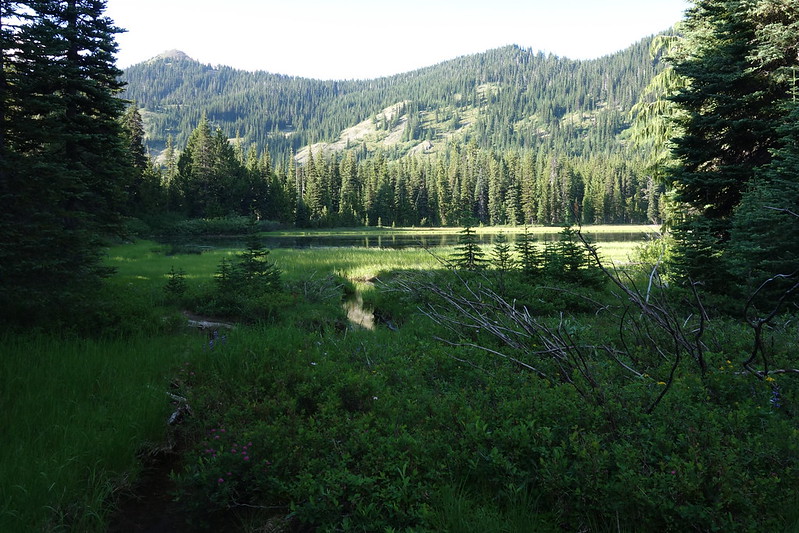 As I was going to sleep just now, I heard the most spectacular splashing, and ran out of the tent to see what the hell it was. In the distance, across the lake, I saw that same elk, knee deep in the water, having some sort of an evening bath. It saw me too, but seemed utterly unconcerned, and we both just stayed like that for a while—it playing in the water, me standing in awe—until the last of the light was spent, and I reluctantly returned to the calmer waters of my tent.

I love it here.