This morning was an echo of the morning I left: our alarms went off, but neither of us wanted to get up, because getting up meant saying goodbye. So we slept late, schedules be damned.

Eventually though we did get going, stopped for coffee in Packwood, and made it back to White Pass too soon, to say our too quick goodbyes. But it was easier this time: having made it a week, making it another few seems somehow more possible.

The hiking’s been easy today. Easy and fast. After Krista dropped me off, I basically bounded up the trail into the William O. Douglas Wilderness, and soon entered a large, flat plateau dotted with dozens of lakes and hundreds of ponds and thousands of hungry mosquitoes. It was beautiful, but probably would have been more so if it hadn’t been made blurry by the fact that I was running through to escape the bugs. 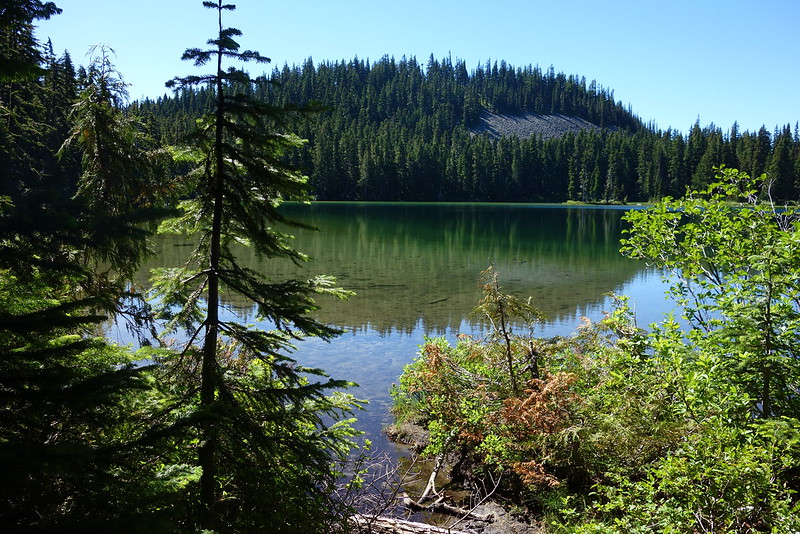 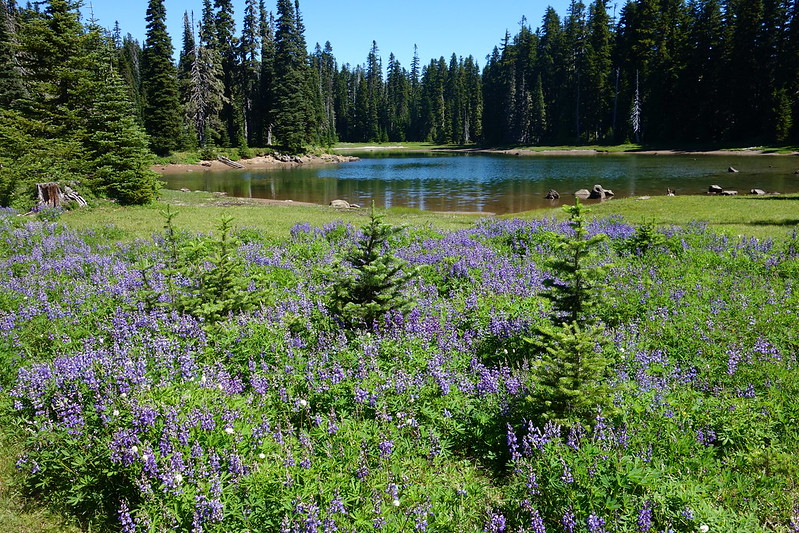 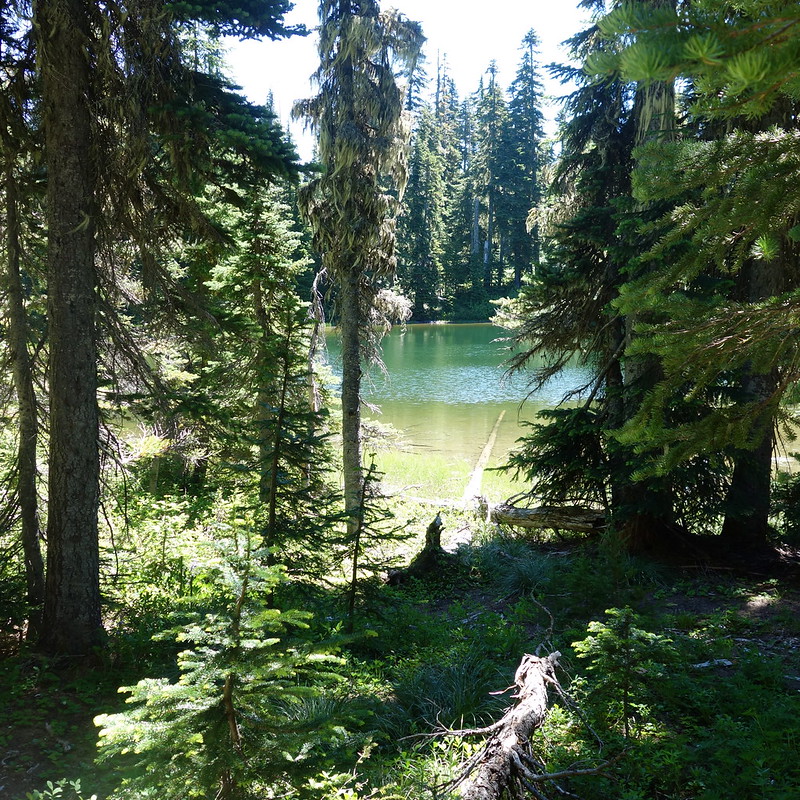 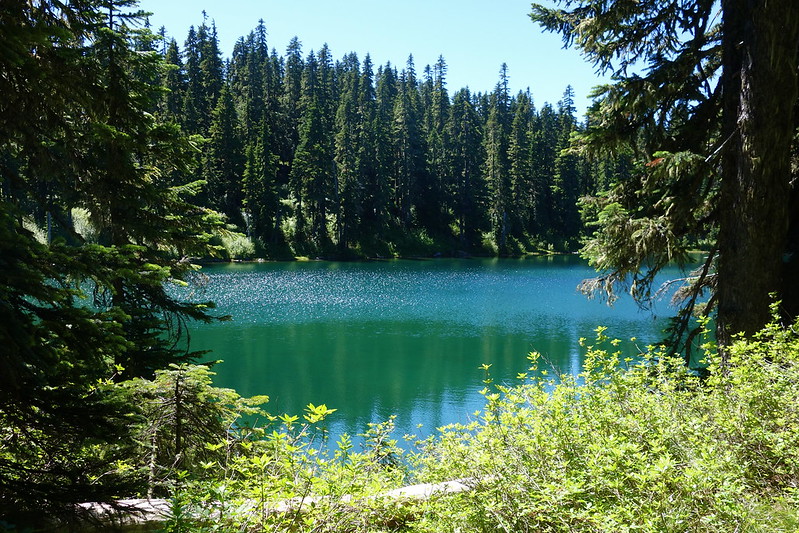 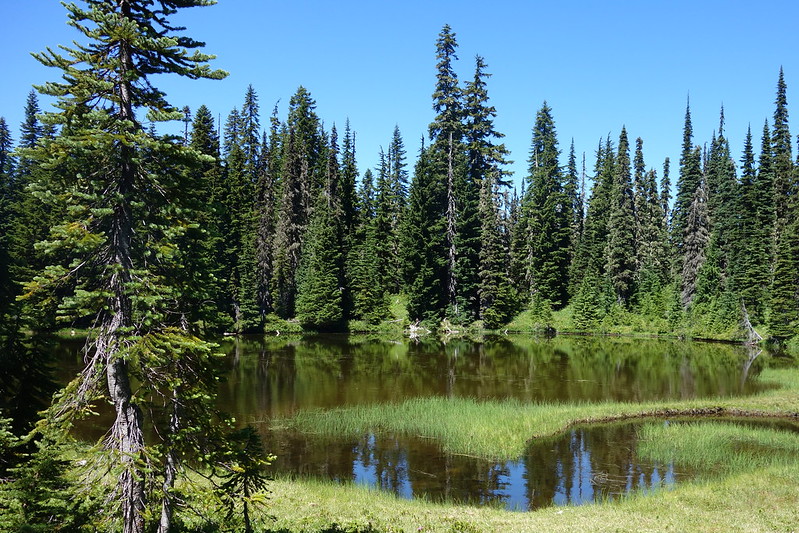 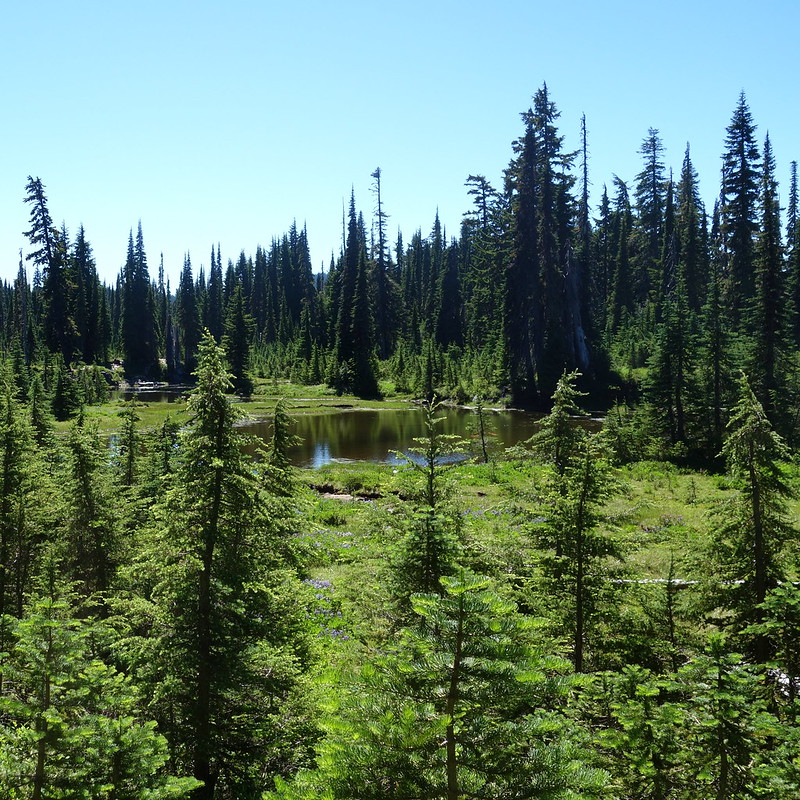 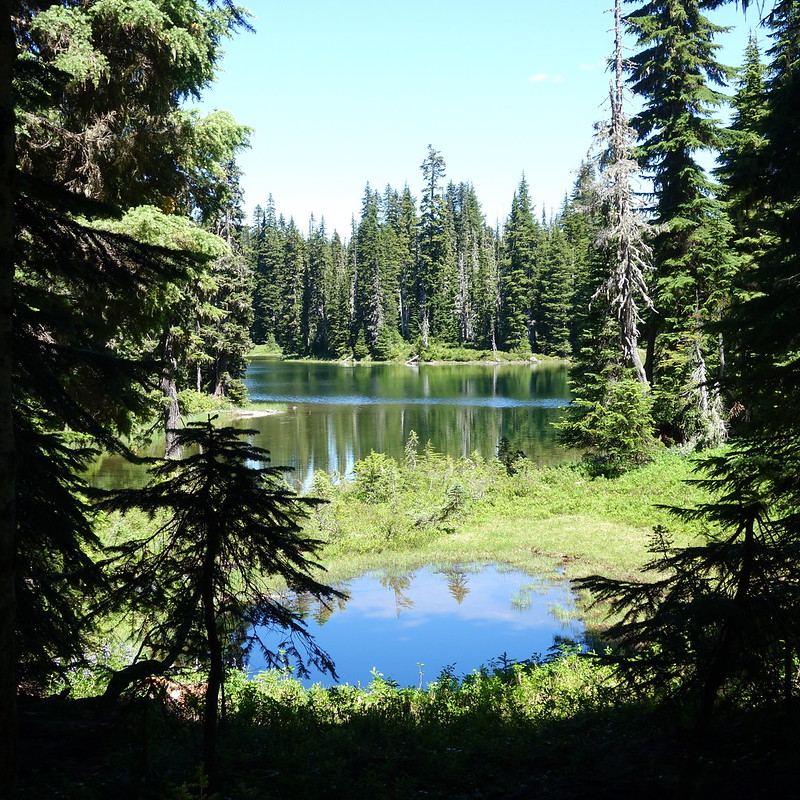 Near the northern tip of Snow Lake, I ran—almost literally—into the first of many southbound PCT hikers I saw today: a woman in her mid-20s who gamely stopped to chat for a while, despite her legs being immediately covered by mosquitoes. She started at Harts Pass a few weeks ago, went up and back to the border, and has been walking south since, doing long days through last week’s storms. “It’s beautiful up there… I mean, when you’re not in a cloud.” And then she paused, laughing. “I guess the clouds are okay too.”

Talking to her, I thought about the strange rhythm of thru-hiking. Last year on the JMT, it was more or less one sunny spectacular day after another. There was smoke in the afternoons, but tall clear spires of granite every morning. Here the day’s delights are sometimes more subtle: a few ponds, a rushing stream, fading sunlight on the evening pines. Some days are spent in clouds, with views extending only a few feet. Some are spent doing little beyond running from bugs. And yet some are spent on high ridges, with views for hundreds of miles, so beautiful I have to sit now.

As we said goodbye and I began a long, steep descent to the Bumping River, I thought about something I’d read just before leaving on this trip, from William O. Douglas, the environmentalist Supreme Court Justice for whom this whole area is named. Recounting a series of illnesses later in life, Douglas recalls remembering this place—the Bumping River, the Goat Rock, Mount Adams—from his sickbed, and the memory bringing him back to the world:

The Cascades have been particularly undeniable when I have lain in sickbed. In days of fever and sickness I have climbed Mount Adams, retraced every step from Cold Springs to the top, recrossed its snow fields, stood in an icy wind at its highest point, and there recaptured the feel of adventure and conquest and the sensation of being back millions of years at the time of the Creation.

During hospital days I have explored many streams of the Cascades, looking for the delicate periwinkle. I have cast a fly on dozens of their lakes, and searched the pools of the Big Klickitat, the South Fork of the Tieton, Bumping River, and the Naches for rainbow trout. I have sat on the crags of Goat Rocks 500 or 1000 feet below the summit, waiting for a mountain goat to appear in silhouette against the skyline. I have seen lively bug hatches on Fish and Swamp lakes. I have heard the noise of elk in the thickets along Petross Sidehill.

These have been haunting memories that in illness returned me to the world of reality even when it seemed I might be close to the other side of the river.

Thinking of Douglas, I realized that, in all probability, I’ll remember all these days: of course the ones on stark peaks with views for miles, but also the ones like today, in boggy, buggy, viewless forest. And they’ll all remind me of what it means to be in the world.

I forded the Bumping River with no difficulty, then set out up a long series of switchbacks past Buck and Crag Lakes to the Cascade Divide, here a craggy ridge that the trail traverses, hopping back and forth across the crest between minor saddles, most of them hiding unlikely lakes. It was beautiful. 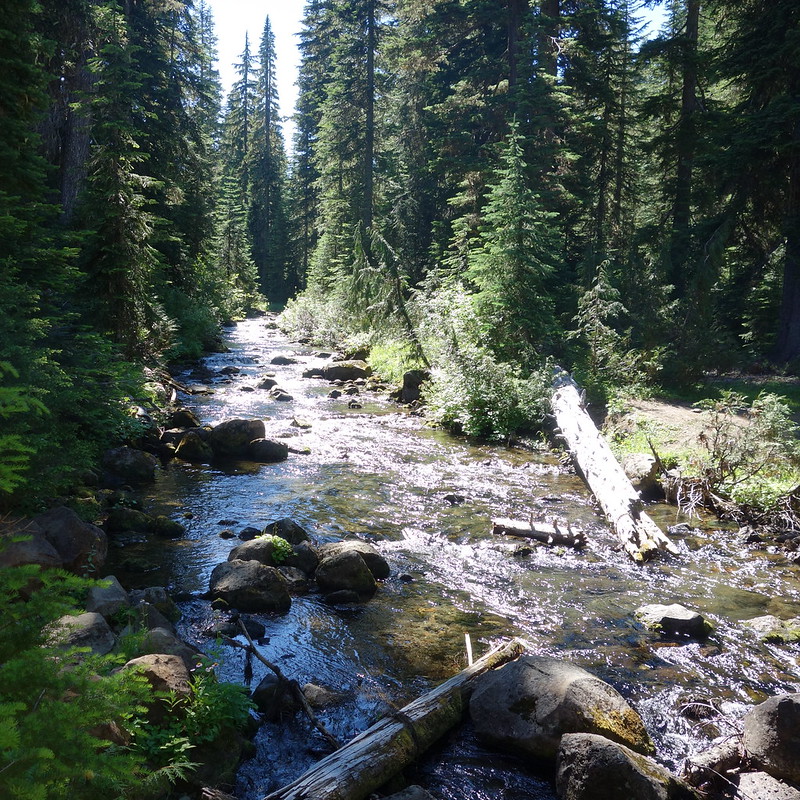 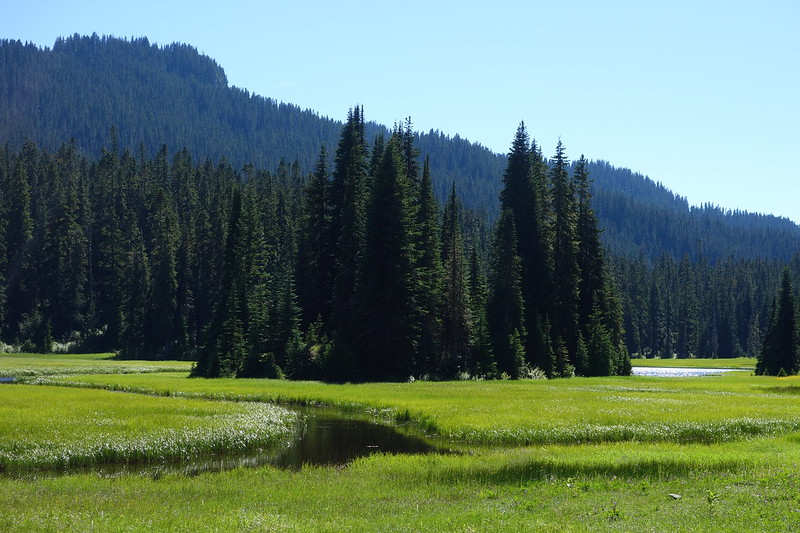 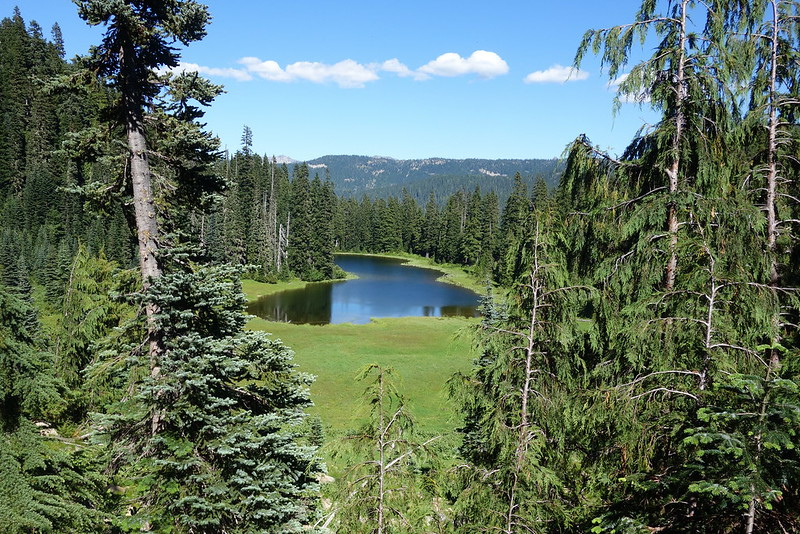 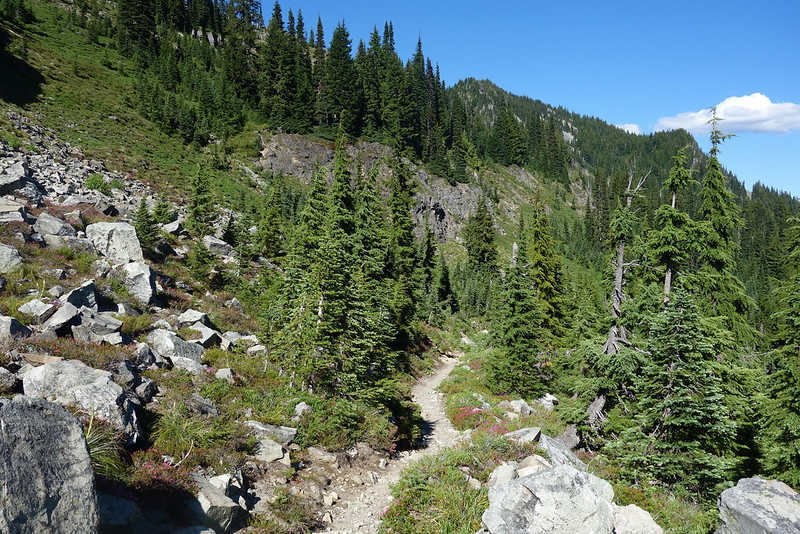 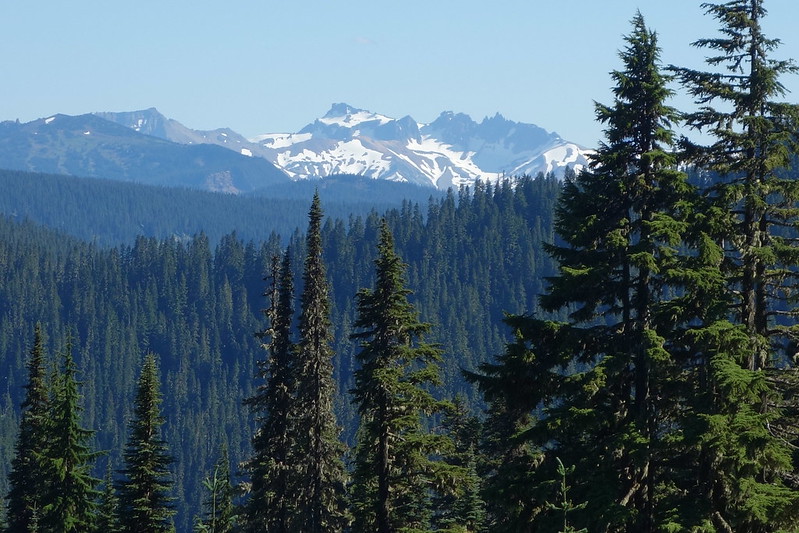 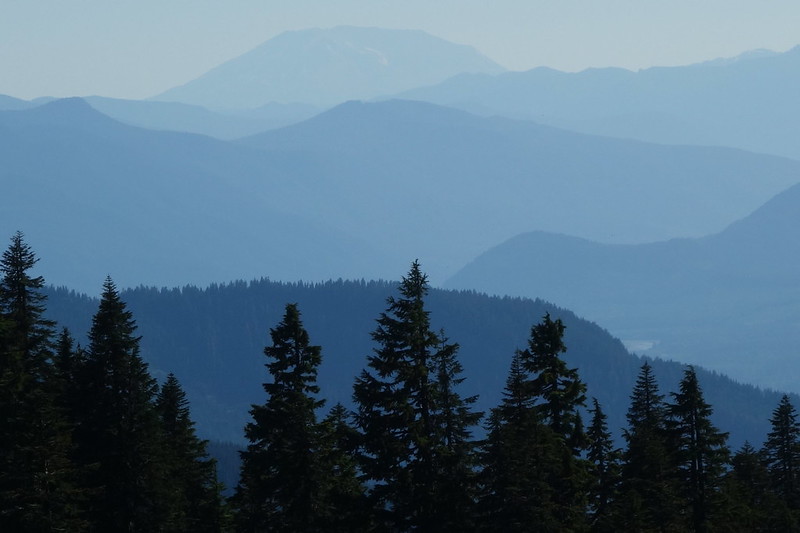 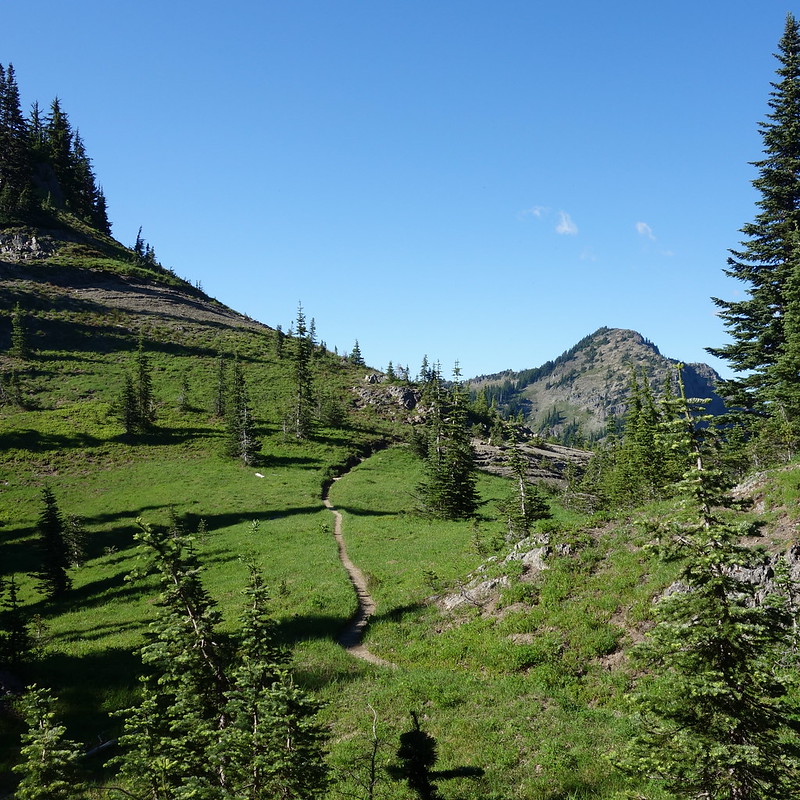 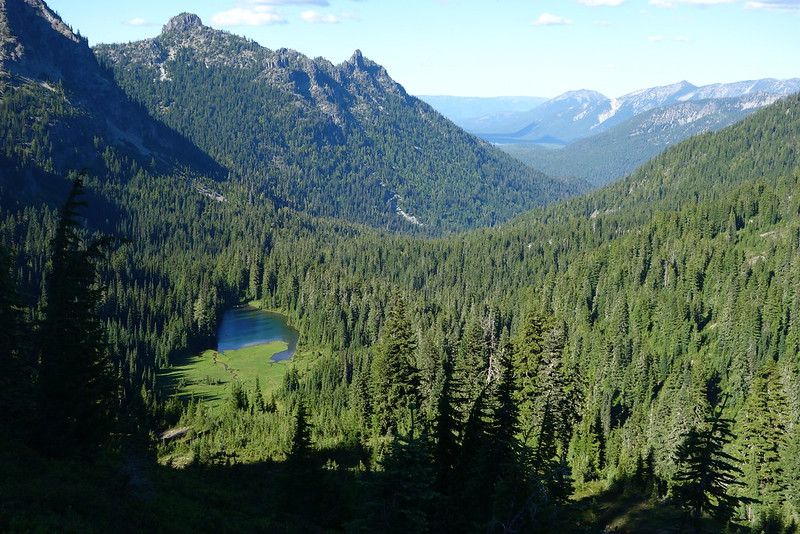 In short order the trail entered Mount Rainier National Park, and, as if on cue, the mountain began to haunt every corner, a washed-out specter in the harsh afternoon light. 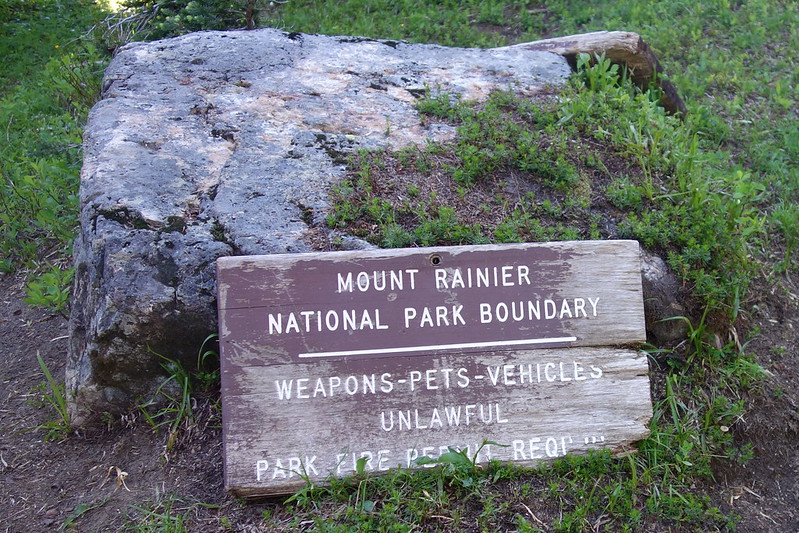 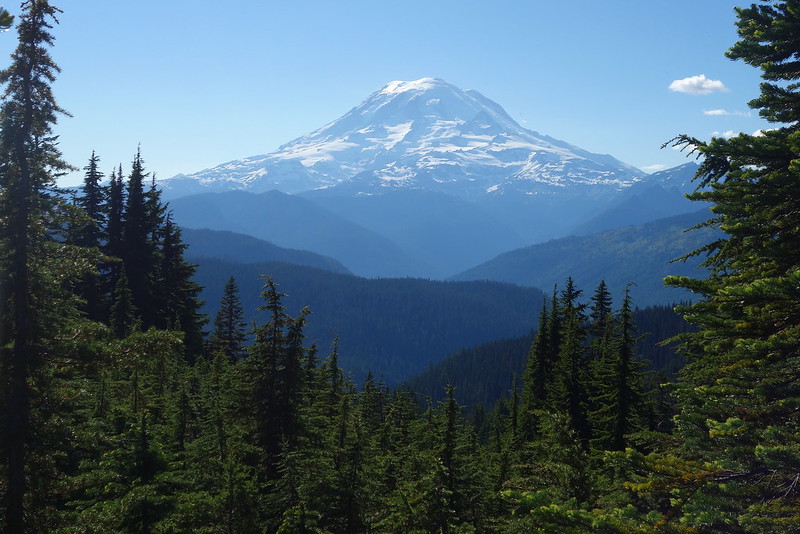 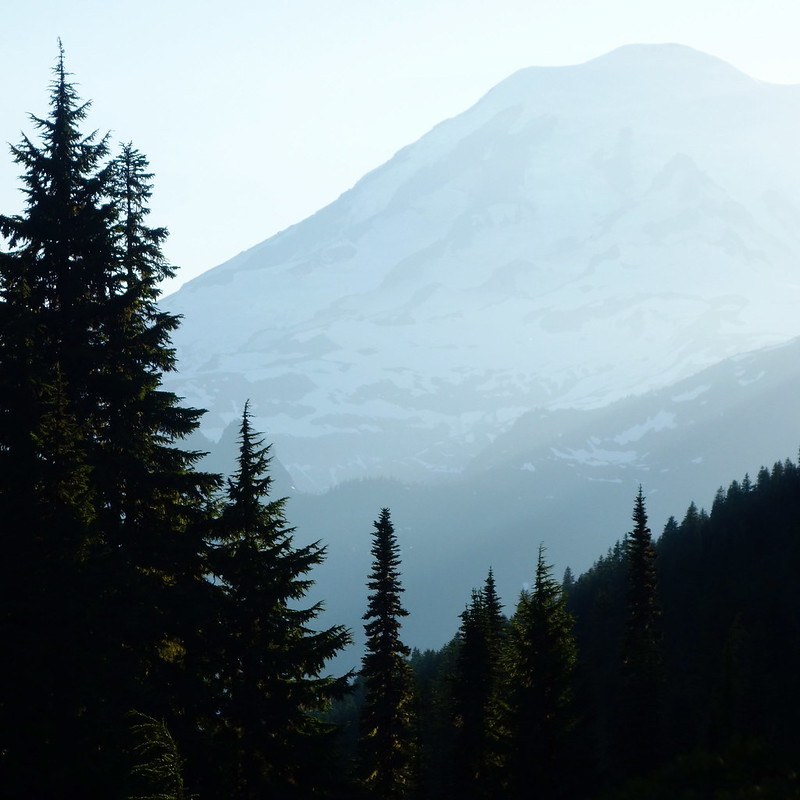 The afternoon passed pleasantly on the rolling ridge, among snowfields and fresh, meltwater streams. I stopped at one to filter some water, just a few feet from the source, then continued on, feeling happy and easy in the fading light. 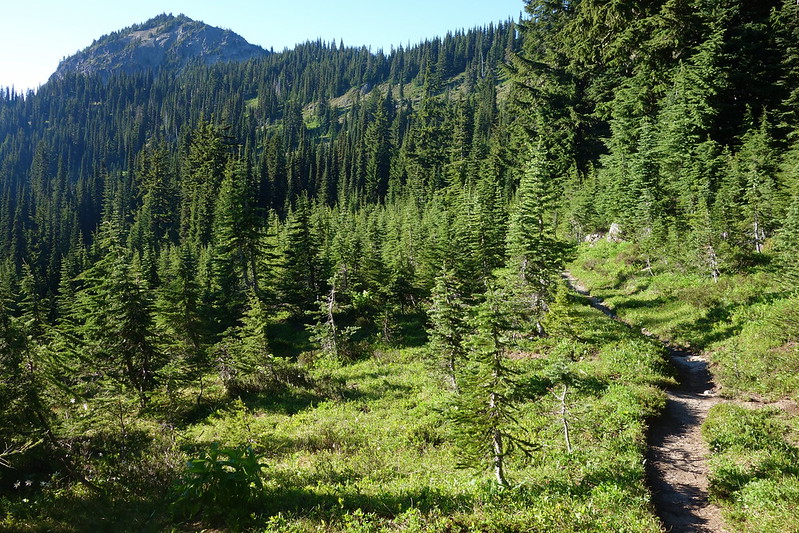 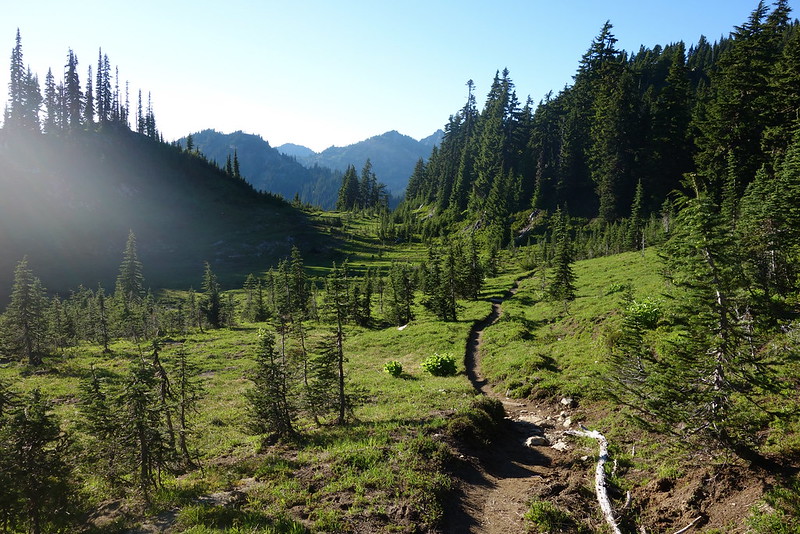 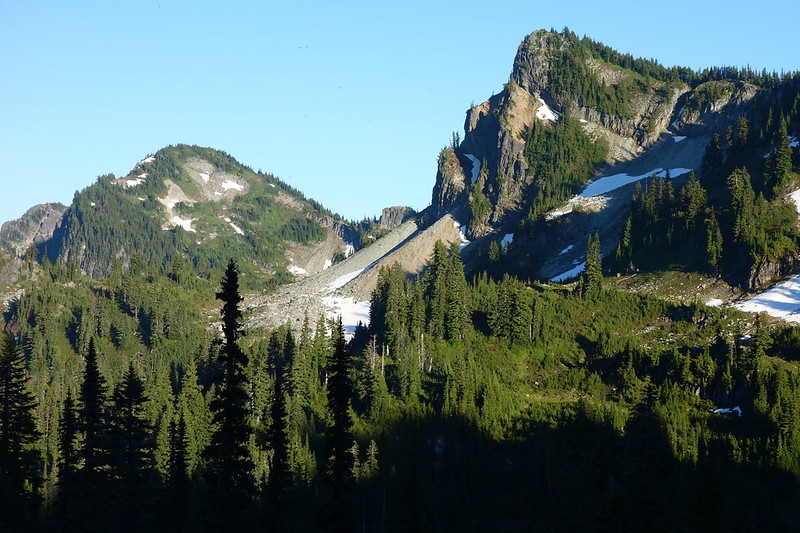 I’d been planning to camp at Anderson Lake, but when I arrived there a couple hours ago, I found the only suitable camp already full to the brim with tents. So I settled for a single picture, then continued on to Dewey Lake, where I am now, several swampy miles further. 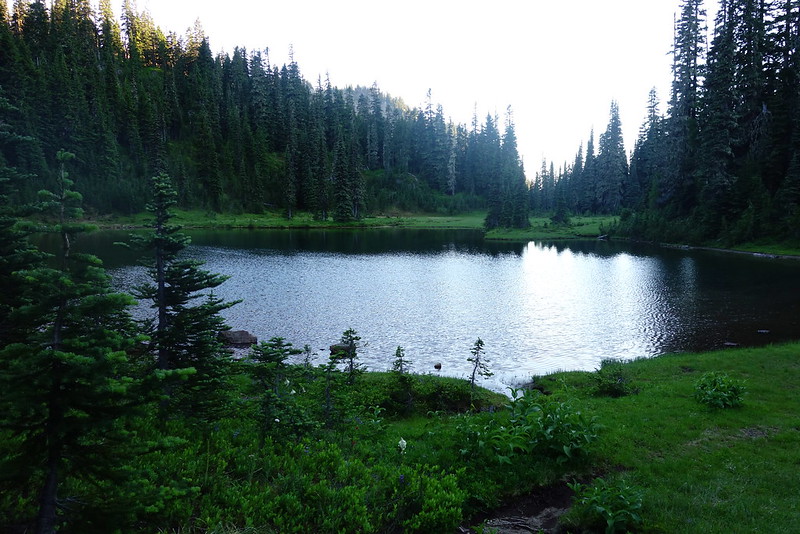 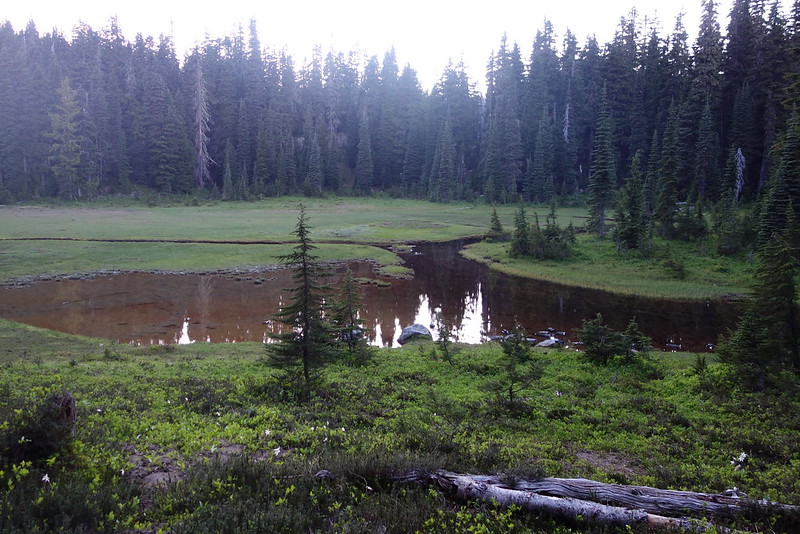 The lake’s unexpectedly full for a Sunday night. (Is it Sunday? I mean, like, what is a Sunday?) But the sites still outnumber the campers by a comfortable margin, and when I got here a couple hours ago a quickly found a large, luxurious spot on the lake’s southern shore. It was nine by the time I got camp set up, and I was too tired for a proper dinner, so I ate a second lunch, had a few sips of bourbon, and settled into the tent to the sound of a hundred frustrated mosquitoes, trying to get blood through the bug net. They’ve only just gone to sleep. I guess I should follow suit.