So, I think the mosquitoes slept on my tent. Or in any case they were up before me this morning, poking hopefully through the netting as the sun rose over the American River below and flooded my lake with light.

It was a fumbling, clumsy morning, trying to pack up among a million bugs. It took forty minutes and forty-thousand bites to get going. But eventually I did, and swatted my way around the lake to visit the dozens of neighbors I didn’t see last night.

The neighbors all seemed out on the sorts of short weekend jaunts where you bring chairs and a bag of potato chips and maybe a six pack. One dude was making breakfast in a cast iron skillet. A cast iron skillet. I think he’d brought fresh sausages.

The trail up from Dewey Lake was gorgeous—up around the southern flank of Naches Peak, through a series of small tarns on a small plateau, then down the other side of the peak toward Chinook Pass. But it was also super crowded. I didn’t see it on the map last night, but Dewey Lake is, like, three miles from the highway. And there were all sort of people coming as I was going: a young couple with two dogs, massive packs, and a wheeling suitcase; a set of Nature Bros with fishing poles; a wonderful old couple with bug nets and whittled walking sticks; a mom, teaching her daughter the names of wildflowers; a few more Nature Bros… 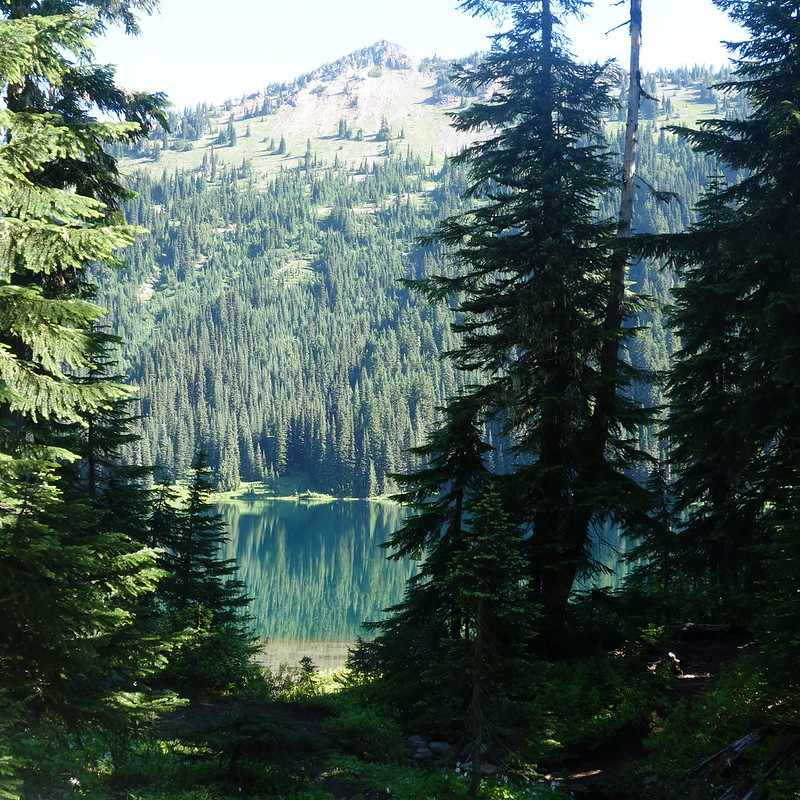 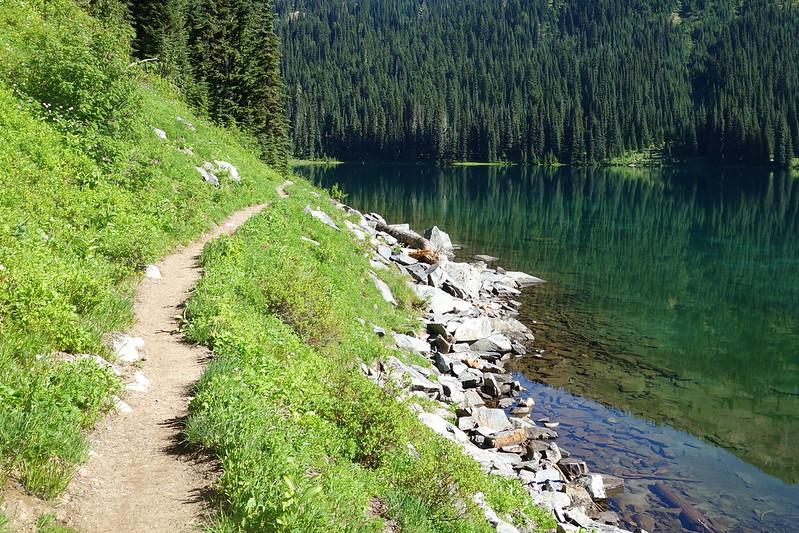 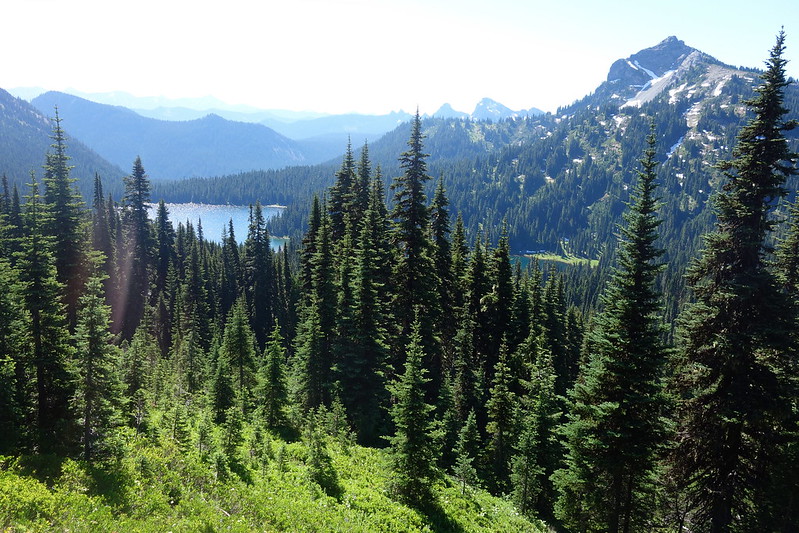 This weird thing’s been happening, where I’ll get blocked by big groups taking pictures with the PCT signs. Like, as though the sign’s a valued guest. “Say PCT!” PCT?

From Chinook Pass, the crowds thinned considerably. The trail paralleled the road for a while, but apparently this side’s less popular, and it was just me rambling along the freeway’s glorified shoulder, staring far down the American River valley. 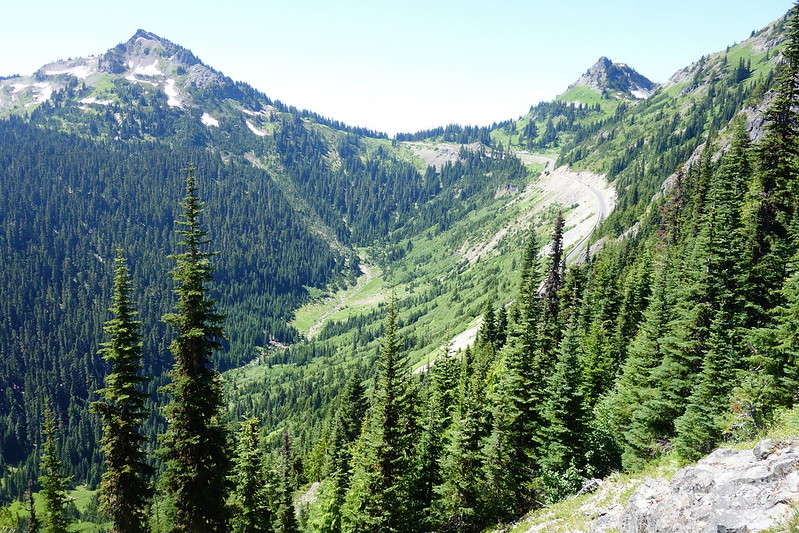 Eventually the trail turned sharply away from the road to cut up a steep draw toward Sheep Lake, a painfully beautiful, bright blue pool in the shadow of the Cascade Divide. 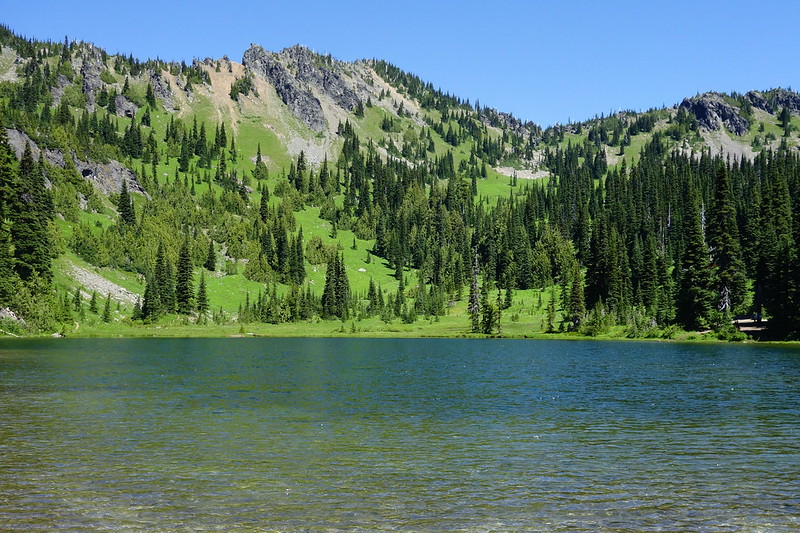 Beyond the lake, the trail climbed again, several hundred hot feet to Sourdough Gap, a rocky notch that marks the trail’s entrance into a seemingly endless system of ridges, valleys, and basins. 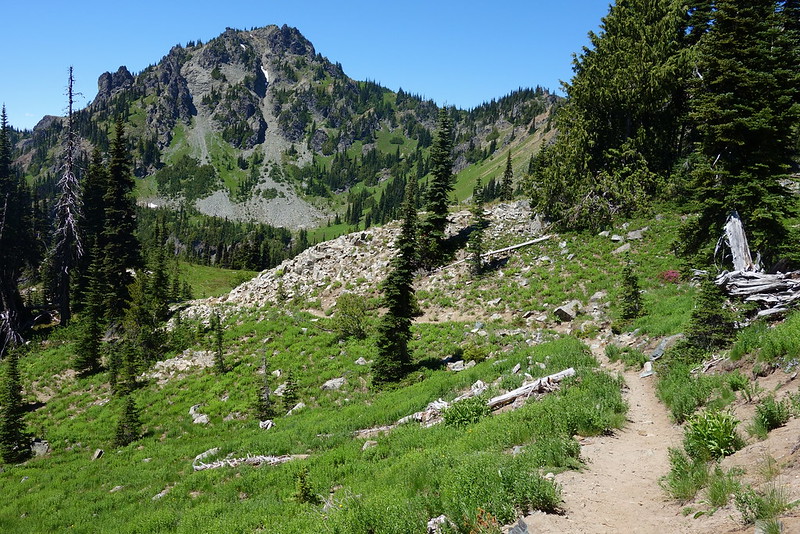 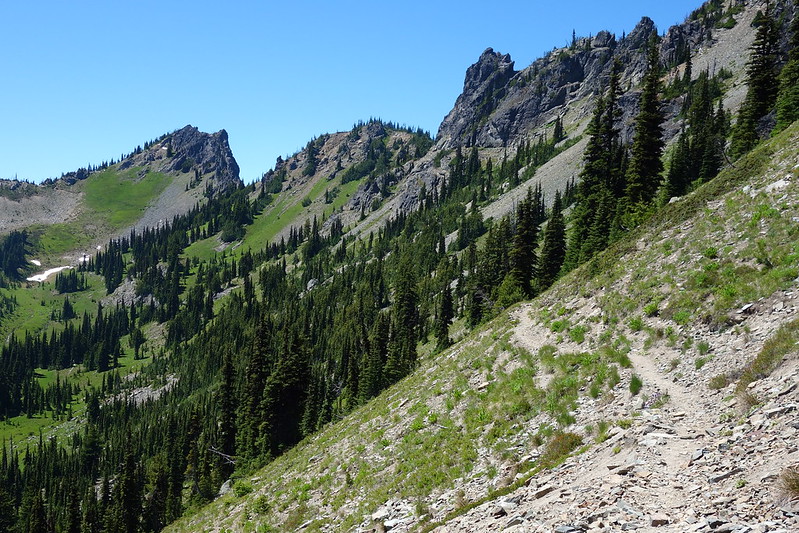 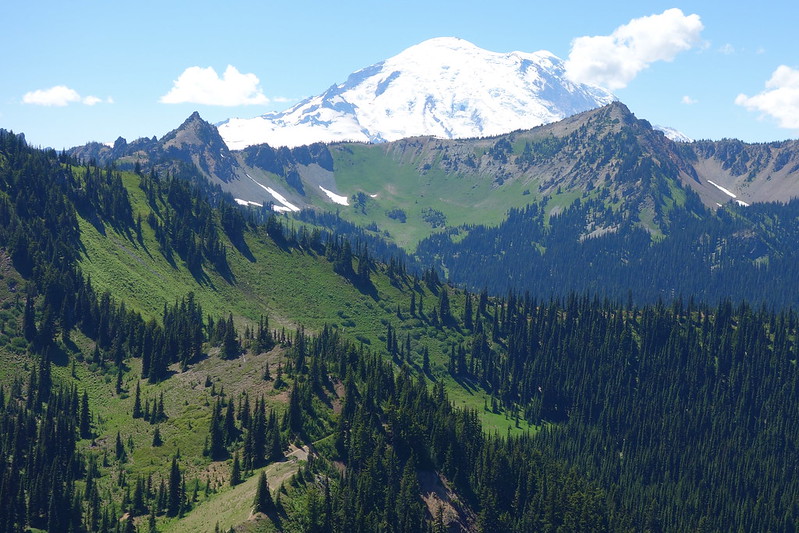 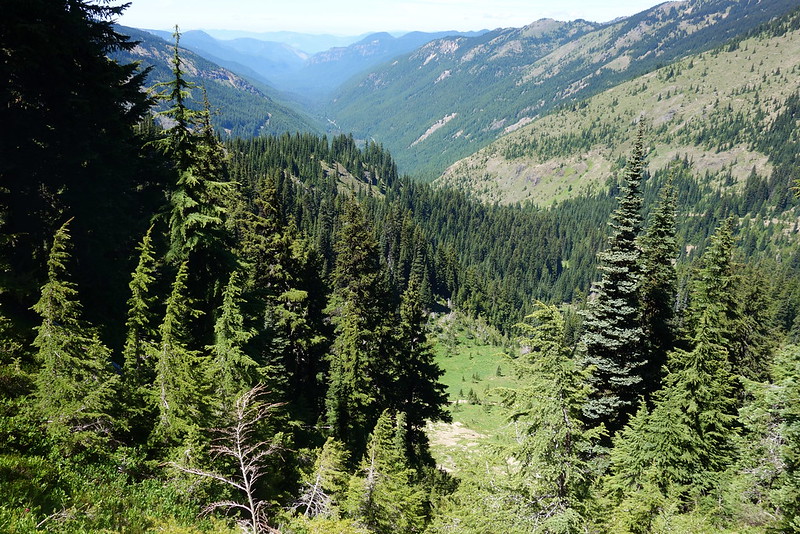 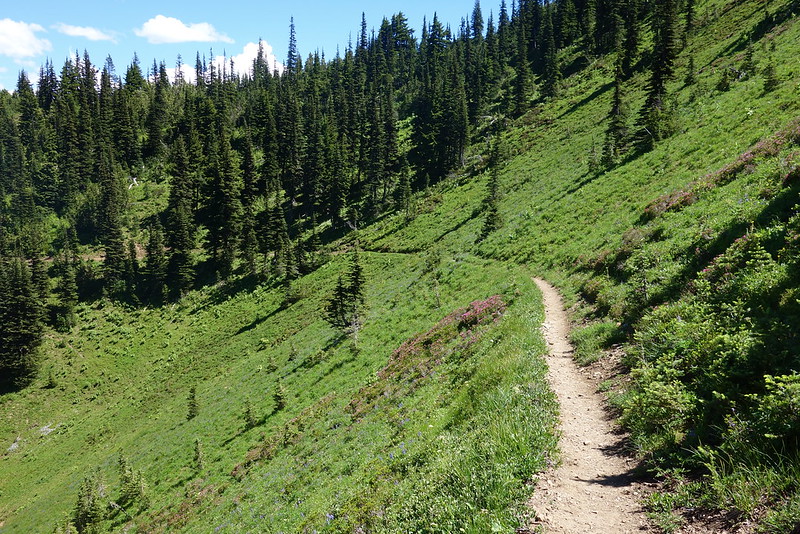 I wandered on autopilot for a couple rocky, eroded miles until Scout Pass, where I met a friendly, chatty dayhiker out from Seattle. I told him I was from Portland, and he smiled broadly. “You can see Mount Hood from there!” I smiled back, not knowing quite what to say, but he just continued on unabated. “You know, if you found the right ridge, you could probably see Mount Hood from here, too. Your home mountain!” My home mountain!

As I said goodbye and continued on, sidehilling across the Lakes and Big Crow Basins, I imagined that, if you found the right ridge, maybe you could see the whole world from here. 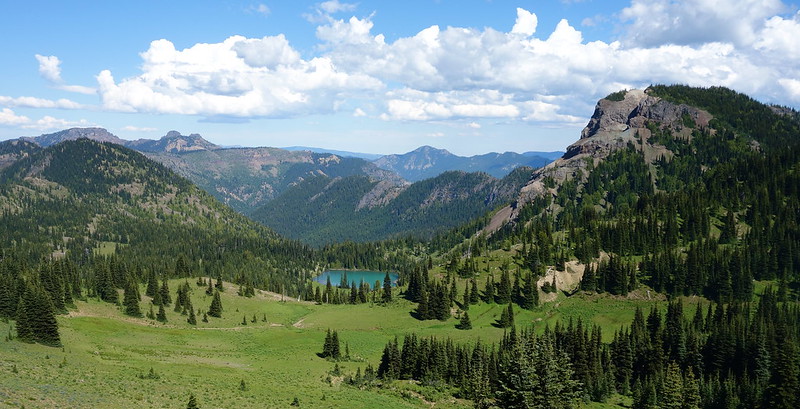 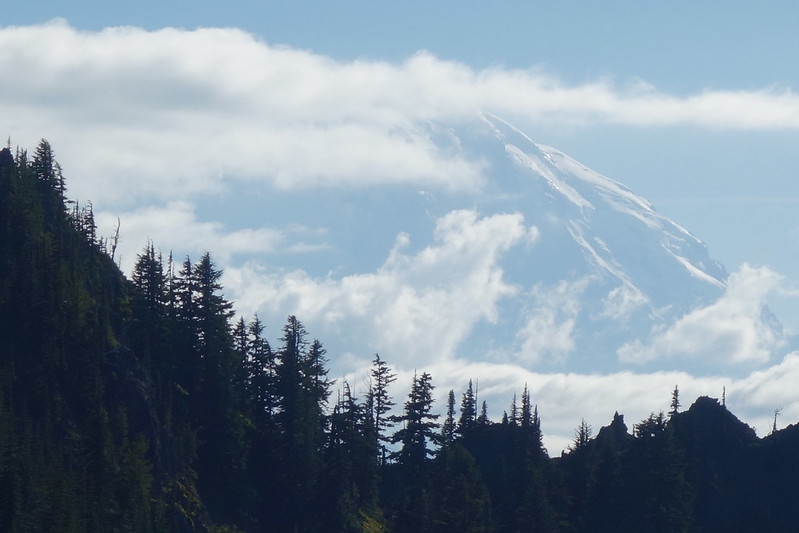 Eventually the ridges faded to flatter forest, which passed easily in the early evening light. Camp tonight’s an unnamed spring in a deep patch of old growth just below Arch Rock. I put things up quickly a couple of hours ago, spent a while washing off my arms and legs and face in the barely trickling water, and ate a slow dinner as the shadows grew long and the sun became a gentle glow. No bugs tonight, so I’m sitting outside, writing and drinking and all the rest on a moldering old log that’s sinking into the loamy ground at the edge of camp. There’s an owl hooting somewhere a little up the hill, and a deer just passed a little way down. It smells like everything all at once.