I arrived at Snoqualmie Pass yesterday so weary, so sick of clearcuts and dry dusty roads. But I woke up this morning feeling great, ready to keep going. And the Alpine Lakes is so far just an absolute wonderland.

I checked out of the hotel this morning at first light, and walked a half mile on the side of the broad, bright, black frontage road in the rising sun: past out of season snow plows parked in an unused lot; under the interstate, already crowded enough to echo through the underpass; and finally to a sprawling trailhead, full of just two cars, parked at opposite ends.

For the first few miles the trail passed through pleasant, if uneventful, forest. In quick succession, I met the owners of the trailhead’s two lonely cars. The first was a woman about my age, so happy to be out that she seemed unable to contain her joy, as if there were so much of it flowing into her that it couldn’t help but flood out, soaking an ecstatic path behind. I passed her on a sort of nasty blowdown—the first of many—but she was just glowing. “Look at all of this!” She waved her hand vaguely in the direction of an unseen spectacle. “Have you ever been here before?” I hadn’t. “Shit. Man, I wish I could see this all again for the first time. Just wait for what’s coming.” 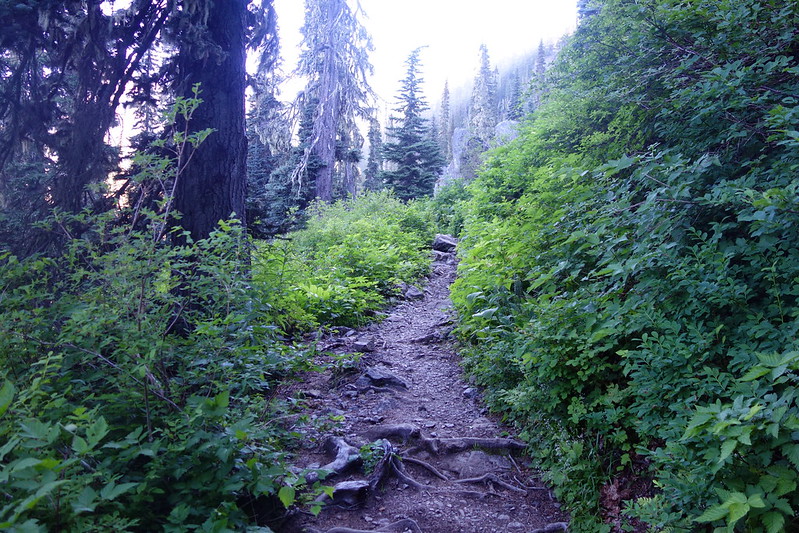 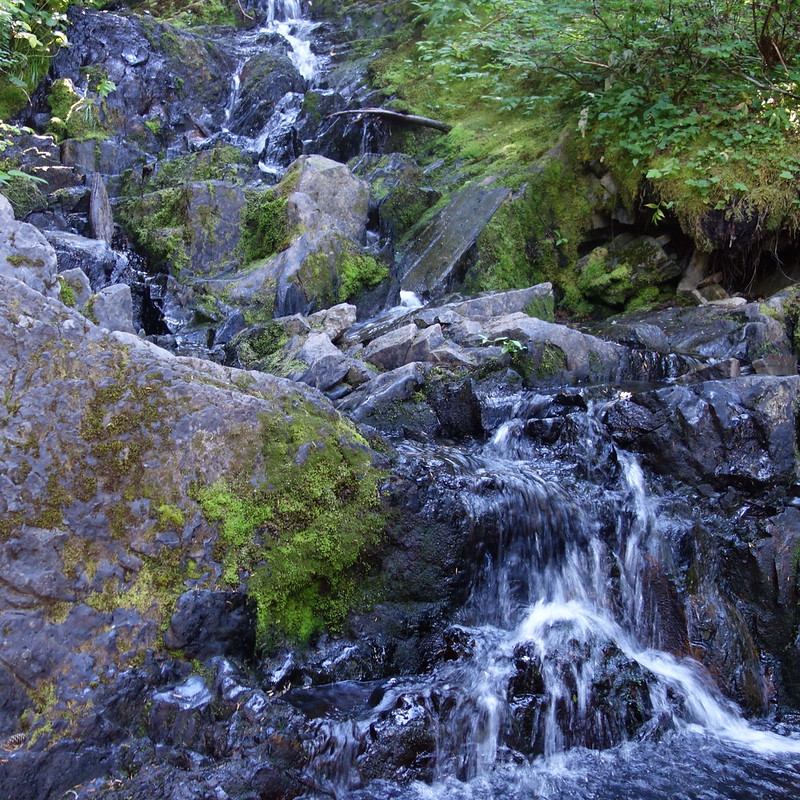 The man from the second car hadn’t been here before either, and seemed singularly unsatisfied by what he’d seen so far. So I tried to marshal some of the woman’s joy. “It apparently gets really beautiful in a little bit!” He seemed skeptical.

He shouldn’t have been.

As soon as the trail broke from the trees, it emerged in to a world of ridges that stretched all the way back past Mount Rainier, and all the way forward to Glacier Peak. And there were flowers: heather on the rocky ridges above the trail, paintbrush and lupine in the understory, these friendly yellow things I couldn’t identify… I walked spinning, taking pictures of everything, though I don’t think I’ve captured it at all—the ecstasy of sun and flowers and rock and, perhaps most of all, an unscarred world. 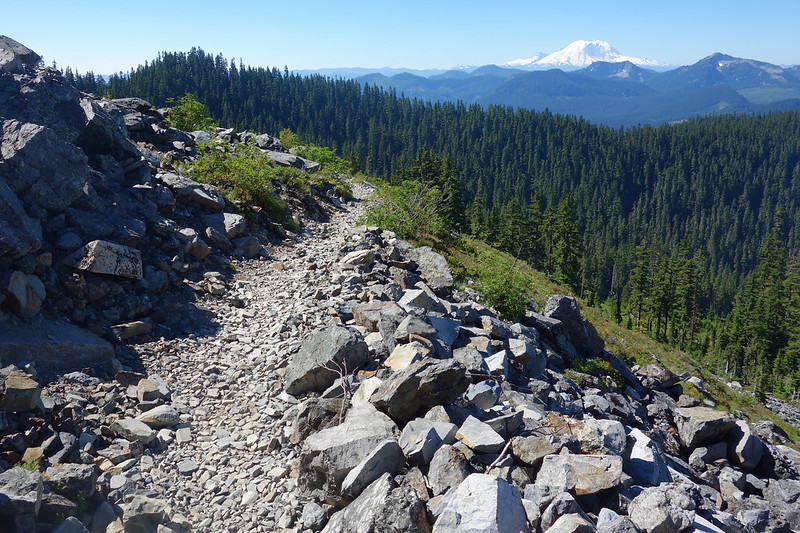 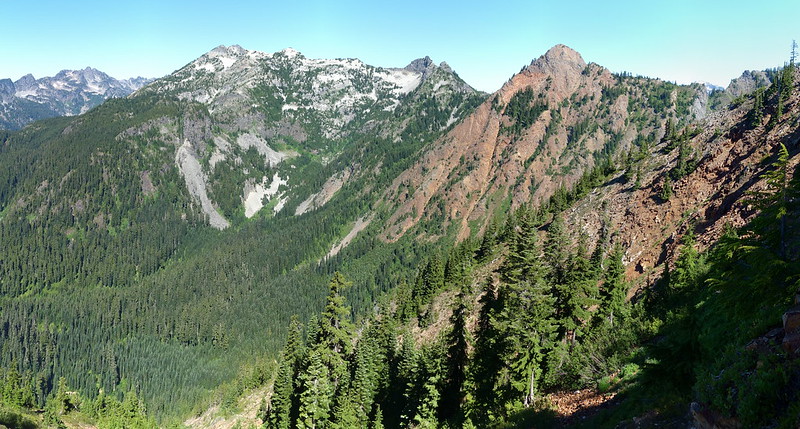 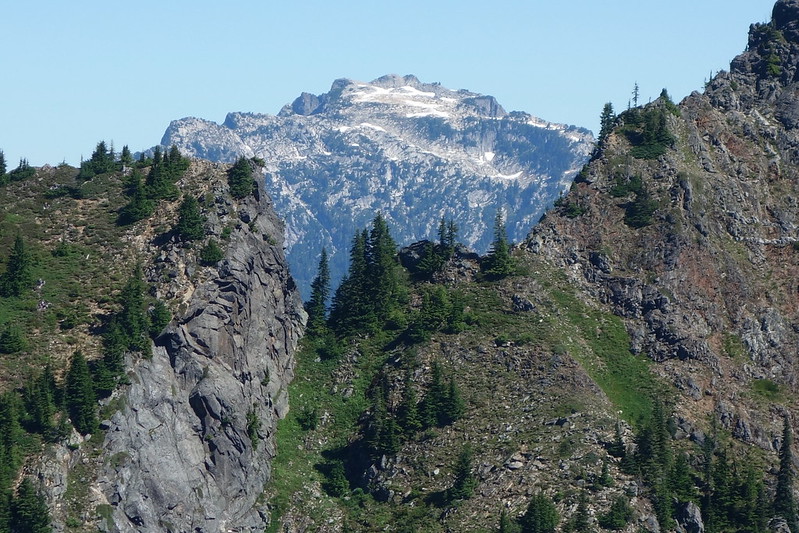 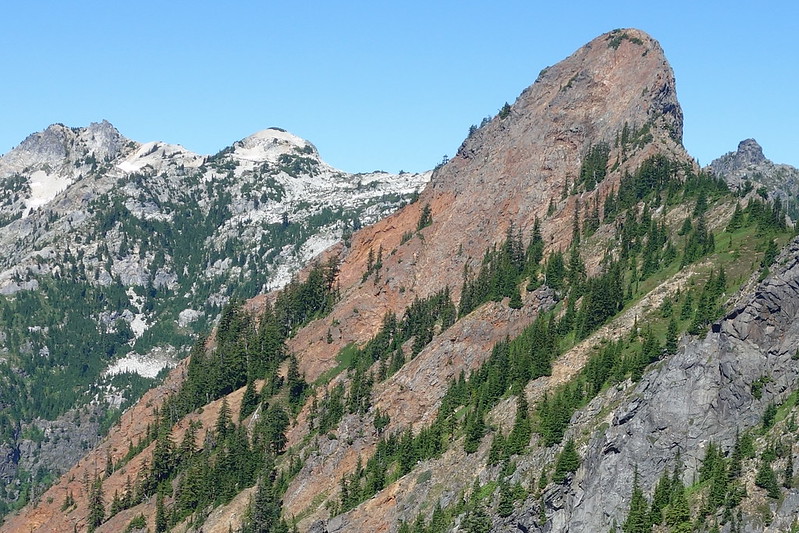 The trail traipses across a minor pass just north of Kendall Peak, then becomes a broad catwalk, overlooking Silver and Gold Creeks as it continues north toward a jumble of mountains—Thomson, Alaska, and Huckleberry—each hiding a lake in its shadow. 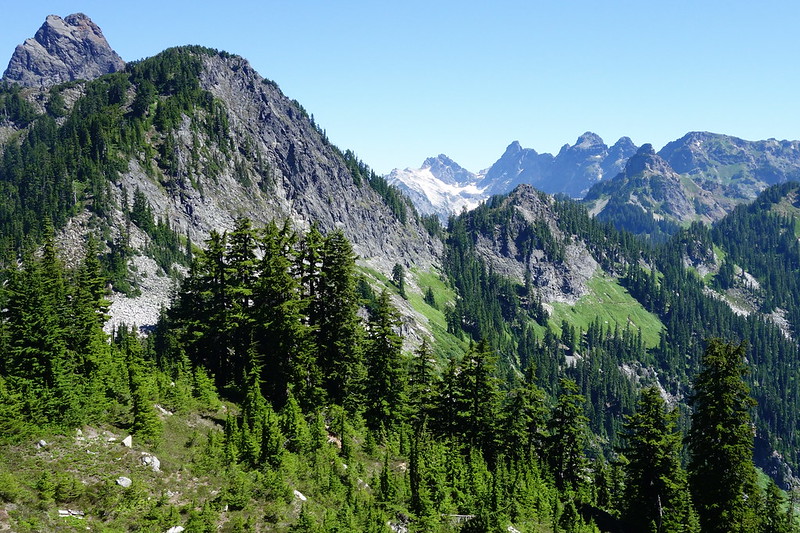 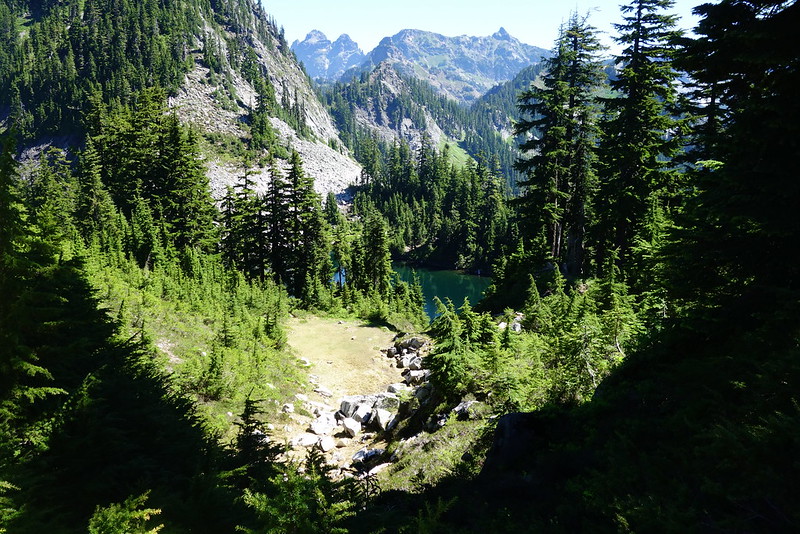 I stopped here maybe half an hour ago, to chat with a slightly older couple of women wearing wonderfully bright colors, who sat on the shore serenely slapping mosquitoes off of every bit of exposed skin while they asked me kindly questions about the hike. “What’s been your favorite part so far?” Goat Rocks.” “The hardest?” Missing my wife. “Yea.” There was a long pause. “Yea.” One reached for the other’s hand. “I’m glad we get to do this together.” 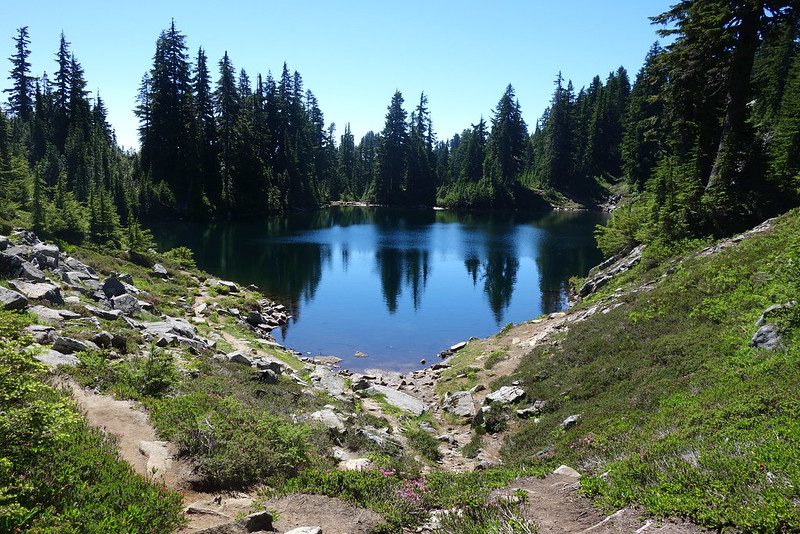 From the lake, the trail began a long traverse east above the headwaters of Gold Creek. As it passed under Chikamin Ridge, the tread became more and more faded until, in spots, there was only a thin line of dusty rocks to mark the route. On the steeper slopes, it was sometimes so eroded that I walked sideways, facing uphill for better traction. It took three hours to walk a little more than five miles. But man: it was still so beautiful. 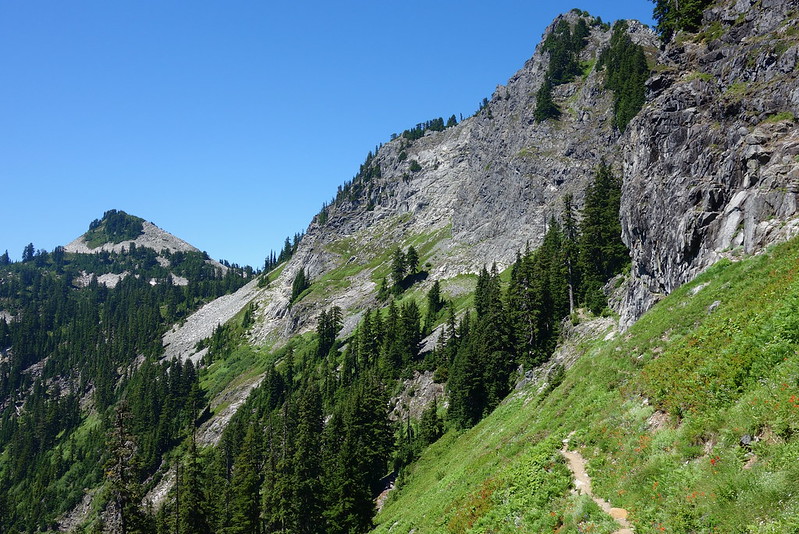 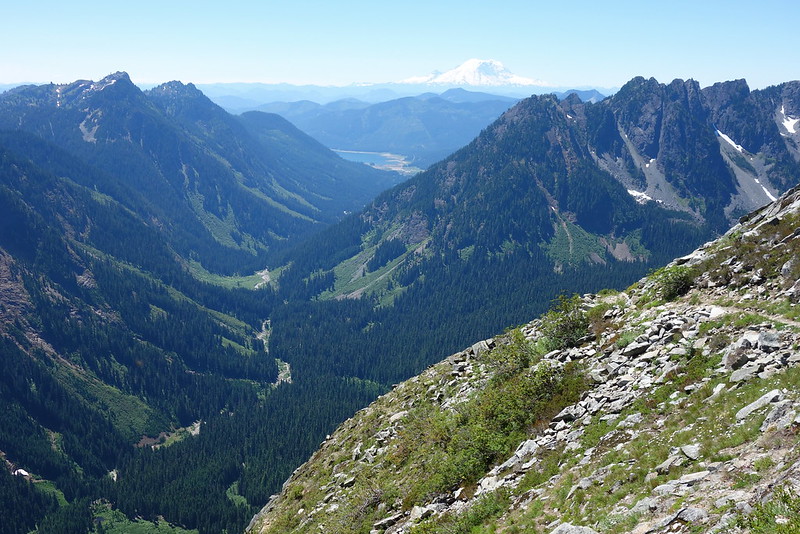 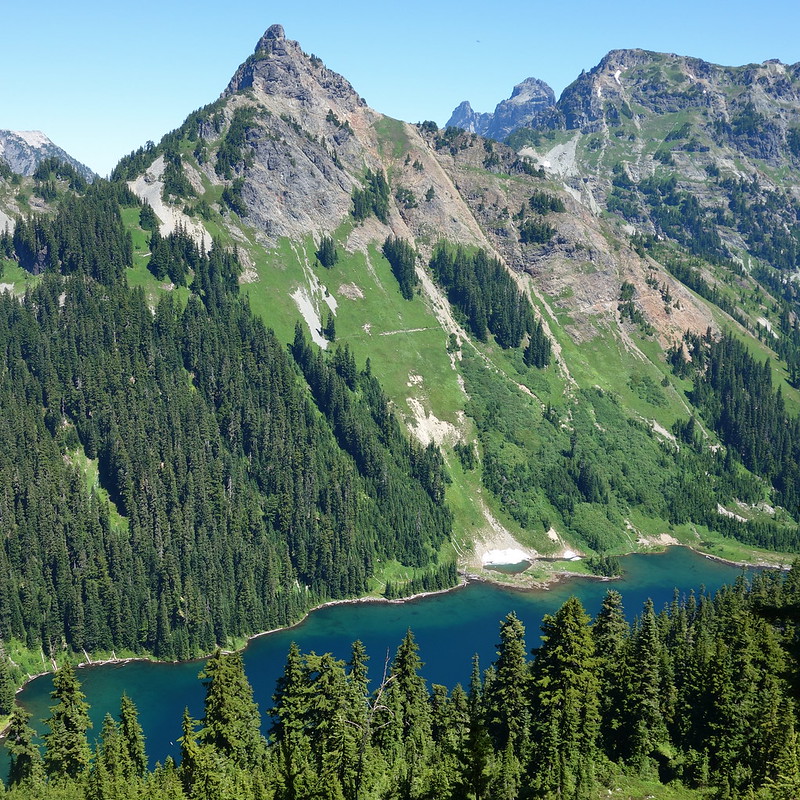 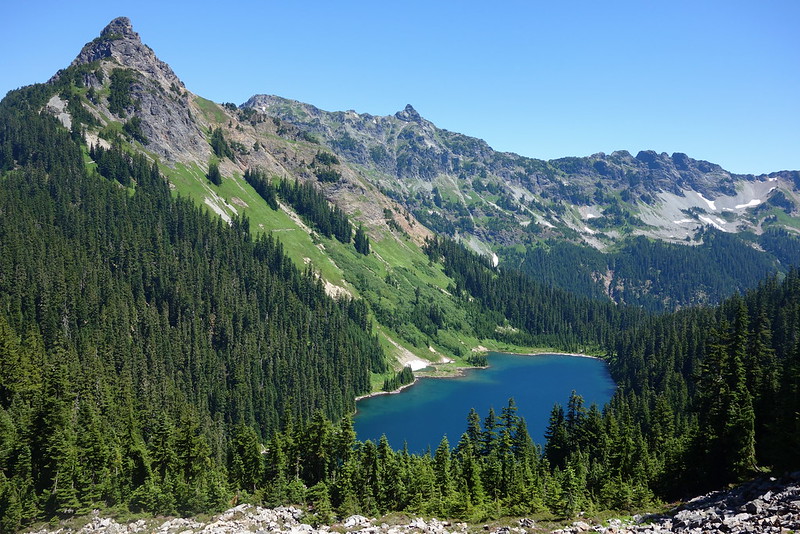 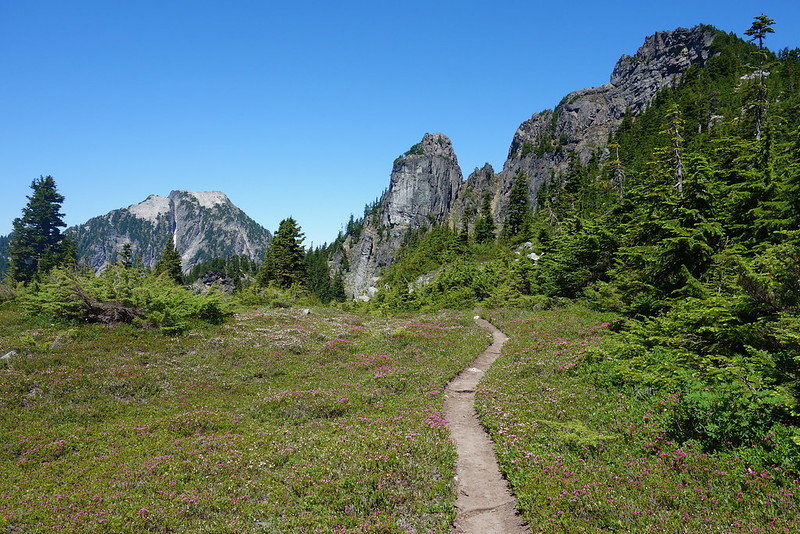 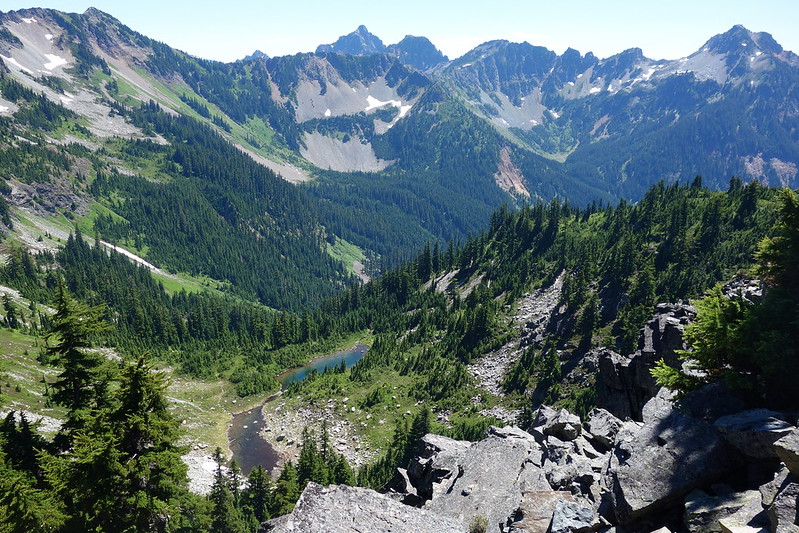 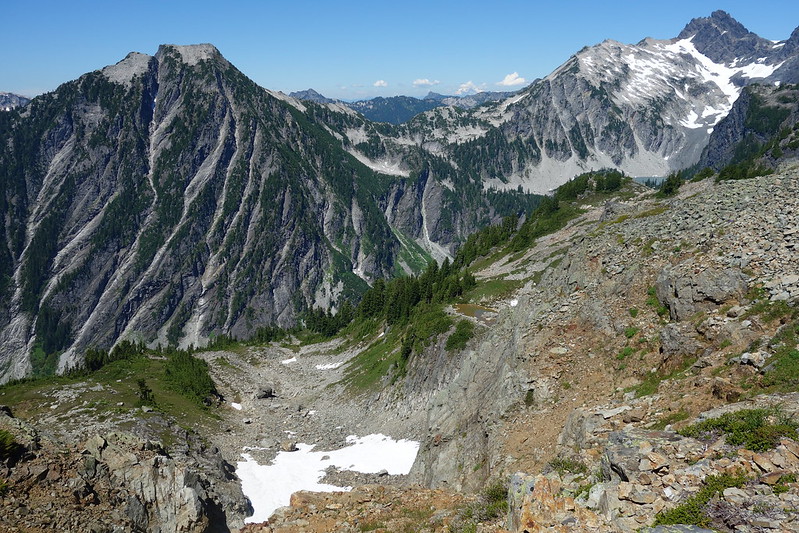 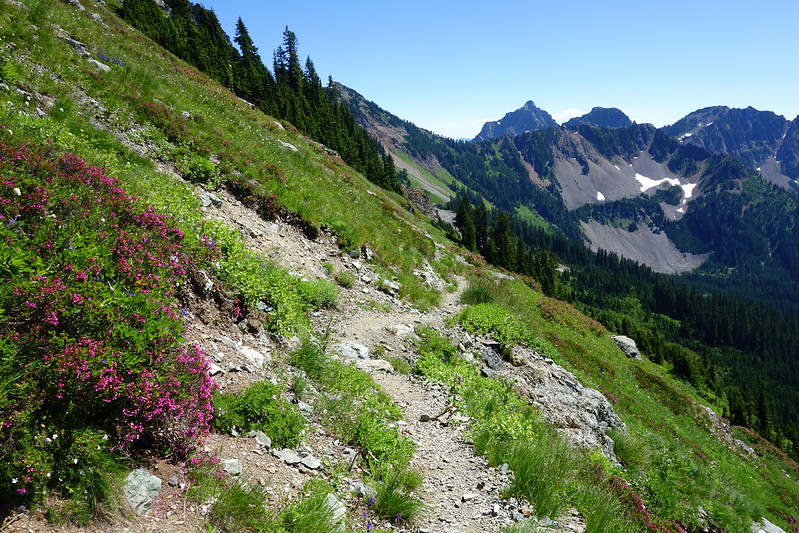 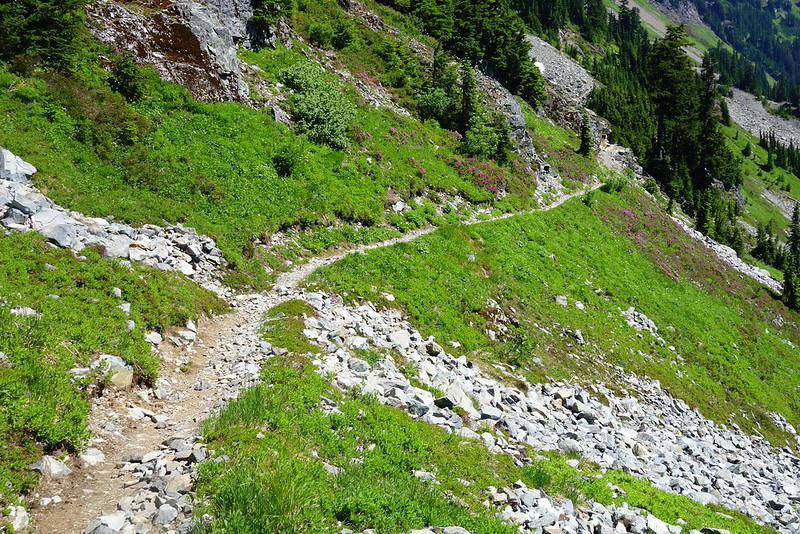 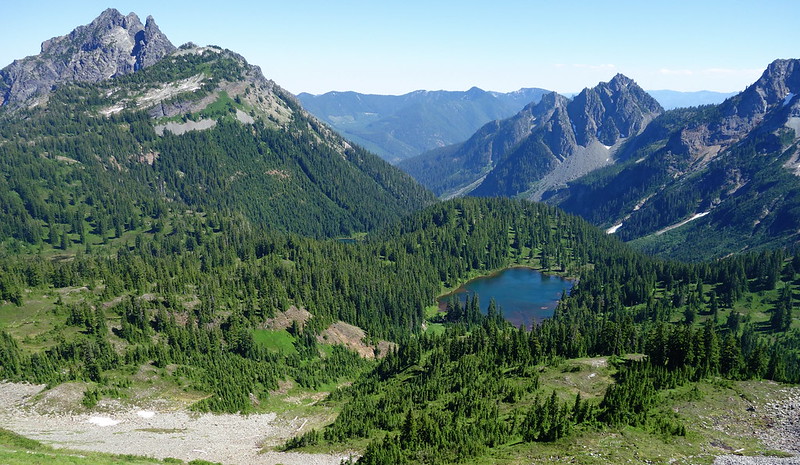 I felt like I’d been walking forever, but eventually the ridge did give way, and the trail cut east, down into the Park Lakes basin. The basin was beautiful too—full of a half dozen ponds, many seemingly fed by nearby springs or melting snow—but it was also very, very buggy. I decided to push on without lunch, thinking that it was probably better to be empty of food than blood. 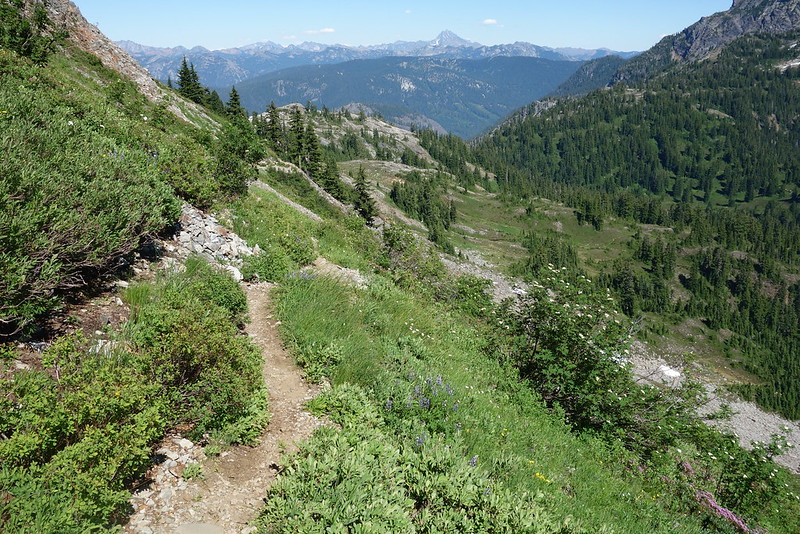 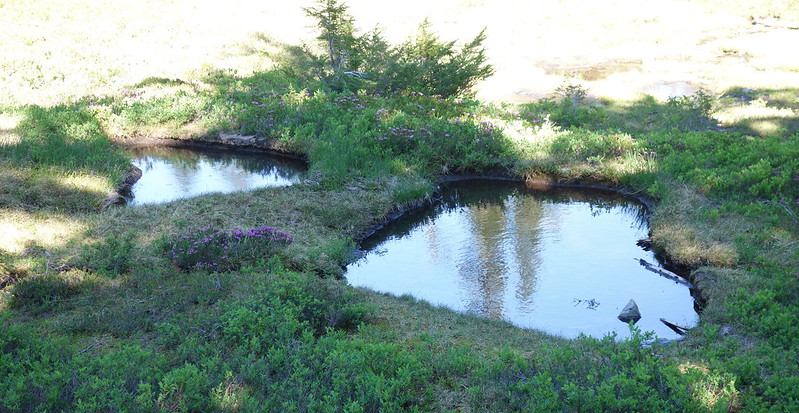 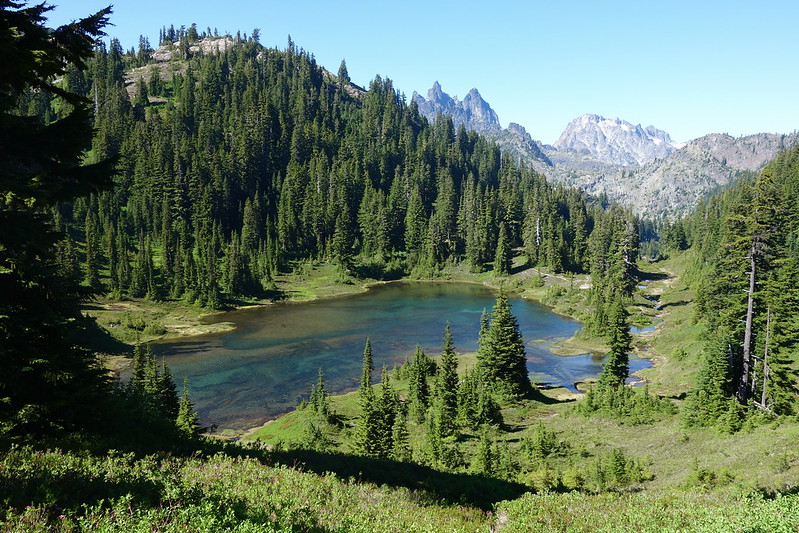 Eventually the trail dropped out of the basin, through another minor pass between Four Brothers and Three Queens—one wonders how they handle the imbalance—where I stopped for a quick couple handfuls of trail mix and to filter a liter of water I’d picked up in the basin. 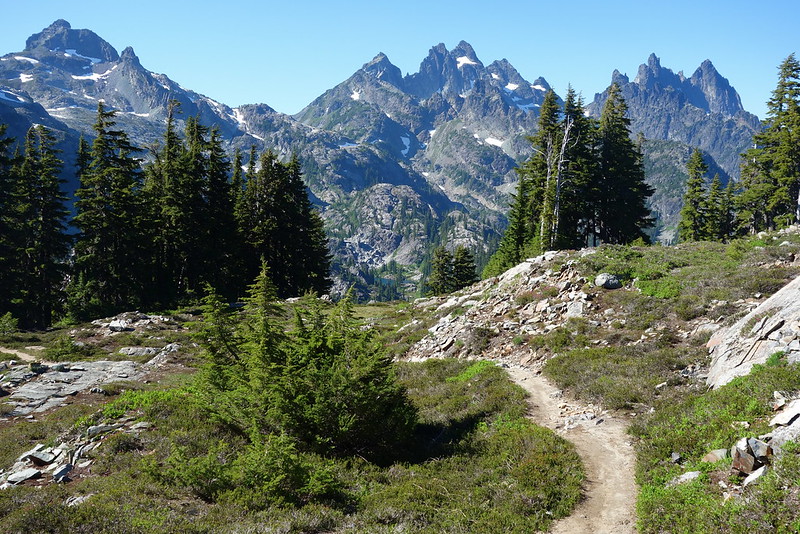 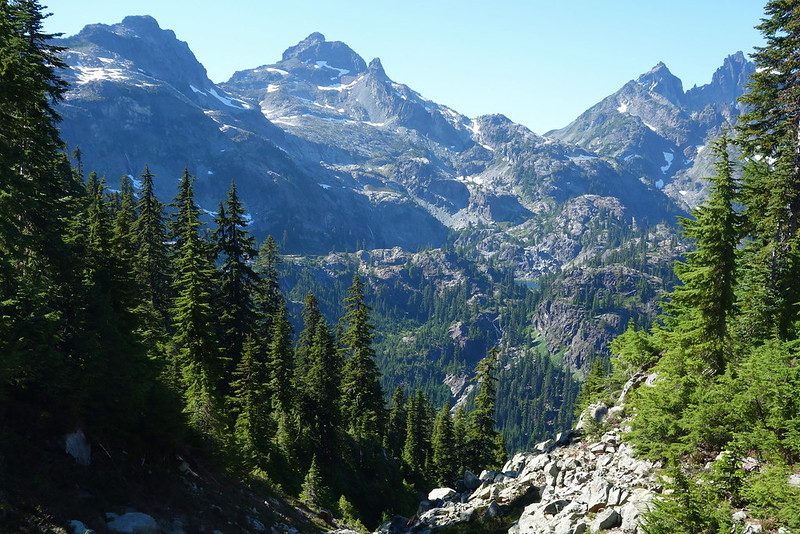 The trail then descended steeply toward Spectacle Lake and entered the trees, half of which seem to have fallen down in the middle of the path. At one point—a steep switchback obscured by a fallen giant—I miscalculated, slipped, and slid five or six feet down onto a rocky ledge. I stopped with no problem, but my leg got badly scratched in a few places, and was bleeding a bit more than I would have liked. So I scrambled back up to the trail—or what I presumed to be the trail—and sat for a little to think. It was nothing too bad, really. The blood was more scary than anything. So I cleaned things out as well as I could with hand sanitizer (note: this works, but is not terribly pleasant), duct taped some gauze onto the worst parts, and continued on, down toward the lake. 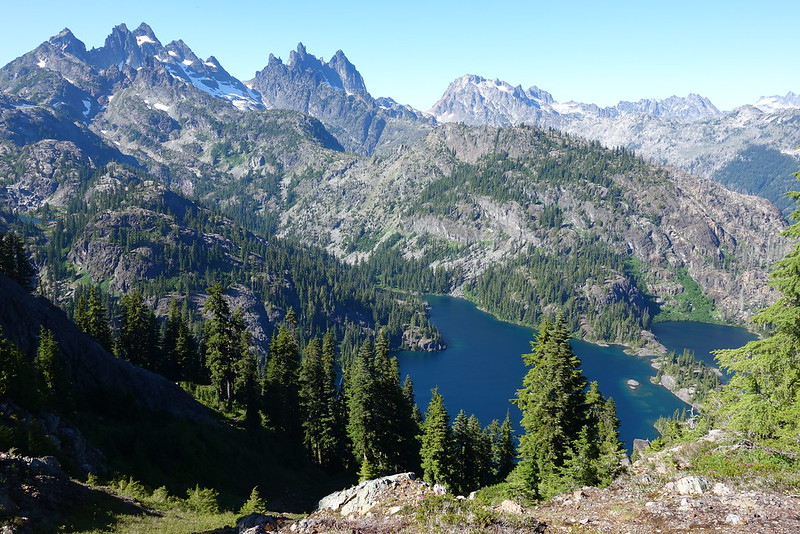 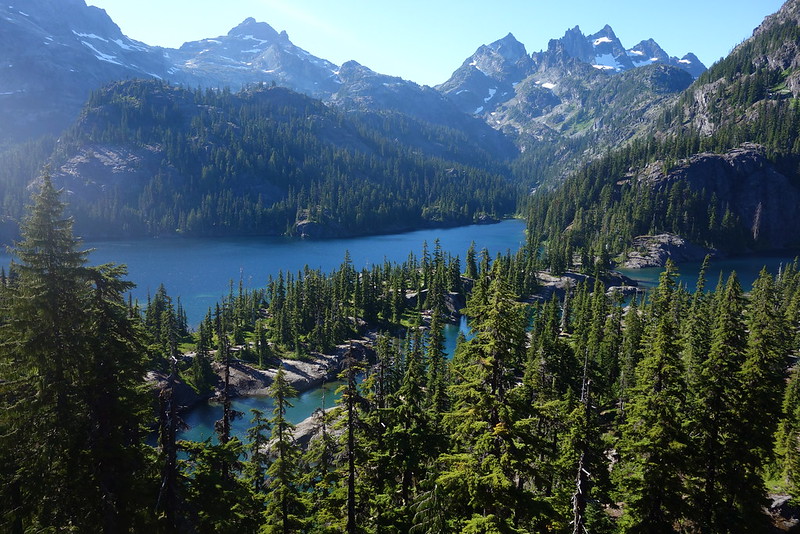 Spectacle Lake is miraculously beautiful. Like: the sort of thing that really doesn’t feel like it should exist. And, at least right now, it’s also miraculously empty, both of people and bugs. I made camp on a rocky bluff on the eastern shore in the late afternoon, washed the blood off my legs and clothes, and went for a wonderful swim, almost all the way across, as the light grew long and the hills above began to soften. 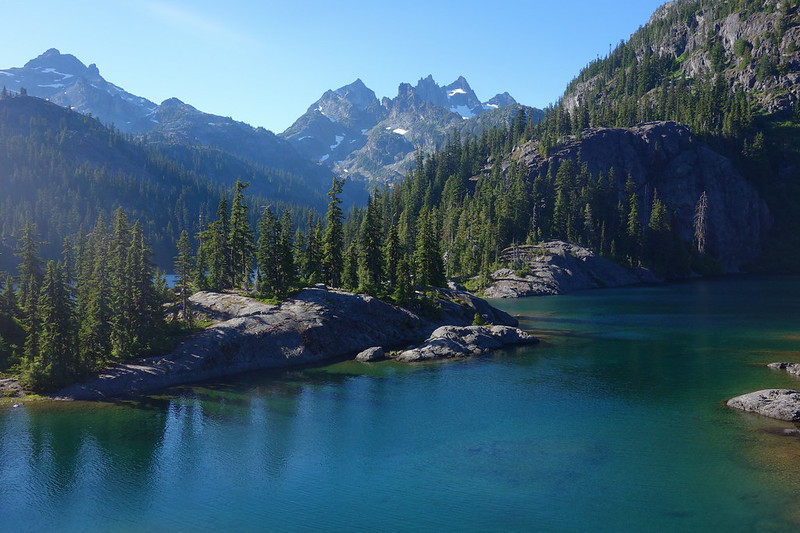 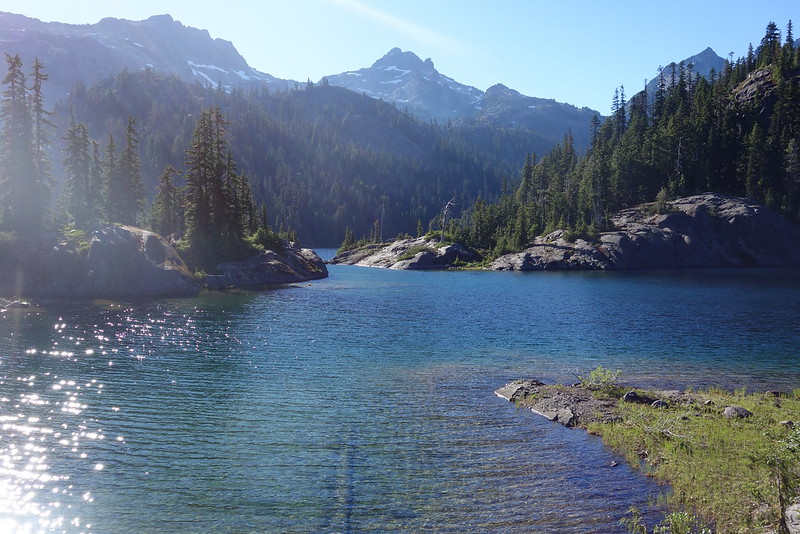 As the afternoon faded into evening, I was joined by my only company for tonight—a family of four, two young-ish parents and two brothers, maybe five and eight. I ate dinner sitting on the shore with my feet in the water, watching the boys play across the way, and thought of when my parents used to take my brother and I out like that. When we started, we would have been about that age: me the wild five-year-old, jumping off boulders into shallow water, and my brother the quiet, protective older one, playing in the dirt, building imaginary worlds out of small rocks and mud at the water’s edge, telling me that the trees at the bottom of the lake were dinosaur bones.

I watched them across the way as it got dark, and the parents told them it was time to come in. And I thought of something I read a while ago, from Neil Gaiman:

Grown-ups don’t look like grown-ups on the inside… Inside, they look just like they always have. Like they did when they were your age. Truth is, there aren’t any grown-ups. Not one, in the whole wide world.

I thought of that, and of my brother’s dinosaur bones, and of what a good job my parents did. And I started to cry in that way you only do when you’ve grown up, not exactly at being sad, but at being acutely confronted by life’s shape. At the strangeness of time. At the worlds you built with your brother at the edge of the lake.