I woke up in the best mood—late, long after my ranger friend had gone, to absolute silence but for the rushing river. And I had breakfast on the bridge, with my legs dangling off the edge, thinking about maybe just staying there all day. I could swim, wade up the river to those distant hills, float back down to camp…

But restlessness got the better of me, and in the late morning I headed out, just for a couple more miles up to Deep Lake and Peggy’s Pond.

The trail along the northern shore of Waptus Lake was beautiful, through dense forest, crossing creeks at every curve. It reminded me of the Gorge—maybe that stretch of the Oneonta Trail just south of Triple Falls, where, in winter, all the little feeder streams cut across. I remember the first time I went there, with Krista of course. The whole place seemed enchanted.

I’ve been missing home today. Not like I did a couple weeks ago—not panicked or desperate—but in a dull, deep way. Like a creaking voice in an old country song. 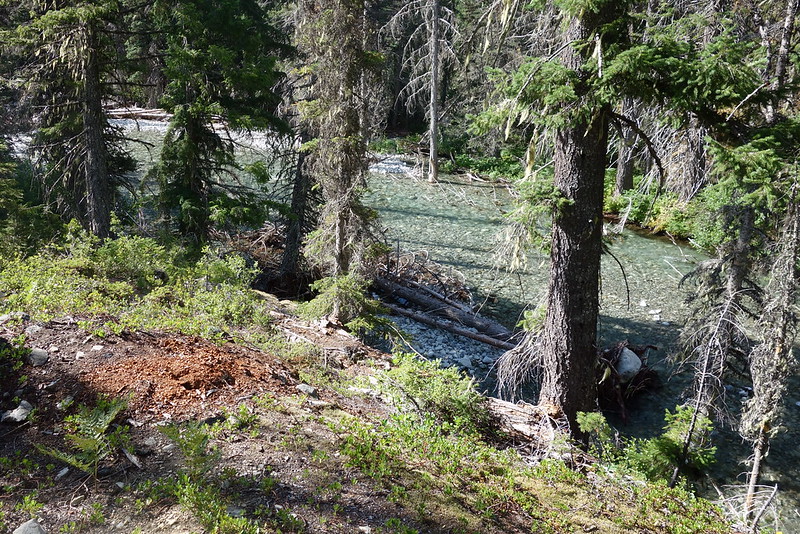 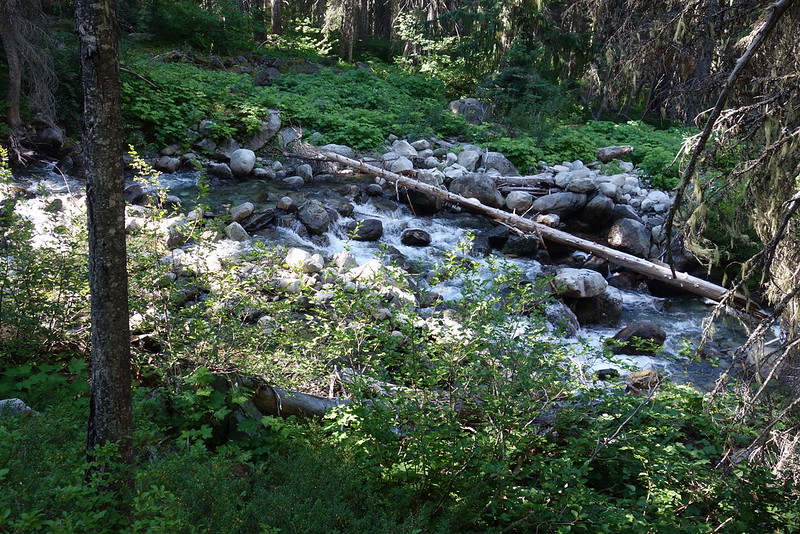 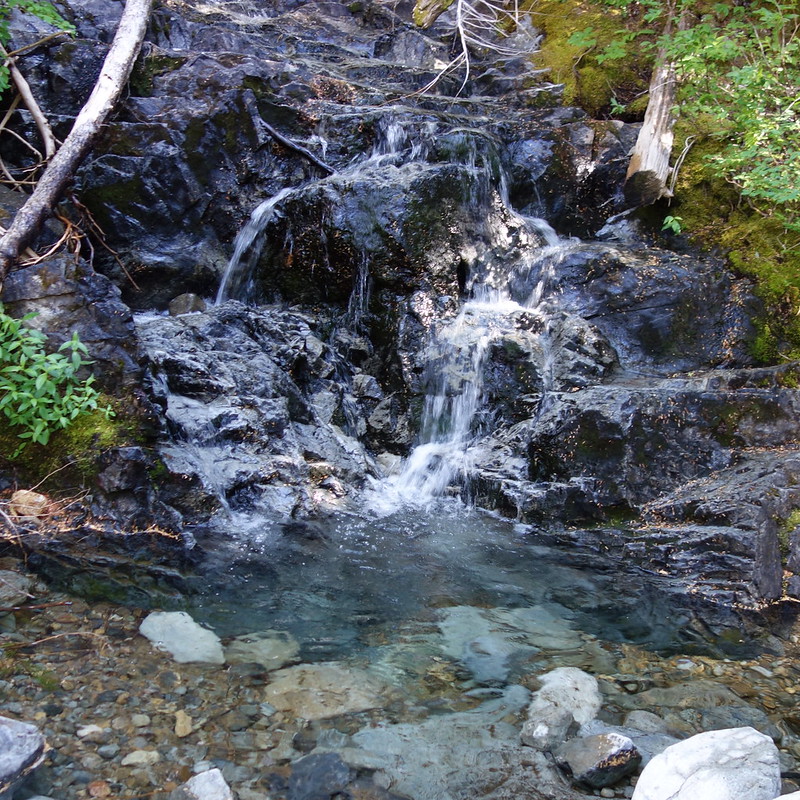 After the lake, the trail joins Spinola Creek, which it vaguely follows up through huckleberry fields toward Deep Lake. It was easy walking, but I still stopped halfway up to eat a few dozen berries and marvel at the pleasant, easy forest. 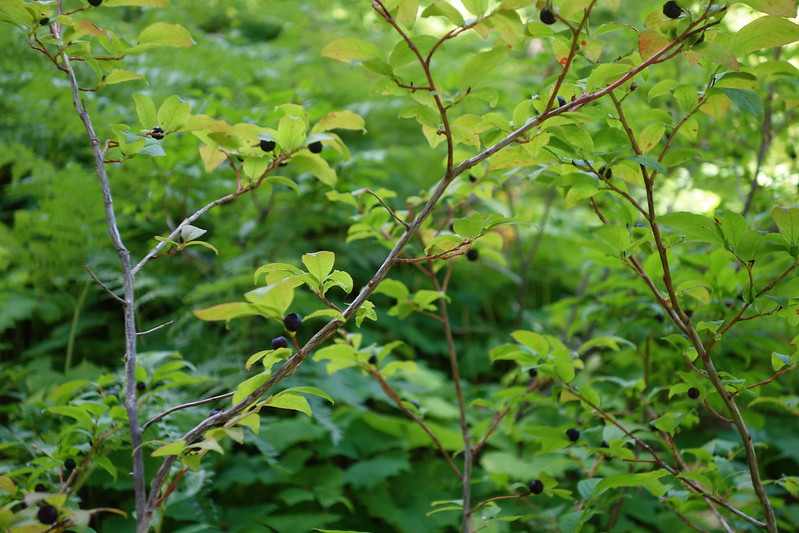 Exactly two weeks ago, on my first day out, sitting sadly somewhere south of Indian Heaven, I ran into a southbound couple who seemed to understand my state without me saying a word. They looked at me sympathetically: “You know, after a couple weeks, you’ll be walking on air.” I’ve been thinking of that today, hopping up the trail from rock to rock to root. I feel like I’m flying.

I stopped for lunch along Spinola Creek as it emerged from Deep Lake, and watched a family of tiny ducks bobbing in and out of the water, diving for food. Then it was up another thousand feet to the turnoff for Peggy’s Pond. 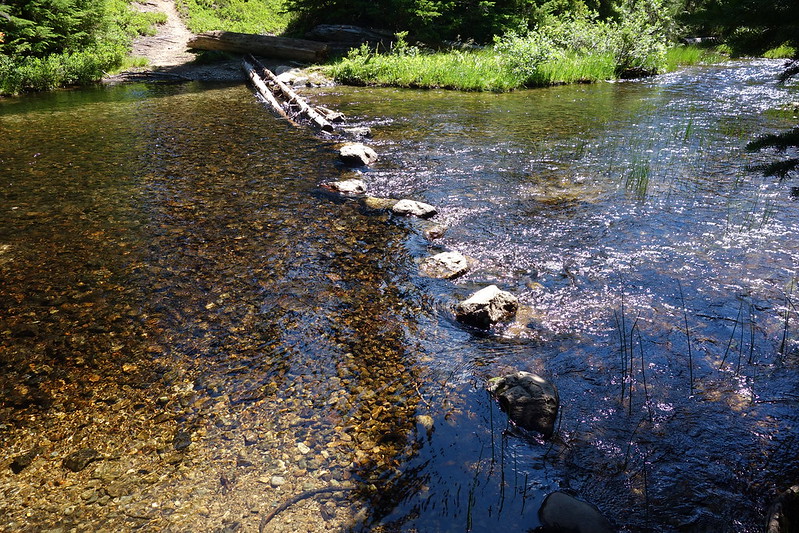 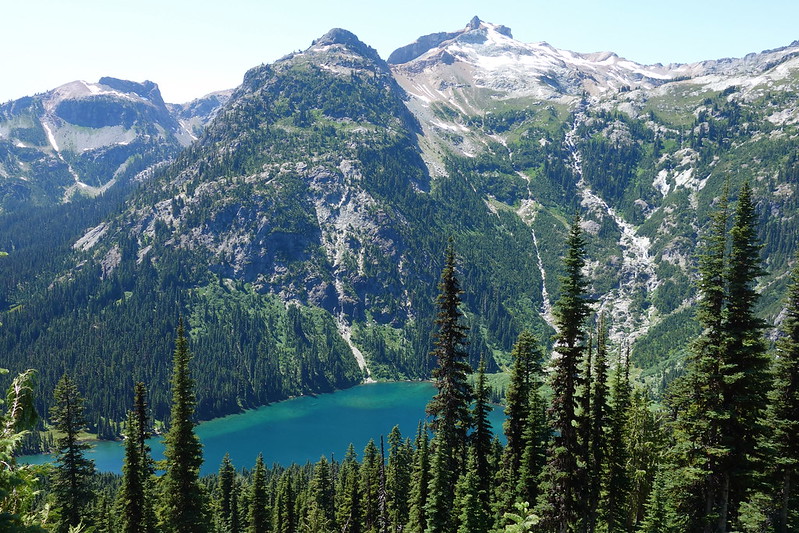 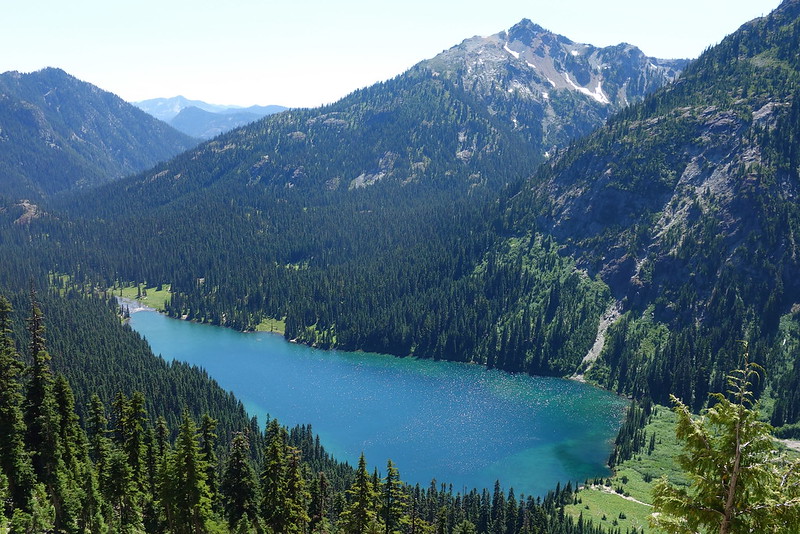 I was there almost before I knew it, then it was just a short, steep sidehill below Cathedral Rock to the pond and its unlikely plateau, empty but for thousands of flowers. 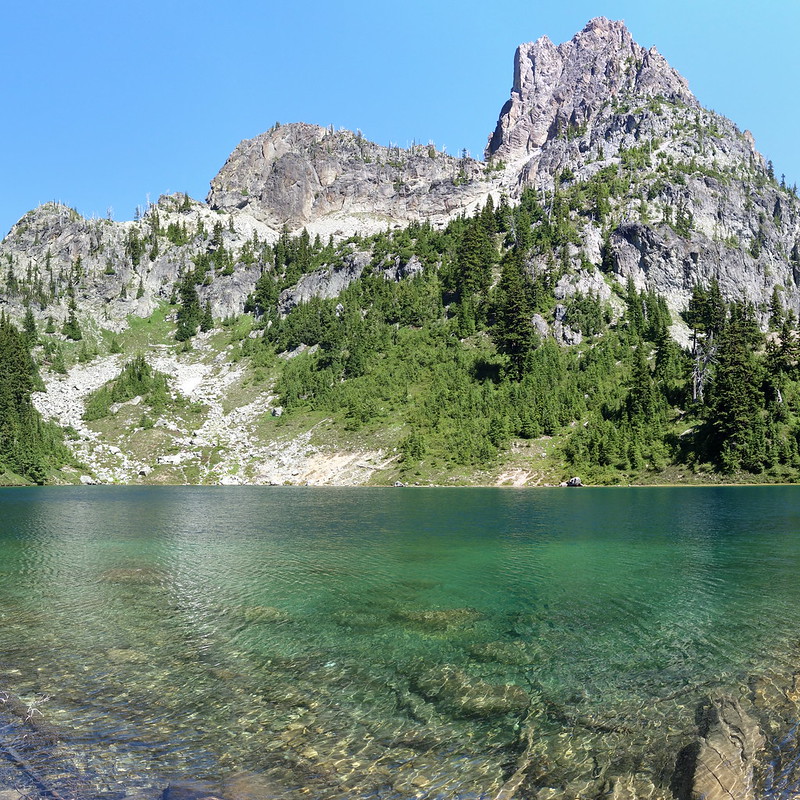 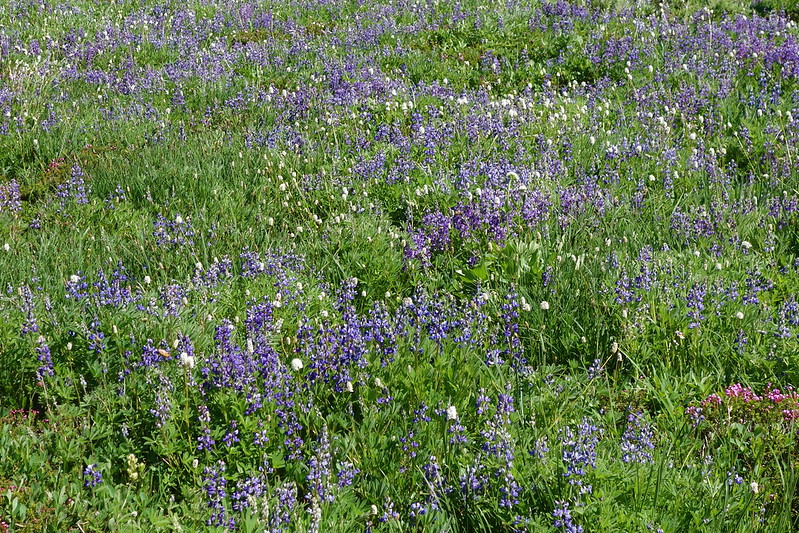 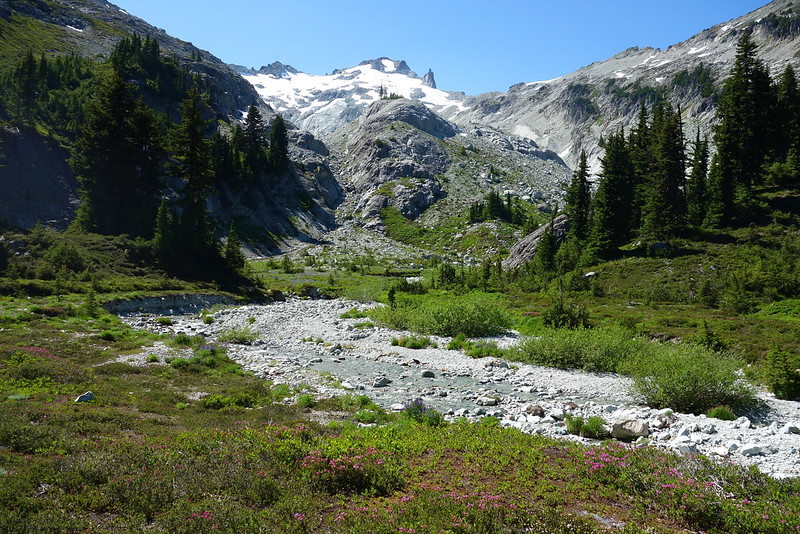 I set up camp half an hour ago, at the far end of the plateau, in the northern shadow of Cathedral Rock. It’s strange to be done for the day so early. I guess it’s time for a dayhike.

Man, what a glorious afternoon.

From camp, I followed a meltwater stream from the north end of the plateau west, up into a beautiful glacial basin at the base of Mount Daniel, surrounded on three sides by towering granite and melting snow and rocks all just ready to fall. 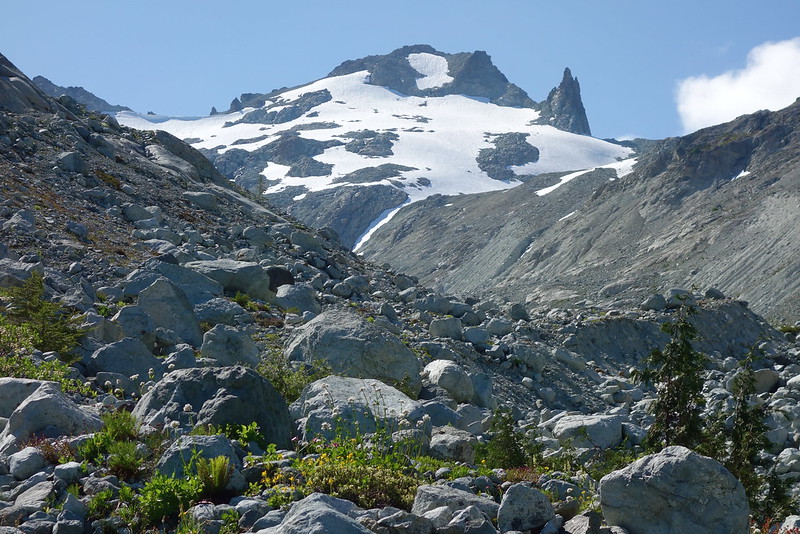 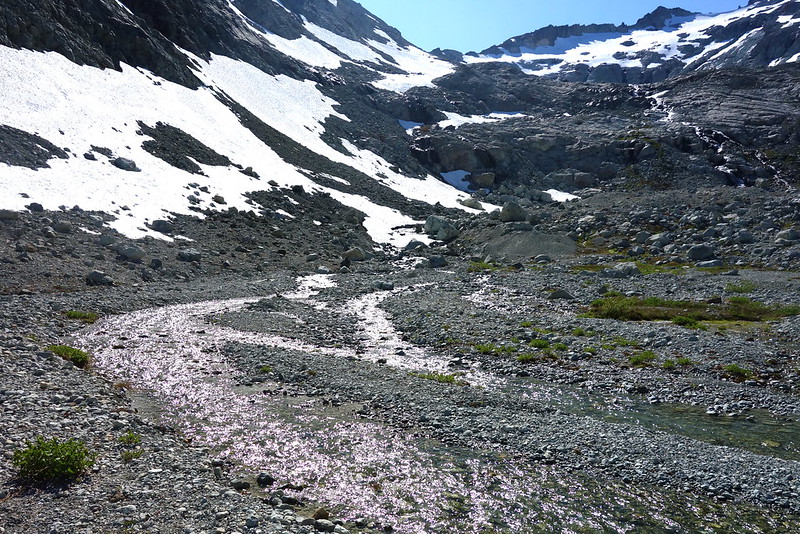 It looked at first as though I’d get turned around by a steep-ish granite wall only halfway up the basin, but the wall turned out to have a number of inviting cracks, and I followed them up, zigzagging between streams and snow and flowers and grass. 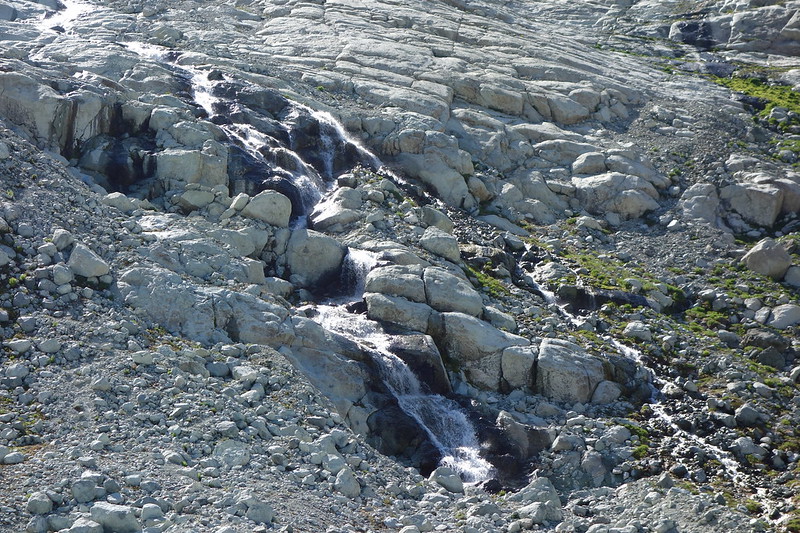 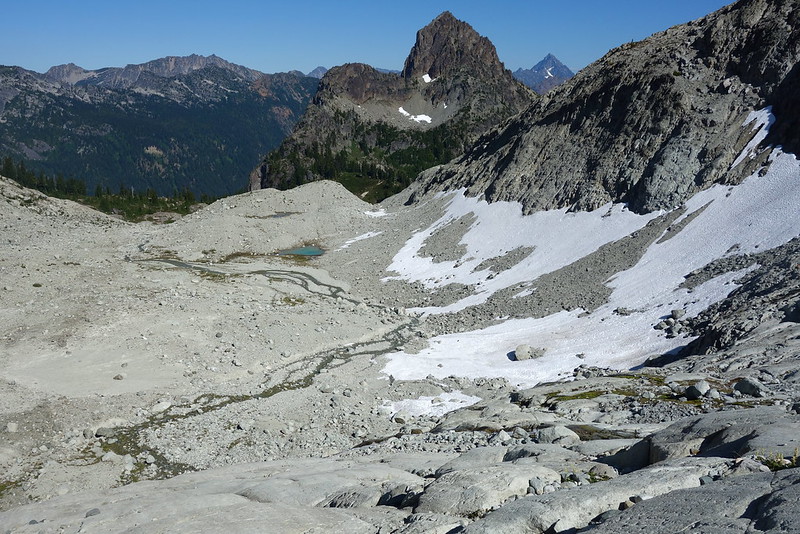 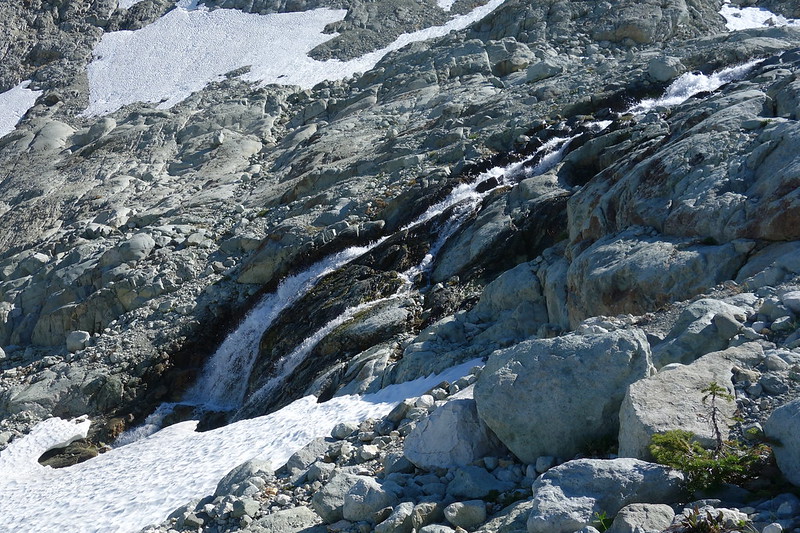 At the top, it was another world, full of snowfields and blue-green tarns placed improbably among the rocks and ridges. I walked around the edges taking pictures, but finally just sat down in the middle of it all, shifting every several minutes to get another view. 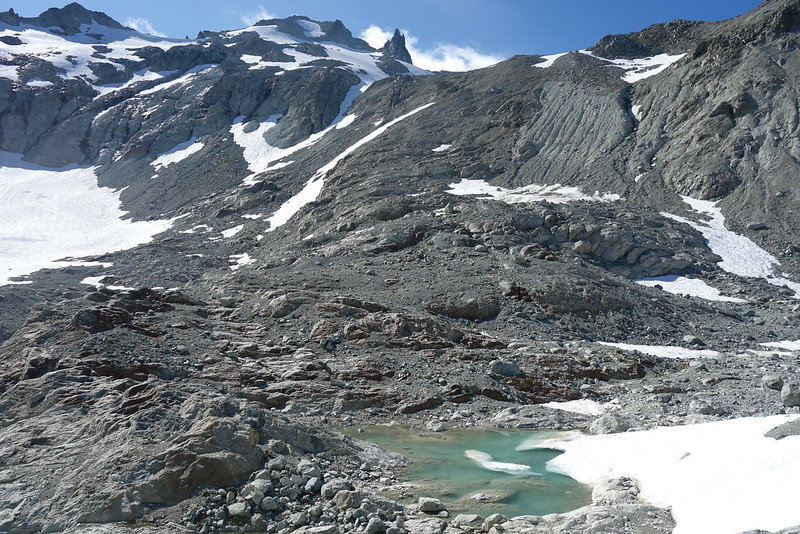 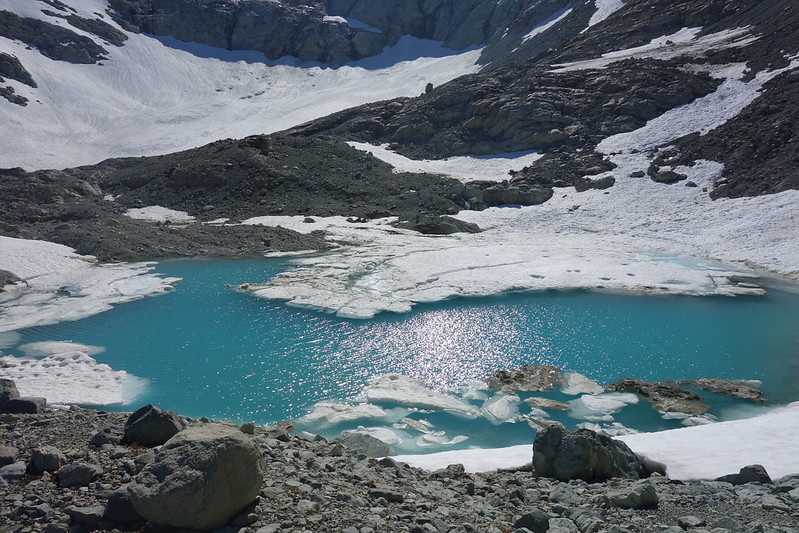 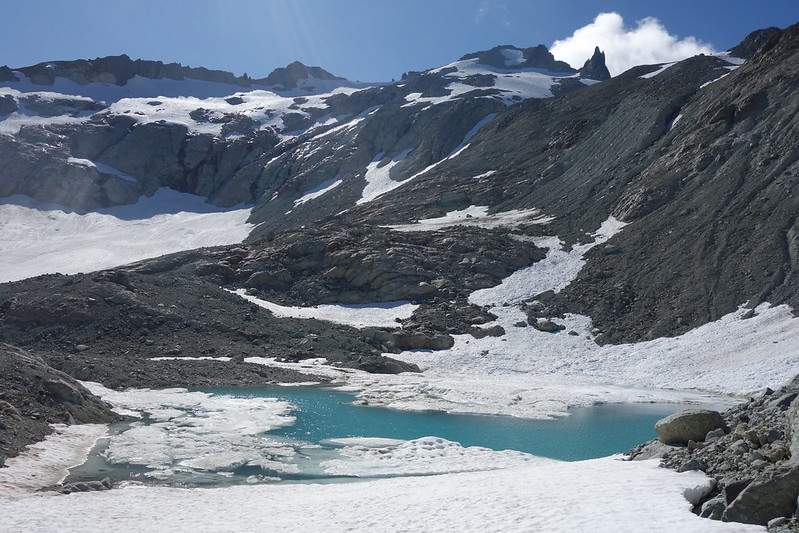 Eventually it was five and I’d promised myself I’d turn around by 4:30, so I got up and ambled down, punctual as ever, back the way I came. 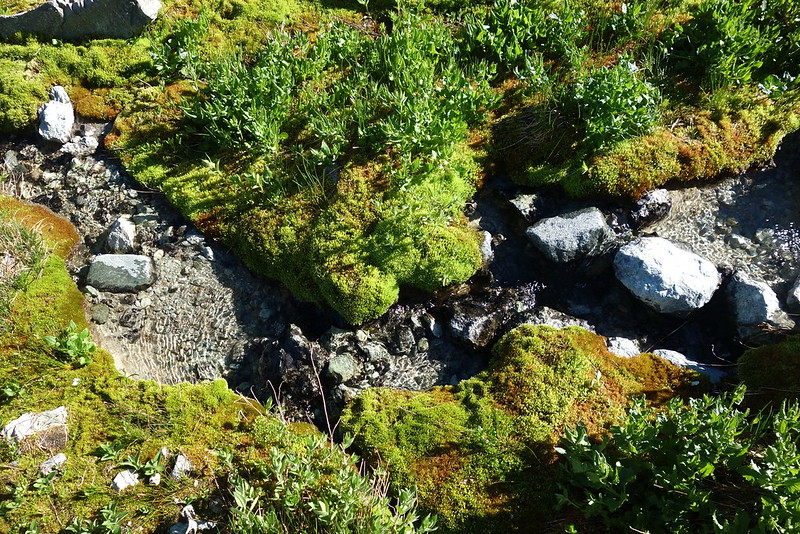 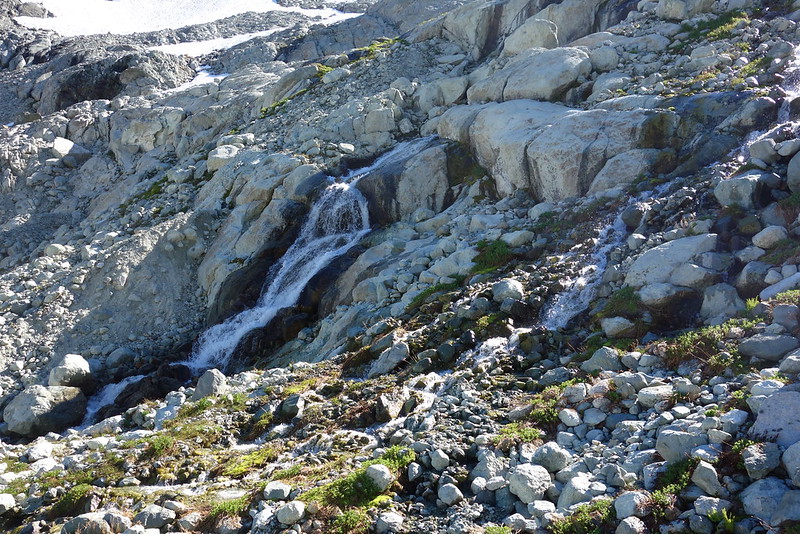 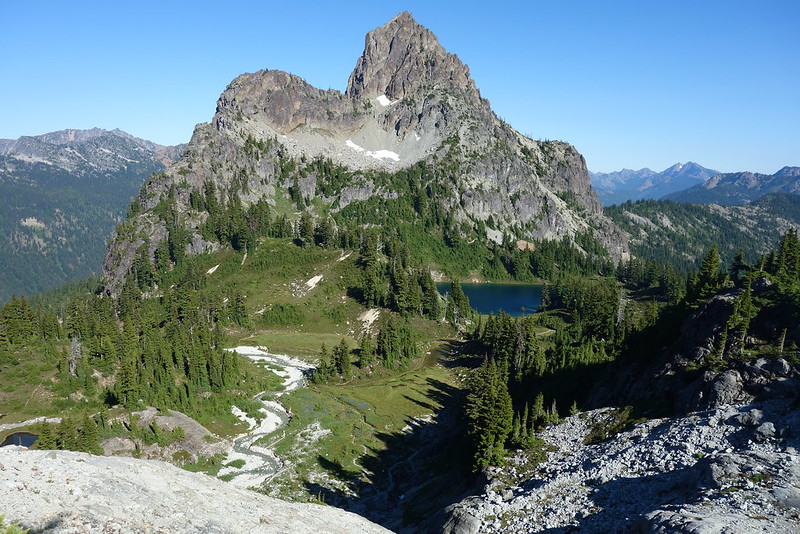 I ate by a meltwater stream just down from camp, running back and forth against the bugs, then took a short walk to the pond, where a couple—I think the only other people up here—were lying on the shore, watching the sunset, holding hands.

The night got cold just after, and I turned in early, peering out the mesh of my tent as the fading sun lit Cathedral Rock red, and my little lonely plateau faded out.