I woke up this morning to the sound of mosquitoes, who’d apparently woken up early, roused by the possibility of a hot breakfast. I ate in the tent, watching them buzz expectantly across the front mesh, then packed up gingerly and ran away, back along that rocky hill to the PCT. 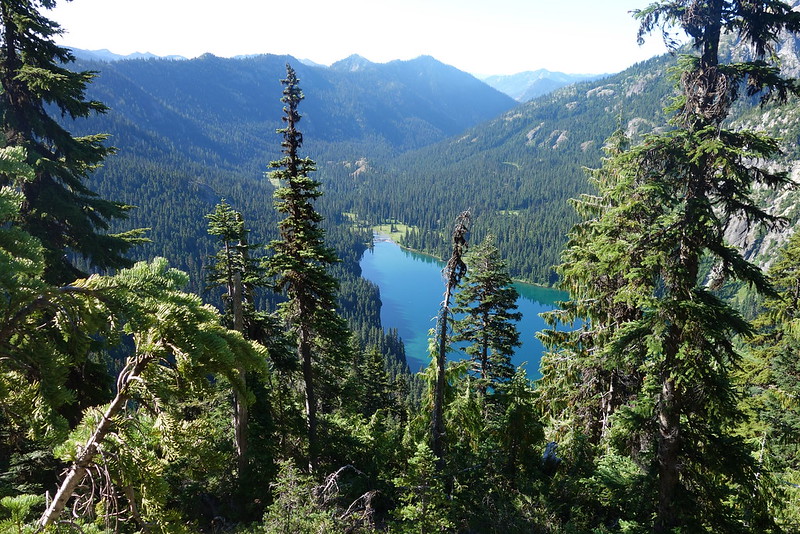 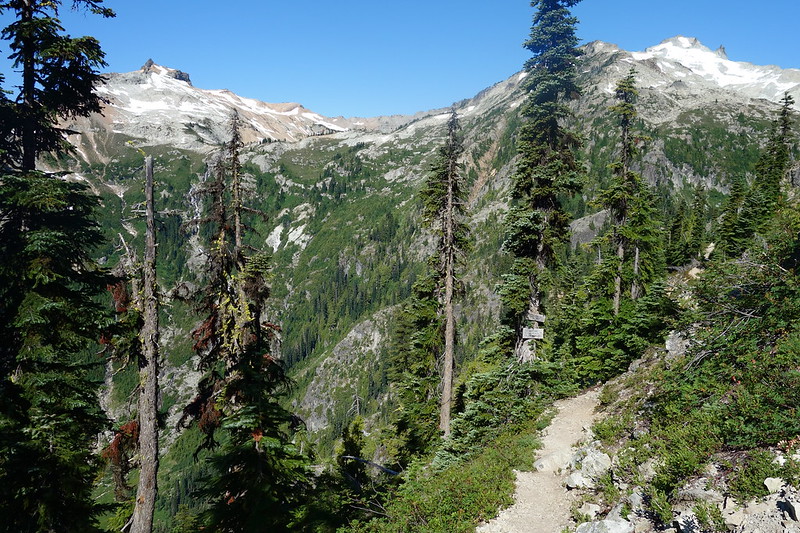 Almost immediately after I rejoined the trail, it crested a small pass just south of Cathedral Rock, and began a long traverse around Hyas Lake, passing a half dozen creeks, which ranged from trickles to torrents. 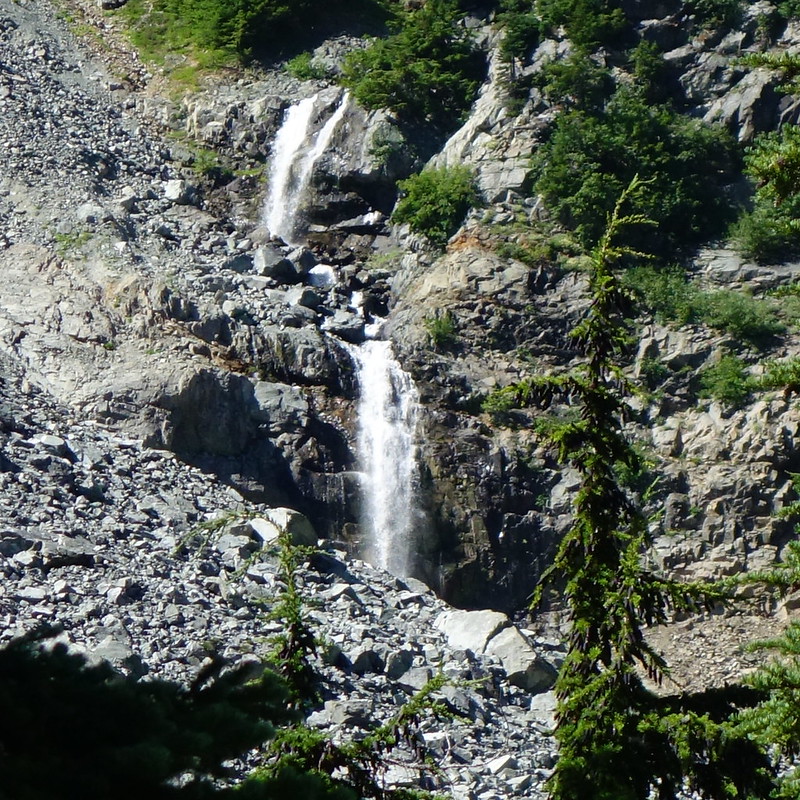 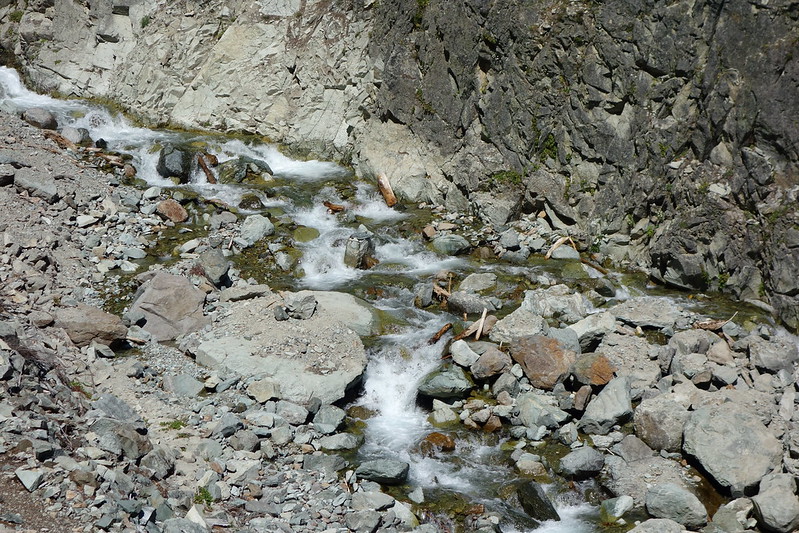 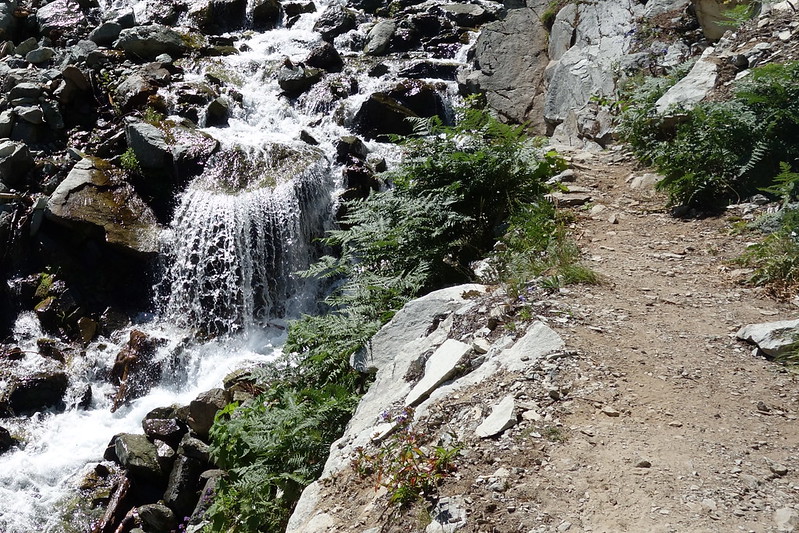 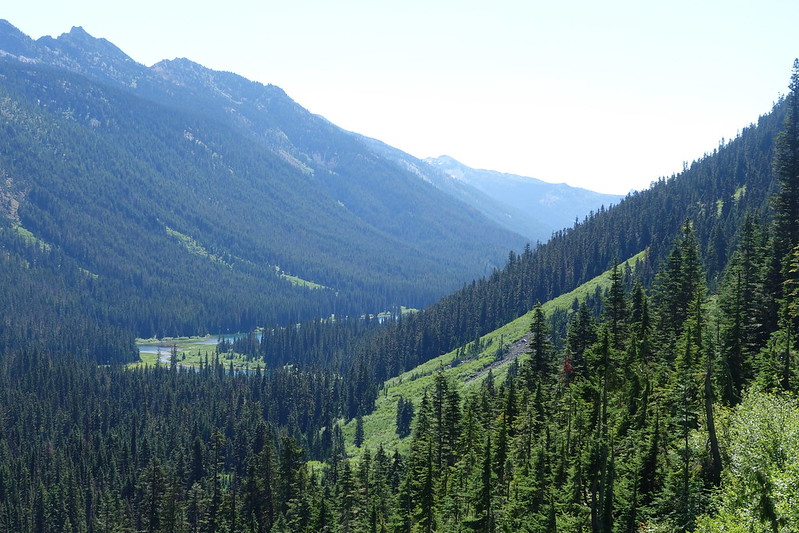 After a few wet, brushy miles, I reached Deception Pass, and the trail immediately improved. I think the pass marks a line between ranger districts? But in any case, the trail suddenly became broad and easy, and I stopped to filter some water and eat a few handfuls of trail mix. 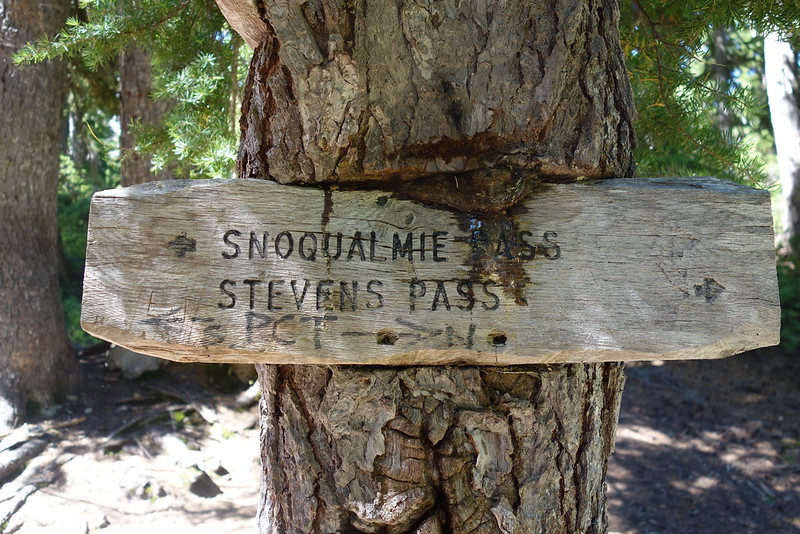 As I sat on a rock in the mostly dry stream bed, a massive noise—like a thousand engines starting at once—came careening over Trico Mountain. Then, an instant later, an army jet passed. It couldn’t have been more than a few hundred feet above the trees, following the Deception Creek drainage down and out of sight.

It felt not so much like an intrusion as a category error—like the color purple showing up for Sunday dinner. The sound stuck around for a while, echoing up and down the canyon. And when it finally faded, the wilderness all seemed swiftly sweeter, and more significant, in the new silence. 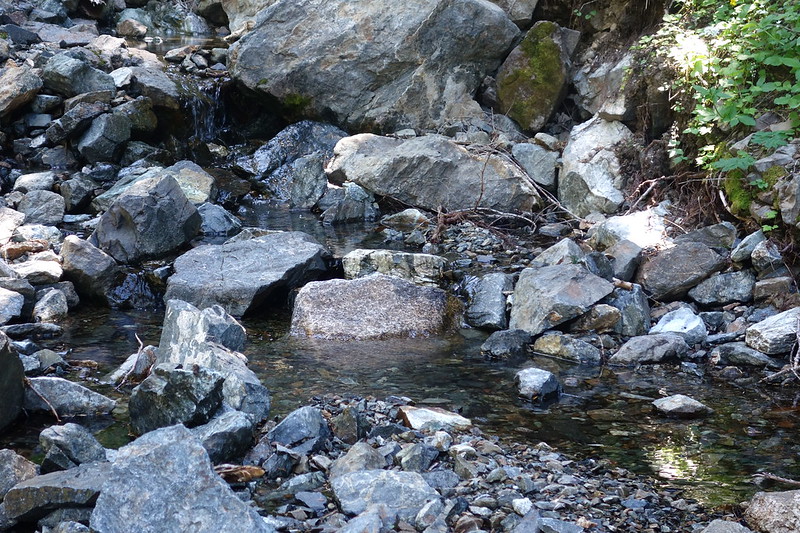 From the pass, the trail followed high above Deception Creek to the Deception Lakes, then around the north side of Surprise Mountain to Glacier and Surprise Lakes. I stopped for lunch at a small outcrop, where I was joined by a dad and his son, both struggling under massive packs, in the middle of a week-long trip from Stevens to Snoqualmie. They were both obviously tired, but in good spirits, and joked with each other about the size of their packs as they stumbled to get them off. It made me think of my dad—of his giant pack and good spirits. 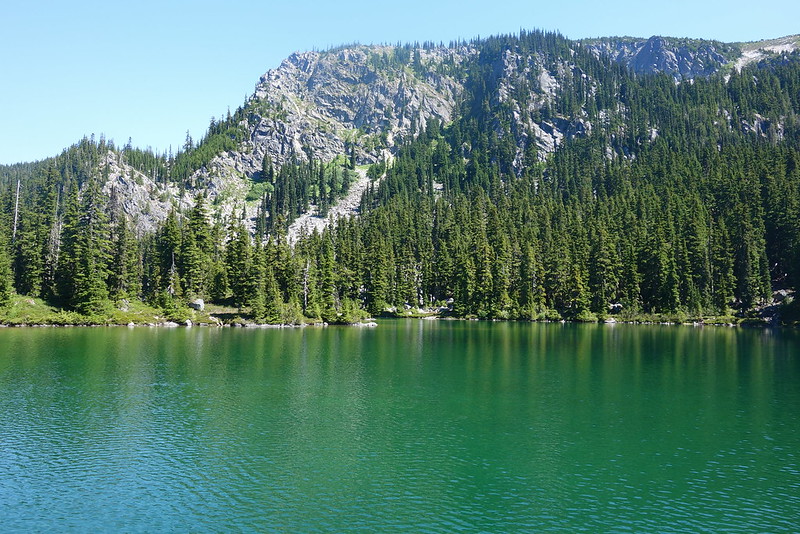 Switchbacking down from Surprise Mountain, I got my first views of Glacier Peak and the North Cascades. I’d never seen Glacier Peak before. It’s huge! It felt weird to be seeing it for the first time, like I’d somehow managed to live in Portland my whole life and never see Mount Hood. 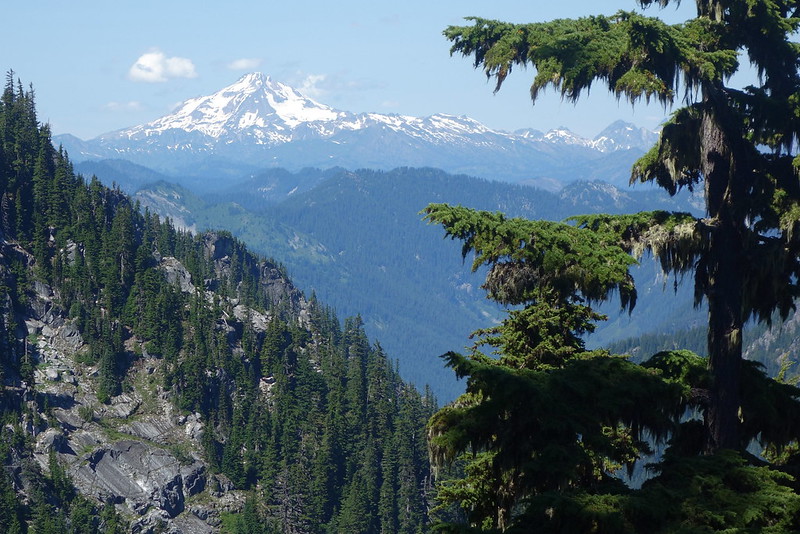 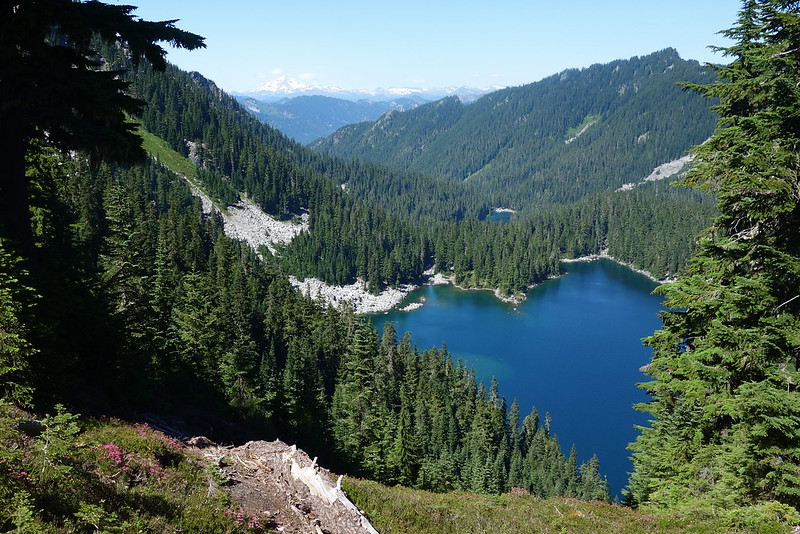 I’d been expecting the second half of today to be mostly about making miles, but it turned out to be unexpectedly beautiful, as the trail passed through heather meadows full of peeping pikas and onto a long, deep green ridge above Trap Lake and Trapper Creek. It cooled off and the shadows grew long and I sped up a little, the way one does when the walking’s easy and thoughts of dinner begin to intrude. 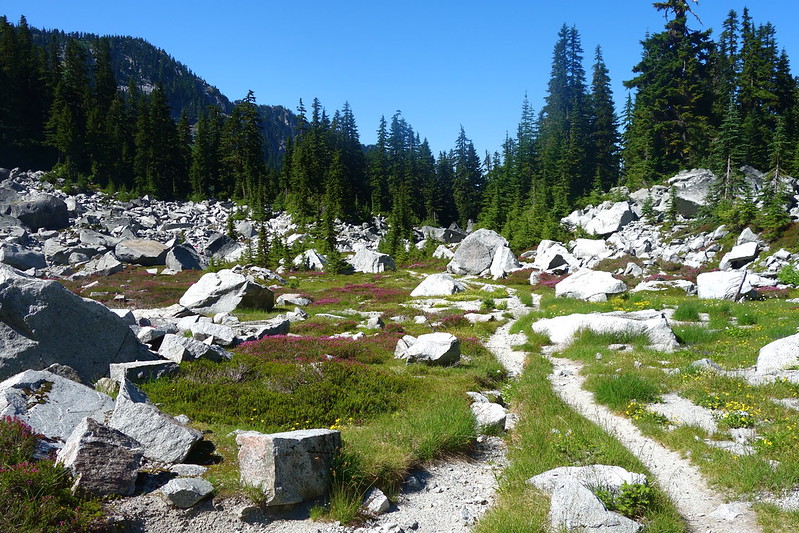 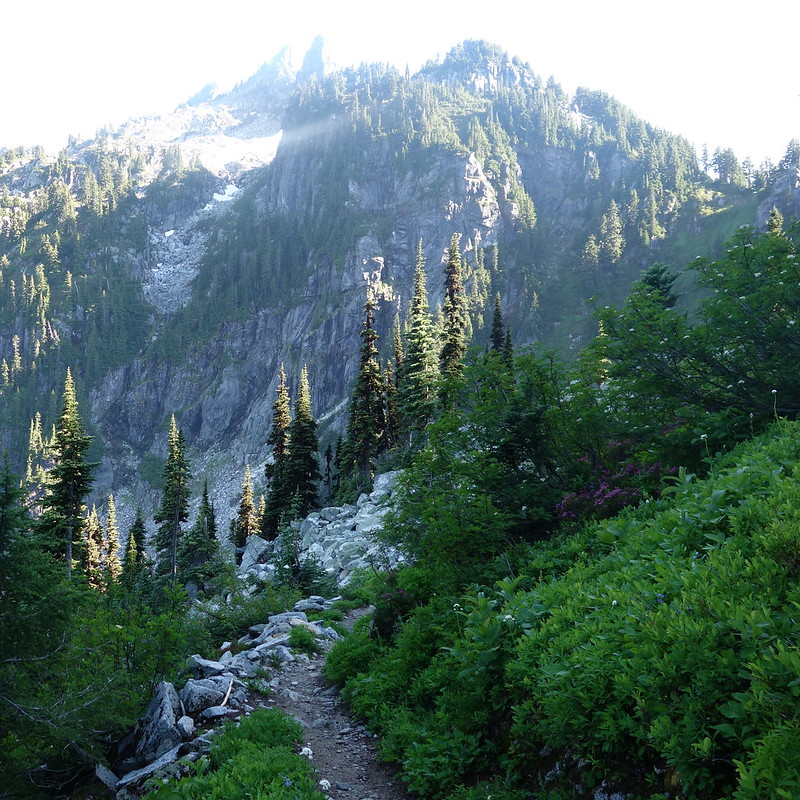 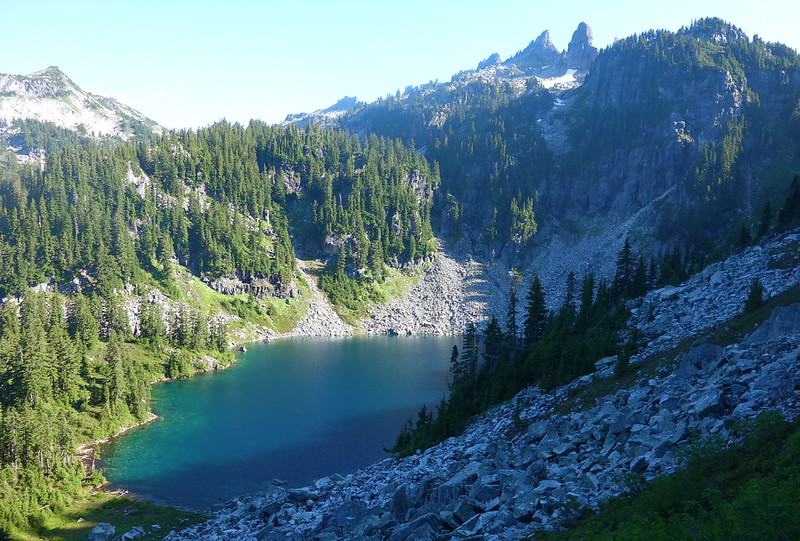 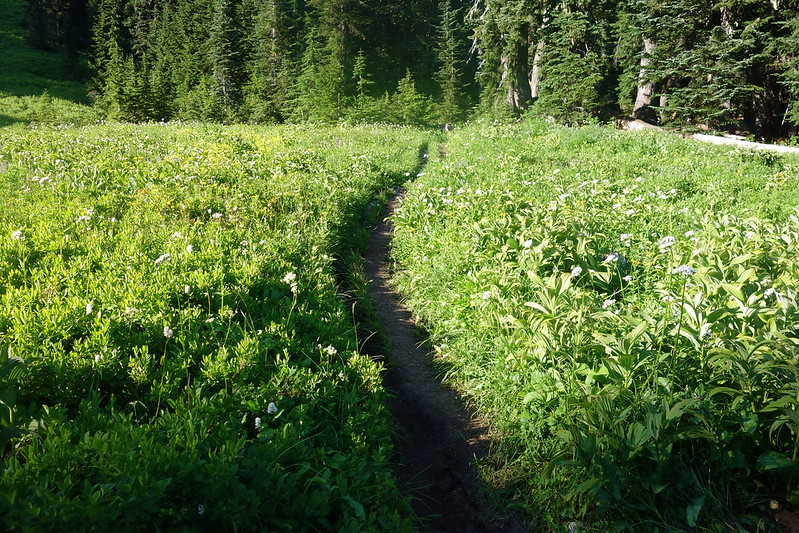 Camp tonight’s a generous site on the south side of Mig Lake, sheltered on three sides by trees, with its own veranda overlooking the lake. I’m alone and the water is warm, so when I got here I took off my clothes and dived in in the fading light, swimming to the other side just as the clouds turned pink.

Sitting on the shore to dry off, I thought again of my brother. If I were in Portland, we’d probably be going to float down the river. Maybe I’d be sitting with him in his garden, watching him tend the tomatoes, playing in the dirt.

It’s funny. People always talk about these sorts of trips as times to find yourself. But I’m not sure that’s right. There’s looking in, to be sure, but there’s really nothing interesting in there. For me, looking in always means looking out: at my brother, Krista, my parents, at all the people who make me who I am, at all the people who are with me now, in the memories I always carry. Maybe finding that is what it means to find myself. 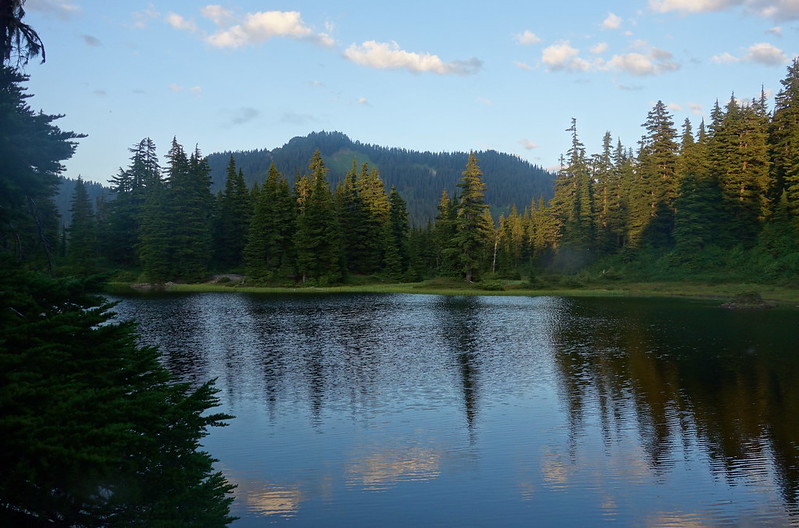 I sat so long on the shore that I started to shiver. The sun was setting and I scampered to bed, just as an unthreatening cloud came over the horizon.

One thought on “WA PCT, Day 16: Looking in and Looking Out”