So here’s the thing: you know that “unthreatening” cloud I mentioned last night? Turns out it was actually kinda threatening. 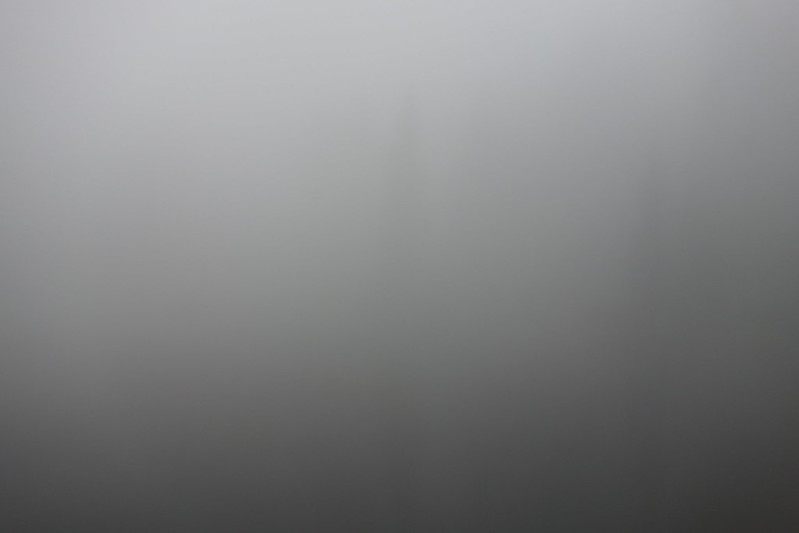 I woke up this morning in a heavy fog. It wasn’t raining, but it wasn’t exactly not raining either, and I packed up quickly, worried that things might break for real.

It broke as soon as I left camp.

From the lake, the trail passed gently up and down across a series of minor ridges to Lake Susan Jane, then left the wilderness for a few miles of powerlines and ski lifts. I made good time as the rain picked up, and thunder began to crack in the distance. 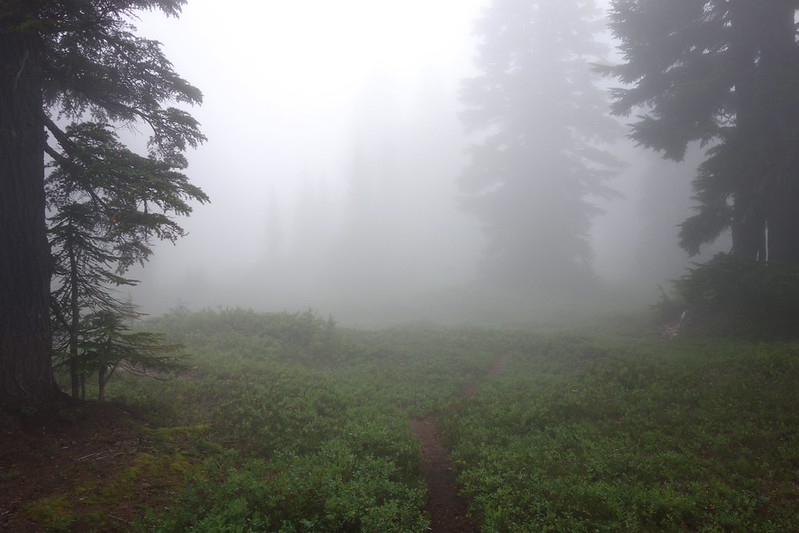 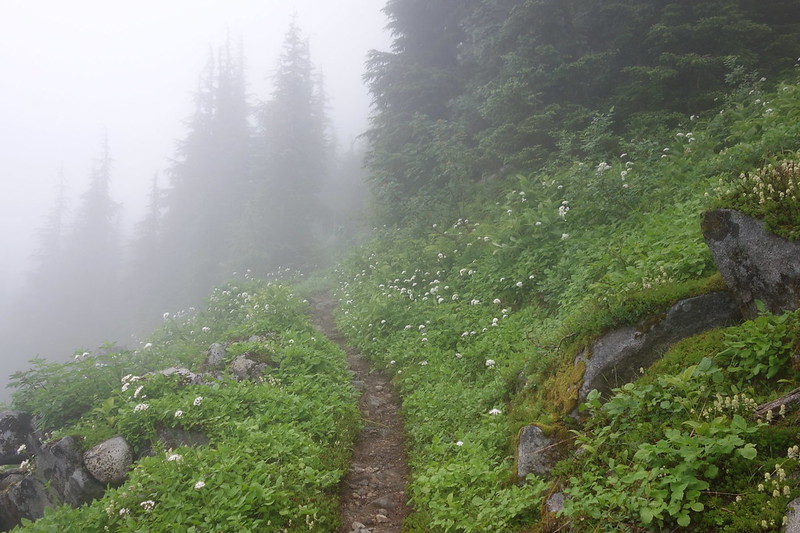 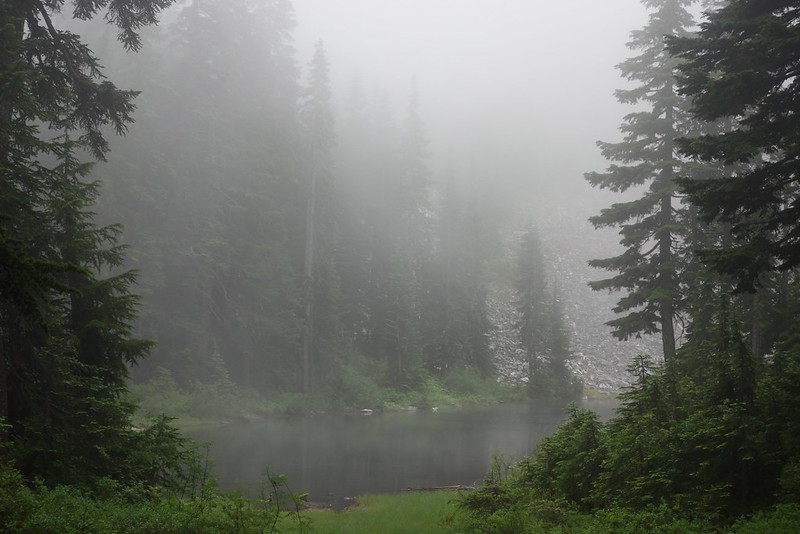 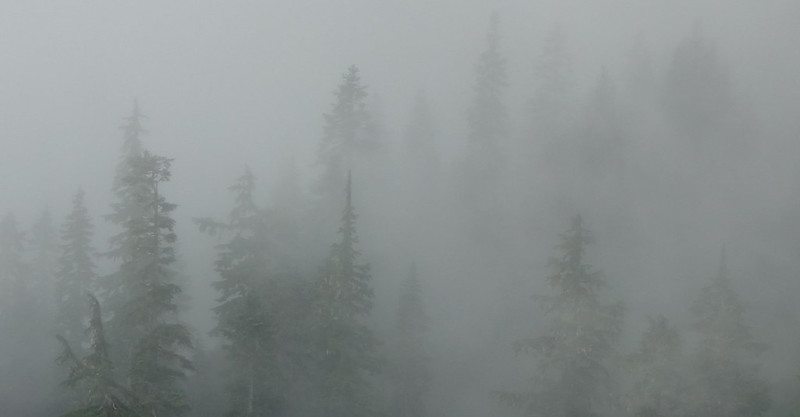 I knew I should have a resupply package waiting at Stevens Pass, but when I got here the place seemed totally deserted, and I wandered around for a while, looking for somebody, anybody, who worked here. I couldn’t find a tap to refill my water, so I used a muddy old garden hose someone had left out, running full blast in the middle of a gravel pit. Eventually, after a nervous half hour, I chased a man down—a pleasant ski bum type from Leavenworth—who helped me get my stuff and directed me to where I am now, an empty, covered dining deck with room to sort through it all.

I feel like I’m sitting in the middle of a massive, deserted Disneyland.

Packing up my next week’s worth of stuff just now, I checked my phone and miraculously had service, so I called Krista to thank her for the package and to tell her how I’ve been and to hear her voice and to… well, you know. It was hard, because I couldn’t talk long, but it’s funny how much a short hello can mean.

For the first few miles from the pass, the trail’s an old road that closely parallels the highway, and as I walked away, I listened as the storm sounds mixed with engines and horns to form a sort of low-level hum, mingled metabolisms from two different worlds.

I stopped at a small, rocky creek—one of many south forks of Nason Creek—for a late breakfast, and to filter a few liters of water. Another front was coming up the valley from Leavenworth, casting a strange grey fog on the struggling trucks.

As the trail turned away from the road, I met a large group of ragged, happy young hikers—all southbounders trying to do the whole thing—planning to hitch into Leavenworth for the night. One was in sandals, seemingly without a pack, eating Go-Gurt that must have been at least a week old. One had two plastic raincoats and an ice axe and what looked suspiciously like a folding camp chair. A girl’s hair seemed to openly defy some pretty basic laws of physics. I loved them all instantly and completely. “You want to just turn around and come to Leavenworth with us?” I paused, to imagine another world. “We’re going to make, I don’t know, macaroni and cheese or something.” I apologized—“I really am sorry, in several senses”—but I had miles to make. As I was leaving, the girl yelled after me. “Hey, do you want an ice axe?” I asked, a little concerned, if there’d been steep snow. “No, but, like, it’s good for cutting salami and shit.” Then the boy with two coats called, though he didn’t look back: “You’re going to see some shit!” I spun around and answered. “You too man!”

The rain got a second wind as I wound through the switchbacks below Lake Valhalla, and by the time I made it to the lake proper, it was pouring, driving down and spilling from my rain coat visor as if it were a clogged gutter in spring. 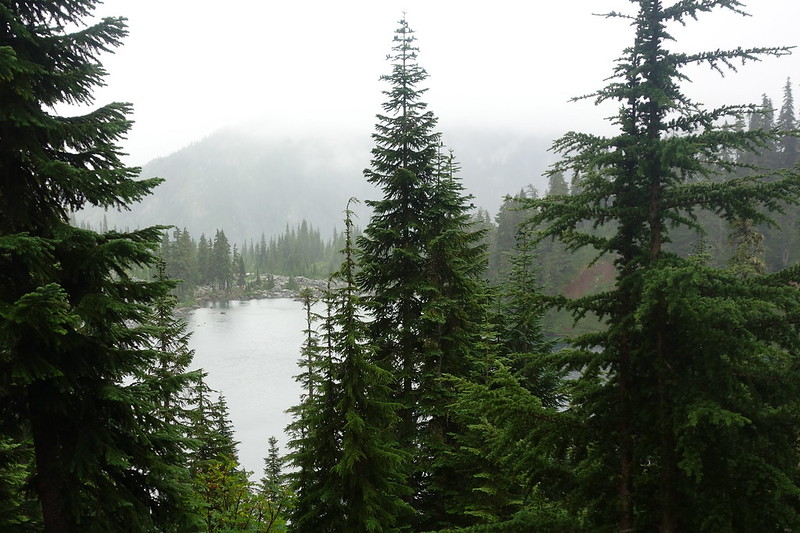 Things got still thicker as I approached Union Gap, but as I passed over the ridge I could see tiny pockets of sun far north, and hoped, in that way you hope for things you don’t expect, that maybe it would clear. It didn’t, but soon at least I was back in the woods, steeply side-hilling on overgrown trail below Union Peak and across a few forks of the Rapid River. 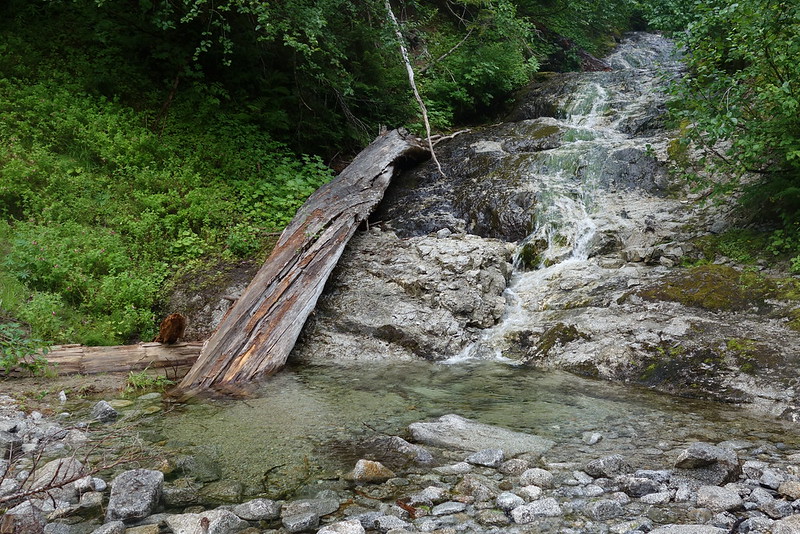 Then it was just a short hop to Lake Janus, where I found a small, over-loved, but mercifully sheltered camp, and quickly put up my tent, took a few liters of water for the night, and cursorily crammed in my camp chores between bursts of rain.

Just as I was finishing dinner, a kindly older man, who looked distinctly like Gandalf, ambled over from an unseen camp. “Hello, there!” I said howdy in my cheeriest voice. (I have a theory that one should always try to sound cheery in inverse proportion to the cheeriness of the weather.) “We didn’t realize we had a neighbor!” I apologized if I’d ruined their privacy. “No, uh…” He trailed off and I took the opportunity to put up my dinner things. Then a grand old English woman—his wife, it turns out—ambled out from the bushes to a nearby tree, looking cross with him but very happy to see me. “What’s taking so long?” she asked to no one in particular. Gandalf turned red. “Oh, uh,” there was a befuddled pause. “Would you like to come visit at our camp for a spell? We’ve got a tarp set up and everything…” A spell! I told him that I would love to, and meant it.

Their camp was wonderful—a tarp for shelter, a log for sitting, even a place to put my drink—and we spent a happy couple hours chatting. They’ve been on the trail for a while, since Crater Lake, doing short days and making comfortable homes each night. Gandalf asked what I did “out there.” I told him I’d just finished a PhD in political science, and he laughed. “Politics!” He stared into the gathering dark with kindly incredulity. “Speaking of politics, you know, we’re really just doing this whole hike as a way of emigrating to Canada.” I smiled, and meant it. “Even when it’s rain for weeks, the news here is always better than the news out there.”

Eventually it was too cold and dark to continue without shivering, so I thanked them for their hospitality and said my goodbyes. “You know, maybe I’ll look you up when we all get to Canada.”

And I meant it. Almost.