From the lake, the trail descended a short way through bursting meadows toward the headwaters of the Little Wenatchee, then climbed up a steep several hundred feet to Wards Pass and Dishpan Gap. 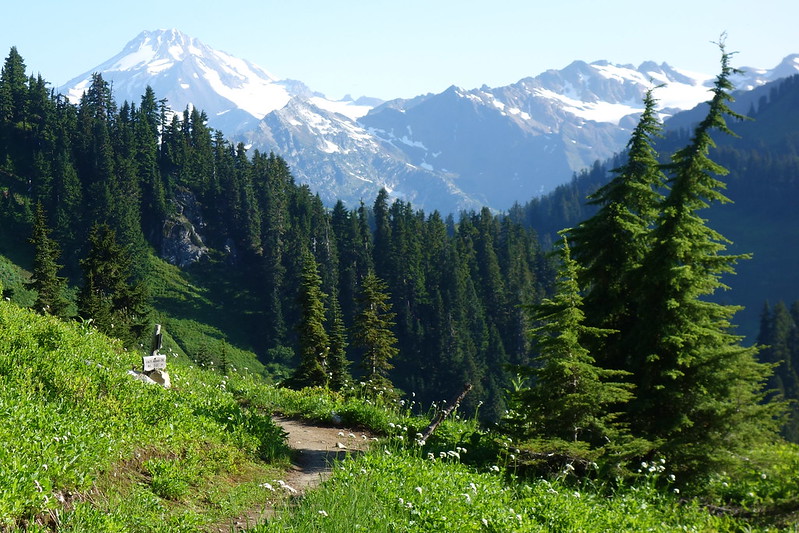 As I climbed, I looked back at the rocky spires of the Alpine Lakes—the last time I’ll see them this trip—and said a silent thank you. I have this memory—I think it’s a memory, though it’s so far back that it’s coiled and clouded into something more like a dream—of being a kid, hiking out of Green Lakes with my dad, and hearing him thank the mountains. There was nothing precious or affected about it. More than anything, it sounded like the sort of thing Humphrey Bogard would have said in some 40s film to a plucky dame. “Goodbye mountain, and thanks!” And so I looked back now, and tried to say goodbye in my dad’s voice.

I stopped for breakfast at Dishpan Gap, where the bugs were better and there was even a minor campsite, then meandered down to Meander Meadow, up across the eastern shoulder of Kodak Peak, and north through beautiful hanging meadows into Glacier Peak proper. As the trail descended to Indian Pass, through deep, soft green friends spotted with bright red paintbrush and spiny sharp heather, everything seemed just sort of right. I put on an old Band of Horses album and skipped through the fields, singing along. 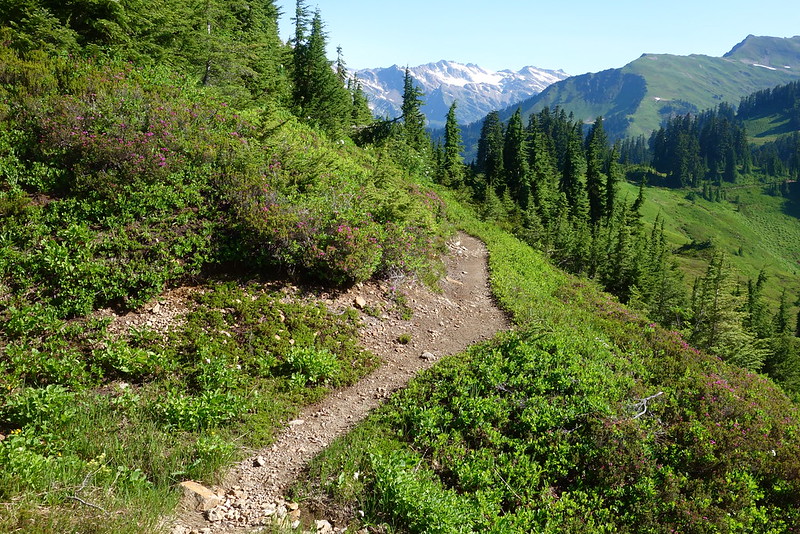 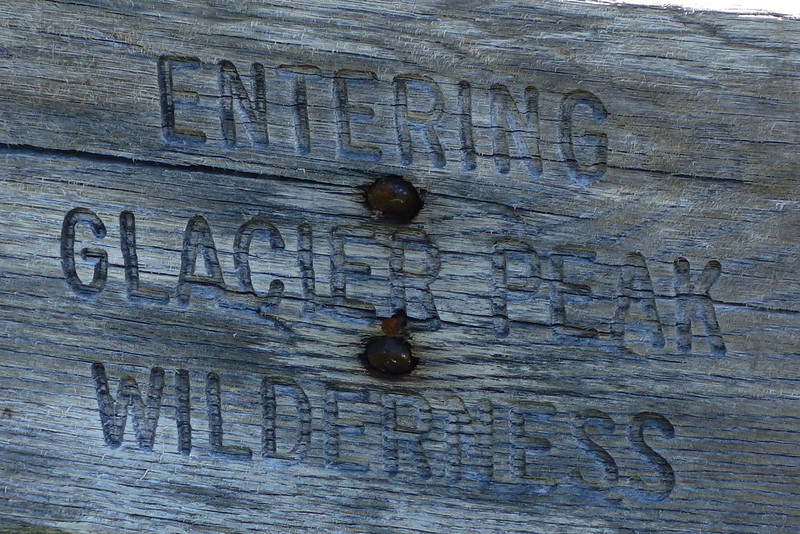 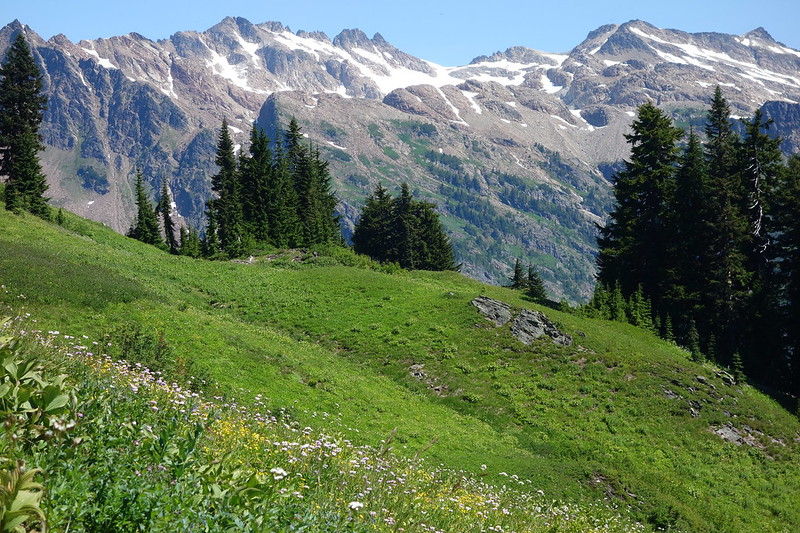 From Indian Pass, I followed the trail up, through a deep basin thick with the smell of warm, wet flowers—like perfume, and so strong as to be almost too much—then through a little snow and a lot of lupine to White Pass.

The meadows are just so beautiful here. I sat down just short of the pass, on a wooden step in the middle of the trail, and teared up. I don’t know why. These endless numbered days, which stretch to the horizon but melt into moments and collapse into single, shining images as I stare at my camera’s glowing screen at night: they’ll all be over before I know it. These impossibly dear ridges and valleys, the miles of blooming, buzzing meadows. The torrents and trickles, the rushing falls and glassy ponds. The rolling hills where I disappear, and which disappear, in turn, into memory. It’ll all be over before I know it. 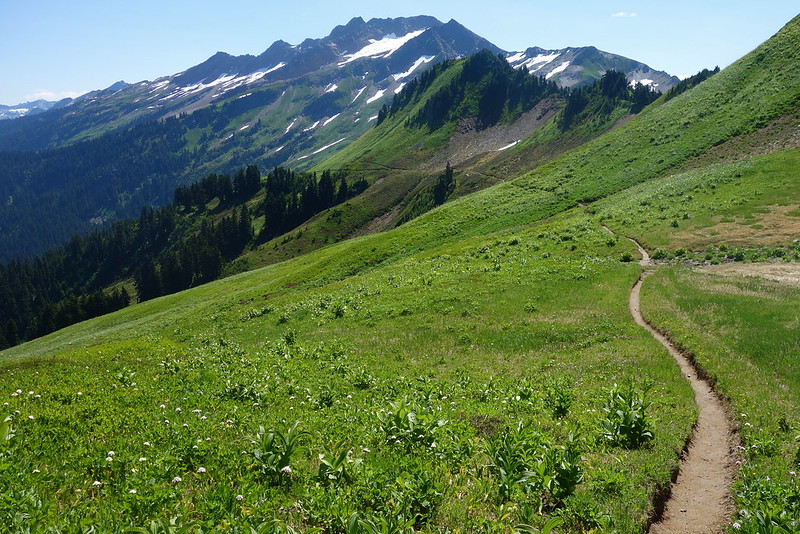 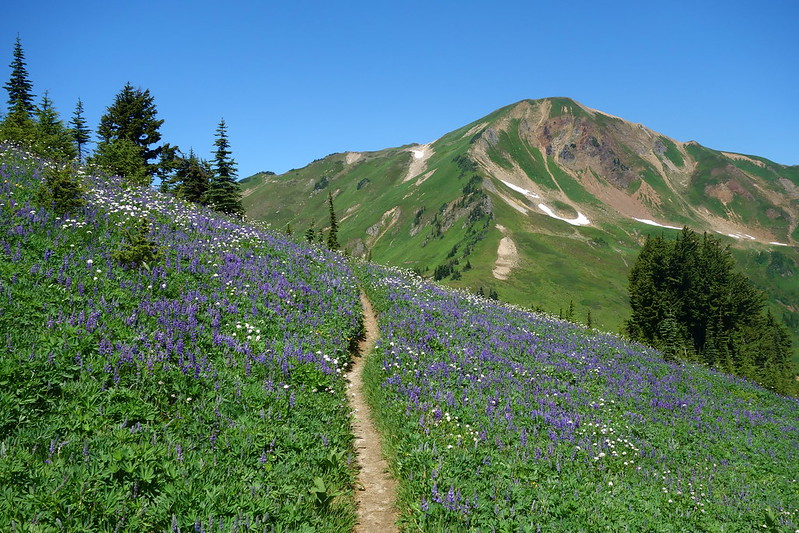 After the pass, I followed high above the Sauk River for a while, through steep meadows past a half dozen thin, fast waterfalls. Then to Red Pass, and down into a deep, perfect valley—the headwaters of the White Chuck River. 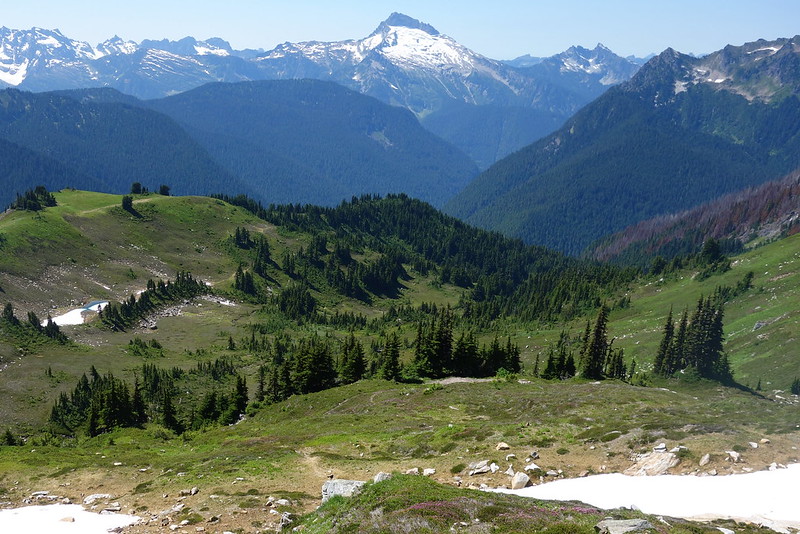 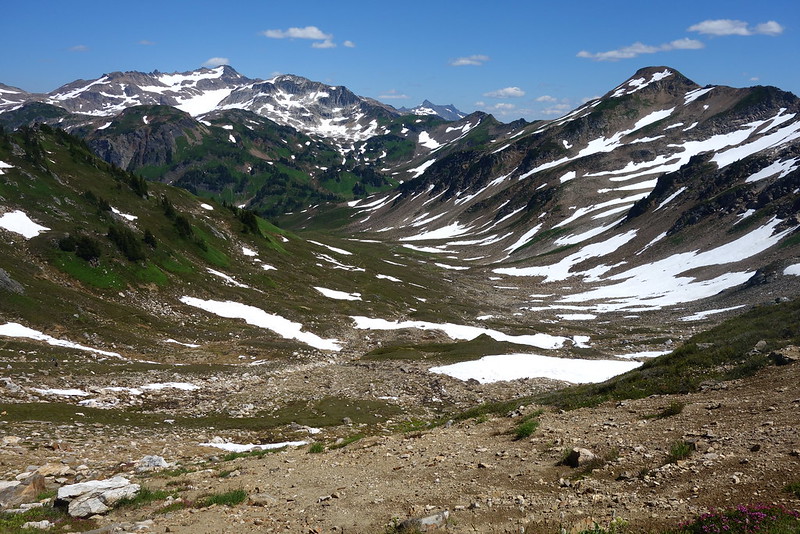 In the valley, the snow was just melting. There were thin snow bridges across some of the streams, and matted heather among the bright white rocks. And there were flies. Thousands and thousands of them, swarming every time I stopped, flying between my eyes and glasses. 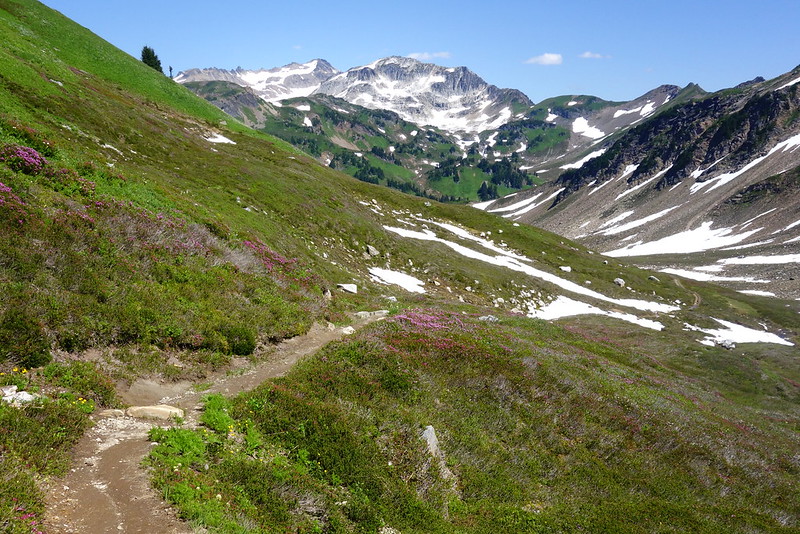 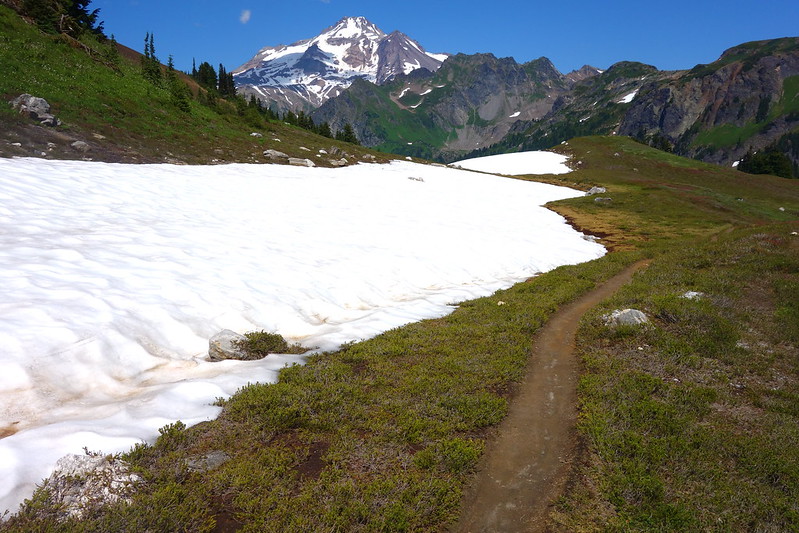 I guess this is the price one pays for Glacier Peak. The mountain’s too steep and glaciated for a flat trail, like the one that circles Mount Adams. Instead, the trail rises and falls through several deep valleys on its way around the southwest side—like the Sandy crossing on Timberline, over and over. 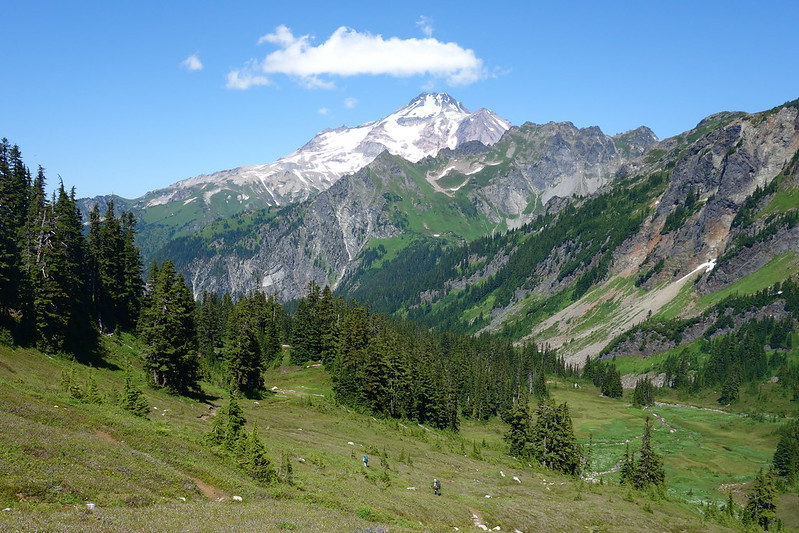 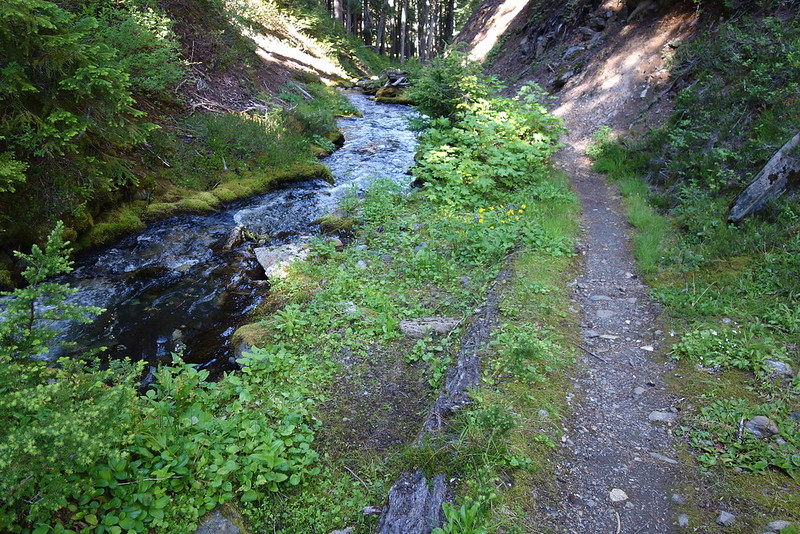 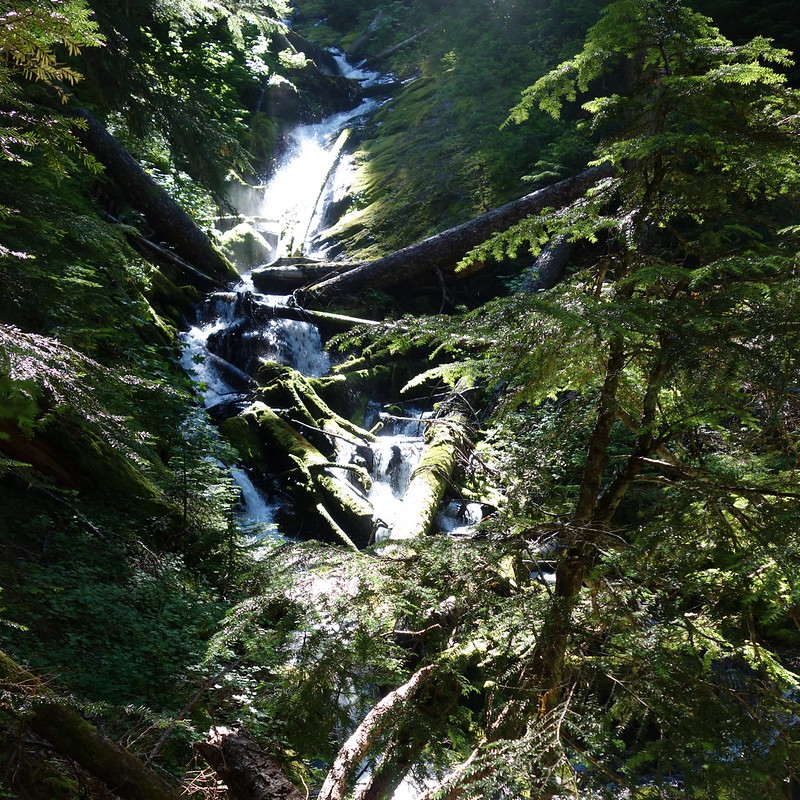 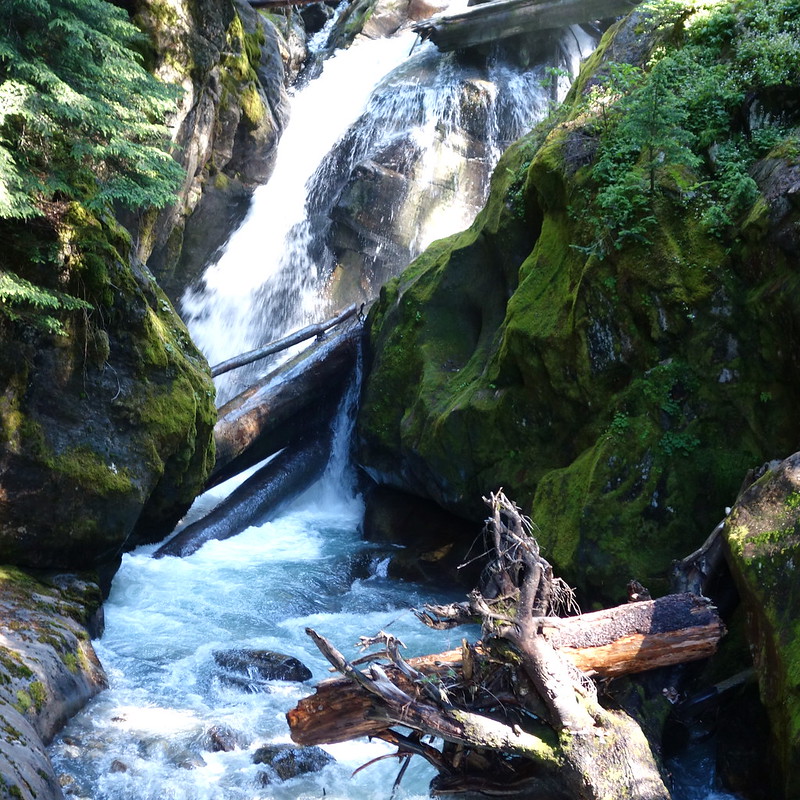 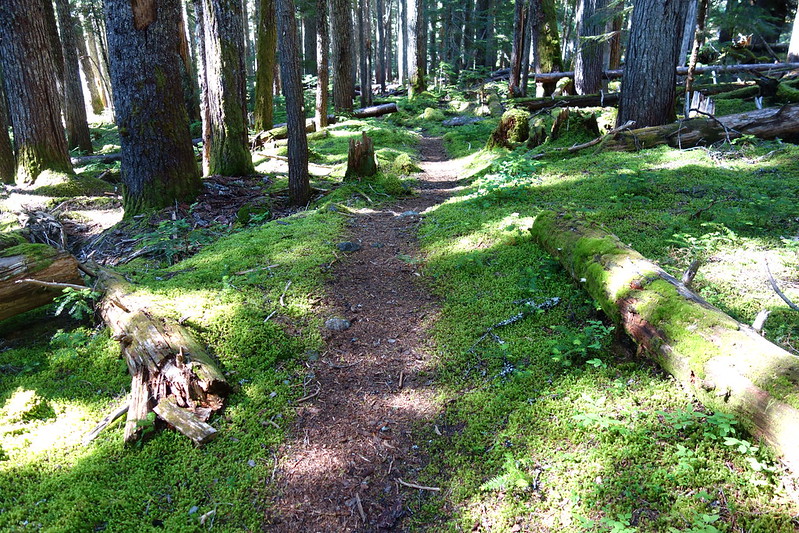 I’d been vaguely planning to camp at Sitkum Creek, but it was still early when I got there, and so I kept going, across Kennedy Creek’s famously broken bridge and up Kennedy Ridge’s steep spine a thousand feet to Glacier Creek and a deep, dripping valley filled with flowers and mossy rocks. 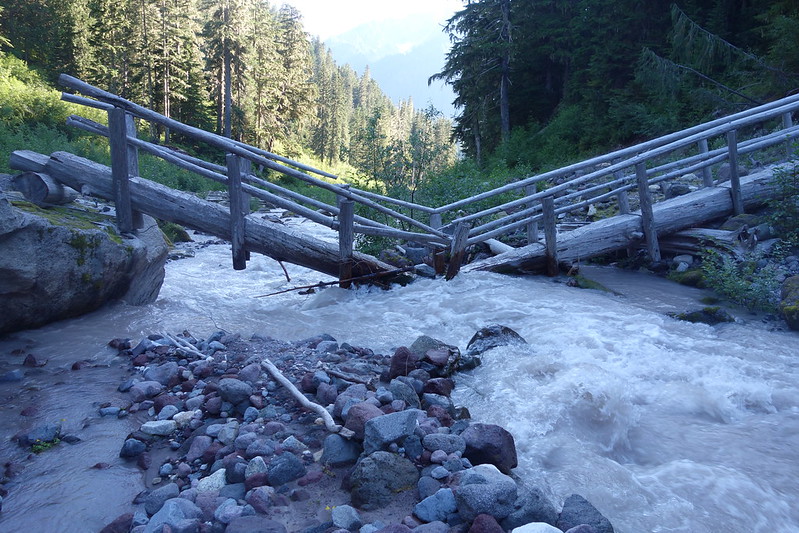 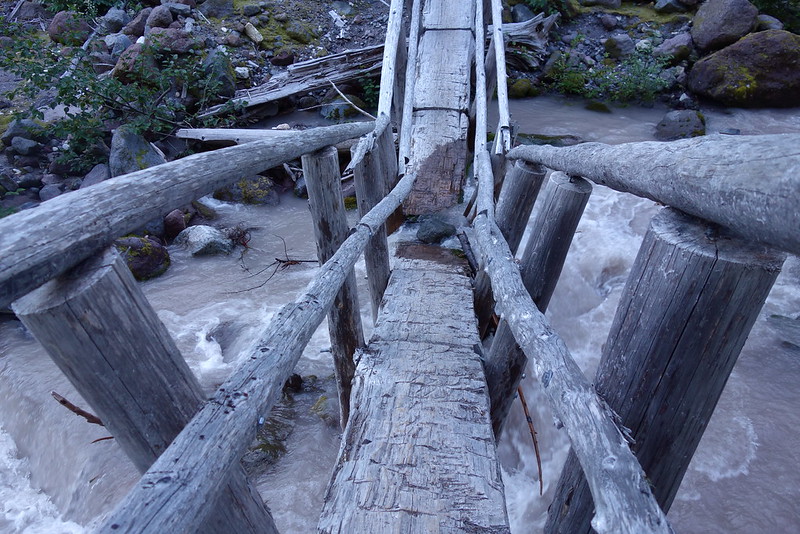 I made camp with an hour of daylight still to spare, so I washed my clothes in the creek, washed off a little myself, and watched the sun fade in the hills above my valley.

The night’s been cold but clear, and I’m sleeping without a rainfly, staring at the stars. Krista’s supposed to be out tonight too, up near Arrowhead Lake in the Sisters, and in her nightly letter—she’s written me a letter for every night—she talked about planning to stare at the stars, imagining me under the same sky. So I’m staying up late, looking up and thinking of her.