Here’s the thing about sleeping in a deep, dark, dripping valley: there’ll be condensation. Like, lots of it. So I woke up early this morning soaked, and put my stuff up to dry. The sun was slow to come, crawling its way up my creek as dew dripped from thousands of frosty, stirring flowers. But eventually it came, and it felt like the world was waking up.

I stayed in camp until late morning, waiting in vain for stuff to dry. Then it was up on increasingly beautiful and decreasingly clear trail to Glacier Ridge, into Pumice Creek’s steep, gouged out gorge, and finally up toward Fire Creek Pass. 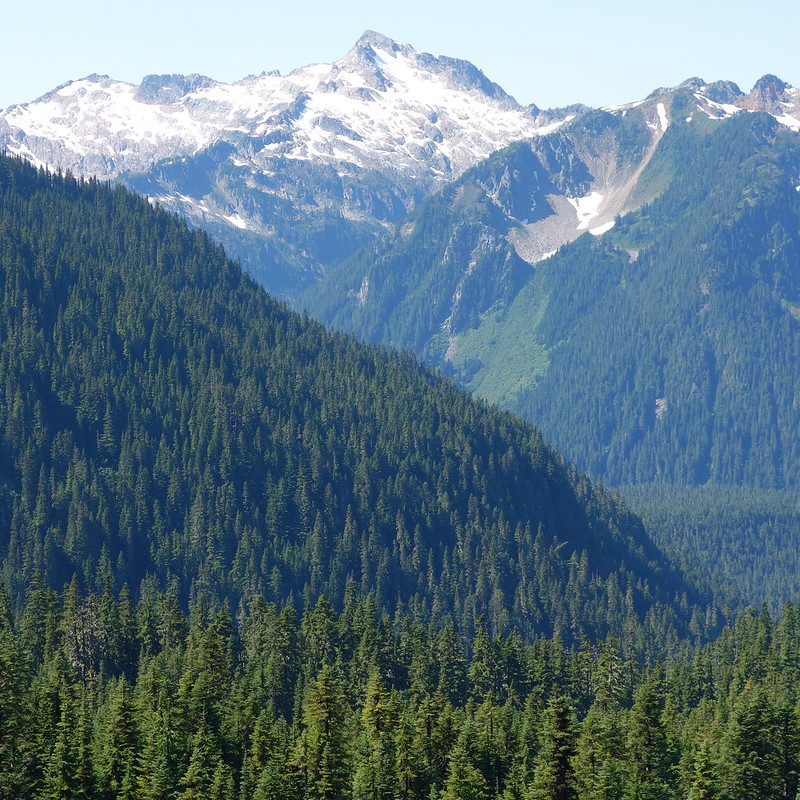 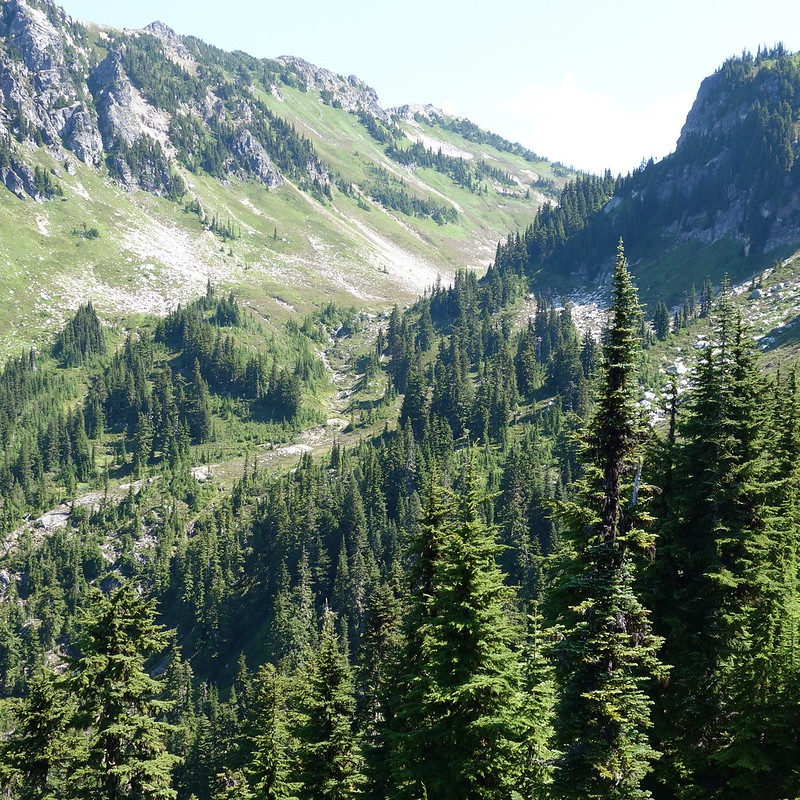 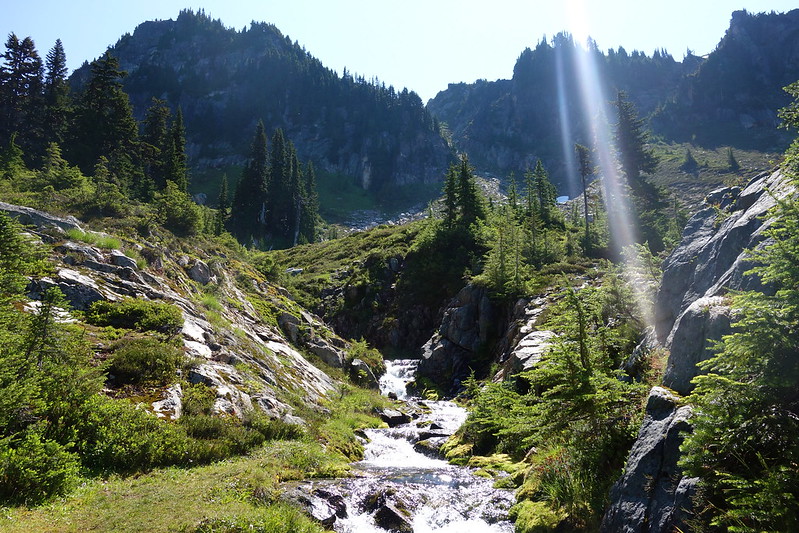 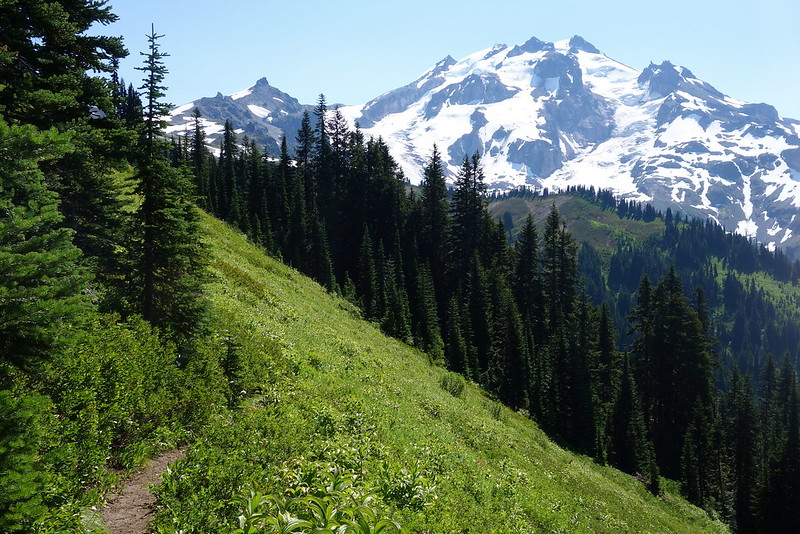 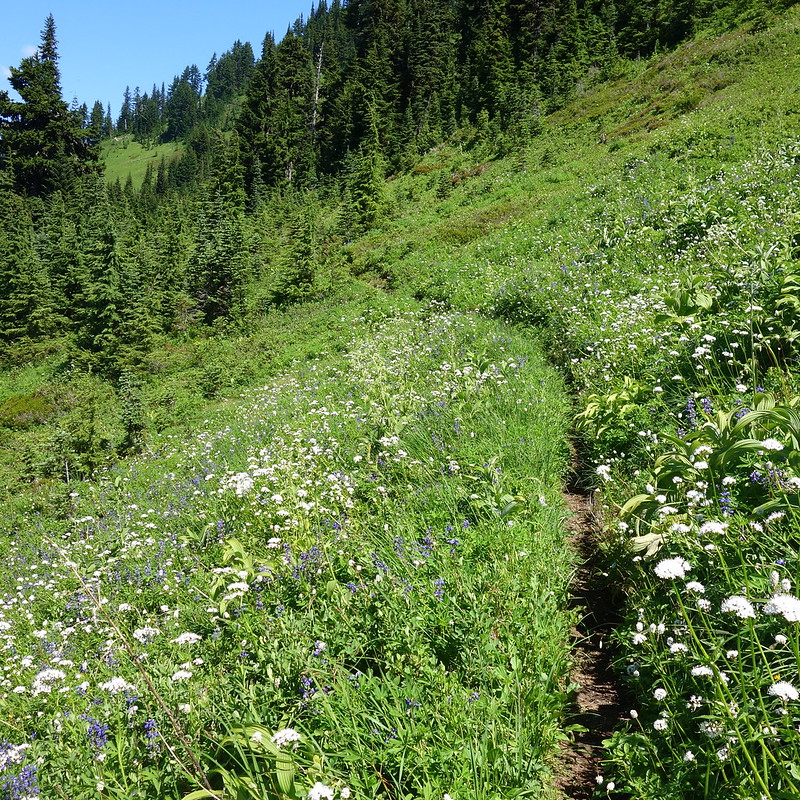 I lost the tread a few times, stumbling over blown down trees and thickets of flowers. Shimmying over a few steep fallen logs required considerably more faith than I’m used to spending. I missed a switchback and ended up on a deer trail in the middle of a steep hanging meadow.

But eventually I made it up here, to Fire Creek Pass, and got my first views into the North Cascades: rows and rows of sharp, spiny peaks stretching beyond the horizon. 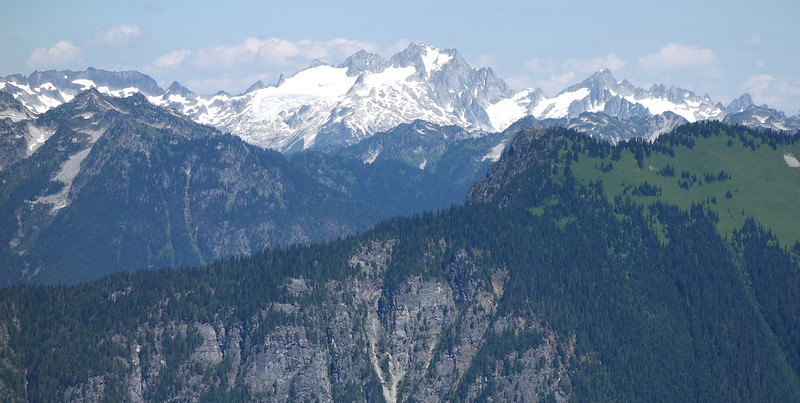 From the pass, the trail descended several thousand feet, past Mica Lake down to Milk Creek, then immediately climbed back up a few thousand feet, on steep, eroded switchbacks. 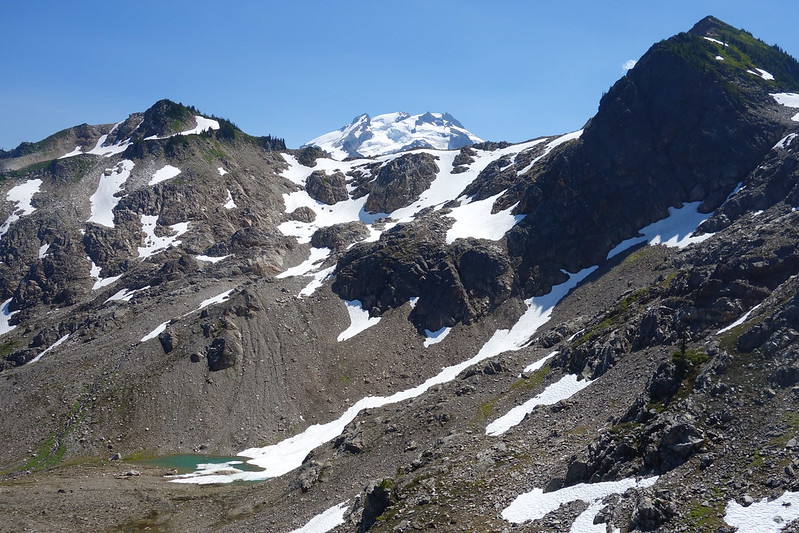 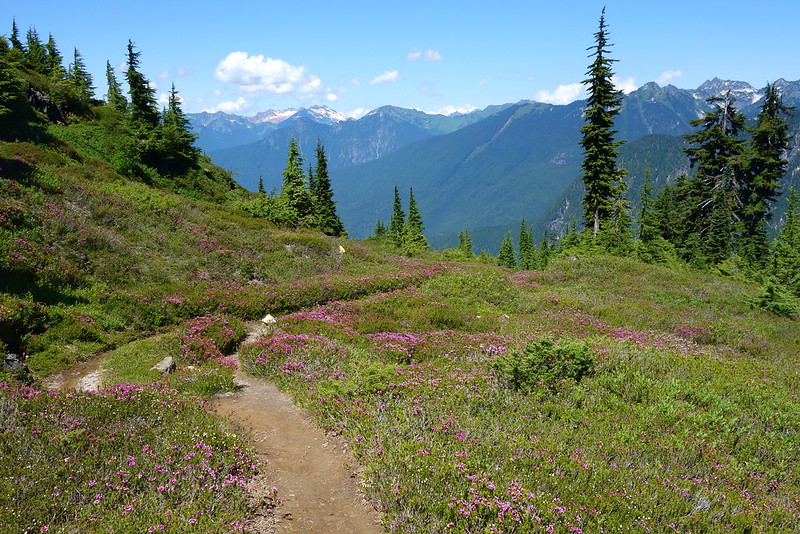 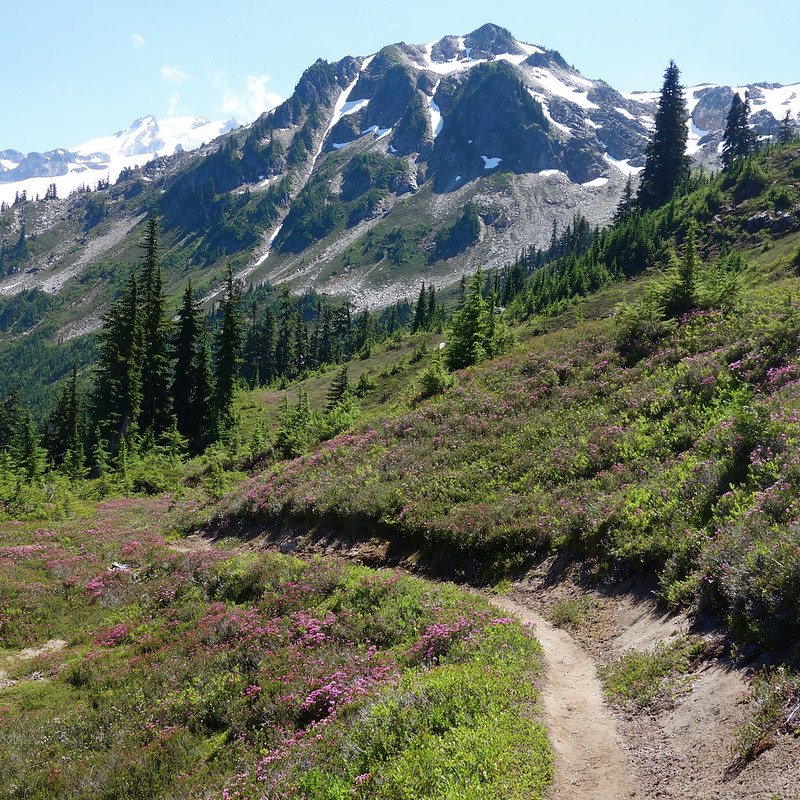 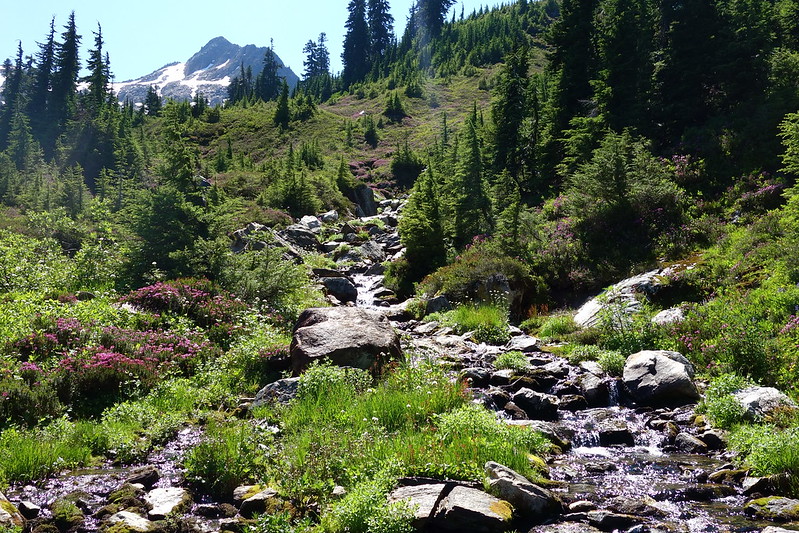 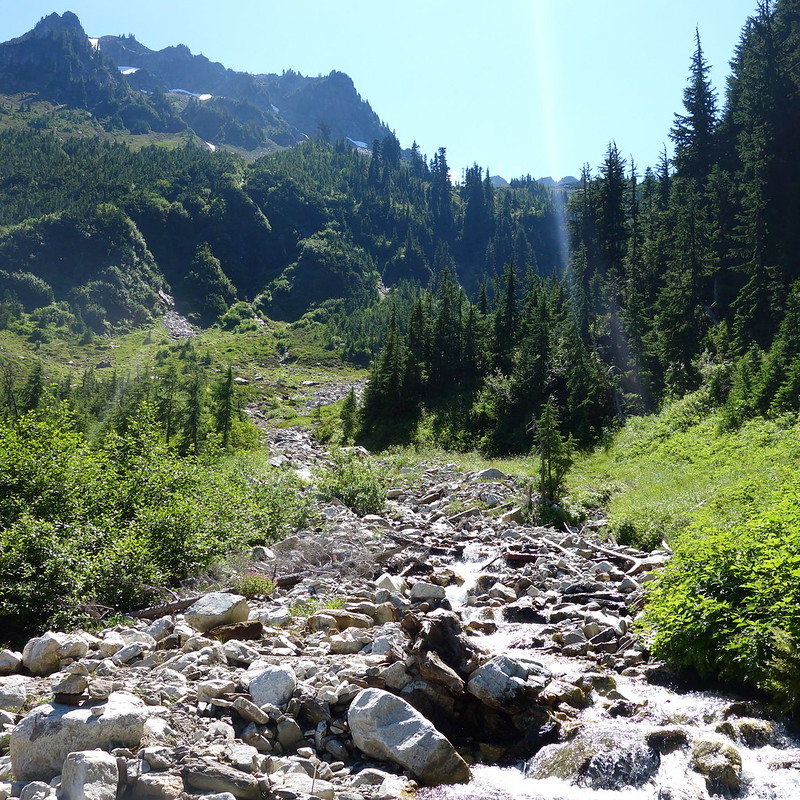 The way down was funny: sections of perfect, well-graded trail interspersed with apocalyptic washouts and avalanche shoots. A few times the path just straight up disappeared, only to reappear twenty feet later and thirty feet down. It wasn’t always clear what was PCT and what was old creek bed, and I’m reasonably sure that I got it wrong at least half the time.

But I got down eventually all the same, to Milk Creek, where views opened up into a wide glacial valley dominated by the Milk Creek Glacier, which loomed over a low pass, and constantly creaked with the sound of falling snow and ice.

Getting down to Milk Creek proper for water turned out to be something of an ordeal. There was really only one way: a steep, rocky scramble twenty feet down off a trailside ledge. I fell halfway down. Nothing bad—just a scraped-up knee, a raspberry on my thigh, and some bruised pride—but it still left me a little shaken, and I spent a while afterward sitting on the bridge, eating trail mix, and trying to regain my composure.

At some point, Heather showed up, exhausted, with a few new friends in tow. She sat down heavily beside me as the rest went to fetch water. She sighed. “Man…”

She pulled up her knees and rested her forehead on them. “It’s like… it’s like I read all these books—Wild, you know, whatever—and, it’s like… even the hard parts were beautiful. But now I’m out here and the hard parts are just fucking hard and that’s it.”

I didn’t know what to say, and so looked down at the rushing water, then started unsteadily. “I guess the thing is that sometimes things are only beautiful in retrospect. Like, maybe when we read that stuff, we’re always being shown these things in the light of a sort of love you can only feel after the fact. Like, I don’t know, maybe when we look back on this, we’ll feel the same way. But not before then.” There was a long pause. “I don’t know, does that make any sense?”

“I don’t know.” She looked down. “Maybe?” Another pause, while the water rushed underneath, and the glacier creaked an ancient creak. “Maybe you’re right. Maybe I came out here thinking I could borrow someone else’s love, but that’s not how it works. No one can do my loving for me.” Then, almost to herself: “It’s not that easy.” I felt myself smiling as she went on. “It’s crazy how doing what you love takes so much god damn work. That’s the shit no one tells you.”

There was another creak from the shining valley above, and for some reason we both looked up and started to laugh. 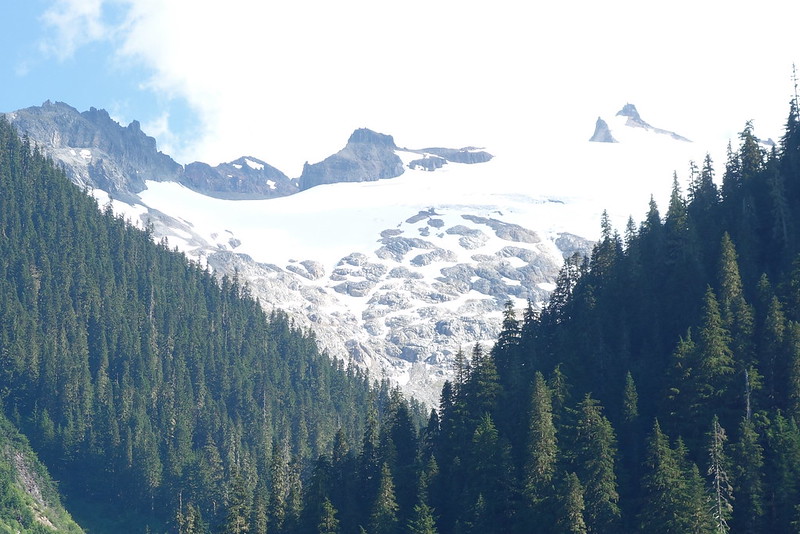 The trail climbing out from Milk Creek was worse than the one coming in. It somehow managed to be both overgrown and eroded, sometimes persisting on nothing but steep, exposed roots under several feet of foliage. 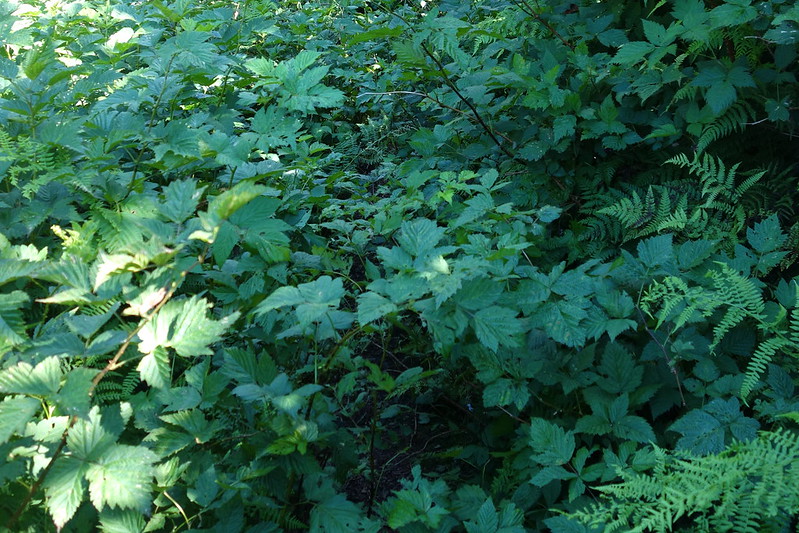 Maybe halfway up, I passed a group of three middle-aged guys, slouched down at a switchback, breathing hard, resting. I asked how it was going. “Shit, man.” He stopped for a gulp of water. “I mean, shit man, but I’m doing it, right?”

After what seemed like hours, I finally crested a ridge, the trail flattened, and I entered an endless parkland of wildflowers and gently sloping hills, leading to the East Fork of Milk Creek. The sort of stuff that’s easy to love. 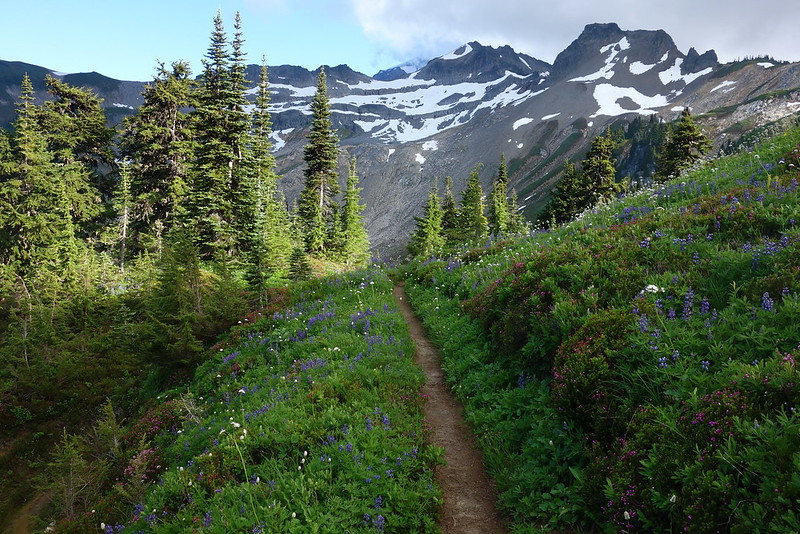 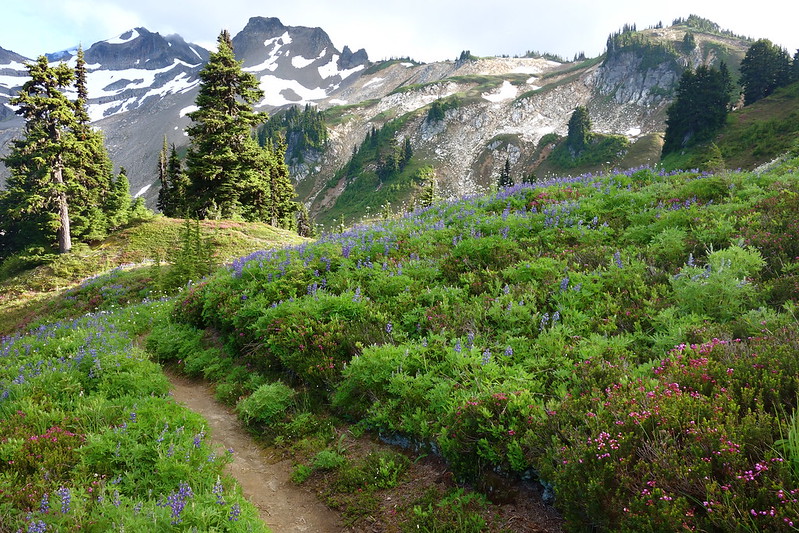 As I entered the East Fork’s massive valley, storms started to grow on the distant peaks, then on the glaciers and vistas just above, so I scrambled for my rain coat and pack cover, and decided to eat an early dinner at the creek, just in case the weather got bad enough to force me into my tent. 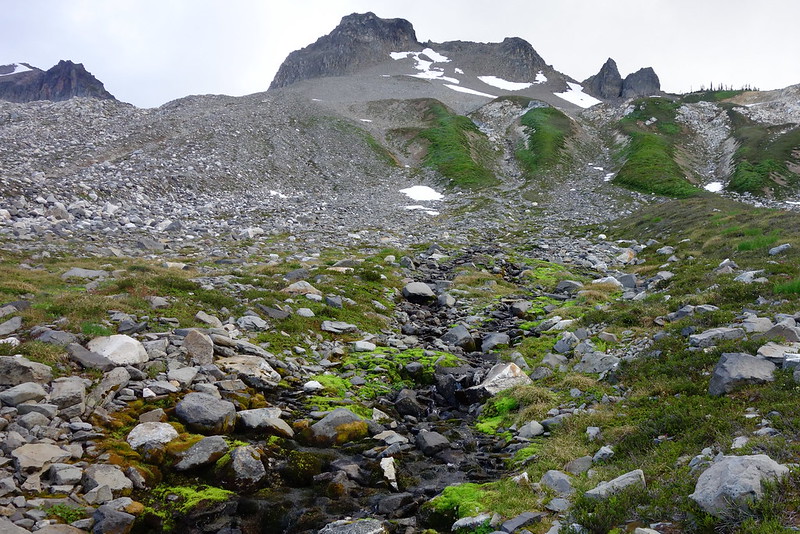 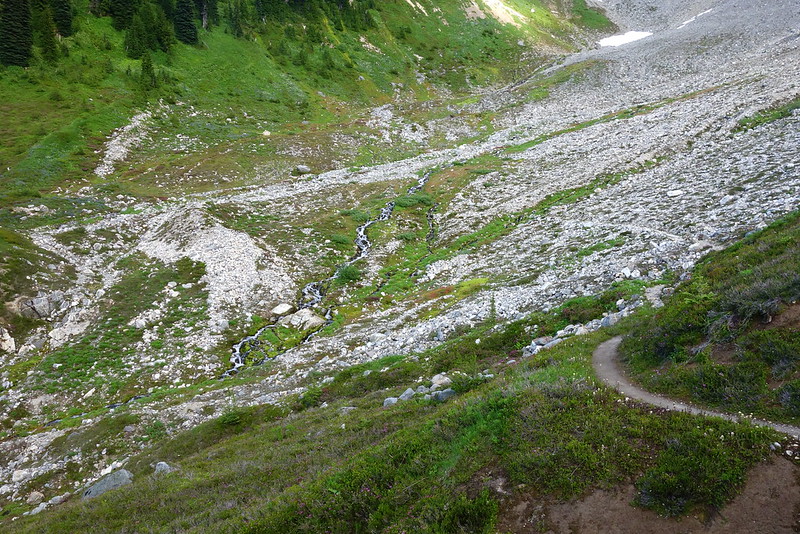 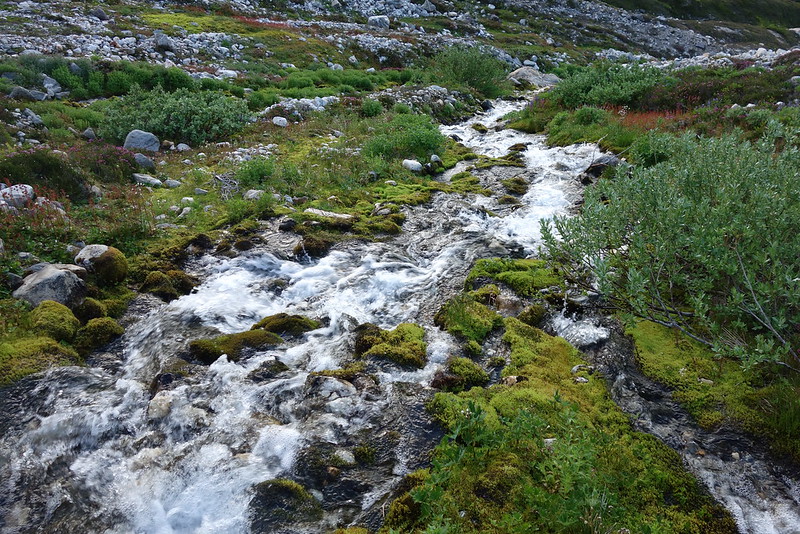 Storms raged all around—I could see rain pounding Grassy Point and Vista Ridge, and hear thunder somewhere south—but my little valley stayed miraculously dry, and I sat on a small ledge above the stream, eating mashed potatoes to the sound of warm summer wind.

After a small climb out of the valley, it was another series of meadows, this one full of whistling marmots, standing at attention among a blooming, buzzing confusion of flowers. 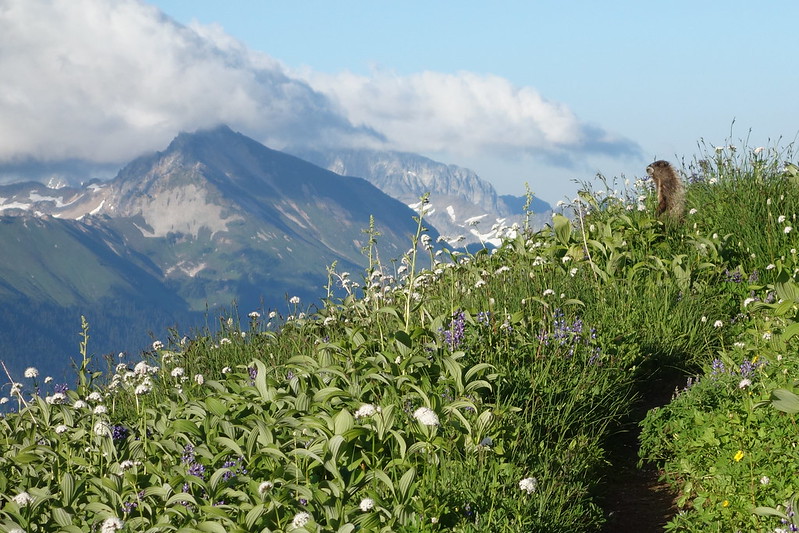 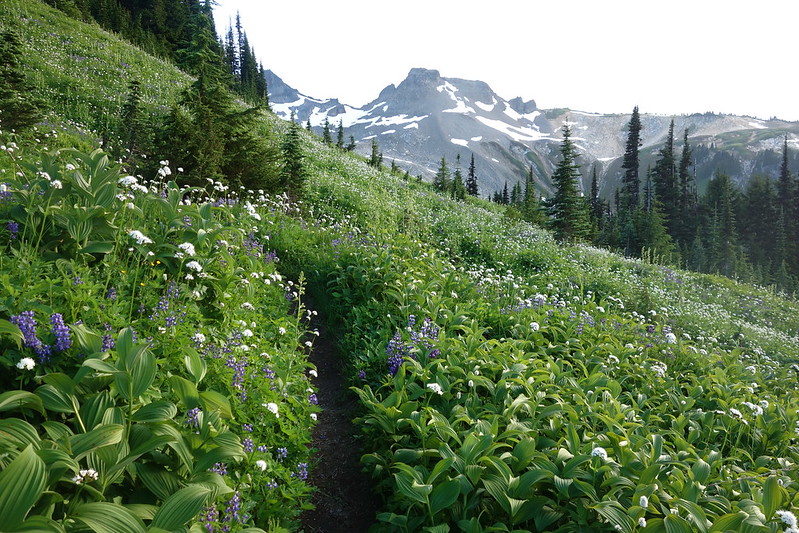 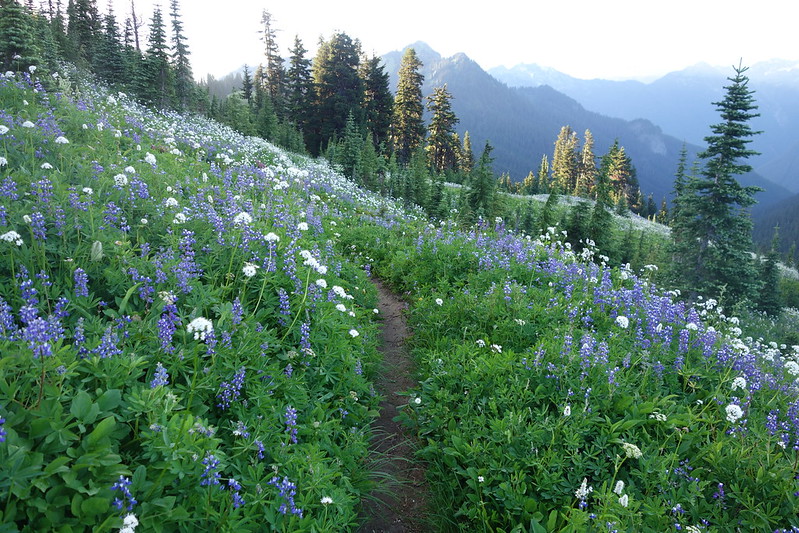 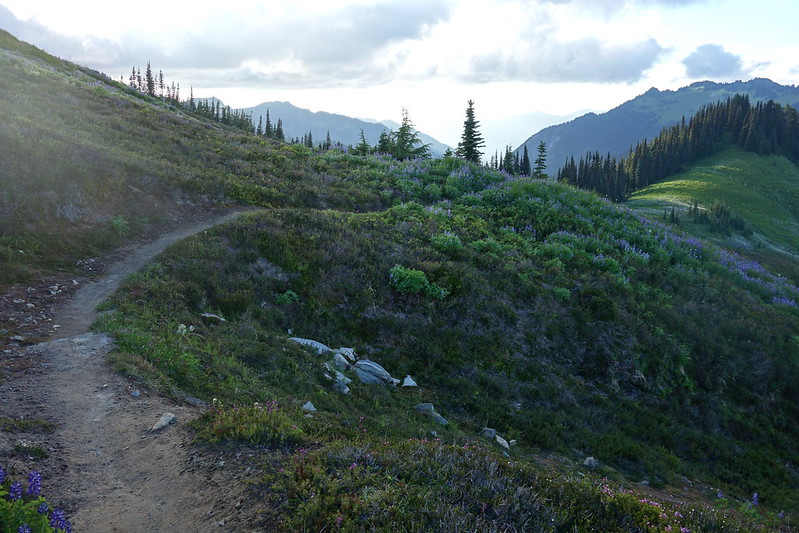 I’m camped on a ridge crest—the only campsite for miles—with a man from Germany, out for a couple months. He’s planning to just walk until he runs out of time. I like that. And he’s affable and effortlessly funny in that way that almost everyone I’ve ever met from northern Europe seems to be. It’s been such a pleasant evening, talking about work (he’s a teacher too), missing our wives, and what to do with the ridiculous can of bear spray his buddies back home made him bring. He’s wondering if it would work to make his freeze-dried food more interesting. I’m wondering if it might be good on my potatoes, and thinking that not all pleasures out here are retrospective.