I slept in this morning. Or, at least: I tried to sleep in. The sun filtered through the trees and dappled the forest with just enough light to force me out of bed and into one of the clearings to make one last breakfast.

Krista and I have plans to meet here, at Diablo Lake, around 7:30 tonight. I was camped only ten miles away, so I wasted as much time as I could, eating breakfast, exploring the camps, visiting the palatial backcountry bathroom, and just generally being pleasantly inefficient. 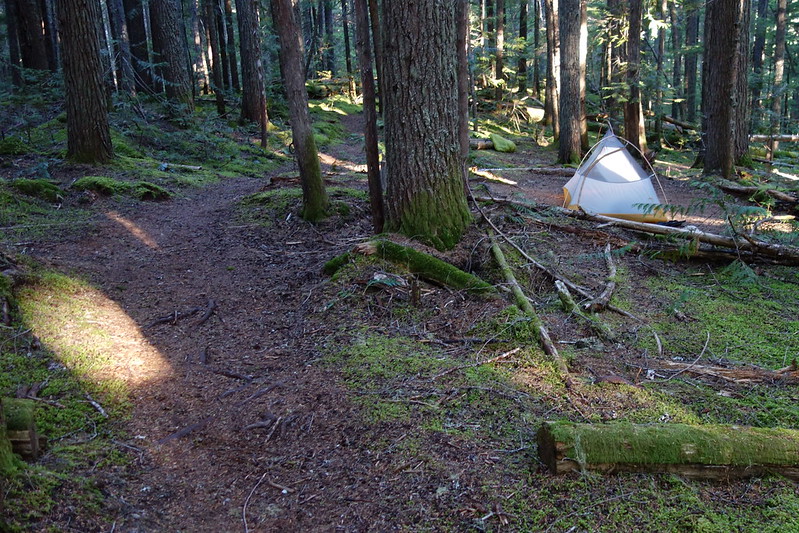 As I finally packed up, I said goodbye to all of my gear in turn: to my quilt, which I still unreservedly love; to my pad, which still seems impossibly posh; and to my tent, which I’ve sort of grown to hate. It felt weird, and a little triumphant, to put it all away for the last time. Like I was already at the end. 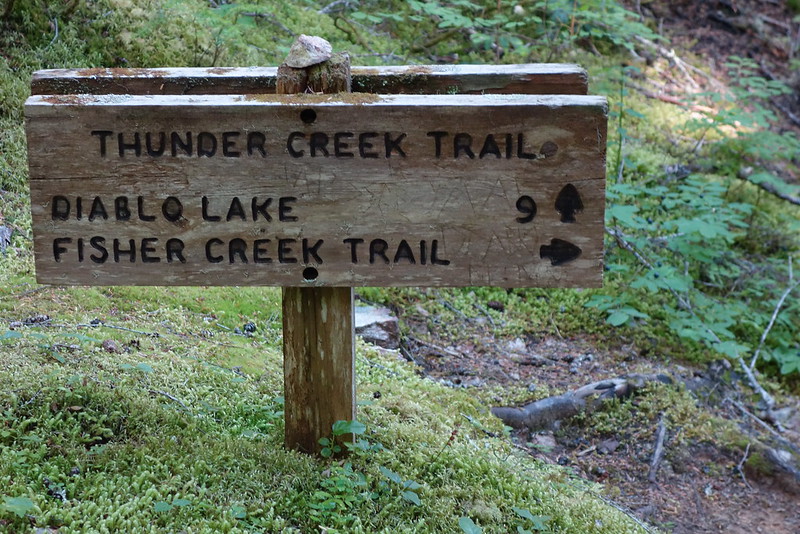 The first few miles from camp were surprisingly steep, switchbacking down, following Fischer Creek’s cascades into a deep canyon, surrounded on either side by tall, glacial ridges. But then it was just mellow walking through deep forest along Thunder Creek’s bottomless blue pools. 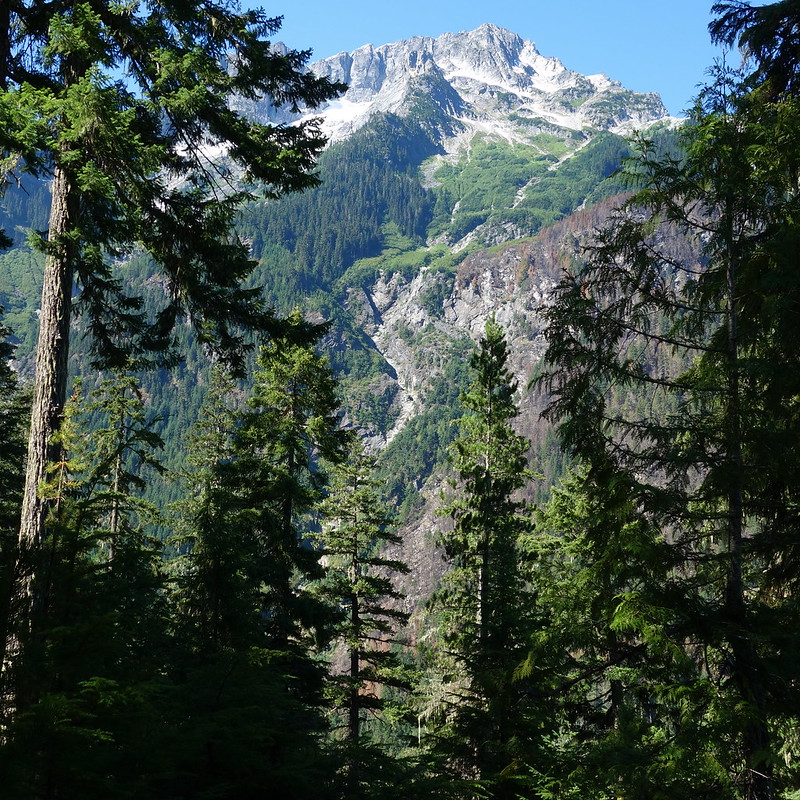 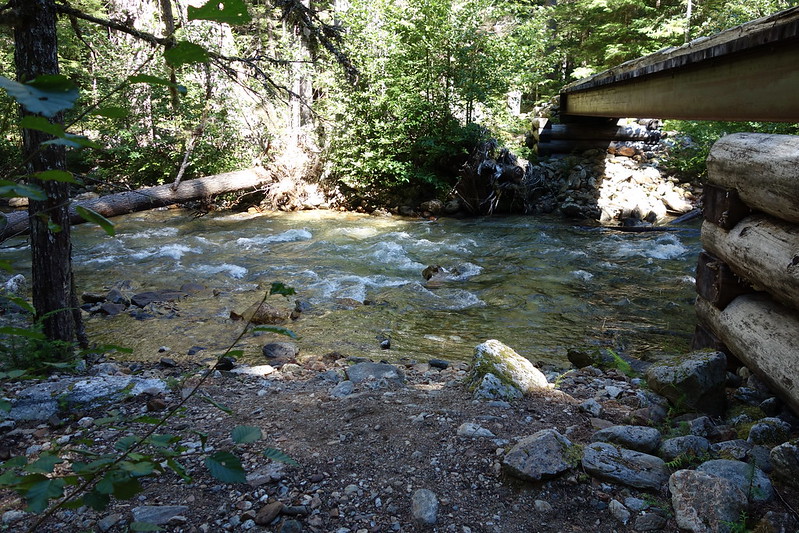 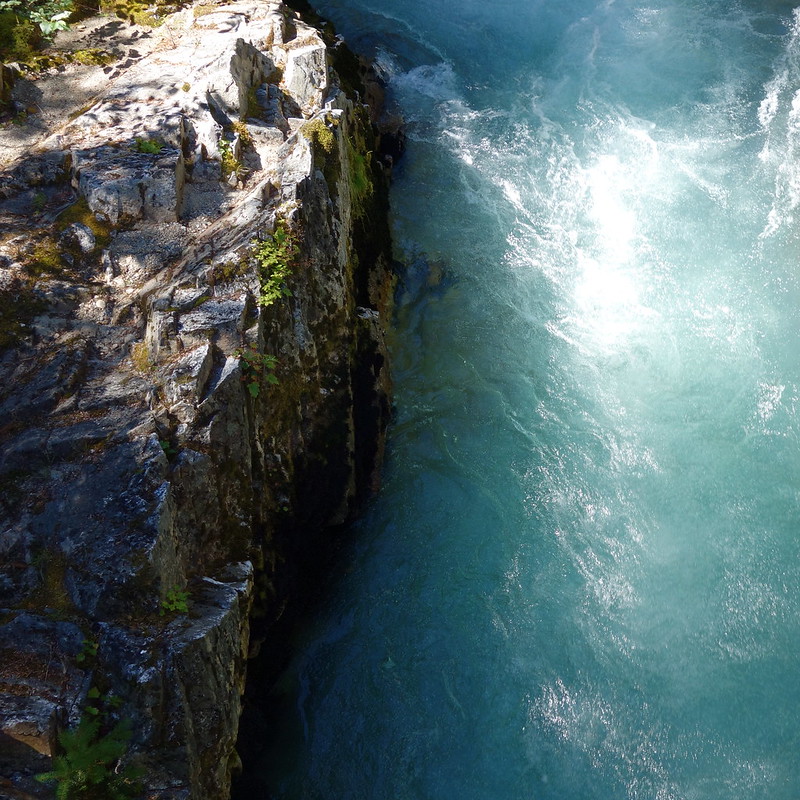 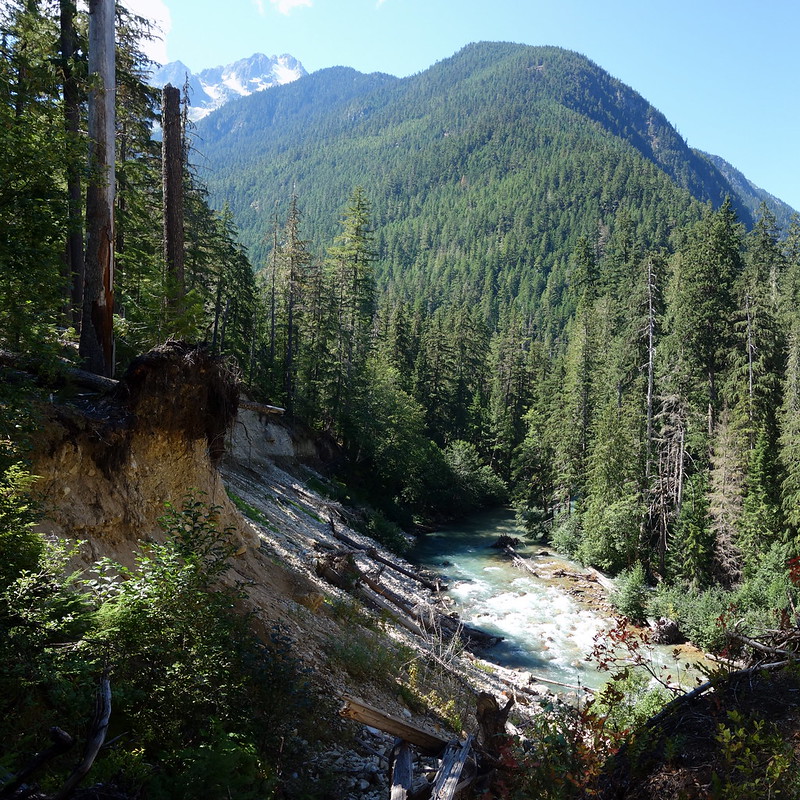 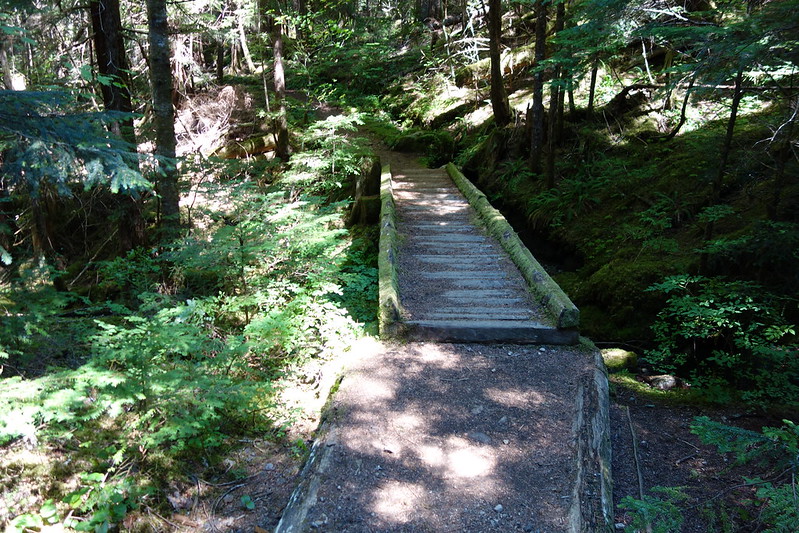 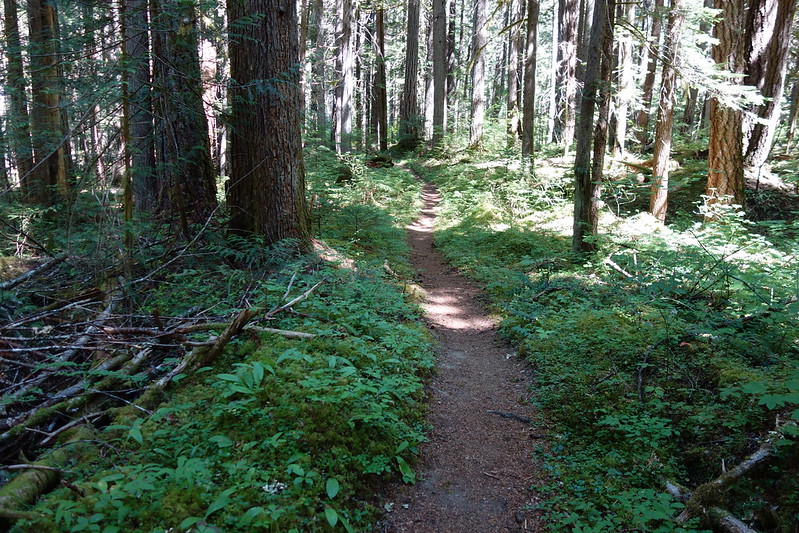 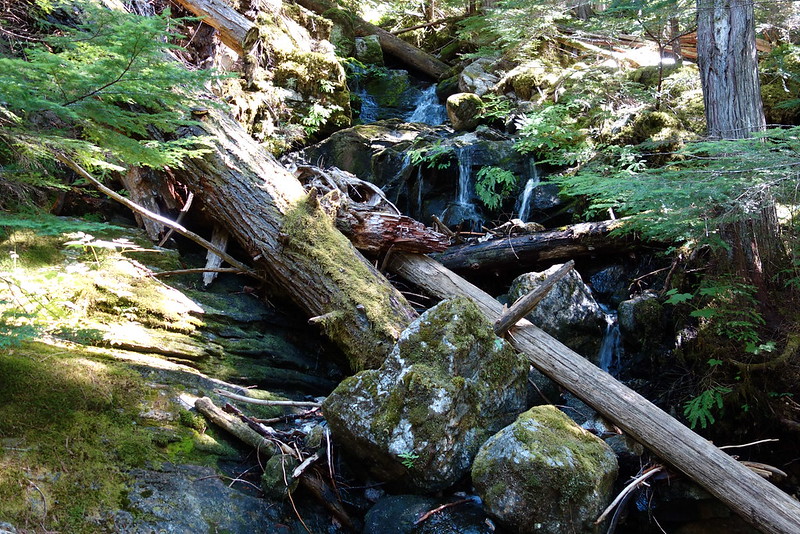 I started out around eleven, thinking that I could stretch ten miles into at least five or six hours, but despite frequent breaks, it only took a bit over two hours to hit Thunder Camp, just over two miles out from Diablo Lake. I guess I was excited.

I stopped at a broad bridge over Thunder Creek—now a proper river, in the process of becoming a lake—undid the waist and sternum straps on my pack, and treated the last couple miles like a valedictory lap. 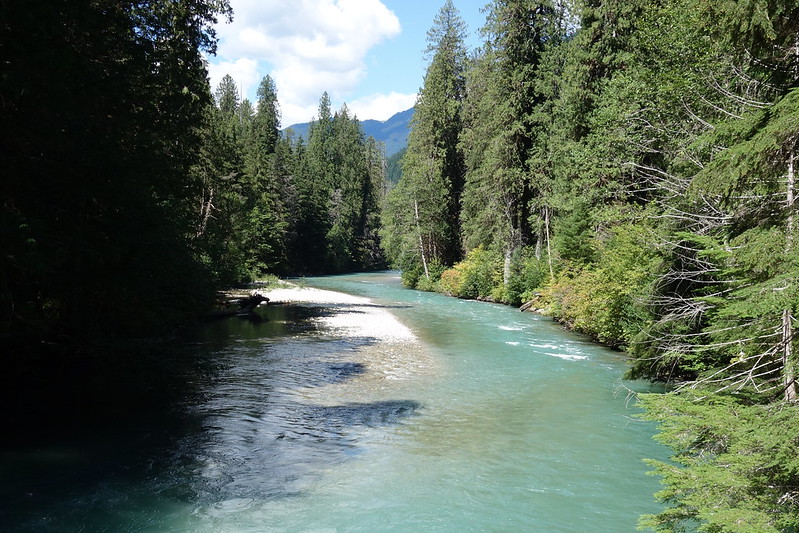 From the bridge, the trail became wide and flat, and I started seeing more and more dayhikers, out from Colonial Creek Campground. Just a trickle at first, then a flood—dozens of people, out in jean shorts for short strolls to the bridge. I felt preposterously magnanimous, saying hello to everyone that passed, most of whom looked away—or, perhaps, pointed their noses away—with something very close to horror.

And then, suddenly, there was a tangle of trails, an amphitheater, and Colonial Creek’s tasteless tarmac. It’s only Thursday, but the place is full with campers: campers roasting hot dogs, sitting on coolers, drinking Coors in the harsh afternoon light. And there are tents everywhere: crowded against cars, against each other, caterwauling clear to the bathrooms.

I walked through in a sort of daze, “as one wakened suddenly from a beautiful dream,” as though I was just waking up to a world utterly unlike the one I’d been walking through for the last forever. The world of woods and wild faded into hot cement and the smell of campfires and bug spray, and I struggled to keep or re-capture the feeling of just a few miles before.

I crossed the highway and found a small easement on the south shore of Diablo Lake, where I laid out my things and went for a swim, far out toward the middle. Looking back, it was just trees again, trees and rocks and rubble. The tents and fires and coolers were hidden behind a thick canopy, and I stayed there, treading water, until my arms got tired and I did a sort of lazy backstroke back to the shore, still staring at the blue sky.

I’ve had the easement to myself all afternoon, and have spent hours here, lying the sun, eating the last of my food, and writing a final letter to Krista. Slowly, the reality’s been seeping into me: I did it! What a strange month, spent all alone in the mountains.

The shock of civilization’s been fading with the evening light, and I’ve been thinking of something I read last night in the final chapter of that book I found in Stehekin: “After walking on this trail for so long, I feel as if it’s kind of a telegraph line—as if we’re still connected in some way to every point along the trail, and to every person we’ve met on it.”

After sitting on my easement all afternoon, eventually I meandered back up to the parking lot to meet Krista, and sat on an uneven rock at the edge of an empty space, watching headlights speed by. It was comforting in a way I hadn’t felt for a month, and I though, just as I did at the JMT last year, of the Roman poet Terrence: “I am human, and nothing of that which is human is alien to me.” And just as then, the feeling I had was more than that. It was the feeling that I am of this world, and that nothing from this world can be alien to me. Maybe that, ultimately, is the deepest thing one can learn from being out here. The cars and camps and woods and wild and bears and deer and friends from a thousand far off places: they’re all home, in a way.

Right on time, the headlights of our Honda hung a left and pulled in. Krista jumped out, and I jumped towards her, and she held me. “You’re so bony!” And I started to cry with happiness at this home, more home than anything.

My little corner of the world. 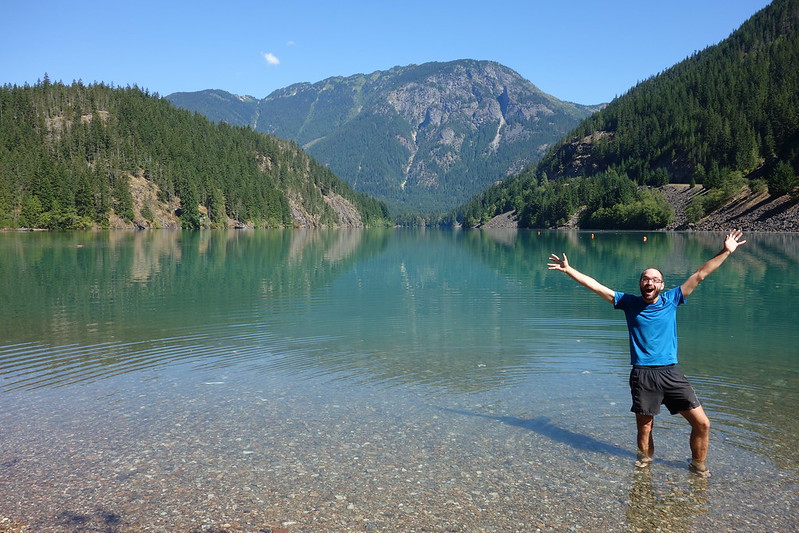