I stayed up late last night reading my book, and woke up early this morning to brambly footsteps in the huckleberry slope above my tent. I looked out in the just dawn grey to see two black blobs twenty feet away. I put on my glasses, and… bears! Two of them: an adult and child, walking through, utterly unconcerned with me or my tent. I stared for a while as they bit at the bushes, feeling like I’d been let in on the world’s best secret. The adult was bigger than me, but moved through the bushes with a lightness—and, I almost want to say, a playfulness—that I’d never imagined.

I stared for what must have been fifteen minutes, smiling and at the edge of tears, until they caught wind or got sick of being on display, and ran up the hill, looking back only once, not scared or angry, but with what almost seemed like curiosity.

The thing that gets me is that this is all always here. The bears, the rushing streams, the flowers and sunsets and the sound of the wind through the trees: it’s always here. It was here, in some form, before we were. And, with any luck, it will be here after we’re gone.

It will snow in a few months, and we’ll all be driven out. The trails will be buried, the flowers will go dormant, the streams will freeze or flow less steadily under several feet of snow. The bears will slow. But it will all still be here, even though I won’t.

It’s strange to love a world that doesn’t need me, that exceeds me in every direction and with its size makes a human life seem small and silly and insignificant, a world of which I’m not the center, where I can be at most a visitor. But isn’t that exactly what we want from wilderness, to be confronted by the world without us, and to see, for a moment, the view from nowhere, sub specie aeternitatis?

There’s this thing I really love in The Hitchhikers Guide to the Galaxy: The Total Perspective Vortex, a machine that shows you your true position in the universe. The idea is that we’re all so unbelievably, unthinkably insignificant that seeing where we really stand would be like torture. “If life is going to exist in a Universe of this size, then the one thing it cannot afford to have is a sense of proportion.” But that doesn’t seem exactly right to me. Our eyes point outward. What matters is not where I stand but what I can see. And it’s enough, it’s more than enough, to see this all stretching out behind and in front of me.

The first few miles of today were uneventful, following Park Creek past a few old camps and through a new burn. But eventually the trail broke from the trees, into a massive basin below Buckner Mountain. The switchbacks up to Park Creek Pass were sort of rough—eroded tread with tons of blowdown—but the views were so good that I barely noticed. 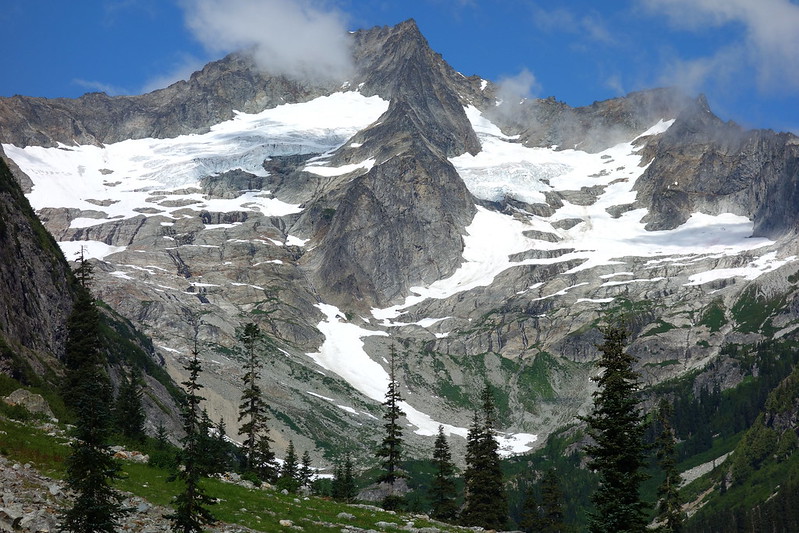 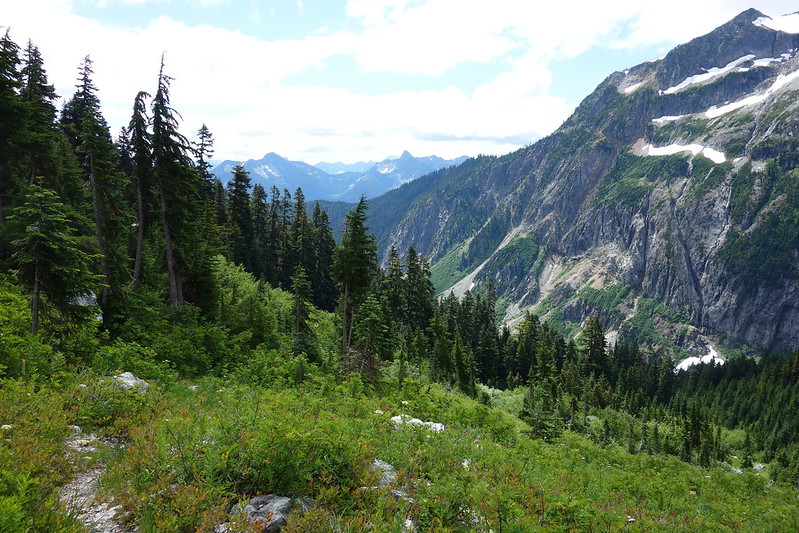 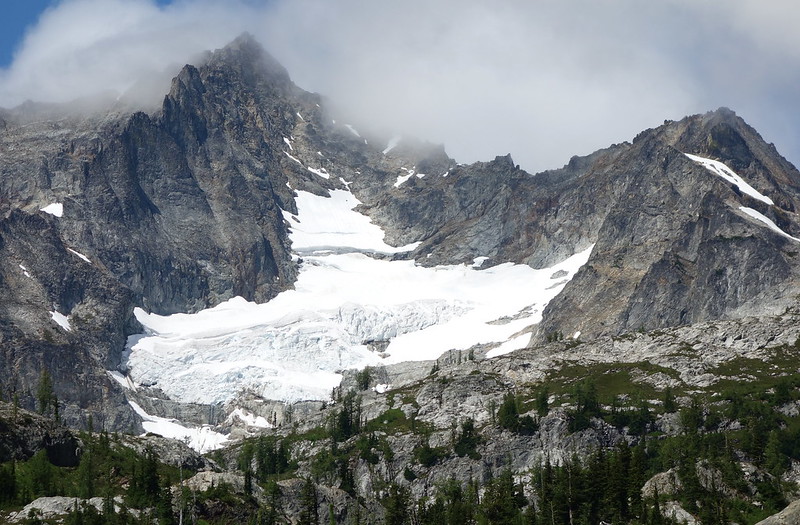 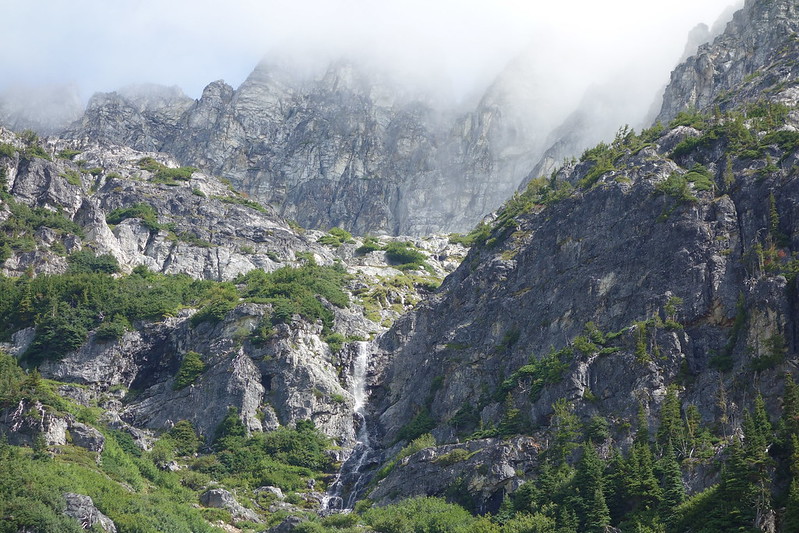 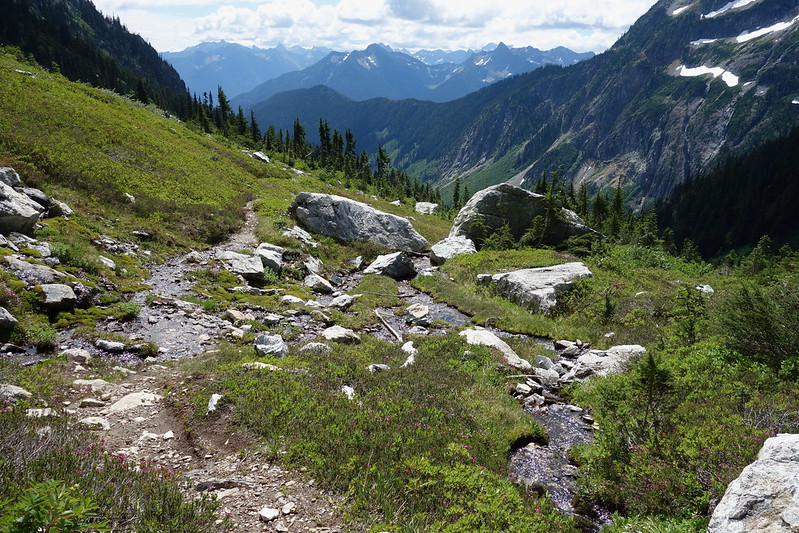 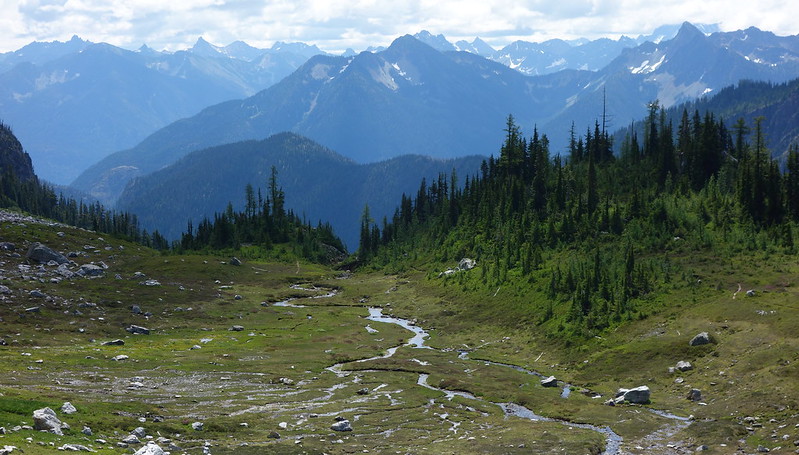 Park Creek Pass is a tiny notch in a rocky ridge that runs between Buckner Mountain and Storm King. Approaching, the trail turns steeply up, out of the bright green meadows at the base of Buckner Peak, and into fields of talus that lead to Thunder Basin. 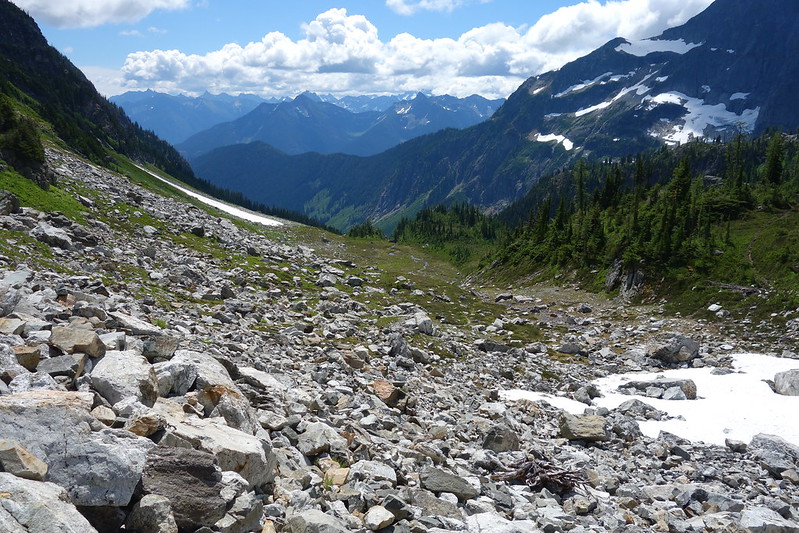 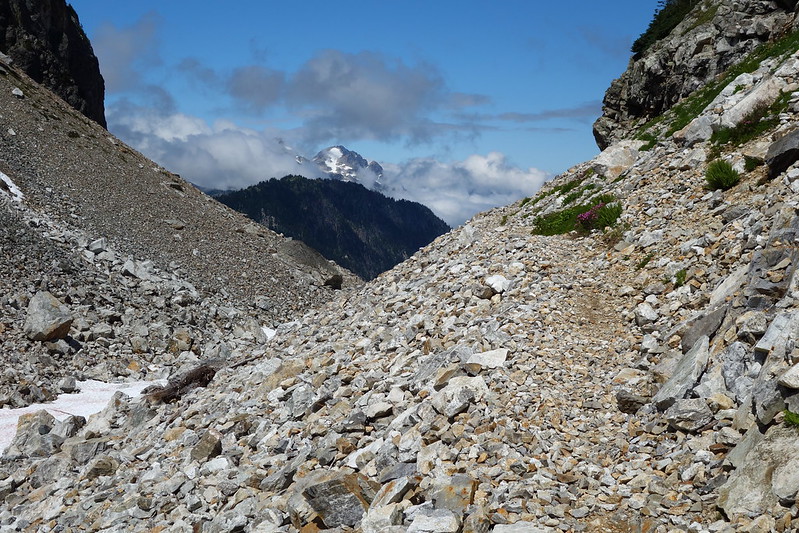 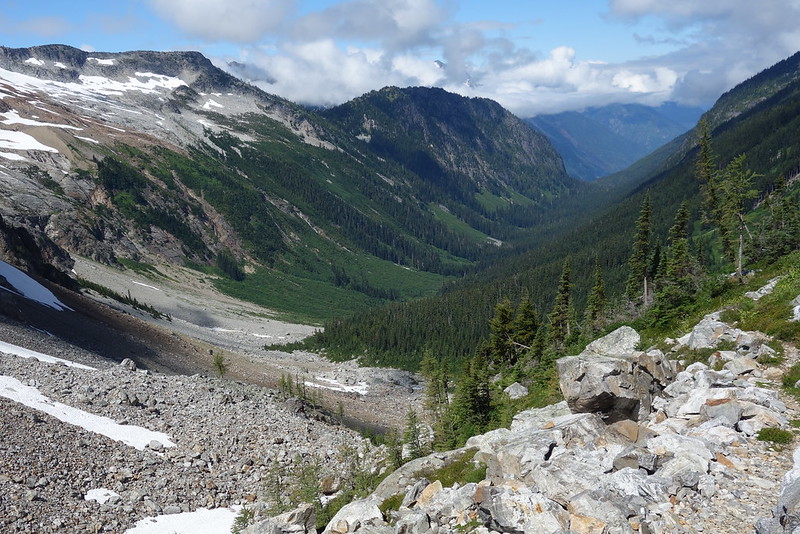 I took a rest near the top, perched precariously among basketball sized boulders, and had a quick lunch, looking back and forth down Park and Thunder Creeks, between past and future. Then it was down a series of rocky, overgrown switchbacks to Thunder Basin. 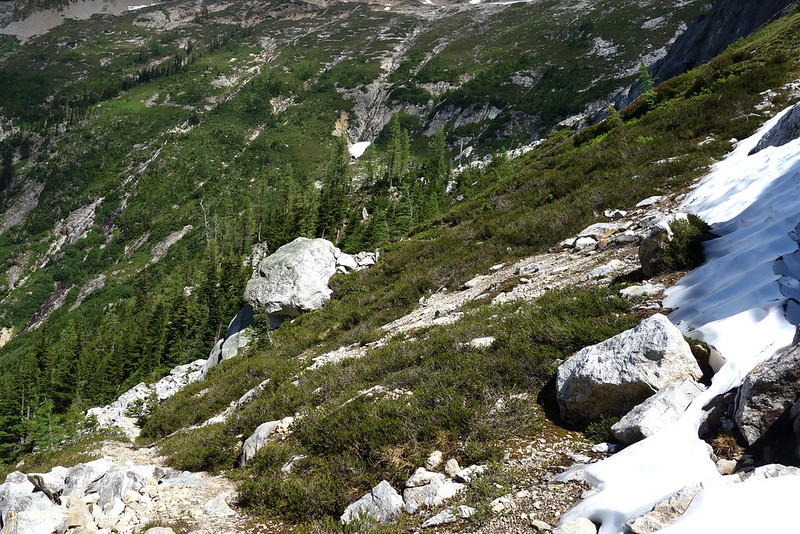 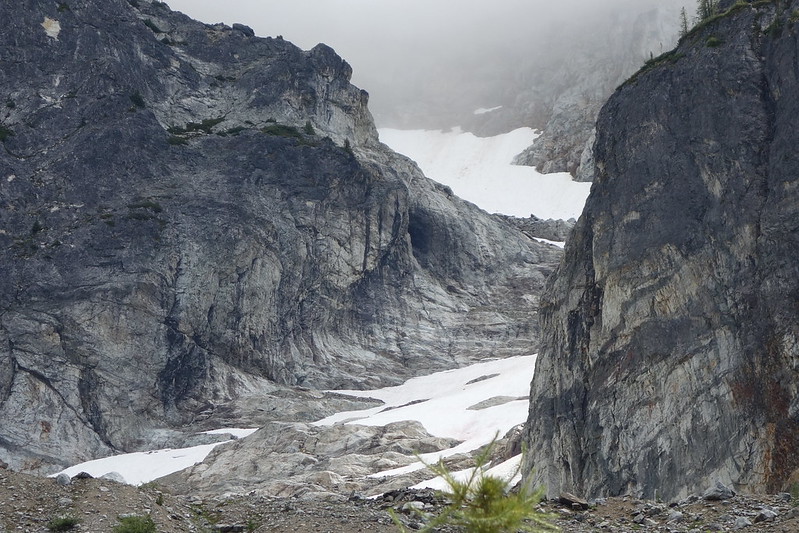 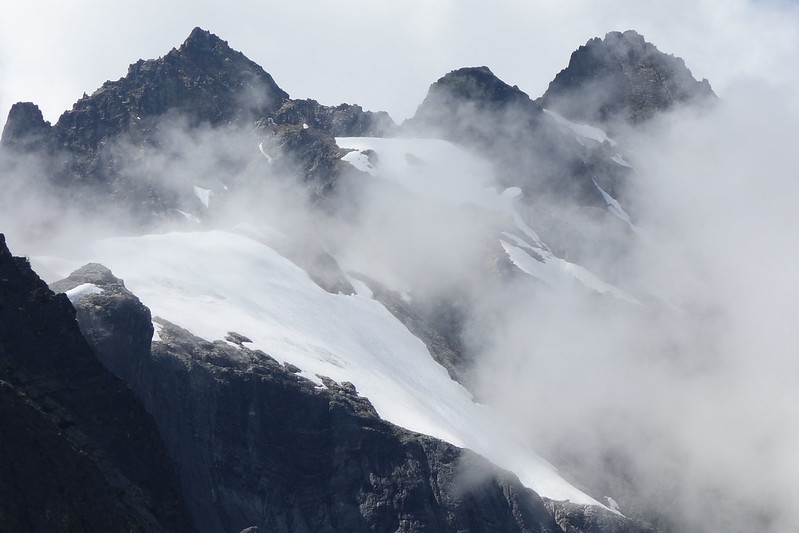 Thunder Basin felt like a park gone wild—like someone had planted acres of gardens, dug miles of intricate irrigation canals, then left, and left the place untouched for centuries to grow on its way.

It was also thick with flies. Every time I stopped they swooped, diving with manic glee at every bit of exposed skin, particularly my ears. Not sure what was going on there. 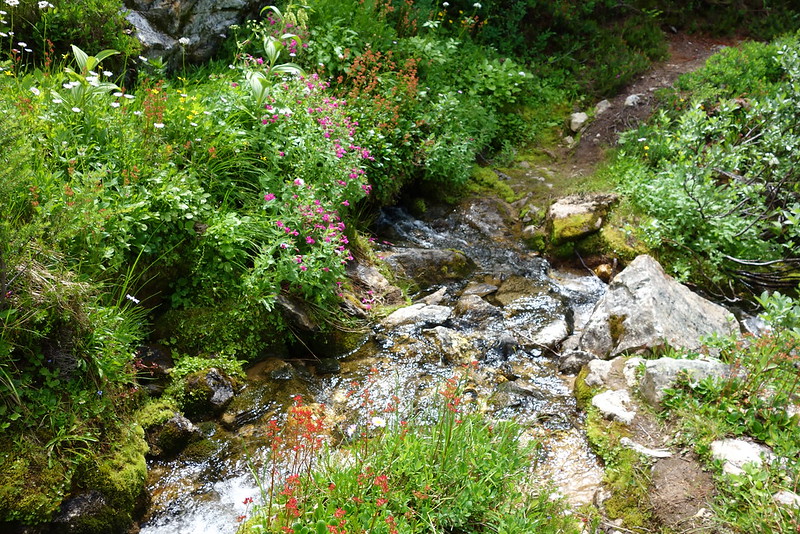 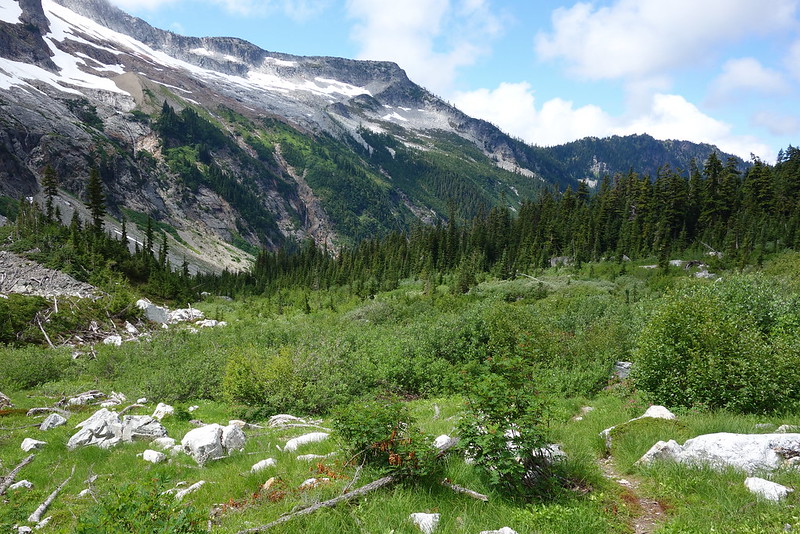 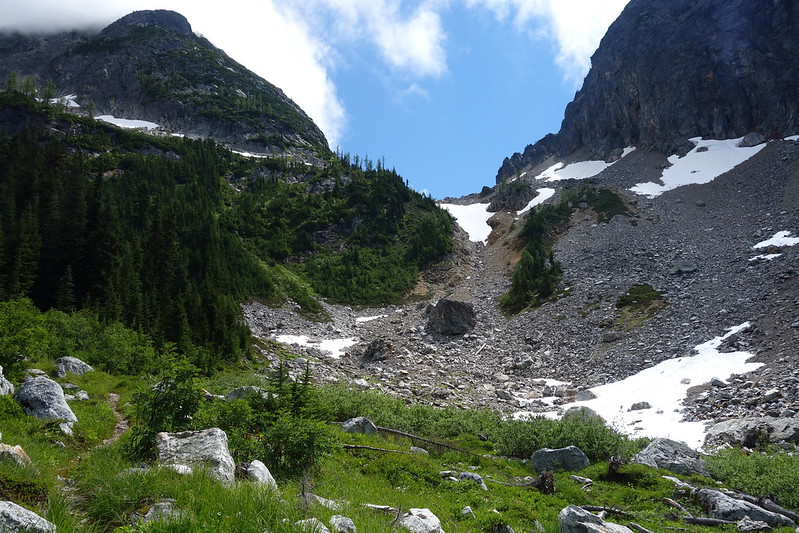 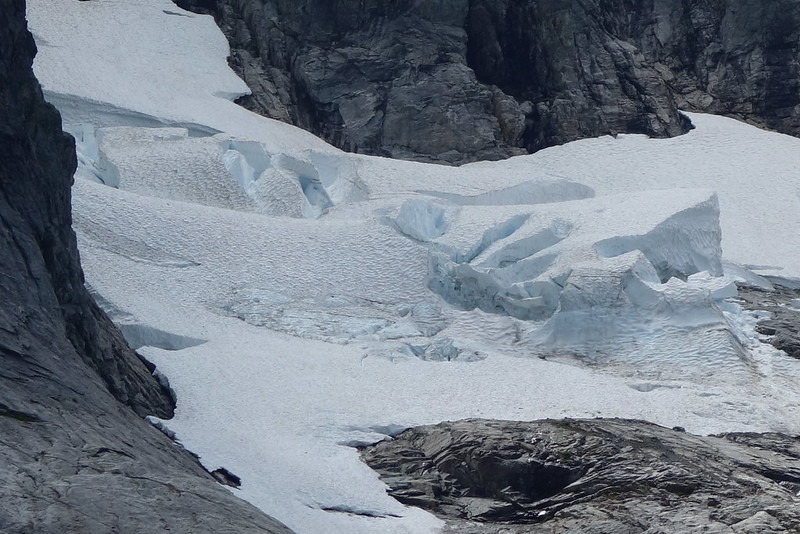 Halfway through the basin, I turned a corner and was suddenly staring straight at a young deer with antlers still in velvet. Like the bears earlier, he seemed serenely unconcerned with me. 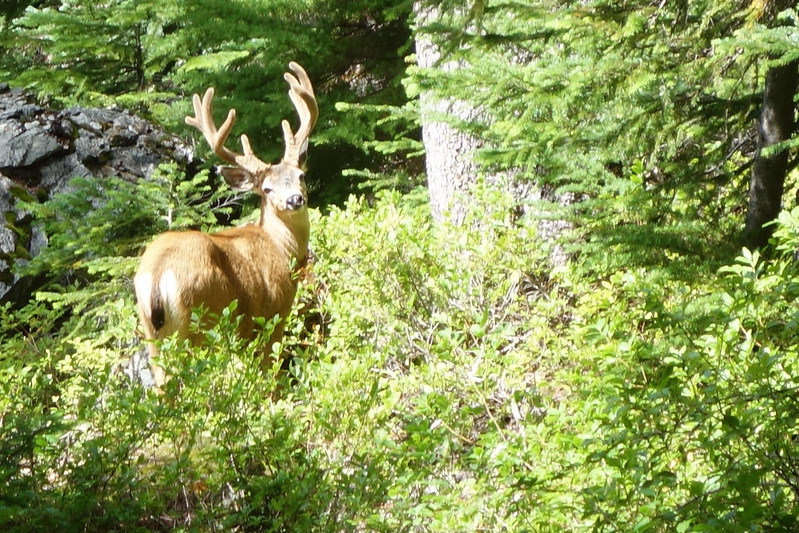 So unconcerned, in fact, that he didn’t budge, even as I continued cautiously on, beating my trekking poles together and doing my earnest best to seem threatening, like John Wayne or something. John Wayne? I don’t know. Who are deer scared of? Apparently not me. “Buddy, you’re no John Wayne.” 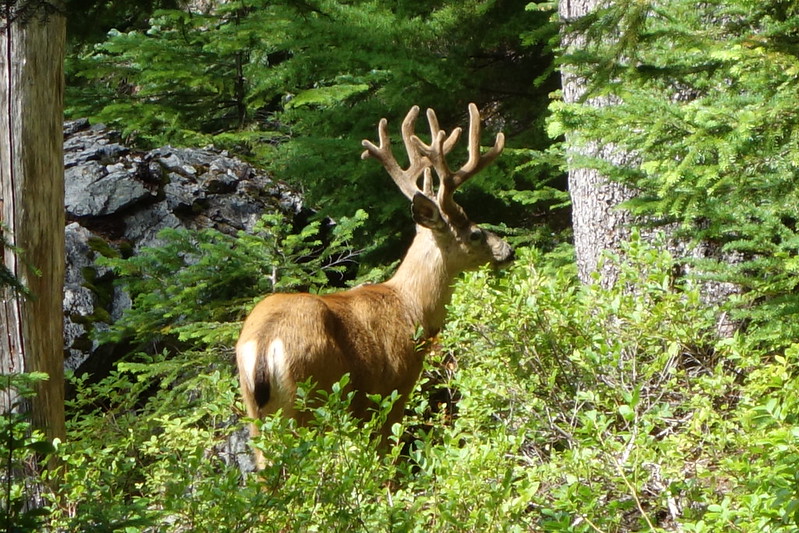 Worst of all, after a while he stopped even looking at me, and just went back to snacking on something in the bushes. I bushwhacked around, giving him as wide of a birth as possible, but no sooner had I passed then I heard a joyful trotting, and looked back to see my Buck Buddy following ten or fifteen feet behind. “Come on! Give me a break!” By this time, I was legitimately trying to reason with him, but alas. Then I switched tactics and tried to do my best Jimmy Cagney. But wait, are deer scared of Jimmy Cagney? 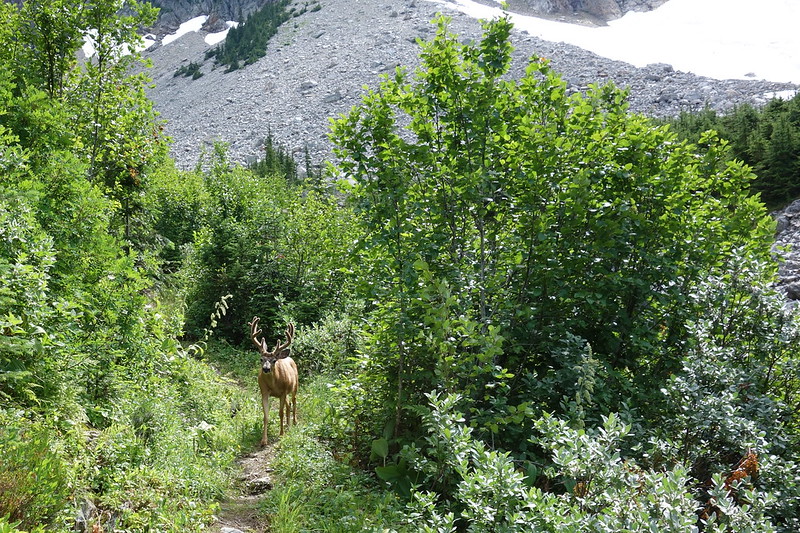 Apparently not him either. We went on like this for nearly a mile: him flitting untroubled to and fro, stopping for snacks, frolicking down the switchbacks, playing in the streams; me white-knuckled, sweating and nervous, wondering if there was such a thing as cannibal deer.

Eventually we reached a lower meadow, and he trotted out—happy, it seemed, for the passing lane. Oh. It’s not that he was following me down my trail. It’s that I was getting in the way of his. 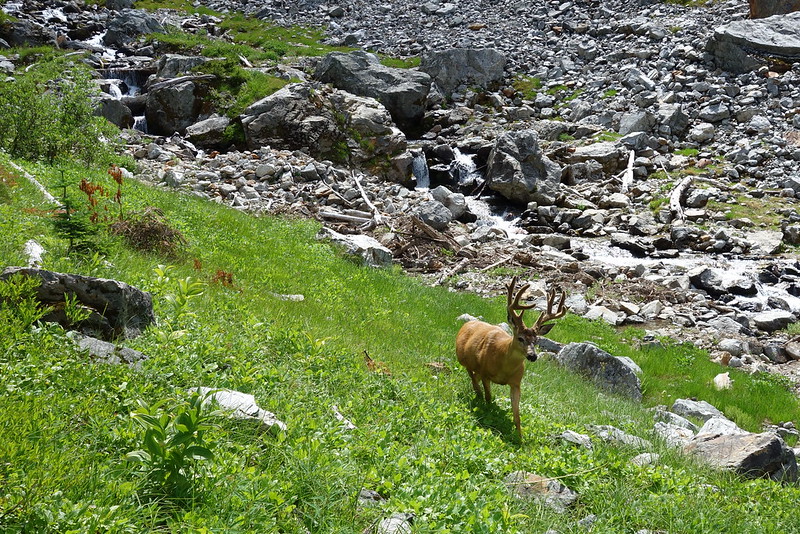 Freed of my terror, I stopped for a bit to placate the flies—I guess everyone deserves a snack—and to take a few pictures of the glaciers above. It would be a beautiful place to stay, provided you’re not beset by the same sorts of ungulate anxiety that was getting to me. 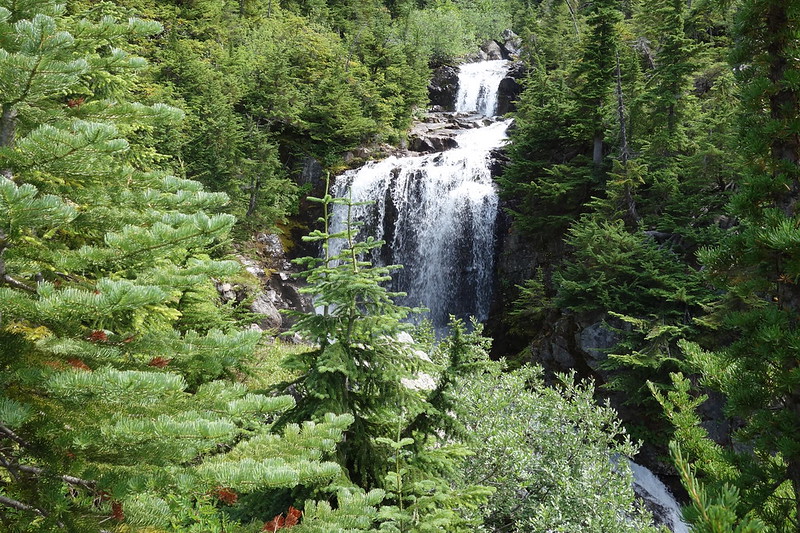 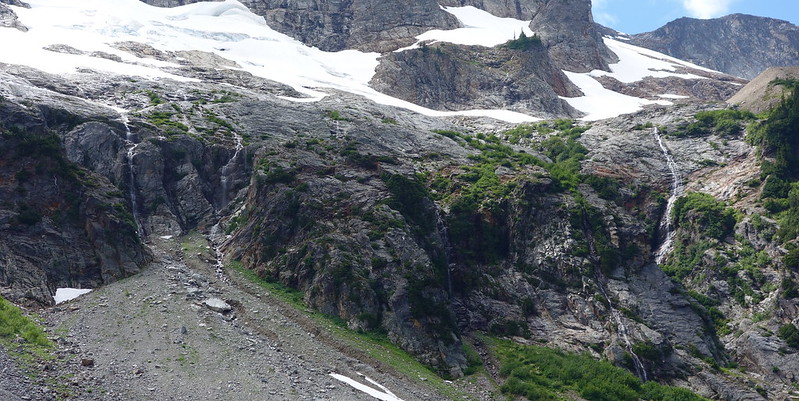 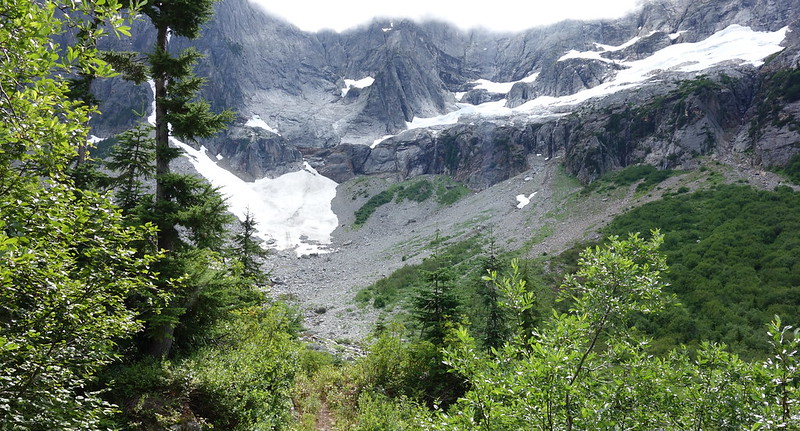 After the flies and I had had our fill, we continued together into the woods, down a few thousand pleasant feet to the old Skagit Queen Mine, and up an unexpected, and very unpleasant, thousand feet back up to Fisher Creek. 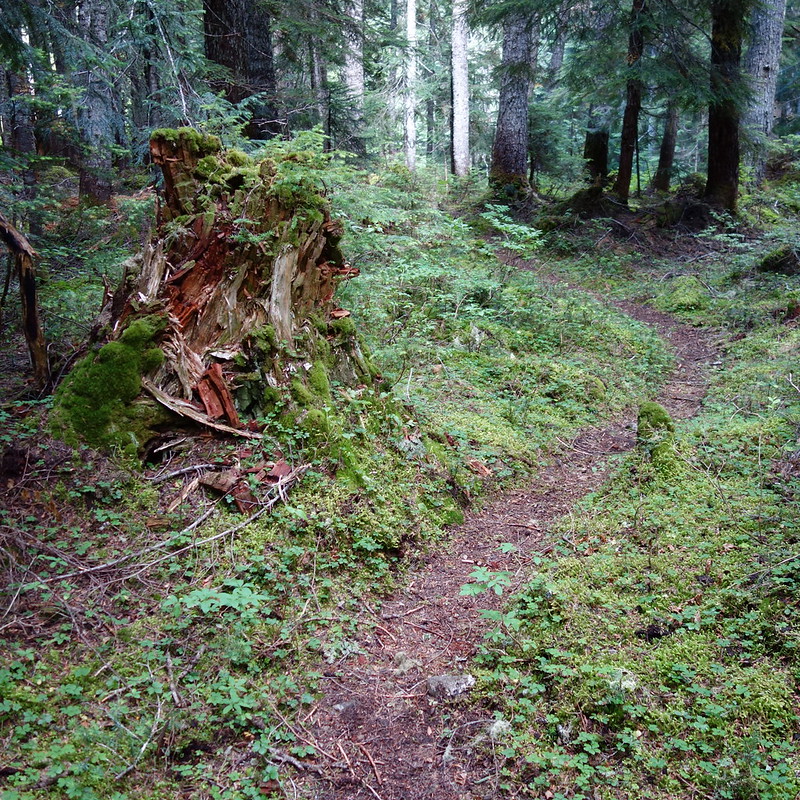 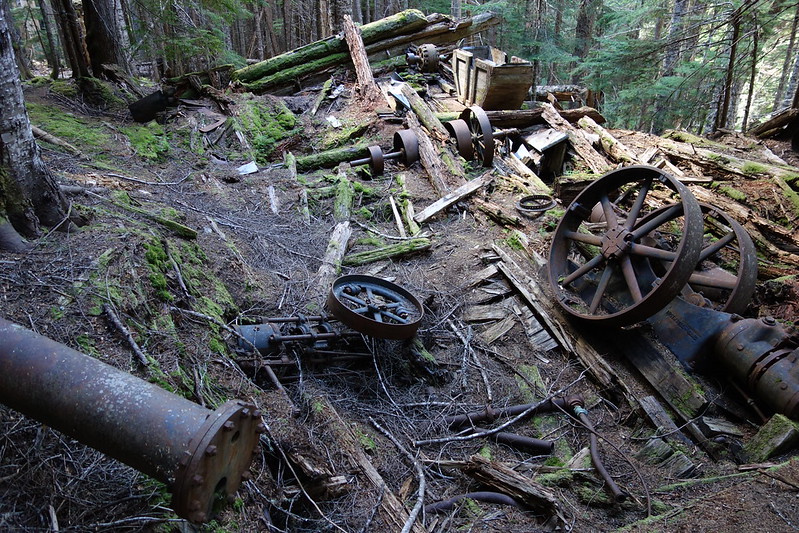 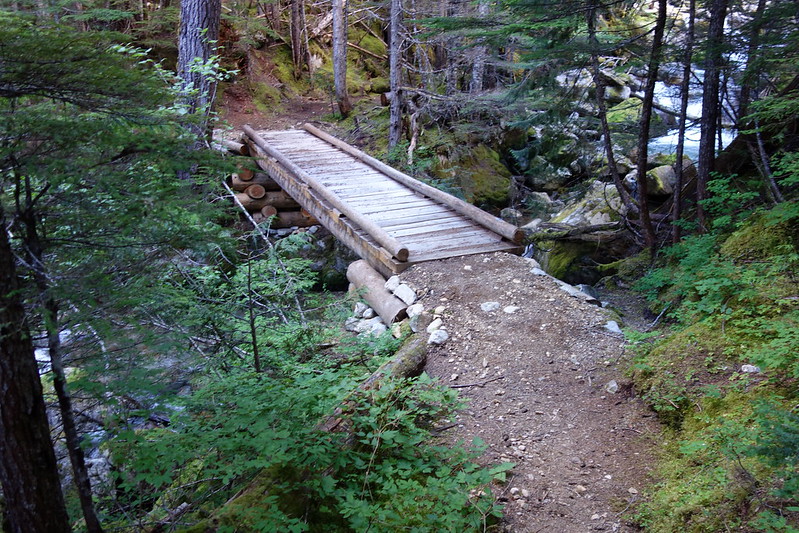 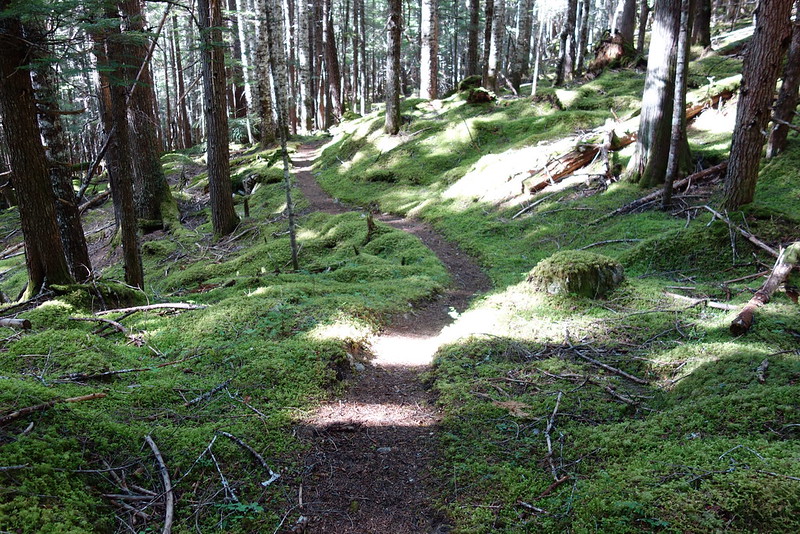 The walking was easy, and so my mind wandered more widely. The woods were pretty but anonymous, and I thought again of the gorge. Of home. I thought of my first day, climbing sadly out from Panther Creek, through trees a lot like this. It’s funny: that first week was so hard. I thought every day of being done. I spent every night dreaming of home. And I miss home now too, but it’s different: deeper but less desperate.

My camp tonight—my last camp—is an enormous site near the confluence of Fischer and Thunder Creeks. The Ranger in Stehekin gave me the horse camp, and so I have a massive meadow all to myself: a half dozen fire pits, three or four kitchen sites, and enough space for an army of tents. But it’s just me. Just me changing into warm clothes for the night. Just me rambling over to filter water. Just me cooking dinner, making a night of it, drinking the last of my bourbon—too much, staring at the sky and stars. Just me saying some words to the close and holy darkness, retiring to my tent one last time, and getting sleepy to the joyous sounds of surrounding streams. 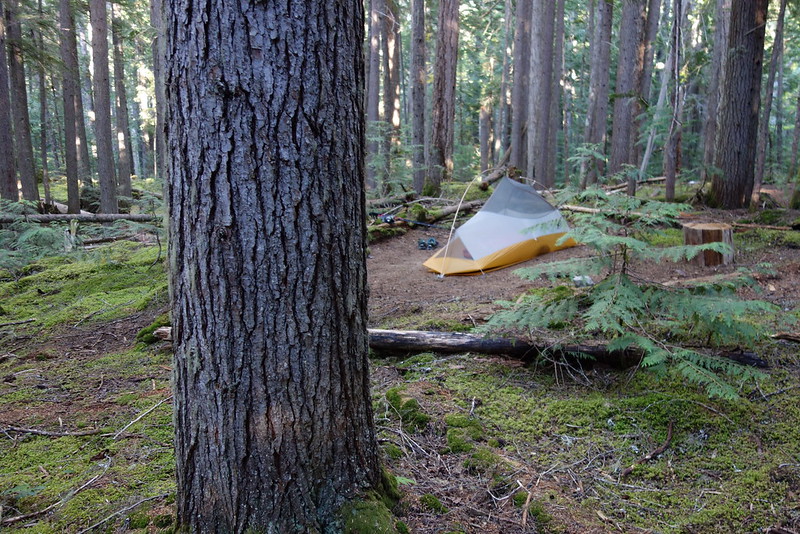 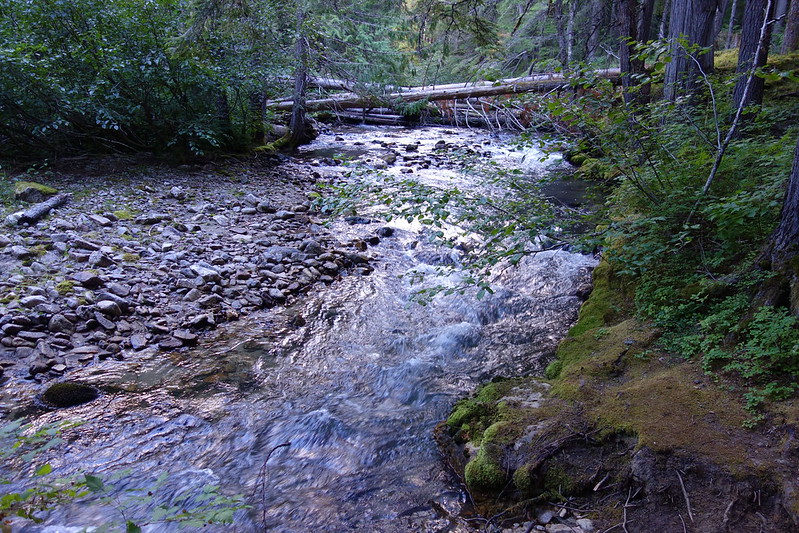 3 thoughts on “WA PCT, Day 25: The World Until Yesterday”