I’m standing at the counter in the sunlit Staircase Ranger Station, as a young ranger looks up and down my planned route, sour faced. Dust dances in the beams of light that streak in from the arching old windows, gathering on dog-eared paperbacks and sun-bleached maps that lean along the sill.

“Well, holy shit.” He smiles. “This is quite the trip you’ve got planned.”

I laugh a little nervously. “Well, yea. I guess I wanted to see the whole Park.”

“Well, you will.” A long pause. “If you do it.” He pauses again to look down. “These are going to be some long days.”

I try to sigh in a way that simultaneously says, “I know” and “They’re not really that long.” But I probably just look scared.

I guess this is the thing about doing a long-ish hike in a place not used to long(ish)-distance hikers. Along the PCT, everyone understands. They expect people to be going for long stretches, mailing food, acting like bums. But out here, it seems less common.

The ranger looks up again. “So what I’m going to ask is: I’m going to ask you to take this to the entry gate. We don’t have electricity here, or a phone. But they can call Port Angeles, and work everything out with them.”

So I walk down the dirt road to the entry gate, where I stand in a line of cars, and a gruff old ranger looks at my schedule, nods slightly, utterly unfazed, and calls Port Angeles. “Hello, who am I speaking to? Hi Scott. So we’ve got a thing to arrange.”

He reads my trip plan into the phone, adding the drainage. “So we’re in the Elwha now… Now the North Fork Quinault… Now the East Fork… Now back to Skokomish…” They chat a little at the end. “Yea, it’s a long trip.” Then he hangs up and smiles. “All set.”

They stamp my homemade itinerary with an official park stamp—there’s not enough space on their permit forms to write out where I’ll be every night—then wish me luck. Back in the old Station, the ranger looks wistful. “Well, wow. Have a wonderful trip. I’ve never seen some of those places.”

Krista’s coming for the first night, so I run back to the car to get her. She’s been waiting patiently, watching dayhikers stream in from Hoodsport and Olympia, filling the parking lot past capacity.

It’s going to be a short day—maybe ten miles total—so we lollygag a little before heading out, walk down through the two-story tents and burnt breakfast smells in the Staircase Campground to a broad bridge over the Skokomish. It’s rushing and rumbling through a shaded maze of boulders, light blue and clear in the cold morning air.

Then, finally, to the trail. The route here was originally a road, extending four miles up the valley, nearly all the way to Seven Stream, but it was abandoned decades ago, and left to fade into a wide, pleasant path through lush stands of old growth fir and cedar. We walk side-by-side, and stop at every corner for pictures of the river, and each other. 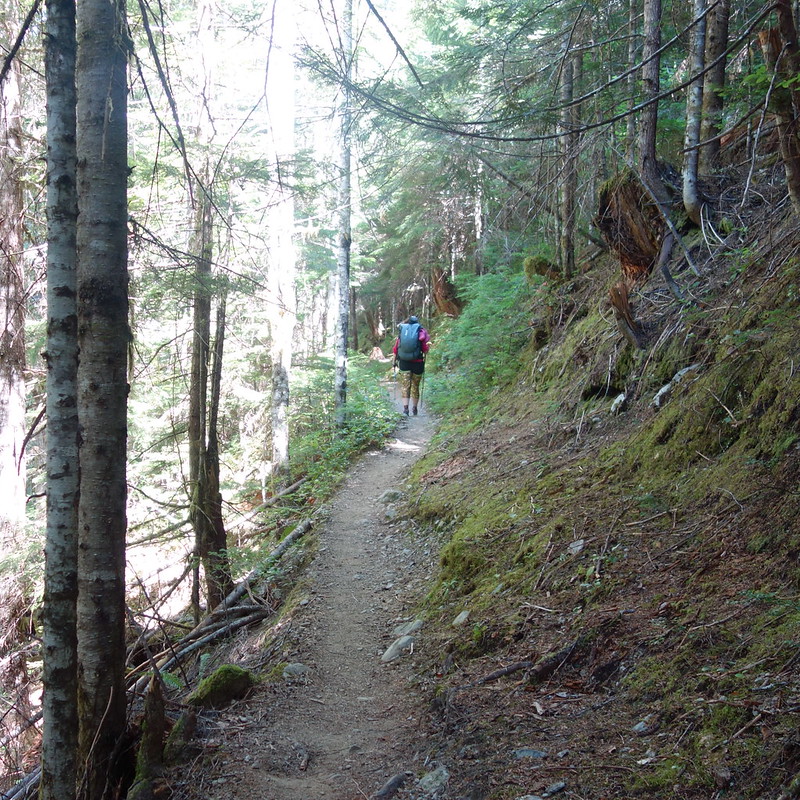 After a few miles, the trail enters an old burn, now overrun by new growth and blooming fireweed. The thick woods come and go, as the trail passes through deep shade and sun-dappled clearings, stream-watered meadows and silent, stately groves.

We stop for lunch at a series of abandoned camps near Madeline Creek. The old flats and fire rings are covered by deer fern and blown down trees, but we find a perfect log for sitting, just at the edge of the creek, and stay for a while, watching it cascade beneath the trail’s tall bridge. 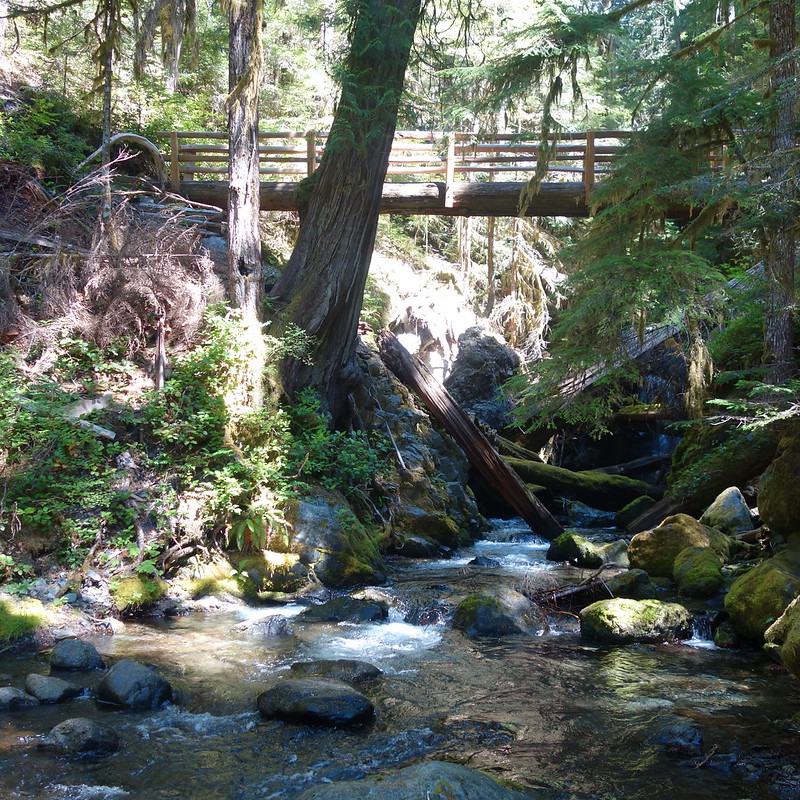 Most of my hiking for the last couple years has been alone. Not on purpose, exactly, it’s just that I’ve had more free time than Krista, and in any case I maybe need to work on my pitch: “So I know it’s raining and there won’t be any views and this trail maybe doesn’t exist anymore, but do you want to wake up at four tomorrow and walk forty miles?” But it feels so good to be here together, eating with our feet in the water, seeing things through each other’s eyes.

I don’t really want to leave—maybe we could just stay here, maybe I could stay for two weeks, just watching the water change?—but there are miles to make, so we pack up, and scramble back to the main trail and bridge. Then it’s on to Donahue Creek and another bridge, this time over the North Fork itself, where the river is narrow and deep and fast. 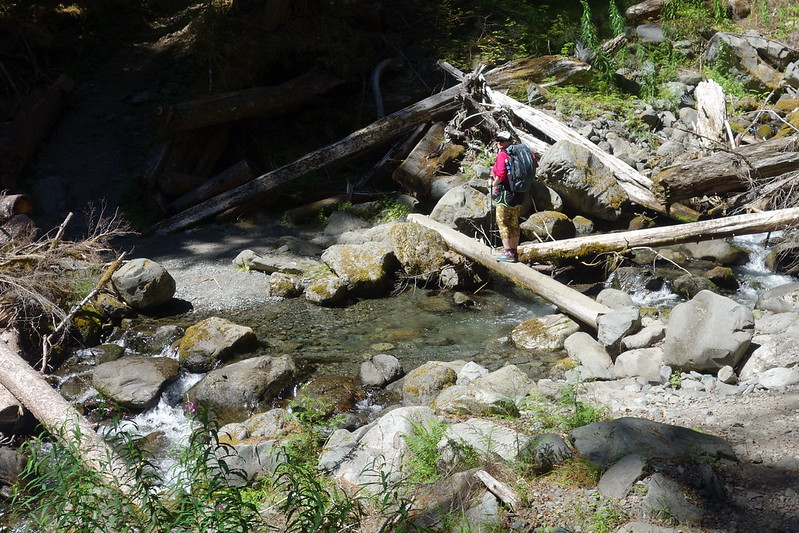 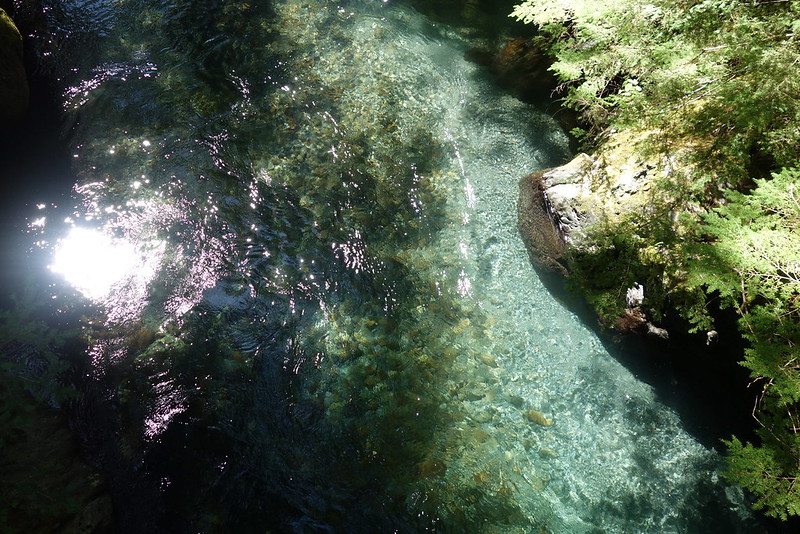 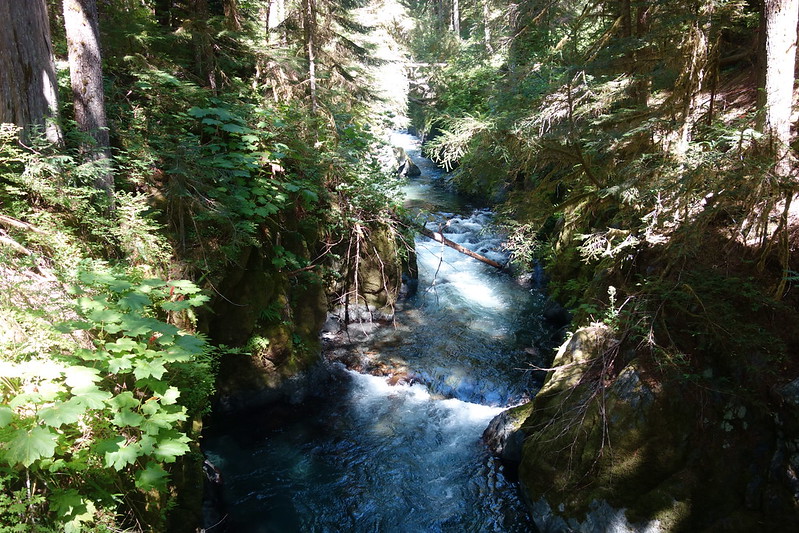 After crossing, the trail joins the route originally taken by the O’Neil Expedition in the late 19th Century, the first organized group of whites to explore this part of the Olympics. It took them the better part of a summer to beat a path through the salmonberry and devil’s club, but we pass with no trouble, easily enough to walk looking up, at cedars that were saplings before Columbus. 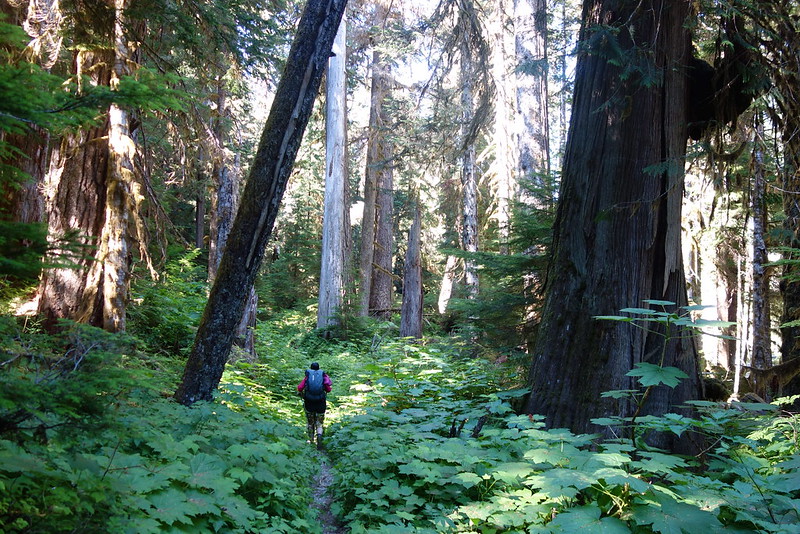 The next several miles pass quickly, through glades of ancient trees and along the maple-lined river to Nine Stream, the North Fork’s chief tributary, which cascades down from the still-frozen snowfields in the steep canyons between Mount Duckabush and Steel. 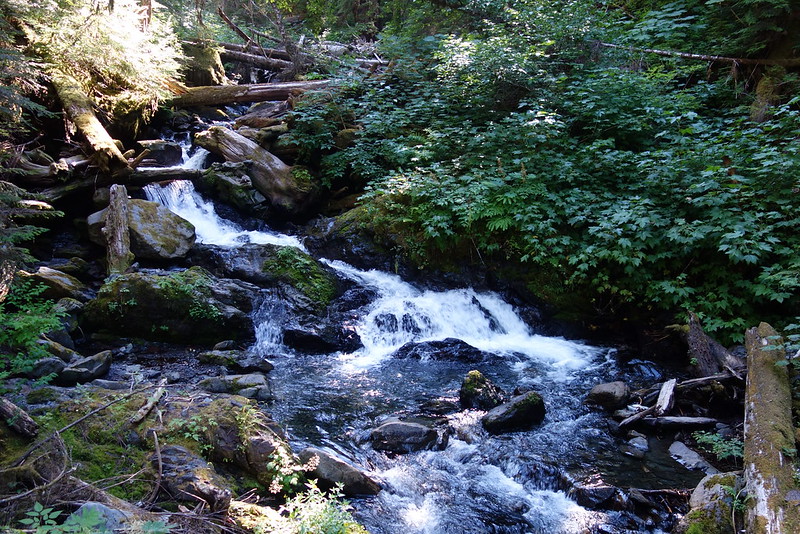 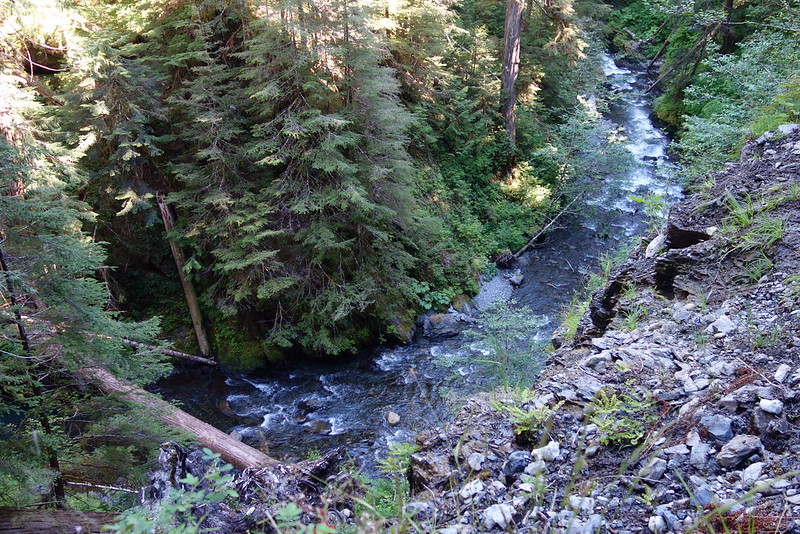 Crossing takes a little work—some boulders, then a submerged bridge, then some more boulders—but we make it dry, and find a camp in the shaded hills above the trail.

We eat dinner on a gravel bar above Nine Stream, watching a waterfall a few hundred feet up the creek. It’s surprisingly crowded here—there are at least a half dozen other campers in the flats below—but we have the falls all to ourselves, and stay until sunset pushes us back to camp and into the tent, where we fall asleep early, holding hands. One last night together. 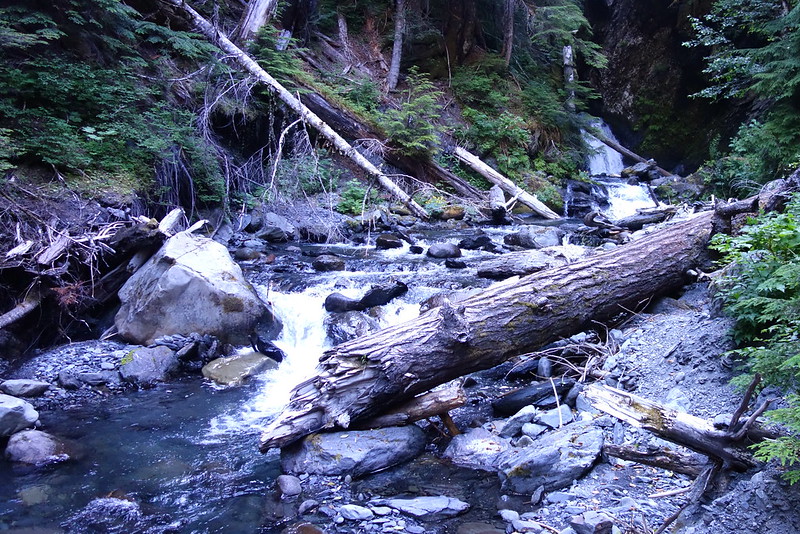 2 thoughts on “Across the Olympics, Day 1: The Land That Slept Late”