We sleep soundly to the rumble of Nine Stream, but our pads have a more fitful night, slipping around our new tent’s silnylon floor until we wake up at first light, pleasantly piled on top of each other. “Well this could be worse,” I tell Krista cheerily. A muffled mumble emerges from somewhere far below. “That’s because you’re on top.”

I move my pad from on top of Krista’s face, and untangle out to make an early breakfast.

I make breakfast and start to pack up with an inefficiency that’s absurd, even for me. The faster I get ready, the sooner we have to say goodbye. So I do it all in slow motion.

“Yes, but just a teaspoon.”

We’ve planned the goodbye in advance. It has to be quick, or else one of us—okay: I—will start crying. So we cross Nine Stream again, together, say a clipped goodbye, then I cross again, alone, and start back up the North Fork. Out of stubborn insistence that my plan worked, I don’t start crying until well out of sight.

From Nine Stream, the trail climbs steeply, up nearly 3000’ in three miles, up to First Divide. Soon the grand old cedars recede into a subalpine carpet of flowers: bright red with columbine and orange with tiger lily and everywhere purple with lupine just past peak. And there are snowy peaks everywhere. I can’t stop smiling, or wishing that Krista were still here to see all of this. 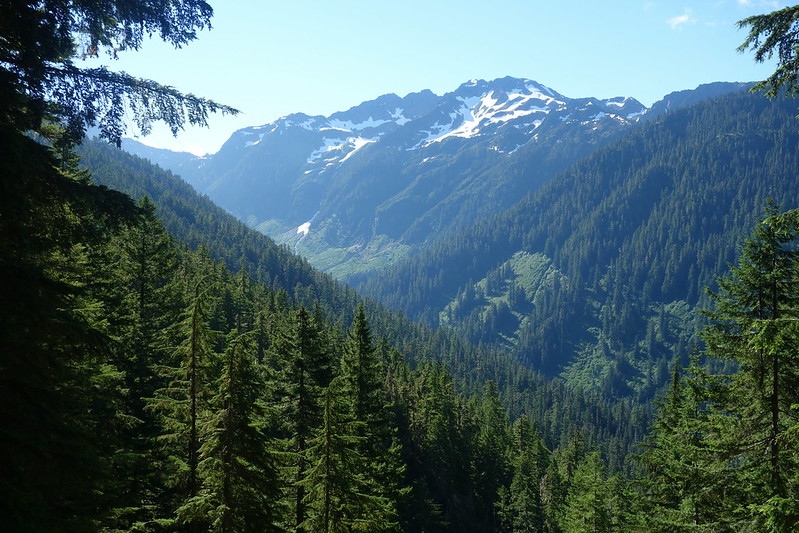 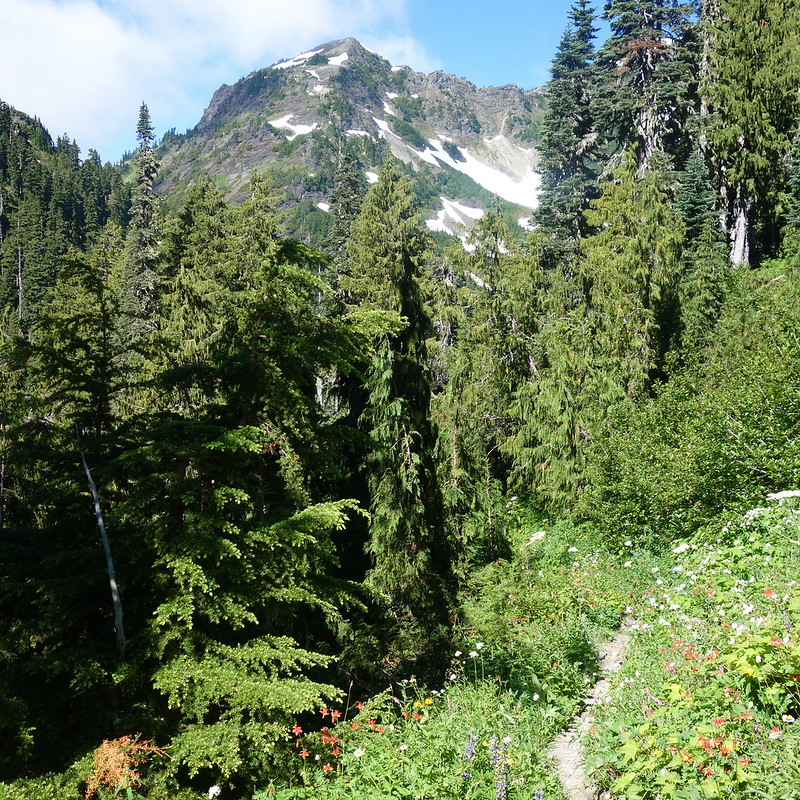 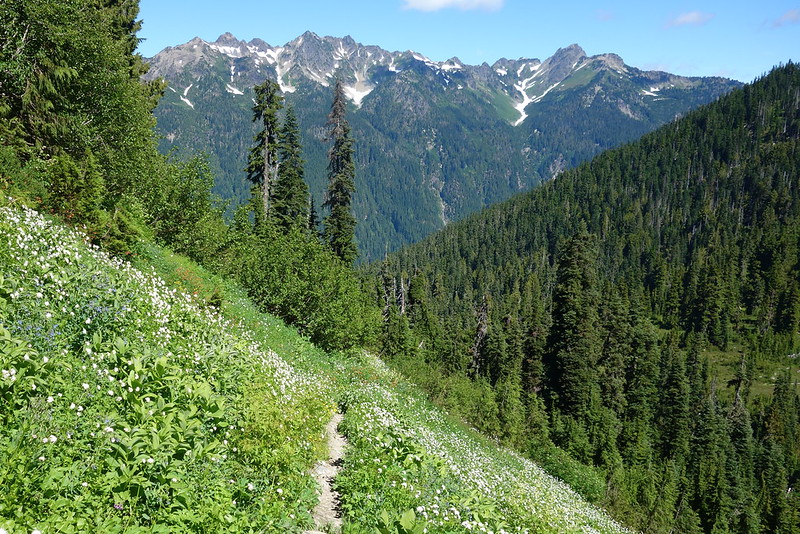 From First Divide, the trail switchbacks steeply again, but down now, 2000’ to the Duckabush. First past the vast meadlowlands around Home Sweet Home Creek and shelter, then back into deep stands of ancient Alaskan Cedar.

I meet an affable couple in the high meadows, but then it’s all thick silence but for distant bird songs and rushing water. I won’t see another person—or even see vague signs of another person—until late afternoon tomorrow.

I reach the Duckabush by mid-morning, and turn west on the Duckabush Trail, up toward what O’Neil called the “Grand Divide”—the central watershed that separates the Duckabush, Quinault, and Dosewallips drainages. Immediately, the trail disintegrates. I wade across Home Sweet Home Creek—now considerably closer to a river—then follow the trail as it climbs high above the Duckabush, alternating between stately stands of old growth and mud-soaked meadows, overgrown with devil’s club and nettle, which stings my shins as I brush by.

There are several swift crossing on the way to the Divide, including the Duckabush itself, which is only thigh deep, but rushing fast over boulders and blow down. I make my way carefully through, as a group of birds land on a nearby branch to watch. 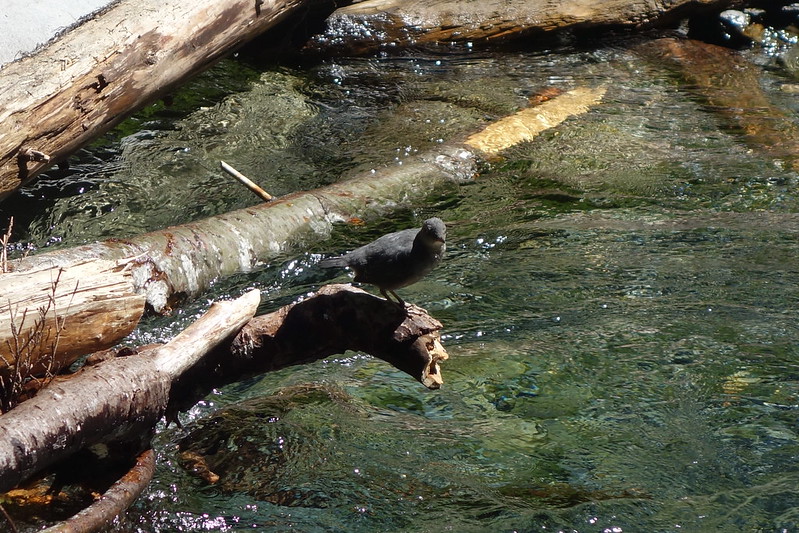 Past the crossing, the old growth fades again to meadow, and Mounts Steel and Duckabush emerge to the south, spires of winter watching over the spring. 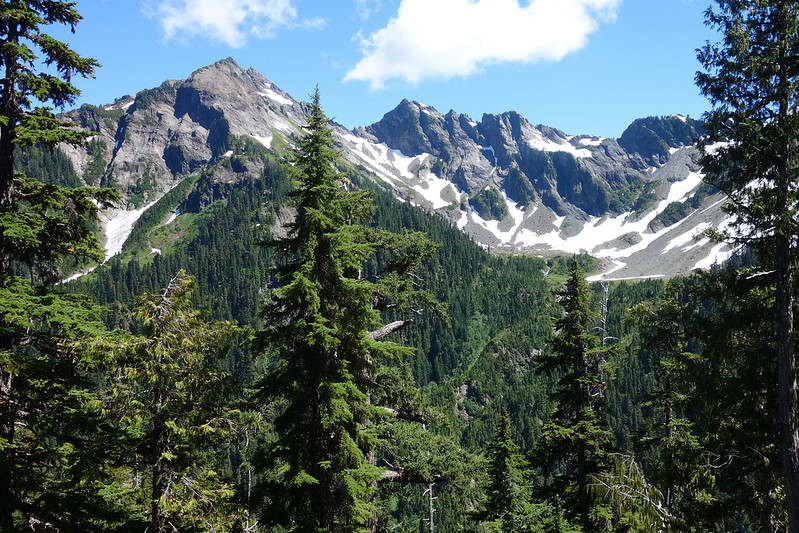 The meadows lead to a wide glacial basin, full of a tree-lined lake—Marmot—and streams that rush down to the Duckabush. The main trail switchbacks south here, up toward O’Neil Pass, but I leave the main route and cut north, through rolling, lightly wooded hills up into LaCrosse—once Lake of the Holy Cross—Basin. 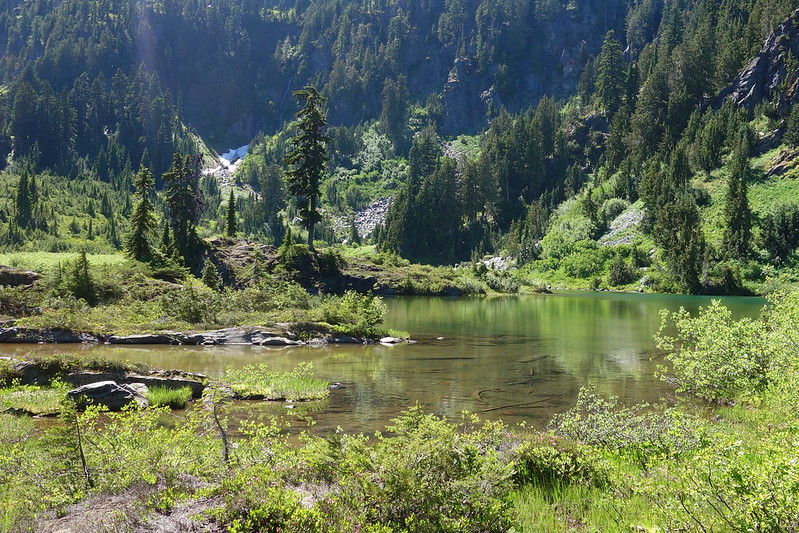 It’s the most wildly idyllic place I’ve ever seen: Heart Lake to the south, Lake LaCrosse in the north, and in between three miles of blooming green parkland, half a mile wide and everywhere bordered by rock and snow, piled straight up against a bright blue sky. I wish so badly for Krista to be here, and for my dad, and for everyone I’ve ever met. 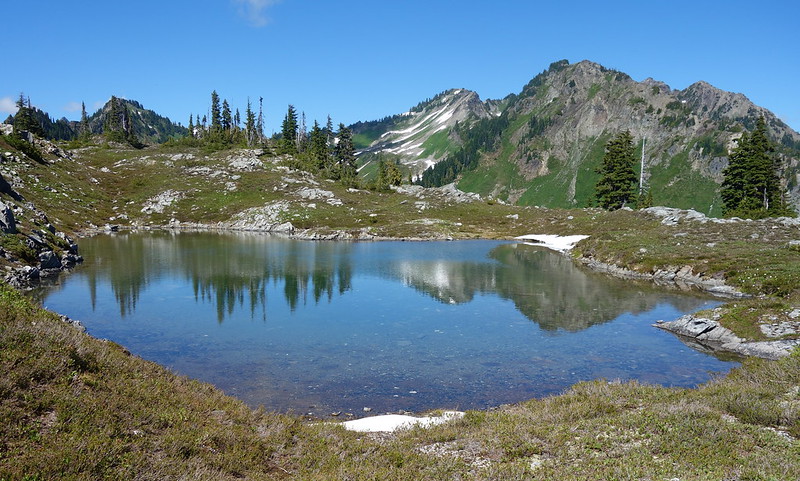 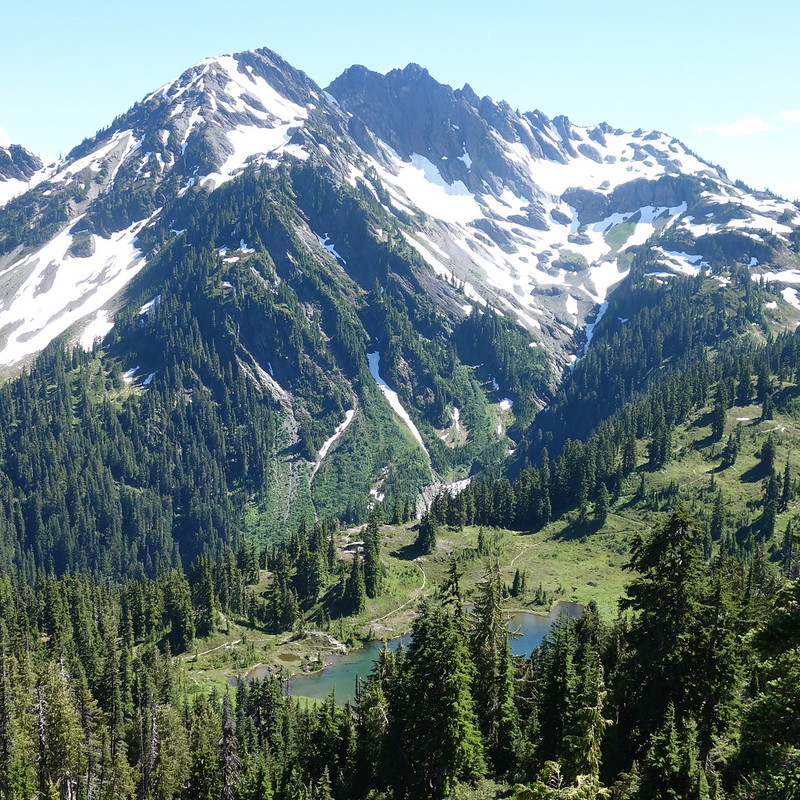 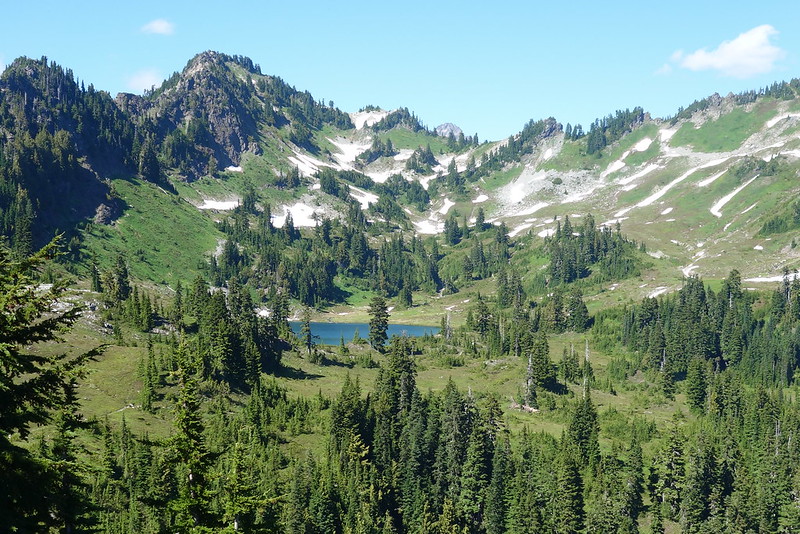 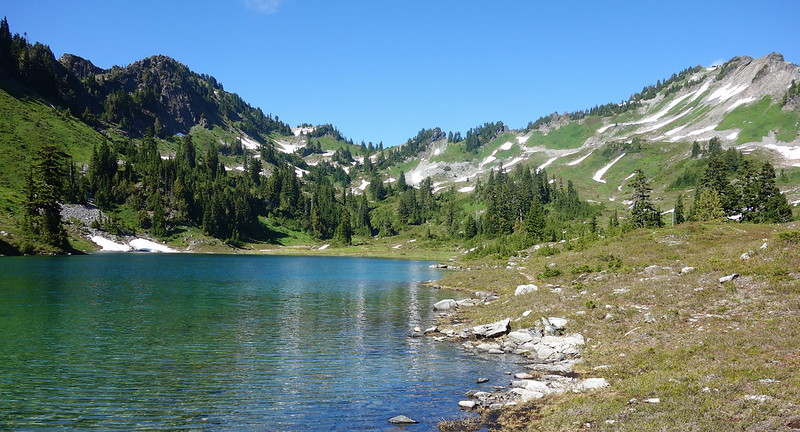 I eat a very late lunch on the northern shore of Lake LaCrosse, then find something of a way trail, and follow it up to the watershed ridge. It’s beautiful, and I keep looking back, with the now familiar ache of knowing I might never see a place again. 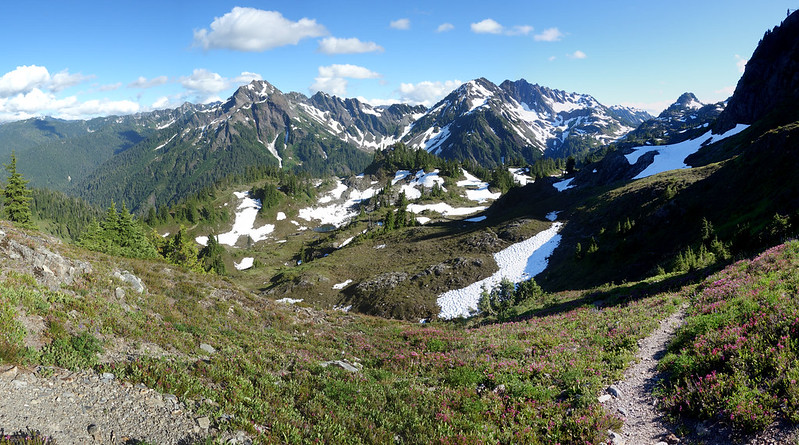 I pause again at the pass, and think of my dad. I think of the trips he took me on when I was a kid, when I whined and was just generally miserable company; how he kept taking me, kept cheerily waking up at four to cart an ungrateful kid up to the mountains.

It’s the strangest thing, being given a gift that you only fully appreciate twenty-five years later. People always used to say, “You’ll understand when you’re older,” when what they really meant was “I’m older than you and I think I understand better than you.” Like most things adults said, it was bullshit. But my dad never said that about hiking. He never told me that I’d appreciate it later, or even that I should appreciate it more in the moment. He just kept taking me, kept waking up at four to drive, kept staying out for sunset and getting up early for sunrise, kept rubbing his hands together in excitement at vistas and observing a two-hour cocktail hour before dinner.

Looking down at the basin below and the mountains beyond and the hills and valleys reaching out to the horizon, I think about this fragment of a memory I have from when I was 12 or 13, riding downtown with my parents to Saturday Market. Prairie Home Companion was on, and Garrison Keillor was saying something about time and heaven and his parents. He said that he hoped heaven existed, because he never had the chance to properly repay them. If he had all the time in the world, he never could have repaid them. And so he hoped that there was something, somewhere, that could.

The west side of the pass is just straight up terrifying: an eroded set of steep, braded paths over tangled blowdown and near sheer snowfields. Most of the time, the only handholds are roots or the trunks of stunted trees.

I stop for a break halfway down, and the rock I’m standing on gives way, sending me slipping into a knot of broken branches. I only tumble maybe five feet until I grab a root to stop myself, but I’m almost inoperatively scared and shaky afterward. By the time I make it back to something like a proper trail, my hands are visibly trembling, and I have to sit for a while to pull it together.

Far below I can just hear the East Fork Quinault rumbling down to Enchanted Valley. The sun’s just setting behind the Burke Range, turning Mount Anderson the most remarkable shade of blue. But I barely see any of it. I sit in the middle of the path for fifteen minutes, cross legged with my head in my hands, just focusing on breathing, until I feel vaguely normal again. 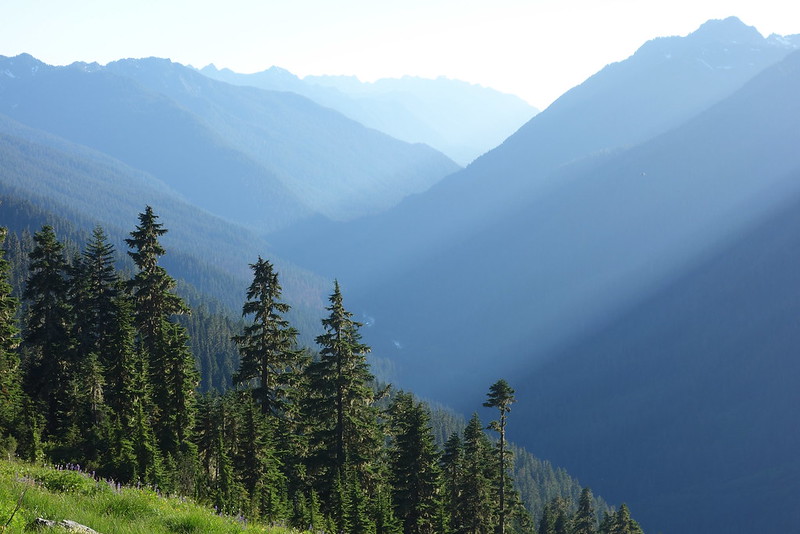 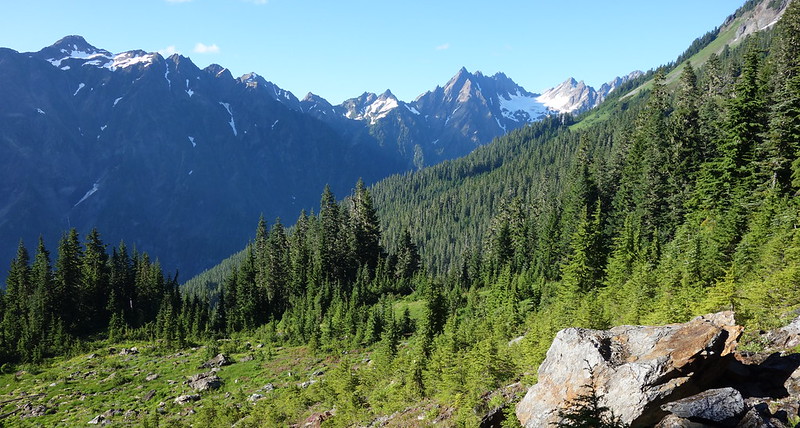 But then it’s most beautiful evening, walking through sunset meadows as the light slowly softens. There’s still steep snow here and there, but nothing like before, and the creeks and blooming flowers are so gorgeous, I forget all the trouble.

I’m rambling through an open, steep section of trail, humming tunelessly to myself, when I hear a sort of thunder to the left. My first thought is an avalanche, but that makes no sense: I’m on snow, and it’s not moving, and in any case there’s nowhere near enough of it to have a respectable avalanche. I look down, and it turns out to be an enormous herd of elk, not so much running away as slowly packing up, not so much scared as vaguely perturbed.

“We weren’t quite finished with dinner, sir.” 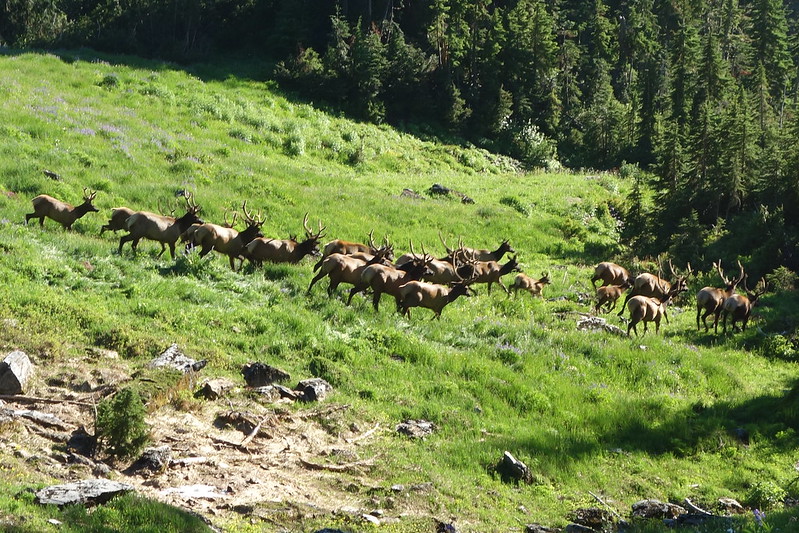 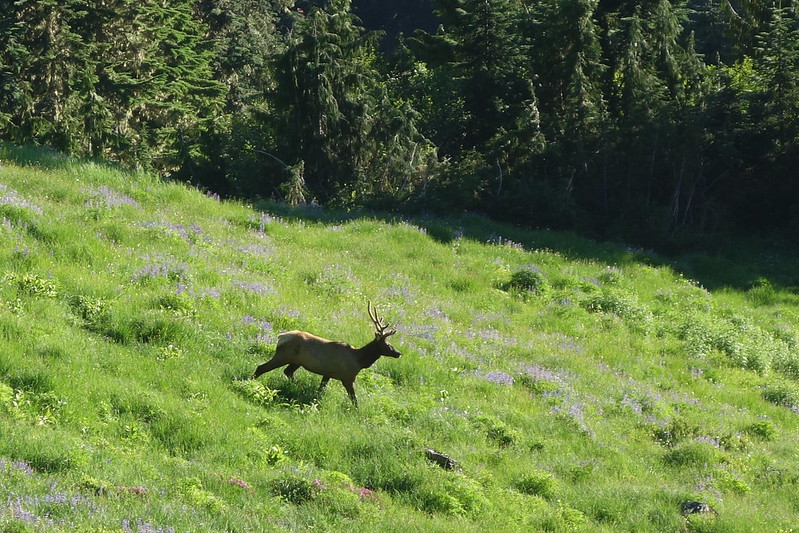 The light fades further as the path flits in and out of meadow and wood, sun and shadow. Mt. Anderson comes and goes, mostly comes, and soon grows to fill the whole horizon. 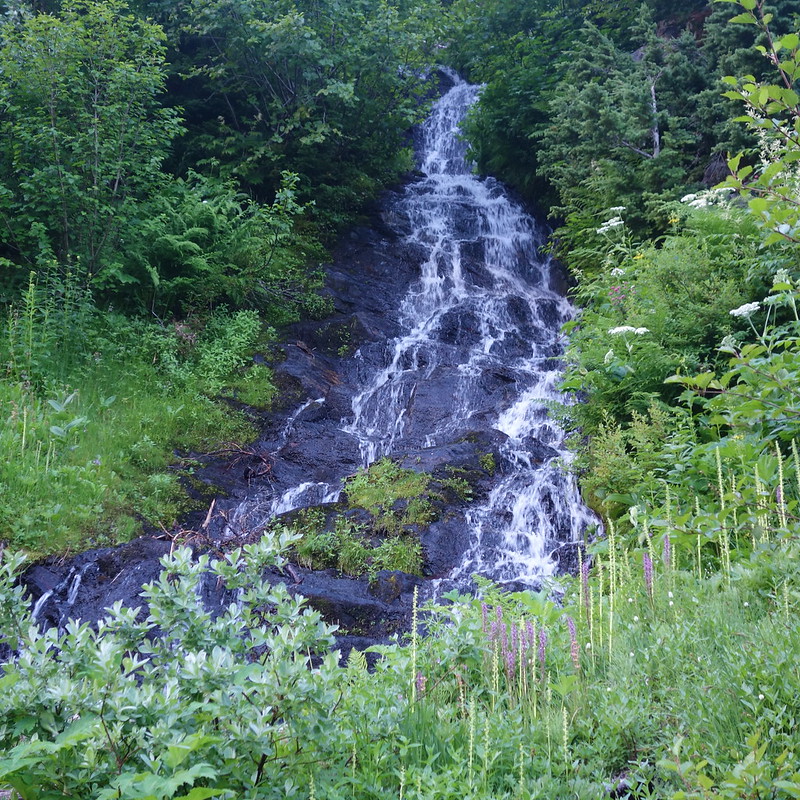 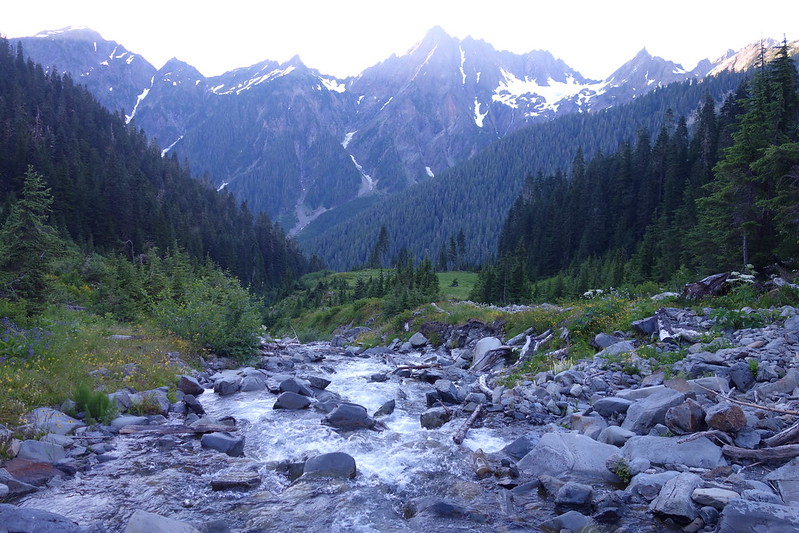 Just as the balance is tipping definitively to dark I reach White Creek Meadows, a blooming expanse of green where White Creek emerges from an overhung snowfield, and set up for the night in a small, cozy wooded clearing in the bottom corner, barely big enough for my tiny tent. 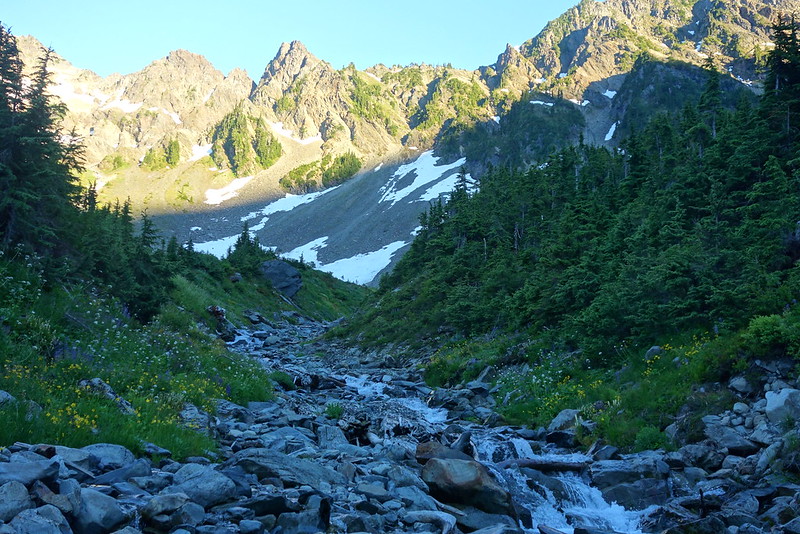 I eat at the edge of the meadow, watching water rush by. Staring upstream, I slowly notice three dark black shapes in the meadow above, maybe 200’ from camp. Bears! An adult and two children, grazing on grass or something, utterly unconcerned with me. I watch intently for fifteen minutes, much more interested in them than they are in me, until they saunter out of sight and the dark pushes me to bed.

I dream of meandering through these mountains, but I’m a kid again. My brother’s there too, and my dad. We’re three dark shapes, wandering the meadows at dusk.