I wake up in the indeterminate morning to a metallic sound just outside my tent. Huh? I scramble around, half awake, looking for my glasses, finally find them smartly stored inside my (very dirty) socks (!?), and look out. My deer friend’s back! And… it’s got the handle of one of my trekking poles in its mouth.

I flounder out of my tent to begin negotiations, but the deer runs instead, dragging my trekking pole along. Without thinking, I run after, first through some brambles, then into open, early morning meadow, still wet with dew.

I’ve been going for a minute or two when I realize that, right, I slept completely naked last night because of the heat. And, right, I’m still naked. Running across an open meadow. After a deer. In one of the most crowded corners of the park.

I wonder how this would look to an impartial observer. Would they see the deer first, put two-and-two together? Or would they just see me, naked but for untied shoes, running across the meadow? And what would they say? I imagine that father and his daughters from yesterday. I bet they’d be unfazed. “Nice day for it!” But what could I say back? “Yea, uh, sure is. You should try it some time?”

No time to rethink now, though, so I keep going, perilously close to a couple (occupied!) camps. Eventually the deer drops my trekking pole—was this all an elaborate ruse to pay me back for not sharing dinner last night?—and I retrieve it, then shamble back to camp with as much dignity as I can muster. (Read: very little.)

Not much chance of going back to sleep after that, so I pack up, eat breakfast, and head out early, first down the rest of Grand Valley, then up toward Obstruction Point. 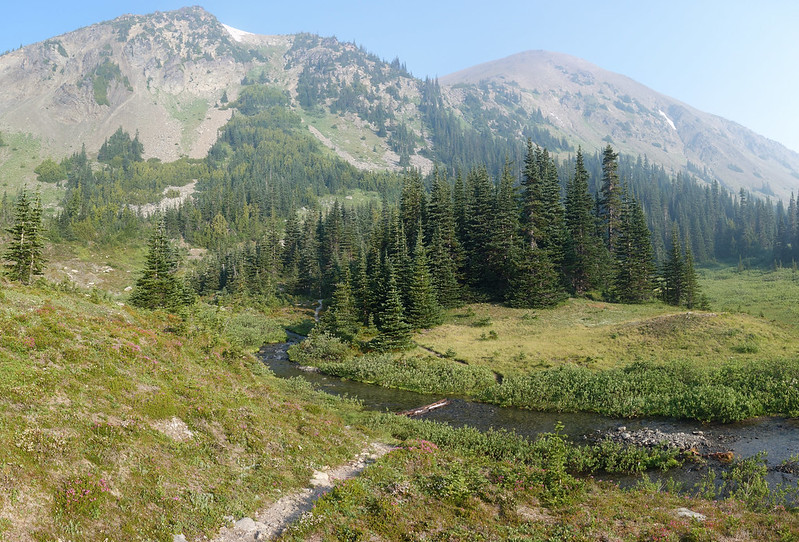 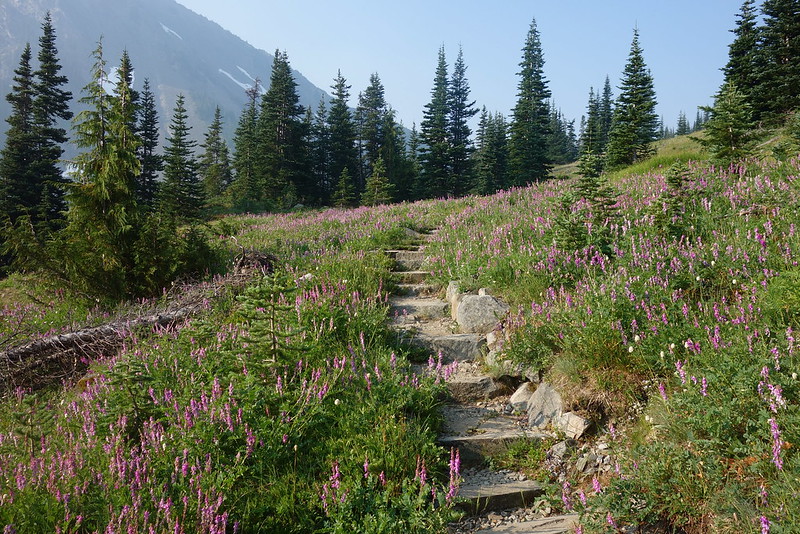 It’s early enough that the animals are still out, not yet replaced by people: marmots and a dozen more deer, all utterly unafraid and maybe just a little smug about their colleague’s Trekking Pole Triumph. 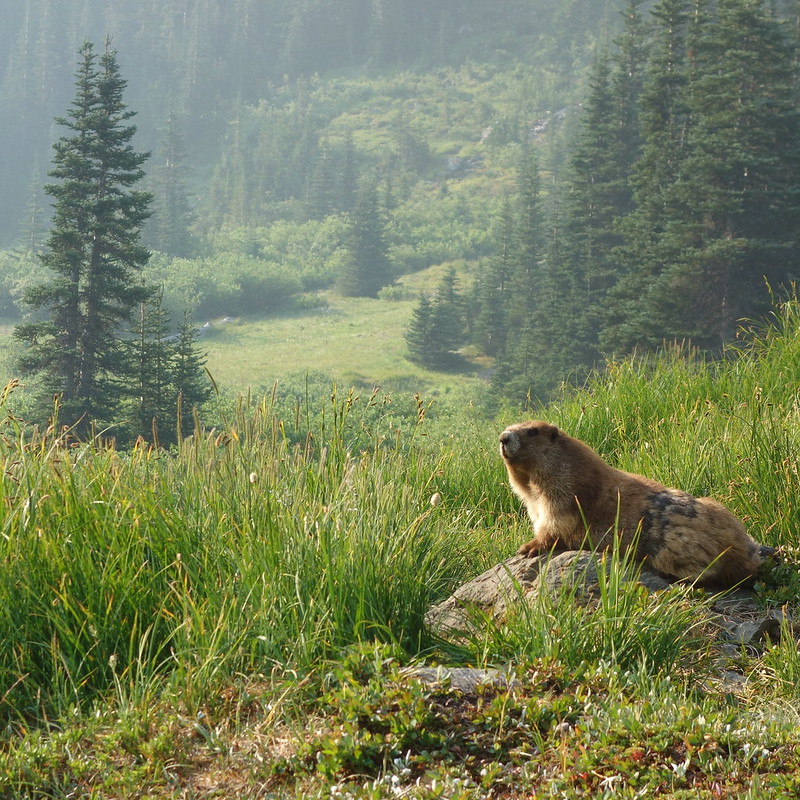 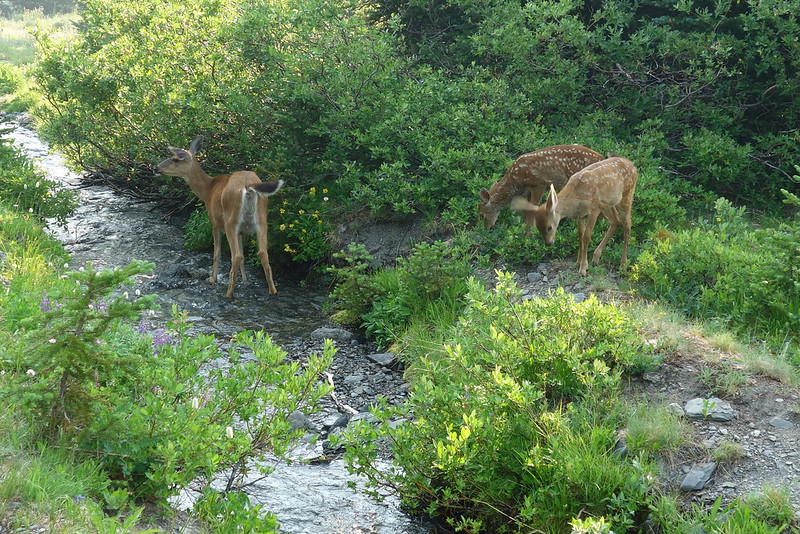 The first person I see all day is ranger, rambling down from Obstruction Point. He checks my permit, and I ask awkwardly about the smoke. “Ah, it’s been blowing in from the fires in Canada.” Canada! Not here! I’m obviously relieved, and he asks if that’s good news. “Yea, I thought that maybe one of the drainages here was on fire.” He nods his head sagely. “No, your route is still fine.” Then a short pause. “Apart from being very ambitious.” I smile. “But no new problems, then?” He smiles back. “Nope. Nothing new.” 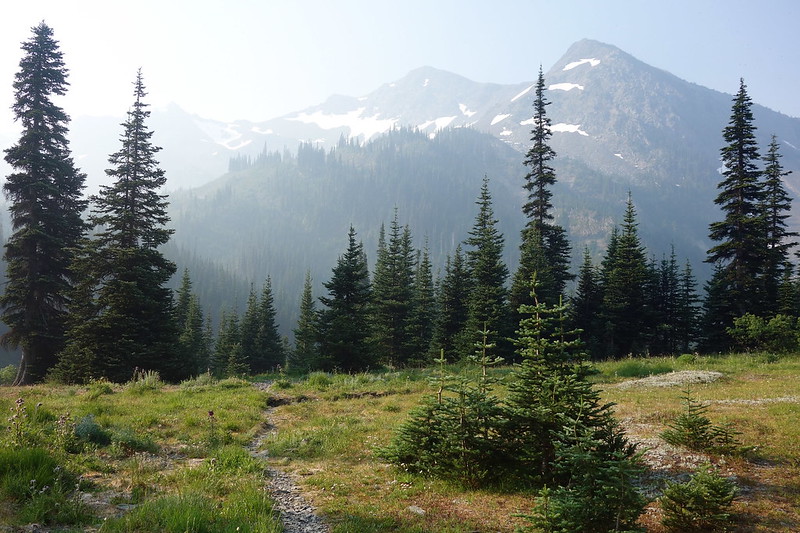 The climb up to Obstruction Point is neither terribly long nor terribly steep, but it drags a little as more smoke blows in, and I think about the last time I was here—actually, the only time I’ve been here before—with my dad, exactly fifteen years ago. 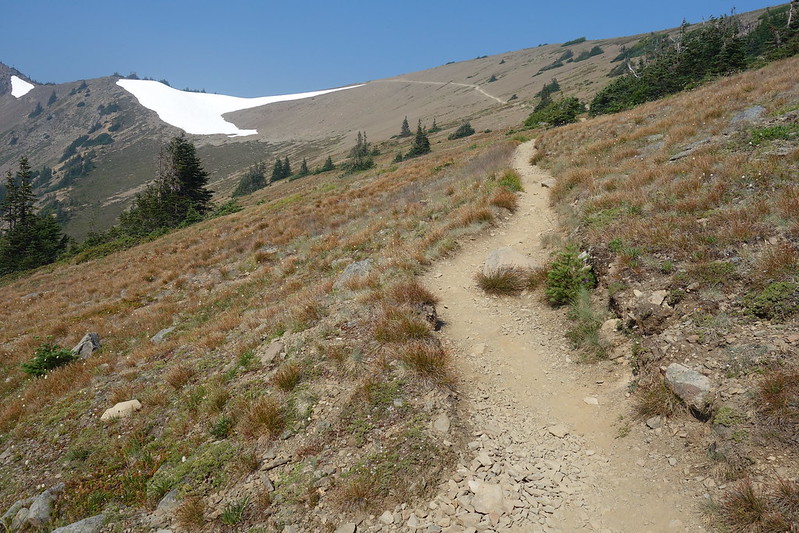 We spent most of my childhood backpacking: here, and in the Cascades. But I had to stop going when I was around 15. My kidneys had been bad my whole life, but now they were failing in earnest, and I didn’t quite have the zip to haul a backpack. All things considered, I was really lucky. My mom had a spare kidney she was willing to give me, and I didn’t have to stay sick for long. But I had to be sick for a little, and I was sick enough to lose a few things.

Getting well, after my transplant, I started to take these walks around town. A couple of my medications conspired to make me nervous and fidgety and unable to sleep, so I’d wander around the neighborhood at night. At first, I could only walk a mile or two, but even that felt like an impossible luxury.

I remember the very first one I took. It was late November, and the trees were just going from autumn gold to winter grey. Light rain and wind blew. It felt like I was watching the seasons shift, like I’d walked into a world that was always-already moving, a world that had been slowly stirring forward the whole time I was gone. I brought my portable CD player, and sang along to REM. Passing the stop sign at the end of our street, I started to cry, I think for the first time in my life, out of happiness.

Illness has its own, peculiar phenomenology. The difficulty it imposes on even routine tasks—walking to school, getting up for a glass of water—seems to force a turn inward, to a stilted stillness, and engender a particular way of being—or, really: of not being—in the world. It takes you away from the world, and the world away from you.

I didn’t have the language for it then, but walking through the barely wet twilight streets, through gently drifting autumn leaves, felt like a direct repudiation of what it felt like to be sick. It felt like a return to the world of motion and circulation, buzzing and bigger than me, finally here after years away. If being sick was lying in bed, barely able to muster the energy to listen to music, then this—singing along, walking through the wind and rain—was being well.

That hike here fifteen years ago was the first backpacking trip I went on after getting better. I was far from fast, and unready even to carry the tiny bit of weight my dad had saved for me—basically just a sleeping bag and pad. And I’m not sure that I’d yet connected walking out here to the majesty of those first autumn walks around the neighborhood. But I do remember the frogs, thousands of them along the shore of every pond, jumping and swimming in the sunset, to and from everywhere all at once, in a bursting, happy confusion. And the birds, swooping down from the hills. The world at play. And I remember walking back up this hill the next morning, singing that same REM song to myself.

After the climb, the trail follows Grand and Hurricane Ridges in a surreal saunter through snow and grass that sways in the gentle, smoky wind. I imagine this is what tundra feels like. 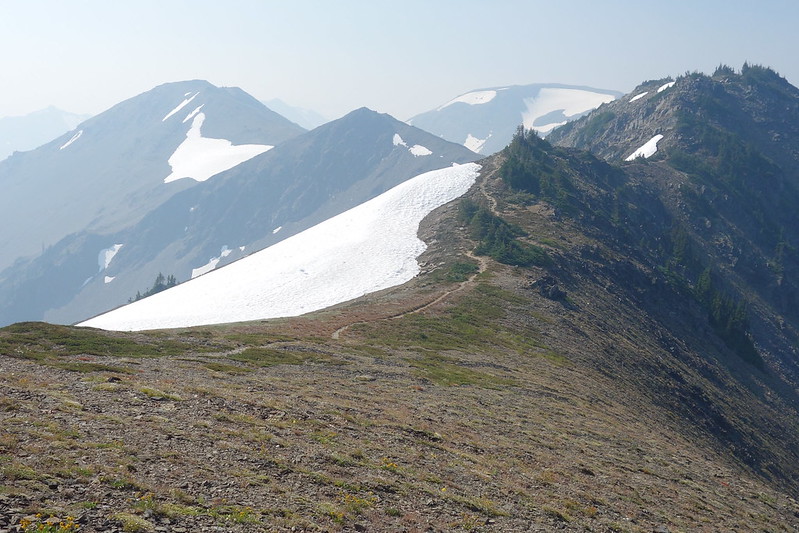 Closer to Obstruction Point, dayhikers start streaming in. The usual conversations: Where are you coming from? How’s your trip? What the hell is that smell?

And then the road. I’ve got a lot of dry roadwalking today: maybe eight miles, from here to the Hurricane Ridge Visitor Center, where I’ll pick up the Mt. Angeles Trail. But it’s really not so bad. The grade is even and easy. Nearly every car headed my way pauses to ask if I want a ride, but for some reason that seems silly in retrospect—something about wanting a continuous footpath—I always decline. 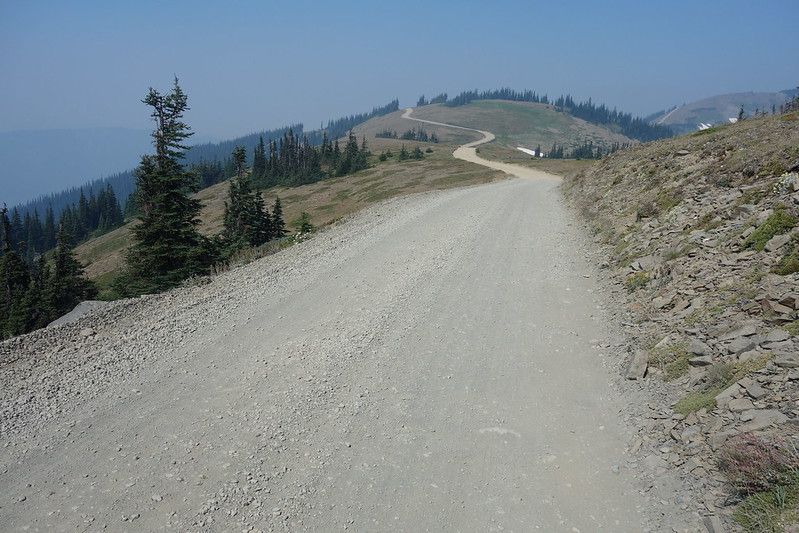 As morning turns to afternoon, the day gets hot. Nearly 90. And the smoke’s just getting worse. I’m on the edge of accepting one of those rides when finally the Visitor Center comes into view: an improbably welcoming wooden box, and an improbably large parking lot, full of rented cars.

Inside, it’s all international tourists and languages I don’t understand. I buy a ridiculously large Dr. Pepper (free refills!) and sit for a while in the air conditioning, looking at a wall-sized picture of the mountains I just walked through.

After a liter and a half, I shamble outside, find some shade, and eat my usual lunch: sausage and a tortilla, the latter now considerably worse for five days of wear.

A woman in her late 70s approaches, looks down at me, and asks, almost accusingly: “You hiking?” I tell her, in an apologetic tone that seems to surprise us both, that I am. She points down at my map. “Well, let’s see what you did, then.”

I take her through the route, worrying the whole time that I’m being boring, but she just nods. And she keeps nodding when I’m done. “My husband and I, we did almost the same thing, 30 years ago.” I ask her to show me. It’s not the same thing, exactly: up the Dosewallips, over Hayden Pass, and out the Elwha. But it’s close, and we talk for a while about the trails.

She sounds wistful. “It was real wilderness back then.” And she keeps referring to her husband in past tense: he loved this place, and tried to make her love it too; he thought they’d be much faster than they were; he didn’t bring enough food—the bastard never brought enough food—but he did take her out to a fancy dinner in Port Angeles when they were done; he made her love this place after all.

I’m trying to find a kind way to ask what happened to him, when a man about her age comes doddering up on a walker, precariously balancing a large soda. My new friend calls him over. “This one”—she points at me conspiratorially—“is hiking!” He looks at me appraisingly. “Is that right?” Then he sees my map, and asks me, in an almost exact echo of his wife a few minutes ago, to show him. I do, a little faster this time, and he tells me that the two of them took the same trip, “Oh, what is it now? 20 years?” The woman corrects him: “30. And I was just telling this young man how you nearly starved us to death.” He waves it away like a bad smell. “Ahh, we always had enough to eat.”

From the Visitor Center, I follow the Mt. Angeles Trail north, steeply up and down Sunrise Ridge, then around Mt. Angeles to Victor Pass. 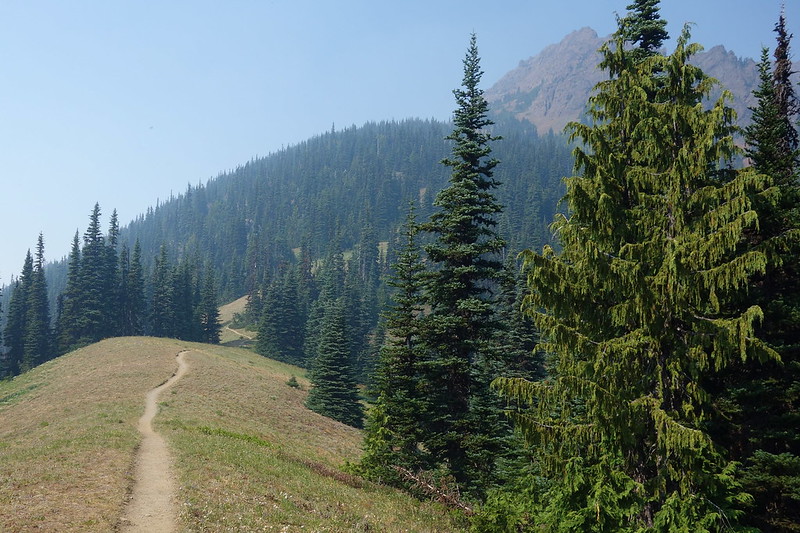 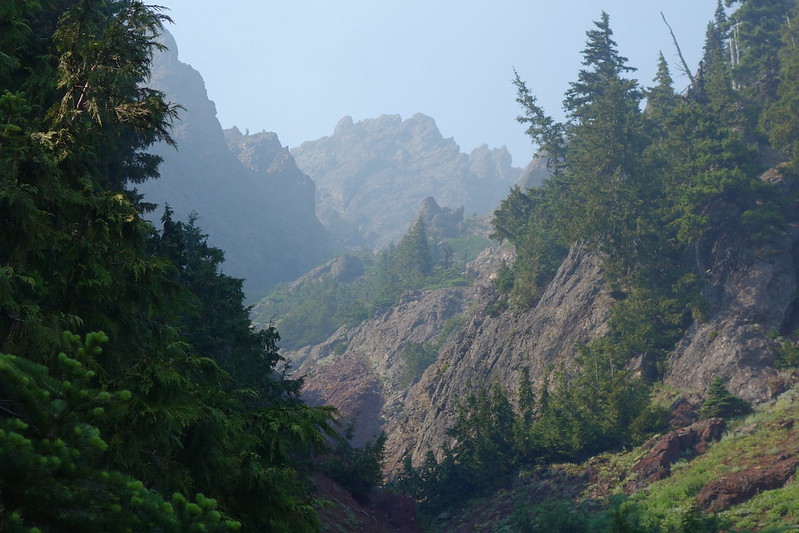 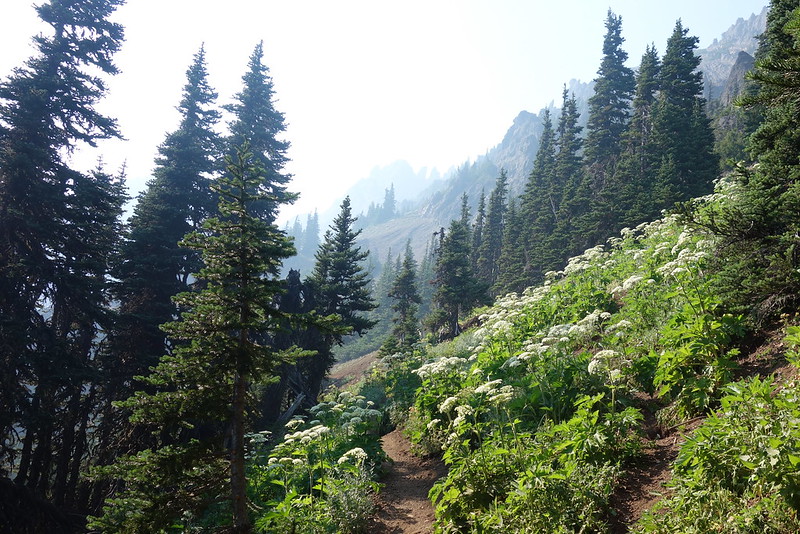 The crowds disappear in the first half mile, and I’m in wilderness again. There are goats on the rocky crags above, and friendlier fellas closer at hand. 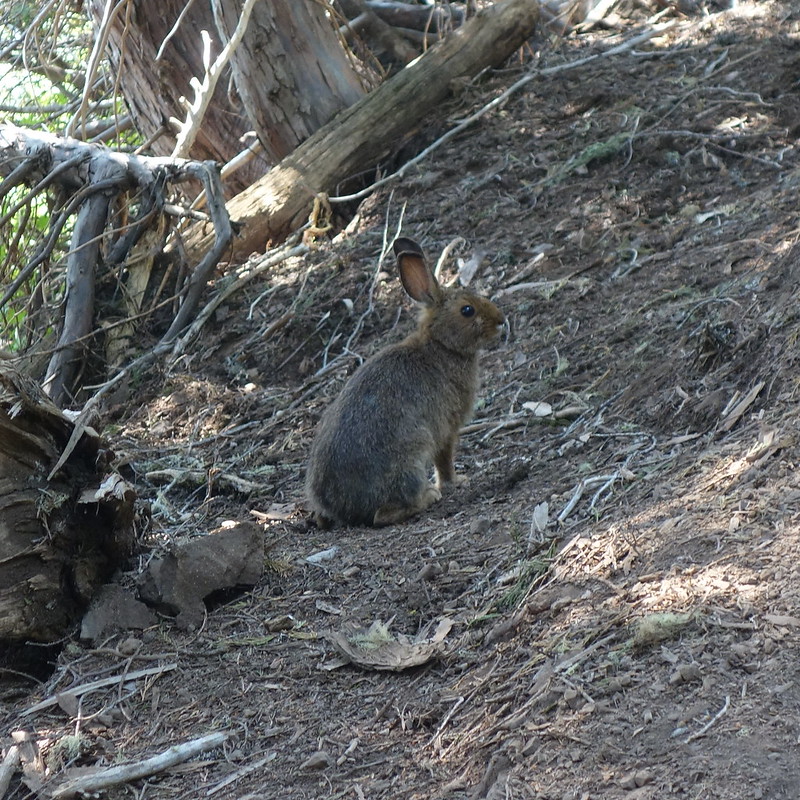 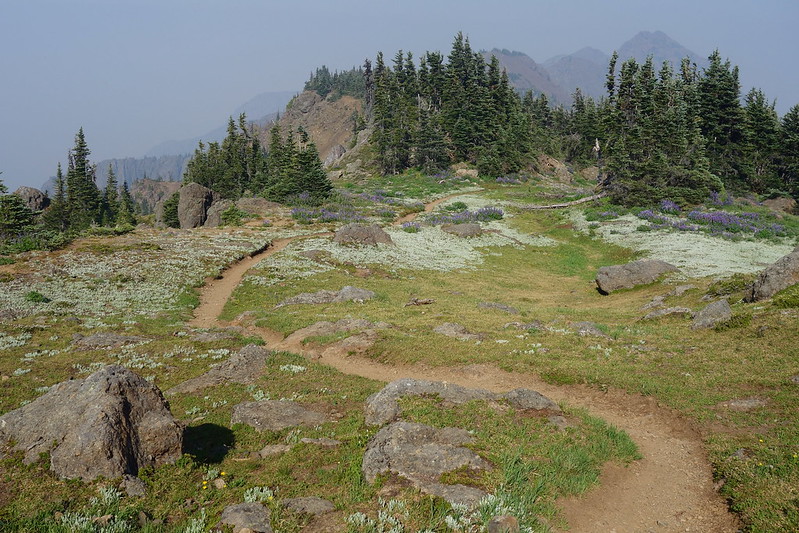 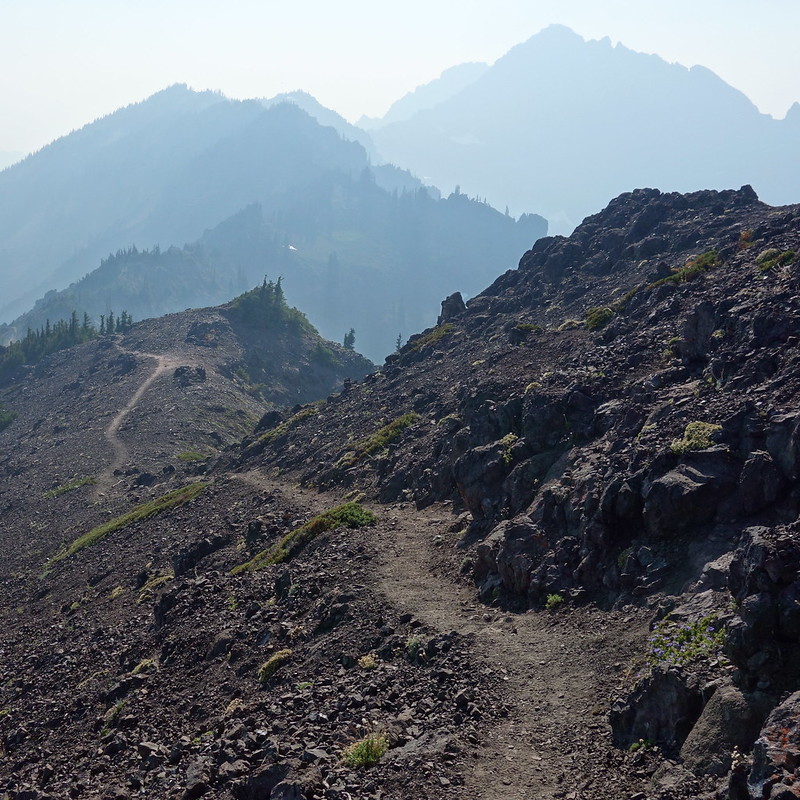 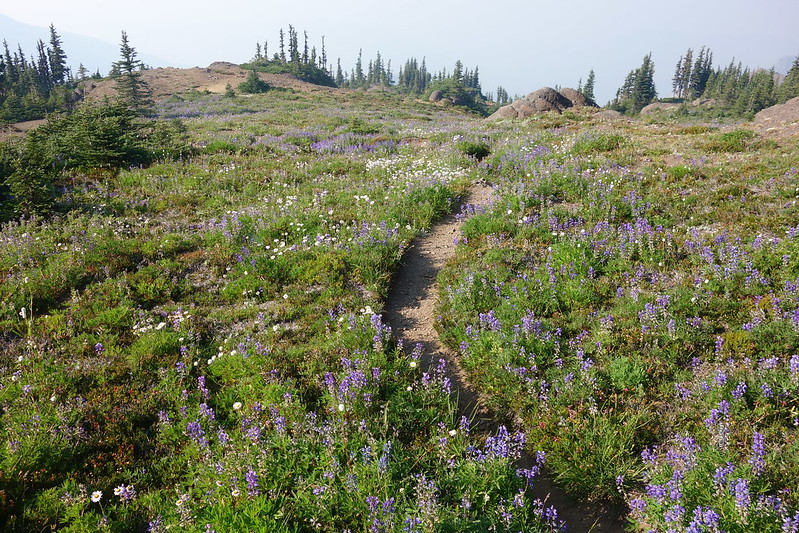 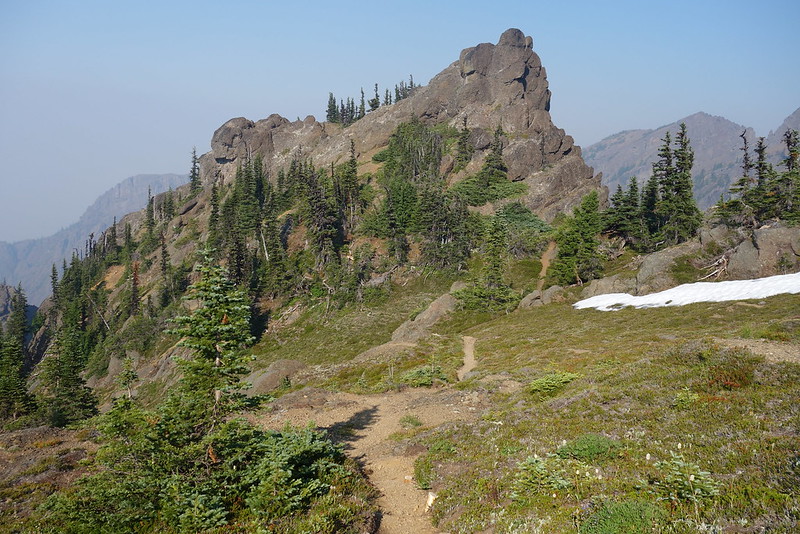 The trail disintegrates a bit on the way down to Lake Angeles, becoming more a braided and frayed set of paths than a proper trail. But after only a little confusion (and more than a little butt scooting), I make it down. 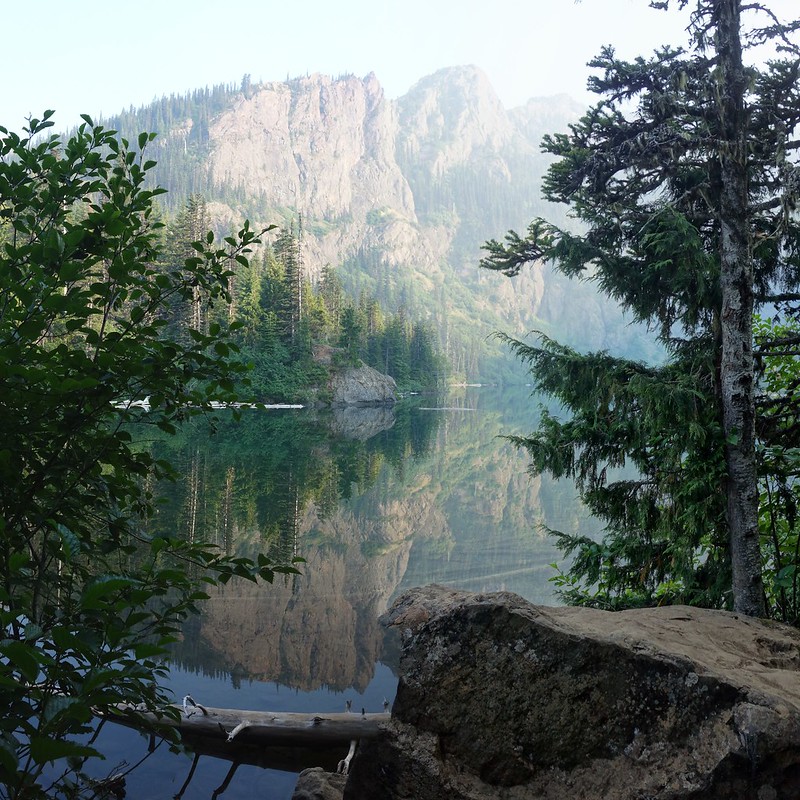 There’s a massive series of obviously well-used campsites, but the whole place is empty and I have my pick. I set up in a luxurious space that could easily accommodate six more tents, then strip and jump into the water.

It feels like paradise after such a hot, dusty day. I scrub off the thick layer of dust and sweat that’s gathered on my legs, then swim out to a tiny island in the center of the lake. The sun’s just beginning to set behind Klahhane Ridge, and the day’s heat is just beginning to fade. All of the usual birds flock down from the cliffs and trees in turn. Then bats, swirling in the evening air. I swim back to camp and watch this wonderful world in motion until it’s too dark to see. 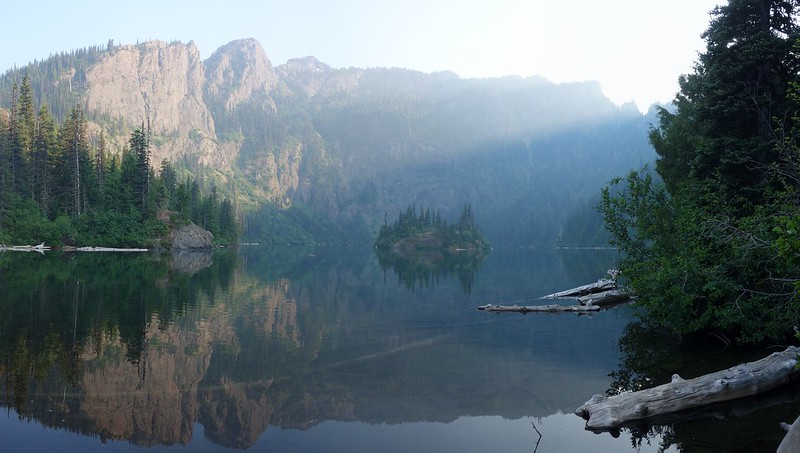