At dawn, I wake to a family of deer just outside my tent. I didn’t notice last night, but there’s a thin tunnel of broken branches above camp, which I guess must be their trail, and they’re sluggishly brushing through on the way to the creek. I nod in what I hope is a neighborly fashion, and fall back asleep.

My trail’s easy this morning: a set of rolling curves through the broad shaded valley between Cameron Ridge and Thousand Acre Meadows. Ancient stands of silver fur slope into shining fields of flowers, waist high and wild, tangled towers of columbine and lily. 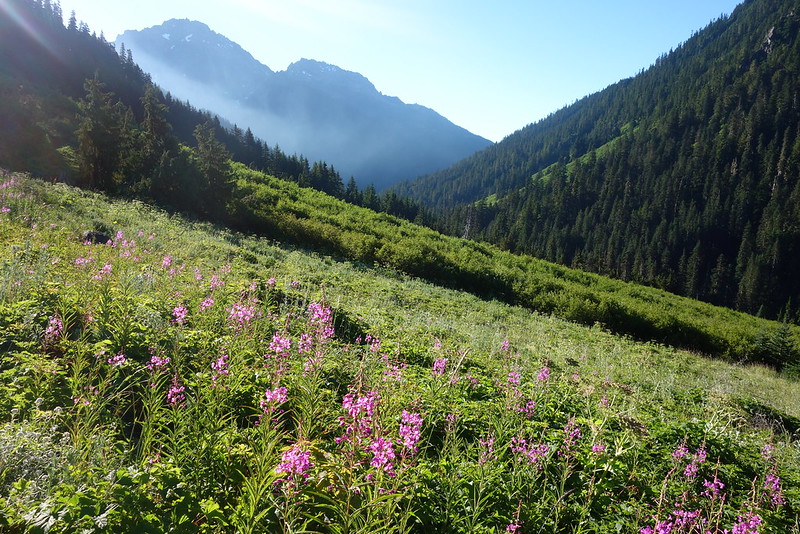 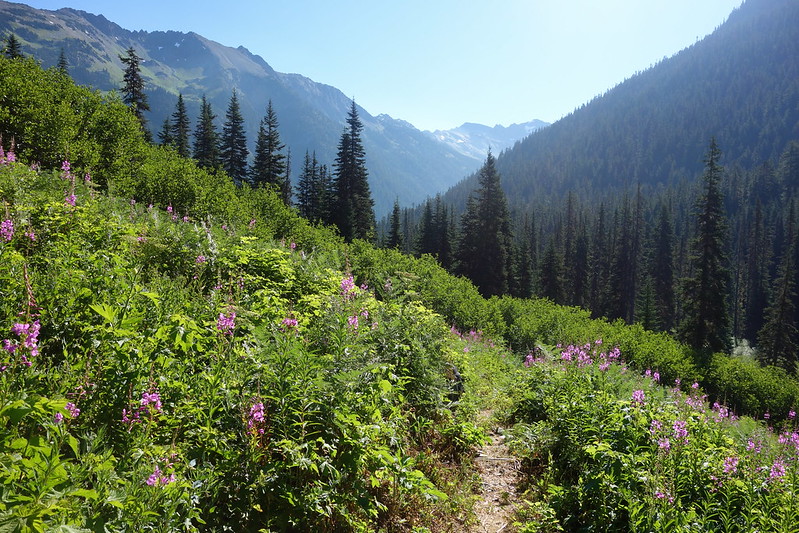 I stop for breakfast at the old Bear Camp shelter: oatmeal in the shade, then coffee in the sun, on a foot-smoothed log across Butler Creek, staring back at the deep green meadows below Mt. Deception. 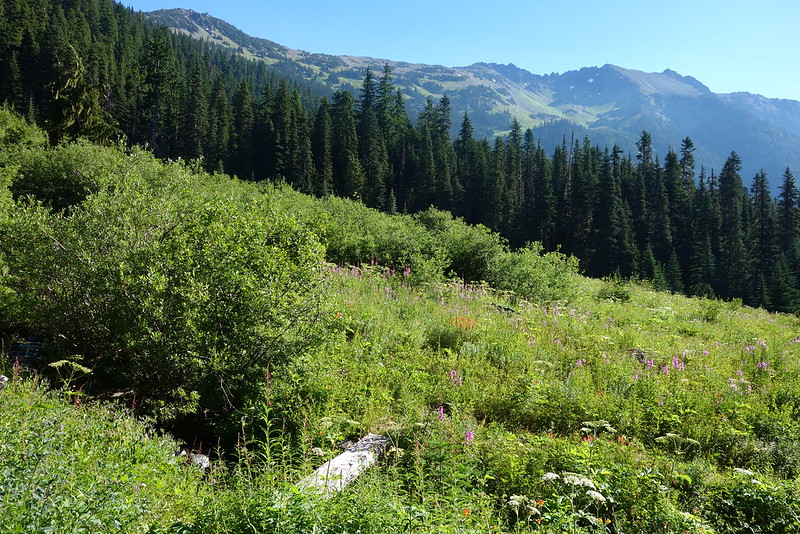 Then… The Climb. Or: Climbs.

The Lost Pass Trail leaves the Dosewallips at an overgrown intersection in the northeast corner of Dose Meadows. The National Park calls this a “Primitive Trail,” which I quickly realize means that it’s actually a creek. Or, more charitably: a series of creeks, connected by braided deer paths.

The going’s actually sort of fun though. The “trail” switches back steeply through thin forest and sandstone outcrops, studded with purple-red penstemon. And it’s short: just under a mile to Lost Pass, where everything changes. I’m climbing over crumbling rock, then suddenly I’m in the middle of endless, overflowing fields of flowers, all full of snowgrass and too much else to even begin naming. 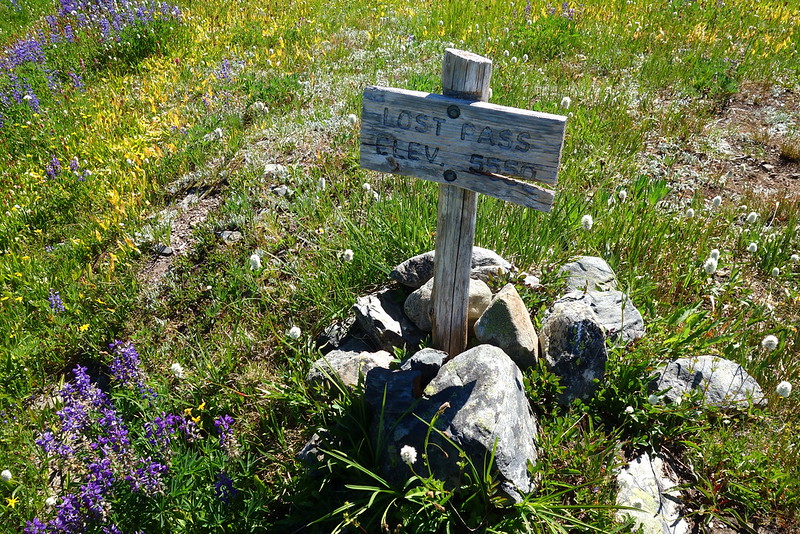 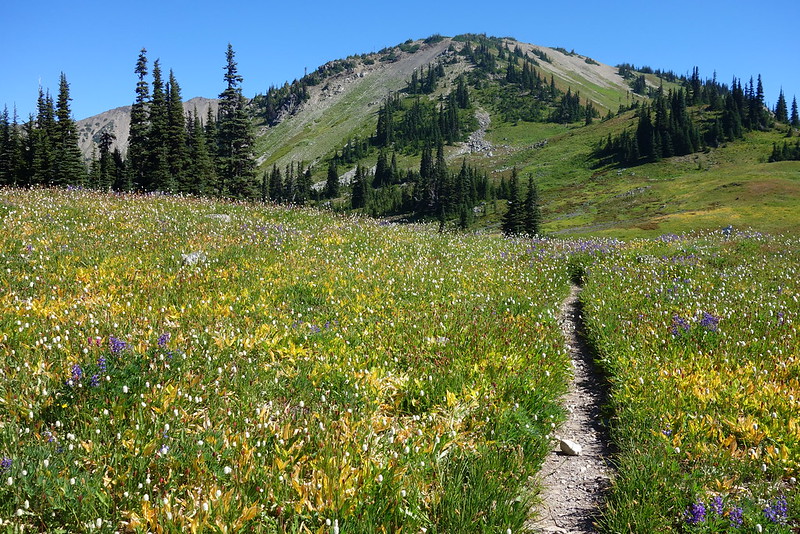 To the west is the Lost River’s trailless canyon, surrounded on all sides by snowy, jagged peaks. Olympus and the Bailey Range loom further, marking the middle point between here and the sea. 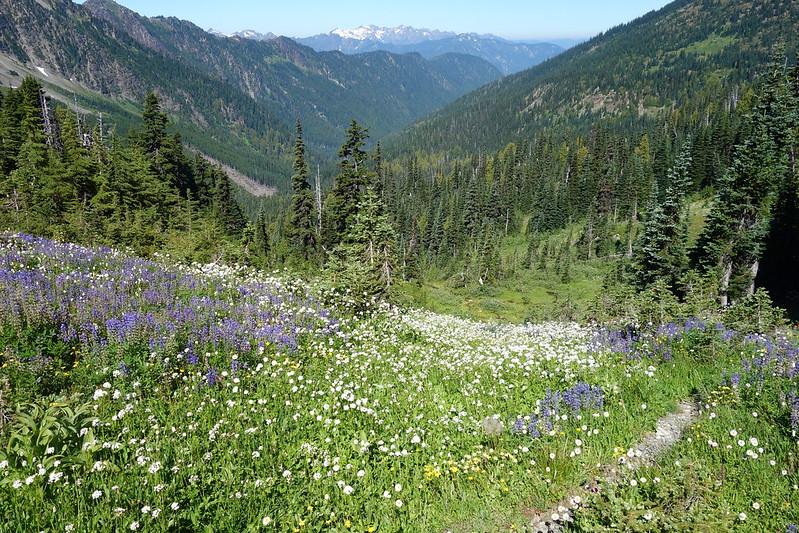 It’s maybe the most beautiful place I’ve ever seen. 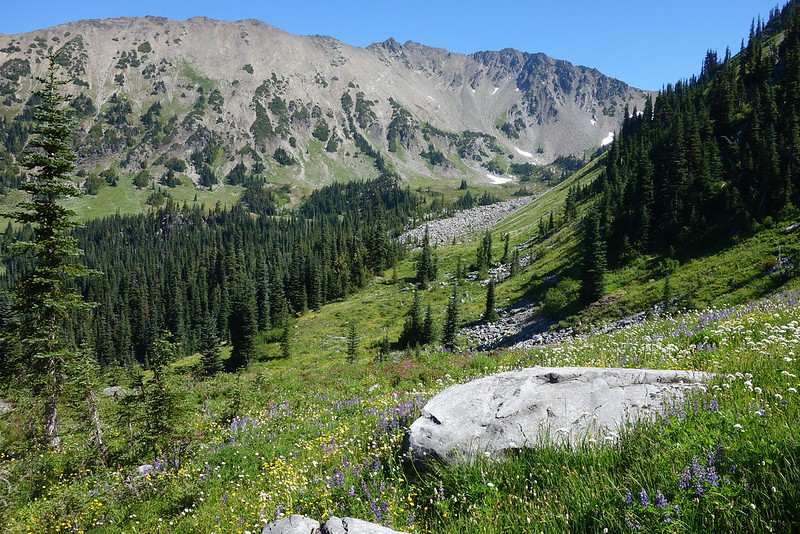 I stop at Three Sons Camp for a Snickers, and to take a quick bath in Deet. There’s a rockslide here, running all the way from Lost Peak, and two creeks, which babble companionably on either side.

I wish I could just camp here, and spend the night exploring the basin. But there are miles to make. It makes me think again about something I often think about out here: how this constant moving forward means that I’m always only ever passing through; how so much has to be seen only for an instant, then left behind; how maybe the price of seeing the world is never fully stopping to be at home in it.

From Three Sons, the trail climbs toward Cameron Pass, and the blooming meadows are slowly replaced by barren rock, which seems to stretch to the horizon. 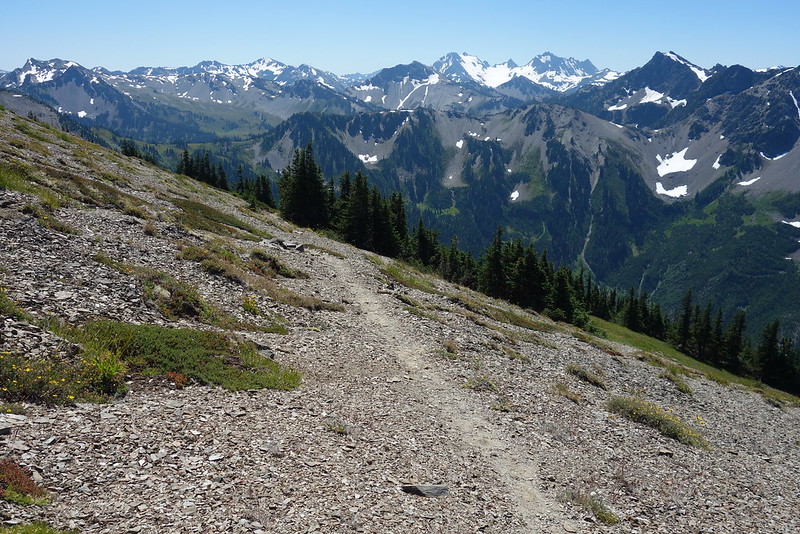 At the pass, I meet the first people I’ve seen all day: a father and two twenty-something daughters, dipping tortillas in a bucket of peanut butter, out on a mountaineering trip I can’t quite comprehend: over this ridge, then across that, then finally, somehow, down to the ocean.

Also, they’re wearing crampons. Although I haven’t seen meaningful snow since Anderson Glacier, here the north side is completely covered with a steep, slick sheet.

The dad smiles like they’ve all just been waiting for me, and in a thick, rural accent, offers help. “So, do you have crampons on you?” I don’t. He doesn’t pause. “So what we might want to do”—apparently I’m now part of this “we”—“is go down together.” He smiles, and I instantly fall in love with all of them. “You can borrow a pair of crampons, and I’ll walk them back up when you’re down to dirt.”

It takes me a second to even realize what he’s saying. One of the women mistakes my surprise for hesitation: “I’d come too!” She smiles in a way that seems to spread to her whole body, then tilts her head to the right and dips the last of her tortilla.

I start to tear up for I don’t know exactly why, and look down to pull myself together. As I look down, I remember, as though I’m there again, the beginning of college, reading Rousseau’s Discourses for the first time. I’d just broken up with my highschool girlfriend, and the book nearly brought me to tears: it seems obvious now, but I’d never thought that maybe caring deeply for each other is just some baseline fact about being human—that maybe caring isn’t some rare, fine achievement, but a basic condition, only made rare by a world that gets it wrong.

And in the same moment, I remember a few years later, my first year of grad school, reading his Essay on the Origin of Language, and feeling exactly the same way, this time about something he says about words: that, before language, we sang to each other, just because that’s what creatures like us do, if left free to be what we are; and that words only came later, as echoes of the meaningless melodies they eventually replaced.

And I remember going to the grocery store with my mom as a kid, thinking that maybe the gruff faces of adults there could be washed off, like dirt or stubborn oil, and that underneath, there must be childish smiles.

And, finally, after what I’m sure is an outlandishly long time, I remember the fact that there are three people in front of me waiting for an answer. I look up and try to sound casual, which never, ever works for me.

The old man’s smile doesn’t break. “Good man! I think you can too.” He pauses to think. “The best thing would be to cut east, then make your way down that rock face.” He points. “After that, should be smooth going.”

I thank them all profusely, but I worry not profusely enough, and feel myself touching my heart. As I walk off east, one of the women yells after me. “Hey, what’s your name?” I tell her, but fumblingly forget to ask any of theirs. Undeterred, she yells back: “Have a great trip Robin! It was good to meet you!”

The pass, it turns out, isn’t actually so bad: it’s all snow and washed-out switchbacks, but I pick my way down carefully, mostly on my butt, doing a slow-motion glissade over scree.

I lose track of time—it feels like hours, when it’s only been minutes—but eventually the grade mellows, and I follow an eroded but stable trail down, into Upper Cameron Basin. 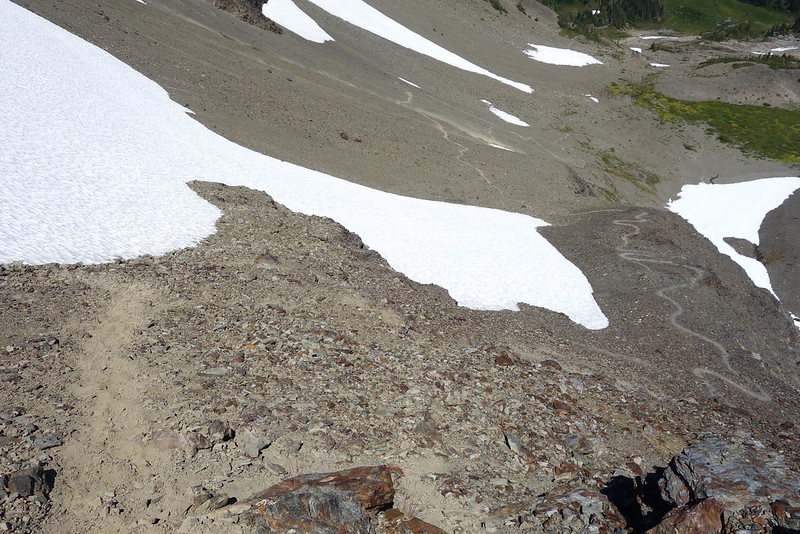 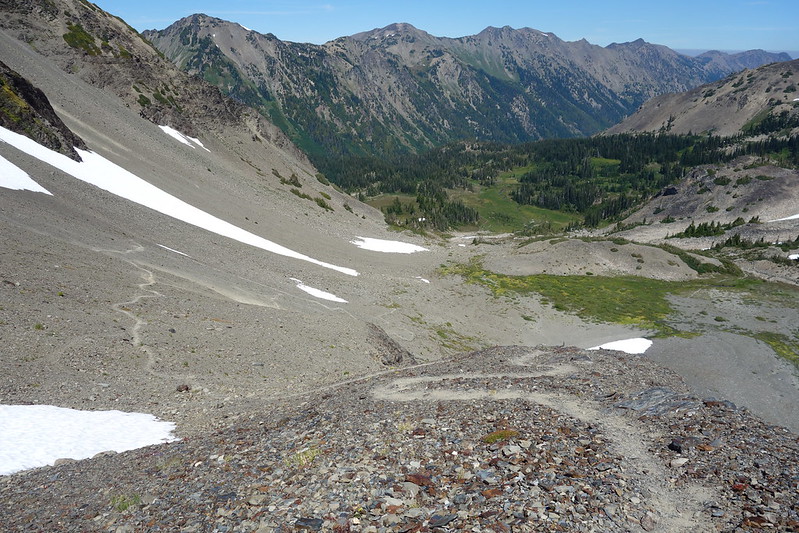 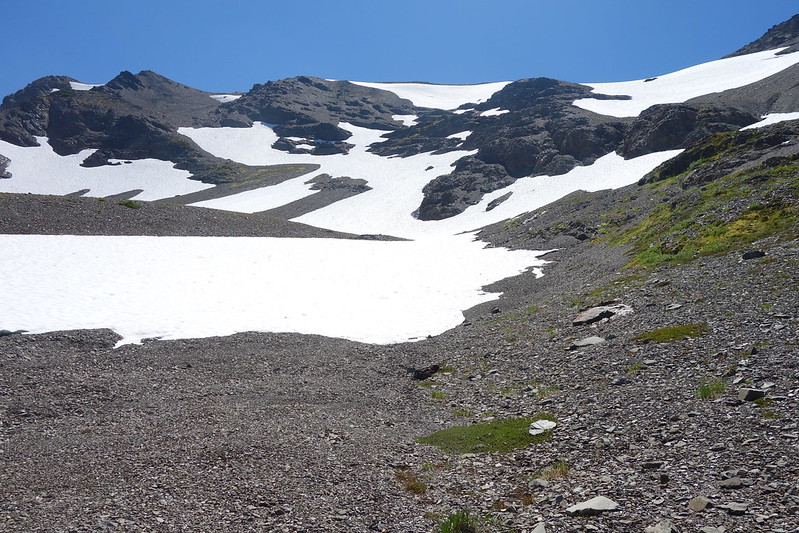 Upper Cameron Basin is another green world: a long glacial cirque, cut by dozens of small creeks that draw steep channels through snow-smoothed silt and shallow grass. It feels as though the landscape here is just being made now, for the first time.

The trail fades in and out among the new spring growth, but becomes more pronounced as it leaves the scree for a gradual slope down, first into subalpine meadows full of lupine and snowgrass, then into a thick forest of slide alder, salmonberry, and cedar. 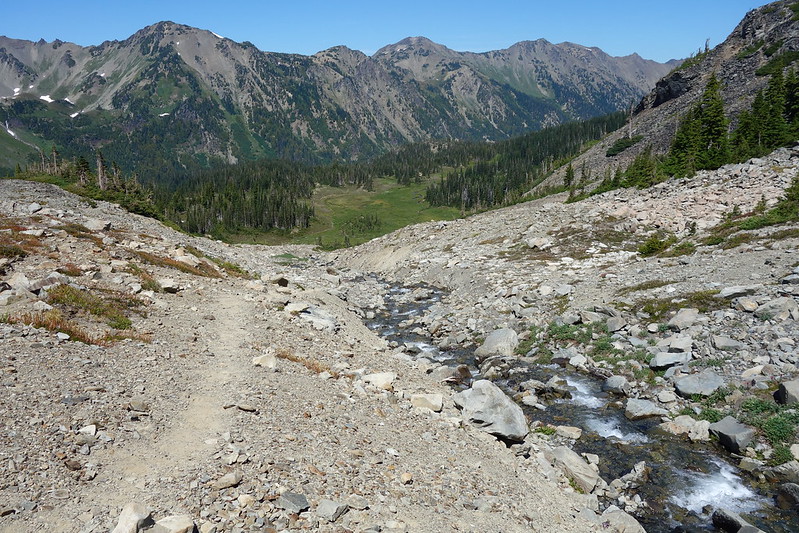 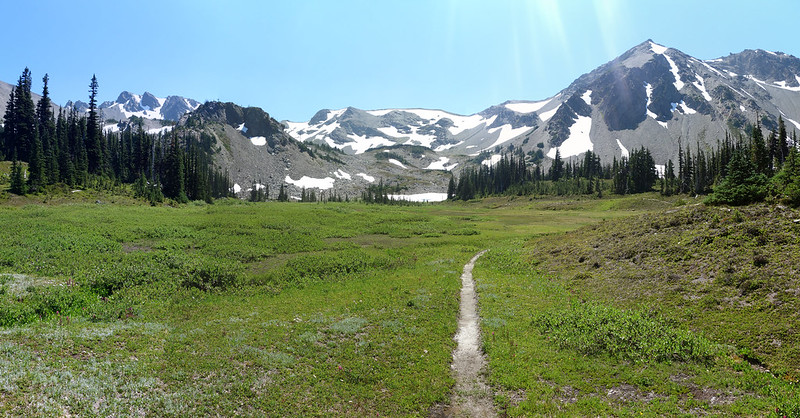 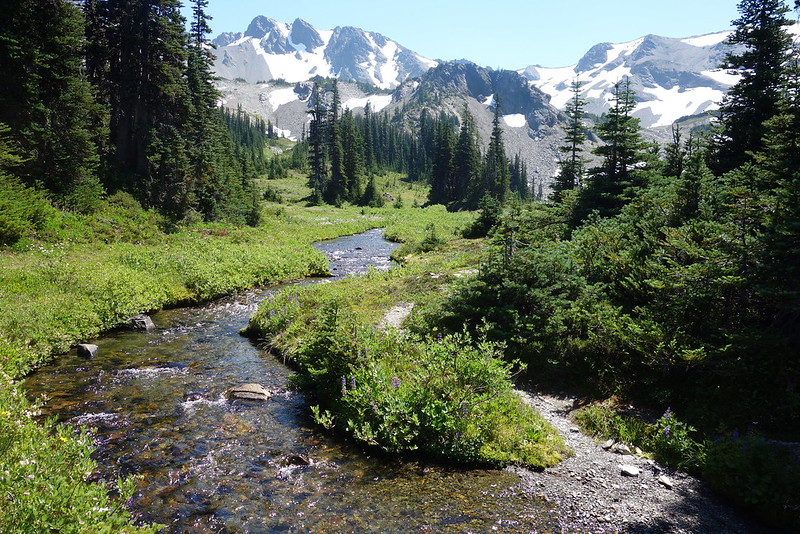 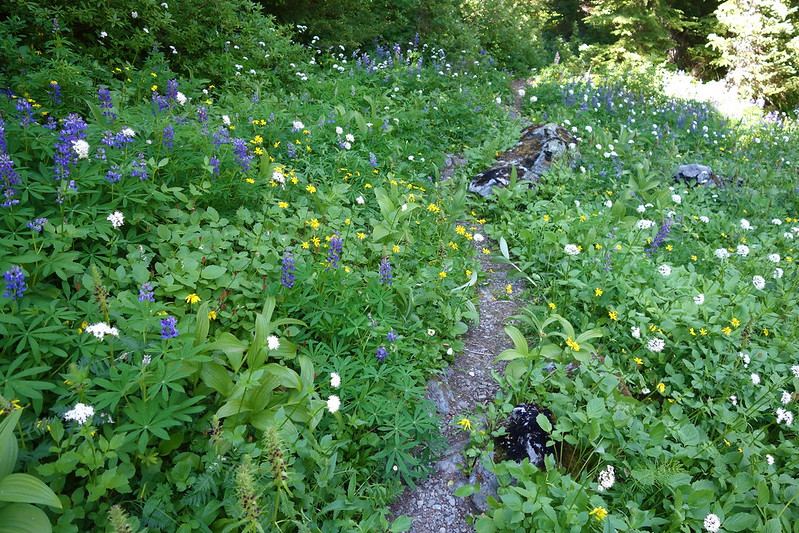 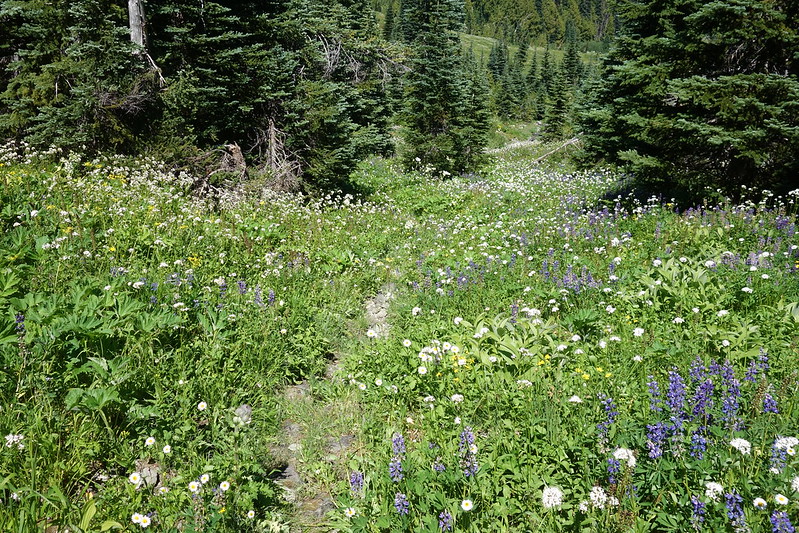 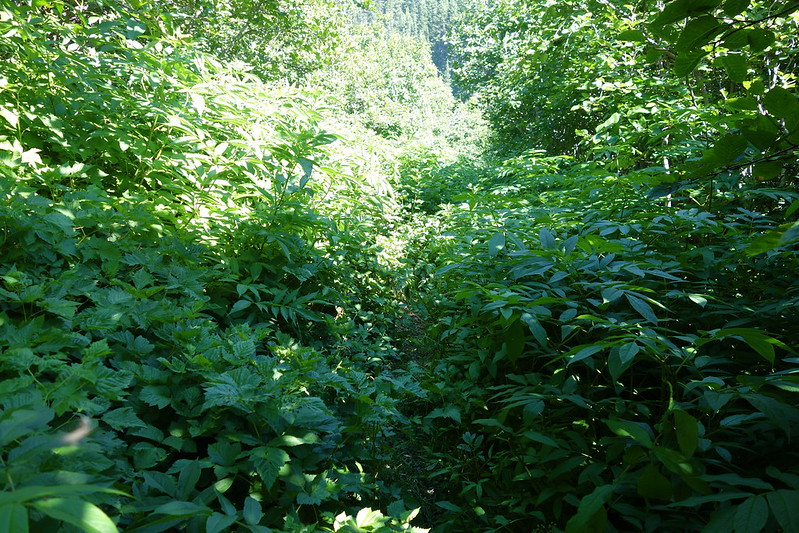 Once in the forest, the trail becomes little more than a slight indent in an otherwise tight thicket of brush. I’m not so much walking as wading through thorns. And there are bugs—mosquitoes and tiny flies—everywhere, roughly the size and density of whiteout snow, flying in a dizzy cloud just above the canopy.

I think of something from Carrot Quinn: We tend to use the word “bushwhacking” to describe any trail-less travel, but this is, well, literally bushwhacking: I’m using my poles to push away brush, but it just comes back, and I end up fighting my way through, slowly and painfully, fantasizing about even small clearings. It’s one of those moments when you just have to laugh, because the alternative is an Apocalypse Now level of horror.

I feel a little like Colonel Kurtz by the time the thicket thins, but then the “Primitive Trail” is over, and I turn west, up the better beaten path to Grand Pass.

At the first switchback, there’s a girl crouching in the trail, looking absolutely dead. I ask where she’s coming from, and she just points a finger the way I’m headed, to Grand Pass. And I ask how the flies are up there. “They’re fucking horrible.” She pauses, then adds, just to make sure I’ve gotten the point: “Fuck.”

But the trail’s actually really nice, and views open to the southeast, on a jumble of peaks that, like the gardens around Lost Pass, I can’t even begin to name.

As the trail climbs, the forest thins again, and eventually cedes entirely to open meadow, thick again with flowers. 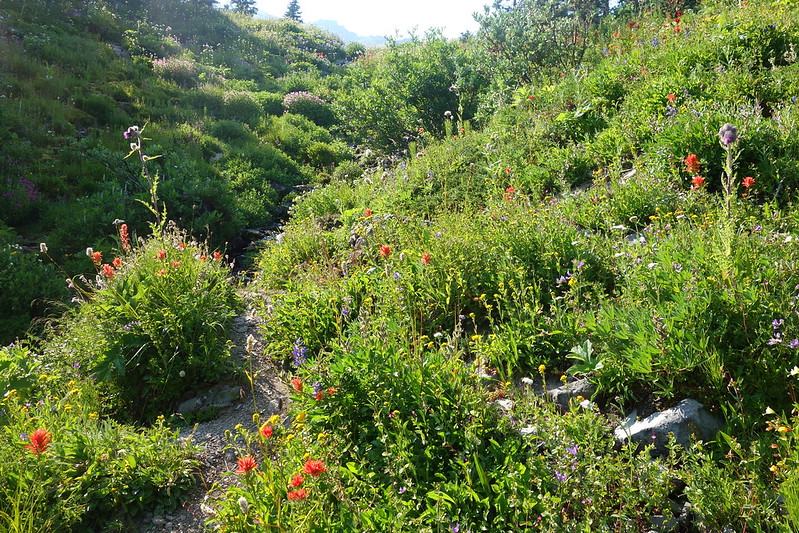 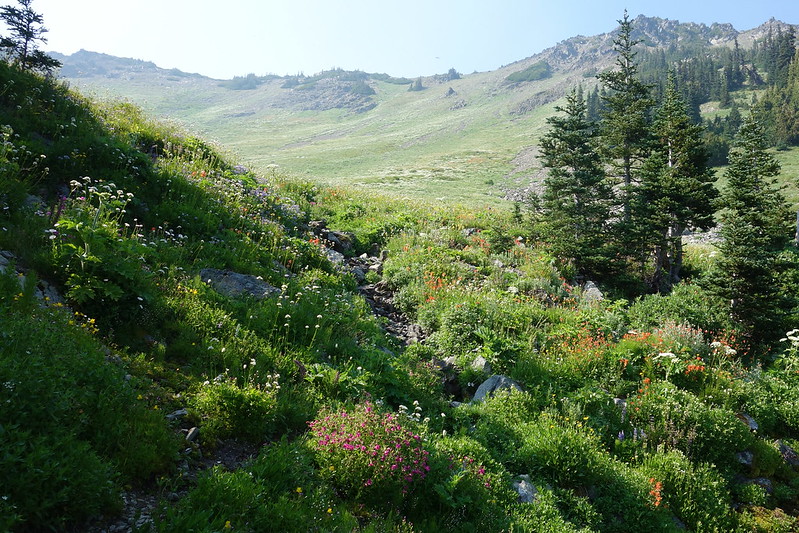 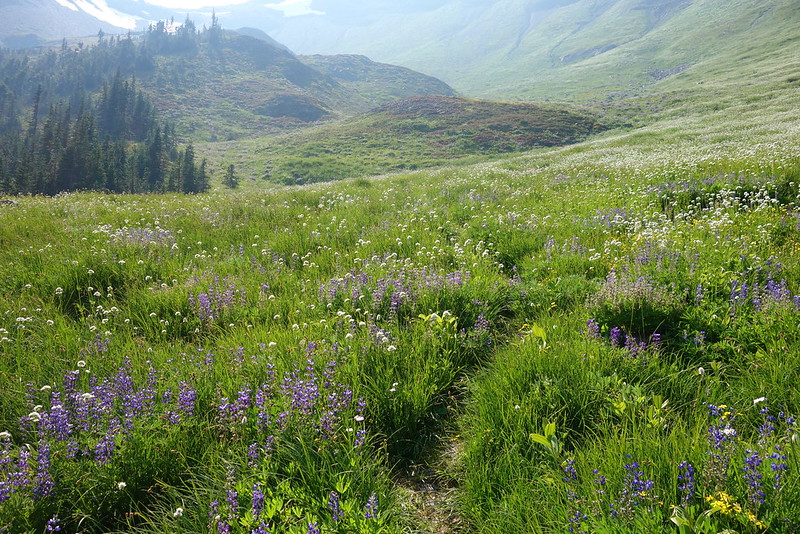 Just below Grand Pass, the trail enters a magnificent cirque, much smaller than Upper Cameron, but fuller: of flowers and flowing streams and families of marmots, whistling in the afternoon heat. 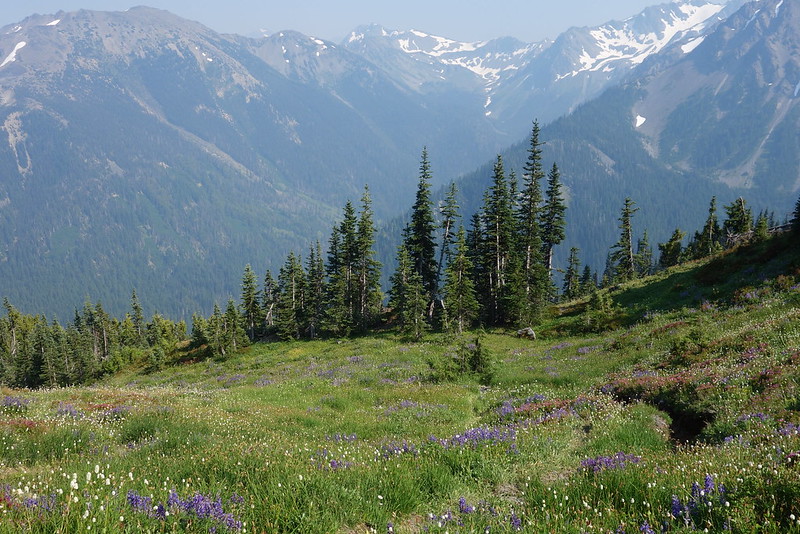 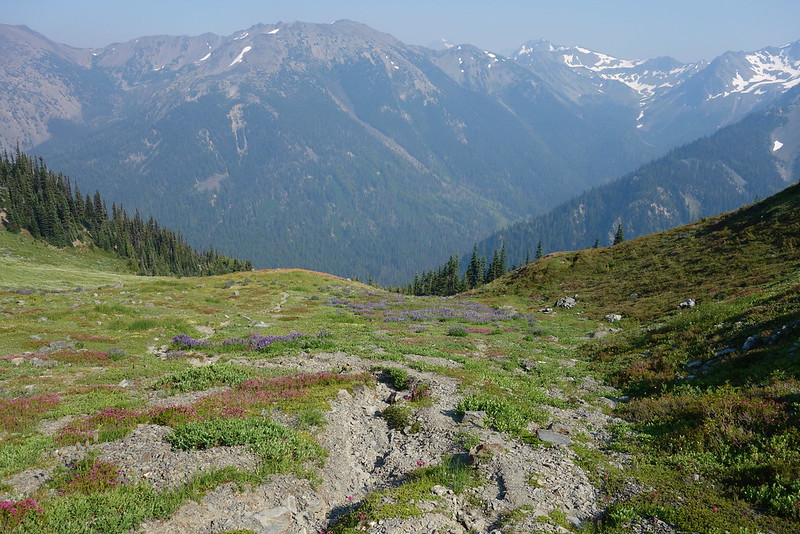 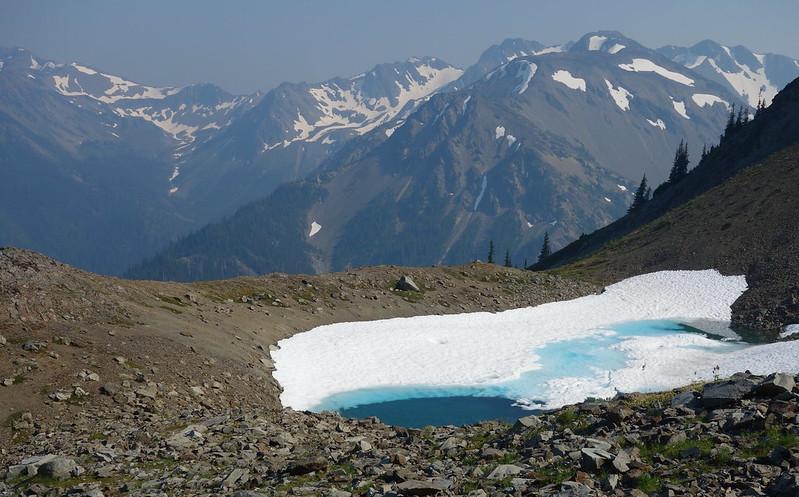 The only trouble is that, in the last few hours, a thick layer of smoke has ascended from somewhere—I hope not too close—and enveloped the peaks and valleys, making everything look like an old picture from the 70s.

I’m a little—okay: a lot—scared. What if there’s a new fire in my way? But I guess all I can do is keep moving forward, and so I do, with something of a renewed vigor, up to Grand Pass. 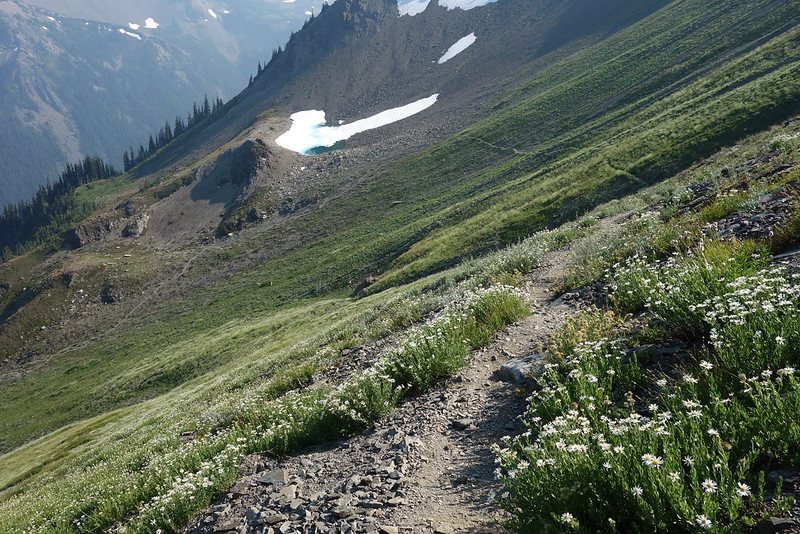 From the pass, it’s an easy descent into Grand Valley: a glissade—on snow this time!—and some gentle switchbacks to Gladys Lake. 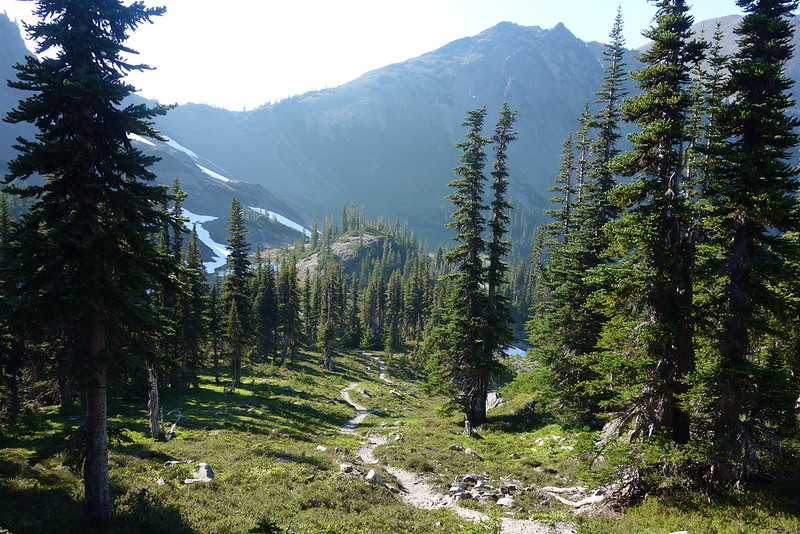 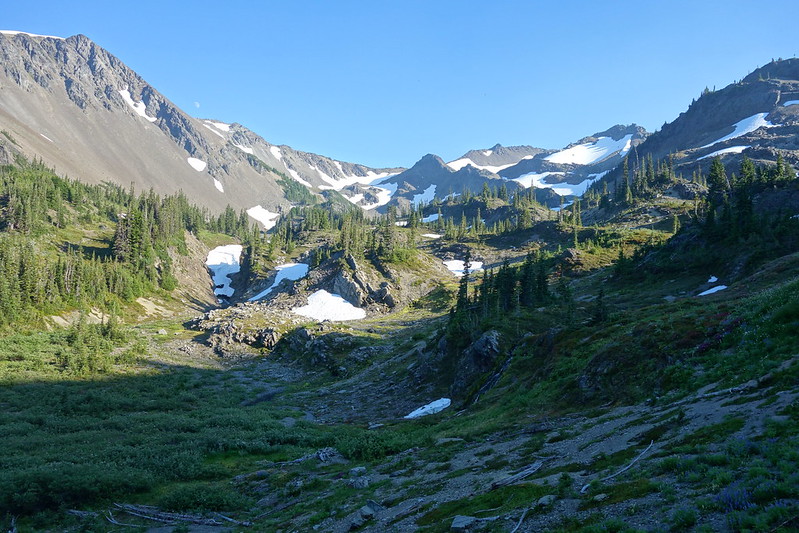 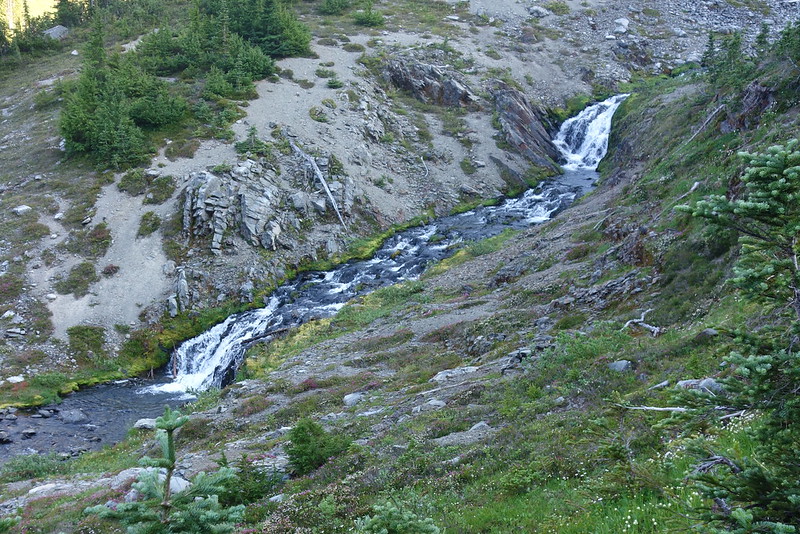 Camp tonight’s a small clearing in the trees, which I’m sharing with a very, very friendly deer, who seems more intent than one might hope on sharing dinner. 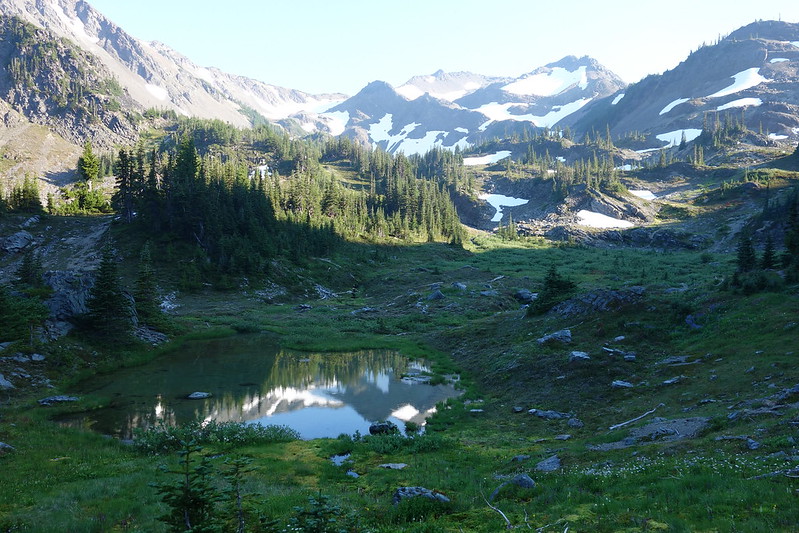 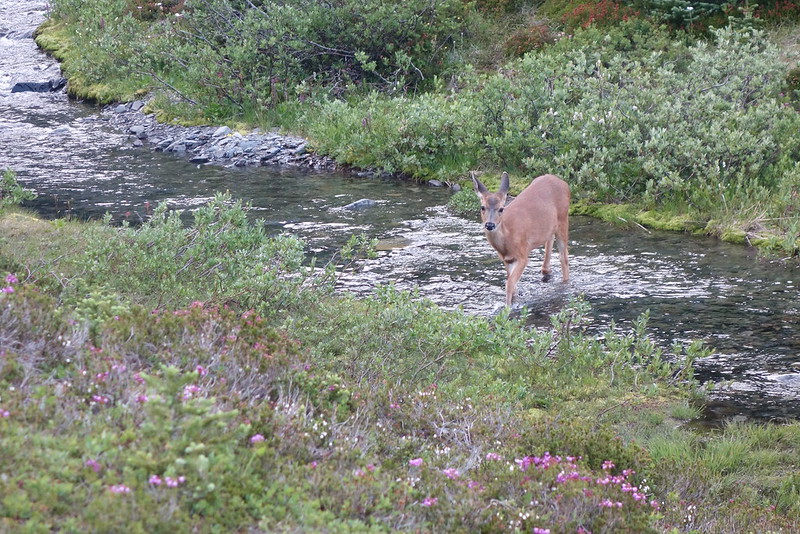 The sun sets and my deer friend retires, and I’m left with just the sound of Grand Creek, splashing convivially down the valley floor. There’s smoke here, but not so thick. Maybe the fire’s close, but at least it’s not in this valley. And so I drift off to bed.

The stars are just visible, hazy shadows in a vaseline sky, and I watch their muted flickers through the mesh of my tent, thinking about my friends from Cameron Pass. I wonder where they are right now, what their evenings are like out here. I wonder what they do in the world out there; if they can keep their impossible kindness. And I wonder if I’ll be able to keep some too, to sing my words unmarred by the world’s stubborn oil.

6 thoughts on “Across the Olympics, Day 4: Pitié and Peanut Butter”