So, before leaving Portland, I had this idea of following the Elwha from where it pours into the Strait of Juan de Fuca to its source, high up in the Olympic Mountains. Leaving this morning, the reality of it dawns on me: 25 miles of roadwalking today, doing my best to follow the river through the neighborhoods north of the Park, then whatever it takes to get to a place to camp on the Elwha River Trail.

That’s doable, but it’s a lot of asphalt, especially in this heat. So I leave the hotel at sunrise and walk through the empty town until the houses fade out again to fields and farms. 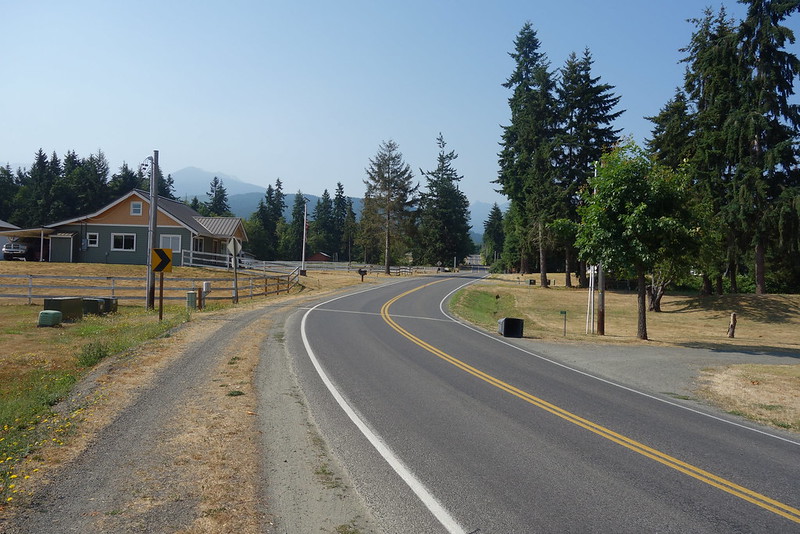 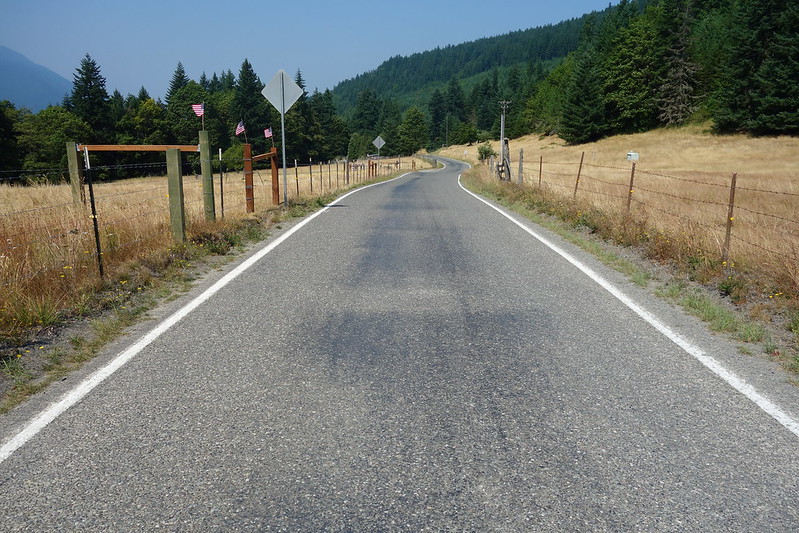 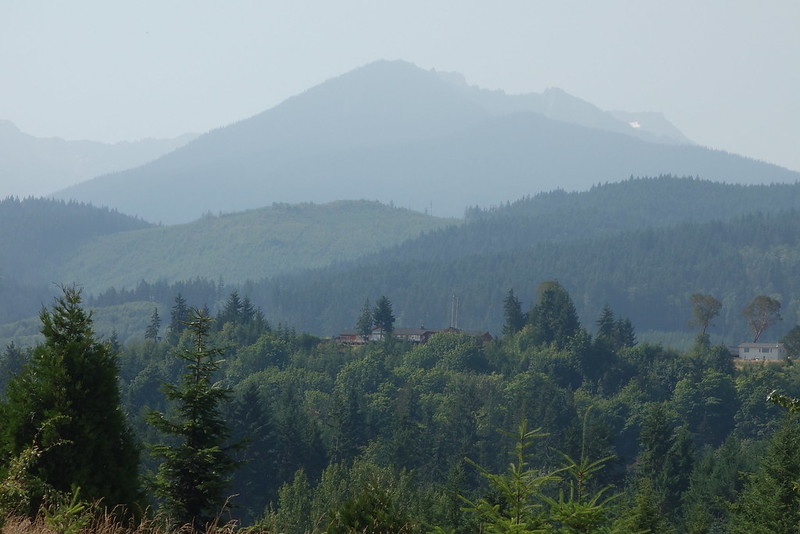 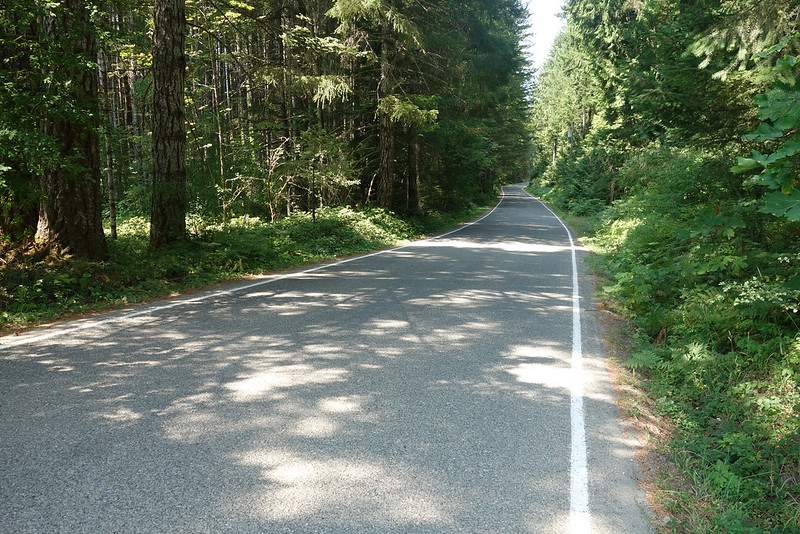 There’s a baffling tangle of roads between the town and river, and eventually I’m reduced to using my compass, just hoping that I’m headed in something like the right direction. But after only a couple dozen wrong turns, I find it hiding behind the brush, a broad band of blue snaking nonchalantly through the suburban streets.

The river starts nearly 50 miles south of here, in a rarely visited basin at almost the exact center of the National Park. But here, its journey—from snow, down rocks and rapids, through old growth and grand canyons, past two decommissioned dams that stood for a century—is invisible, and the river seems ordinary, just an unremarkable aspect of the scenery.

I follow it south as best I can to the site of the old Olympic Power Plant and Elwha Dam. Until 2012, the dam here stopped the river, creating Lake Aldwell upstream, and stopping traffic in both directions: it stopped sand and silt and sediment from flowing into the Strait, and thus impoverished its historic estuaries; and it stopped salmon from returning upriver to spawn. Before the dam, nearly half a million swam against the current every year. But after, it was only four thousand, all below here.

The dam’s gone now, and with it the lake. The estuary’s coming back, and so are the salmon, already swimming deep into the Park. Looking down, you’d never know there was anything here, but for a nondescript boat floating in the river, fishing out the last of the twisted metal scraps left when the dam was breached. 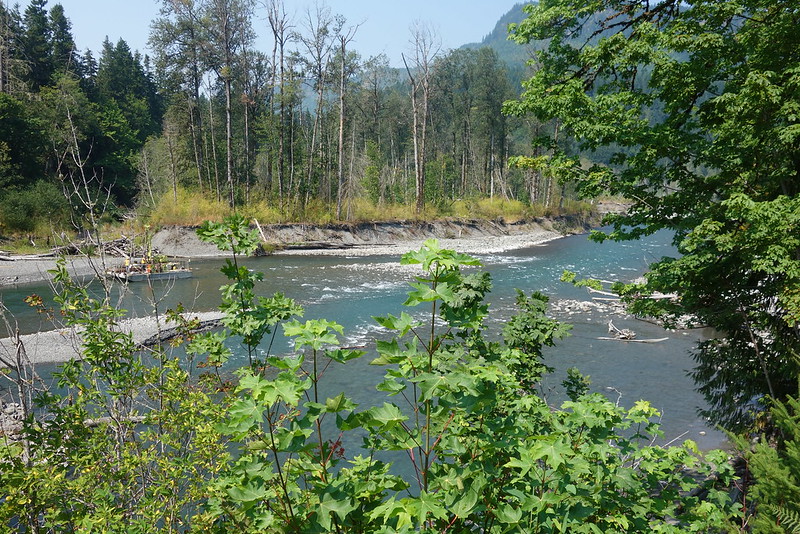 From the old lake, I follow the river south, finally back into the Park. The commuters and locals are replaced by tourists, and the river takes center stage, twisting its way through the flat bottomlands, followed closely by the road. 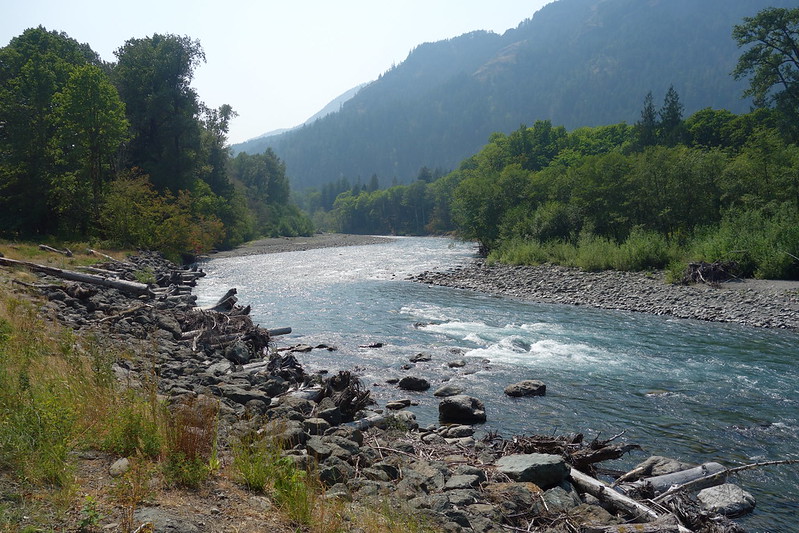 I stop at Madison Falls for lunch, and sit among a dozen kids in swimsuits, all frolicking in the falls’ shallow pool. Then up to Whiskey Bend Road, high above what used to be Lake Millls. 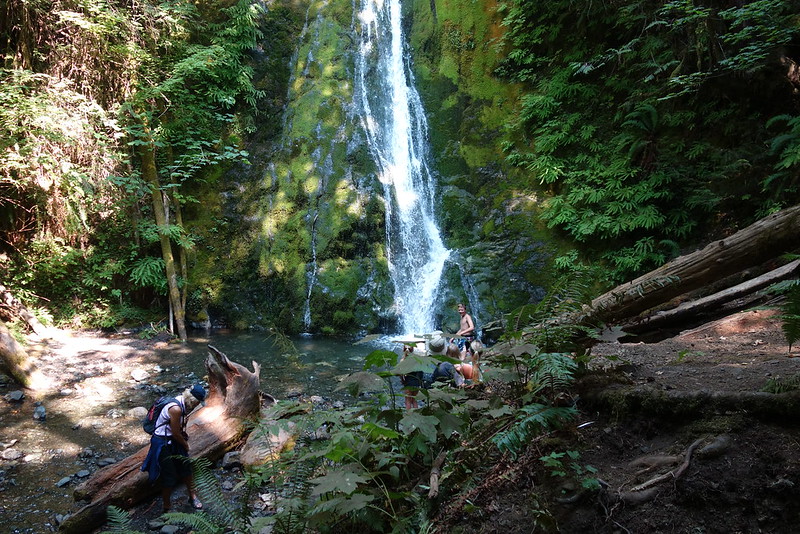 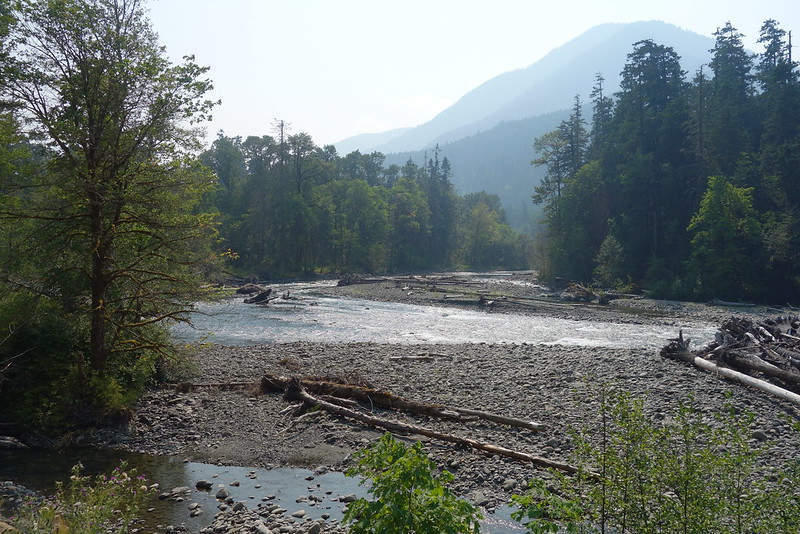 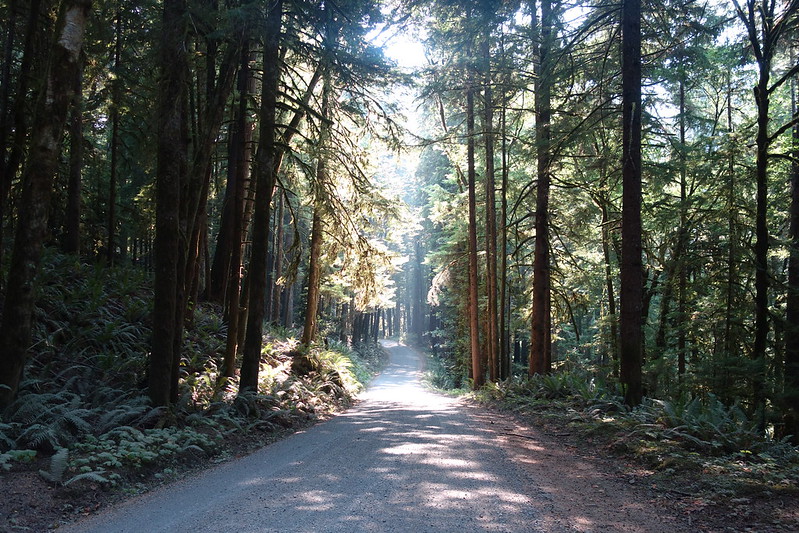 I stop at the Glines Canyon Dam, which, like the Elwha Dam, was just decommissioned, this one more recently, in 2014. The National Park’s made a monument of the dam’s old skeleton: viewpoints on either side, with the river rushing several hundred feet below. 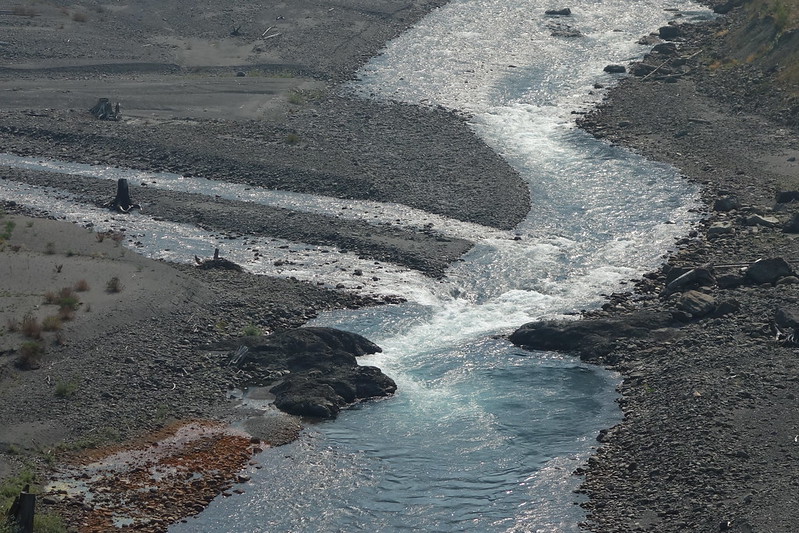 There’s a semi-official trail down the old lake, which I follow through thick underbrush until it dead ends on a steep bank, overlooking the river’s new braided channels. 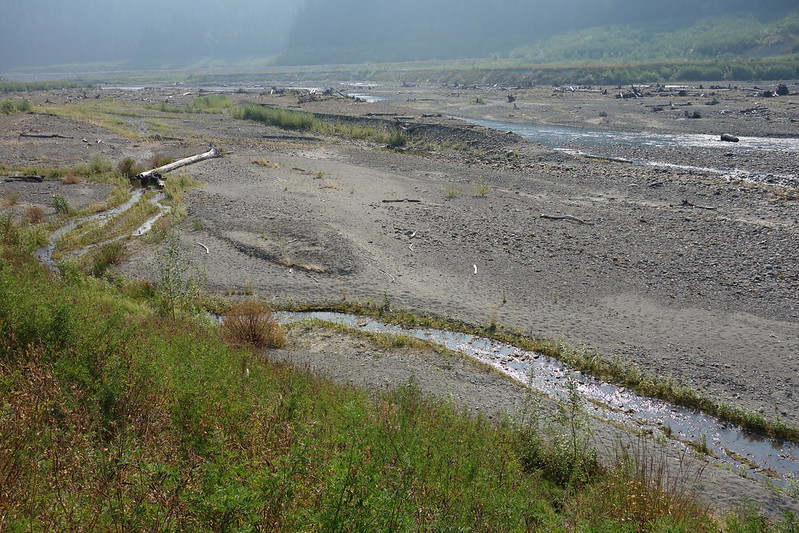 Looking back, the whole thing already looms like ancient history. 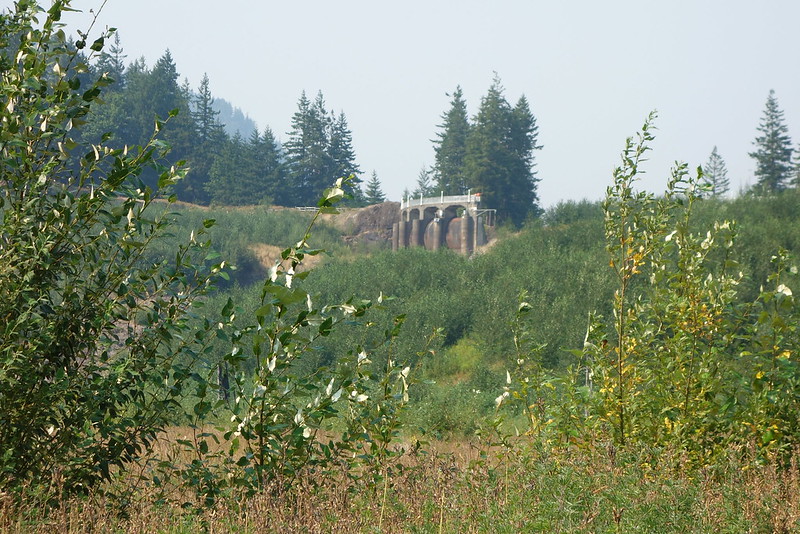 The Park’s signs all focus on restoration: of the estuaries downstream; of the river’s natural ecosystem; of salmon; and, on the periphery, of the once-flooded holy places of the Lower Elwha Klallam people.

But the old structure is a strangely ambivalent symbol for all of this. It’s beautiful, of course, but the primary fact about it is that it’s broken. Indeed, its brokenness is precisely the point: we built it; realized we were wrong; and destroyed it to return the world to what it had been. In that sense, its brokenness signifies a sort of noble abdication, a realization that humans and our machines do not belong everywhere, that the world is sometimes better without us.

I think of Tocqueville’s observation that early Europeans in America tended only to see wilderness as an impediment, a boundary with no value of its own but for the possibility it promised that our civilization might one day grow to fill its alleged emptiness. And I think of Roderick Nash’s remark that “it was ultimately civilization that made possible the appreciation of wilderness.” We filled the country with ourselves, and only later realized that it was already full of things much dearer. And so we pulled back to preserve the scraps of what was once the whole world.

Here, then, is the whole story of the west and our wilderness, in miniature: civilization, its shadow, and the world that was, shining through the cracks.

The road ends a few miles beyond the old lake, replaced by a trail nearly as wide and, improbably, perhaps better traveled. I meet a dozen people in the first mile: dayhikers heading home, backpackers heading out, and Hiker Bros carrying cases of beer. 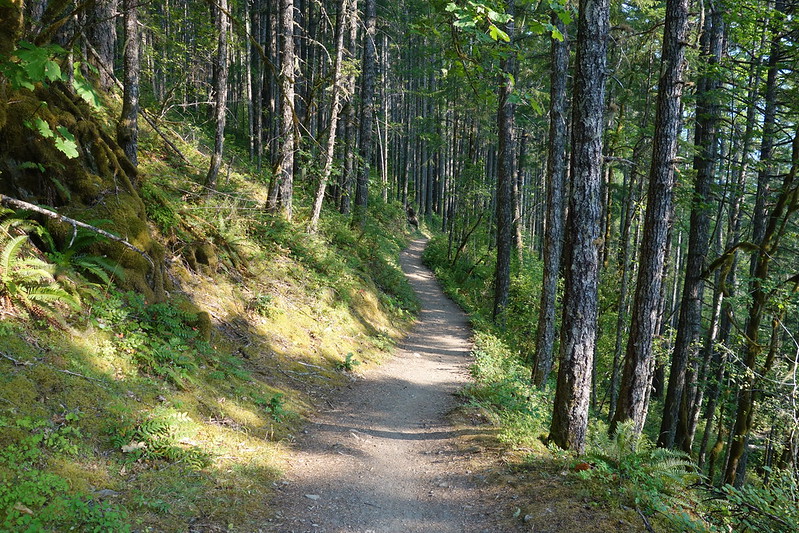 It’s five miles to my planned camp for the night, near where the Lillian River meets the Elwha. But it passes quickly as the day’s heat fades into a pleasantly warm evening, and soon I’m making dinner in a tiny clearing on the banks of the Lillian, watching fish wander upstream. 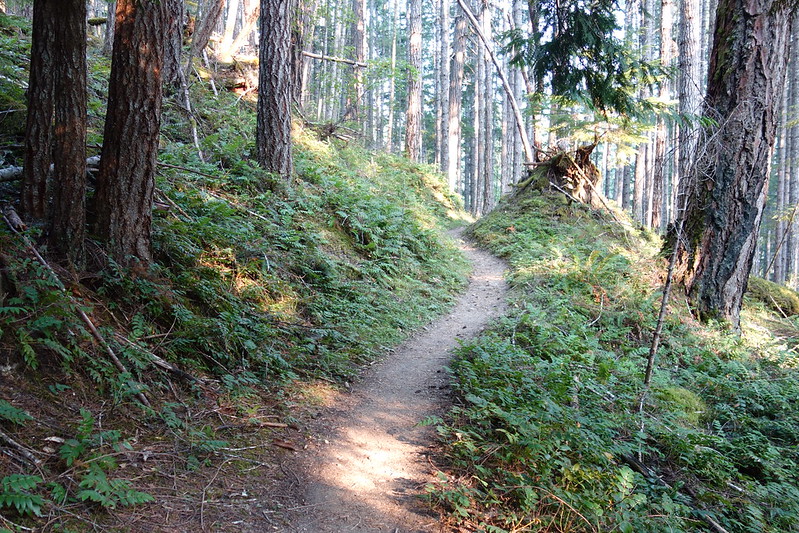 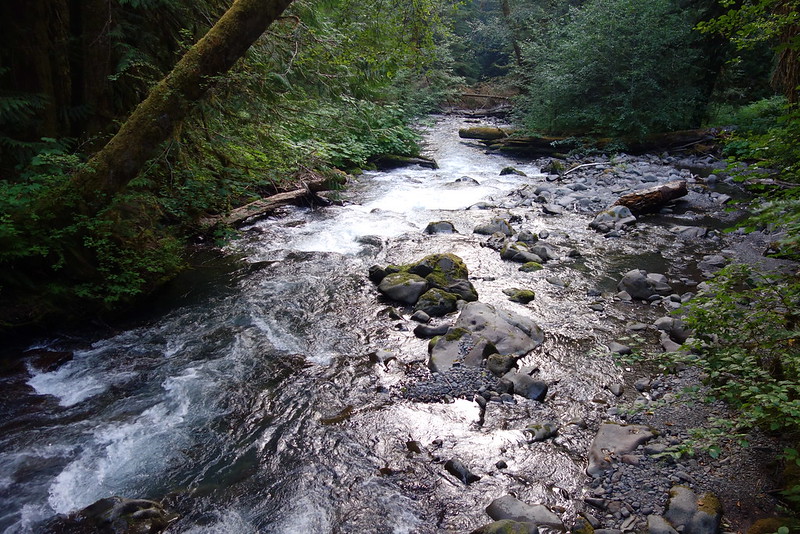 One thought on “Across the Olympics, Day 7: The Elwha, On Its Way”