I wake up to the Lillian River’s rushing roar, then stumble out to find a world much richer than I realized last night, all ancient cedars and sword ferns, all green in every imaginable shade. Wood calls the camp “dark, damp, and gloomy,” but after so much time on smoky streets yesterday, it feels like an oasis.

I eat breakfast on a moldering old log in camp, watching the water rush by, then pack up and head toward the delightfully named “Difficulty Hill”—a small rise named by the Press Expedition when their mules had some trouble.

It’s really not so bad, though, at least for human legs, and the morning passes pleasantly, making easy miles through thin woods. The trail here climbs high above the Elwha’s “Grand Canyon,” but one can still hear the rumble of rapids, several hundred feet down, echoing up the river’s steep stone walls. 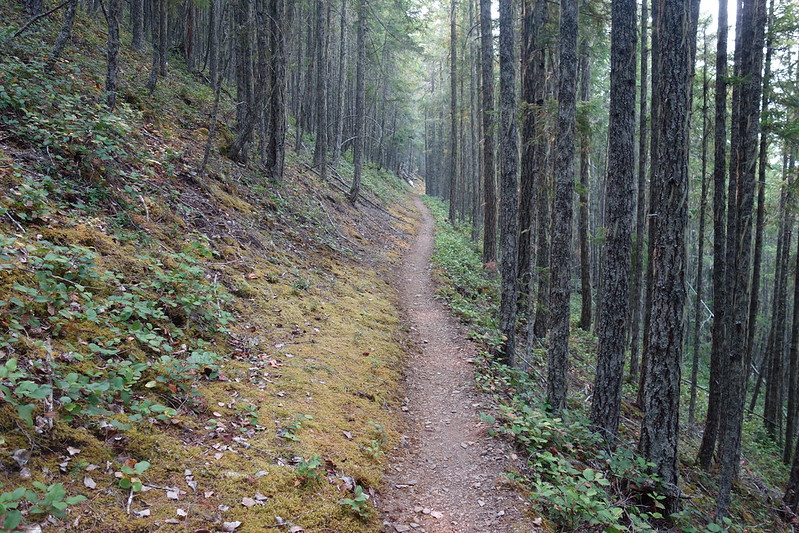 After a mile or two, the trail starts a long, easy descent to the river, through increasingly rich stands of old growth fir. 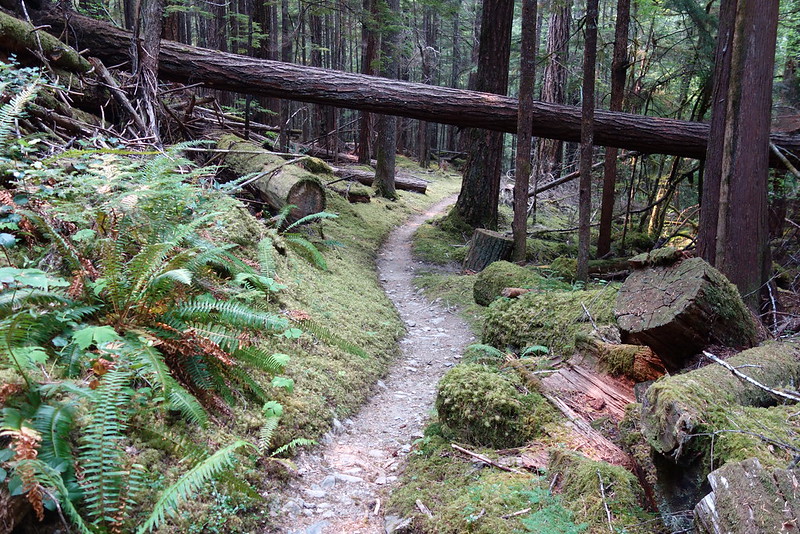 The river’s rumble is gone, replaced by the companionable trickles of several small streams, weaving their ways down from Windfall Ridge. I haven’t seen anyone since leaving the Lilian—I won’t see another person, it turns out, for nearly five days, until I reach the Quinault—and something about the solitude makes the sounds seem wilder: the low misty murmur of water through moss; the slow aching of trees in subtle wind; the steady, dampered beat of my feet… 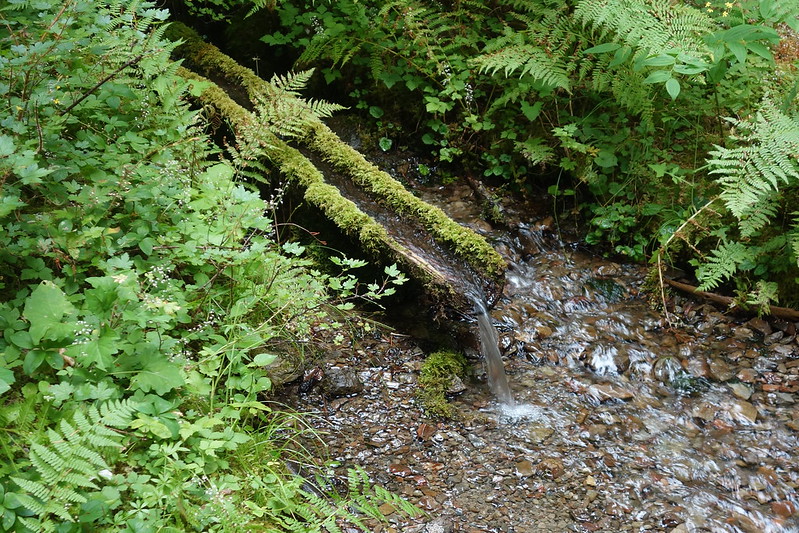 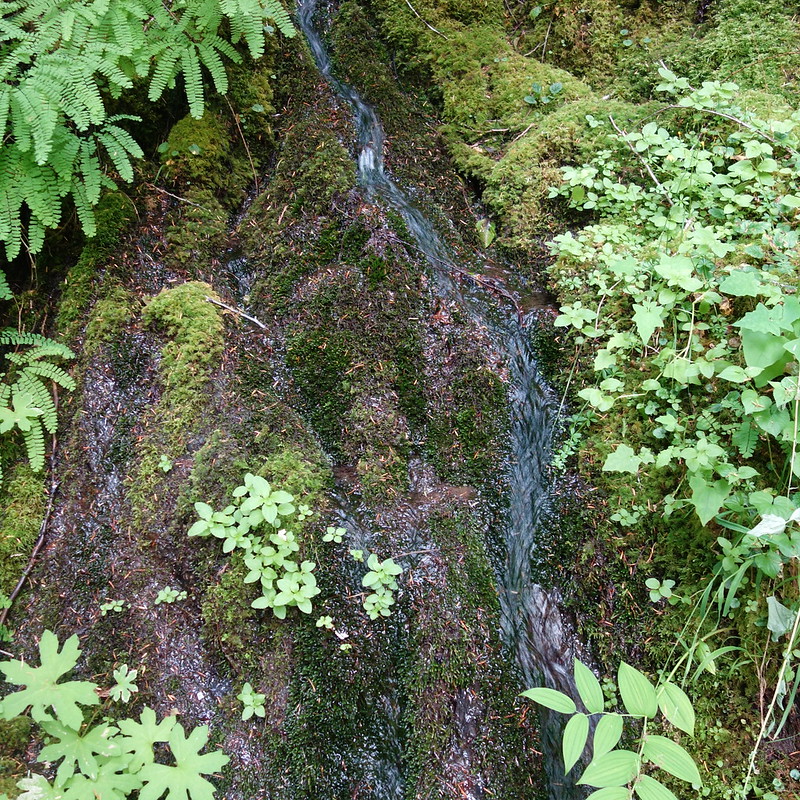 John Cage tells a story somewhere about spending an hour in an anechoic chamber, supposedly shielded from all outside noise. But as his ears adjusted to the silence, as eyes to low light, he began to hear two sounds: a low, rumbling rush; and a high, almost electric whistle. When he later asked an engineer what had been happening, he was told that it was his own body: the rush of his circulating blood, and the whistle of his nervous system. Even in silence, there was sound.

The same seems true here, where the silence of civilization does not yield an empty field, but instead reveals another world, smaller and subtler, but here all the same, background noise made into music.

I eventually reach the banks of the Elwha, and stop for a snack at a small riverside camp. 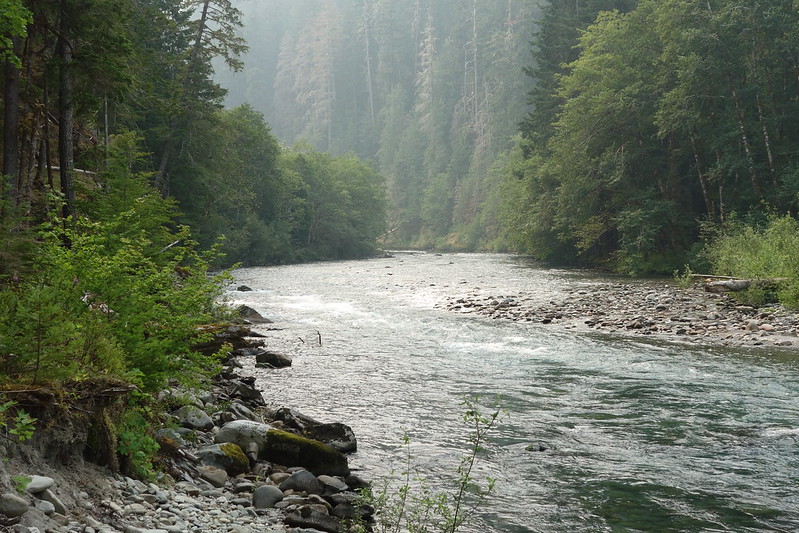 I’m halfway through my Snickers before I notice two eagles high above, almost stopped in the wind. For ten minutes they soar over the trees, like statues suspended in air, and I watch, rapt, with a stillness that matches their own. But then, as if on cue, both suddenly dive down to the water, faster than falling, and splash in. I guess they’re hunting?

As one flies back up to the trees, I can just hear its wings against air. It sounds like a heartbeat. 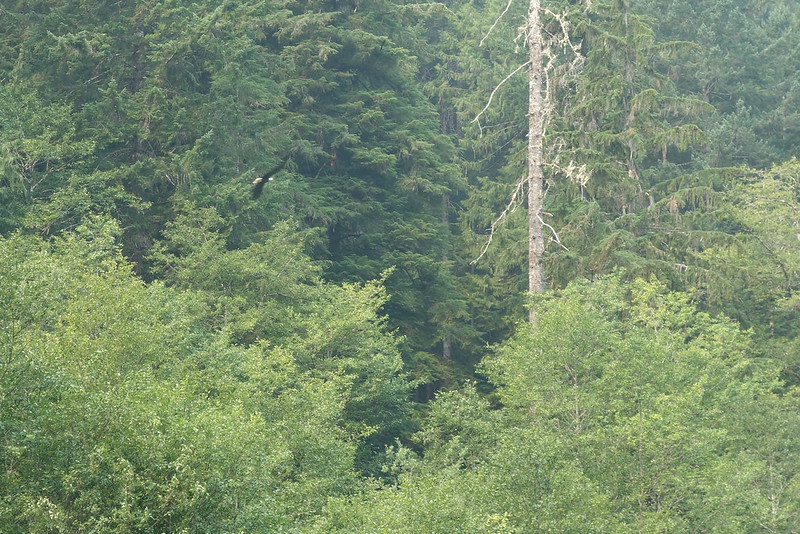 I think of a scene from Jonathan Safran Foer’s beautiful book, Here I Am, where a father and son are sitting on the roof of some house, watching the night sky, talking in hushed tones, the way people always seem to do in the dark. The son—a budding astronomer—asks one of those questions it only ever occurs to kids to ask: “When people look at stars, they tend to whisper. I wonder why?”

For the next many miles, the trail is a flat, bottomland path through ancient stands of cedar and fir, bordered by maple and alder and fern. It’s easy and beautiful, and the afternoon passes effortlessly to the shifting sound of the river, rushing through rapids then slowing to deep, still pools. 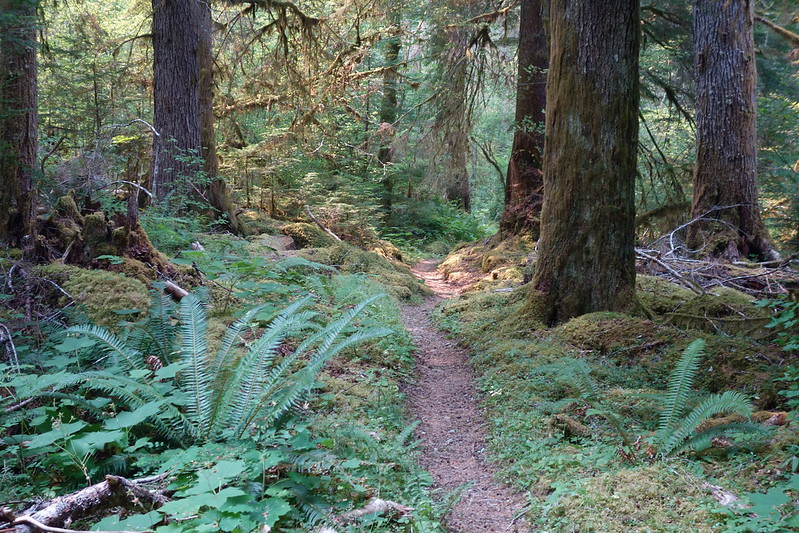 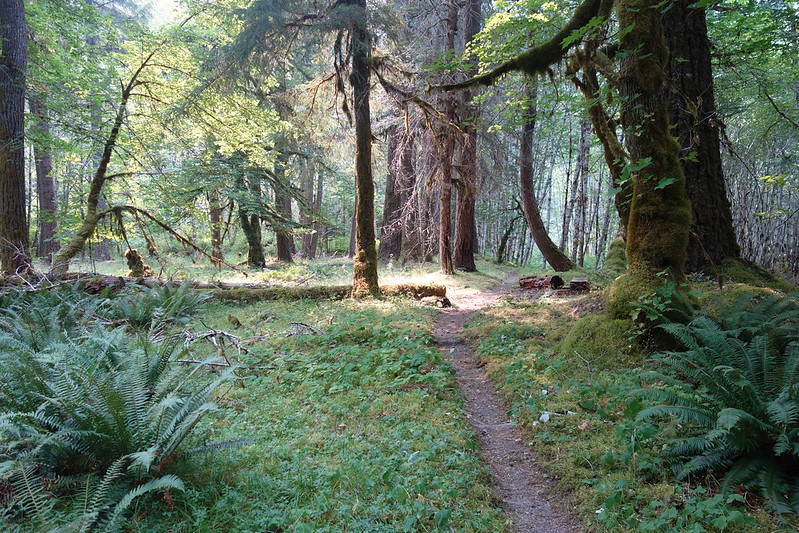 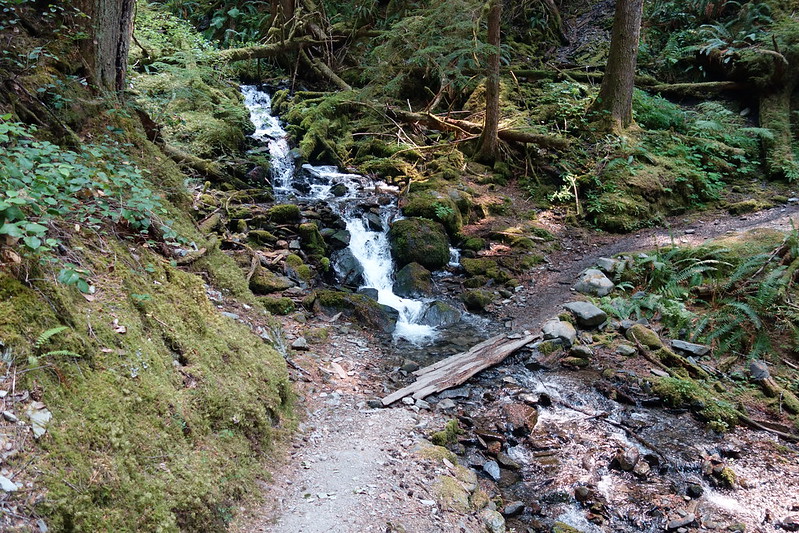 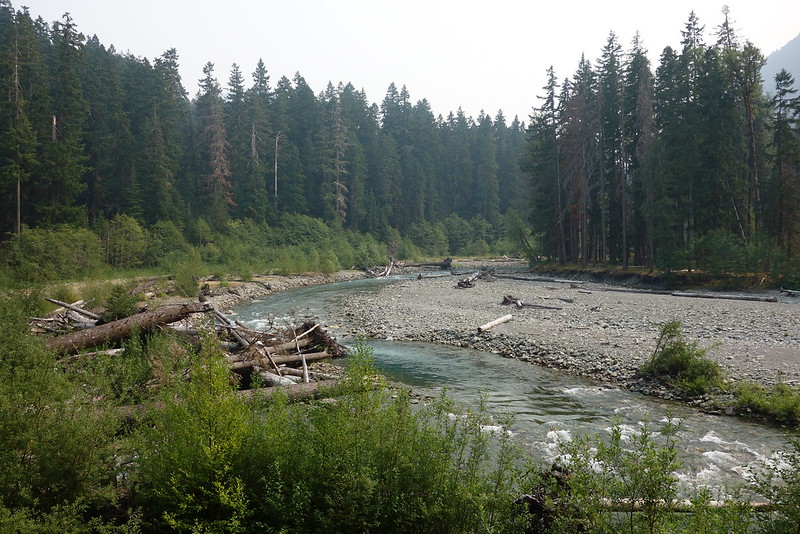 I feel like I’m sleepwalking, or anyway time seems suspended, and I find myself gently humming through the gentle hills, as echoes of the river resound through the trees into a single, sustained chord, which carries me through miles of woods and into the evening’s fading light. 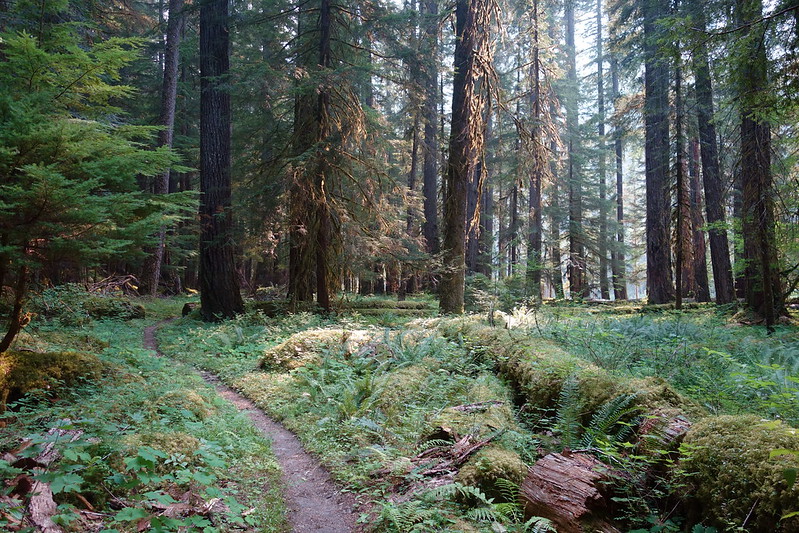 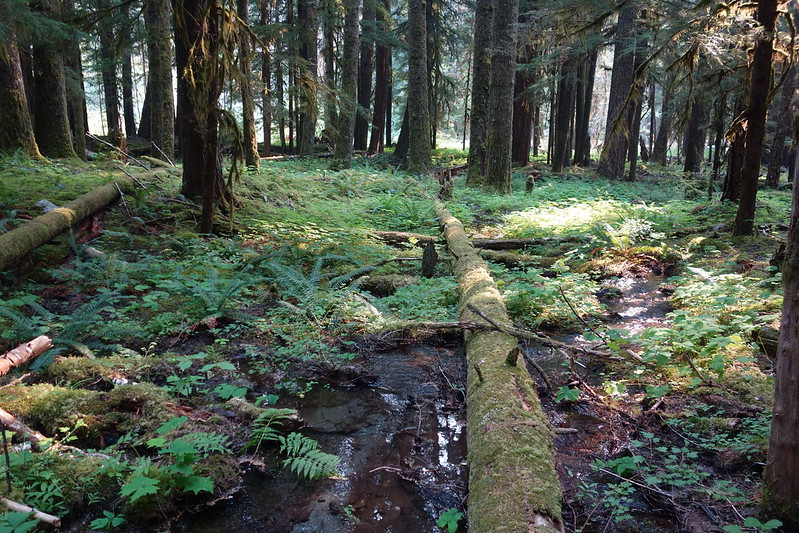 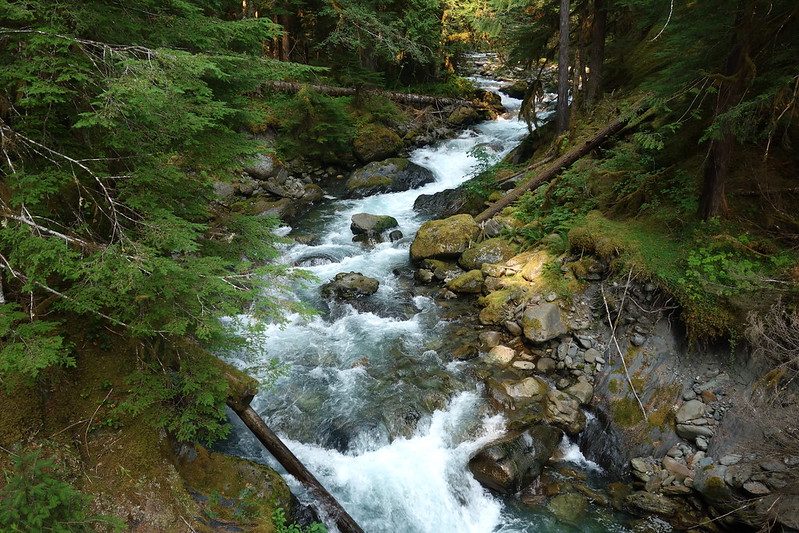 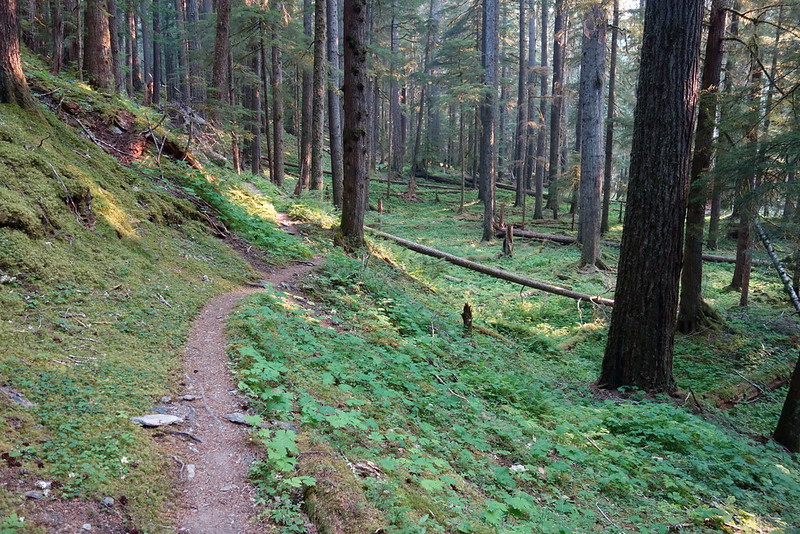 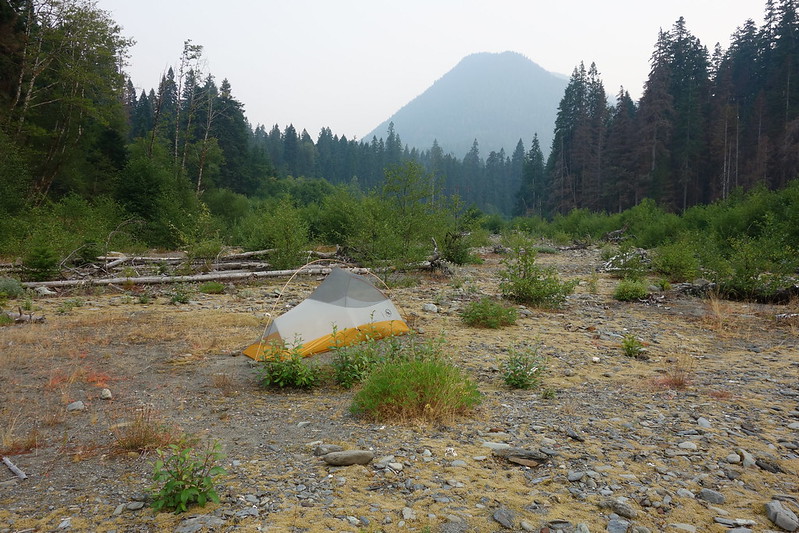