I can’t sleep, so I walk out in the middle of the night, over to a cliff at the edge of the park, overlooking the glowing Christie Glacier. The moon’s so bright that it feels like dusk, or sunrise, even though both are hours away. I sit for a while, watching the lower basin’s contours appear as my eyes adjust.

Somewhere far below, something howls. It echoes up the basin, no louder than a whisper, but loud enough in the still night silence. I think for a second—there’s no one for miles, no one to disturb—so I howl back, doing my best impression of a wild thing. My voice seems strange to me. I haven’t heard it days. I hold my breath as it echoes down, into nothing, then wait for it to settle through the hills and valleys. A minute or two pass in warm, dark silence, then there’s another howl from below, two now, from different sides of the basin, reverberating off the ridges into a stilted sort of harmony.

The sound seems to keep going, folding back over itself, until it almost resembles a choir. Something from Takemitsu maybe, but wilder. It feels like magic.

There’s a perfectly good, functional explanation for what’s going on here: the coyotes or wolves of whatever are marking their territory with sound. But the mechanism by which they do that marking—howling out in the night—seems to do more than that. Before they can say “this place is mine,” they must first proclaim their presence in the place, to say, in effect, “here I am.” And to me, a stranger here with no pretense of ownership, that simple proclamation, ringing out in the night, feels impossibly profound.

Maybe it’s the hour, or exhaustion, but I feel a sort of kinship with them. Here, out here, with nothing between the world and I, I feel stripped of all unnecessary varnish, stripped almost to something essential. Waking, walking, eating, sleeping, and not much else. Here I am, too.

In the morning, I sleep until well after the sun’s come up, then spend an hour in the tent, eating breakfast, hiding from bugs. There’s no real rush today—just ten miles—so I sit with my coffee, and stare out into the smoke-gathering sky. 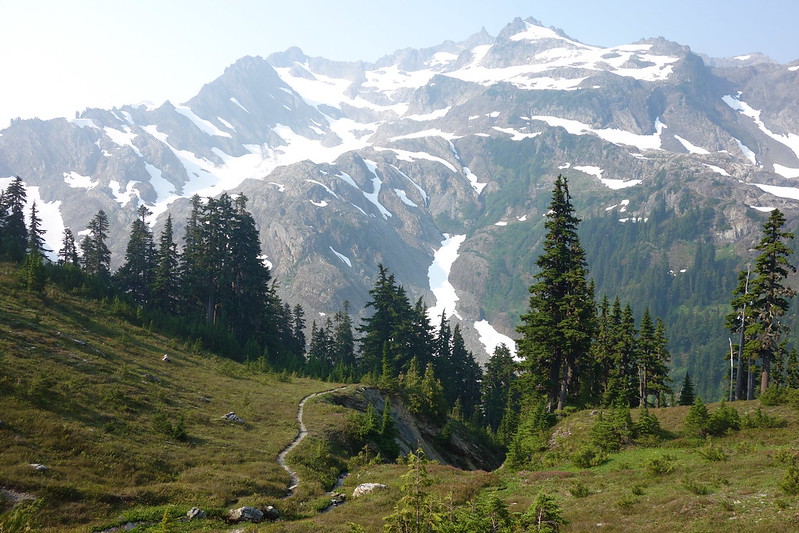 The walk back down to Low Divide is much easier than the way up, and it passes quickly, on now-familiar faded trail, through now-familiar basins. 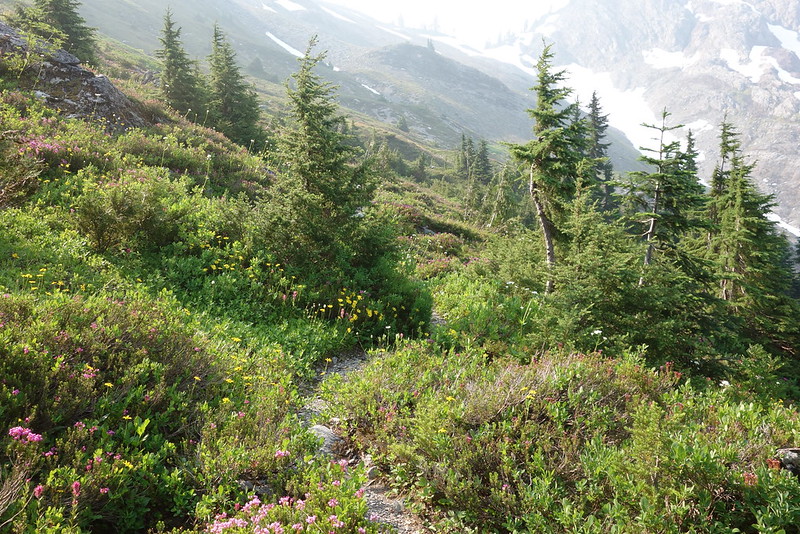 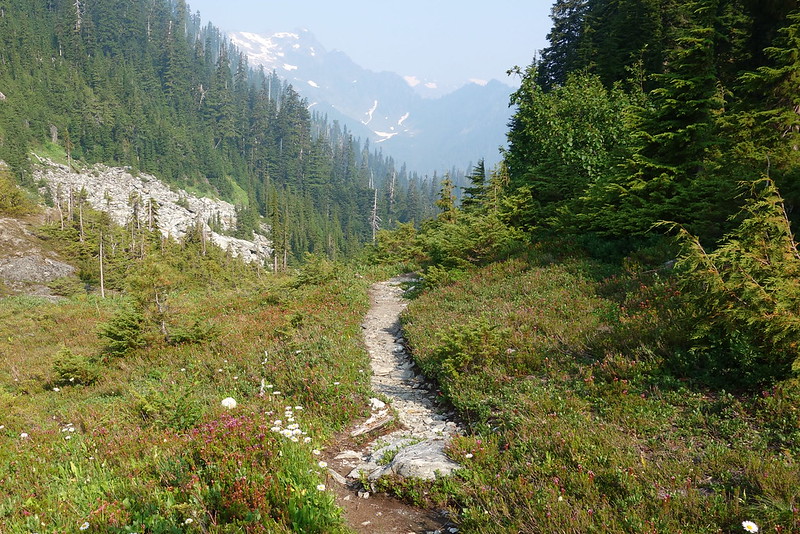 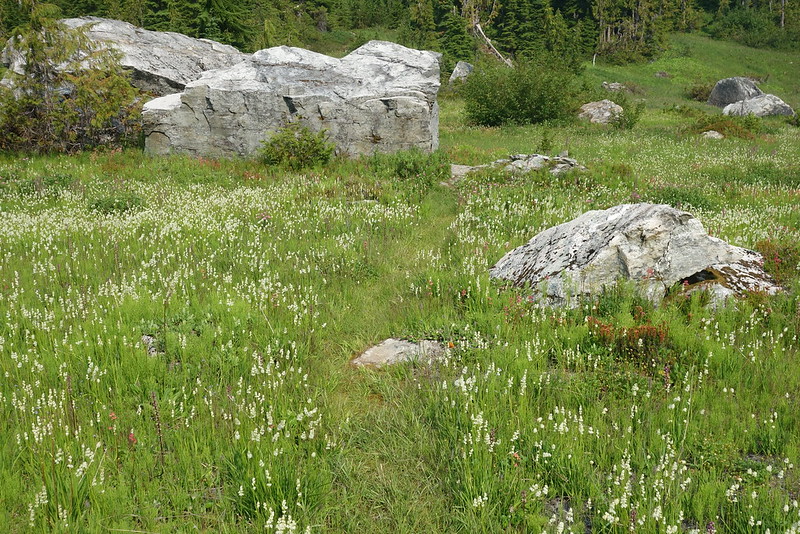 Just above the divide, there’s a sudden, staccato call, and half a dozen tiny birds clumsily come out of the bushes and fly into nearby boughs. Grouse! The young ones hide, but the adult stands still. I wonder how many things like me she’s seen. 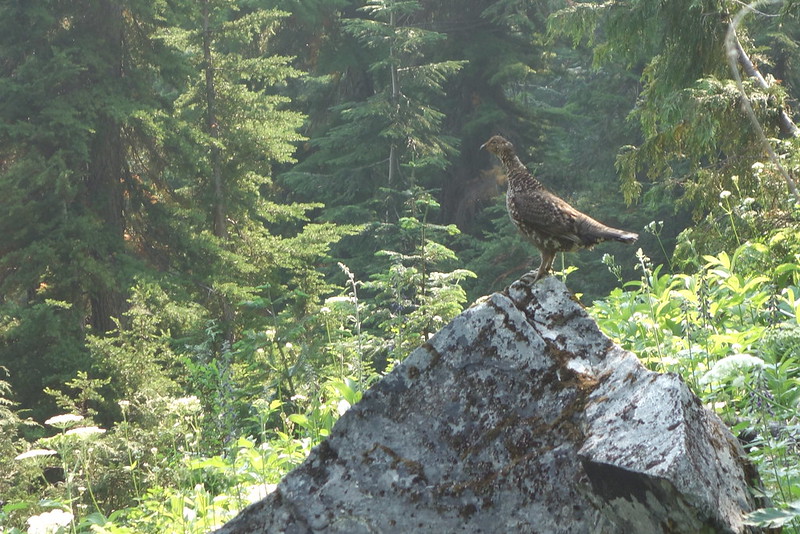 Back down at the divide, I rejoin the main trail, and follow it through fields of flowers to the old ranger station and the headwaters of the North Fork Quinault. For the first time on this trip, the streams are flowing west, to the sea. 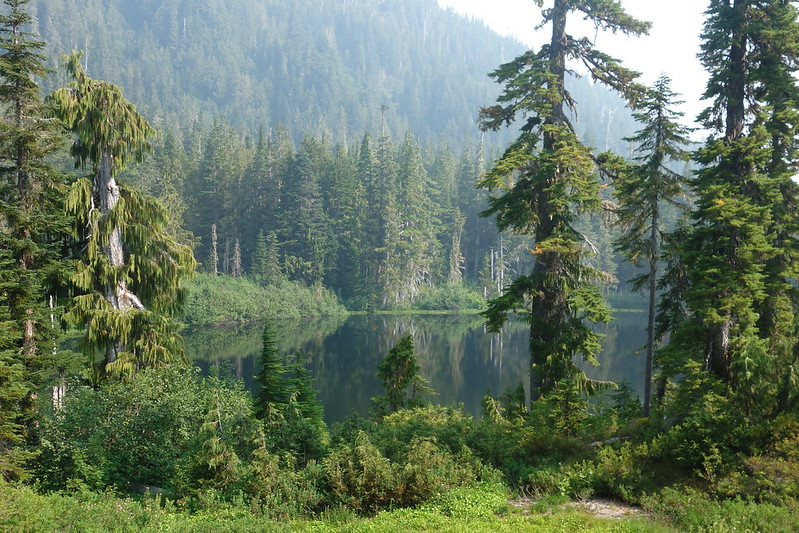 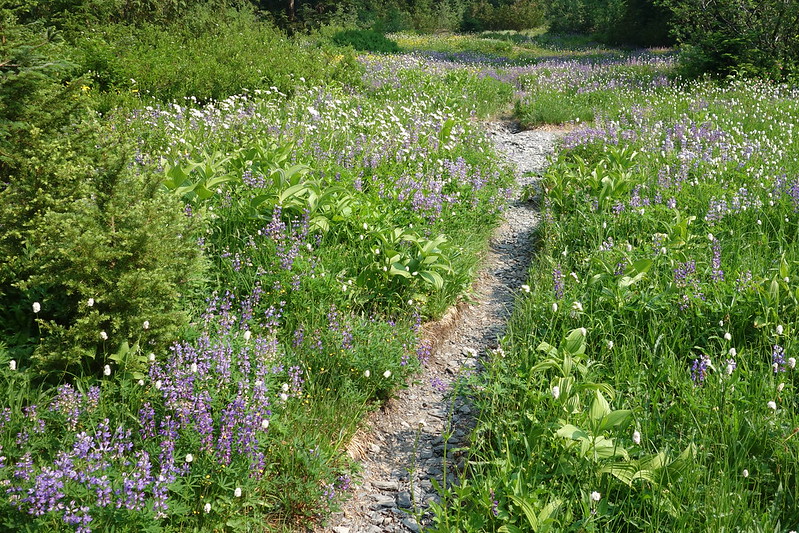 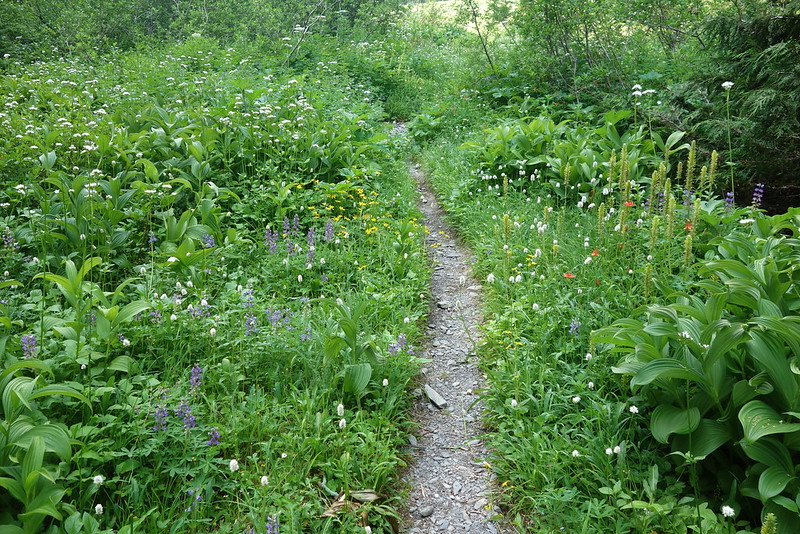 Just as the North Fork is forming from a collection of streams into a proper river, I turn off the trail onto an almost comically overgrown path—the Skyline Ridge Primitive Trail—which I’ll follow for the next two days, as it takes me along the entire length of the ridge that divides Quinault and Queets. 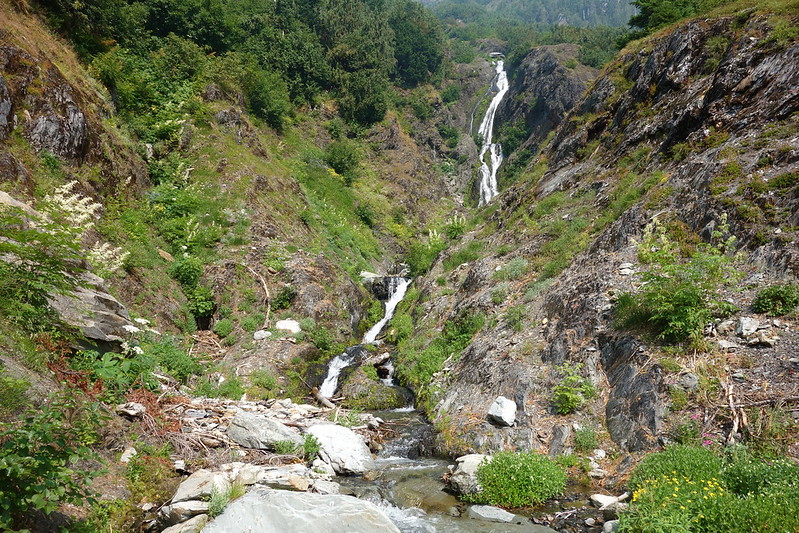 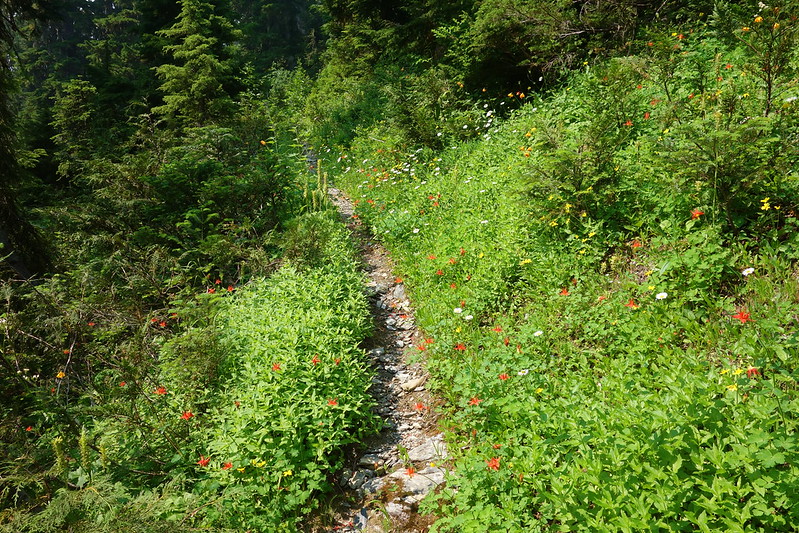 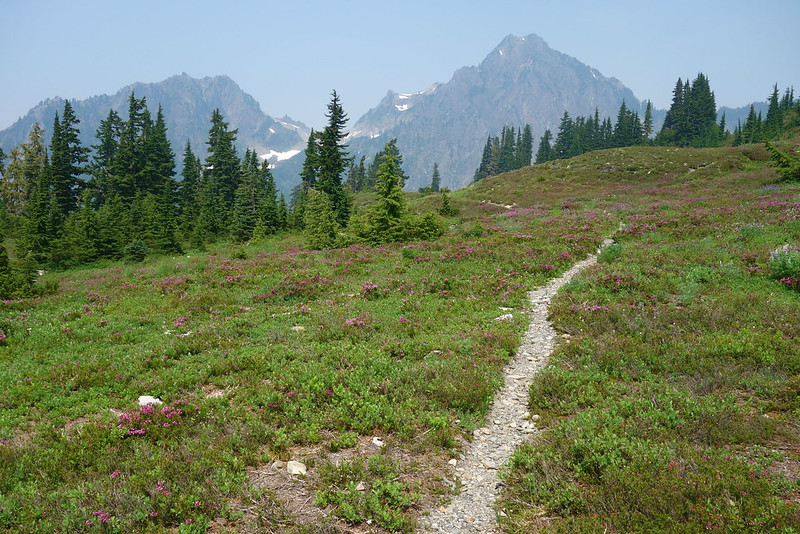 And then the washouts.

Up until now, the trail, though primitive, has been pretty good: sometimes overgrown, sometimes a touch eroded, but overall easy to follow. Yet, as I enter the Seattle Creek drainage, things degrade. Quickly.

First is Seattle Creek. There’s a braided set of switchbacks down, then a snowfinger, stretching from somewhere above to a bit below where the trail ostensibly crosses. Under the snow, I can hear water rushing. 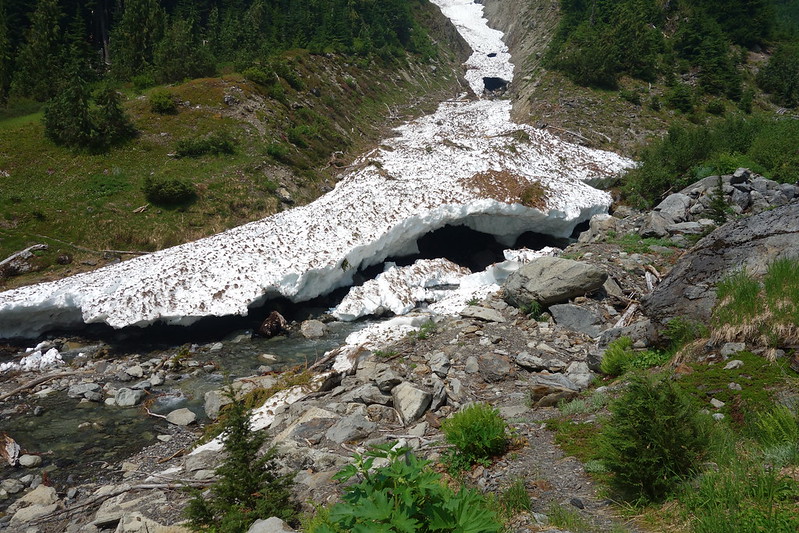 I’m sketched out by snow bridges in the best of times, but this seems particularly unstable. I walk around for a while trying to find a way through. There’s a six-foot wall of melting ice and snow blocking the far bank, so I rock hop downstream until there’s a clear-ish spot: just a little snow, and a grassy bank on the other side I can probably scramble up. I take it slowly, stomping to check the snow’s stability before taking each step. A small section collapses into the rushing creek below, but I hop over, and eventually make it up the bank and find the trail, a hundred feet upstream from where I crossed. 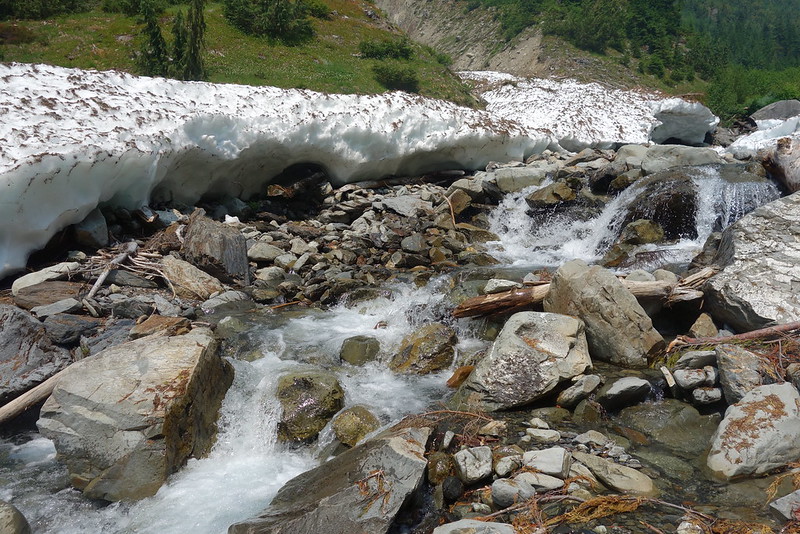 After Seattle Creek, the trail turns around and switchbacks south, up toward Skyline Ridge. I think I’m done with tough crossings for the day. But then of course there’s another, this one much scarier. The trail descends slightly toward a minor tributary of Seattle Creek, but then, just… disappears. There’s nothing, no trail at least, just a rocky, sixty-degree slope covered with a thin layer of scree. I step out, tentatively, and push down to see if it’ll hold my weight, but the scree collapses beneath, and tumbles thirty feet down to the water. 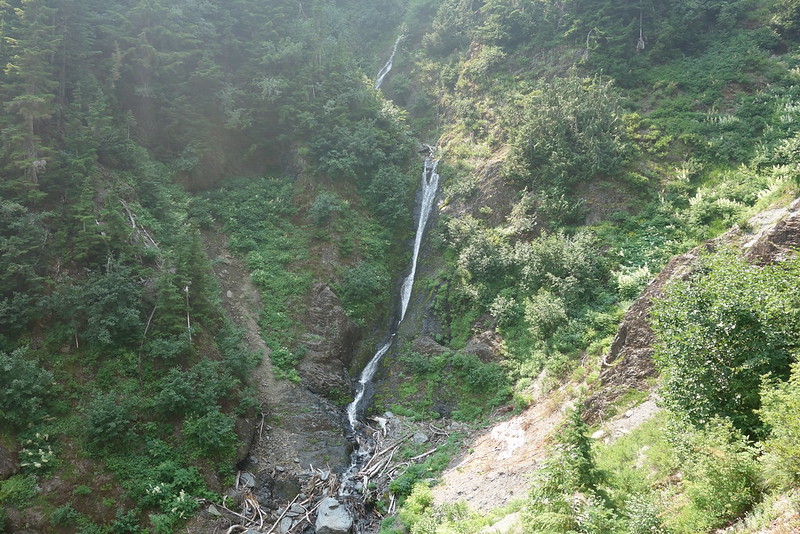 I think through my options. I could turn around, retrace my steps, and go back on the North Fork. But I really want to see the Skyline, and I’m sure there’s another way. I backtrack a bit, into the trees, and look down. One could almost—almost—imagine climbing down to the creek using tree branches for handholds. I can’t tell if there’s a safe way back up, but, well… I guess it’s worth a try?

The climb down is quick, but scary. A branch breaks and I have to do a bizarre sort of self-arrest in the scree. I rip my shoe and drop a pole, which clatters down to the creek. But soon enough I’m at the bottom, looking up, and wondering how the hell I’m going to get back on the trail. 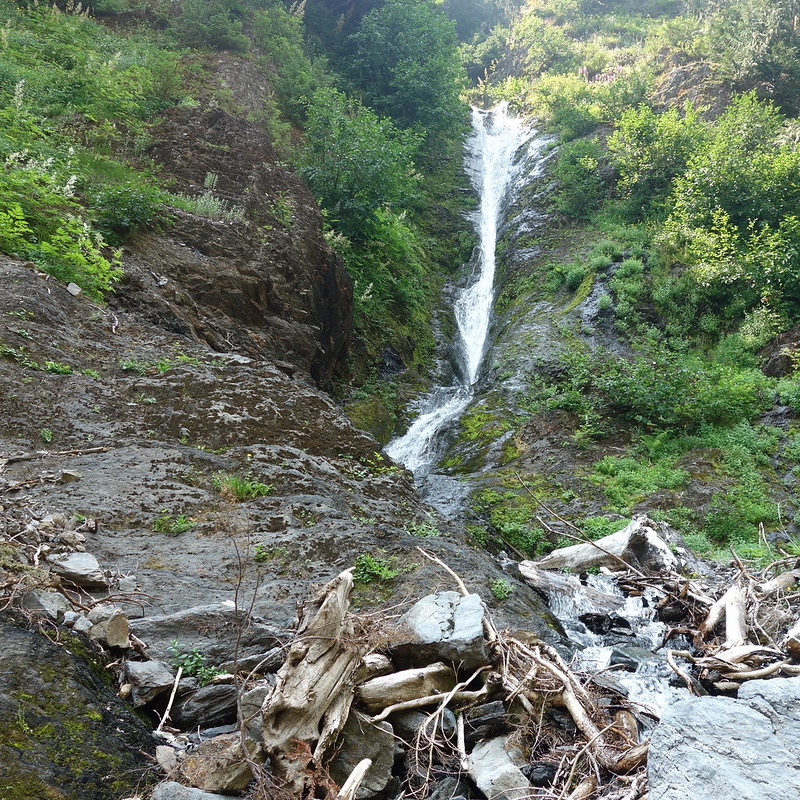 The opposite wall is a convoluted cliff of stone, scree, and scrubby brushes, precariously clinging to thin soil. There doesn’t seem to be an obvious way up, and for a second I just lose it. Tear up. I don’t think I can climb back up the side I just came down, and if the other bank is undoable, how can I get out? There’s a waterfall just downstream, so I can’t follow this down the North Fork. Shit.

This, I think, is what a bad situation looks like.

“Okay,” I whisper to myself. “You just have to climb back up.” I think of being a kid, climbing around the crumbling banks of the streams in the woods behind my parents’ house. “Nothing has to hold you for long. Just go fast.”

I lash my poles to my pack, put on my gloves so that I don’t have to worry about thorns, and, as fast as I can, start climbing and crawling up the hill. Nothing feels stable—every step slides back and every bush feels almost ready to come out of the ground—but I hold my breath and just go.

And before I know it, my hand hits flat ground, and I pull myself up, onto the trail.

I sit on the trail for a while, legs dangling down the slope I just climbed. I have absolutely no idea how I just did that. It just happened. But I hope it’s the last crossing like this. There’s no way I can retrace my steps.

I’m nervous and shaky for the rest of the climb up to Skyline Ridge, but the hard part’s over, at least for today, and soon the trail reaches another plateau, this one a broad band leading gently up to the ridge, and Beauty Pass. I finally start to breathe normally, and look back the way I’ve come. 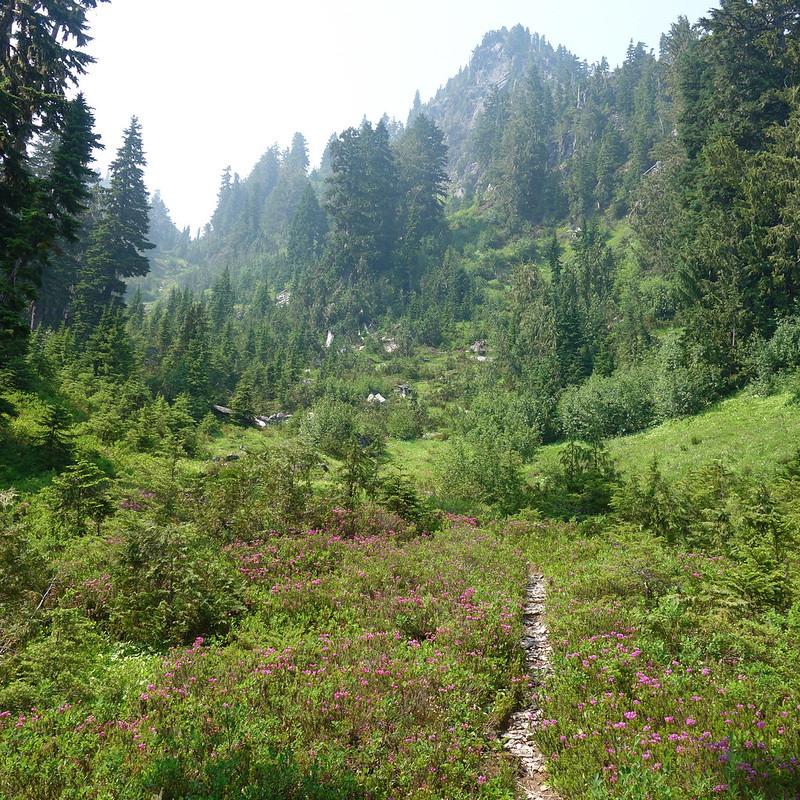 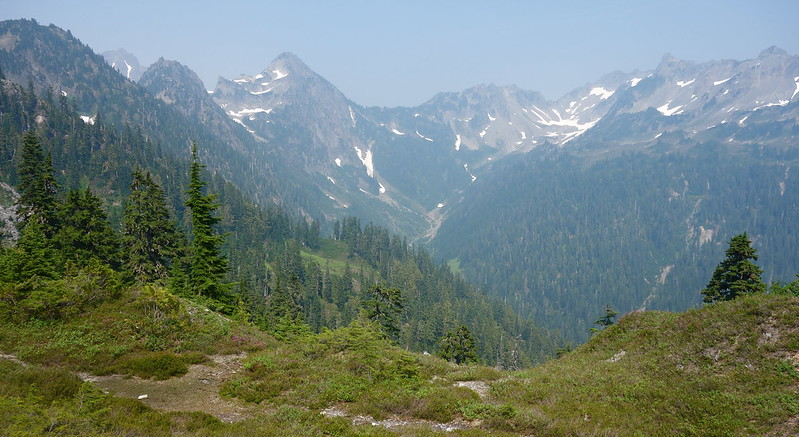 There’s water everywhere, fresh from melting snow a few hundred feet above, so I stop to drink a few liters, and eat a very late lunch, trying to settle down. 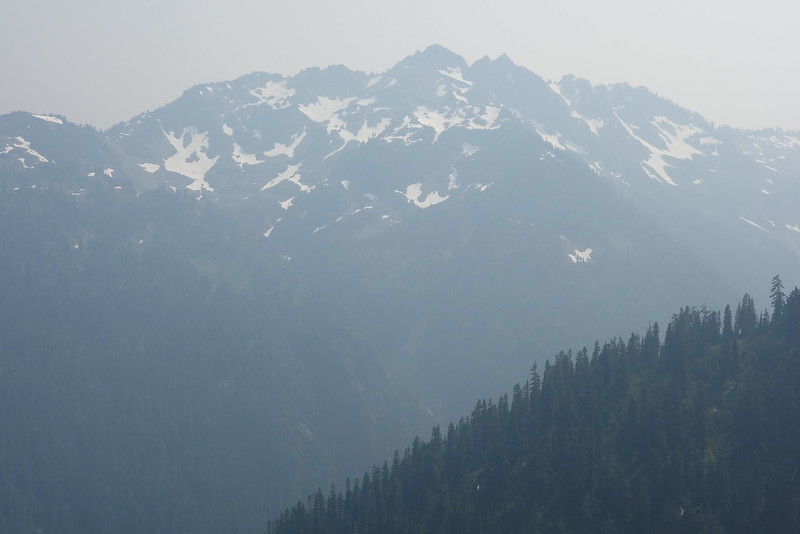 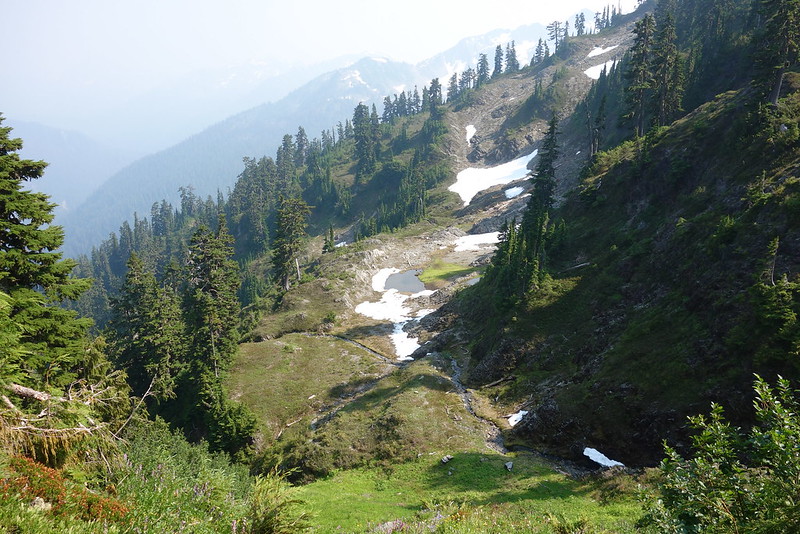 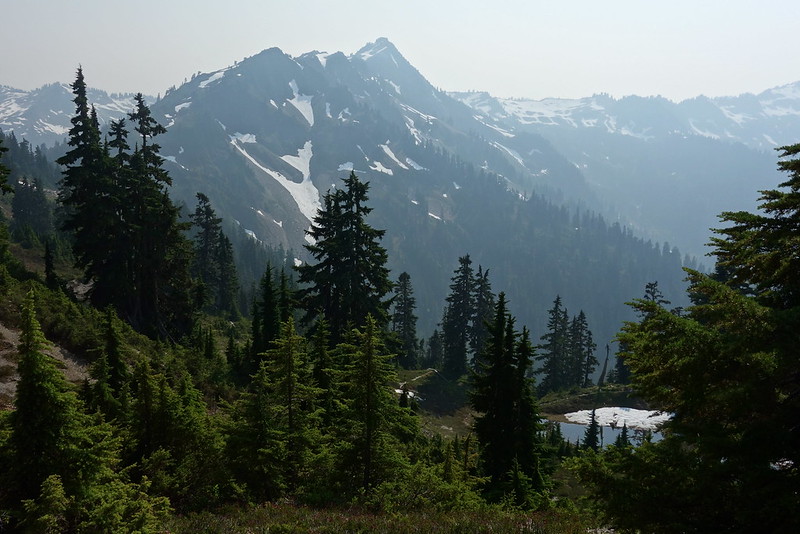 Soon, I reach Beauty Pass, and drop, for the first and last time this trip, into the Queets, to Lake Beauty, my home for the night. 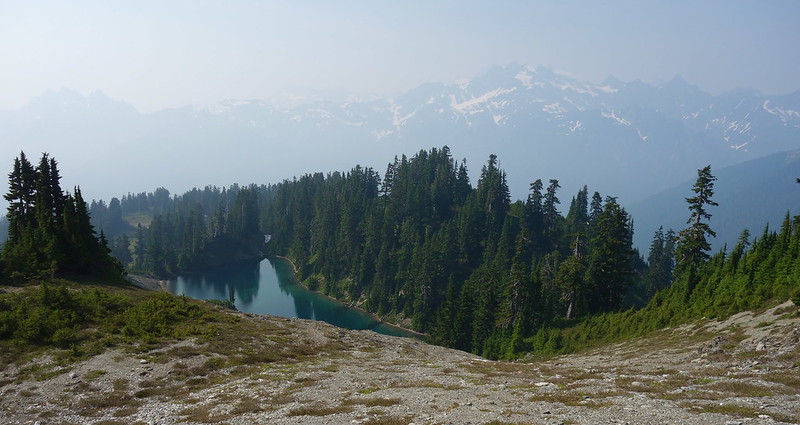 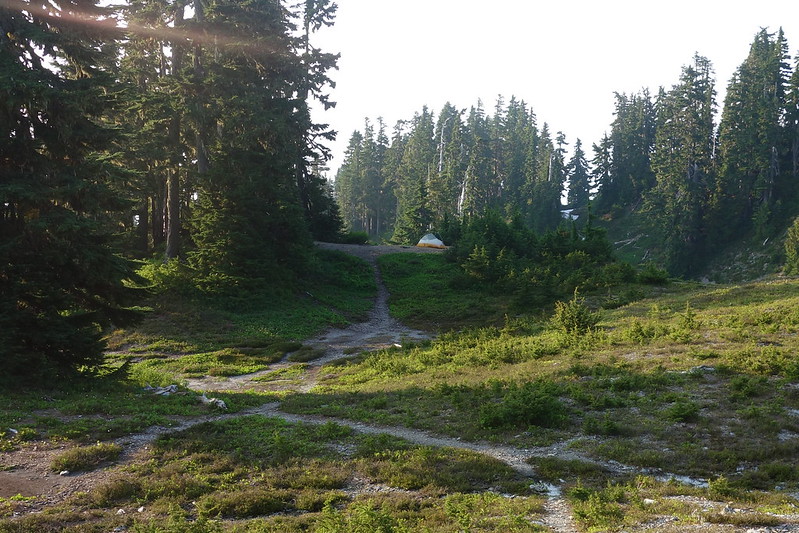 I feel like I’ve been walking all day, but it’s only five-thirty, so I walk down to the water for a swim. The lake’s crystal clear and cold. I jump in, let myself float to the other side, sit in the shallows, drinking liters and liters of water. Sitting on the shore, in the sand, I feel like I’m coming back to life.

The light starts to dim and I make myself dinner, running back and forth from the bugs, drinking some bourbon. It’s so beautiful here. 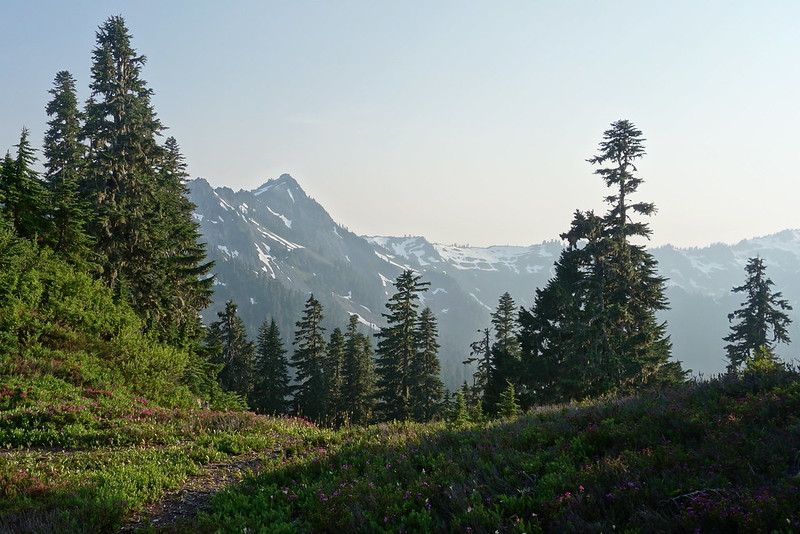 The smoke descends back into the valleys, and I watch the sunset on Mt. Olympus, just across the Queets. I turn in early, but still stare out, as the minor peaks around Olympus turn red. 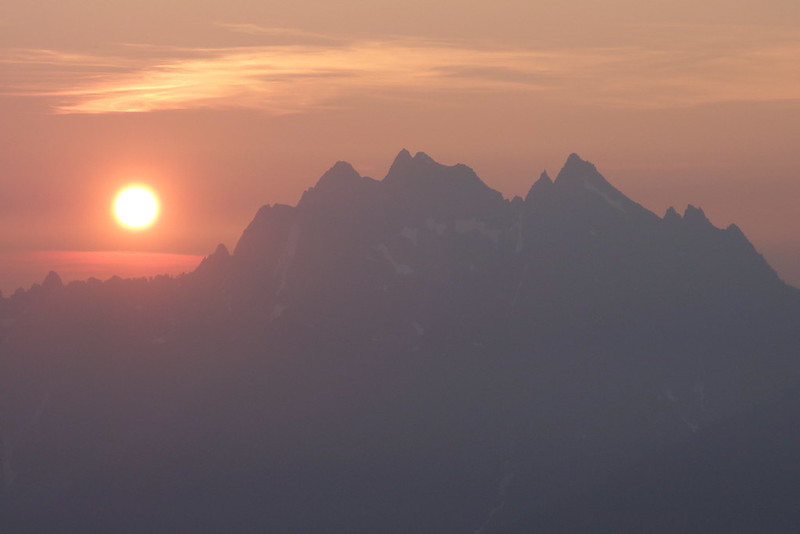 No howls tonight, but as the stars start to appear and the mountain becomes a vague outline of glowing stone and snow, I think to myself, “here I am.” And I’m happy, very simply happy, to be here, to have made it here.