I wake in the hazy still-grey morning to the strange feeling of being surrounded—not watched, exactly, and certainly not claustrophobic, but as though the world is a little closer than usual.

I look out the open netting of my tent to see maybe thirty elk, all around me on the broad sandy bar along the river where I slept last night. A few see me stir too, but none seem afraid. They just seem to regard me as another aspect of the scenery, no more threatening than the rocks or river rubble.

We often see groups of animals all doing the same thing: grazing or running or resting, all as one. It makes it easy to view them as groups, not as collections of individuals. But here, all the elk are up to different things: some amble listlessly around the edges, some nibble on the occasional tuft of grass, and some sit with their legs folded underneath, like giant cats. It’s impossible to see them as a monolithic group. They’re a set of particulars, all with their own directions. One sniffs at the side of the river before dunking its snout and drinking. Another looks lackadaisically up at the treetops. Still another pokes at the bushes, taking little bites here and there.

I watch them breathing and walking, eating and drinking and resting, and feel an overwhelming recognition of these things as fellow creatures, the centers of their own worlds, and of lives as complex and varied as my own. One seems to take great satisfaction in chewing, another seems to play in the water. I feel such an affection for them. I wonder about their winters and summers, their births and deaths. Their parents and children.

I take it that the beginning, and perhaps also the fundamental point, of most moral thought is the realization that other people are essentially like ourselves, with their own pleasures and pains, plans and regrets, attachments, treasures, and tragedies. What does it mean to see these animals as fellow creatures too, to feel a sort of entangled empathy for them, to care about the courses of their lives and their places in the world we share?

John Muir famously wrote about the irreducible connection of everything in nature with everything else:

When we try to pick out anything by itself, we find it hitched to everything else in the universe. One fancies a heart like our own must be beating in every crystal and cell, and we feel like stopping to speak to the plants and animals as friendly fellow-mountaineers.

I wonder, but also I just watch, and start to cry. For a long time we sit like this—the elk on their way, me on mine—fellow creatures, together along the river.

My friends eventually drift away, casually, up into the wooded banks above, then across the river and into the hills. I watch the last of them go, then pack up and set out, finally, to the Elwha’s upper reaches.

There are two crossings of the river before one reaches the headwaters, and I’ve been nervous—I am, after all, much less nimble than an elk—but both have makeshift bridges, and I spend the morning happily wandering up, watching the river revert to a series of small streams. 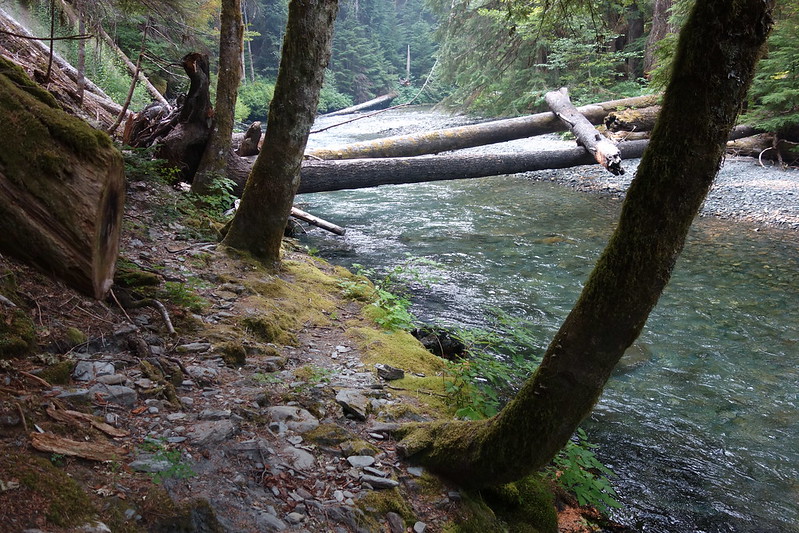 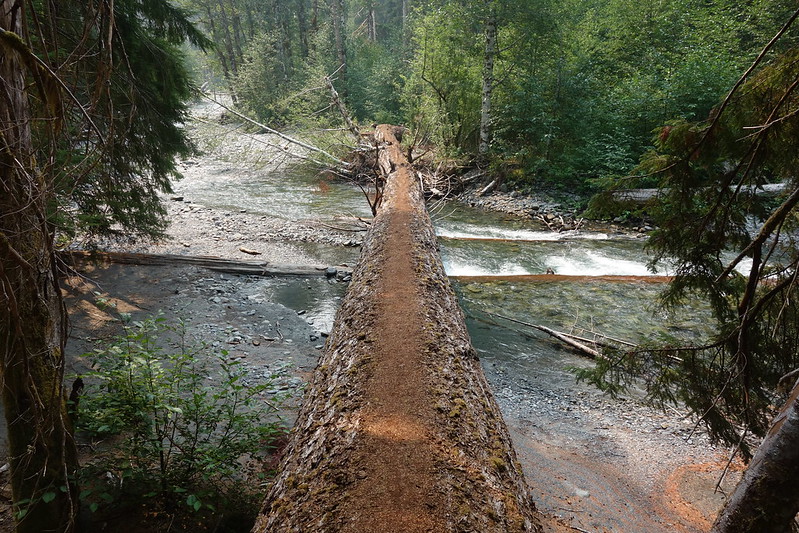 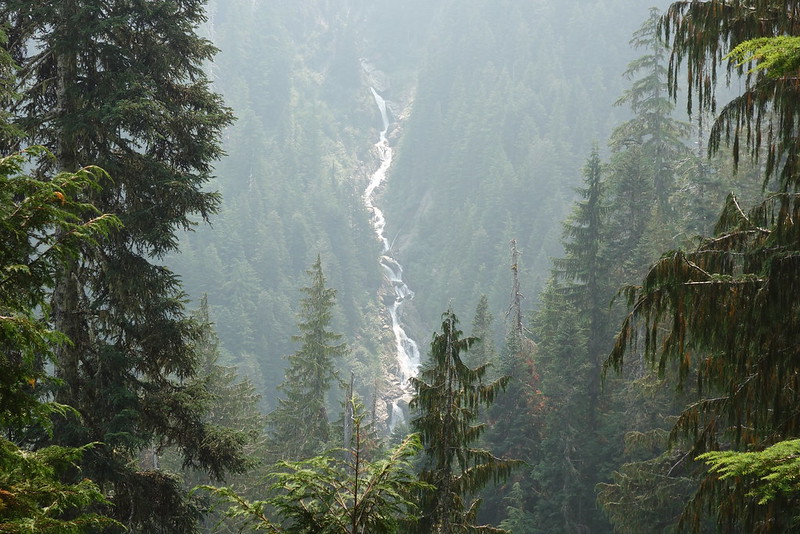 The trail degrades a bit toward the end of the drainage—this is rarely visited country, near the center of the park—but it’s all still passable with a bit of care, and soon I’m at Low Divide, walking along the lily ponds from which one fork of the Elwha springs. 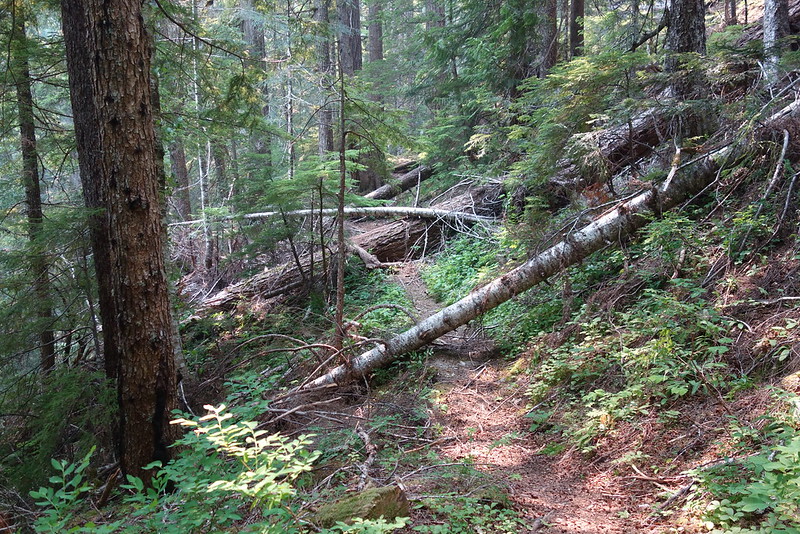 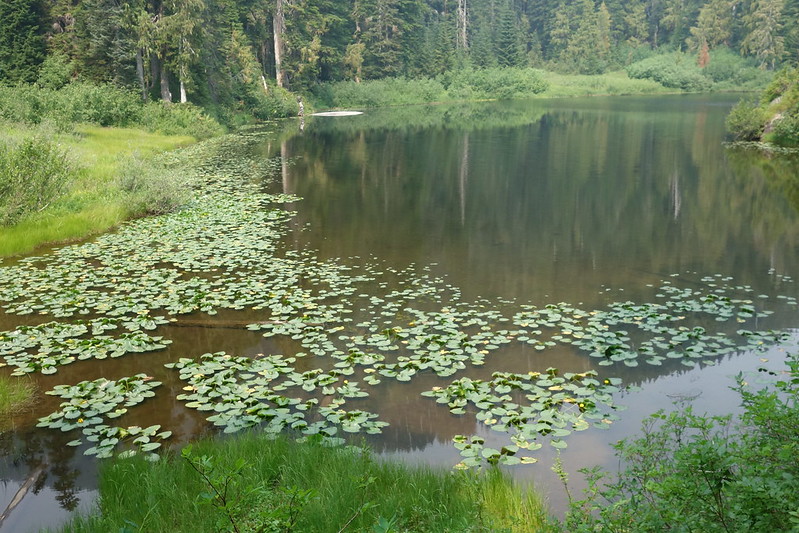 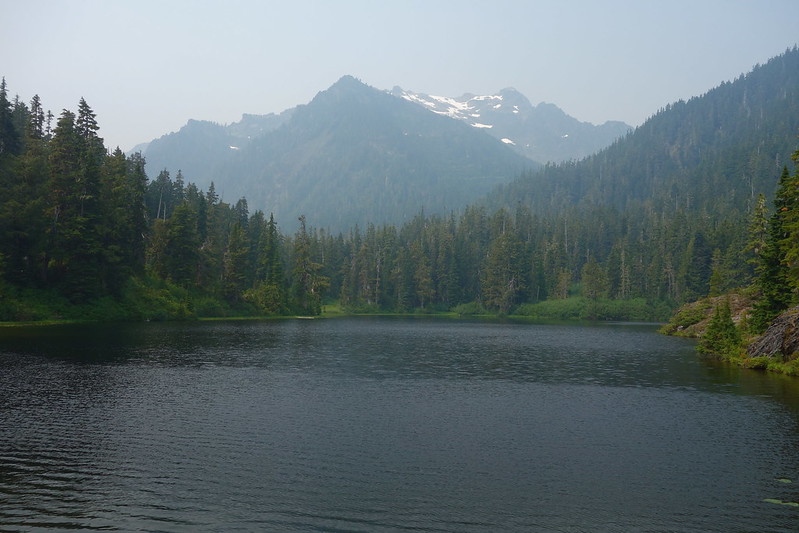 It’s still early, so I decide to head up to Martin’s Park—a collection of tiny lakes, set improbably in the center of a small ridge on the northern shoulder of Mt. Christie.

The trail ascends steeply at first, through a marshy basin where it’s often indistinguishable from the countless snowmelt streams that run down through overgrown grass. Then, improbably, it runs up an old riverbed ravine, climbing through boulders and blowdown to a heather-filled meadow, still half covered by an old avalanche. 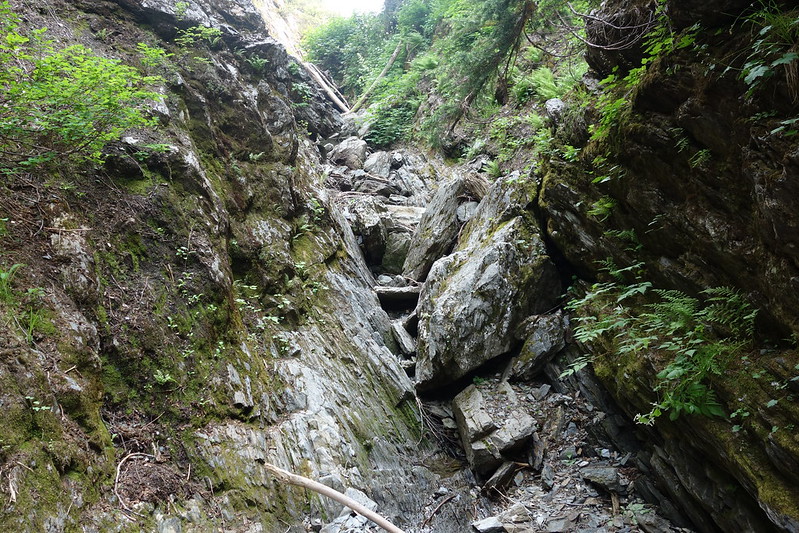 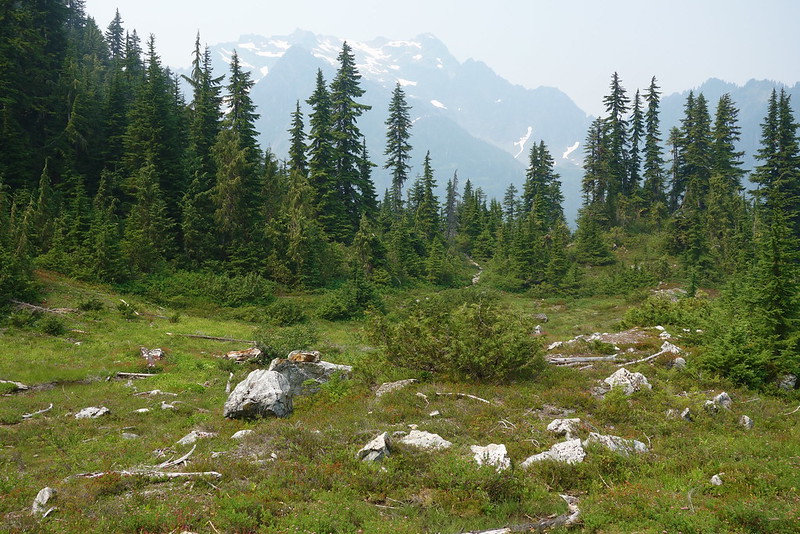 Past the first meadow, the trail climbs again, now along a minor tributary of the Elwha to another clearing, this one just under the Christie Glacier. Several waterfalls fall down a snow-polished wall, into tiny pools littered with the matchstick remains of trees. 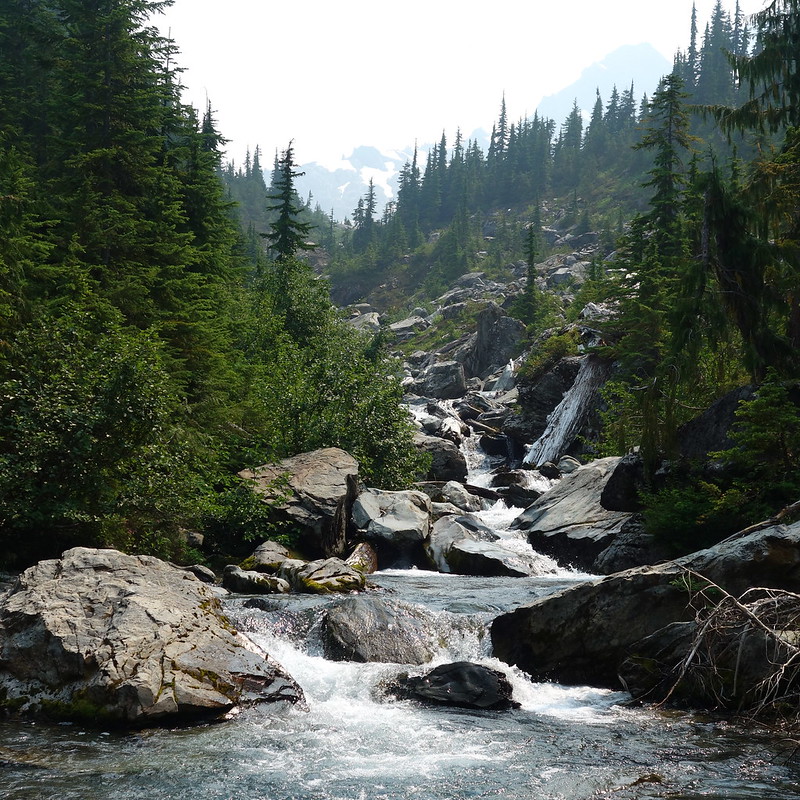 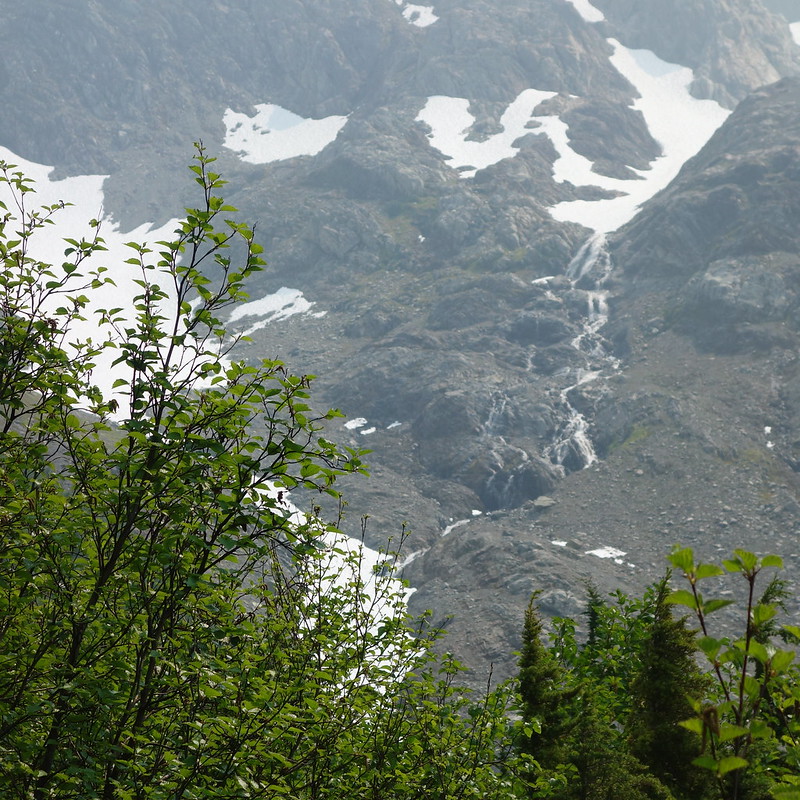 The last climb, into Martin’s Park proper, is an easy, switchbacking affair. I lose the trail for a little—there are several paths, none of which seem primarily human—but map and compass it up the right way up, and setup camp. It’s so rarely visited here that even the “official” campsites—or, at least, the ones mentioned in all the guidebooks—are thickly overgrown with grass and heather. 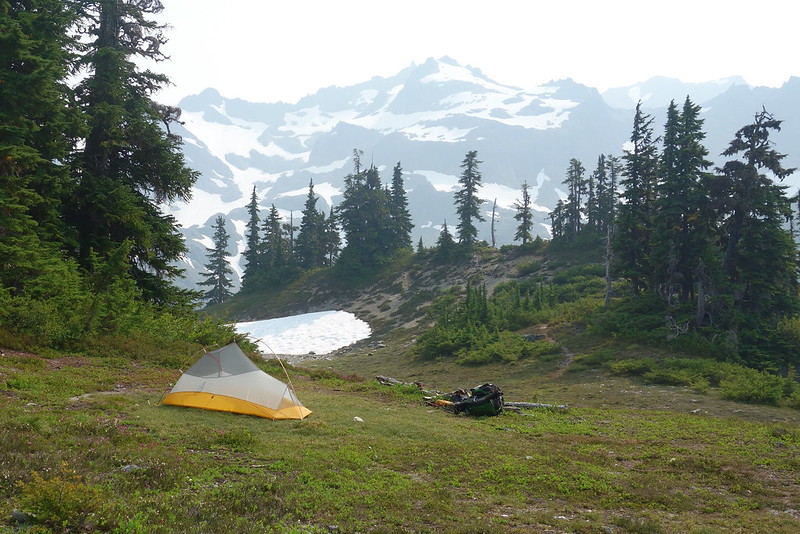 I go for a swim in the larger of the two lakes, wearing all my clothes. I swim out to the center, float on my back. The sky is smoky, but the water smells like melting snow, like winter gloves at the end of a long day sledding. I breath in deeply, and think of my brother, and my mom and dad, of the days when we used to go cut Christmas trees on Mt. Hood in the snow. Then I smell the flowers, faint in the thick, humid air, and I think of Krista. She bought a perfume to smell like the woods, blooming lupine and pine. I watch the wind across the water, small waves and shifting sun shadows. It all feels almost holy. 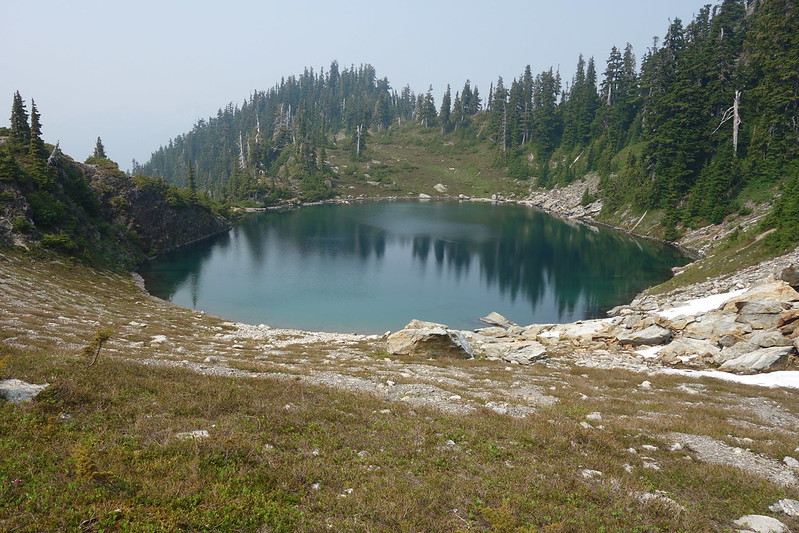 I climb out, and lie down to dry at the edge of a cliff that overlooks the Elwha. Across the way, the Elwha Snowfinger crumbles down, a slow-motion cascade between alpine ice and old growth. The Bailey Range beyond could be confused for a cloud, but for the rare, rust-black rock between shock-white snow. And closer at hand, I’m circled by a seemingly unbroken band of peaks: Seattle and Christie and half a dozen spires that someone surely must have named. 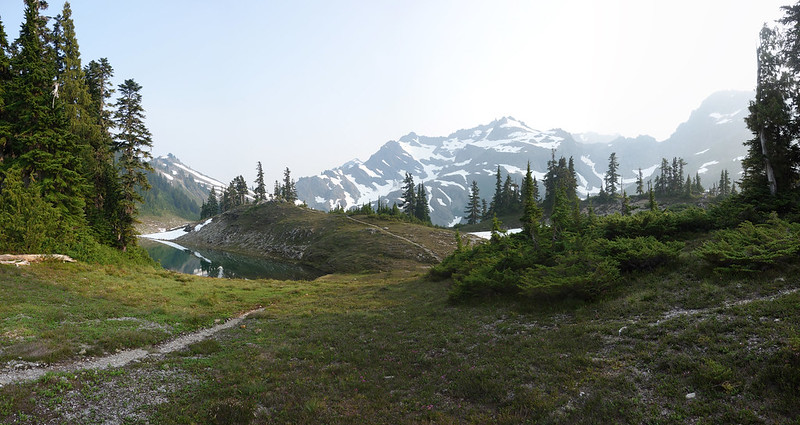 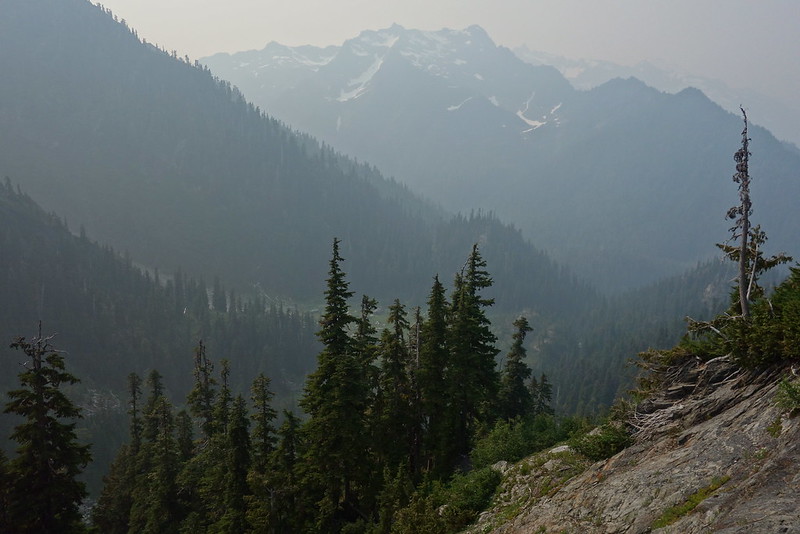 Two hawks circle above the lower basin, but otherwise the scene is wholly still. There’s no one for miles. Time changes. It smooths and slows, moves away from me to synchronize with moss, or melting ice.

The whole range—really: the whole jumble of ranges, all the rivers and valleys, the peaks and ponds, the endless ridges that reach the horizon—feels focused here, as light through a lens, a craggy confusion towering above and inside me, overlapped and overwhelming.

I’m not religious, of course. And I’m not sure I believe in any order, unseen or otherwise. But I feel right here, at home, part of the rivers and rocks, among my fellow creatures. I feel full here.

I think of a passage from Bede Griffiths, which I almost—but just almost—have memorized:

One day during my last term at school I walked out alone in the evening and heard the birds singing in that full chorus of song, which can only be heard at that time of year at dawn or sunset. I remember now the shock of surprised with which the sound broke on my ears. It seemed to me that I had never heard the birds singing before and I wondered whether they sang like this all year round and I never noticed it. As I walked I came upon some hawthorn trees in full bloom and again I thought that I had never seen such a sight or experienced such sweetness before… I came then to where the sun was setting over the playing fields. A lark rose suddenly from the ground beside the tree where I was standing and poured out its song above my head, and then sank still singing to rest. Everything then grew still as the sunset faded and the veil of dusk began to cover the earth. I remember now the feeling of awe which came over me. I felt inclined to kneel on the ground, as though I had been standing in the presence of an angel; and I hardly dared to look on the face of the sky, because it seemed as though it was but a veil before the face of God.

The light and heat fade, and I take an evening walk in the water, all the way around the shallows of the smaller lake. There are frogs everywhere: swimming, on the shore, leaping in the grass. 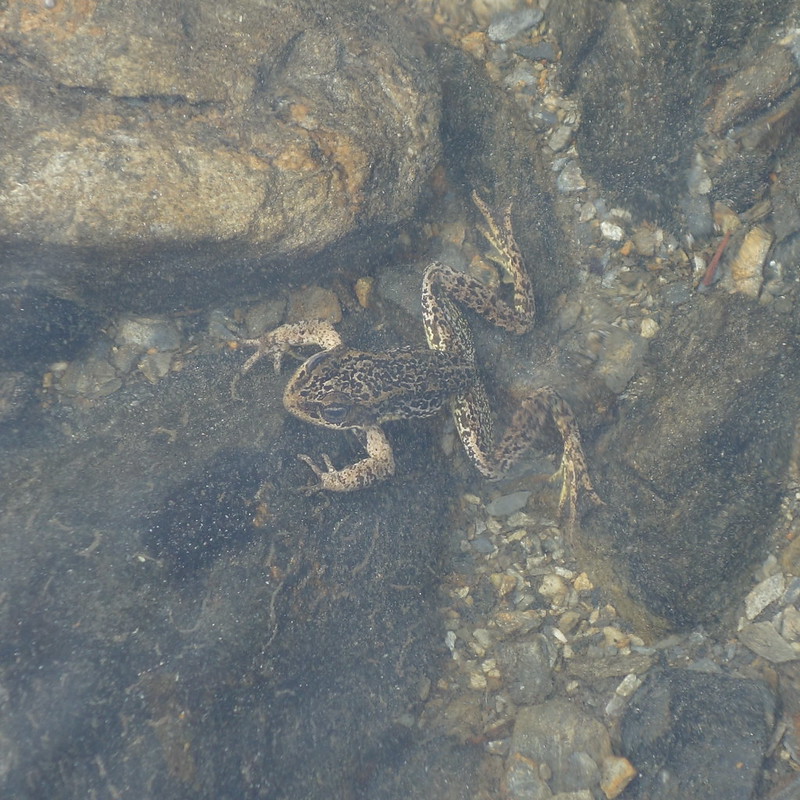 And I remember two things at once. The first is my dad, maybe a decade ago, not far from here, in Grand Valley. One of the upper lakes was absolutely full of tadpoles, in every imaginable configuration, from brand new fish to things not too far removed from frogs. We walked around slowly, watching, together, the strangeness of growing up.

The second is just a few years ago, with Krista, on the shore of Little Three Creek Lake in Oregon, before the fire there. There were thousands of frogs everywhere, covering every surface. She didn’t want to hurt any of them, so we had to walk carefully, tapping the ground with our toes before taking a step. 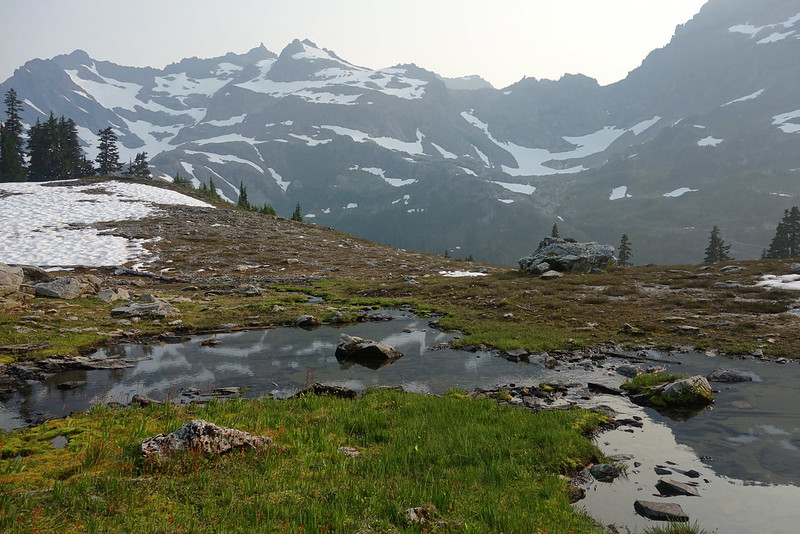 One thought on “Across the Olympics, Day 9: Fellow Creatures”