I have this memory of Krista and I in college, maybe sophomore year, the year we became friends, riding the then-new streetcar. We’d been shooting bubble tea pearls at each other with those wide straws they give you. I was out of ammo, but she had a couple left, saving them until we got enough. I remember her looking down at her cup, then back up at me. Like: “You have no idea what’s coming.”

It’s funny to sit here this morning, eating oatmeal in the shadows of these hills I’ve spent so long dreaming about, staring at Krista, and seeing two things at once: that girl shooting bubble tea pearls at me on a sunny day when I was 18; and us, here, a couple years ago, deciding to keep going despite the smoke. 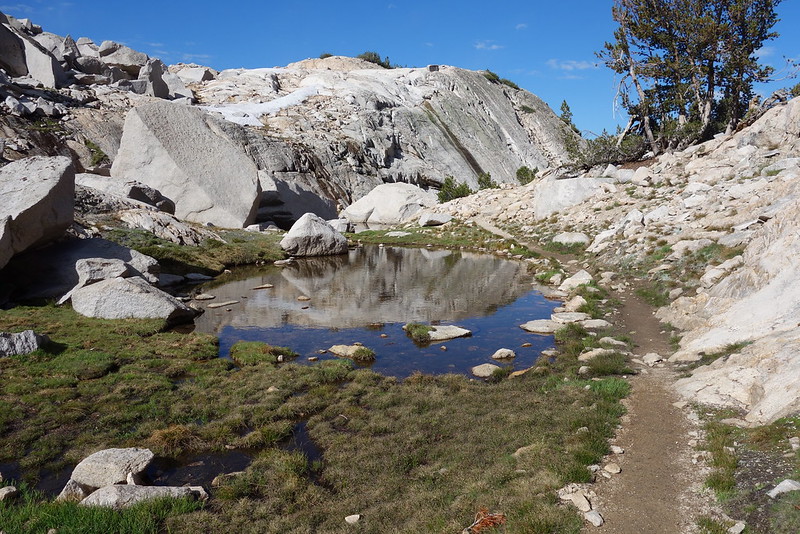 I reach out for her hand, and again, she doesn’t ask for an explanation.

The way up Glen Pass is astonishingly beautiful. We can see the South Fork stretch further and further west the higher we climb. And the mountains! The Great Western Divide’s in the distance, nearly the whole horizon, a series of steep snowy peaks that seems, from here, completely impassable. 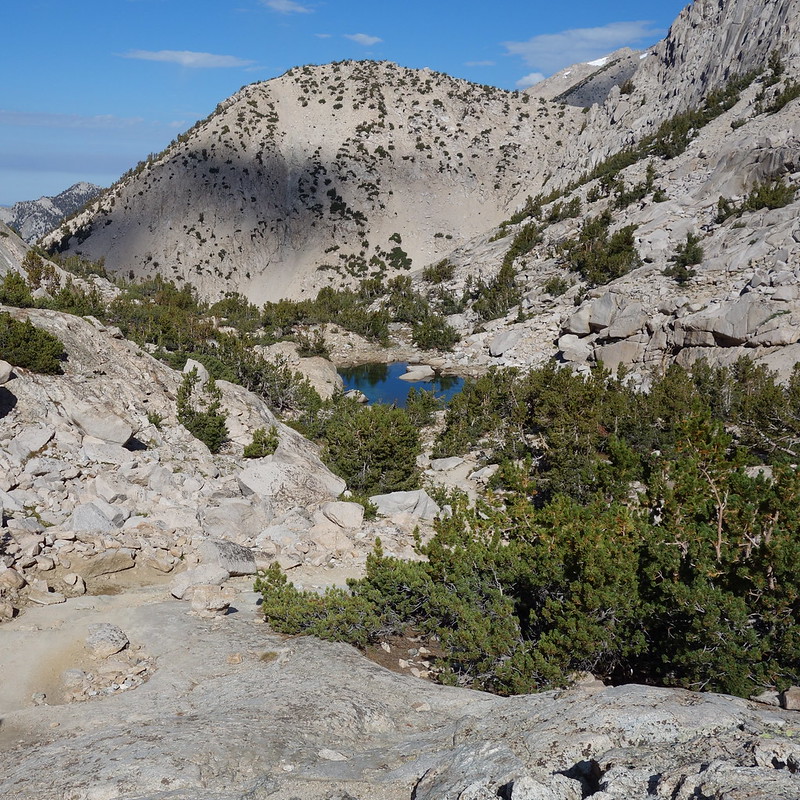 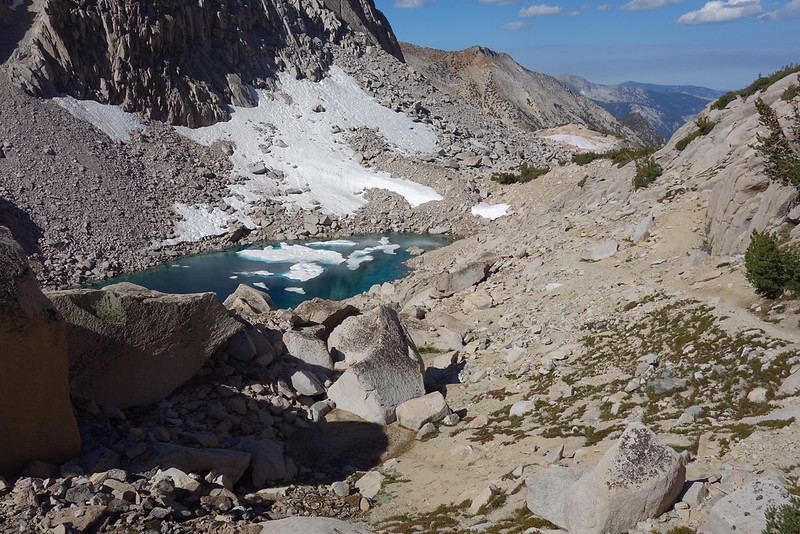 We pass a dozen lakes, some marked on our map, some just flooded flats from the year’s deep snow. There’s deep water and icebergs where before there’d been only dry soil. Flowers still bloom on the shores of every lake and the sides of every creek. 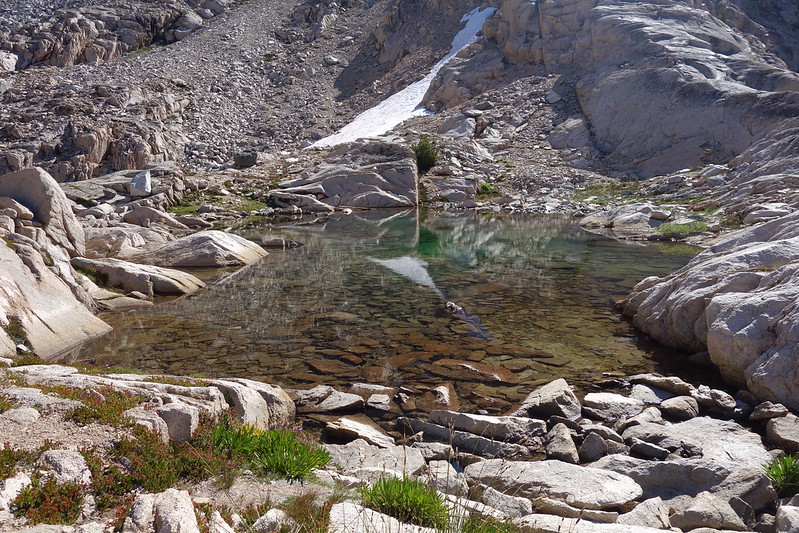 The trail itself is a little worse for wear after the wet winter, but nothing scary, and we happily switchback up to the pass, eating Snickers on the way. 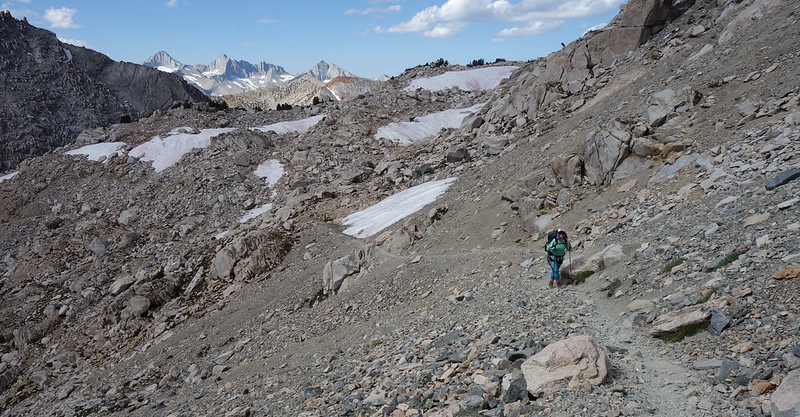 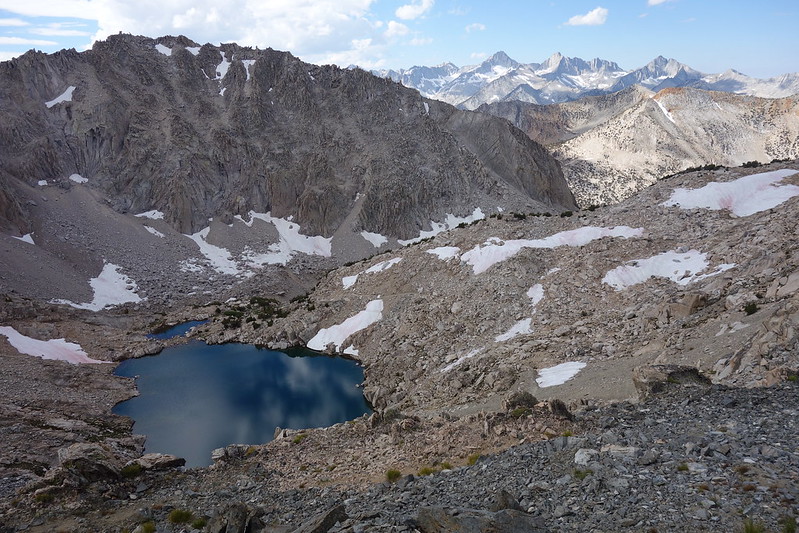 The view north from the pass is another revelation. The Rae Lakes arch off screen, Woods Creek tumbles down its steep canyon, and all around more mountains stretch to the horizon. No smoke anywhere. 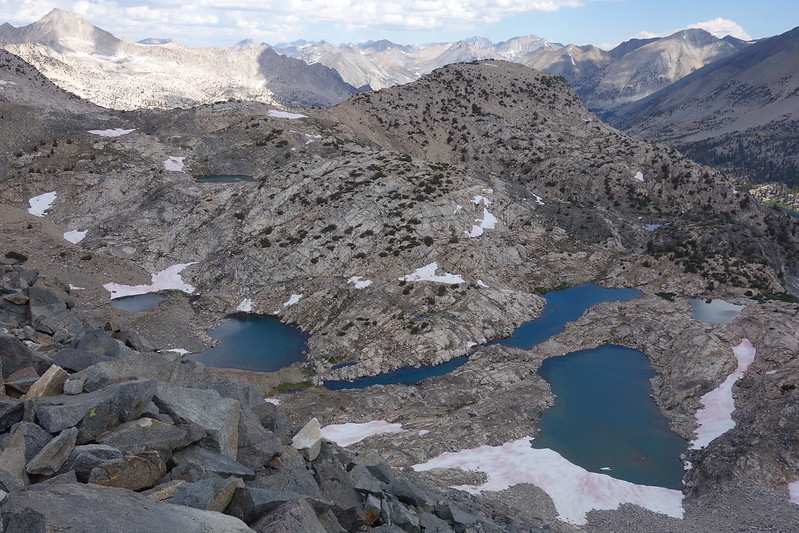 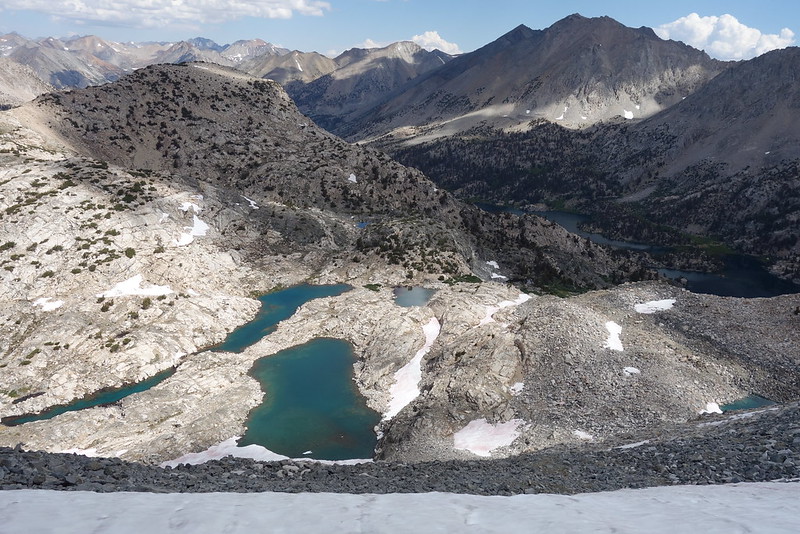 There’s a bit of snow on the descent, some of which requires a little fancy dancing to get through safely. More worrisome, though, is the tower of clouds that’s begun to build behind us—a solid grey-black wall. I’m not normally afraid of weather, but the weather here is… different. I guess storms here spend several days building before breaking, and the slight rain yesterday certainly wasn’t it for this system. 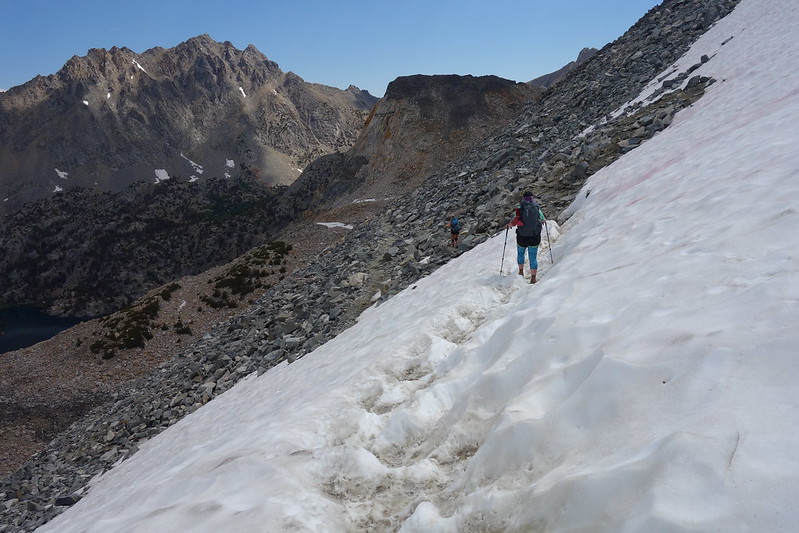 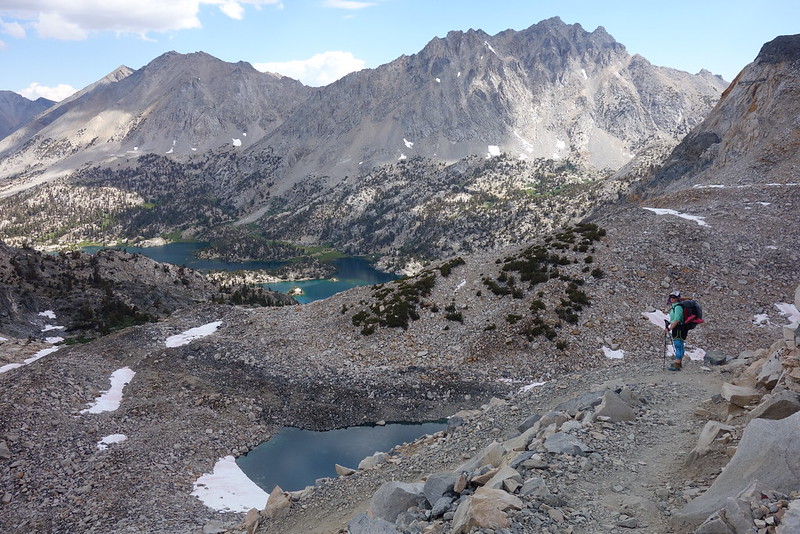 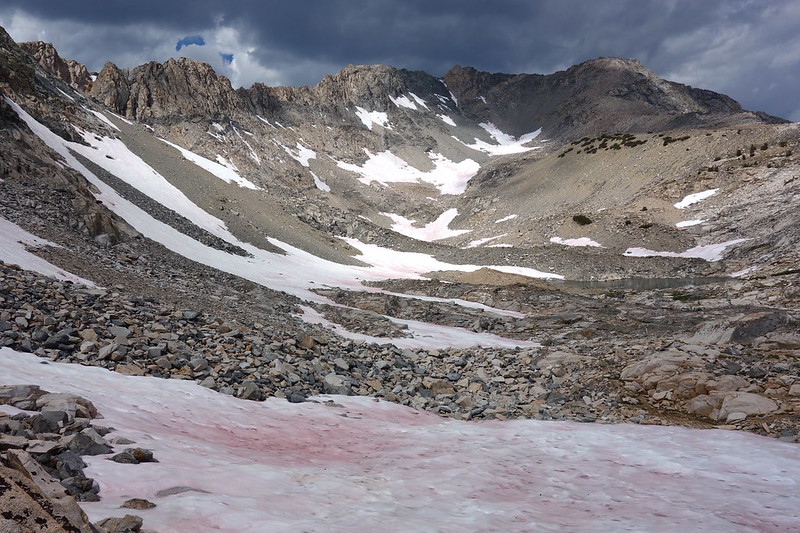 So we hurry down the pass as it starts to storm behind us. We’ve only gone a couple miles today, but between the gorgeousness of the Rae Lakes and the unwelcoming storm, we decide to stop, at least for a couple hours, and set up to stay dry. 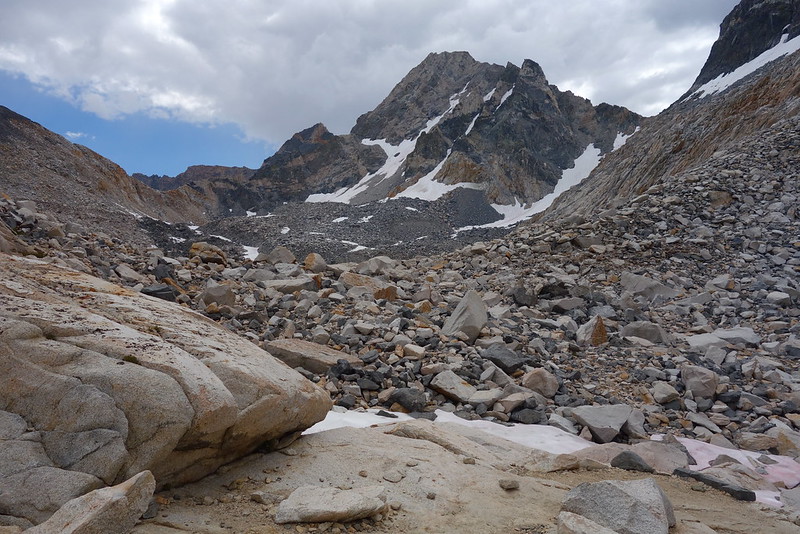 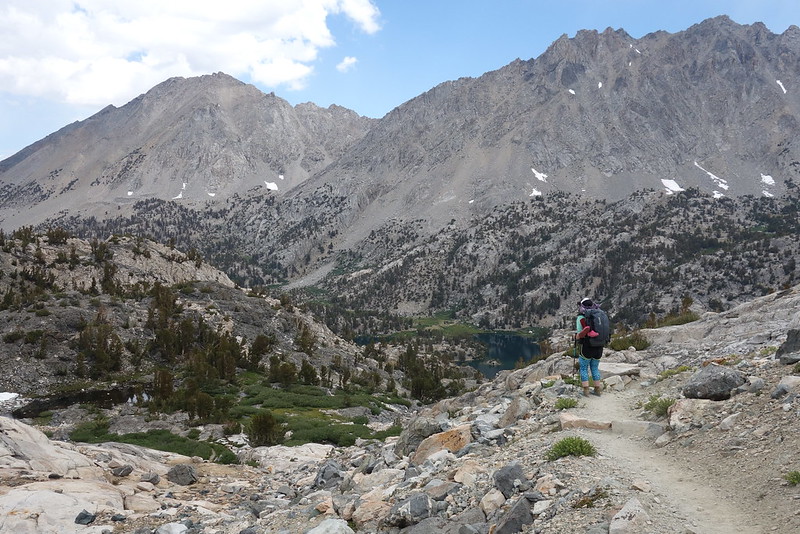 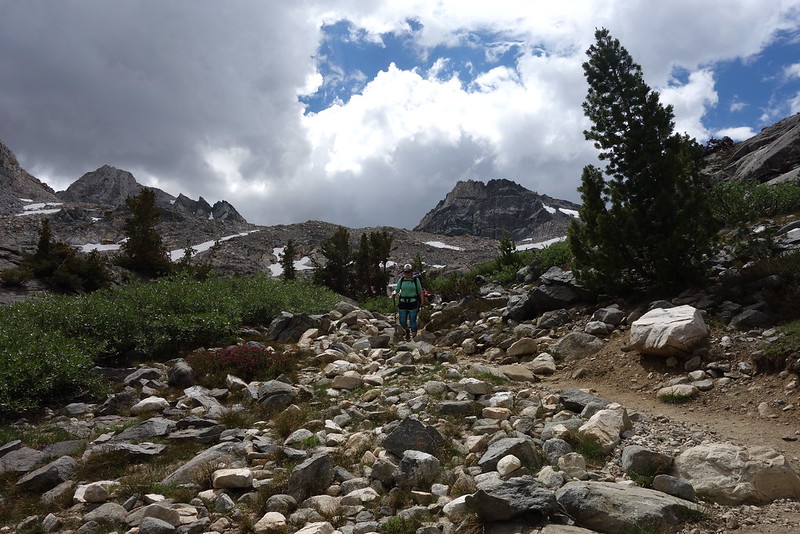 The lakes are already crowded with campers, corralled all along the trail corridor. But just half a mile off the main way, we find a lonely bluff with the most beautiful view of the lakes. This is, we realize, the secret about the Sierra: the PCT is packed, but as soon as you leave, there’s solitude. There are miles of untrodden trails, and miles more of untrailed wilderness. 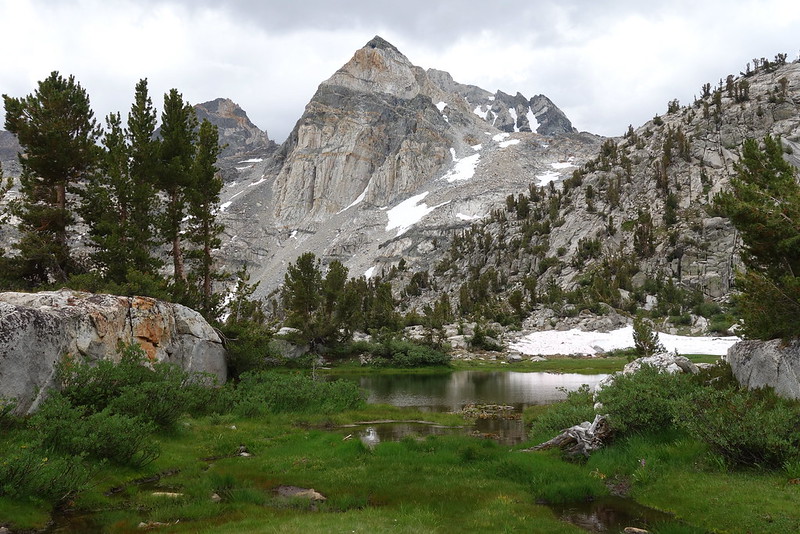 The storm comes fast, all at once: first thunder and lightning and torrential rain and wind. I’m a little nervous about our new tent, but it holds things off beautifully, and we sit in almost preposterous comfort as wind wails outside. I look out for a moment and see white caps on the lake.

It feels strange to be so happy here, laughing in the tent as whatever rages outside. I look at Krista. She’s smiling. There are small lines in the corners of her eyes that didn’t used to be there. But then, I used to have hair. She took a picture of me on that day with the bubble tea. I look like freaking Farrah Fawcett.

I guess we’re getting old together. Those lines will get more pronounced. My hairline will recede so far that it’ll need to be measured in imaginary numbers. And weirdly, I’m okay with that. The beatifically unmagnificent lives of adults.

The storm fades slowly, like a chord decaying out into echoing silence. The last sound on Abbey Road. And we stumble out into the crisp late afternoon air.

There’s still some sunlight left, so we walk up a few miles into the Sixty Lakes Basin, a long, thin valley nestled under jagged peaks thousands of feet above. At the pass above the Basin, we stop, and look back, down at the Rae Lakes and across, at the sun setting on the main Sierra Crest. Krista seems to be in a standoff with the horizon. 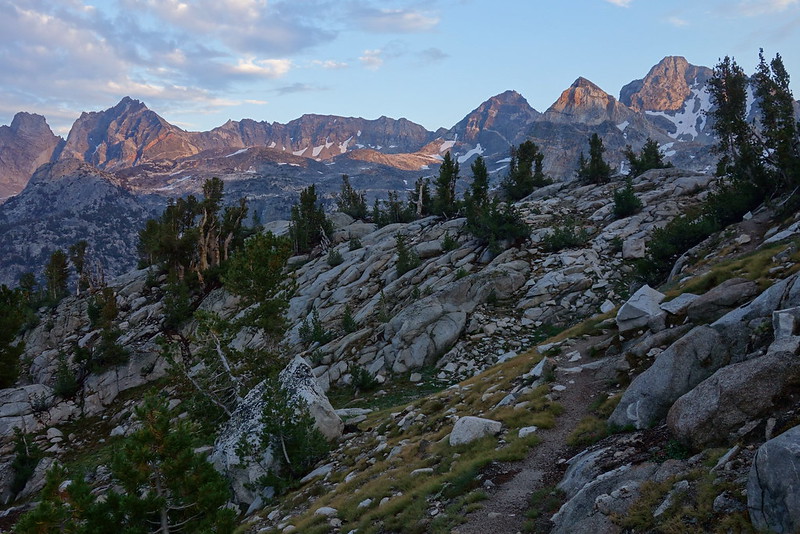 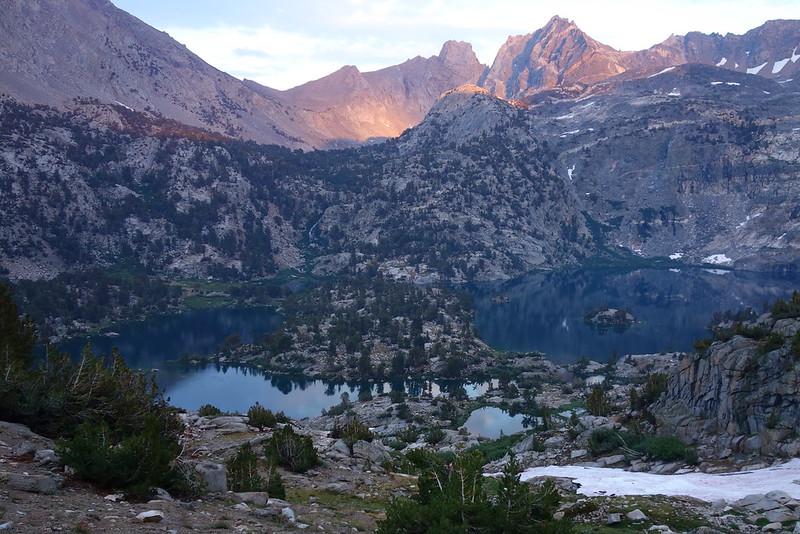 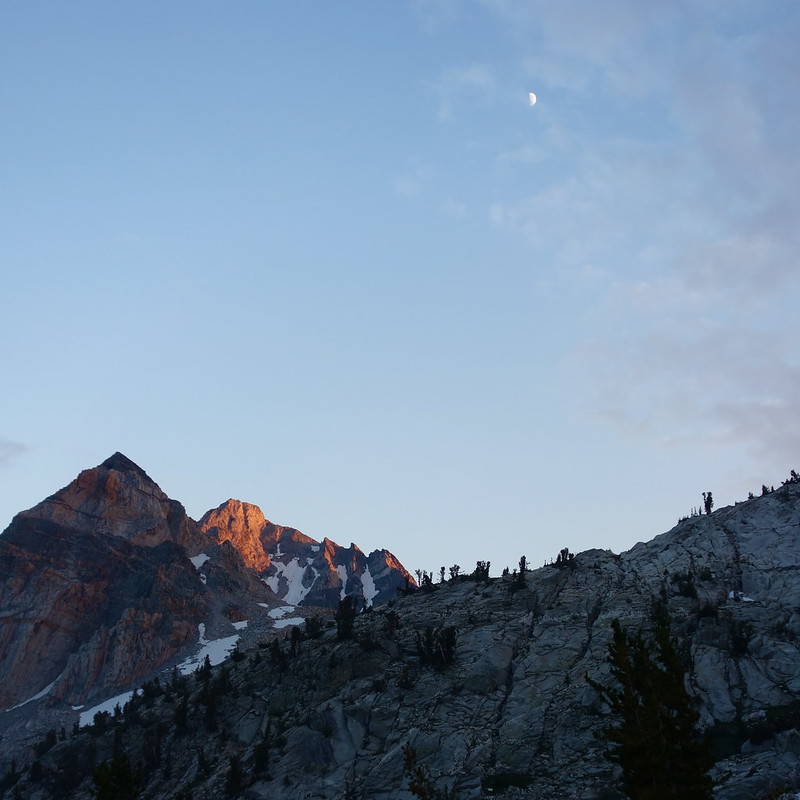