We pack up in a blur: breakfast and bear barrels and the heaviest bags either of us have ever carried, all in a haze of excitement and fear.

Then off. At the trailhead, there’s a small group of Trail Bros. Half talk at their GoPros: “August 28, 7:38 AM. The epic adventure begins.” Half look at us plaintively, sincerely sorry about all of this.

The first few switchbacks are harder than they should be, like a replay of last time. Molasses miles. But we somehow flow upward, up into the National Forest and the land of lakes and light white spires of granite. 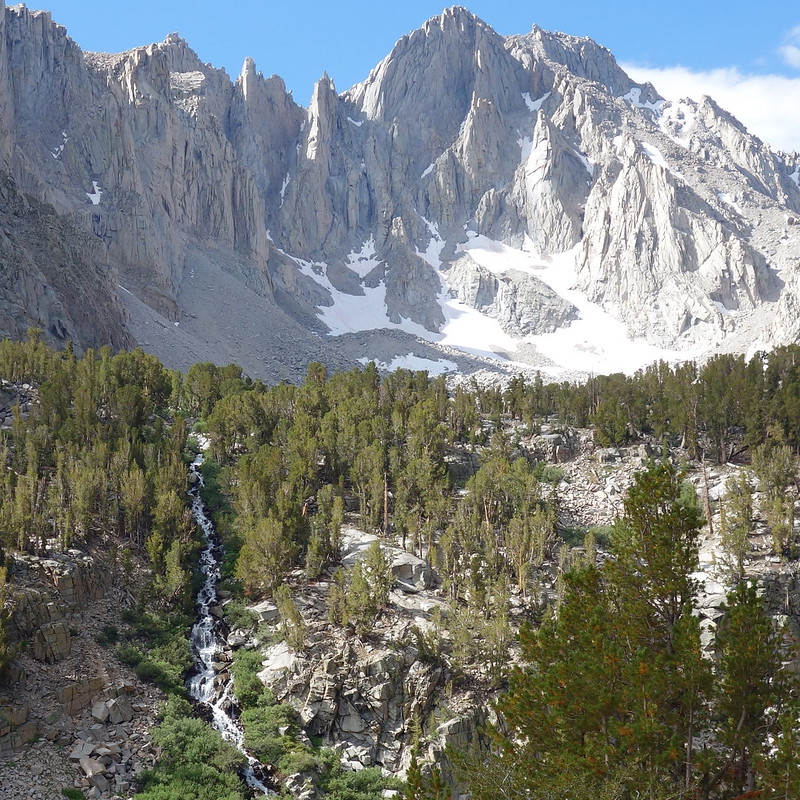 And it’s lush. The last time we were here, almost exactly two years ago today, this was all brown and blown dry. But now there’s rain and everything’s green. Waterfalls flow from every ridge as far as we can see. Every lake’s overflowing its banks. There’s marsh where there’d been dusty sand. 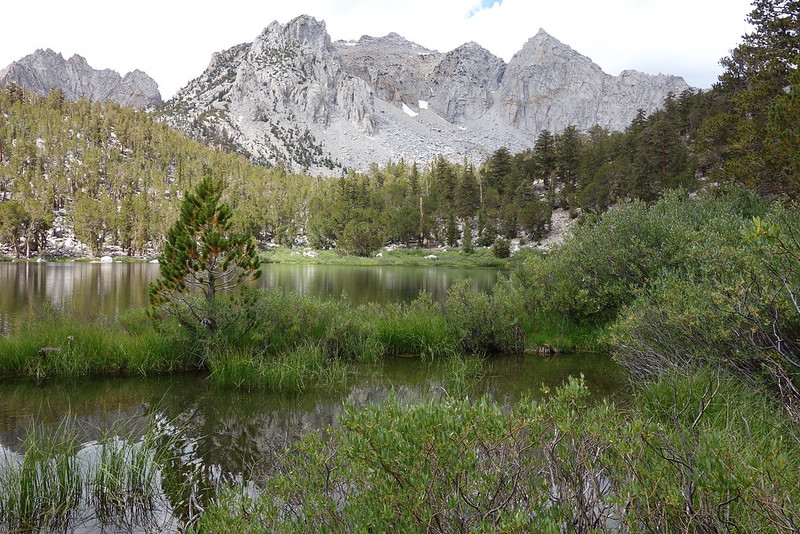 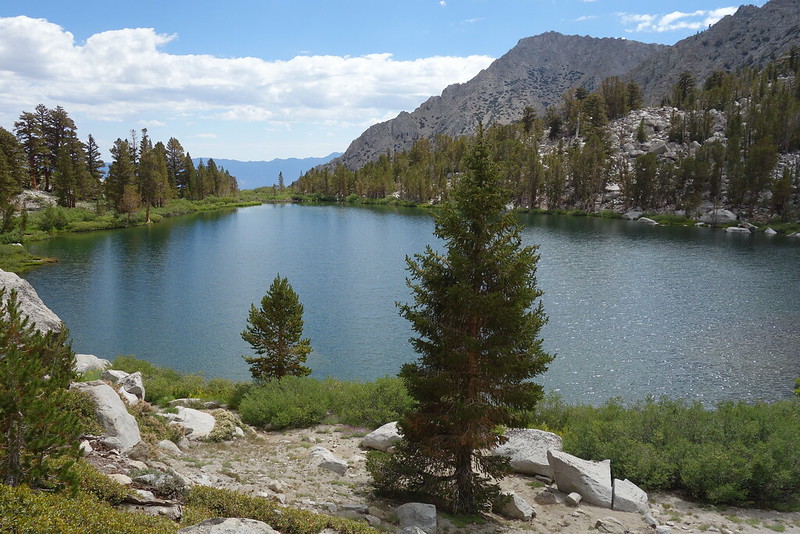 We stop at Gilbert Lake and again at Flower. No reason to rush. A group of eight older guys amble up as I’m sitting on the shore, filtering water and looking at my map. One sets down his 85-liter pack, looks concerned, and asks if I’m lost. I laugh unintentionally. There’s literally no way anyone could be lost here. “No, I was just…” What exactly was I just doing? “Matching places to names.” There’s a moment of awkward silence until he figures out another way to be, uh, helpful. “You know there’s another way to filter…” I stop listening. 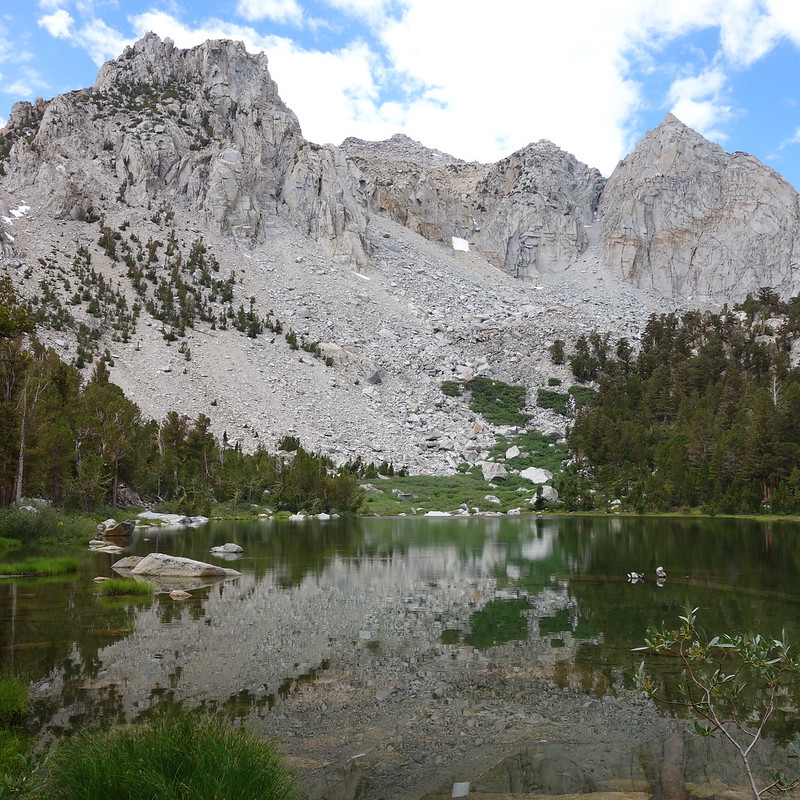 In the distance, three women with tiny packs speed by, and one yells out to me. “I love your gaiters! Dirty Girls for life!” I shout out a thank you.

The old men leave, and we have to the lake to ourselves. Tiny trout swim in the shallows. Birds—dippers?—splash along the opposite shore. Above, every fold in the granite is full of snow, shining white against the sky’s blue and grey.

The trail oscillates between switchbacking steep climbs and long, smooth benches. Glacial steps. It rains off and on as we approach the pass, but nothing to worry about. 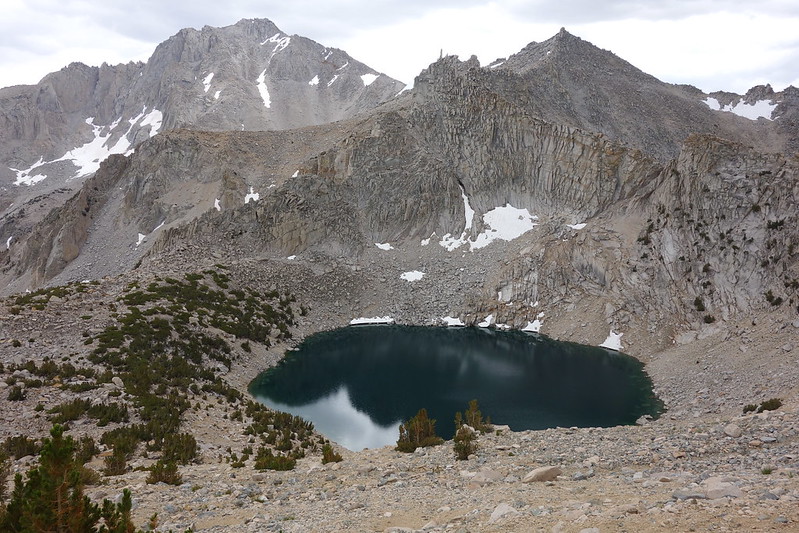 The old men are gathered on top, spread out in the talus or leaning heavily on their poles. Tired. They ask us to take a group picture of them, for which they all crowd around the Kings Canyon boundary sign. Then we talk a bit. They’re out for fives days, walking from here to Whitney. Several say something about “conquering” it. Every time one does, a few of the others cheer.

One’s got altitude sickness pretty bad. He’s been throwing up. Dizzy. I feel for the guy, but he’s adamant about walking a bit further, down to the Kearsarge Lakes for the night. He’s going to “fight on.”

They all talk like that, as though the wilderness here is an opposing team, or perhaps an opposing army, against whom their walk represents a momentous blow. But at the same time, in the silences, there’s wonder in the way they look up at the spires and down at the lakes, in the way they stare out in the distance, matching places to names. In the silences, they’re in this world, not against it. 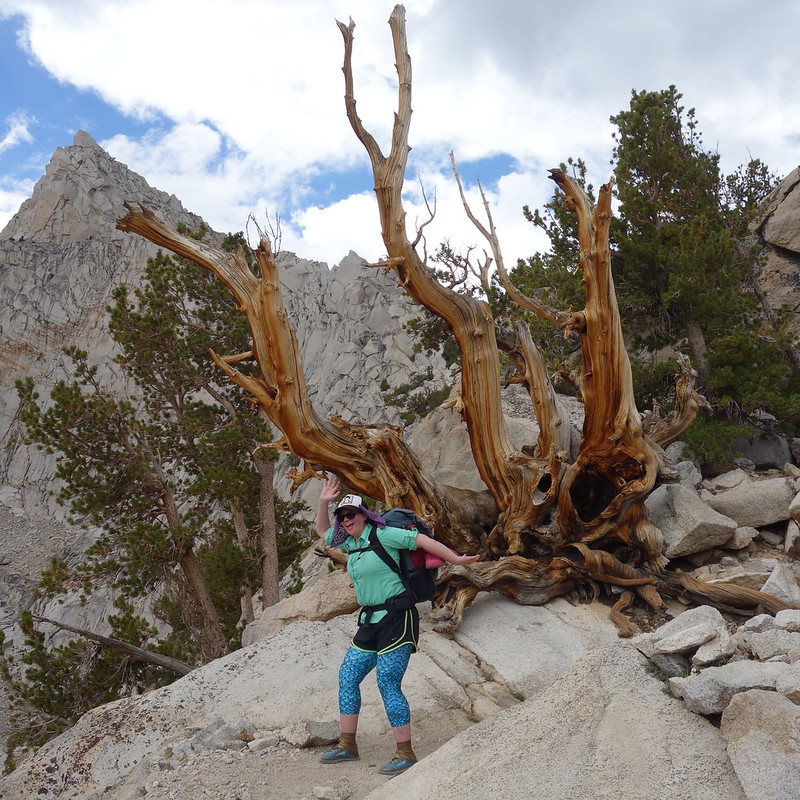 Clouds come and go on the distant peaks, deep in Kings Canyon. Distant rain looks like long lines in the sky, connecting it to ground.

We drop down the other side into a giant basin, full of lakes—Kearsarge, Bullfrog, and dozens of dark blue ponds too tiny to have names. The trail splits just below the pass, with a lower route going by the lakes, and a higher one sidehilling above, in the shadow of Mt. Rixford.

We take the high route, but then immediately stop for lunch at a small, trickling snowmelt stream, lined with lilies and lupine and purple monkeyflower. Krista hops around taking video. A white-tailed ptarmigan pops out of her hole for long enough to register an objection to all the fuss. Evidently this is the trail less taken. 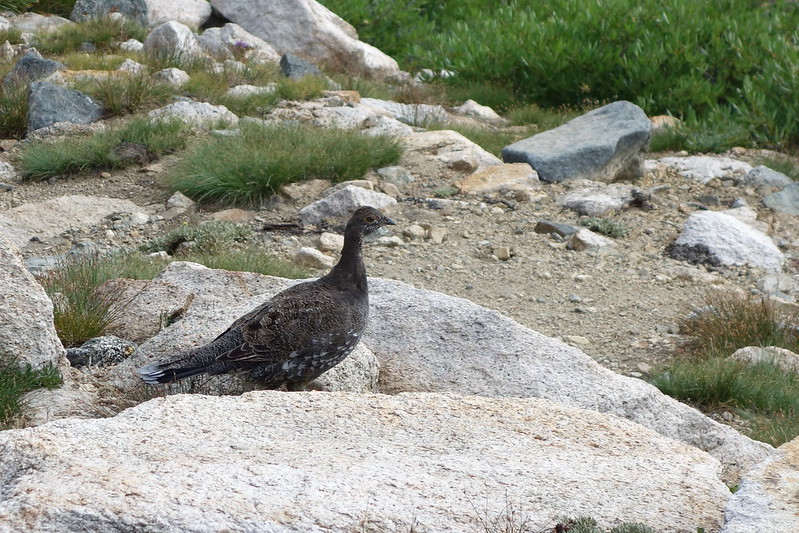 The trail traverses back-and-forth through steep sidehills and small, shallow benches littered with white granite boulders. We disturb a family of marmots, then a family of pika. The trail disappears in the overgrown grass only to reappear ten feet later, marked by two tidy rows of tiny stones. 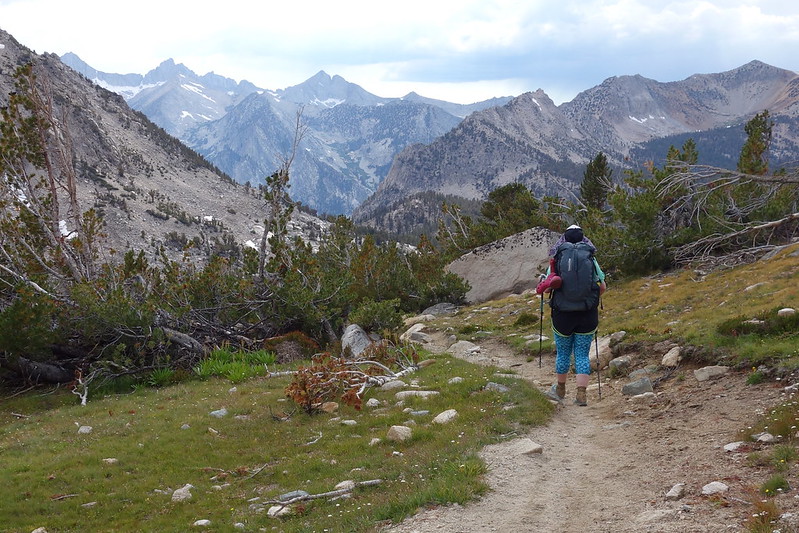 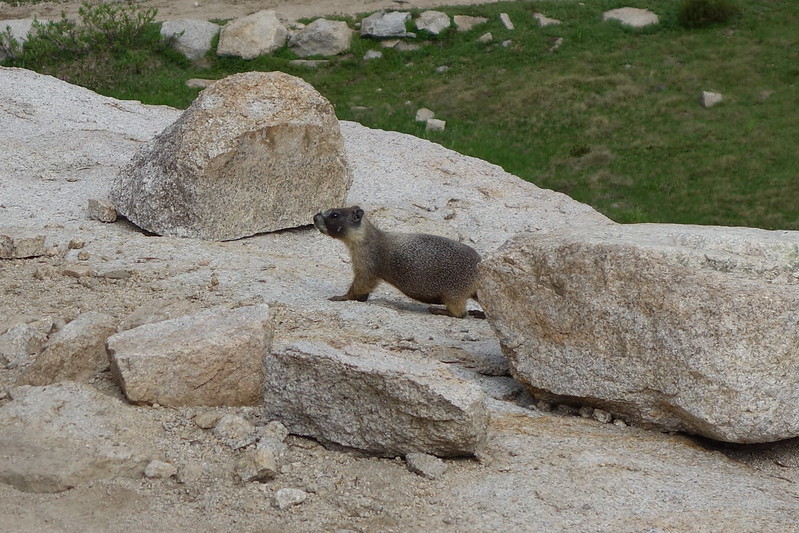 And the views are absolutely beautiful: south, down to Bubbs Creek and further, to Vidette and up to Forester Pass; and west, over infinite ridges to the South Fork Kings River, somewhere down there. Closer at hand, two deer graze at the base of our hill, either unconcerned or unaware that we’re here. 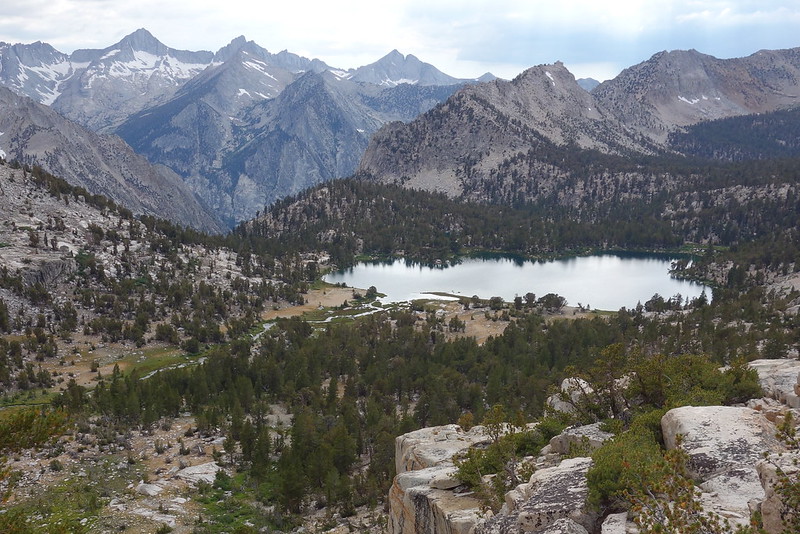 We’ve only ever seen this place dry and cloaked in smoke, the droughted lakes a dull grey against brown hills, distant ridges dimmed or invisible. Seeing it now, all deep green and blue, feels like seeing it the way it’s meant to be seen, at its best.

But it occurs to me that the way we saw it first may be the future. The fires are getting bigger, not smaller. The smoke’s getting thicker, the droughts more severe. The view now, into a verdant, healthy valley, may be just a peek into the past. We’re so lucky to have it. 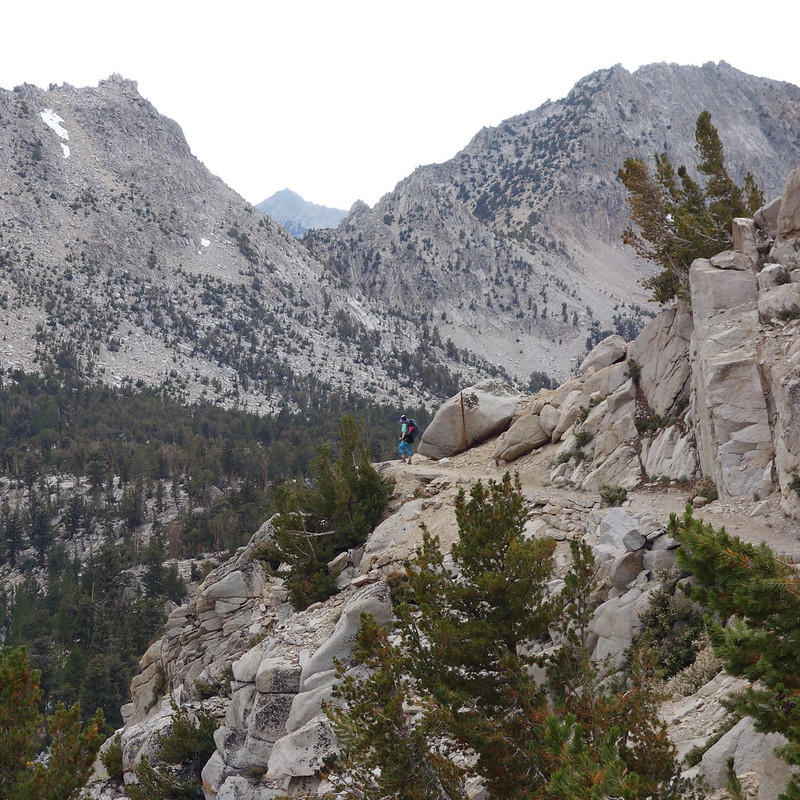 We hit the PCT in late afternoon, and stop for a short snack. There’s a charming letter from the ranger taped to the trail sign, telling of a few bears in the area, and admonishing hikers not to do anything their mothers wouldn’t want them to do.

We spend the evening traversing the west shoulder of Mt. Rixford, high above Charlotte Lake. The last time we were here was lowest moment of hiking I’ve ever had. The smoke was so thick that we could barely see ten feet ahead. Now we can see forever. The views stretch down all the way to the Kings River, maybe further. Somewhere out there, there’s an ocean. I stop in the middle of the trail and hug Krista. She doesn’t ask for an explanation. 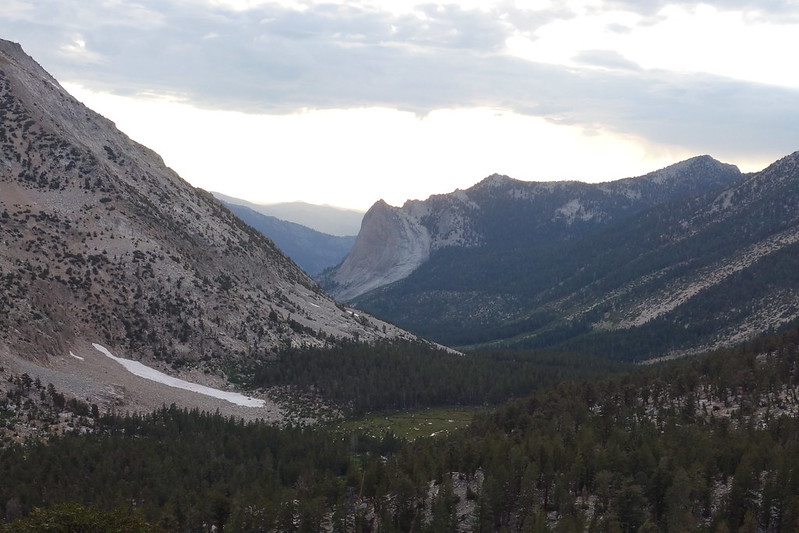 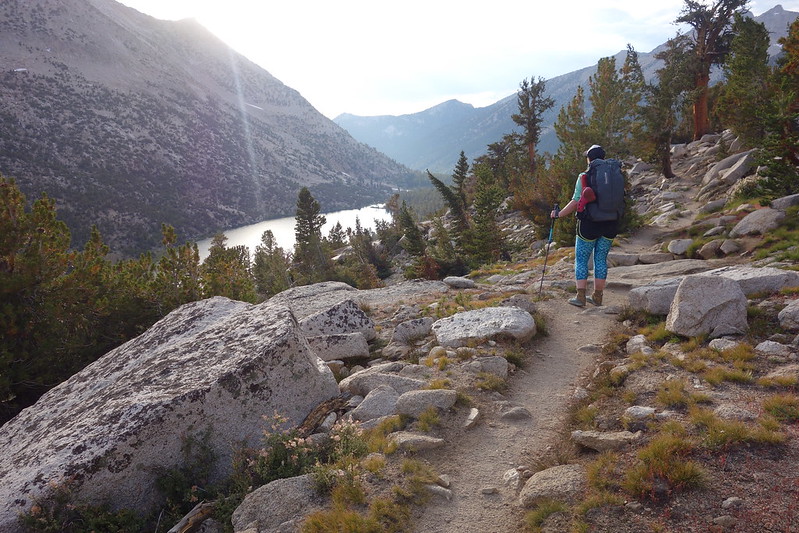 Camp tonight’s a well-sheltered set of spots on a broad knoll overlooking the first of several lakes at the southern base of Glen Pass. We set up in the sunset, wash off in the lake’s icy outflow, and set about making dinner. Gumbo tonight. The stars come out, then the Milk Way, then the moon, bright enough to dim everything else in the sky. But it lights up the hills, all glowing white in the still night air.

We’re not ready to sleep, but we lie down all the same, with our backs on the still-warm rocks. Krista grabs my hand, and, eventually, we fall into something just short of sleep, out in the open world. Together, whatever may come.