We wake to the sound of a half dozen deer flitting by our tent: running through the meadow, circling the trees, jumping over bushes… Playing. The sun’s just up, the mountains still dark but for a thin beam of red across the skyline. 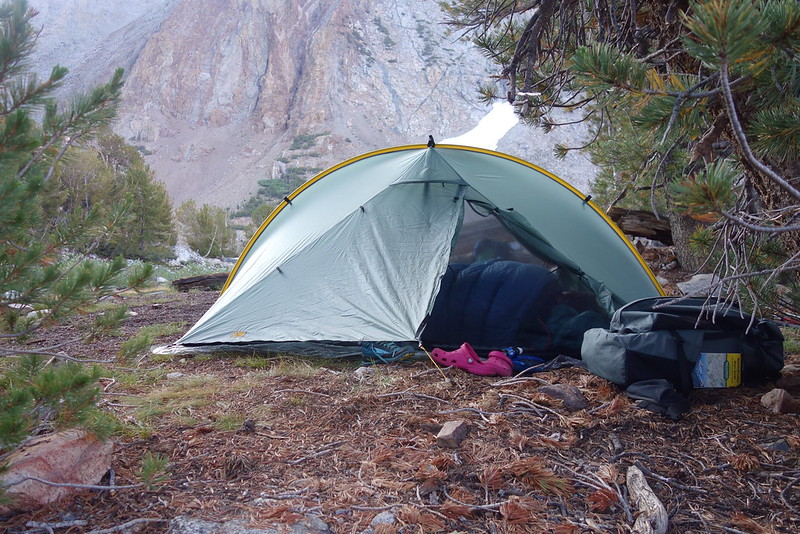 I stumble out and watch the deer jostle below. They’re sipping water from our snowmelt stream and nibbling at the tall, blooming grass, which reaches halfway up their legs. I swear I see one laugh. This whole world feels like it’s laughing. 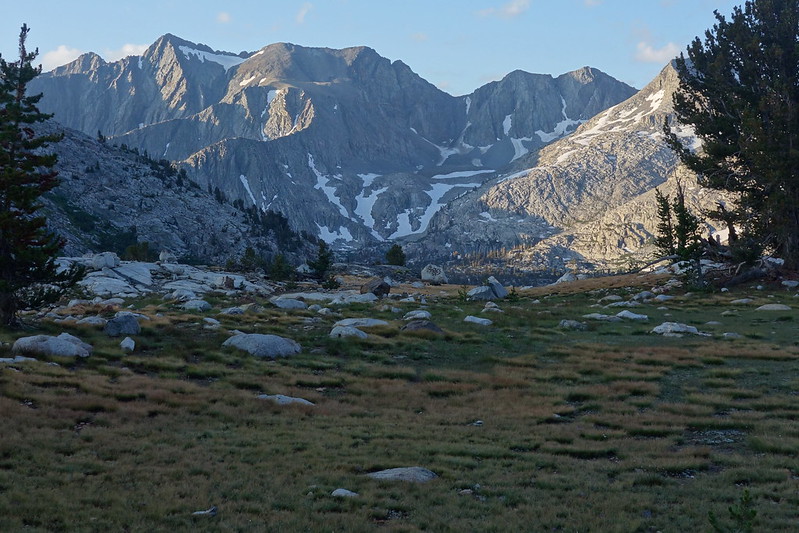 It occurs to me how different this place feels than it did years ago, when the fields were all short and brown, when the sky was always a smoky grey. It feels healthy now: verdant valleys below clear, crystal peaks; flowing water and flowers wherever we look. But it also feels like an uncommonly pure vision of a world that’s changing. I close my eyes and sit in the grass, running my fingers through its soft green stalks.

The morning’s an off-trail ramble around the lake-lined perimeter of this massive plateau. I guess it’s an old glacial step, but it’s still full of meltwater pools, of water on its way to becoming a river. 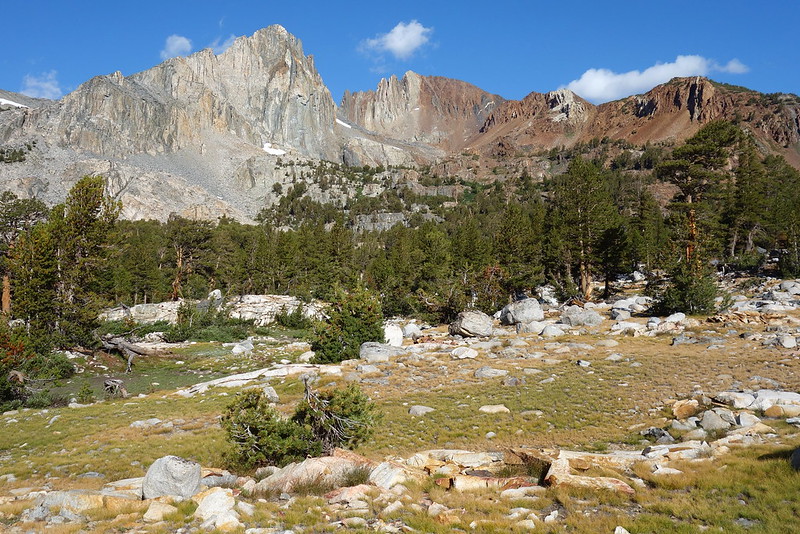 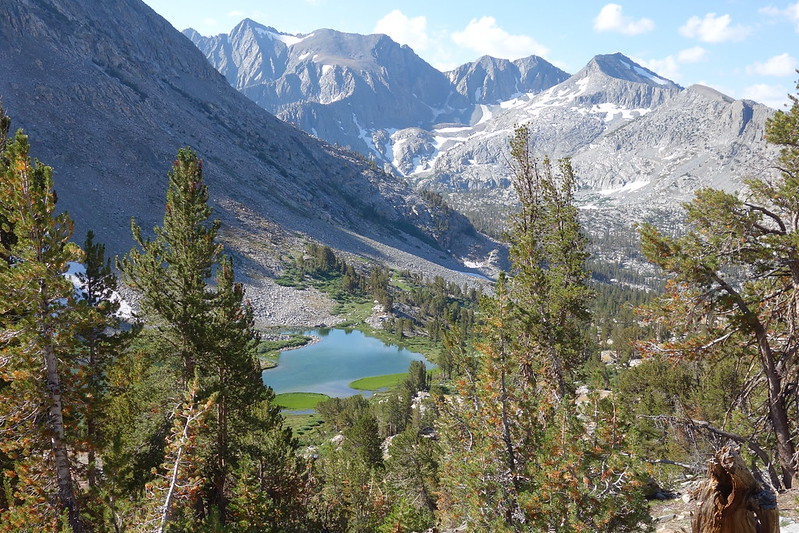 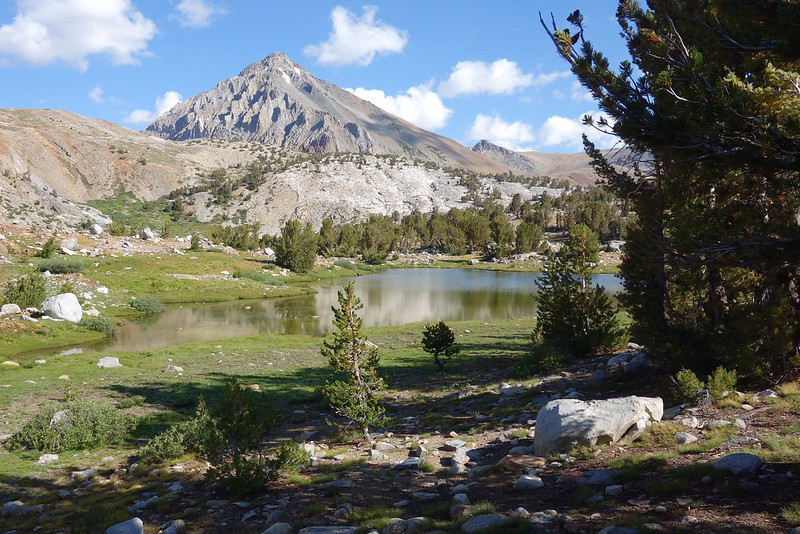 None of these lakes have names. A few are marked on our map with their elevations—“Lake 11309,” “Lake 12027”—but most are just thick moments in a solid blue line that reaches from just below the pass to the bottom of our map. To the ocean. 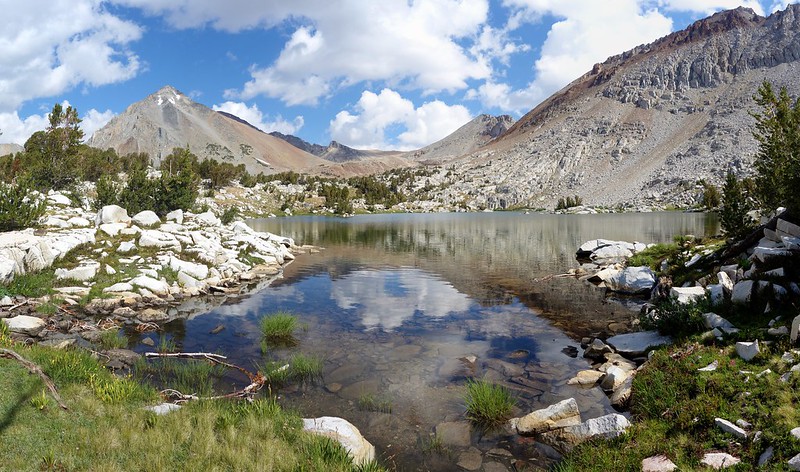 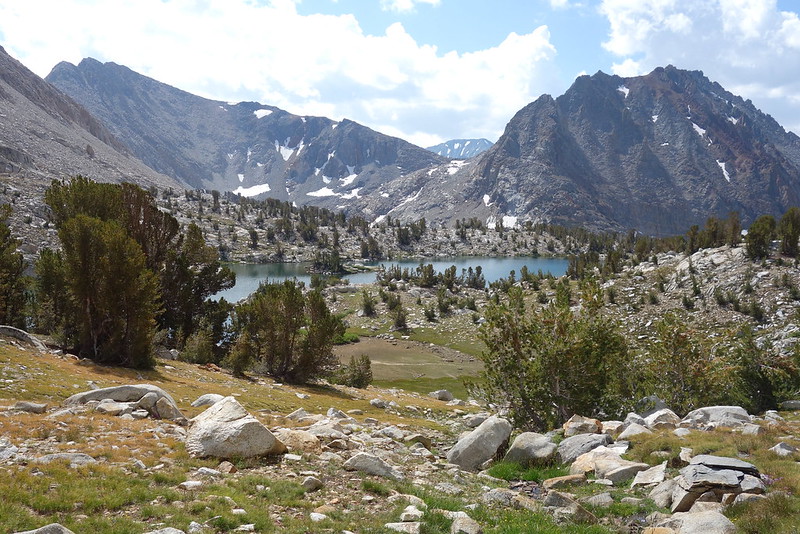 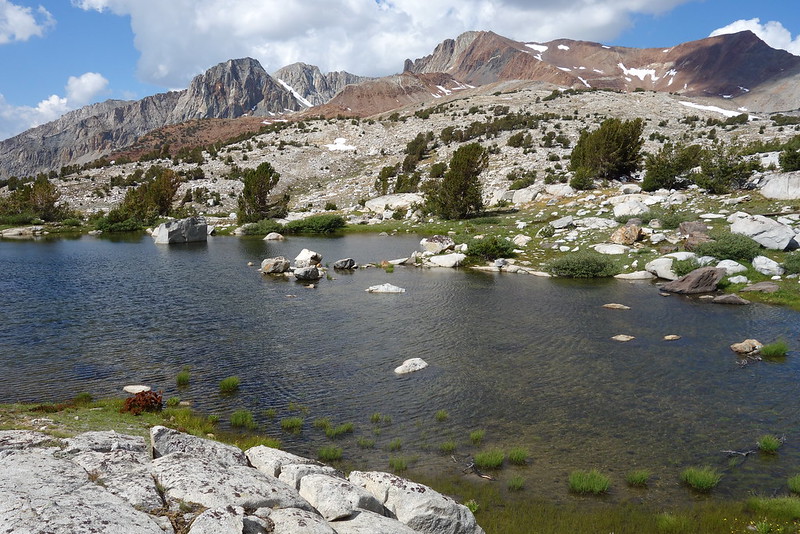 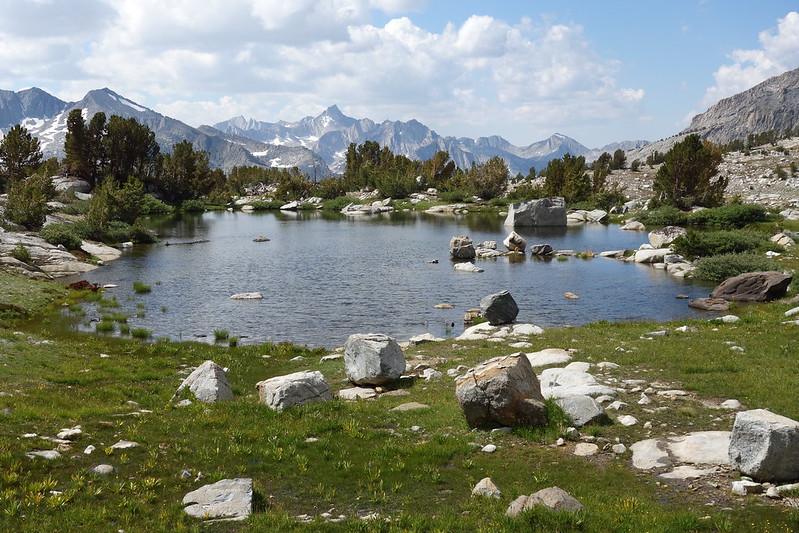 It’s beautiful. But also: the bugs are apocalyptic. Every time we stop, we’re swarmed by armed mobs of mosquitoes, who have apparently been lying in wait all year, strategizing. It’s so bad that it’s funny. Then it’s so bad that it’s not funny anymore.

We cross the trail briefly, but only to continue on, in the other direction, to a large series of lakes below Crater Mountain.

Soon the trail disappears, and with it the bugs. The green grass thins until all that’s left are occasional clumps surrounded by an eternity of white and grey rock. And then there are the lakes, like massive oceans, almost as big as the sky. Everything’s as big as the sky here.

I sit on a crumbling old rock and watch the wind wave across the water, try to count the distant waterfalls. There are too many.

The trail up to Pinchot Pass is as magnificent as I remembered it: an improbable set of switchbacks, ascending what looks, from the bottom, like a sheer face of rock. But it’s easier than I remembered, and we bound up. I can’t stop smiling at the unexpected grandeur of a clear valley, empty of smoke, empty of everything but light and rock and water. 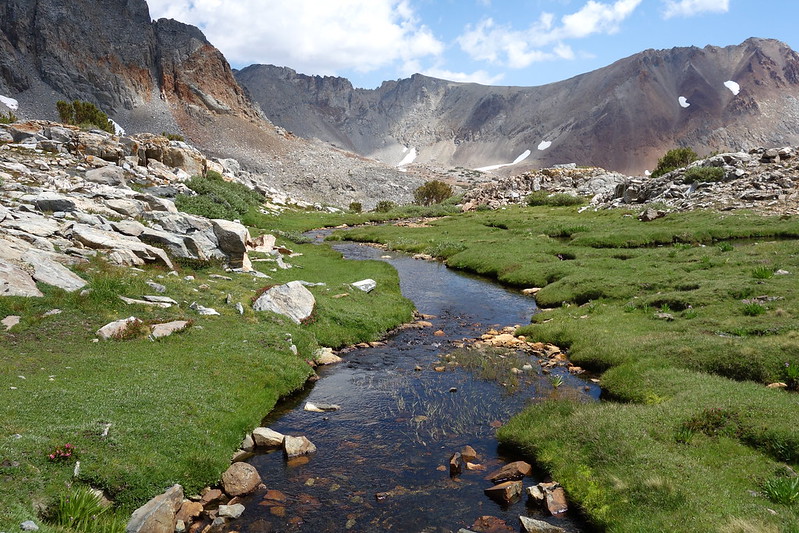 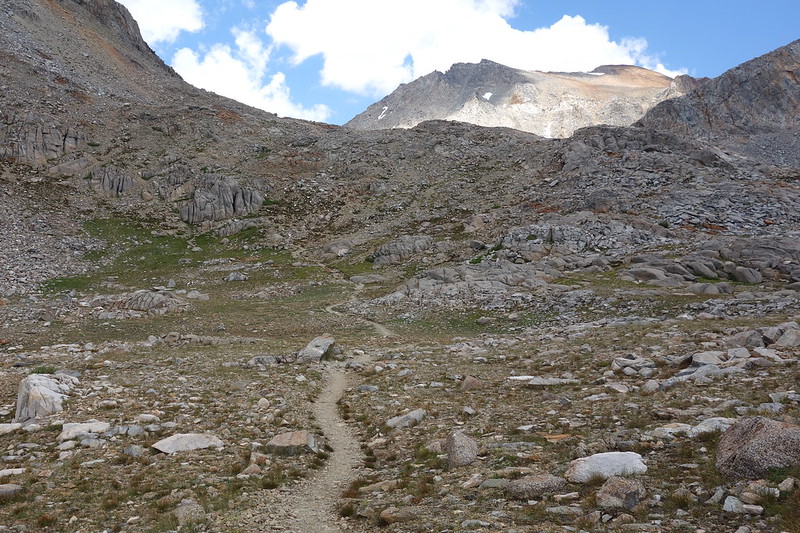 Krista’s listening to her “Summit Album,” this concept record about an evil sorcerer and invading unicorns. I’m listening to the exact same album I listened to here, two years ago, when we couldn’t see more than a hundred feet. 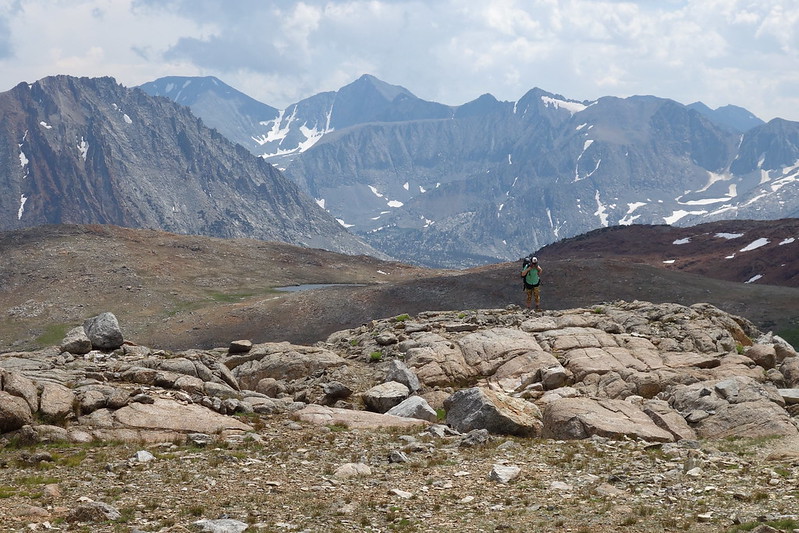 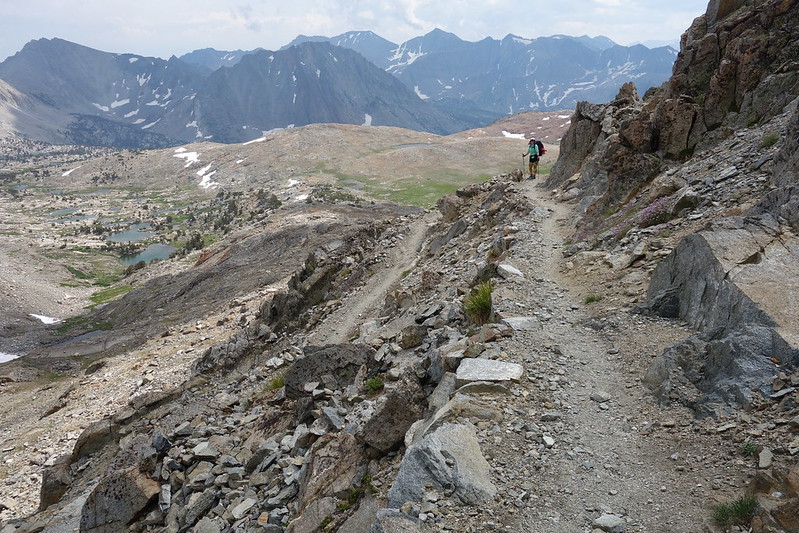 Looking north, over Lake Marjorie to the South Fork Kings River, is much the same. There are storm clouds on the horizon, grey against white granite, but no matter.

We eat lunch on top just as it starts to rain, then hurry down. We’re only staying on the trail for a half mile or so, then we’ll leave to find a series of lakes our map shows in the shadow of White Mountain.

The descent’s over almost before it begins, then we jump off into a jumble of long, flat boulders and even ramps of grass. Easy walking. Krista leads the way, so fast that I can barely keep her in sight. 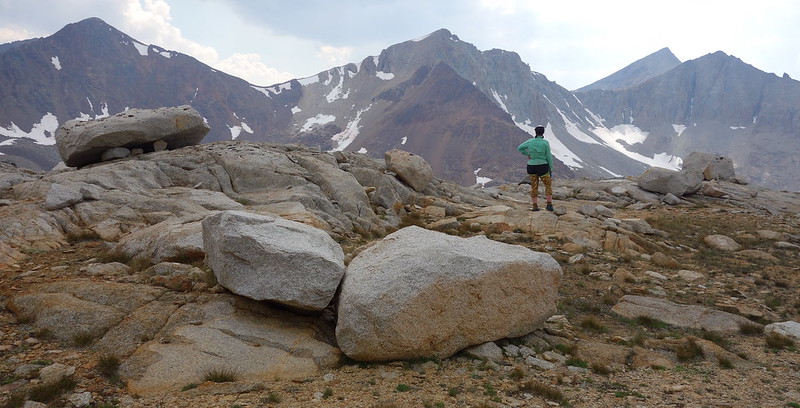 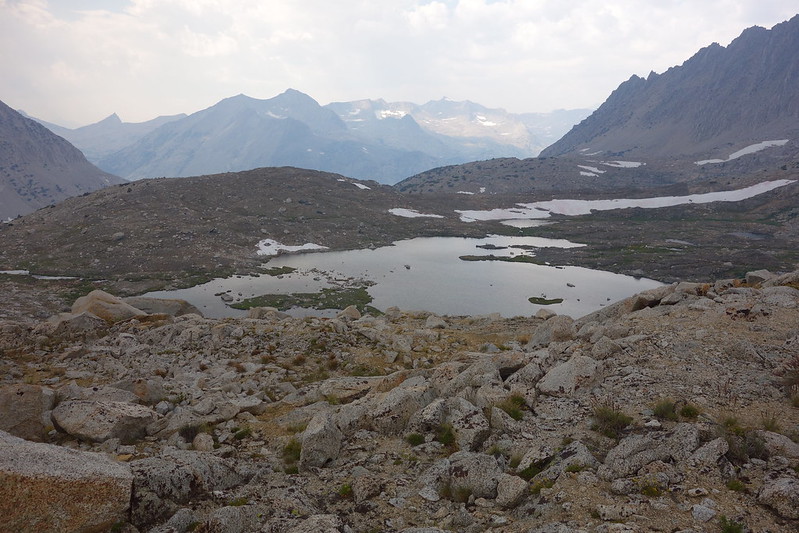 There are a few bits of climbing to get down to the lakes, but there always seems to be an easy, unseen way—thin grass walkways hiding in the granite’s cracks—and we make it down by the early afternoon. The lakes are overwhelmingly beautiful: green-blue pools, full of tiny white islands, bounded by bright pink, blooming heather. And there’s absolutely no sign of anyone else ever having been here. It’s easy to forget that anyone else exists, anywhere.

We find a flat-ish spot big enough for our tent—there’s nothing even resembling an established site here—then meander out into the largest lake. 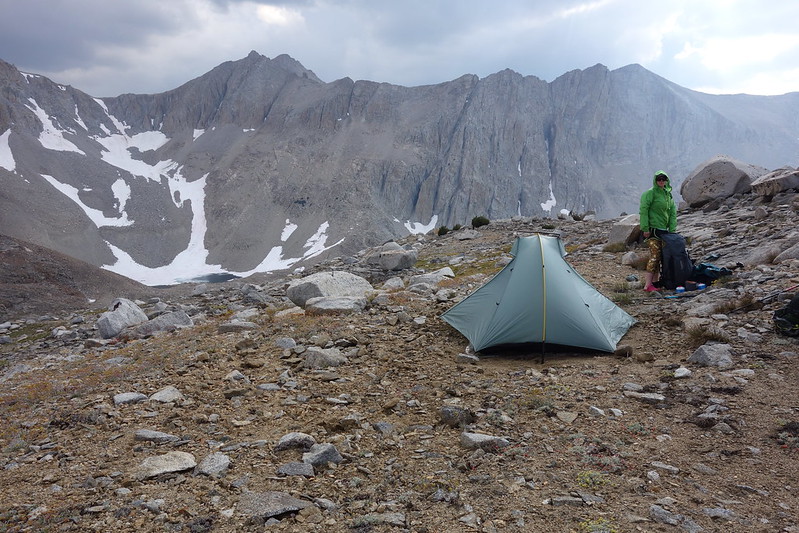 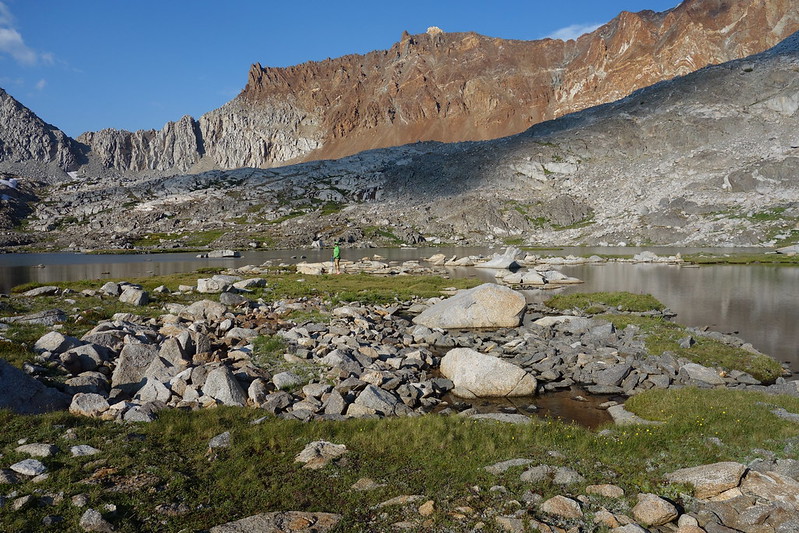 There’s an island in the middle, connected to the shore by a shallow isthmus. We wade out and sit on the island, surrounded by water. Krista plays king of the hill with herself. “Holy shit this is beautiful.” A long pause. “Holy shit.” Krista laughs. 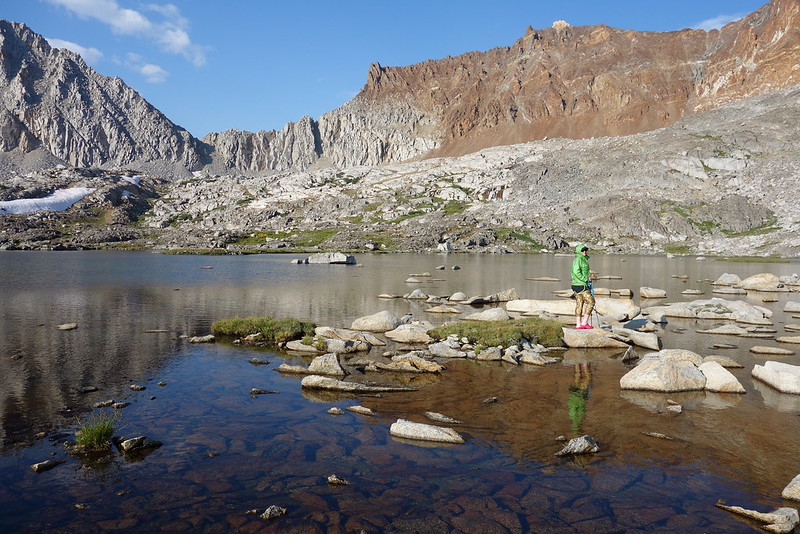 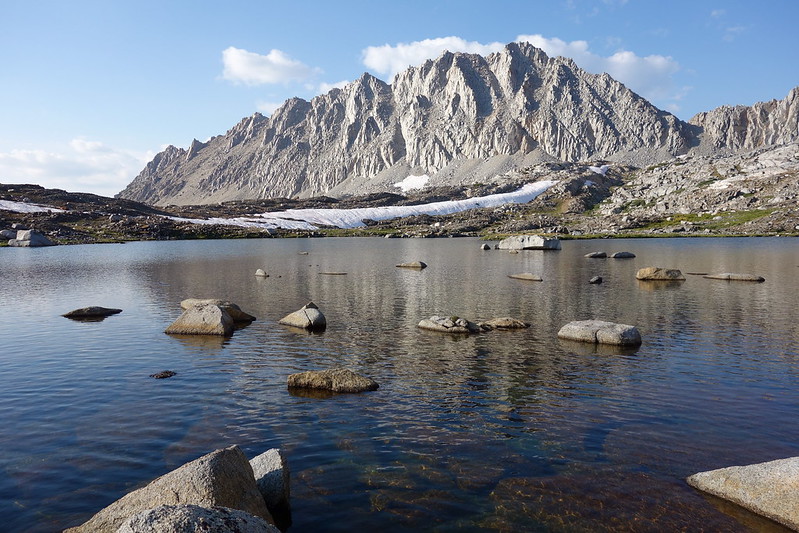 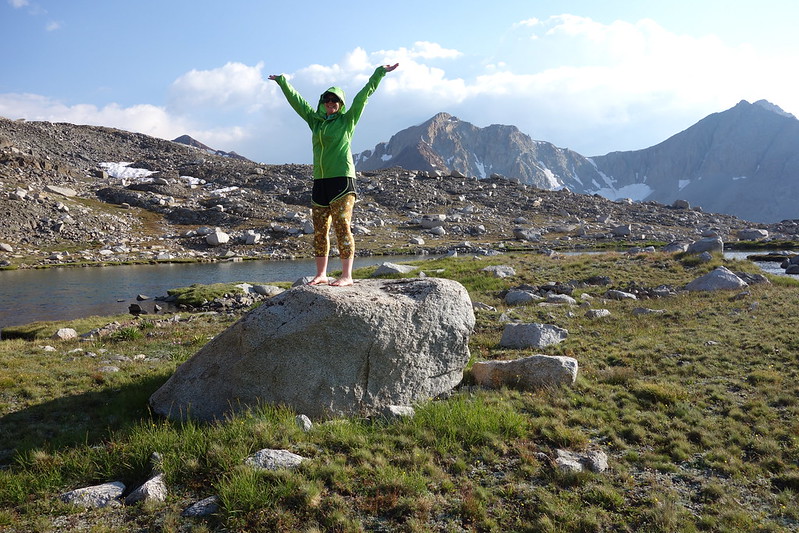 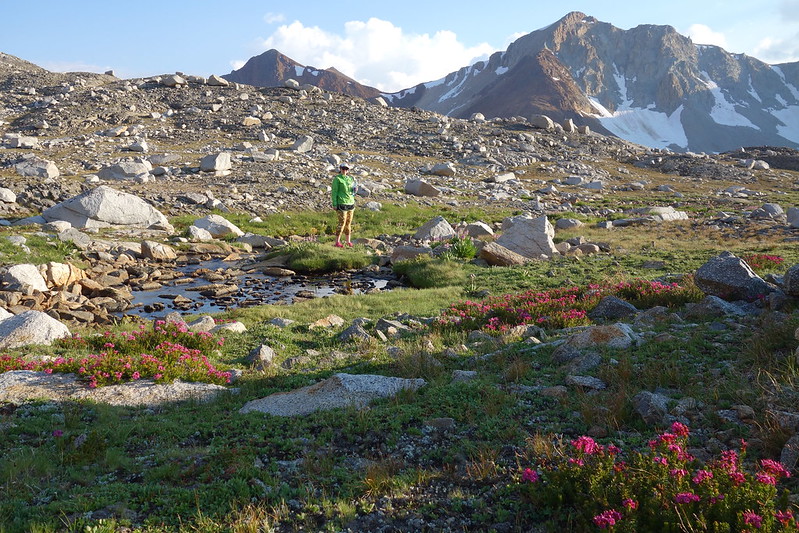 In the evening, I scramble up White Mountain’s solid granite shoulder to find the rest of the lakes. There are at least half a dozen, settled into strange shapes with long arms extended, separated from each other by short granite shelves. When wind comes, waves splash between the pools. 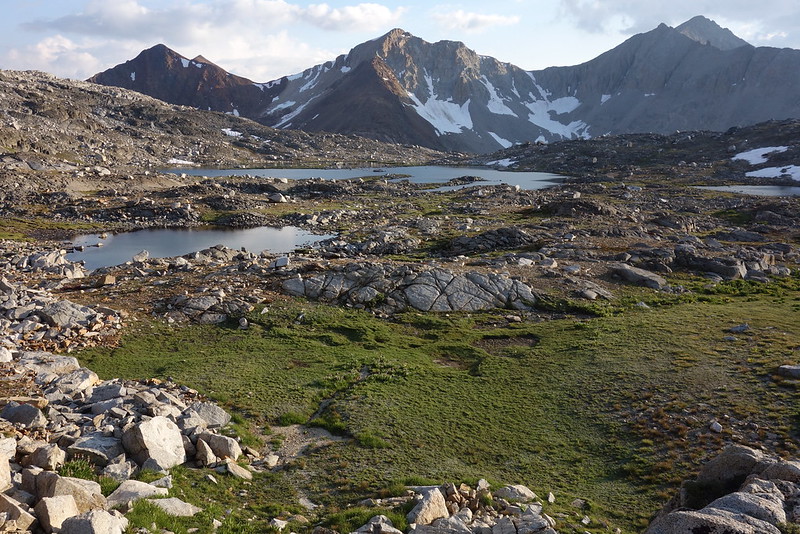 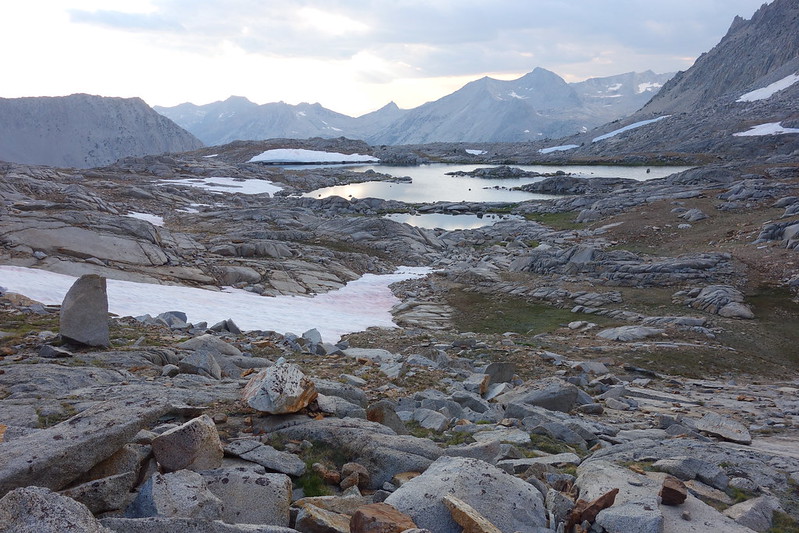 This feels, somehow, even more deserted than our lake below. It’s not just an absence of other people, or of civilization; it’s that the place seems so wild that even what little civilization I’ve brought with me smears off, like makeup in the rain. 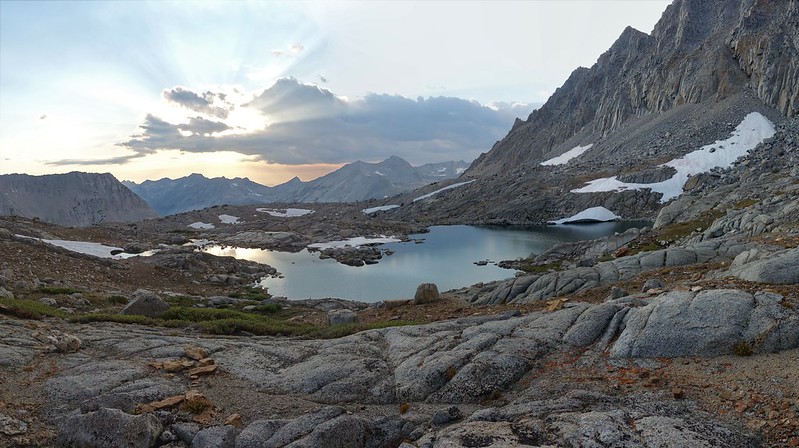 The sun starts to set and I hurry down. Back at camp, Krista’s pointing over my shoulder. “What?” I look back, and see… black. A solid mass of black clouds, just breaking over White Mountain. “Huh.” We stare a while longer, until we start to see sky-full flashes of lightning in the upper lake basin.

We cook and eat quickly, throw everything in the tent, and wait for the storm. I’m just about to say I don’t think it’ll reach us when we feel the first drops of water. Then, in seconds, a deluge. We jump in the tent just as the wind picks up. I’m just about to say how improbably calm it feels in here when a gust lifts a corner of the tent a foot off the ground. I don’t bother to finish before venturing out to secure it.

For hours, the weather gets worse and worse until it’s hailing, and the wind is so loud that we can barely hear each other speak. Every couple of minutes there’ll be a flash of lightning, and immediately a burst of thunder so deep I feel it in my chest.

Things begin to clear around midnight. By one, the storm’s gone and the sky’s full of stars. I should be sleeping, but I wander out onto the warm, steaming wet rocks, look up, and laugh to myself, laugh at the improbability of it all: a puny person, nearly naked, in the middle of this rock cathedral. This holy place.