Our plateau freezes overnight, and we wake to a thin white frost covering everything: the tent, rocks, grass, and the clothes we left out to dry overnight. But as soon as the sun hits us, it all melts—or evaporates, as it doesn’t seem to leave any wet behind—and we have the most beautiful morning, eating oatmeal and watching the light creep up the South Fork Kings River. 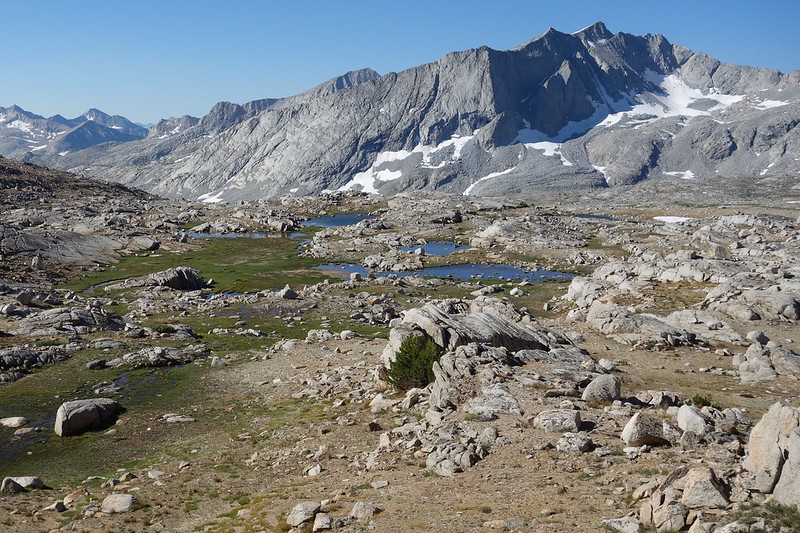 The climb up Mather Pass’s improbable switchbacks goes improbably well. Krista puts on her Summit Album, but we’re going so fast that we’re done before it’s over.

From the top, the South Fork Kings stretches from the small shallow lakes that dot the open Upper Basin into its rushing, steep, closed canyon. On the other side, the Palisade Lakes stretch out of view, down to LeConte Canyon.

There’s a single dude on top, futzing with a machine that looks halfway between a walkie-talkie and a microwave. He’s stabbing at the buttons so fast that I have to imagine either he’s an absolute walkie-talkie / microwave savant, or he’s having a rough morning.

Turns out it’s the latter. Dude’s doing the JMT, with a totally reasonable schedule to keep, but the storms have got him a bit behind. We do our best to encourage—he’s got an easy hike down to the Kings River, and the climb up to Pinchot won’t be so bad, and after that there’s the gorgeous…—but he’s not having it.

He looks up and asks, with a surprising anger, how we’ve been faring. Krista smiles. “Oh, last night was a little interesting. We were camped just under the pass and got some…” He interrupts. “It’s better to camp low.” Krista looks like she’s just found a bug in her soup, and walks away. I figure, after yesterday, it’s my turn to take this one. I tell him that we were well off the ridge, with plenty of stuff that would have been hit by lightning before us. But he just frowns. “It’s just better to camp low, don’t you think?” He spits out that last bit like he’s picking a fight. Wait, is he picking a fight? He doesn’t mean it as a question.

But it’s too beautiful up here to get into it, so I leave him to his combination fax machine / combo cooker or whatever, and go watch the view with Krista. As I’m walking away, he asks if I’ve got a map. Apparently, the map function on his telegraph / dishwasher isn’t working, and he wants to see the route ahead. He spends a while looking at ours, while absentmindedly explaining some of the finer points of hiking to me. The trick, it transpires, is the appliances. Too many people underestimate the necessity of a refrigerator out here. And toaster ovens. It’s dangerous to be out here without a toaster oven. Don’t you think?

By the time he’s moved on to cutlery and china patterns, Krista’s all packed up. I thank him for the lesson, and rush after Krista, who’s already down the trail, laughing. He yells after me, “Stay safe!” He sounds precisely halfway between condescending and kind.

What the hell’s going on with that guy? My first interpretation is that dude’s just a jerk. But is it really that easy?

I try to think about the day from his perspective. He’s behind. The weather’s been hard. Given the percentage of his house that he’s hauled up here, it’s his first long trip. He must be scared.

Then I think about the trip we’ve been having. We’ve built a schedule where we can basically walk however long or short we want each day, and still be fine. The weather’s been interesting, but we’ve had each other, and anyway this isn’t our first long hike. I don’t think I’ve been scared yet.

So I know that dude must be having a hard time. But I think about all the real conversations we could have been having—about feelings of relief and accomplishment at the ends of long days, the calm when you realize a storm has passed, or the almost unspeakable majesty of seeing this all for the first time—when instead we just had this bizarre, tense thing of him expert-ing at us. Why couldn’t it have been otherwise?

I watch Krista walking ahead and think about the way I was a decade ago, when I was first in grad school. I was completely overwhelmed by all the things I didn’t know and all the things I didn’t think I could be. I was scared. But it came out as condescension. It came out as me being a pushy and patronizing, talking down to people who loved me, acting like no one could know everything I knew.

What brought me out of that was that people kept loving me despite my bullshit. They kept loving me until eventually I felt safe enough to be vulnerable and honest about all the things that scared me. The whole period’s a joke now—we sometimes talk about “Masters Robin” making an uninvited appearance—but it also still stands as a reminder to me of what fear can do.

I think of that time, and I imagine our friend from up top, sitting alone in his tent through that storm the other night, maybe unsure of when it would end or of whether he’d get to his resupply. And I watch Krista. I’m so lucky to be here with her, with her in a way that lets me be this version of me.

The walk down to the Palisade Lakes is longer than I remembered, and hotter. There are also a few bits trail that are still covered with steep, slick snow, where we kick in watery steps. 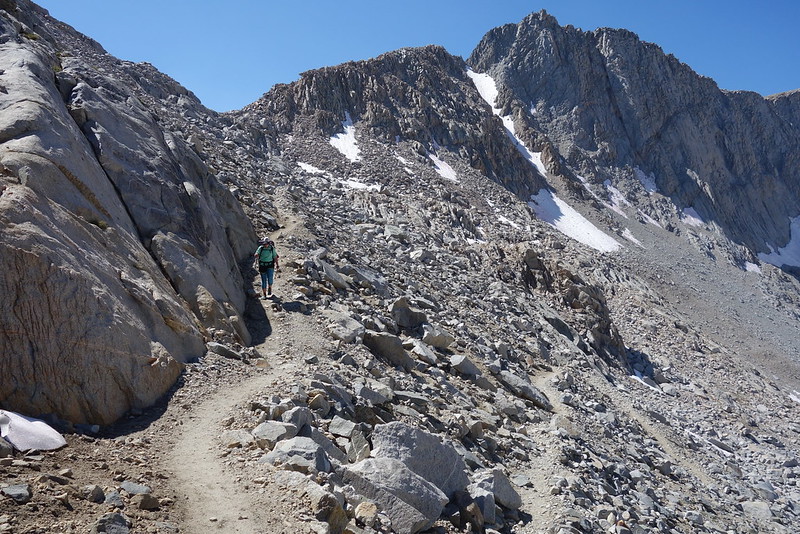 But it’s so sunny and beautiful that it’s hard to feel anything but content. Dozens of waterfalls tumble from the Palisade Peaks above, where snow and bright white granite are almost indistinguishable. Every stream is lined with blooming heather, and everywhere there are streaks of green, stretching from high ridges to the river valley bottom. We stop again and again, taking pictures. 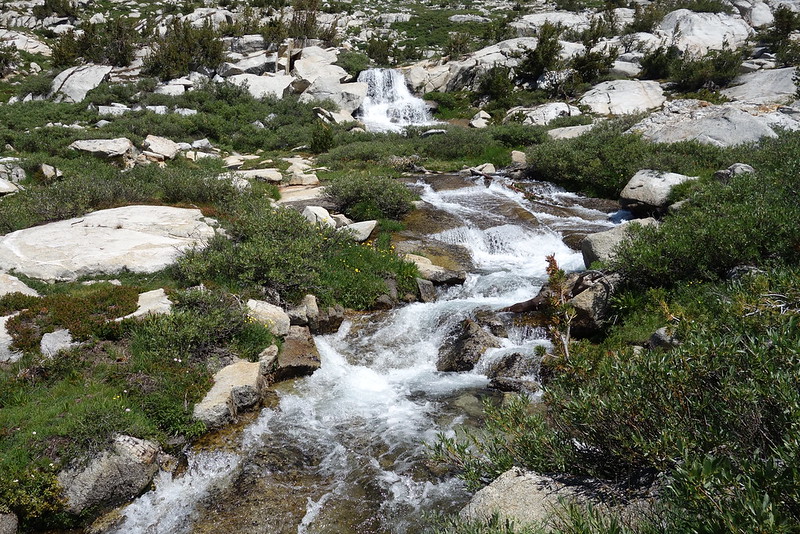 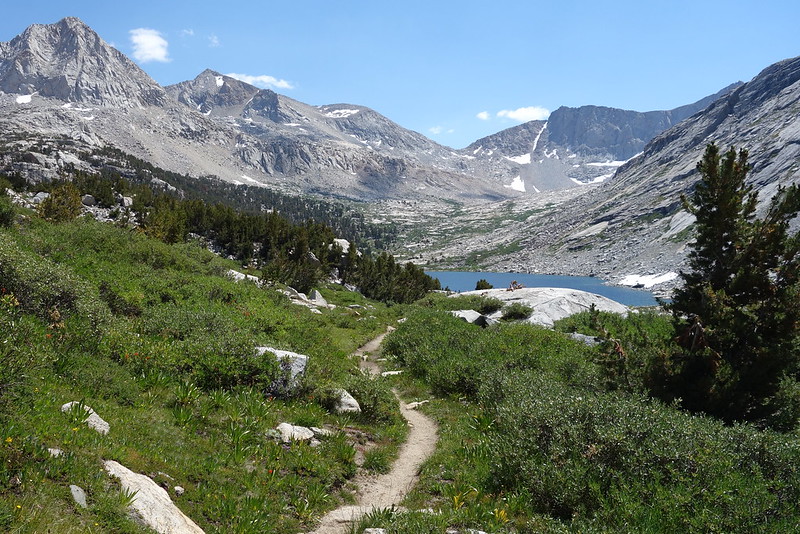 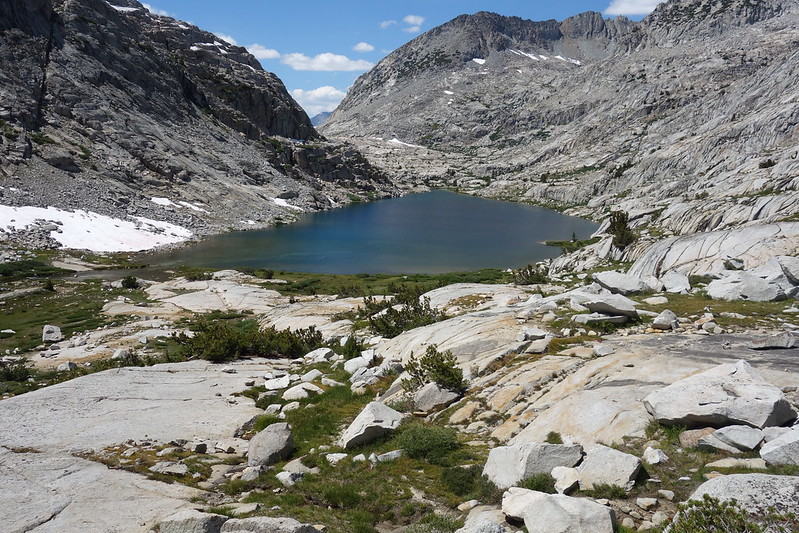 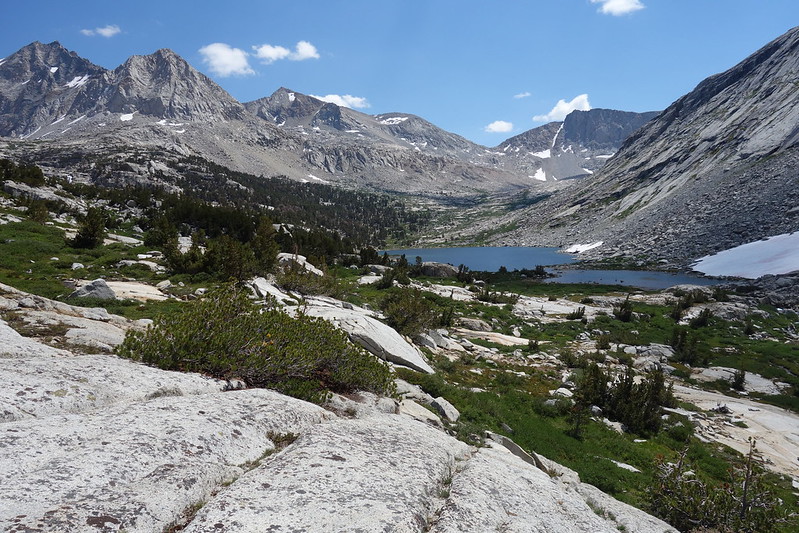 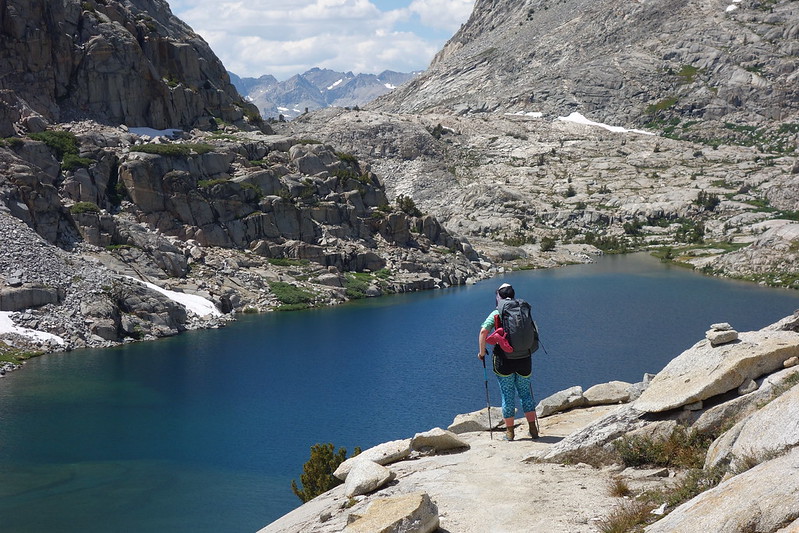 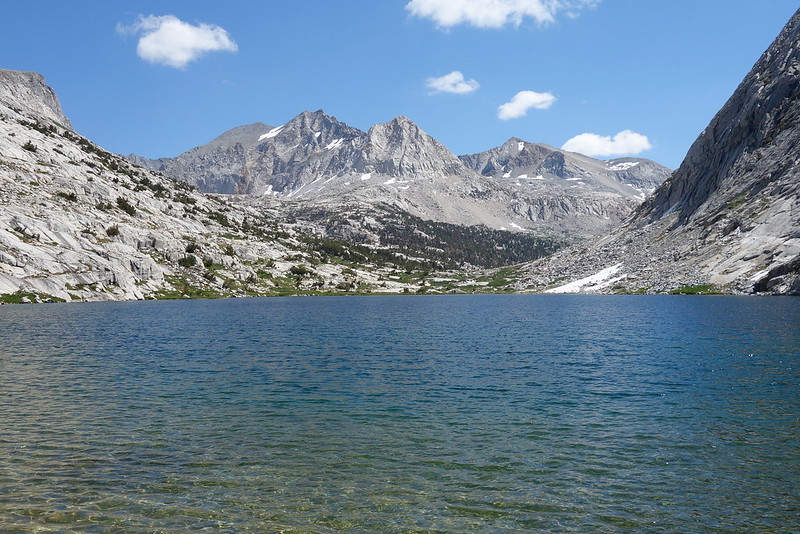 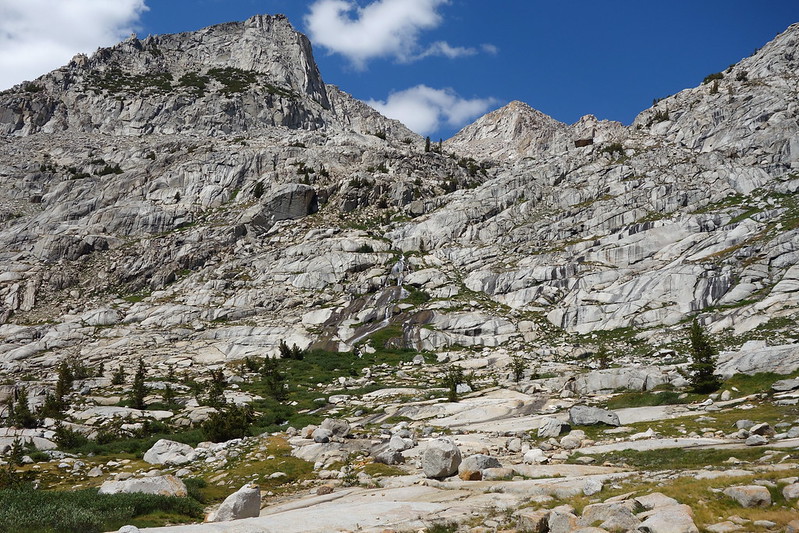 We stayed there last time, after I almost literally tripped over it looking for a somewhat secluded space to setup. And we’re stopped there now, lounging long enough for lunch and a swim, and for miles of memories. 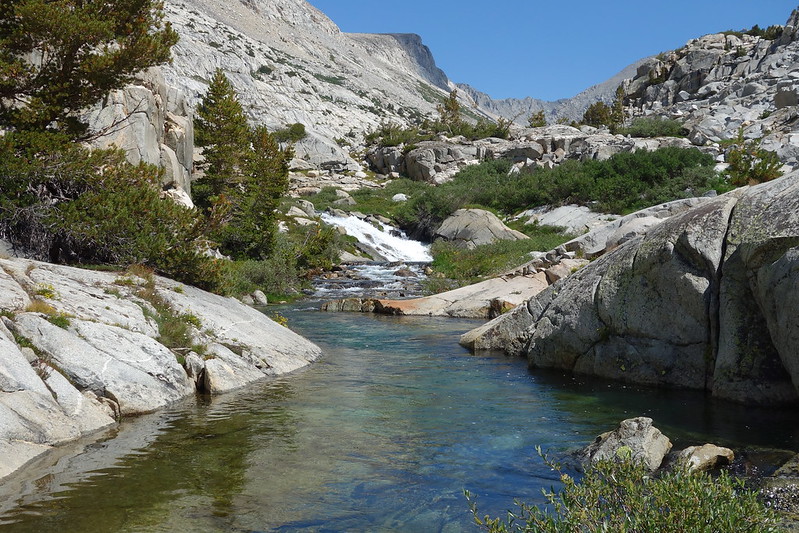 The water was low last time, but it’s flooding now, and the little pools are full of foot-long trout, darting back and forth. It’s cold—there’s melting ice just up the way—but the afternoon’s grown hot, and we both dunk, at least for a second, emerging with high pitched yelps that sound a lot like marmots. 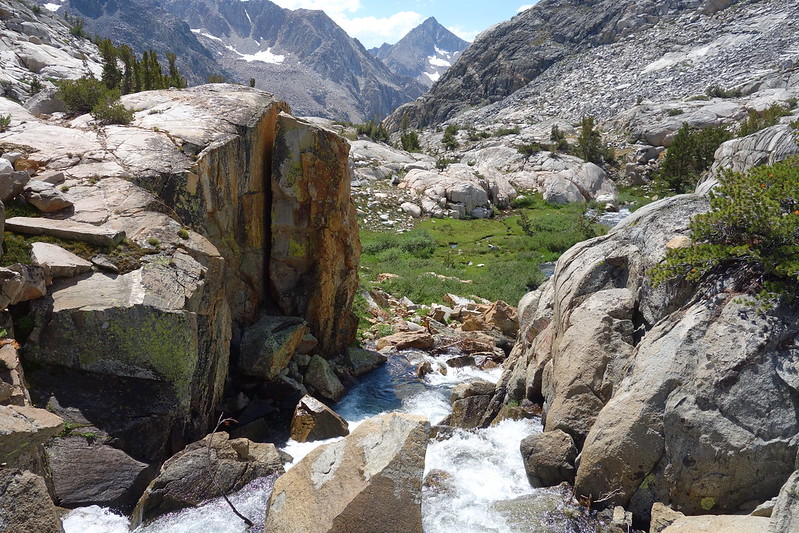 We eat in a small piece of shade—the only in sight—staring at the small bare patch where we put our tent last time. Krista smiles, and looks at me crookedly. “I’m so glad we started doing this.” My eyes sting in this way they always do when I’m about to get teary. “I’m so glad we do this together.” A long pause to chew. “Hey,” she smiles wider. “Is the chocolate in your trail mix melted?” It is, but it doesn’t matter, and we each take messy handfuls.

Our little piece of shade, it transpires, was an oasis in a baking desert. The afternoon’s become deliriously hot, and I’m covered in sweat by the time we finish the few hundred-foot climb back to the trail.

Then The Golden Staircase. We’re going the right direction—that is: down—but it’s still almost too hot to handle. And the sun feels bizarrely intense. And we seem to be descending into a solid, swirling pool of mosquitoes. And… is it too soon to mention the heat again? 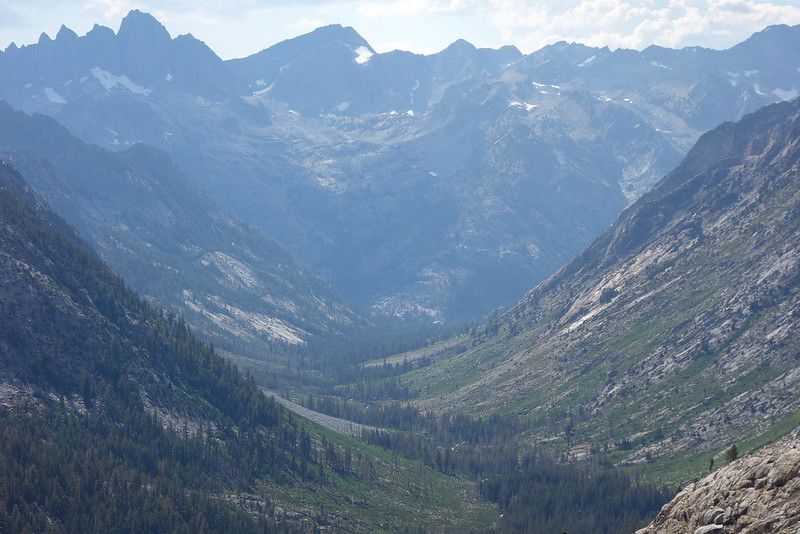 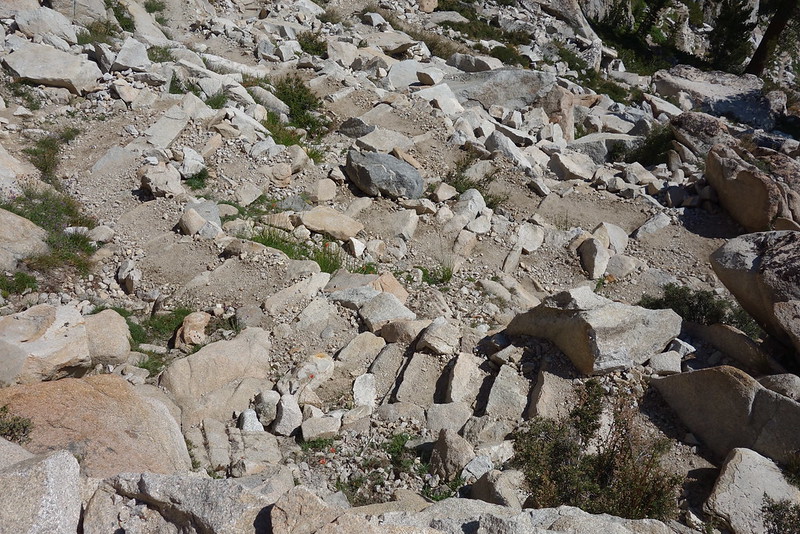 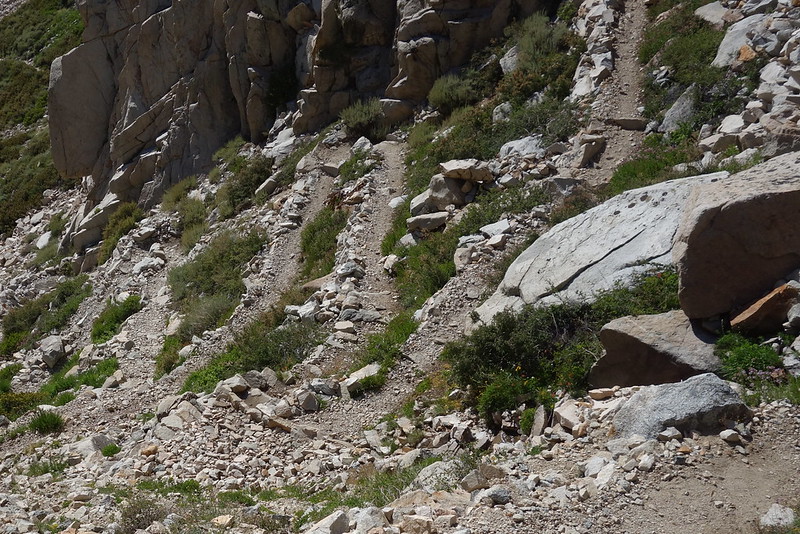 We have a procedure for times like this: we put on headphones, suspend all normal niceties, and just go until we’re out of it. Krista looks at me, puts on some Eurodance, and begins nearly running down the trail. It’s such a joy to watch that, trailing increasingly far behind, I barely notice the glowing red sunburn growing on the top of my head, where less experienced men put hair.

We make it down eventually, both out of water and in desperate need of a break. But the bugs are so bad that our first order is, well: we set up an impromptu shower, like those misting stations at outdoor concerts, but spraying DEET instead, and both run through, with a delight and abandon that’d make the kids at Coachella jealous. That taken care of, we bushwhack down to the creek, and take turns drinking liters of water straight from the filter.

After a while, I start to feel like a human again. Krista seems to be feeling better too. She’s laughing. “Dude,” she vaguely gestures at my head. “You look like a fucking tomato.” I know instantly that she’s right. “I hate tomatoes.”

The afternoon shifts smoothly to evening, as the day’s harsh light softens on the canyon’s steep white walls. We’re moving fast now—in the shade, in the easing heat. Krista’s still on the Eurodance, Kylie Minogue now. One could almost tell just by her dance moves. I catch up to her, briefly, and ask if she wants a break. “Can’t stop now. I love this song.” 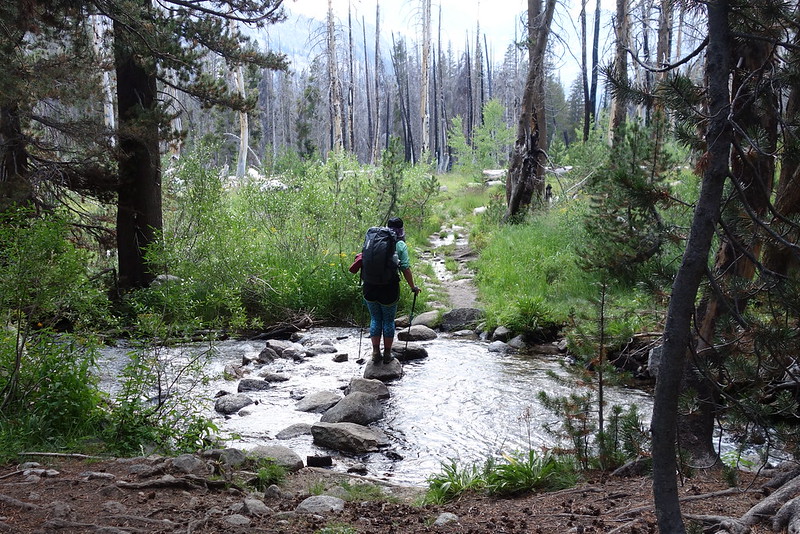 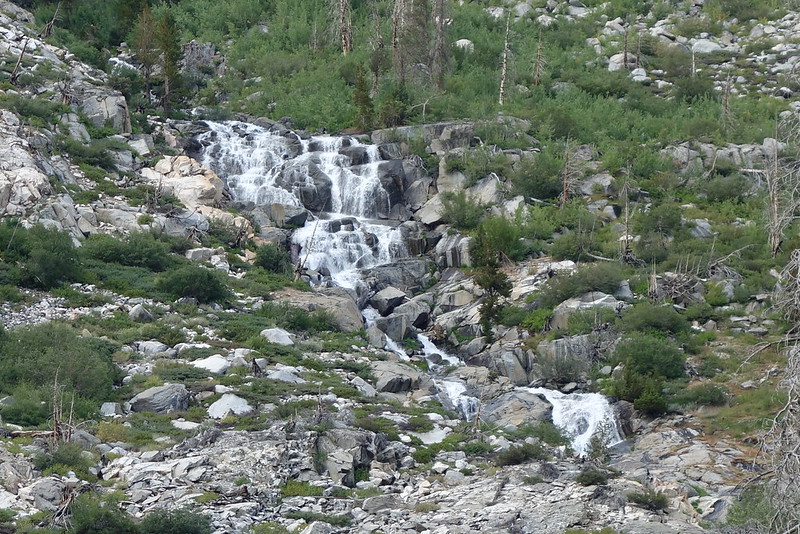 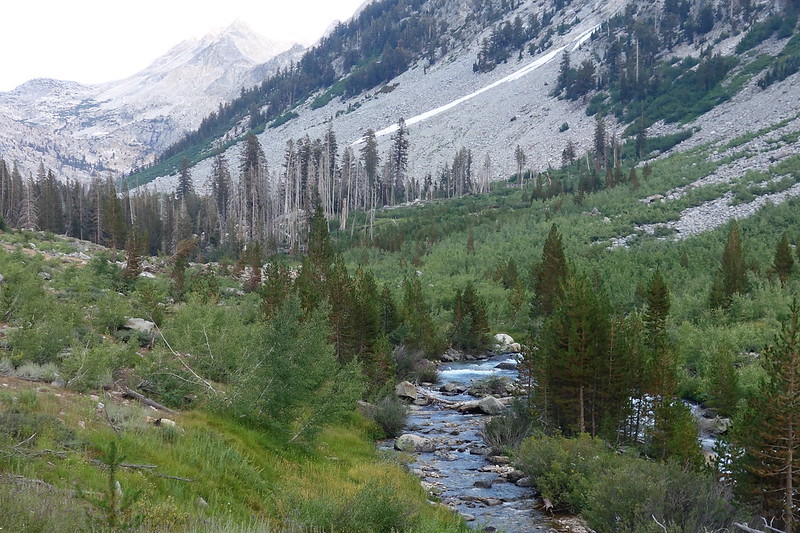 Six miles later, we’re at the canyon bottom, where Palisade Creek and the Middle Fork Kings meet. We find a small spot tucked between the trail and river, just big enough for our tent, but with an enormous fire ring.

We scramble down to the water to wash off the day’s heat, then climb into our warm clothes and sit around the empty fire ring, making dinner. There’s a bunch of dry stacked wood, and the idea seems to occur to us both at the same time. “Do you want…” we start shyly. “Do you want to maybe have a fire?”

As a rule, neither of us like campfires out here. But the wood is already gathered, and the pit is already built, and… well, it just sounds so damn pleasant. So I go about the dinner stuff while Krista starts a fire.

Here’s the thing about Krista and fire: she’s magnificent at it. Like: one moment there’s a timid little flame, kept alive by a scrap of paper; the next, there’s a towering bon fire big enough, she’s reminded me more than once, to burn a husband’s body. (“I mean, just theoretically!”)

We eat as the colossal flames burn to embers, then sit out as the embers fade and the stars start to shine. It’s nearly midnight by the time I scramble back down to the creek to fetch some water to drown what’s left. Krista’s in the tent, snoring. The water boils and turns to steam as it hits the hot rocks, then bubbles softly as it floods the ring.

I wonder about our friend from up top. He was hoping to make it over Pinchot Pass today. I hope he did. Maybe he’s camped in that beautiful basin just south of the pass. Maybe he found those off trail lakes. Maybe he stayed up, watching the stars.

In the tent, Krista wakes up long enough to say goodnight. And I sleep the easy sleep of one who no longer needs his armor. 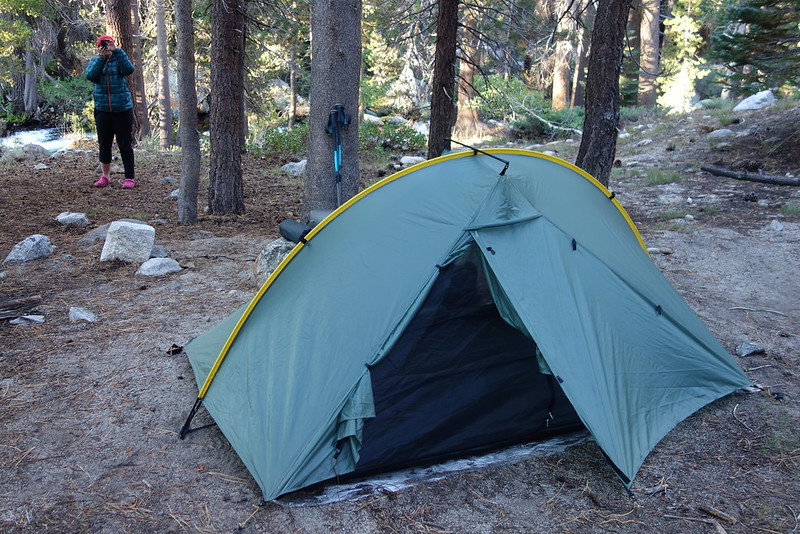 7 thoughts on “Back to the Sierra, Day 6: The Fragility of Goodness”