The morning feels like a dream. The air is clear in camp, but there’s a soft mist on the ridges that makes them seem like fuzzy old photographs, or images from old Hollywood movies with Vaseline on the lens. 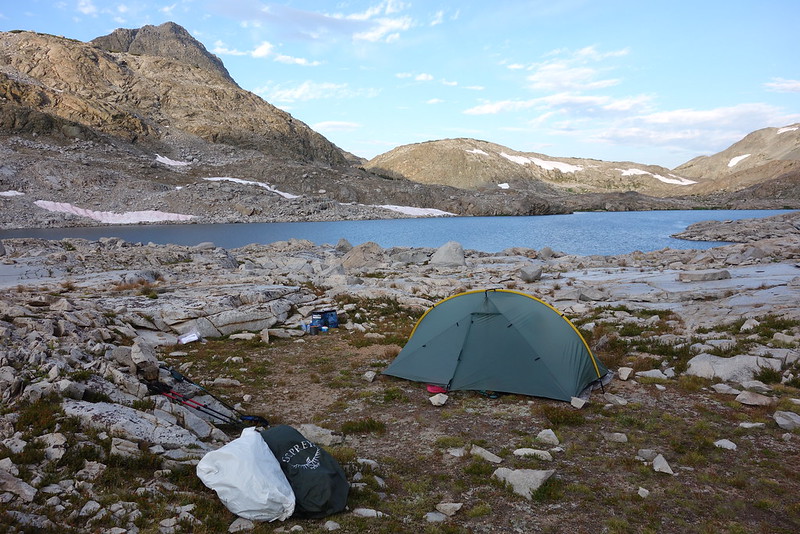 And it’s absolutely quiet, quiet in that way that surrounds you and makes the air thick. We talk quietly, the words fall still, unechoing. Two birds silently circle the lakes, hundreds of feet above us.

It feels like we’re part of an old still-life.

We finish crossing to the lake’s north side, then scramble across the only obvious impediment in sight: a steep rockslide, a few hundred feet across. It looks daunting from the edge, but there’s something of a kicked-in boot path, and we get through easily. 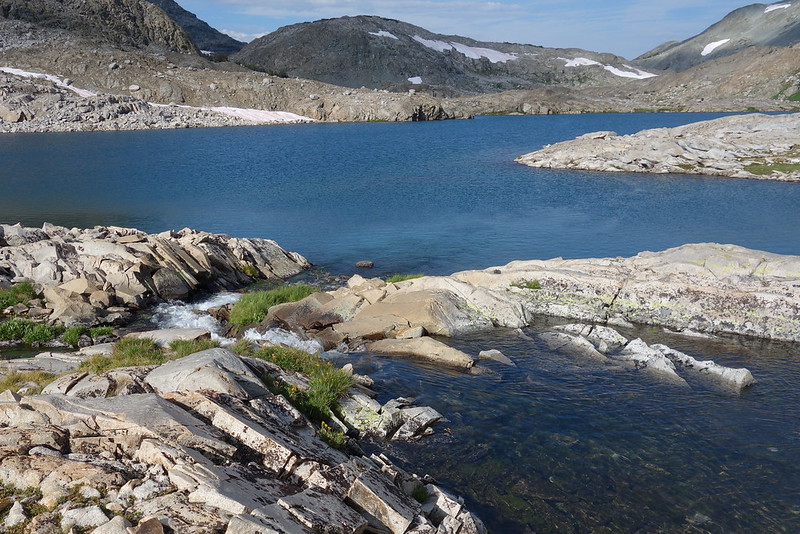 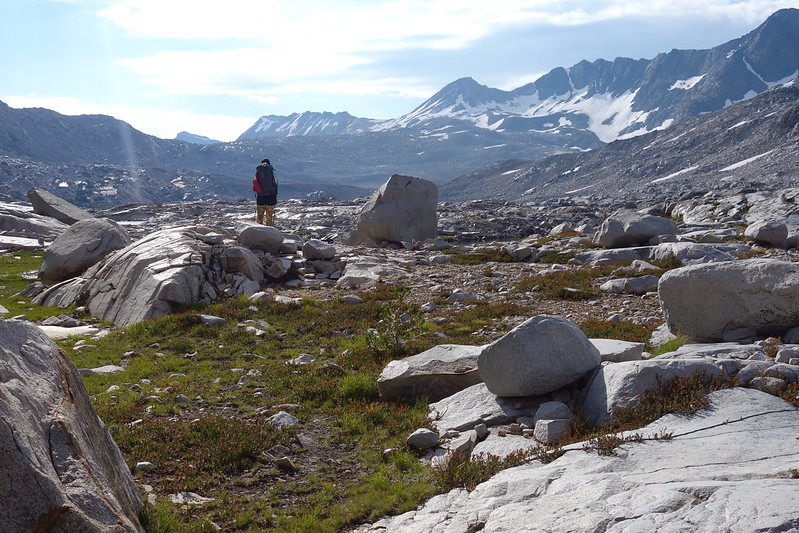 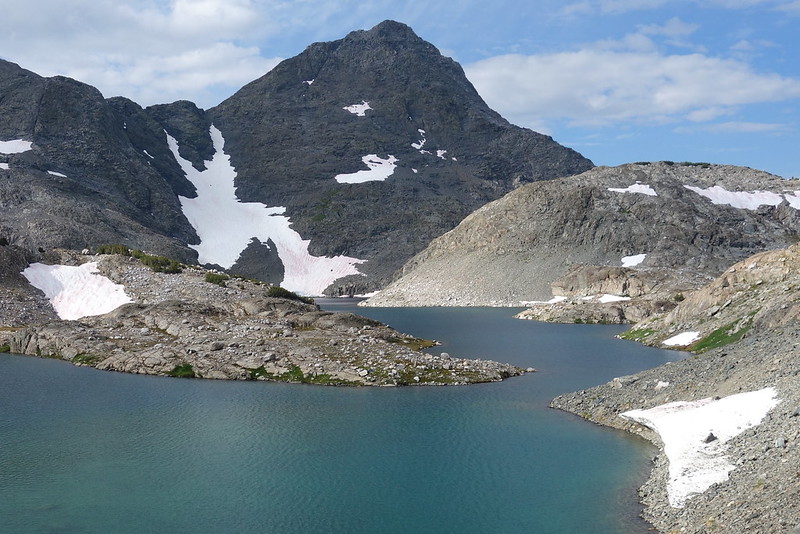 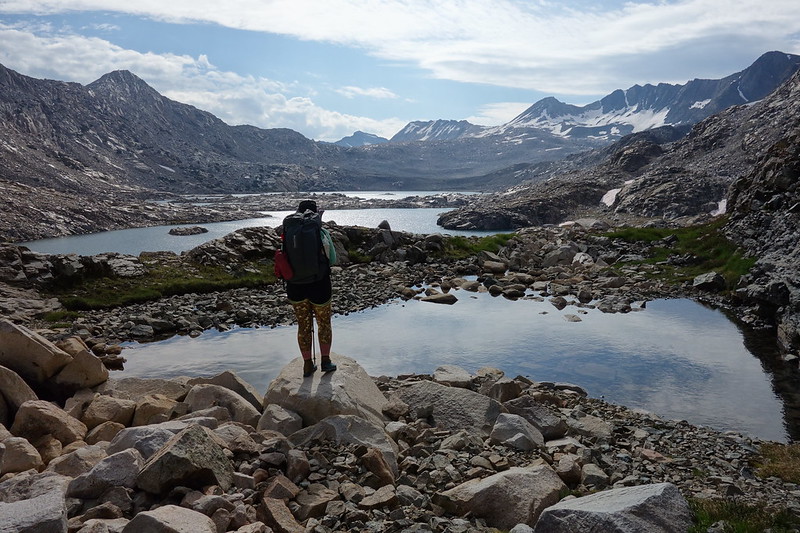 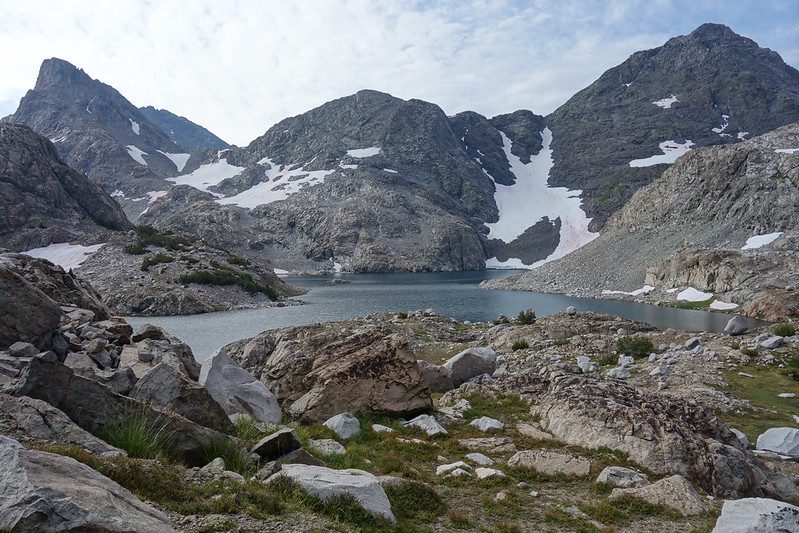 Then we turn away from the lake, and thread through a hidden pass beneath Mt. McGee. The way is lined with small tarns, and dozens of deer tracks, crisscrossing through the grass that grows increasingly thick the further we go. 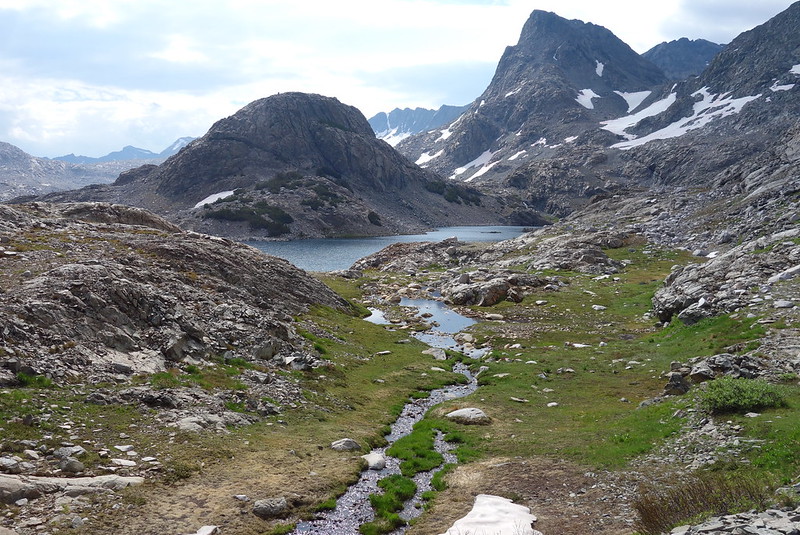 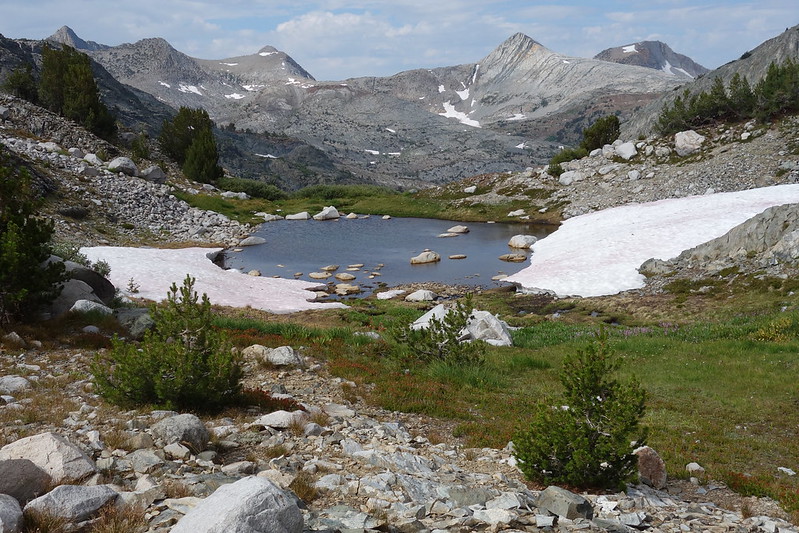 The other side of the pass is another world: a verdant valley, watered by hundreds of tiny, trickling streams. A thousand feet below, the North Fork Goddard cascades down its steep canyon. 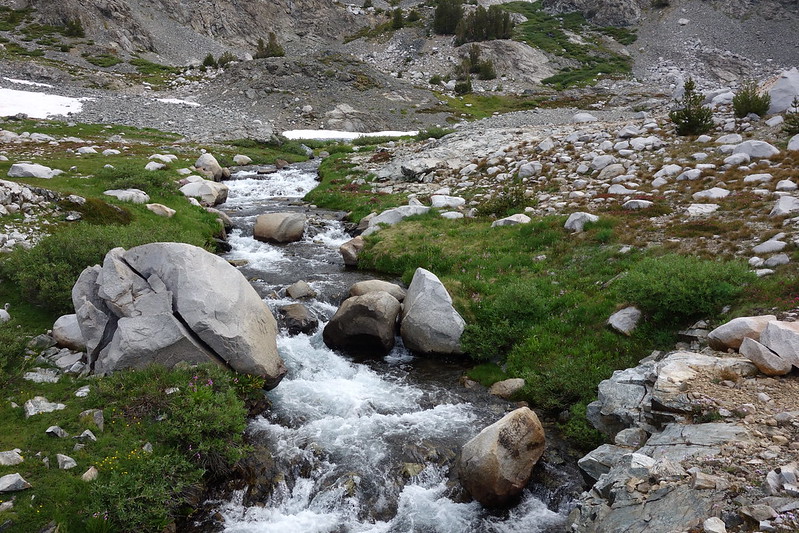 We scramble down to the creek, then follow it, first through open meadows, then down wooded cliffs. There are occasional bits of boot path, but the way is always obvious—sometimes on one side of the creek, sometimes on the other. 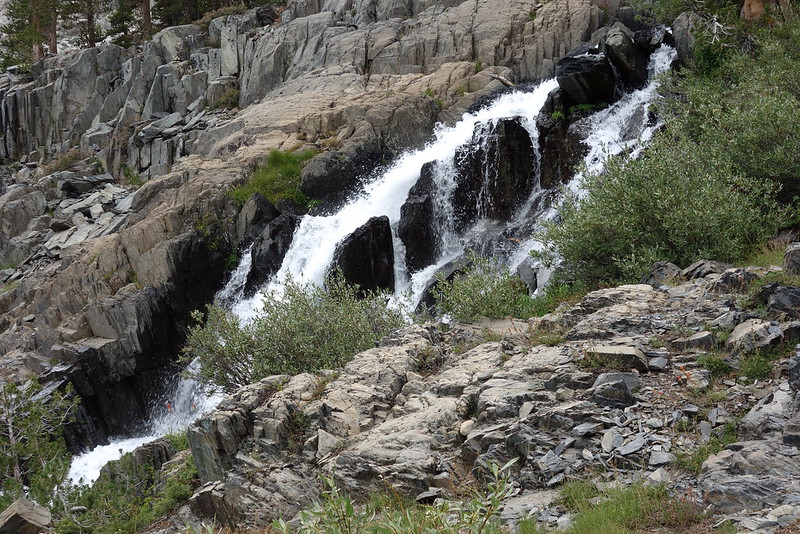 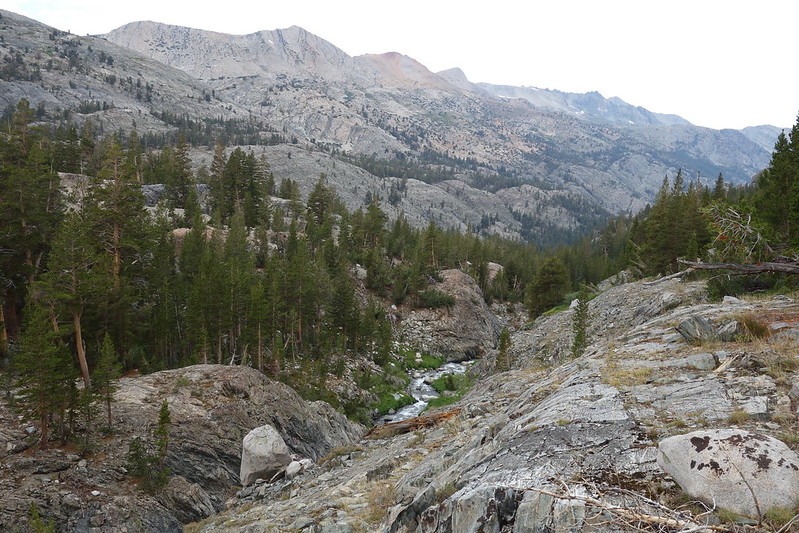 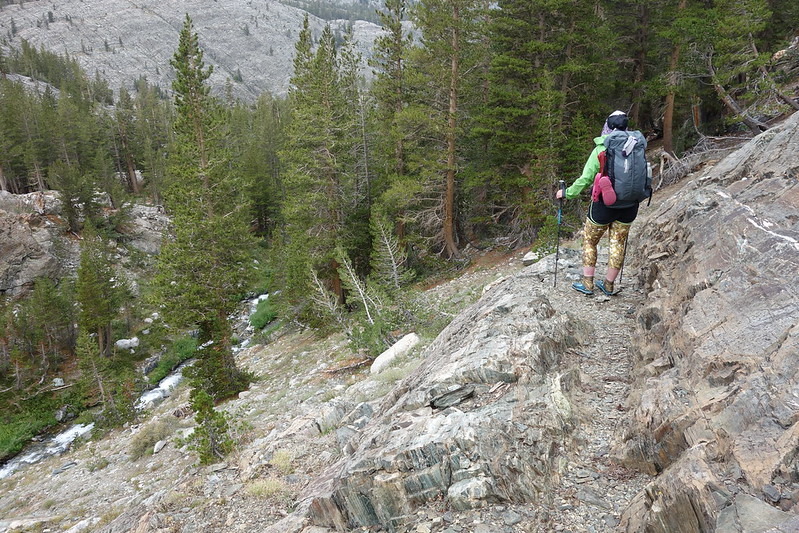 As it approaches the South Fork San Joaquin, our canyon steepens, eventually ending in a set of sheer cliffs. But Krista finds a way through a small wooded notch to the west. On the other side, there’s a grand old abandoned camp with room for dozens of tents, then the San Joaquin, here just a stream, ten feet wide and knee deep. 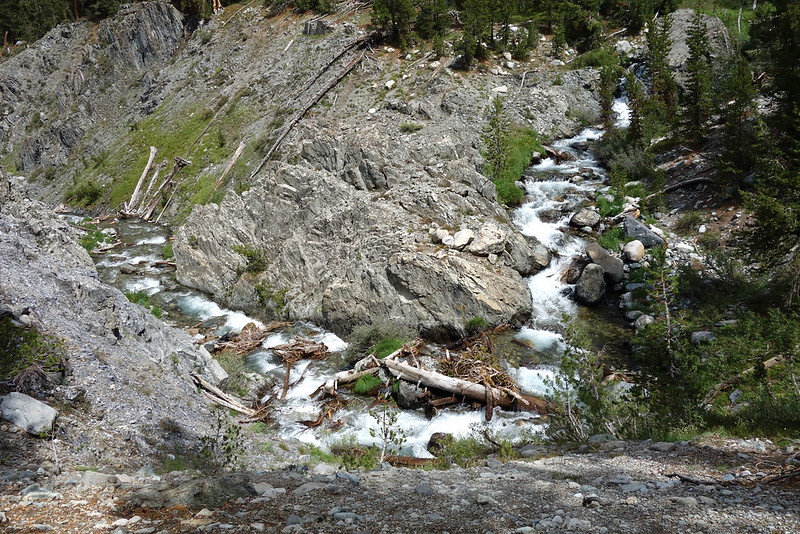 We wade across the river, and find the old Goddard Canyon Trail, here as thin and faded as the occasional boot paths we’ve just been following.

I guess this part of the Park doesn’t get visited much anymore. The trail spends the next few miles equivocating on whether it really wants to exist, eventually settling on a solid “maybe?” But it’s absolutely gorgeous. Waterfalls fall from the Le Conte Divide, as the San Joaquin tumbles itself into a proper river. 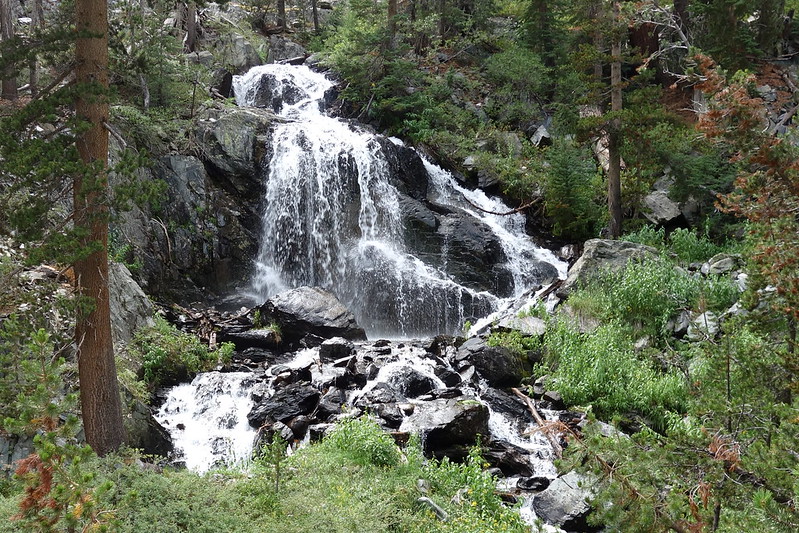 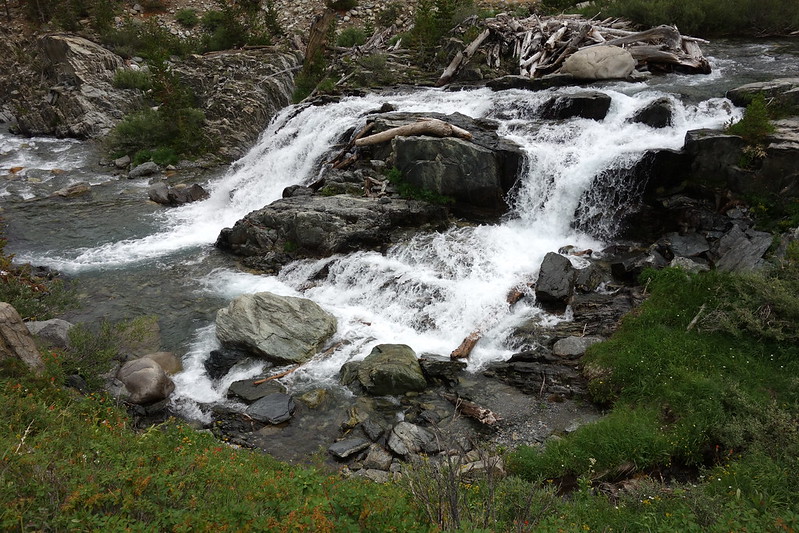 We stop at the mystifyingly named “Pig Chute”—Krista wants to rechristen it the “Taffy Channel”—for lunch, and eat at the edge of a broken rock ledge overlooking the water. The river’s churning so fast here that it almost appears to stop—a standing, solid white ribbon bisecting the valley. 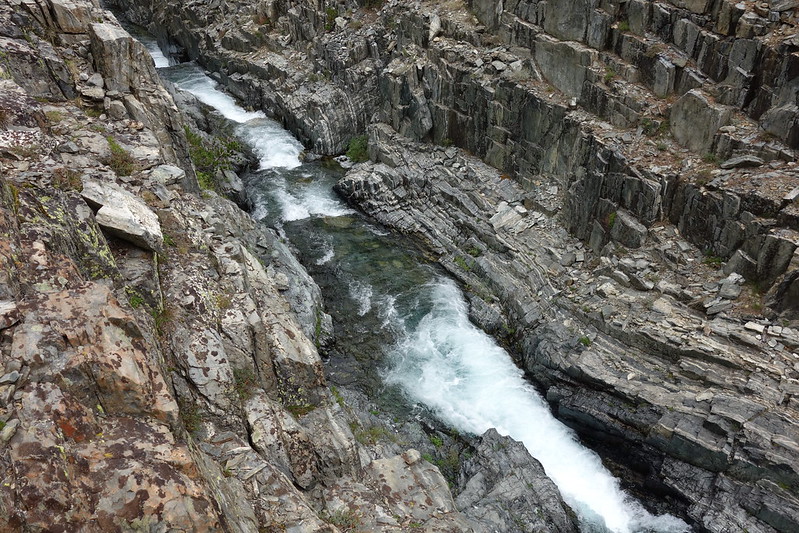 The geology’s fascinating. It feels like columns of sediment have somehow been shifted onto their sides, like gravity has jumped perpendicular and now we’re walking straight up. 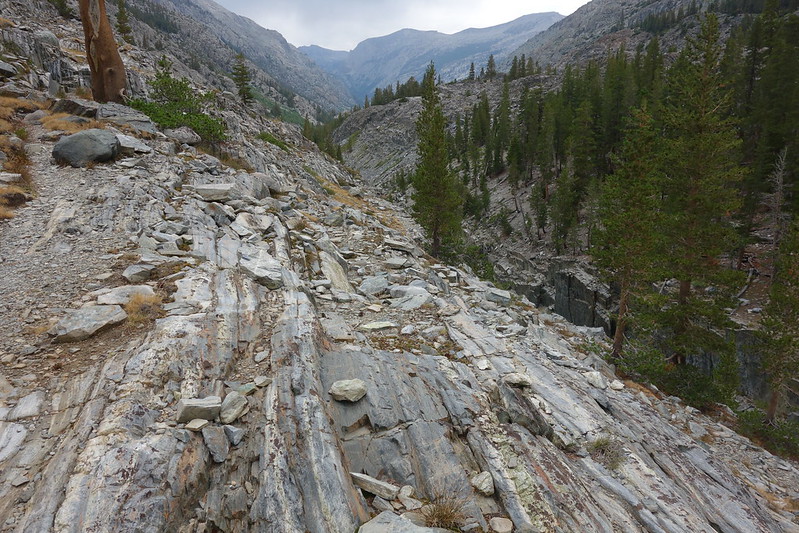 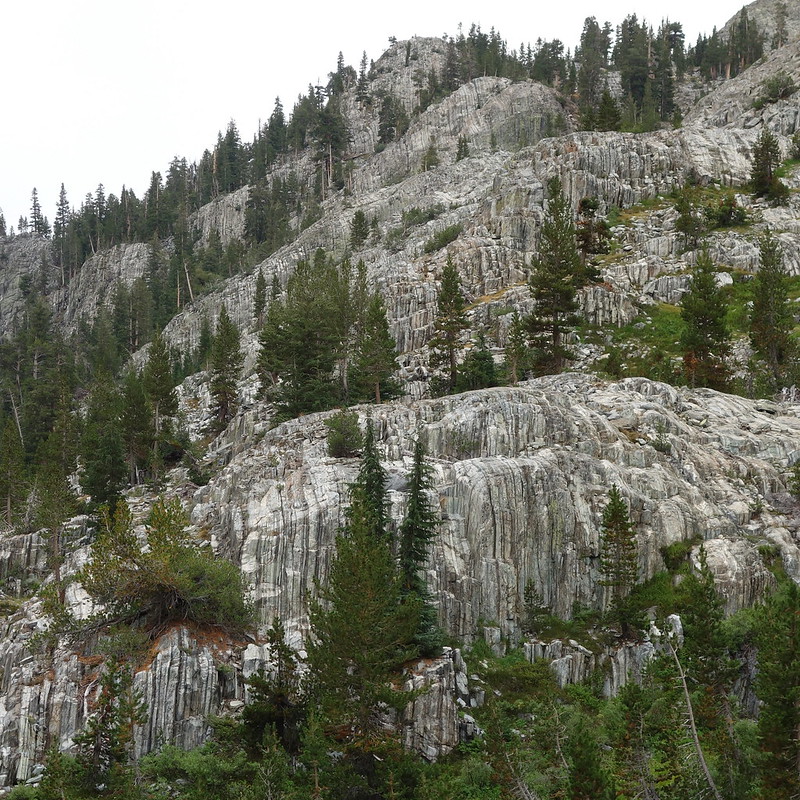 It rains on and off as we make our way down the valley. And the trail drifts into being until we’re on a well-worn path, meandering through recent avalanche rubbish and old camps in Franklin Meadows. 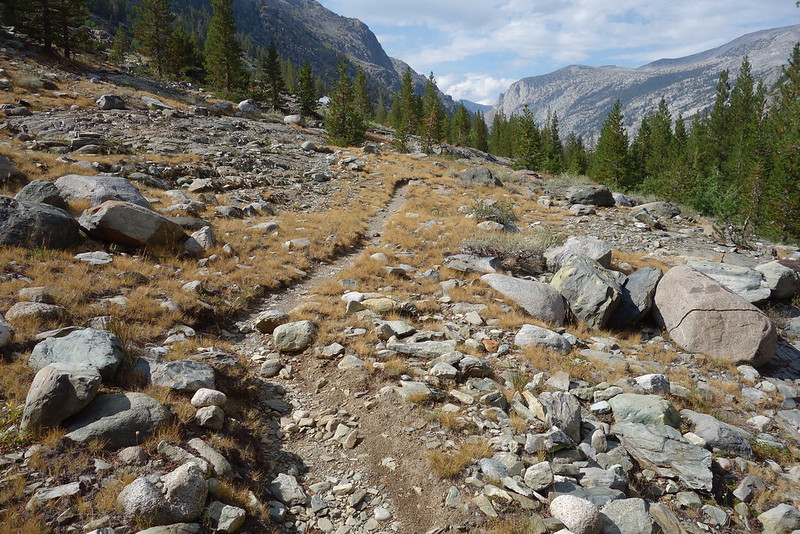 We hit the JMT in late afternoon. We haven’t seen anyone else all day, but now there are three groups, all at once, gathered along the river. A woman on the opposite shore sits disconsolately, her feet in the water, grimacing. She looks exhausted. A group of dudes in their mid-30s with packs towering above their heads trundle across the bridge, unstably swaying in our direction. “Are there any campsites nearby?” We have no idea. Probably? They set up in a wide section of trail a few hundred feet down. Or: they begin to set up, then stall halfway through, and just stare, unfocused, into the trees.

We’re tired too, but not like that, and after a brief pause to filter water, we continue on. Shortly after the junction, Evolution Creek joins the San Joaquin, and doubles its size.

There are posh camps scattered along the river, and a parade of hikers, fresh from resupplies at MTR. Behind one large group, a family of deer follow, seemingly unnoticed by everyone but us. It’s like the wild is winking. “I’m still here, just behind this dude’s 85-liter pack.” 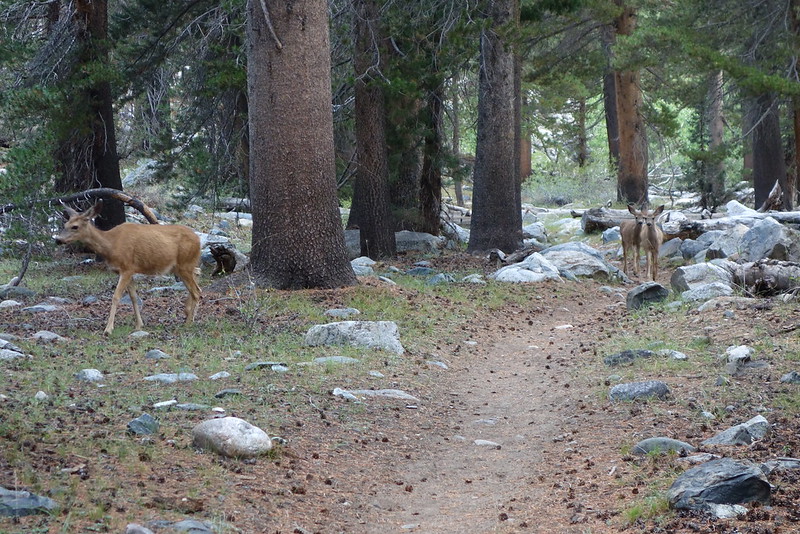 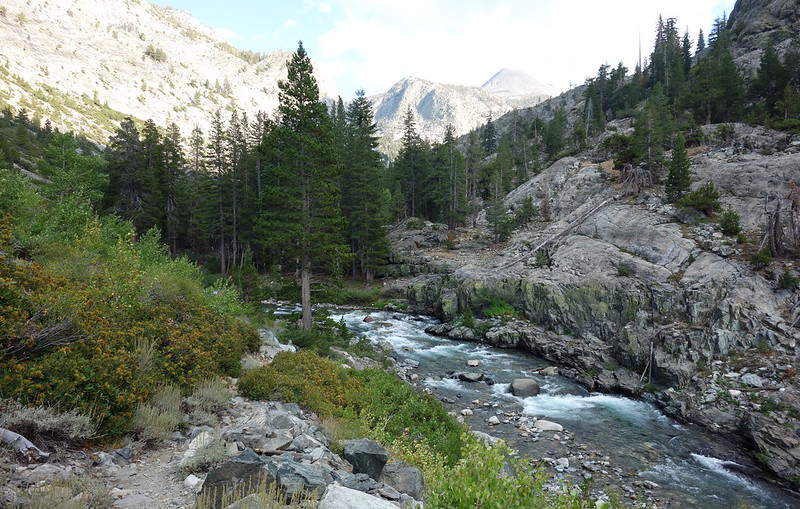 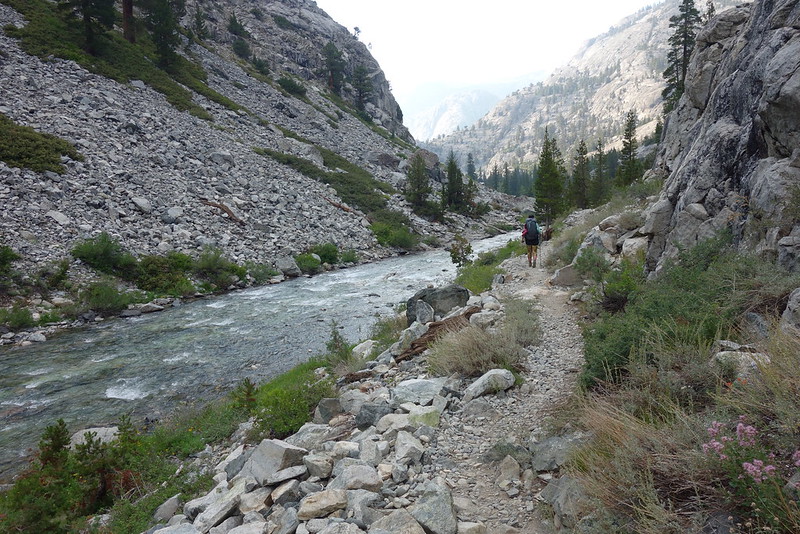 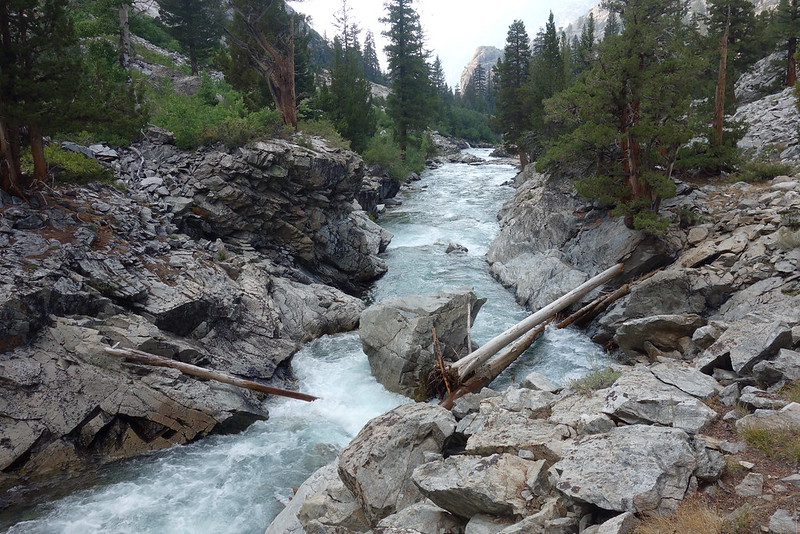 We find a deserted place in Aspen Meadows to set up for the night. Precisely the same place where we set up years ago.

While we wash off, a curious dipper lands on a half-submerged rock in the middle of the river and chirps a strange song that mingles with the white water’s white noise into a stilted harmony—high pure tones submerged under blankets of calming, slow chaos.

I think of John Cage’s remark that he loved sound before he’d ever heard of music. “I remember as a child loving all the sounds, even the unprepared ones. I liked them especially when there was one at a time.”

Here, now, for us, the bird and river are one, tethered to each other in sound. And for the moment, we’re tethered too, part of this old song. 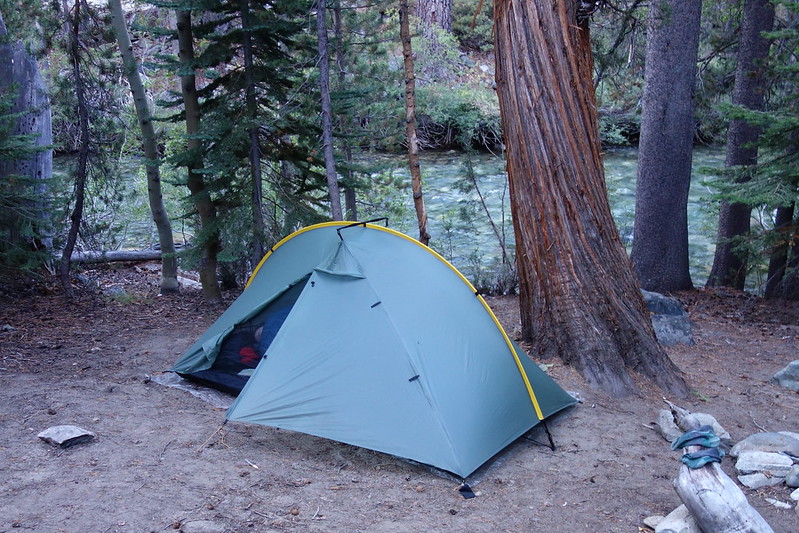