On the trail early today. There’s still a solid mass of clouds to the southwest, flowing steadily over the Black Divide. We hurry out and up, hoping to beat the storm over Muir Pass. Almost immediately, there’s a family of deer, up drinking dew off the morning leaves. And marmots, whistling into the rising air. 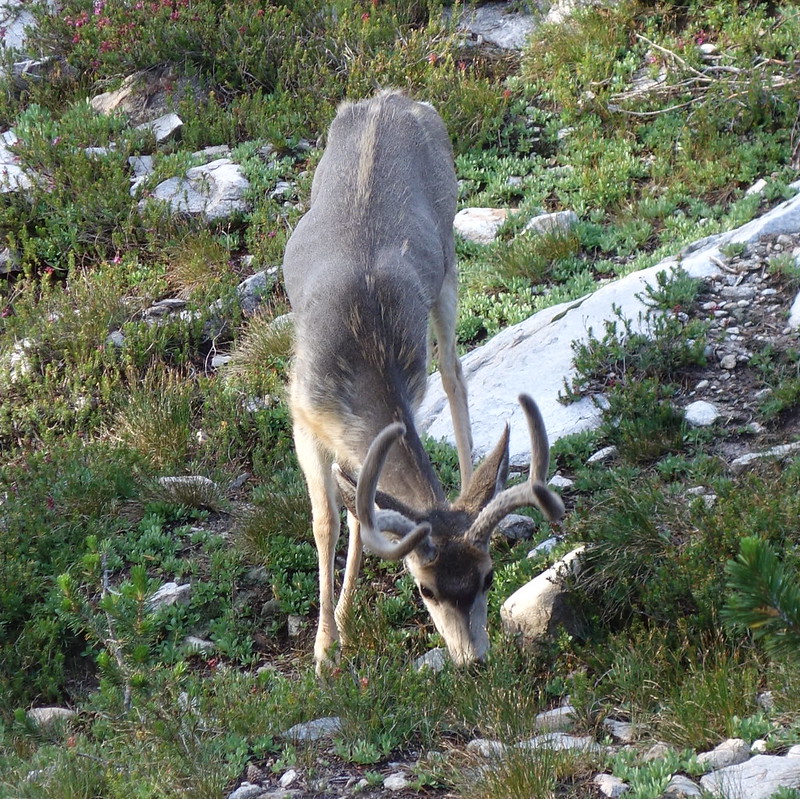 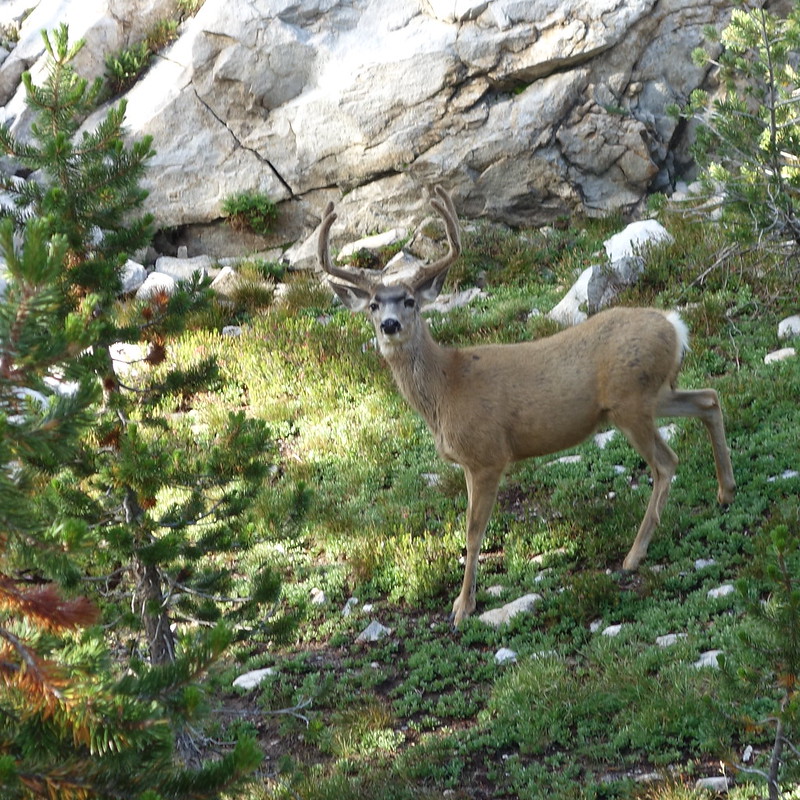 The trail’s easy, switchbacking up through the last woods we’ll see for a couple days, then meandering along a small stream—the uppermost headwaters of the Middle Fork Kings—over increasingly large bits of grey and white granite talus. 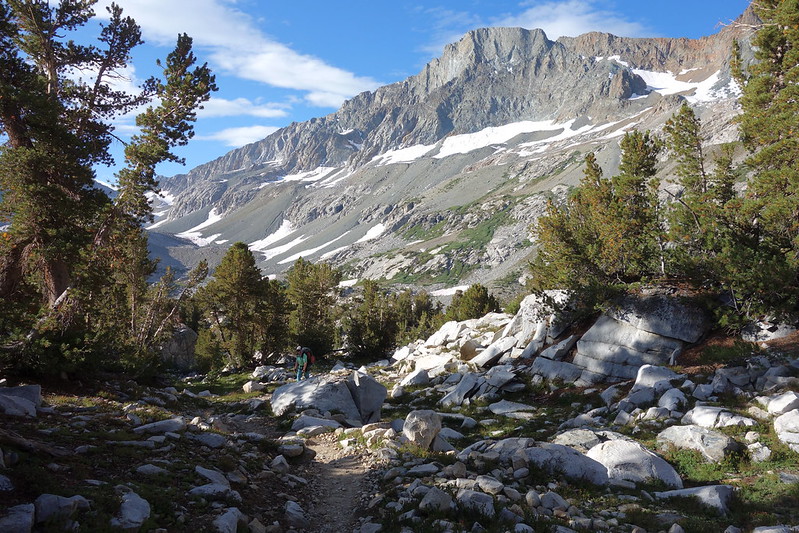 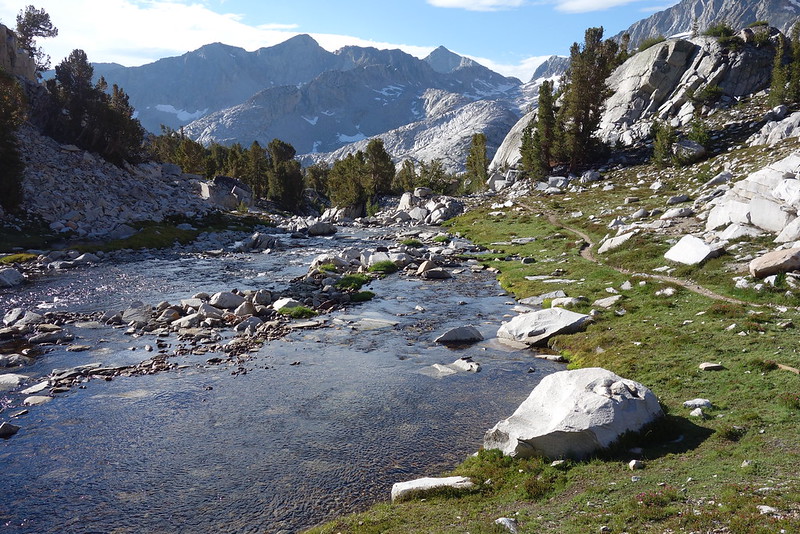 We stop briefly at “False Helen Lake” for Snickers, then continue up into the steep canyons that lead to Muir Pass. The storm’s gaining on us, and rain comes just as we hit the first snow. The trail traipses unsteadily between steep, crumbling peaks. The creek rushes under ice, and lightning flares in the distance behind us. 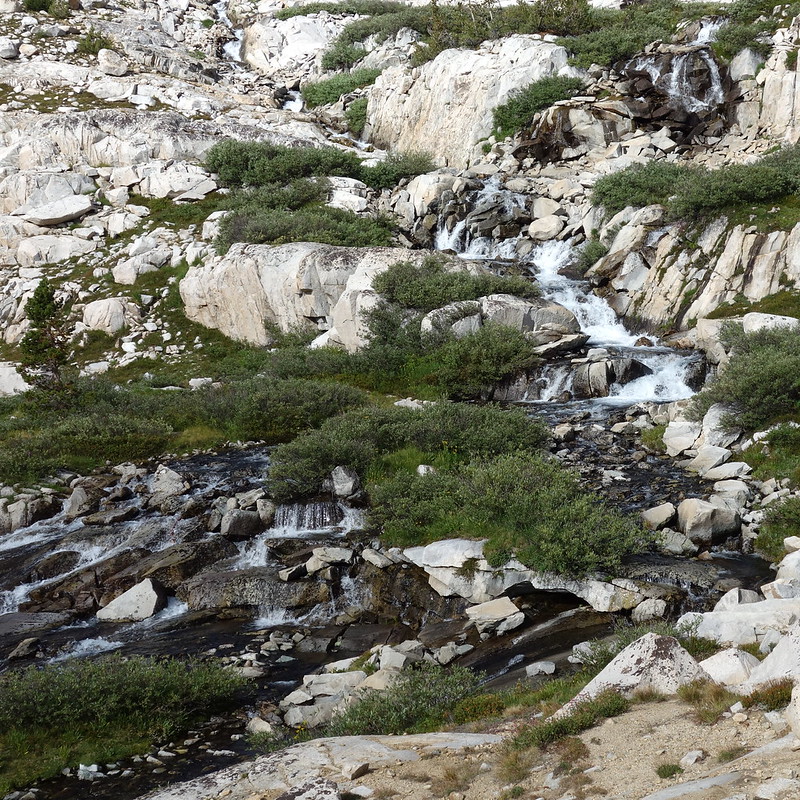 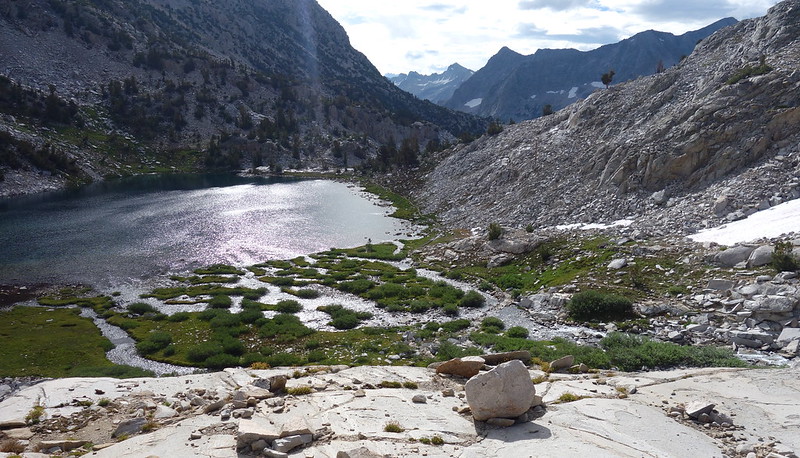 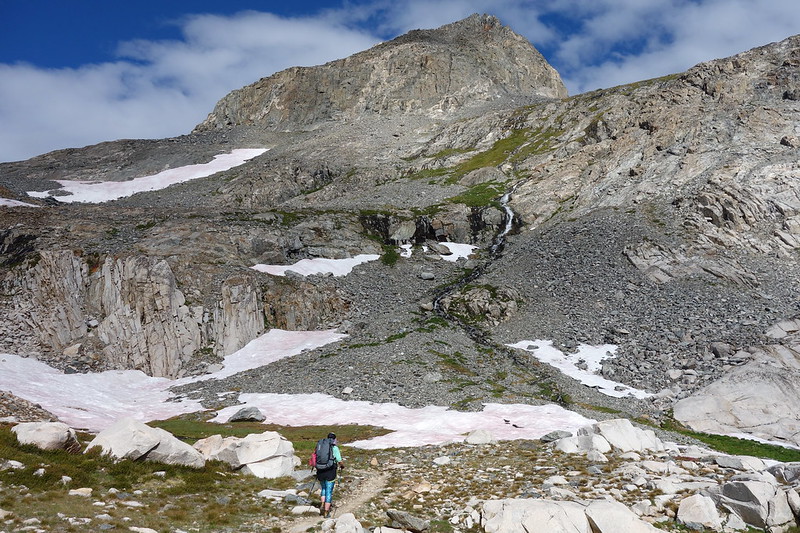 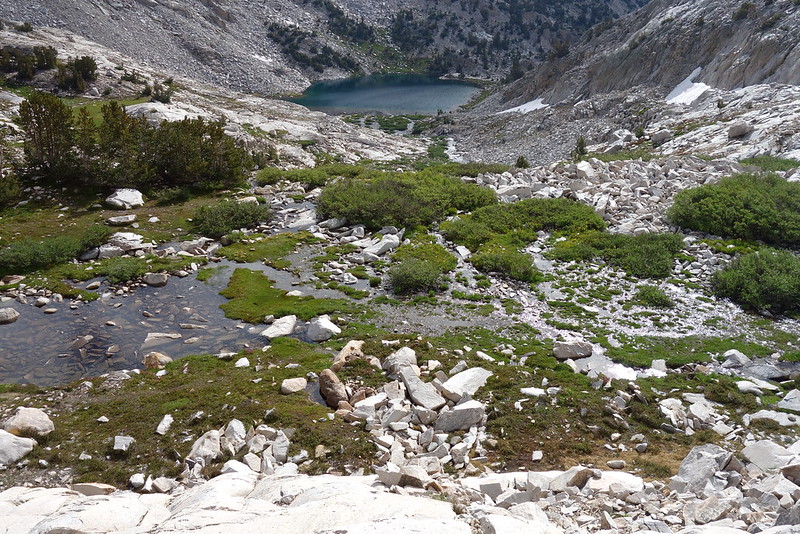 There’s more and more snow, until the trail’s just an indent in a wall of white. We kick in steps in the steeper parts. And the rain’s driving now, on its way to hail. 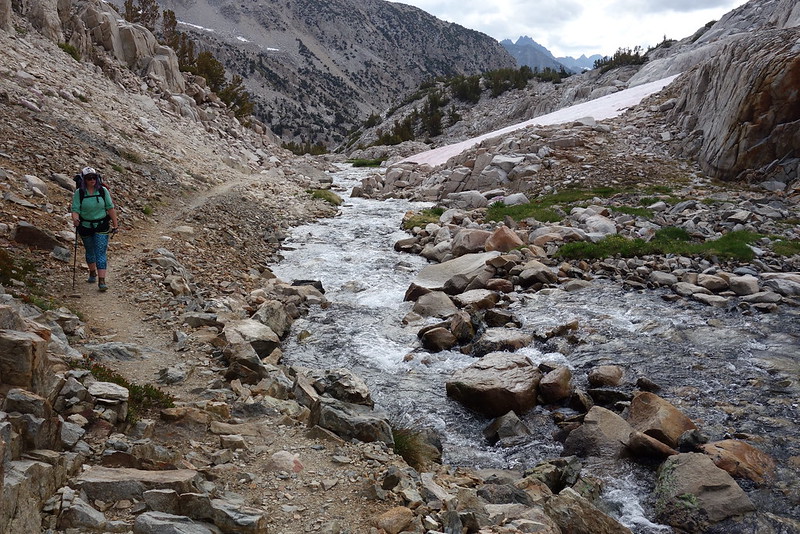 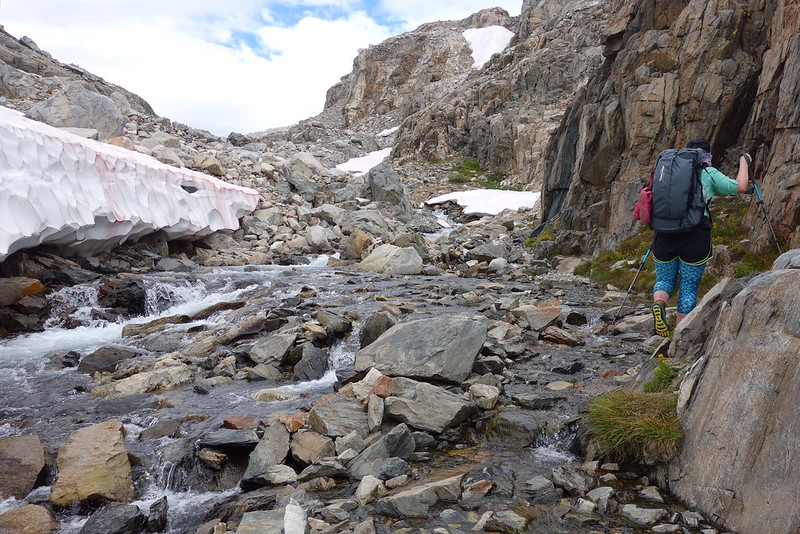 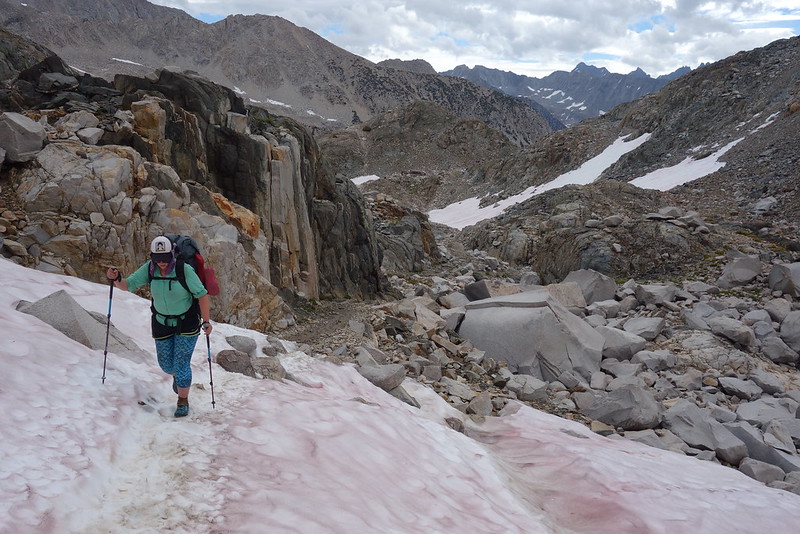 Krista stops, hand on her hip. “Well.” She smiles. She always smiles at times like this. “This is different.”

Real Helen Lake is enormous, like an inland sea ringed with white snow-sand beaches. It’s named for John Muir’s youngest daughter. She was a sickly kid—growing up, she had tuberculosis so bad that they had to move her from coastal California to Arizona for the ostensibly healthy air—but she made it. 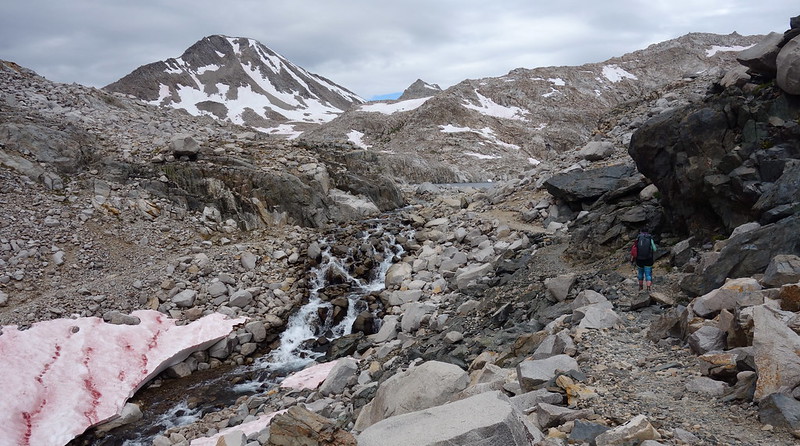 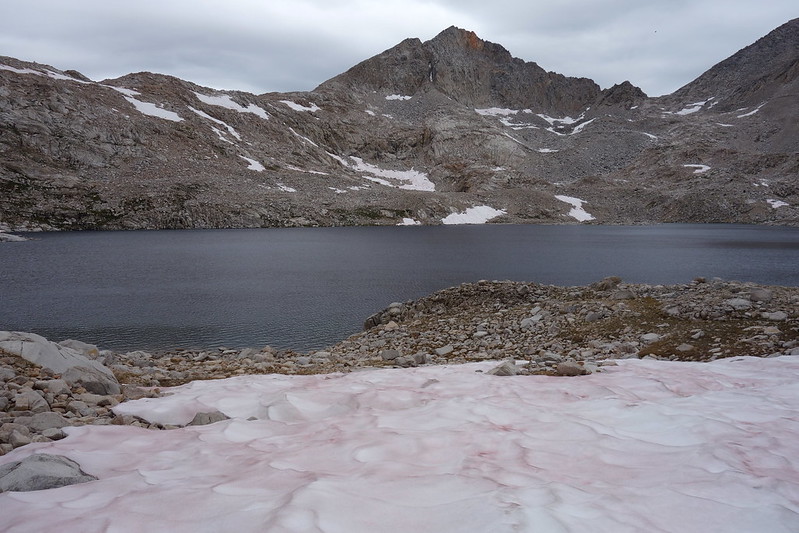 She was obsessed with trains. When she was eleven, John granted the Santa Fe Railroad an essentially free right of way across the family’s property, so that they’d build a rail line that would go by Helen’s window. She memorized the timetables and the different trains that would pass. She sent away for books about the railroad, always requesting copies for “HL Muir,” worried that they wouldn’t send them to a girl. 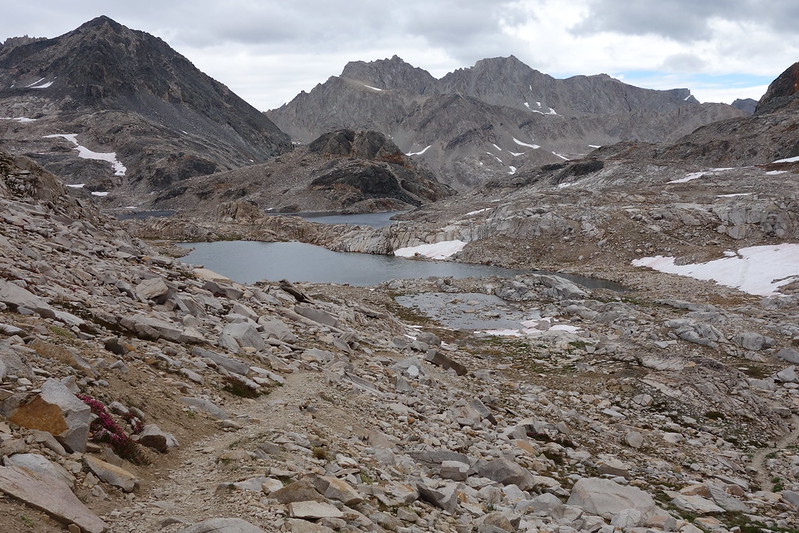 The further up we go, the more the storm gains. It’s one of those situations where you just have to put your head down and walk. So we do, and sooner than I’d expected, we’re standing on the top of the pass, inside the Muir Hut, huddled with a dozen strangers waiting out the storm. 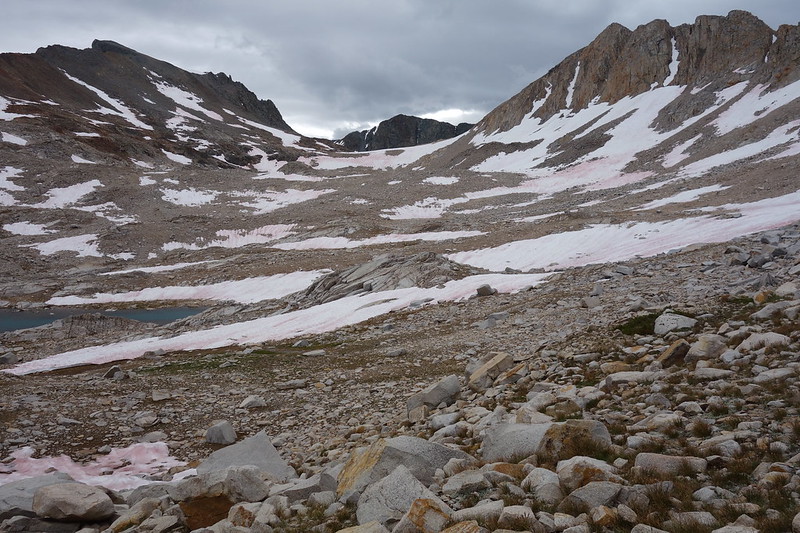 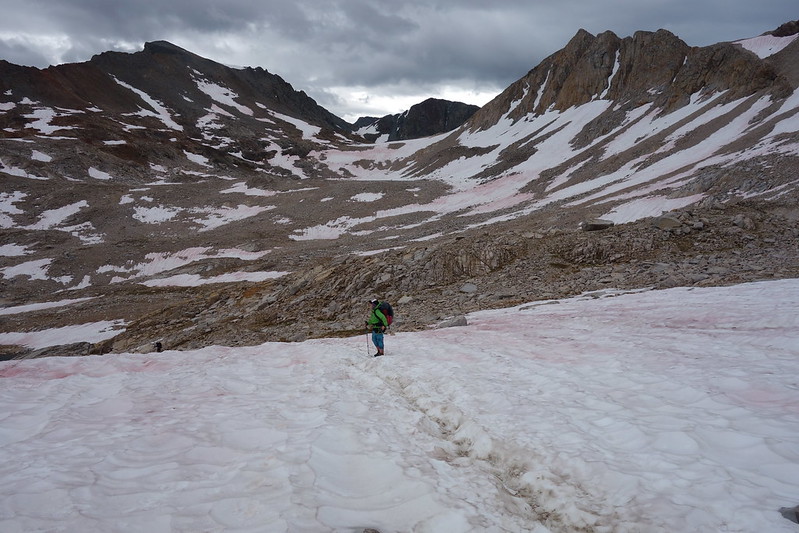 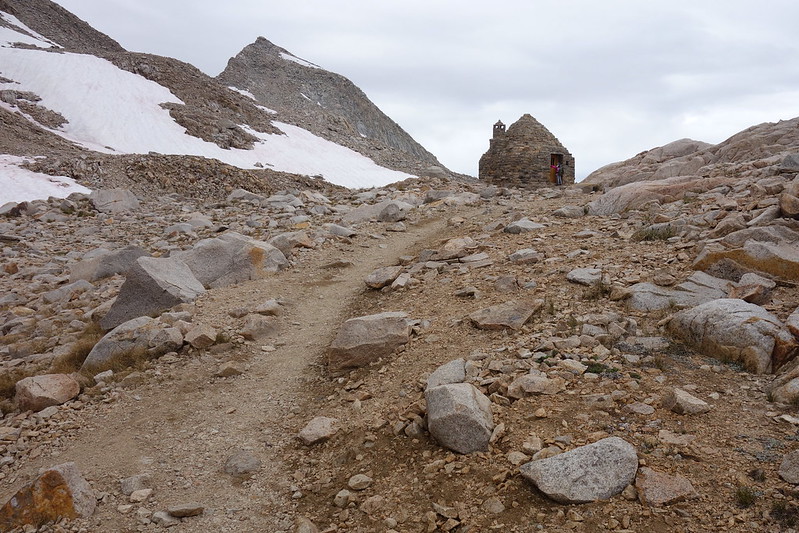 It’s funny to suddenly be so close to so many people, breathing foggy breath and stinking, piled on top of each other as the wind wails outside.

We don’t stay long—just enough for a quick snack—then we rush out, afraid that we’ll lose our nerve. When we crack the door open, the wind pushes it the rest of the way, and it slams against the outside wall. “We’ll, uh, just…” I look back in at the motley group, embarrassed. “We’ll just be going.” Then it takes me a solid two minutes to force the door closed.

The wind outside is still so strong that it almost knocks me off my feet. But the sky west, where we’re headed, is tinged with blue. 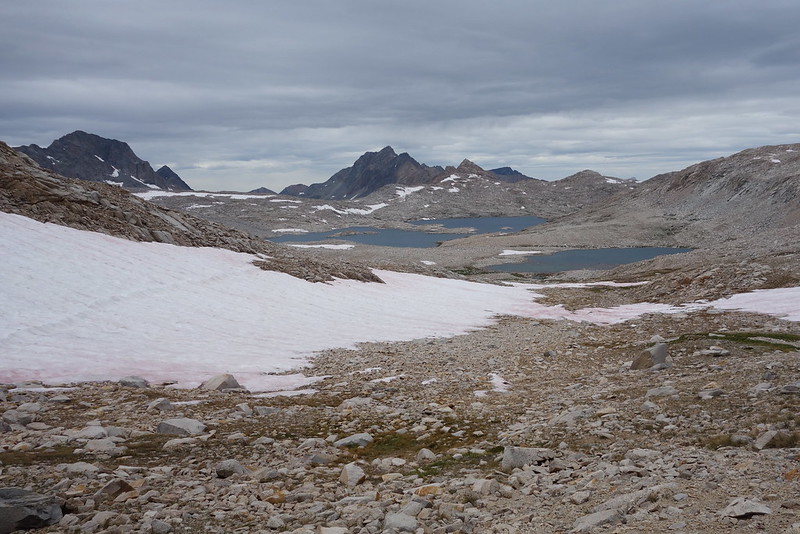 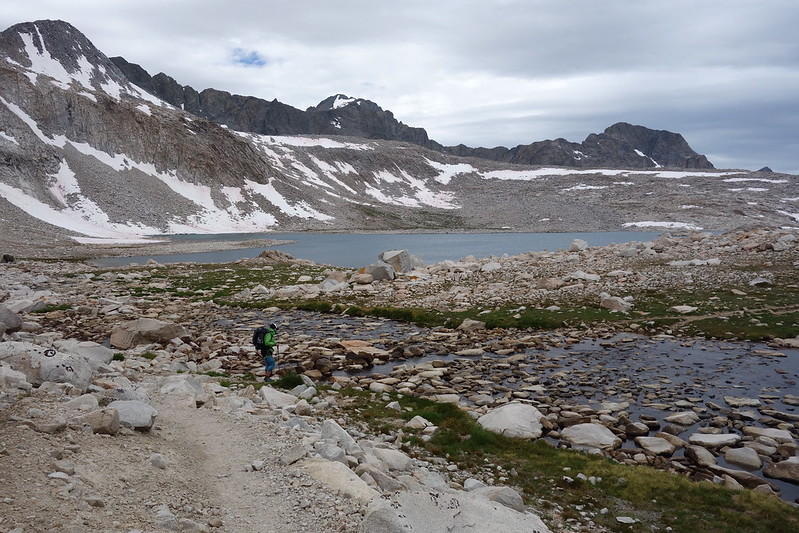 Things improve as we walk down the rocky slope toward Wanda Lake, named for John Muir’s oldest daughter, Helen’s big sister. Unlike Helen, Wanda spent most of her life in coastal California—in college, then with her own family, living on the Muir property in Martinez. After Helen came down with TB, they didn’t see much of each other. But Wanda, Helen, and John did all go on a ramble up here together, the summer before Helen got sick.

Walking down through the easing wind, I think of them. And of hiking with my dad and brother, before I got sick. 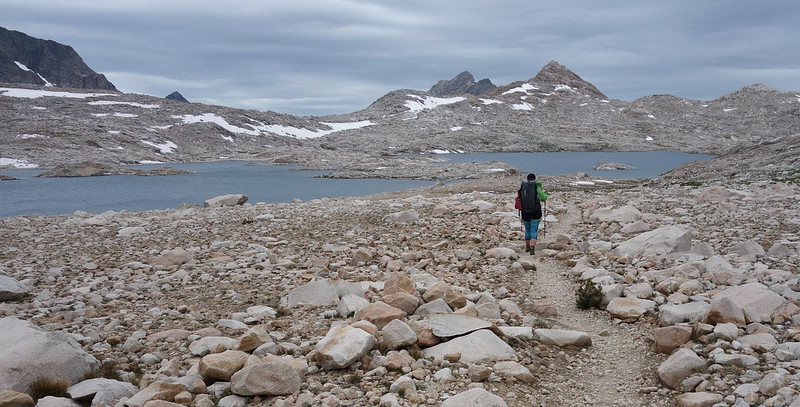 We leave the trail at the lake’s outlet, then cut southwest, up an easy talus slope toward what we’re calling “West Wanda Pass”—a low point in the ridge that separates the Evolution and Goddard drainages. There’s a path, but it’s braided and faded and we end up just making our own ways through the rocky jumble. 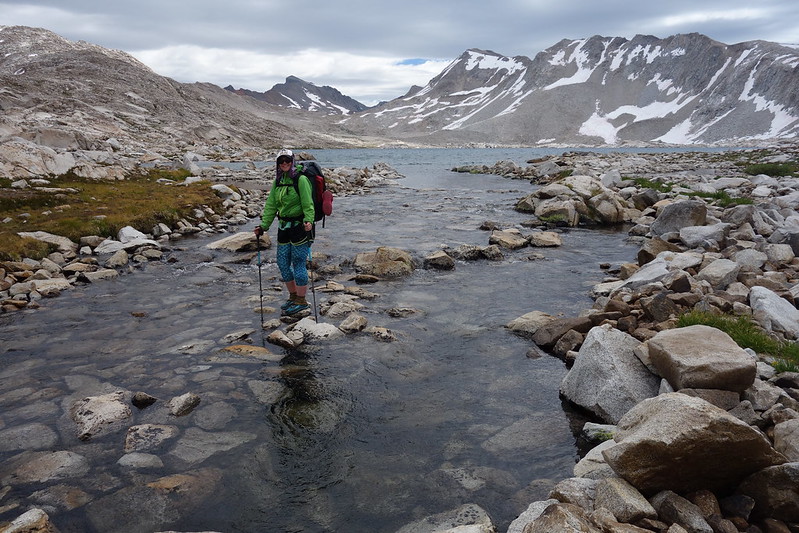 At the pass, there’s a series of small tarns, icy clear pools, punctuated by tiny talus islands. We look down on Wanda Lake, but it looks different now, wilder. That now familiar feeling: as soon as the trail’s gone, so is all the civilization that comes with it, and it’s easy to imagine this as a primordial place, almost unseen but for a few people—Muir and his daughters. How miraculous it must have been to scramble up miles of unexceptional talus only to end here. 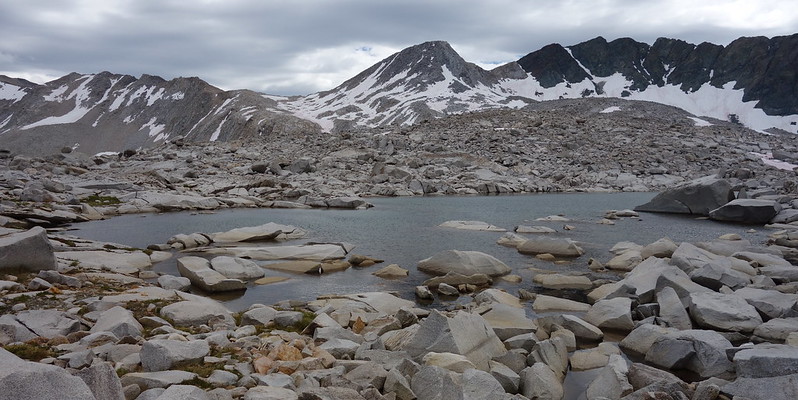 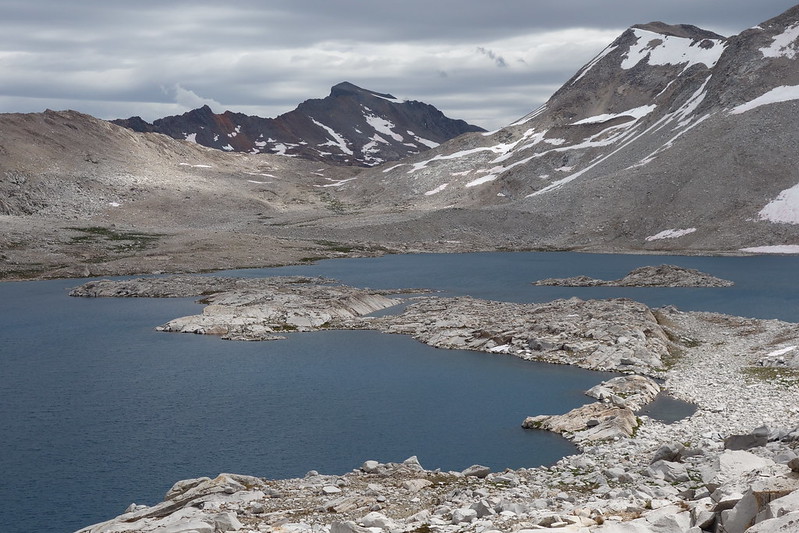 The way down to Davis Lake is rough. At first, it’s just a bit of route-finding, but as the slope gets steeper and the rocks bigger, things become less stable, and every step has to be taken tentatively, for fear that things might shift beneath.

We make our ways down slowly, helping each other through the scary sections. A few times, rocks start to slide, and we both hold our breath. 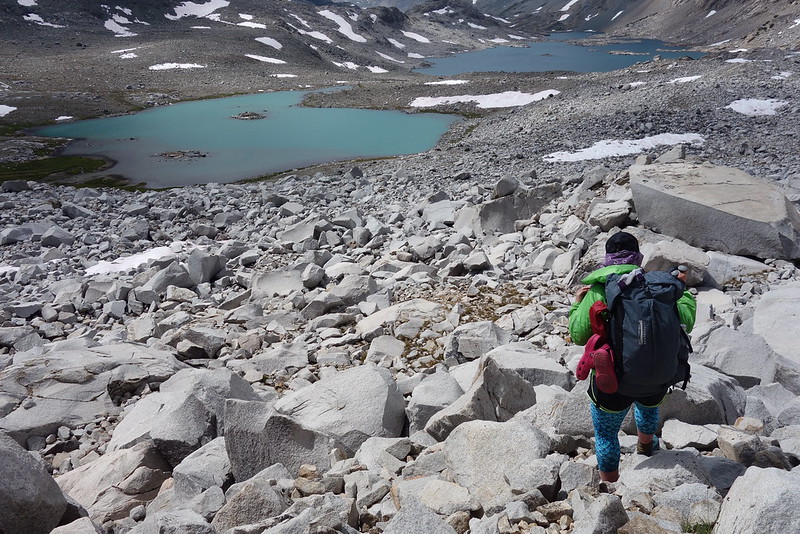 But we make it down all the same, and eat a late lunch on the side of the uppermost Davis Lake. Silt from the glacier above’s made the water a milky blueish green, and the wind—the remnants of the storm that’s still hammering on the other side of the divide—is causing waves, which break and crash into the rocky shore. Again, an ocean. 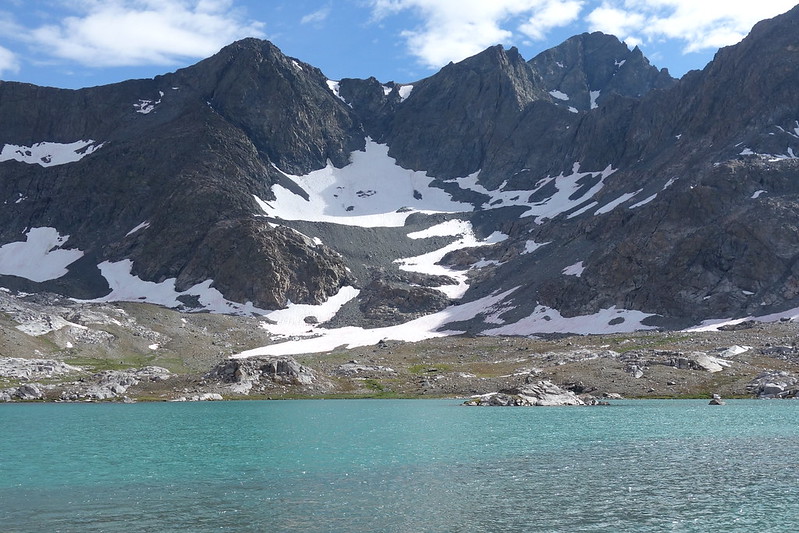 We spend the afternoon in a disconsolate shuffle across the unstable talus along lower Davis Lake’s southern shore. I bonk. Krista bonks. We worry about finding a place to sleep in the rocky jumble, and finding our way out of here, and literally everything else a person can worry about.

The lake is split by a land bridge that, but for a two or three-foot channel for water to rush through, spans the entire thing. The southern shore that we’ve been following is getting increasingly steep and seems to cliff out a quarter mile down the way, so we decide to cross, and try our luck on the other side.

Almost precisely halfway across the bridge, the terrain mellows, and there’s a clearing big enough for a tent. There might not be another spot like this for a while, so we stop for the day, and setup.

I feel instantly better. The light’s starting to soften, and the rocks on the north side seem smaller and more stable than the ones we’ve been pushing through. There’s even something like a use trail visible a half mile down the way. 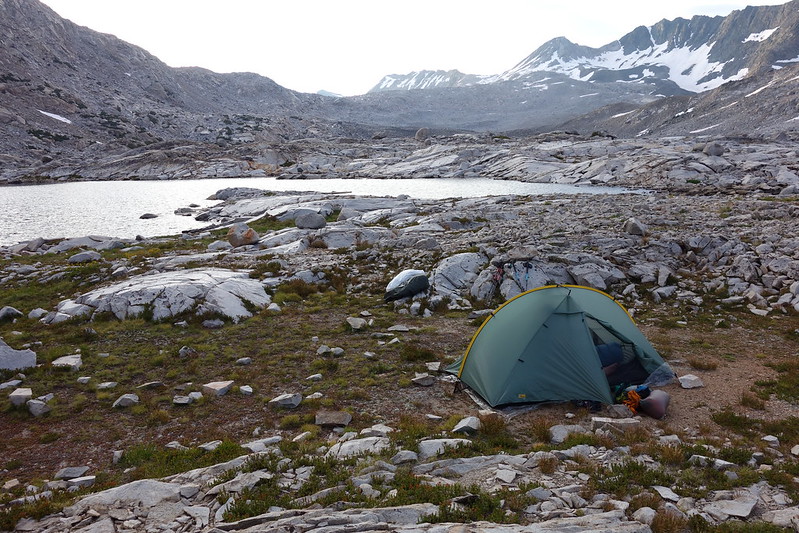 We put up the tent, cook dinner, make some tea. It rains on and off, but always softly. There’s still a storm across the divide, but only small shards of clouds are making it over. They turn red as the sun sets. Then the stars, more lonesome than I’ve ever seen. We’re the only people in this basin, probably the only people for miles. The world stretches out, whispering its secrets. I think again of John Muir and his daughters, what they must have seen a century ago.