“So,” Krista’s looking up at the granite shelf south of our lake, squinting. “I think we could probably just climb over that.”

Small snowmelt streams are trickling down the steep, smooth granite. I can see absolutely no way up. “Oh,” I hesitate. “Oh…” Another pause, this one a bit longer. “Totally.”

So we climb up the ridge—Krista, of course, in the lead—through a series of hidden shelves, and meet a million tiny tarns set in a seemingly endless expansive of grass and granite, which stretches from one horizon to the other. 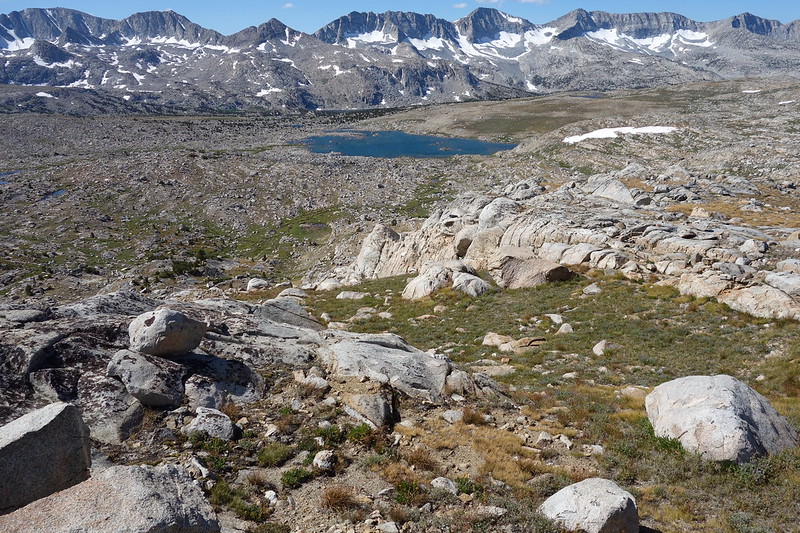 This place feels like a microcosm of the trip: just a little out of the way, but far enough to feel like a different universe, far from the well-trampled trails the madding crowd. 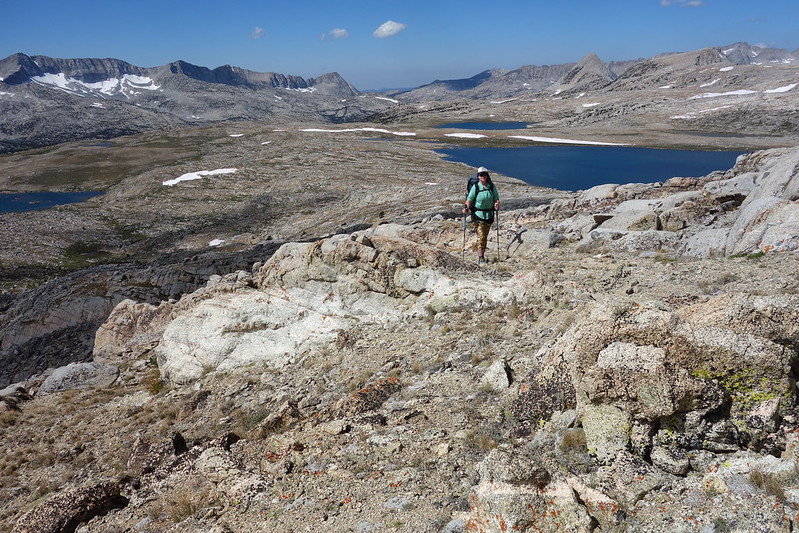 Then down though snow and streams to the largest of the Humphreys Lakes. Our map shows a trail somewhere around here, but there’s absolutely no sign of it—just thin grass and granite shelves and a vast lake, on its way to becoming a river. 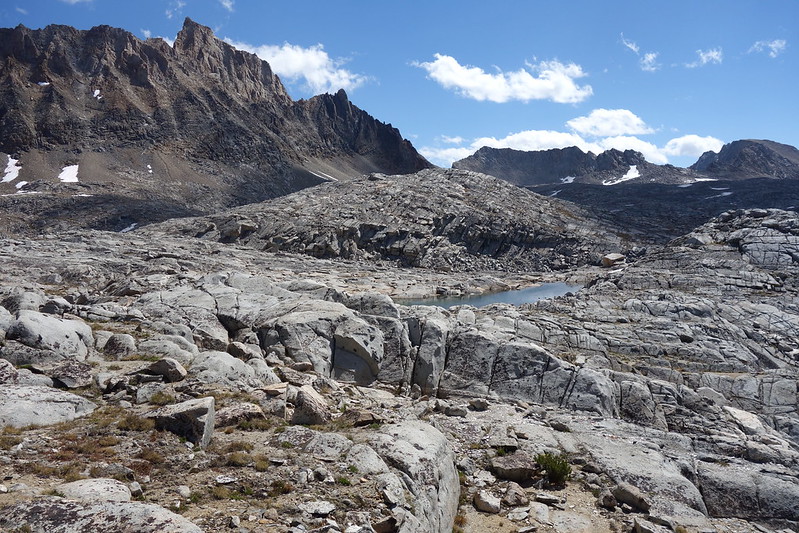 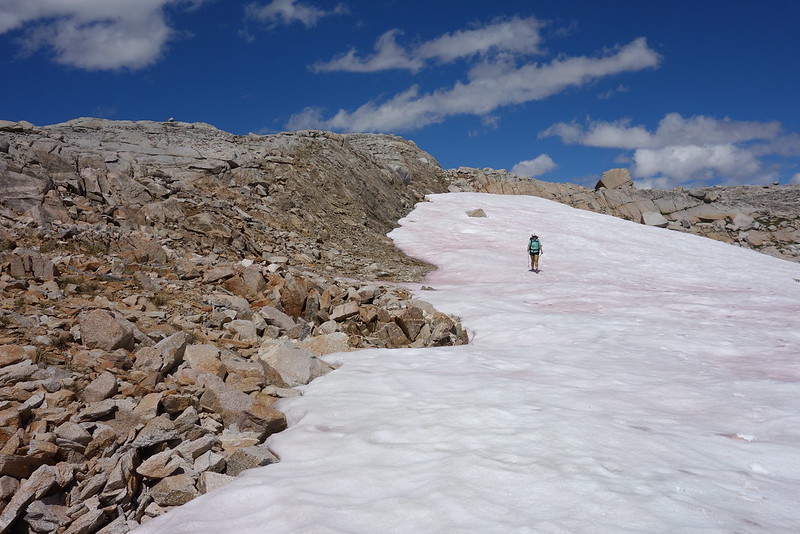 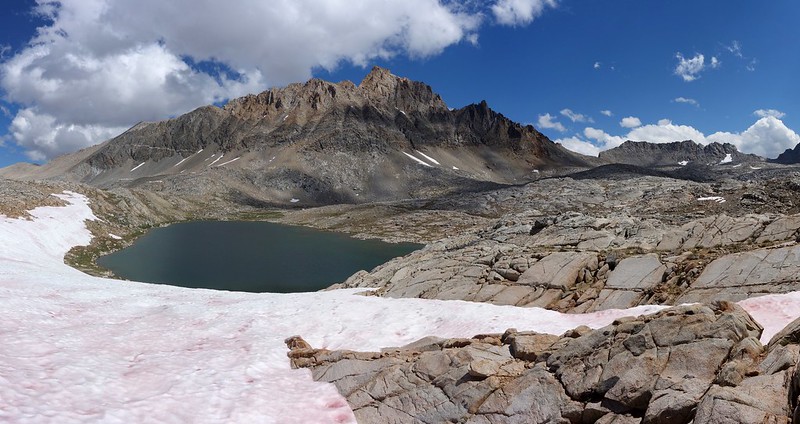 We scramble down the outlet stream, following the route of least resistance back toward the Piute Pass Trail. The water here’s incredible: lakes and streams and everything in between. 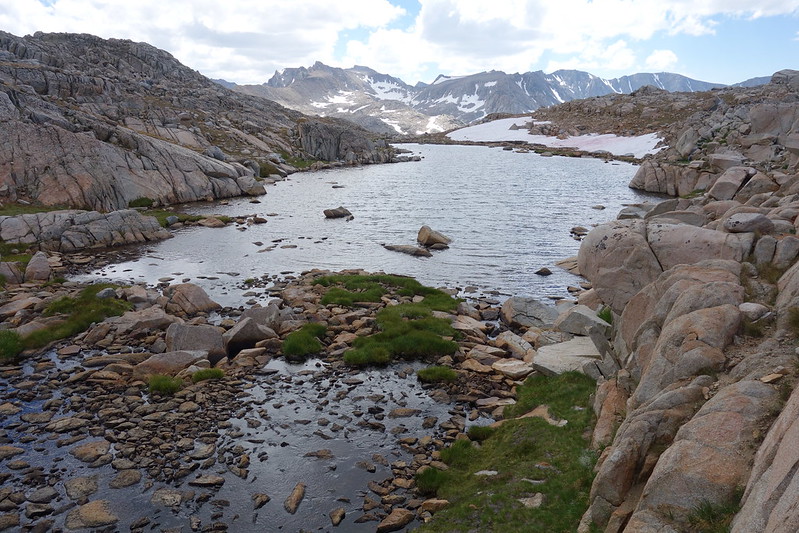 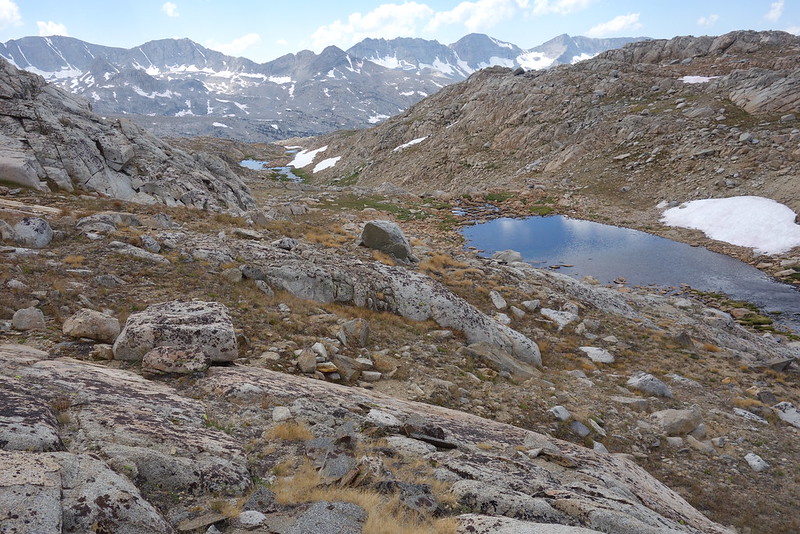 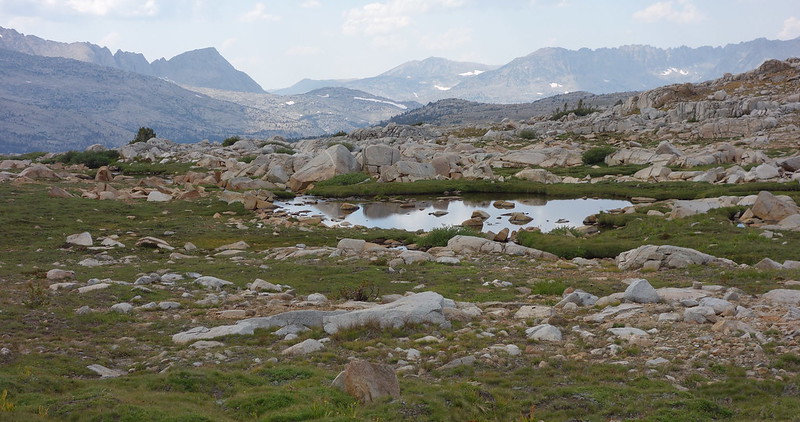 We stop at the steep shore of Cony Lake for an early lunch, and watch the dark black edge of a storm seep over the Glacier Divide. “Oh well,” I think. “It’s our last day. I can deal with anything for a night.” Krista looks like she’s heard me thinking. “Well, you did say you wanted to see some weather…”

The way from Cony to the trail is a steep, blooming canyon, split by several streams that aren’t quite parallel, but somehow still seem to never intersect. It’s easy, fun walking, even though a little rain’s already coming to greet us. 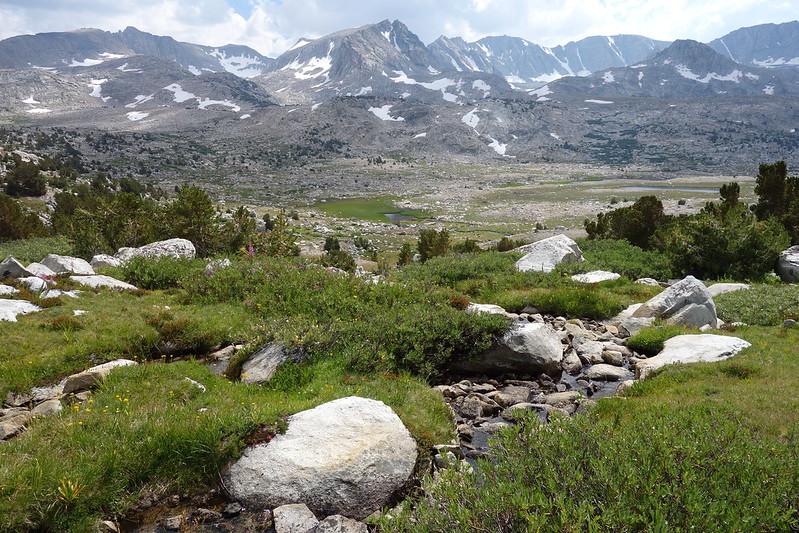 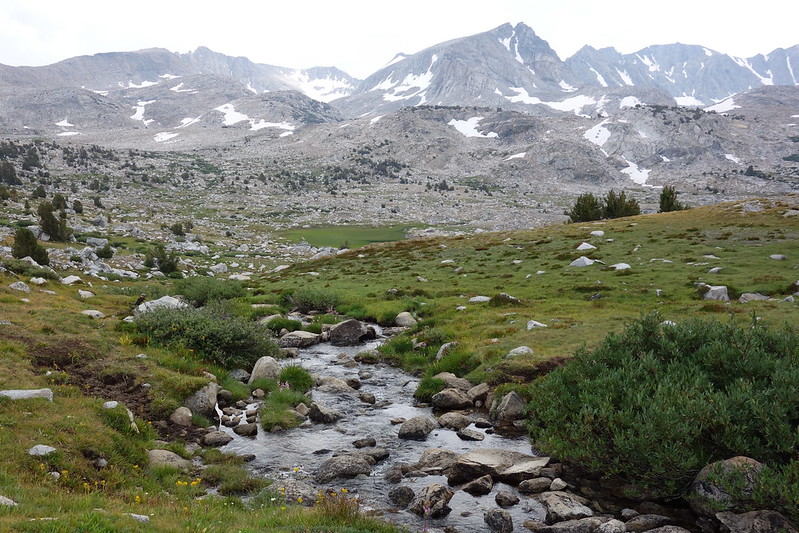 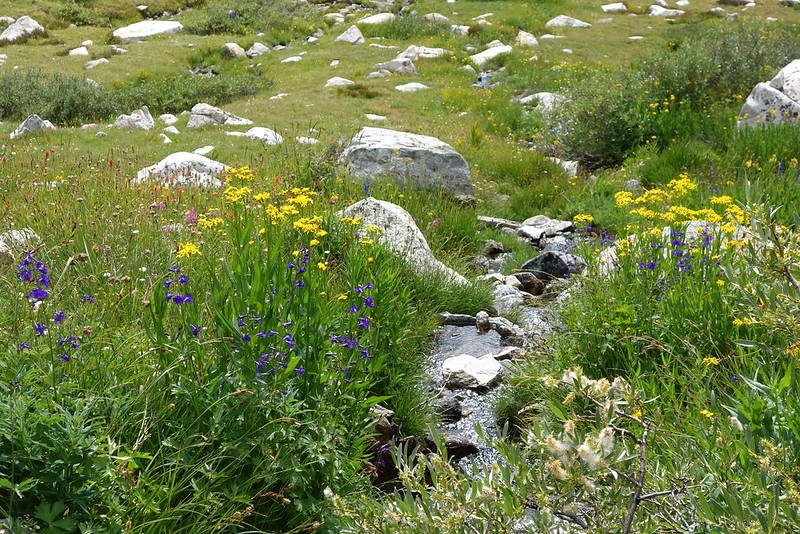 We join the trail, then cut east, almost all the way to the pass, through fields of yellow and purple. 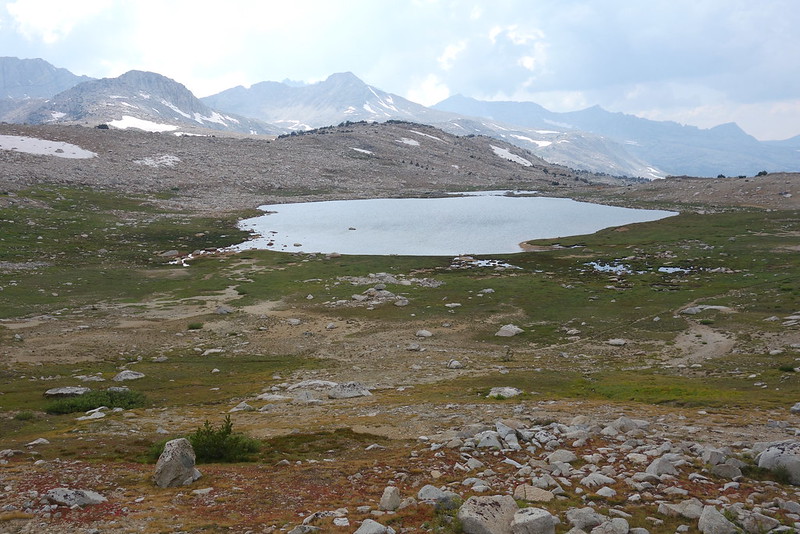 The trail circles Summit Lake, then we turn off on intermittent tread toward Muriel and the WAHOO (yes, all caps) Lakes.

Muriel Lake’s nearest shore is surprisingly crowded with campers—we realize later we’re just maybe six or seven miles from the nearest trailhead—but Krista finds a secluded spot on top of a hidden hill, and we set up. 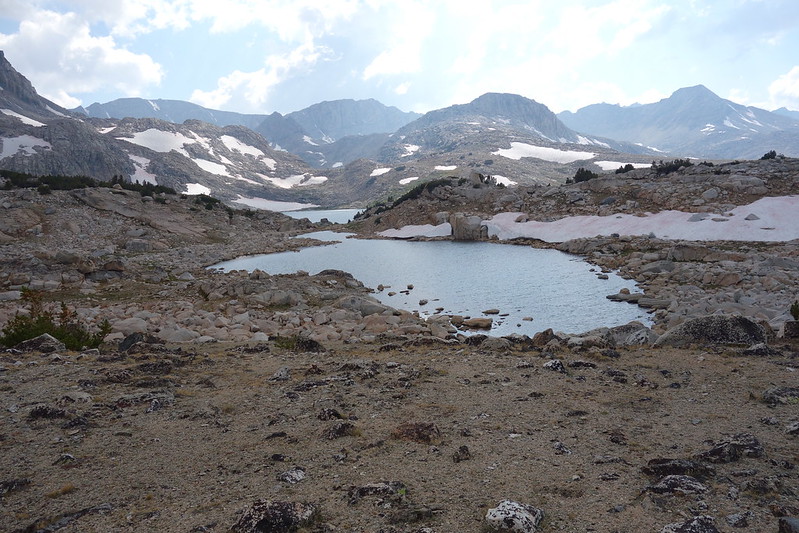 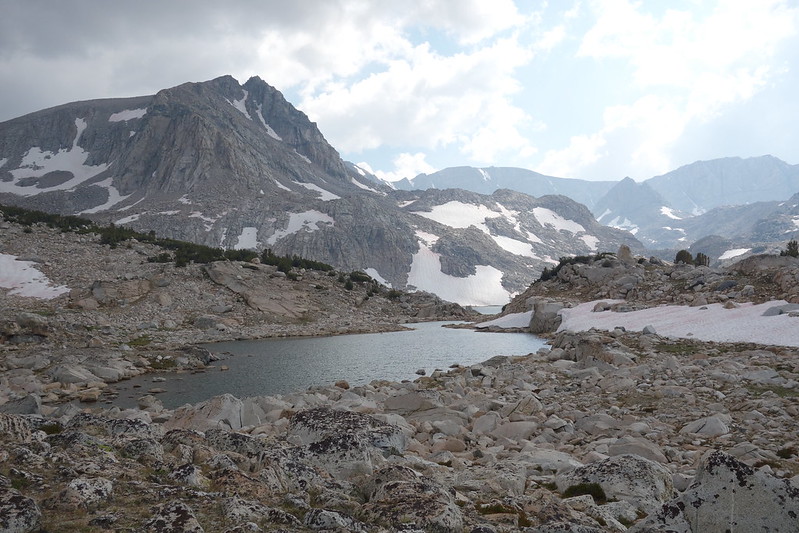 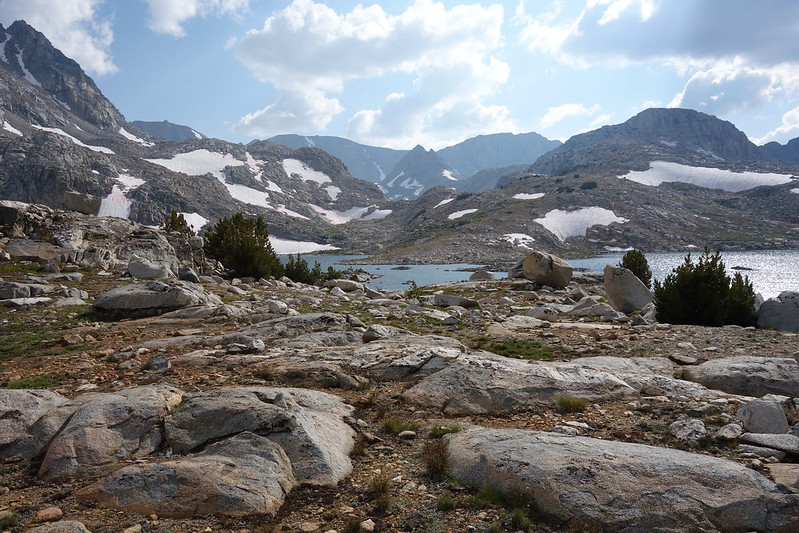 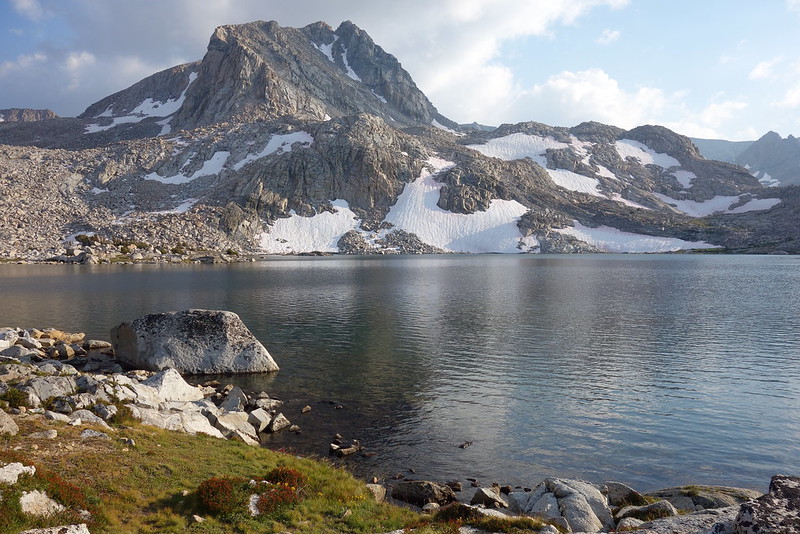 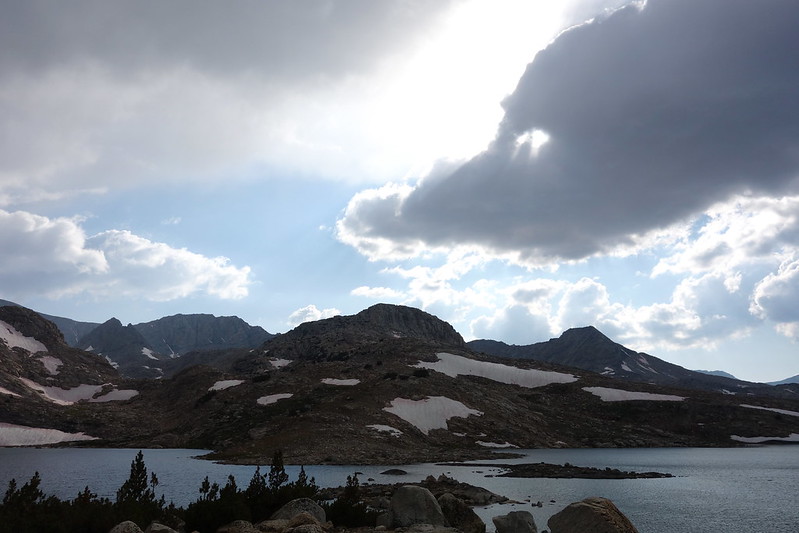 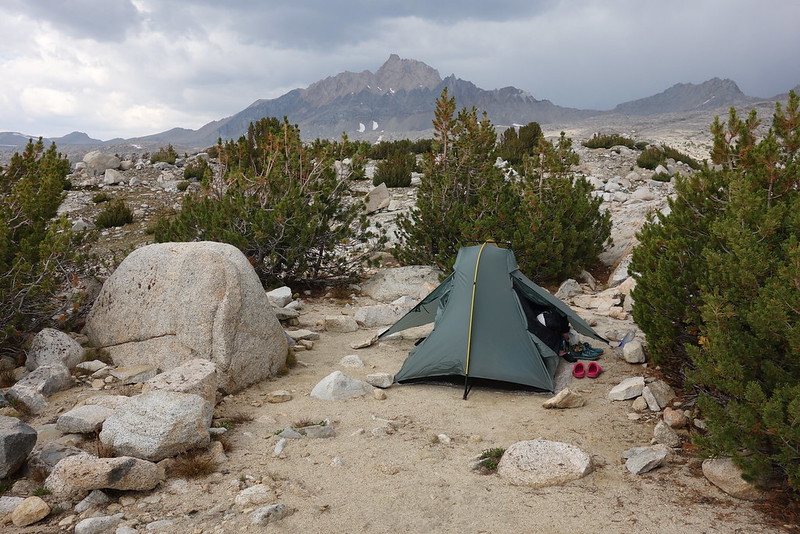 Almost immediately after the tent’s up, the clouds coming over the divide change color slightly—somehow blacker than before—and the nearby peaks get gauzy, like an old, blurred photo.

We rush into the tent, followed by a loud beating rain.

After half an hour, the beating softens to strange, smudged thuds and the light seems different again. Whiter. I peek out and am immediately hit by snow. All the hills are white, as is the surface of our lake. I look back in the tent. “Well…” No need to tell: Krista’s already looking out the other side. She looks back in at me, deadpan, and does a perfect Robin Impression. “I want to see some weather this trip.”

We make dinner in our vestibule as the weather rages around us, then spend the evening looking at pictures from the last few weeks.

It’s easy, when you’re out here, to almost take it for granted. There are always mountains beyond mountains, and so often my focus has drifted to the pain in my shin or silly worries about where to camp. But soon we’ll be at home, and those daily pains will be replaced by longing. And I think of Heather dropping out in Glacier Peak last year. “I guess the thing is that sometimes things are only beautiful”—I should have said most beautiful—“in retrospect.”

I tentatively walk out in the crunching ice down to the lake. The water’s so calm that I can see my reflection. But it’s too cold to stay for long, so I rush back to the tent, where Krista’s waiting. She reaches for my hand. “This has been a really lovely trip.”

One thought on “Back to the Sierra, Day 12: September Snow”