The sun rises at six, and the ice that’s accumulated on our tent overnight starts to melt. The outside cracks, like a tiny glacier coming apart. Inside, water drips like rain onto our sleeping bags. Everything’s soaked. But it’s our last day out, so oh well. We’ll be in a hotel tonight, under thick cotton blankets that weigh more than either of our packs.

I open the tent fly and a stream of icy water spills onto my neck. But outside it’s sunny, bright blue with a thin film of white snow on the distant peaks. So I decide to have a morning walk, maybe up to the Goethe Lakes, a few hundred feet above out basin. 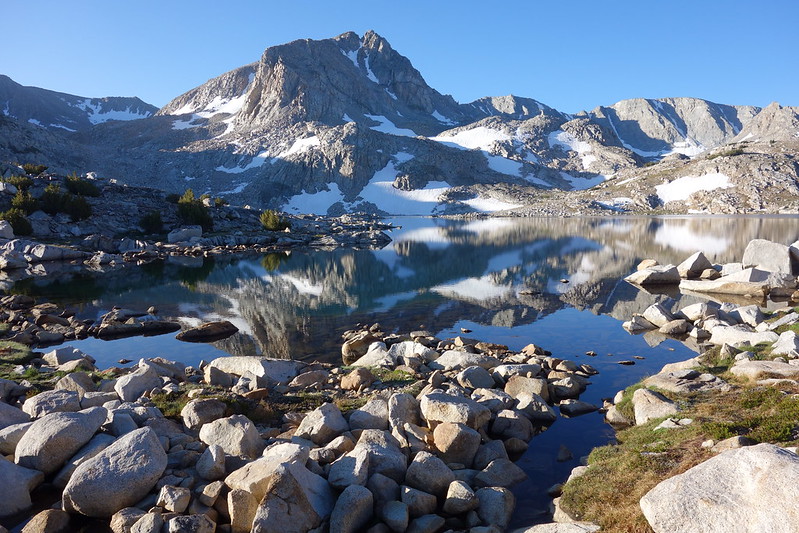 Wending my way around Muriel Lake’s sawtoothed shore, I watch the sun crawl down from Mt. Humphreys to the rest of Humphreys Basin. Then up a minor that separates Muriel from the WAHOO (yes: still all caps) Lakes to the top of the delightfully named Peak 12123. From the top, I can see the whole drainage and the valleys beyond, to the north, where the Sierra gets shorter.

I say a sort of silent goodbye.

From the peak, I scramble down to the Goethe Lakes, the whole time being scolded by busy pikas, all with mouths full of grass, winter food. It’s coming soon up here.

The Goethe Lakes are gorgeous: massive pools of blue, surrounded by snow and ice and rock. Alpine Col’s somewhere up there above. We could climb up, then scramble down to The Keyhole back into the Evolution Drainage. Or we could stay on the ridge to Mt. Lamarck, then cut down to Darwin Bench. Or… 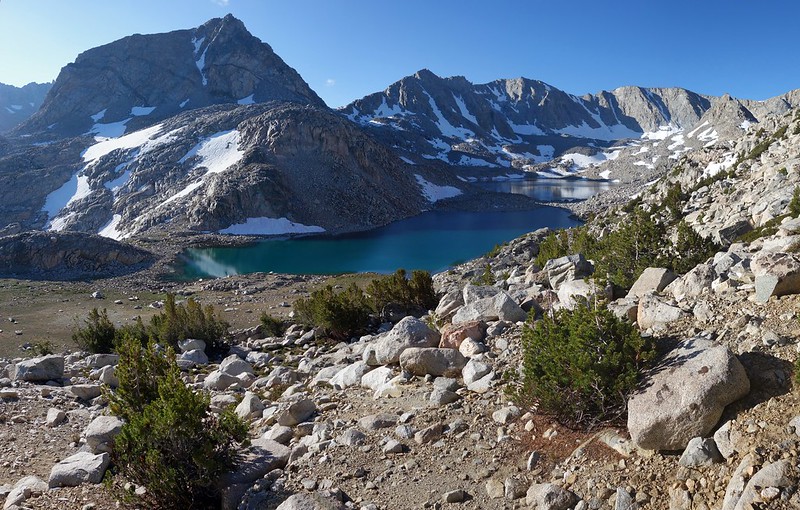 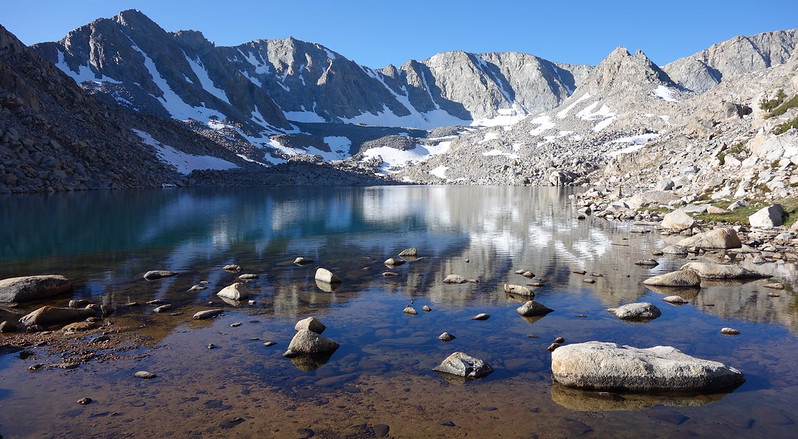 I’ve already been gone for longer than I said I’d be, so I hurry down, through talus and across a few steep, icy slopes to Muriel’s southern shore. The other campers are just waking up, watching the water. 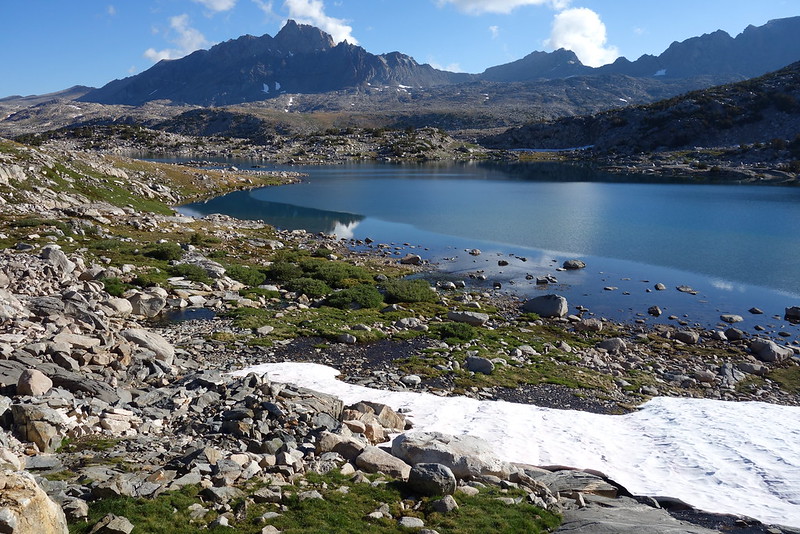 Krista’s already had breakfast when I get back, and she’s brought the sleeping bags out to dry a little before we pack up. It’s starting to snow again up high, so we don’t linger. Soon our backpacks are on, and we’re turning away from the lake, back to Piute Pass. 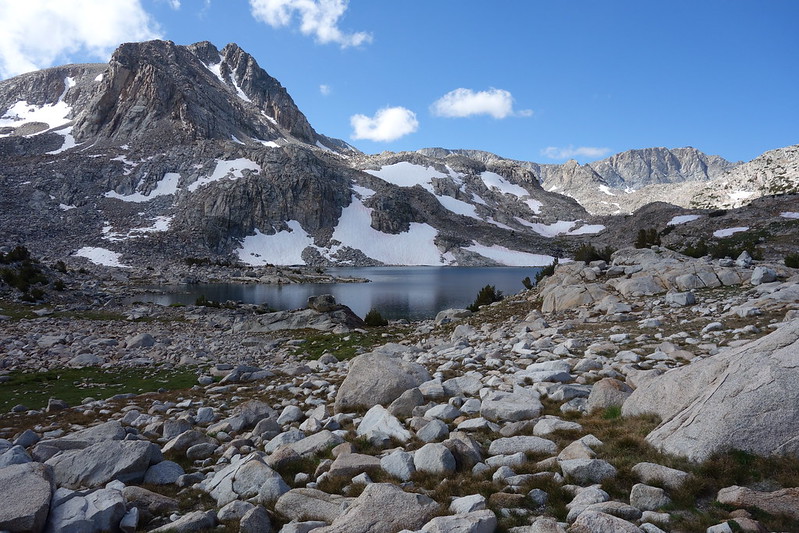 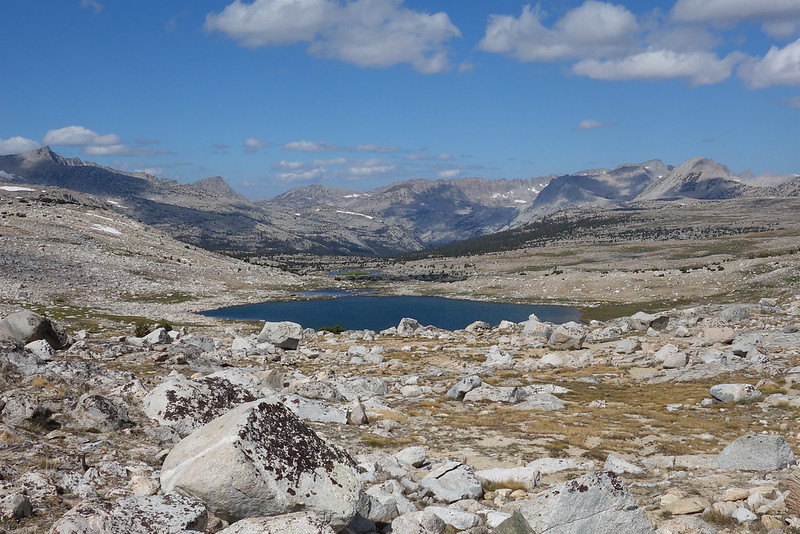 We hit the pass then speed down, back toward the car. We stop for a quick break at Piute Lake, and watch dayhikers stream by. Everyone’s so clean! 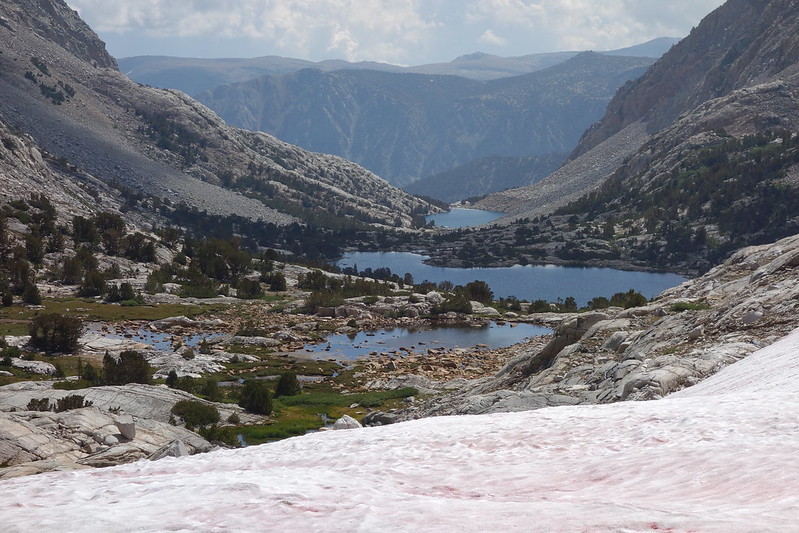 Somehow, we end up both listening to Leslie Hall, synchronized, so that we can bob our heads together. 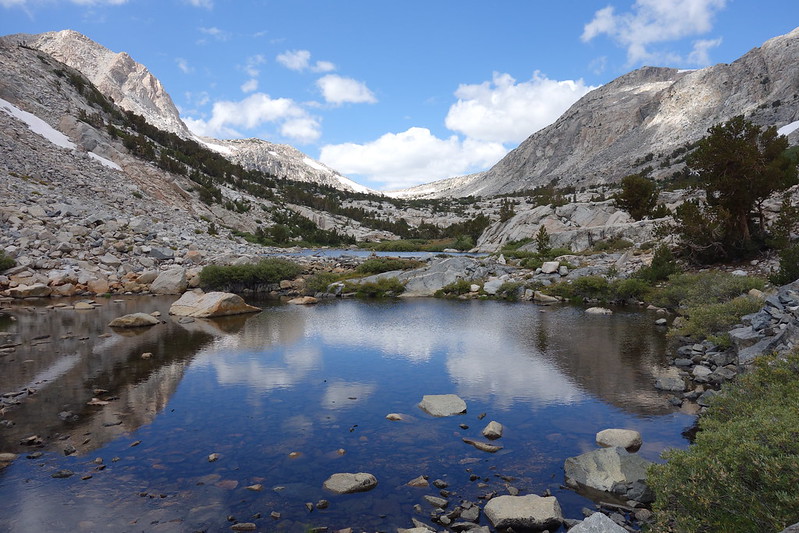 The album’s this lovely mix of hilarious and heartening (“thank you momma for making me gold pants / ones I can’ dance in, make romance in”), the sort of thing I imagine Beyonce making if she were born in Iowa and best friends with Weird Al. We both know all the songs by heart.

We dance down the trail, past tourists and Serious Hikers in Serious Clothes, looking Seriously Unfun. One of my favorite songs comes on, and we come up with a spontaneous routine. I point at Krista’s sparkling gold gaiters, and she preens. I mouth “Shazam,” and she returns “I’m glamorous.” 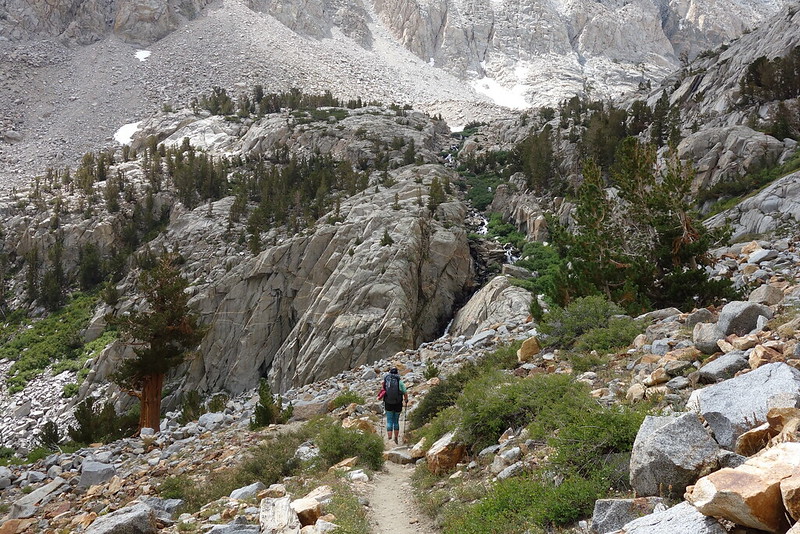 I don’t know how exactly we got here, but it feels like exactly the right way to end this thing.

There’s this David Sedaris story I love, about by chance seeing a spider in his house in Normandy, then following it into a world of spiders, to eventual membership in the American Arachnological Society. He’d always viewed them with benign neglect, until somehow one—he calls her April—just caught his eye:

Often, I’d take out my magnifying glass and stare into the chaos that was her face. Most people would have found it grotesque, but when you’re in love nothing is so abstract or horrible that it can’t be thought of as cute. It slayed me that she had eight eyes, and that none of them seemed to do her any good. They were more like decoration, really, a splay of beads crowded above her chelicerae. These were what she used to grip her prey, and if you looked at her the right way you could see them as a pair of enormous buckteeth. This made her appear goofy rather than scary, though I’d never have said so in her presence.

I don’t know if it’s at all what he meant, but the story’s become important to me, as this sort of beautiful illustration of the unexpected things there are to love, if only you tread gently and look closely enough.

We tend to explain love as an attachment to certain attributes or properties of the beloved. When asked why we love something or someone, we reply with a list of characteristics: I love these mountains for the way light touches those distant peaks, or I love him for his eyes.

But there are at least two troubles with this explanation. One is that, if I can give a sufficient account of loving something—a mountain or person or whatever—based exclusively on the beloved’s attributes—that is, if the attributes I list when asked why I love it completely explain my love for it—then I am logically required to identically love all other things that have those attributes. That’s not necessarily a huge problem when the thing in question is something like a mountain—there is, I’m certain, no upper limit on how many mountains a person can coherently love—but it’s definitely a problem when the thing is something like a person, because many forms of interpersonal love require a measure of exclusivity.

The second, and for my part more problematic, trouble is that, if we love something only for the attributes it currently has, then we should stop loving it when those attributes change. But love often seems essentially extended in time and necessarily resilient to change. I love Krista and will still love her when we get old. I will when we have become very different people than we are now, with lives immeasurably distant from the ones we have now. If that weren’t the case—if love were somehow dulled by grey hairs (or the extinction of hair altogether…)—then we’d question whether it was really love in the first place.

So love can’t just be an attachment to a thing’s attributes. But if that’s not love, what is? My favorite answer is that love is a commitment to a certain way of seeing the things we love, to looking closely enough to see the attributes that make them lovable, even as those attributes shift over time. On this view, what stands behind love is ultimately a commitment to being attentive to the potentially shifting ways in which the thing you love is lovable, to being together with it in time.

That explanation of love also engenders a certain way of seeing the world and our relationships to it. If, just by paying attention, we can generally find things to love, then we must be capable of finding a very large set of things in the world to be lovable.

That seems right to me. I take it to be a central fact about the world that there is more worthwhile in it than one could ever embrace in a single life. And so love is in part a commitment to allowing the things I do embrace, from the broad set of things I could embrace, to be partially determined by what becomes of what I love.

Years ago, when Krista first floated the idea of doing the JMT, it didn’t immediately sound great to me: lots of driving; a bunch of logistics; new gear; daily mileages that, at the time, felt super high… But I went with it because it came from her, and loving her meant—and means—being attentive to the unexpected worlds she might introduce me to.

So I went, we went, and that path led here.

The Leslie Hall album bumps to a close with a song about Gem Sweaters, and we take off our headphones. Krista looks a little embarrassed. “Thanks for listening to my silly album.” I think she’s misspoken. “It’s our silly album.”

We make it down to the dusty parking lot in the early afternoon, and eat a short lunch sitting in the trunk.

I think about some dudes we ran into last week saying how lucky I was to find a partner who’s also into this. But that gets things exactly wrong. We found each other, we’re partners, and because of that we’ve committed to making this world—gold gaiters, mountains, everything—together. 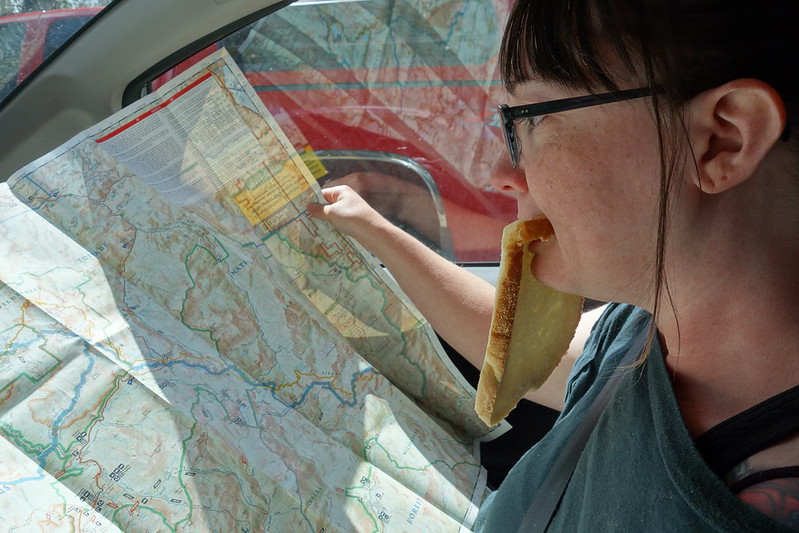 One thought on “Back to the Sierra, Day 13: Love and Leslie Hall”